The British designer was as daring as he was debonair, deploying a brazen mix of colors and patterns that came to define the groovy-glamorous interiors of the Swinging Sixties.
by Marisa Bartolucci
Pin
Share
Tweet
Email 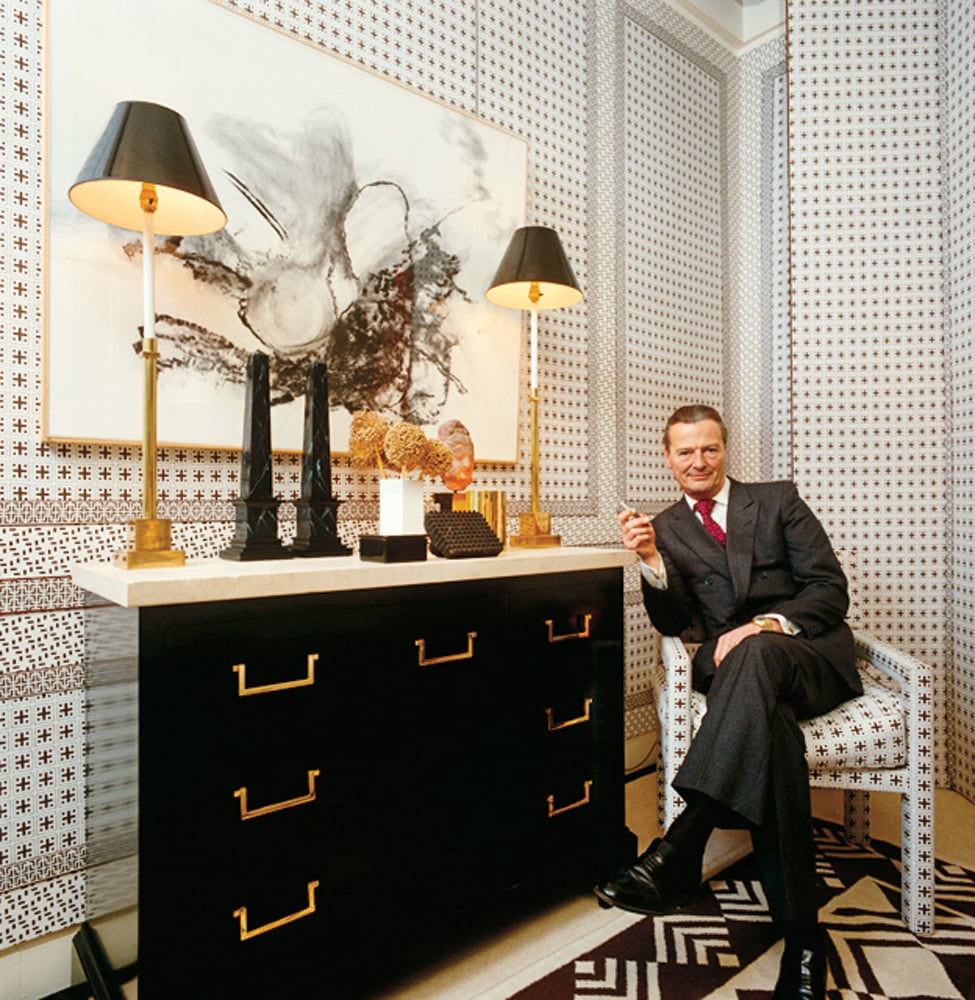 Let there be no doubt about it, suave as he was, with his bespoke suits, slicked-back hair and patrician good looks, David Nightingale Hicks (1929–98) was a committed revolutionary. Composing rooms of arresting opulence through his magisterial orchestration of cacophonous colors and patterns, Italian modern mixed with Louis XV furnishings and counterintuitive plays of scale, he forever rocked the stately world of interior design.

As a zealot of style, he took no prisoners. “Dedication to design means ruthless criticism and losing friends,” he once declared. He was not exaggerating. His wife claimed that he conceived his signature high-gloss brown walls as a result of her throwing glasses of Coca-Cola at him during their alarmingly frequent marital spats. 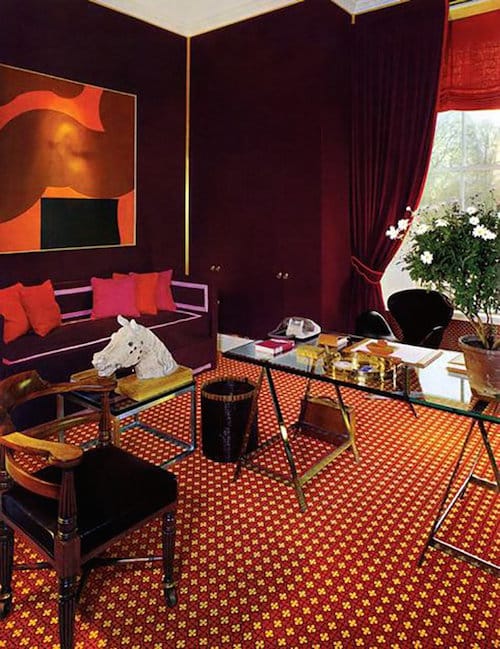 An artistic, charismatic and possibly over-indulged only child of a stockbroker and and a housewife, Hicks was raised in Coggeshall, a picturesque market town in Essex, in Southeast England, and attended Charterhouse, a posh public school. After graduating from London’s Central School of Art and Design and enduring a couple of arid years in the art department of the advertising agency J. Walter Thompson, the 24-year-old Hicks decided it was time to claim his destiny as a decorator of distinction.

He asked his widowed mother to sell her country house and what stocks her husband had left her, so he could launch a decorating career in London. Perhaps because her son had designed her half-timber cottage and its garden when he was a teenager, she was convinced of his genius and willingly assented. 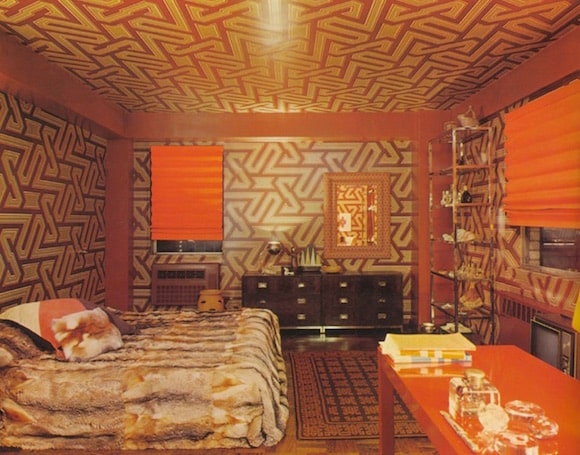 A Manhattan bedroom designed by Hicks in 1971 features his vivid Arabic wallpaper, orange vinyl shades and a lacquered table, which are visually softened by fur bedding. Photo courtesy of Ashley Hicks

Famously, the first thing Hicks did with the money was to buy a silver Jaguar XK120 — the next was to acquire his launching pad, a house in tony Belgravia for himself and his mater. Determined to be pioneering in his decorating style, Hicks forswore all design elements that might link him to the then very “in” English Country House look of John Fowler and his ilk. He made each room shockingly original through bewildering (yet somehow bewitching) color combinations, like a canary yellow upholstered sofa with a frame painted pine green and a drawing room with gray walls hung with pictures all framed with different mounts. No decorator had ever deployed color this wildly before.

Careful to endure that people would see the house looking its best, he didn’t throw a big cocktail party to introduce it, but invited a few guests over at a time so that they could fully take in the effect. When Peter Coats, the gardening editor at British House & Garden saw the rooms, he was so enthralled that he brought over a photographer the next day. Through Coats, Hicks was introduced to the former Mrs. Condé Nast, and she immediately commissioned him to design her apartment. Mrs. Douglas Fairbanks, Jr., followed as a client, and the commissions kept rolling in. 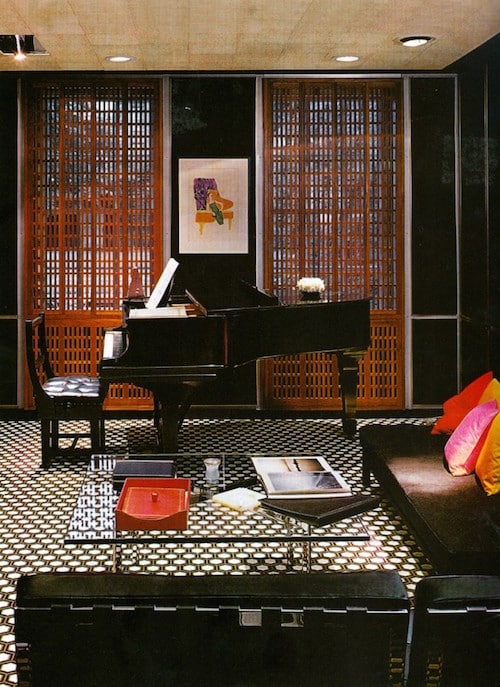 In a multipurpose room, the furniture’s simple shapes and moody colors help accentuate the graphic pattern of the floor. Photo courtesy of Ashley Hicks

By the time he was 25, Hicks had the crème de la crème of London society as clients — and he was being entertained by them! Within a few years, he was courting Lady Pamela Mountbatten, the daughter of Lord Mountbatten, the last British viceroy of India, and the uncle of Prince Phillip, Queen Elizabeth’s husband. They married in 1960 and acquired Britwell, a Georgian pile in Oxfordshire, which became the family seat, design lab and showplace.

The first truly modern interior Hicks ever designed was Lord John Cholmondeley’s penthouse overlooking Hyde Park, in 1967. The graphic boldness of the scheme — brightly colored walls outlined in dark hues and dynamic geometric-patterned carpets — echoed the energy and attitude of the hard-edge painting that was then at the fore. Here, as in all his interiors, he included what he called “tablescapes,” vignettes of artfully arranged objects and artworks that added interest and life to the room. They were soon widely copied. Another landmark interior came in the early 1970s, when he revived Baronscourt, a grand neoclassical house in Northern Ireland, by giving it an entirely contemporary decor. 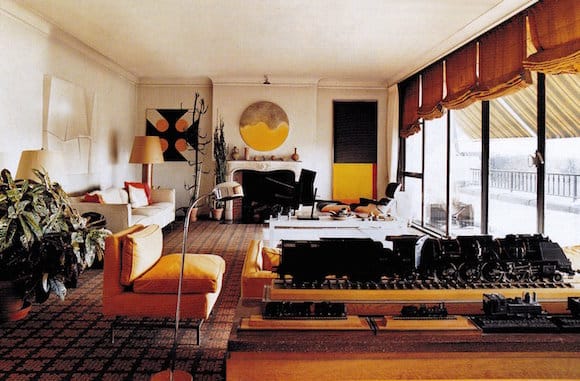 The white walls of a living room by Hicks provide a gallery-like tableau for a collection of contemporary art. Photo courtesy of Ashley Hicks

He was by now branching out into architecture, designing Savannah, a fittingly cubic Bahamian retreat for his family, with the help of the architect Robert Stokes. And in the late 1980s Hicks conceived Vila Verde, a postmodern mansion in Portugal. The owners of that house were so enchanted by Hicks, who seems to have enjoyed almost Svengali-like powers over many of his clients, that they gave him his own room. When Hicks was “in residence” at Vila Verde, the homeowners allowed him the full run of the house to entertain, while they retreated to an upstairs sitting room outfitted with two oculi, where they could discreetly watch the party below.

In addition to his immense creative talent, Hicks had a keen entrepreneurial acumen and vision. While he could have made a fine business simply designing grand homes for the wealthy and titled, he expanded his studio to include offices, boutiques, restaurants, hotels and nightclubs. He had showrooms all over the world, and he embarked on licensing agreements for ranges of vividly hued, geometric-patterned sheets and towels, clothes, umbrellas and bags. 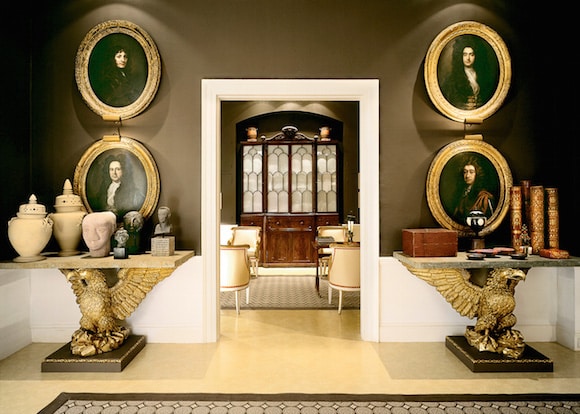 Hicks’s own apartment in Piccadilly, London, shows his clever use of “tablescapes.” Photo courtesy of Ashley Hicks

By the 1980s, however, Hicks had grown tired of his manic work life, which had him flying all over the world in the 1960s and ’70s. He increasingly spent his time in Oxfordshire, where he cultivated extraordinarily elaborate gardens, designed jewelry and supervised the construction of the Grove, a two-story garden pavilion on the Britwell estate, where he and his wife moved after their children had grown.

With the years, and in failing health, Hicks’s thoughts turned to mortality. Unwilling to entrust his funeral arrangements to others, whom he deemed unequal to his sense of style, he fussed over the elaborate details for several years down to the design of his casket. But there was one element regarding his end that he could not work out properly — a well-proportioned pyramid to serve as a gravestone. So he left the task to his son Ashley, who proved up to the challenge and is today a celebrated interior designer in his own right. And so, by the way is his youngest daughter, India. That familial legacy, too, no doubt was part of his design.