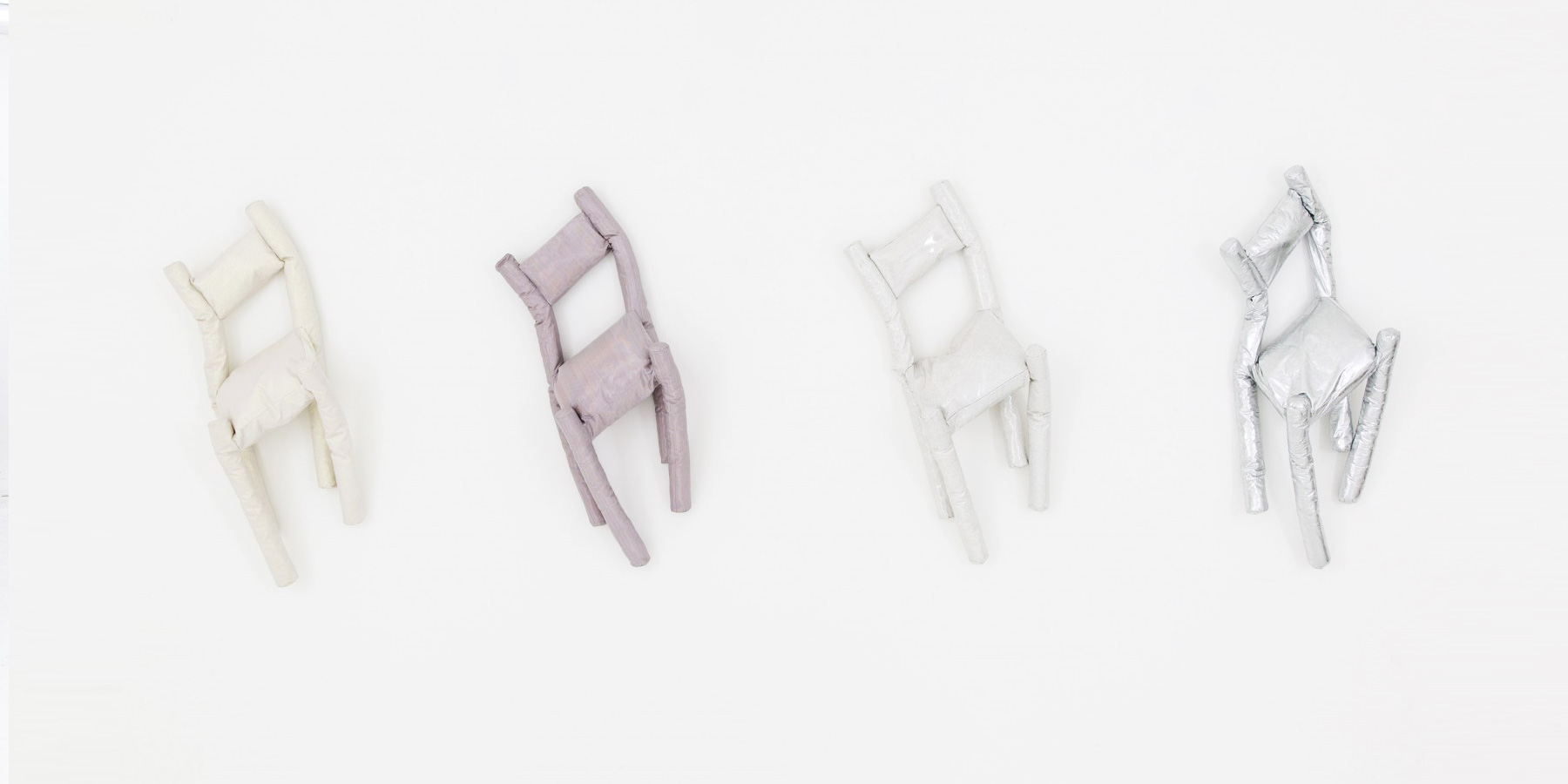 For her first solo exhibition in Miami, ascendant design star Katie Stout offers fresh, and sometimes fluffy, takes on the most quotidian of objects — transforming the world as we know it into a surreal playground of plush furniture and technicolor hardware. 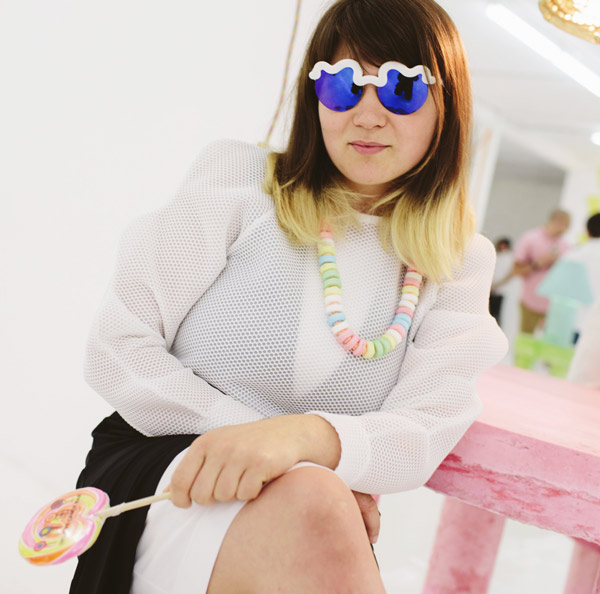 In my personal work, I don’t make the distinction between art and design,” says Katie Stout, whose exhibition of dubiously functional furniture and lighting, “Docile/Domicile/Dandy,” is on view at Miami’s Gallery Diet through June 13. A rising star in the design world, the Maine-born, New Jersey–raised designer completed her BFA in furniture design at the Rhode Island School of Design in 2012 and then moved to Brooklyn, where she continued to ply her craft while working as the director of New York design mecca Johnson Trading Gallery. She was soon tapped by art-world bad boy Bjarne Melgaard to create the freaky furniture for his transgressive installation at the 2014 Whitney Biennial; more recently, she won Ellen DeGeneres’s Design Challenge, a reality TV competition with a $100,000 top prize, which aired on HGTV earlier this year.

From sculptural lamps to funky rugs, Stout’s pieces very often result from creative collaborations. “I like working with other people who have a similar vision and expectation for something to be well done,” she says. “I mostly work with my friends who are experts in a craft that I’m not.”

Among her contemporaries, Stout might be grouped with the so-called Memphis revivalists, who are known for re-imagining the garish, over-the-top Memphis Group aesthetic originally pioneered in the 1980s by Ettore Sottsass. Stout’s approach is to simultaneously reduce and exaggerate her forms to sculptural and oftentimes comical effect. And while she cites Maurizio Cattelan and Yayoi Kusama as influences, her work also seems to contain elements of Claes Oldenburg and Coosje von Bruggen’s oversized soft sculptures of everyday objects, as well as the emphatic feminism of Méret Oppenheim‘s fur-covered tableware and the cartoonish charm of Erwin Wurm‘s sculptures. 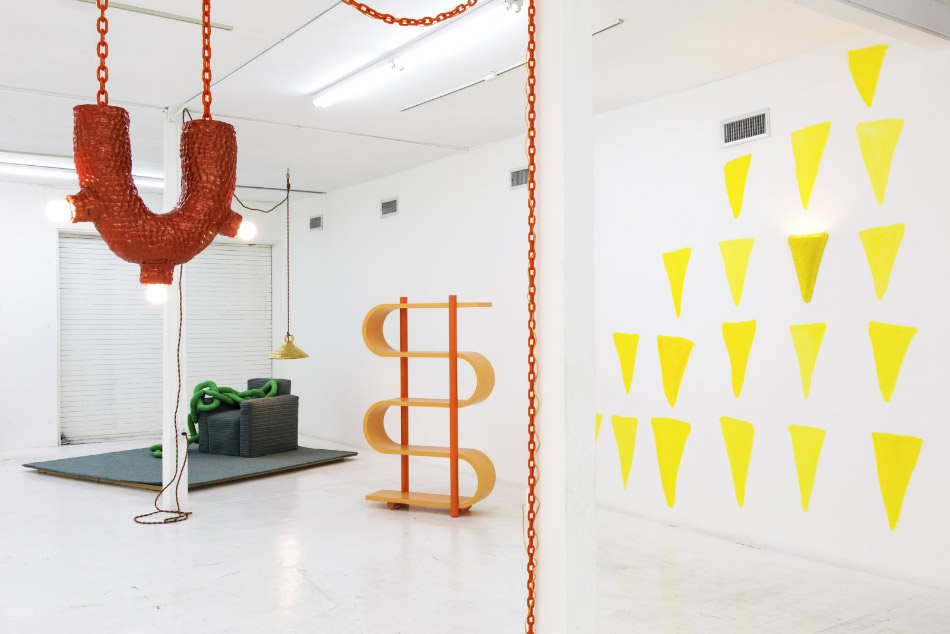 On view at the gallery, Stout’s exhibition “Docile/Domicile/Dandy” re-casts a quotidian domestic interior as a funky fun house of color and form. 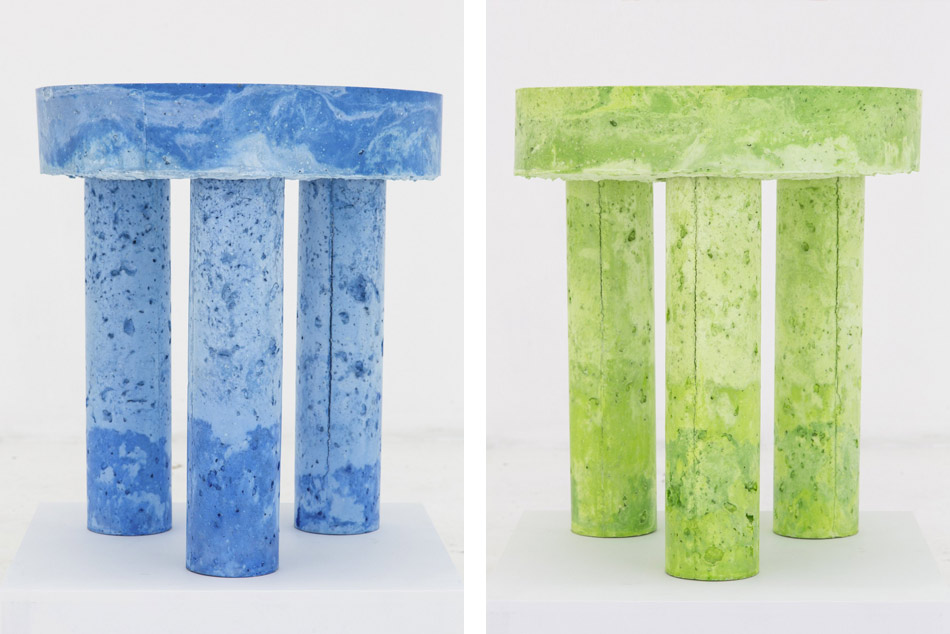 Her “Pulp Tables,” 2015, made from Sculptamold, resin and wood, transform the idea of a basic coffee table into a whimsical, tie-dyed affair. 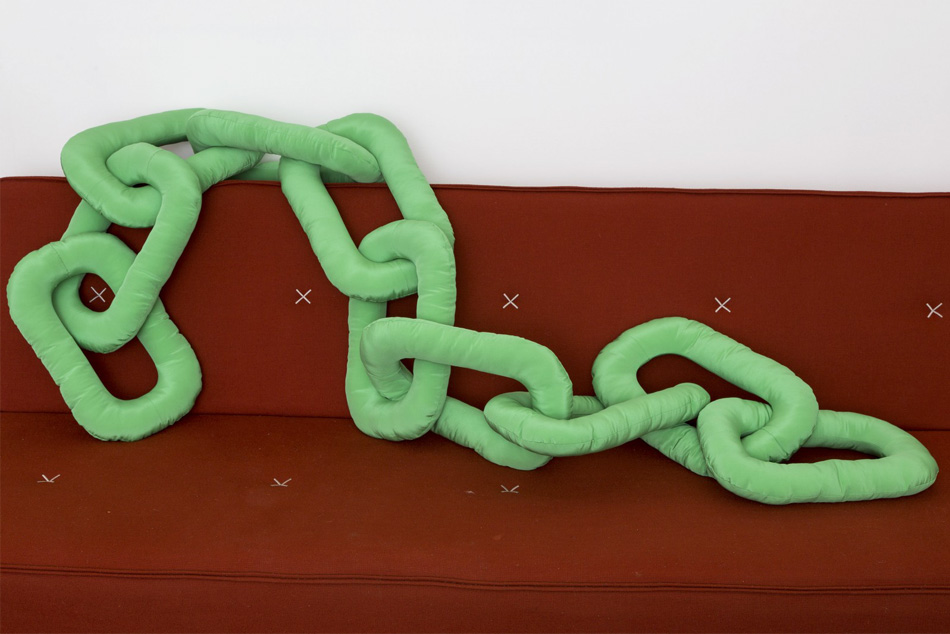 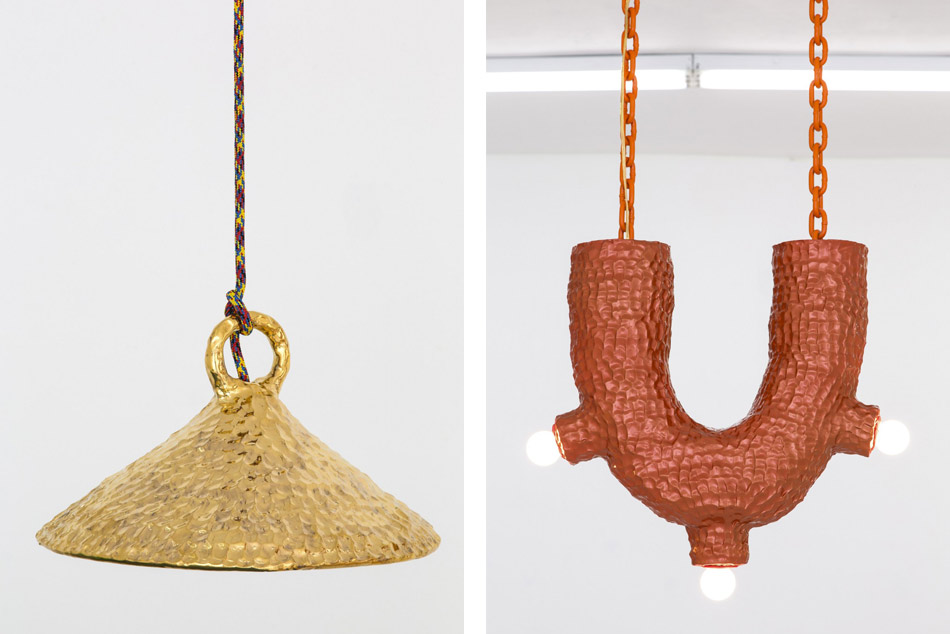 Examples of Stout’s ongoing partnership with ceramist Sean Gerstley, these pinched-ceramic pendant lamps sport a variety of glazes, from metallic to bubble-gum bright. At left is Gold Pendant, at right is U Lamp. 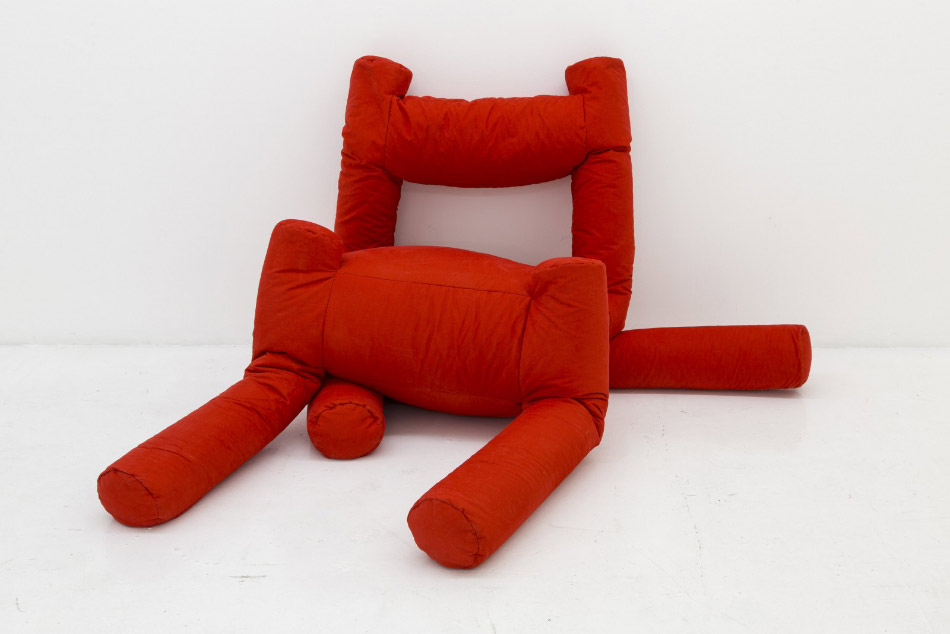 Bean Bag Chair, 2015, slouches against the wall like a sad pet. 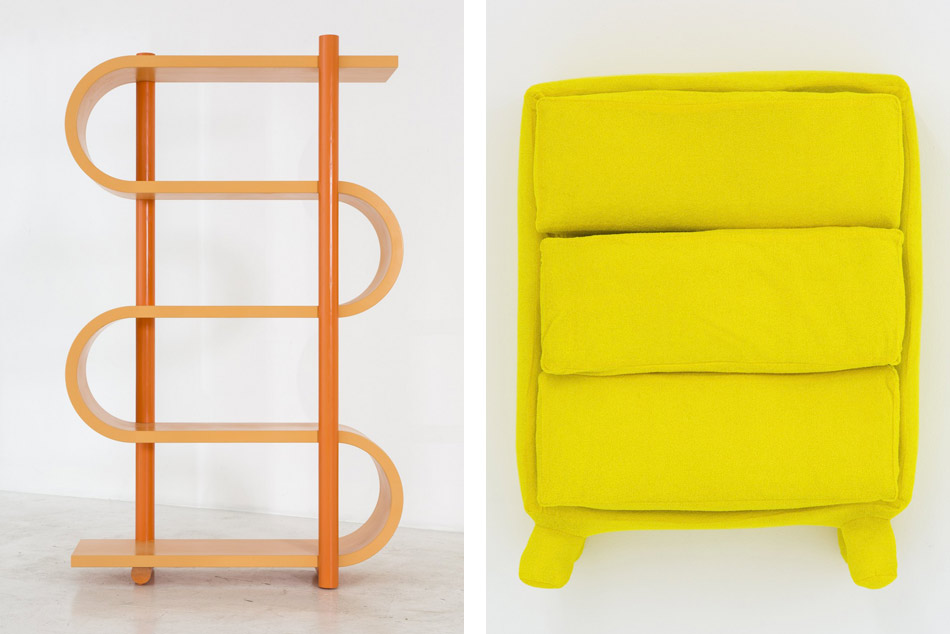 From left: Squiggle Shelf, 2015, is made from Baltic plywood, oak and lacquer, while the softer Stuffed Dresser, 2015, is comprised of silk moiré, terry cloth and foam. 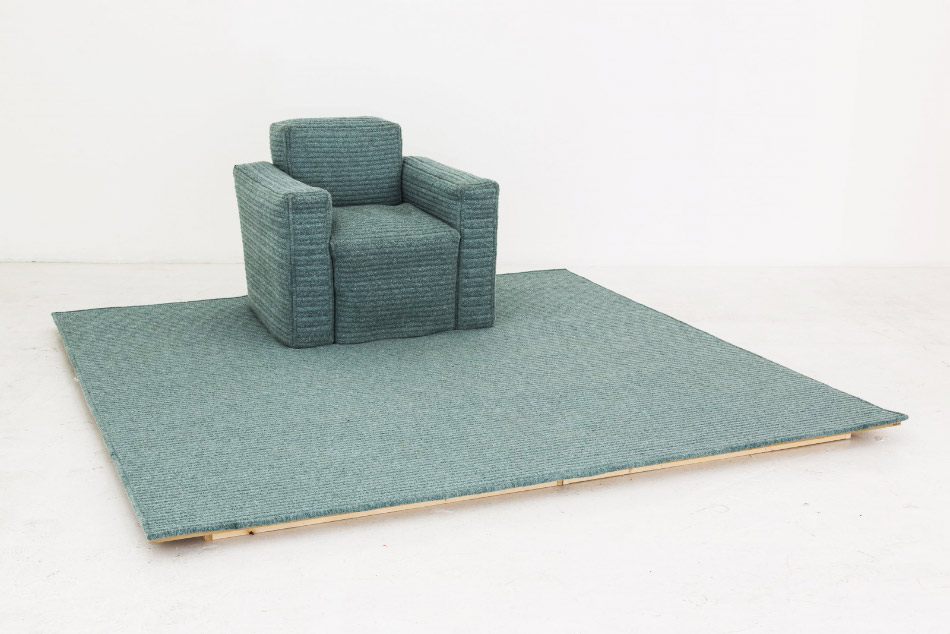 The Colonial Mills factory in Pawtucket, Rhode Island, manufactured the braided-rugs that comprise Braided Chair Rug, 2015; Stout has worked with the outfit — “re-imagining the iconic American craft,” as she puts is — since her RISD days.

Stout has a gift for teasing apart the elements of familiarity and comfort — traditionally one and the same — to weird and wild effect. 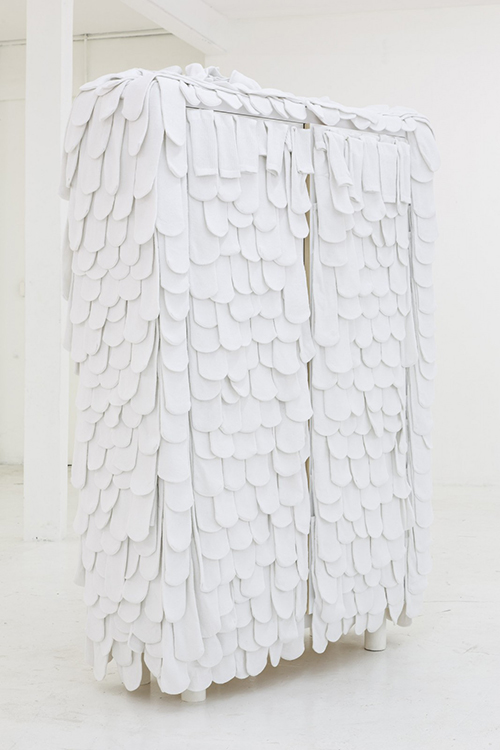 Stout’s favorite piece in the show is Sock Cabinet, 2015, which she made on-site in Miami. “Finding a wholesale sock dealer in Miami was really easy,” she says, “so I guess I could say I was also inspired by the city.”

At Gallery Diet, Stout’s wall-mounted “Sad Chairs” offer a new spin on her “Stuffed Chairs,” an ongoing collection of overstuffed plush pieces that look something like baby giraffes taking their first steps, which she continues to create for the New York store Project No. 8. “They are inspired by the Shaker chairs I grew up with,” she says. “My mother had a strong appreciation for American craft.” Along with the languidly splayed Bean Bag Chair, these bulgy, slouchy and otherwise out-of-sorts plush works — sewn by her friend, fellow RISD student and fashion designer Zev Schwartz — resemble nothing so much as a misfit band of children’s book characters. Her vibrant, pinched-ceramic lamps, an ongoing collaboration with Philly-based ceramicist Sean Gerstley, on the other hand, are generously glazed to evoke hard candy, likable if not outright lickable.

Ultimately, there is no denying Stout’s masterful command of materials and form, particularly her gift for teasing apart the elements of familiarity and comfort — traditionally one and the same — to weird and wild effect. The Sunny D–yellow Squiggle Shelf, something like a pair of dollar signs made of mac-and-cheese, is the most Memphis Group–reminiscent piece on view; inspired by “clothes piles and shingles,” the laugh-out-loud-funny Sock Cabinet is a wardrobe bedecked in tube socks that might vaguely resemble dragon scales but for their uniform whiteness. “It’s super important to be able to take a silly idea seriously,” Stout reflects.

The overall effect of the exhibition is a quasi-domestic setting, a kind of fun house rejoinder to Giorgio de Chirico‘s and Salvador Dalì‘s alien landscapes. Where canvas-based surrealism invariably feels desolate, there is something delightful about seeing these objects in their full three-dimensional glory, in a real, navigable space.