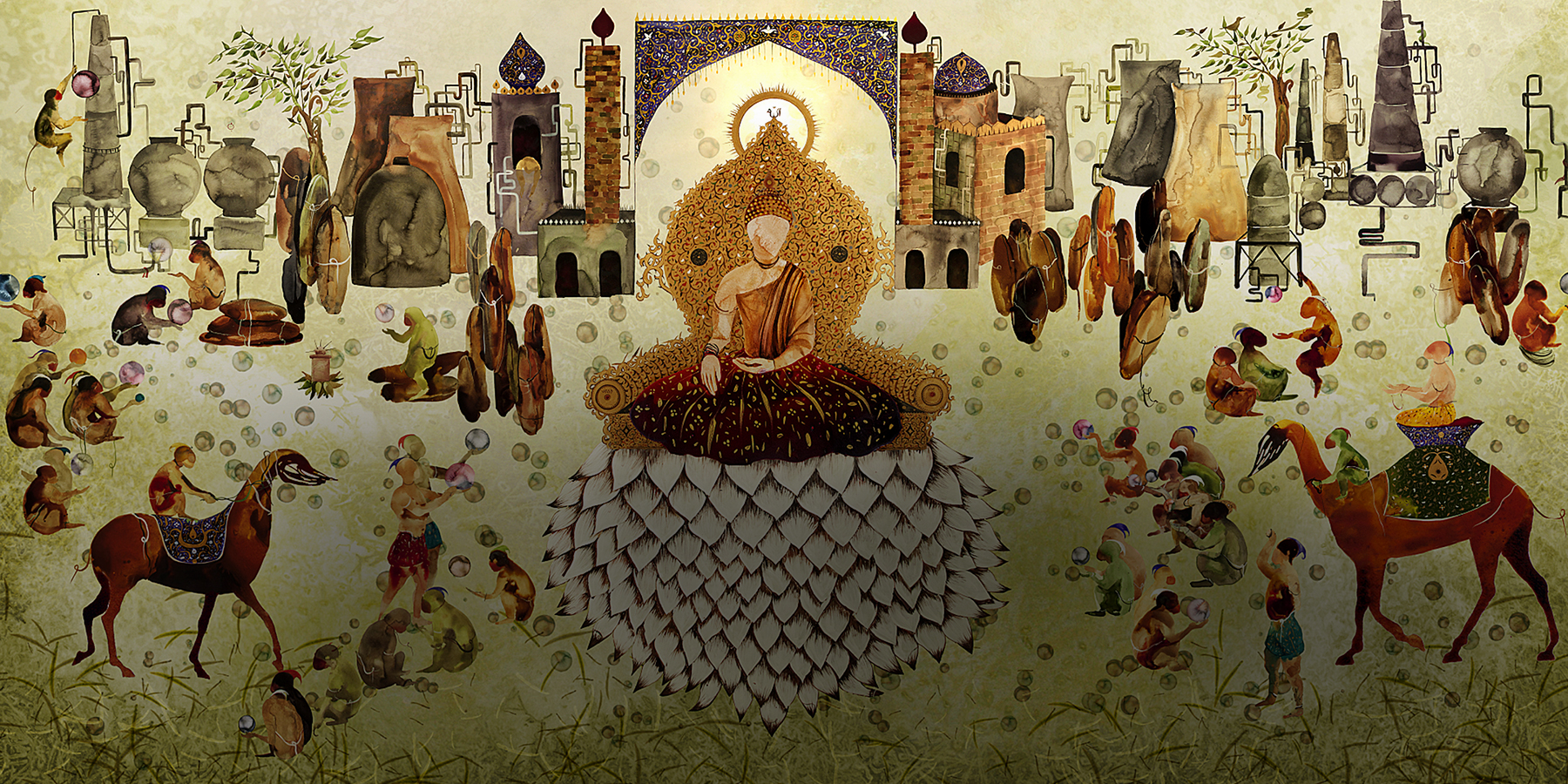 “It’s impossible to be Iranian and not political," says the artist, whose textured, chaotic scenes are as seductive as they are rich in meaning. 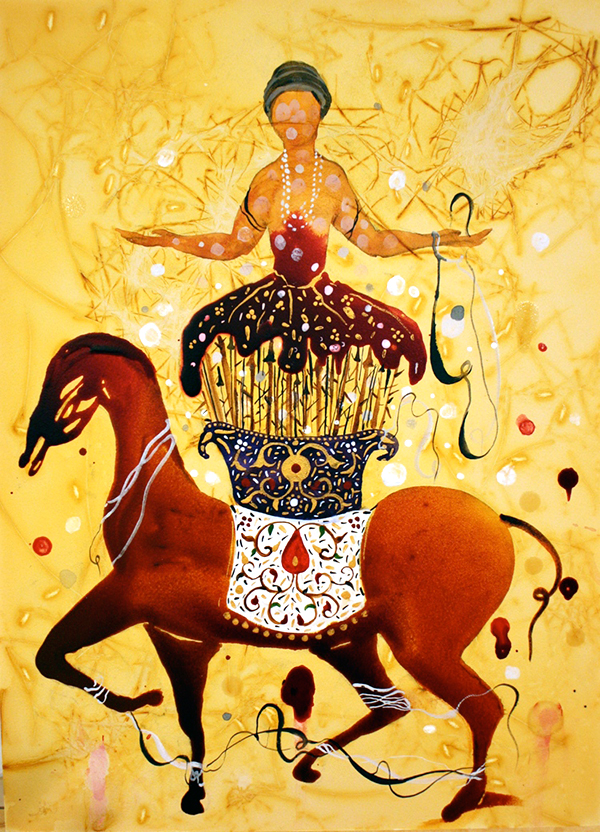 Represented in New York by Leila Heller Gallery, Tehran-born artist Shiva Ahmadi has work on view through April 2 in “Global/Local 1960–2015: Six Artists from Iran,” at New York University’s Grey Gallery. Above: Untitled 14, 2012, is from the artist’s “Throne” series. Top: A still from the video animation of her painting Lotus. All photos courtesy of the artist and Grey Art Gallery, unless otherwise noted

Artist Shiva Ahmadi grew up in Tehran hating the Persian miniature paintings that hung all over her house and everybody else’s in the Iranian capital. “To me, it was kitsch and ugly and old,” Ahmadi recalls.

In 1999, she left Iran to join her older sister, Shadan, in Michigan, where she went on to receive her MFA in drawing from Wayne State University in 2003. When the United States invaded Iraq that same year, Ahmadi was flooded with traumatic childhood memories of the 1979 Iranian revolution, which was followed by eight years of war between Iran and Iraq. Haunted by these recollections, she found comfort in looking anew at the gemlike decorative tradition of her homeland. “I became an obsessed student,” says Ahmadi, who began frequenting the Islamic galleries at the Detroit Institute of Arts and the Metropolitan Museum of Art, in New York, and soon earned another master’s degree, this one in painting from the Cranbrook Academy of Arts, in Bloomfield Hills, Michigan.

For her ominous allegories of despotic rulers and mindless followers, created over the past decade, Ahmadi, now 40, has co-opted the seductive allover patterning and rich palette of the Persian miniatures she once rejected. “I like to make the surface look very colorful and vibrant,” she says. “I use it as a tool to deceive and get people to pay attention to the story hidden in there.” For instance, in her painting Lotus — shown in her 2013 exhibition “Apocalyptic Playland” at the Leila Heller Gallery, which has represented her in New York since 2005 — stylized, hybrid figures painted in saturated washes of reds, golds and browns look almost like an ornamental pattern laid over a mottled green landscape framed by the architecture of mosques and nuclear power plants in the distance. On closer inspection of the work, however, one realizes that these faceless, monkey-like creatures are holding up round grenades, offering them toward a central Buddha figure, who is himself crowned with a turban and presides over the scene from a giant white lotus blossom. His featureless face is streaked with blood-red lines, and he balances a bomb in one hand. 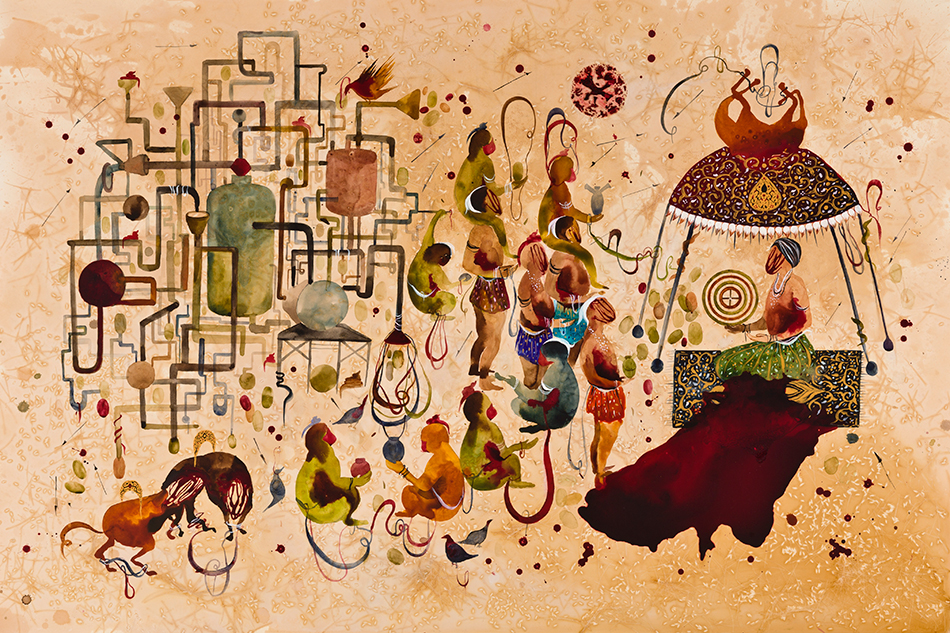 Pipes, 2013, is in the collection of New York’s Metropolitan Museum of Art 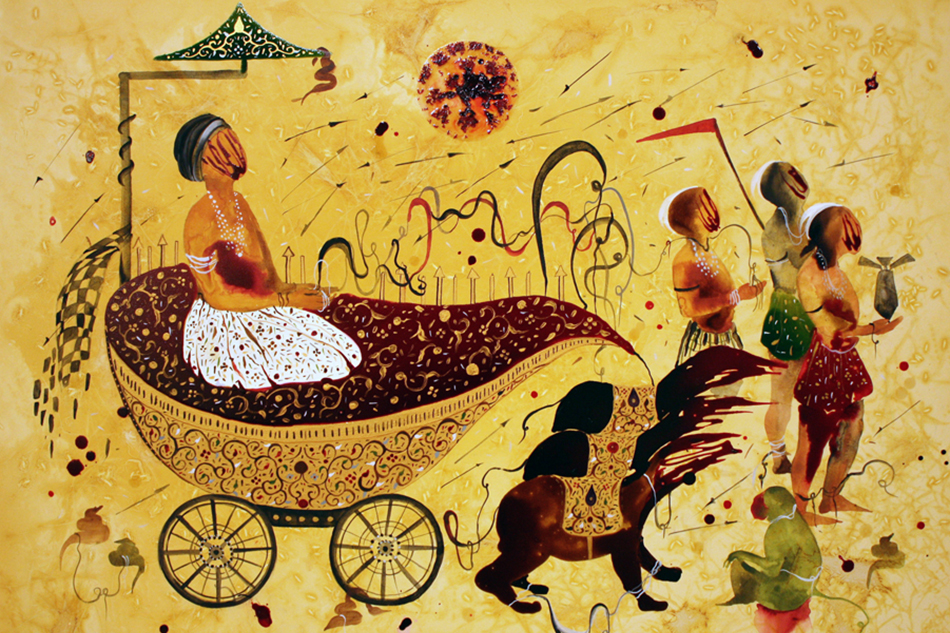 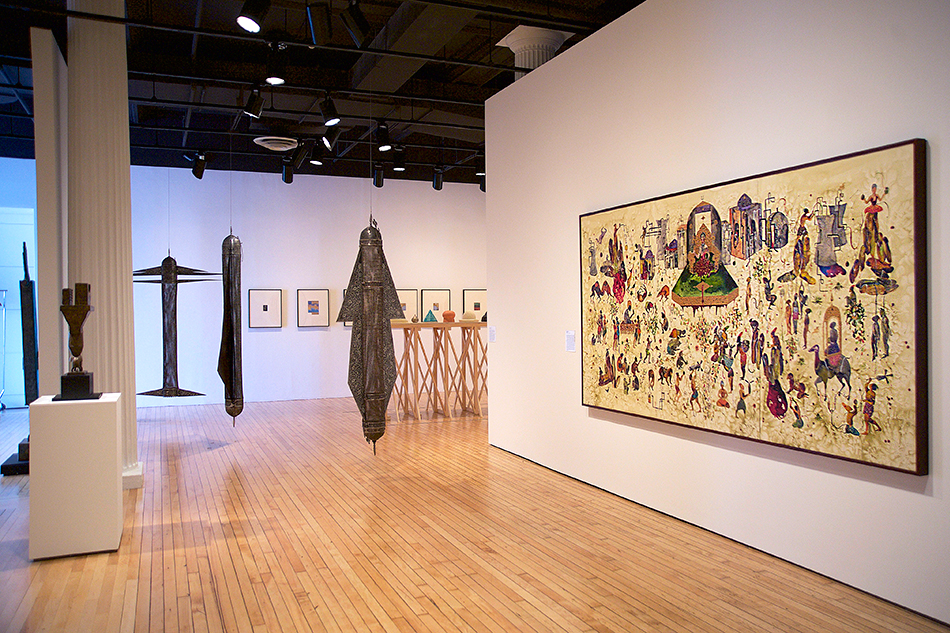 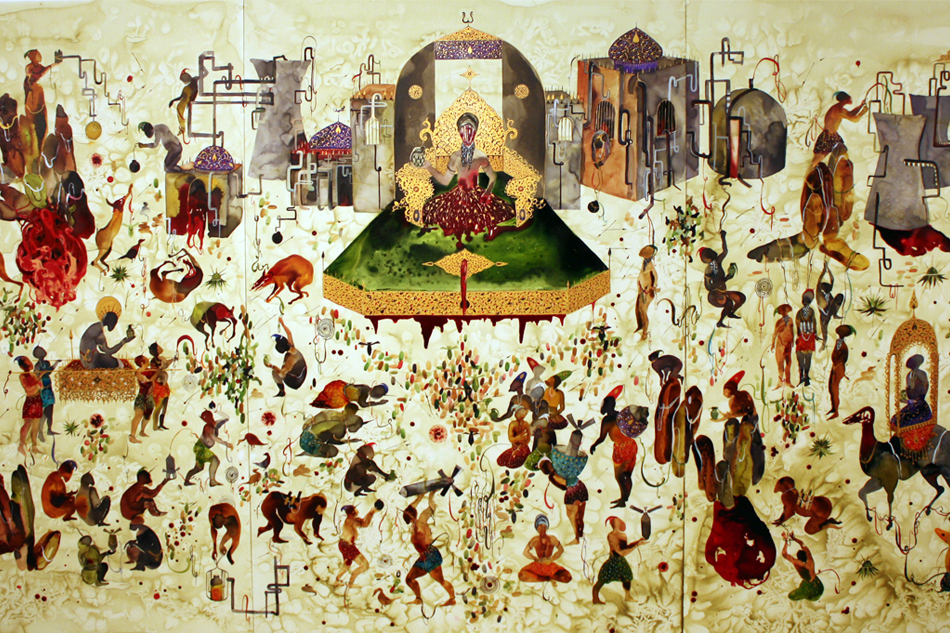 Safe Haven is among the holdings of the Museum of Contemporary Art, Los Angeles 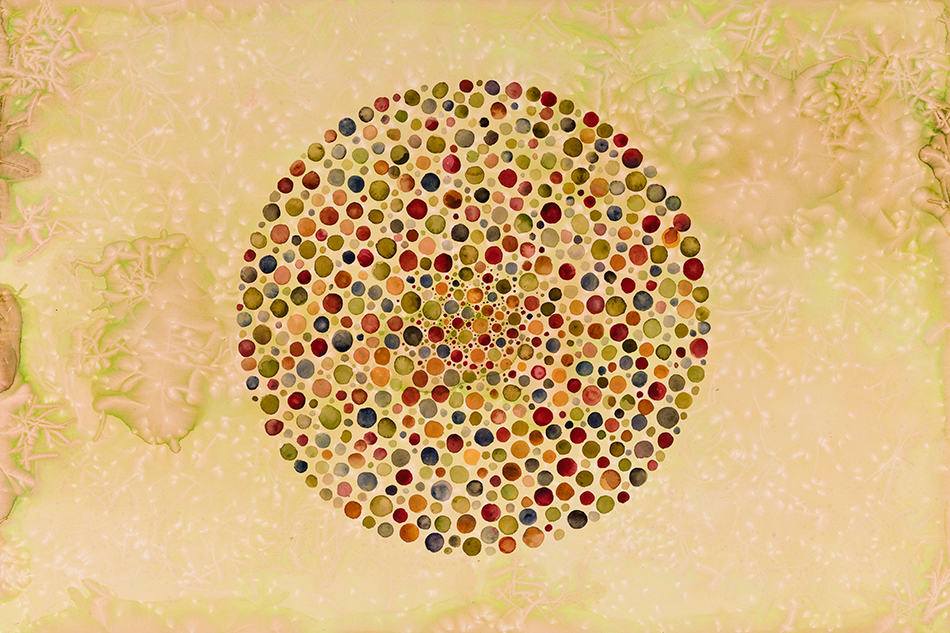 Circles, 2013, is available on 1stdibs through Leila Heller Gallery. 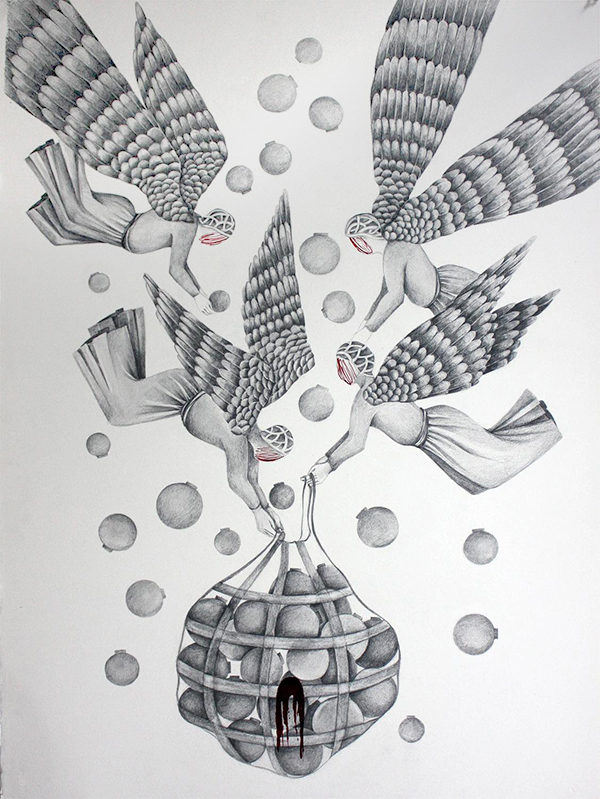 Untitled 5, 2014, is part of Ahmadi’s recent series of graphite and ink drawings. Courtesy of the artist and Leila Heller Gallery

“It’s impossible to be Iranian and not political,” says Ahmadi, whose work is influenced by the abuses of power she sees in both the East and the West. Over the course of her life, she has witnessed the toll of years of economic sanctions on Iranian citizens, including her parents, who remain in Iran. “Whoever gets into power,” she says, “they get the bomb in their hands and just play around with it, with no regard for people’s lives.”

In an animation Ahmadi made based on Lotus that was commissioned by New York’s Asia Society — which mounted her first solo museum show, in 2014 — the bombs begin as bubbles that the figures play with until arrows enter the scene and cause the idyllic landscape to morph darkly. “With animation, I have a little bit more time to tell the story from beginning to end,” says Ahmadi. That video, along with paintings acquired by the Met and the Museum of Contemporary Art in Los Angeles, can currently be seen in “Global/Local 1960–2015: Six Artists from Iran,” on view at New York University’s Grey Art Gallery through April 2. (Established septuagenarian painter and sculptor Parviz Tanavoli and thirtysomething Barbad Golshiri, who works in a variety of media, are among the other featured artists.)

Ahmadi was drawn to storytelling at an early age by the hellish tales her religious teachers made up about what would happen to girls who showed their hair or missed prayers. “When I grew up and realized that none of these things were true, a fascination stayed with me for religious stories and how people in power use them to control generations,” she says. A recurring element in her paintings is arabesque lines that scroll from the hand of a ruling figure or dance independently across the surface. “It’s a rope, it’s a leash, it’s something that controls the whole scene,”Ahmadi says of this abstracted calligraphic element.

An excerpt from Ahmadi’s Lotus animation, which New York’s Asia Society commissioned for the artist’s first solo museum show, in 2014 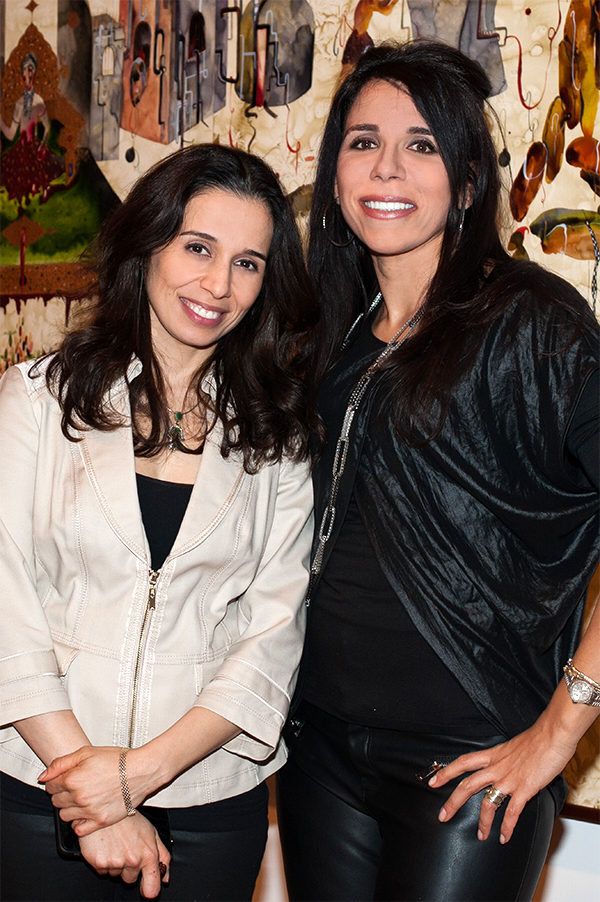 Ahmadi (left) poses with her sister, Shadan Ahmadi, at the reception for “Global/Local 1960–2015: Six Artists from Iran.” Photo by Nicholas Papananias

Working in watercolor, ink and acrylic on Aquaboard, Ahmadi starts with washes of color over which she pours dry rice, hair and salt. “They absorb the paint and push the water outward, creating a beautiful texture and a chaotic scene,” she explains. Shaking off the dried materials, Ahmadi then uses a brush with ink and watercolor to delineate her figures, responding quickly and improvisationally to the fluidity of media that defy careful control.

As a counterpoint to the quick decision making of the gestural paintings, Ahmadi has recently completed a large body of crisp graphite drawings on paper, including one of winged angels trying to collect grenades in a basket even as the explosives levitate and float away, looking like nothing so much as champagne bubbles. She will exhibit these in a solo show at the Charles B. Wang Center at Stony Brook University in March.

Ahmadi, who left Michigan last year to teach at the University of California, Davis, has recently begun making ceramics that she plans to include in her next exhibition at Leila Heller in the spring of next year. Working in that medium brought back memories of accompanying her engineer father to construction sites, where she would find plaster and clay to play with and fashion into dolls and toys. “My father was needed because there was a lot of destruction and rebuilding that had to be done,” says Ahmadi, whose mother is a doctor and tended to the victims of bombings throughout the artist’s childhood. “They were constantly trying to repair the destruction, whether it was to a landscape or a person.”

For Ahmadi, working in ceramics feels like coming home. “Ceramic is clay, and clay is the land,” she says. “And the land is what I am worried about all the time.”