A Most Stylish Street Fair 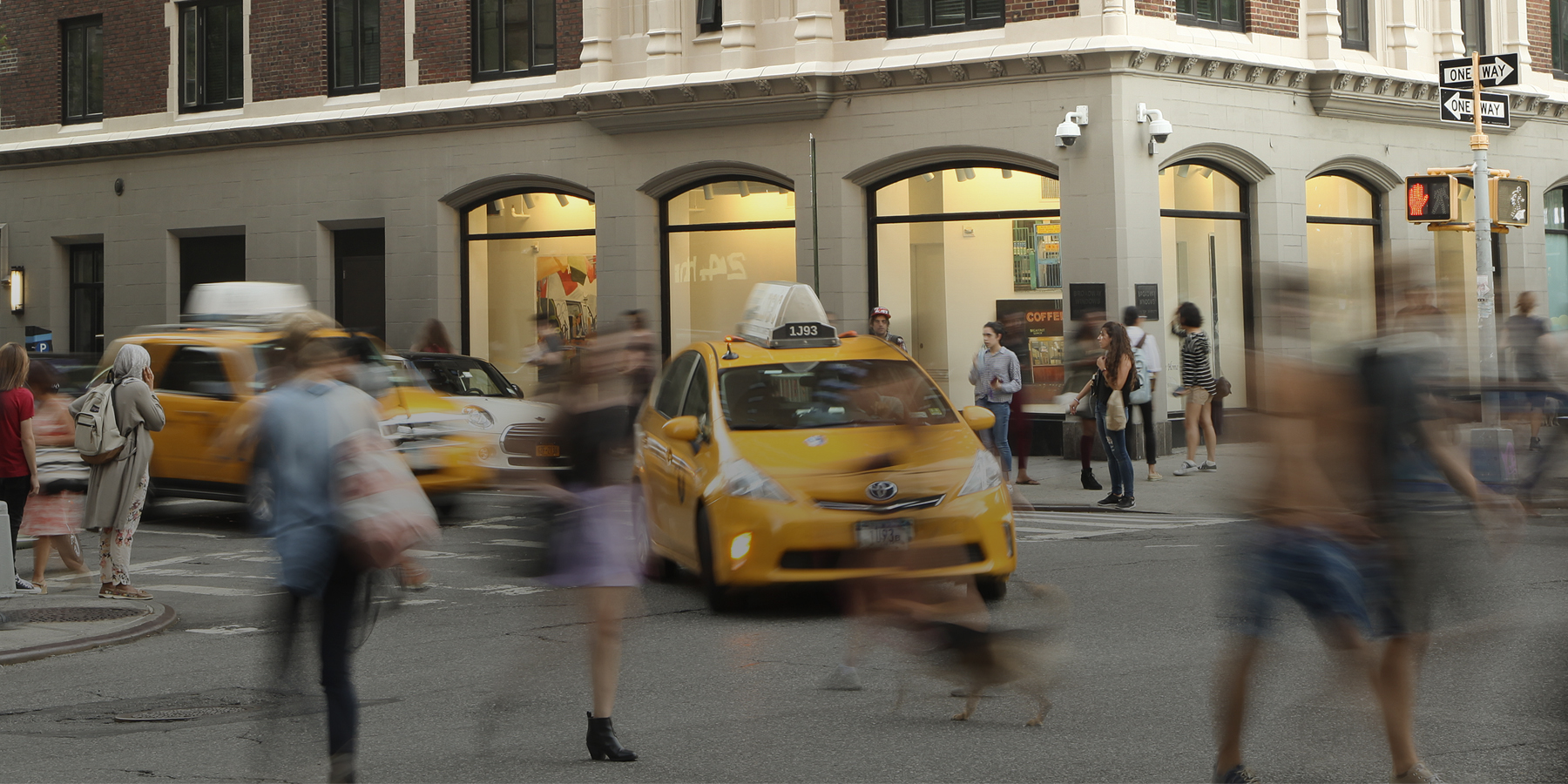 It’s time again for On 10, an open-house celebration of the top-tier galleries that line New York’s East 10th Street. 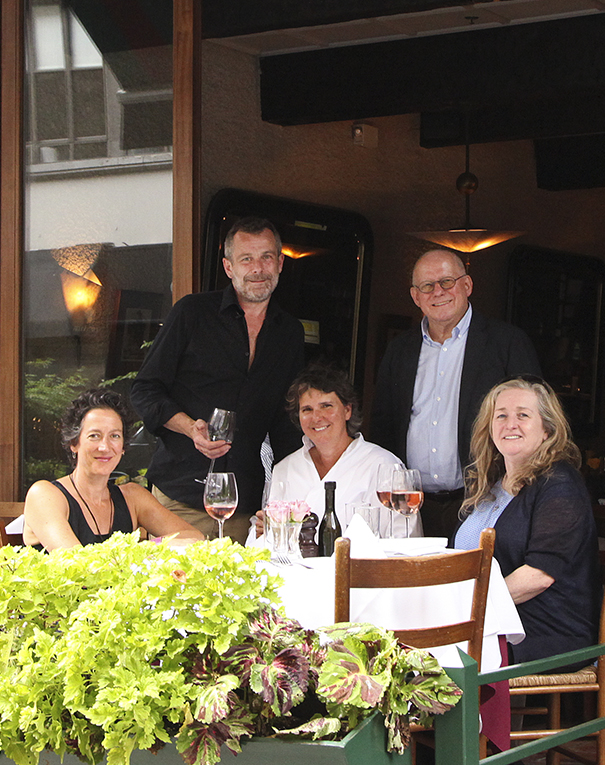 September 14, 2015The 1stdibs dealers participating in On 10 meet for a drink at Il Cantinori, a mainstay of the neighborhood’s food scene and the last stop on the event’s tour. Clockwise from top left: Benoist Drut of Maison Gerard, Bernd Goeckler, Chantal O’Sullivan, Kim Hostler and Juliet Burrows.

It’s like ‘back to school’ for grownups!” exclaims Benoist Drut, of the New York gallery Maison Gerard, when describing the On 10 event that will take place this Wednesday, September 16, between 6 and 9 p.m. On that evening, seven of the world-class galleries and antiquaries located on 10th Street between University Place and Broadway will open their doors to preview their fall offerings. In addition to refreshments, each of the participating dealers will present a special window display.

“It’s a beautiful event,” says Drut, who explains that it is inspired by a similar annual fête organized by the Carré Rive Gauche in Paris. For its part, Maison Gerard, which specializes in Art Deco and contemporary design, is planning to showcase in its window a Franck Evennou side table and pieces by three young artists who recently joined the gallery’s ranks.

“It’s a happening thing,” confirms dealer Bernd Goeckler, known for 20th-century and contemporary furniture and objets d’art. “All the decorators in town come and talk about what’s new. It’s always an interesting crowd.” Goeckler will show a Hervé Van Der Straeten Astrolab chandelier made of iron and crystal that he notes is particularly interesting for how it combines “a very crude material with a very fine material.”

“It’s the opening of the season for us,” says Chantal O’Sullivan, owner of O’Sullivan Antiques, which specializes in English and Irish Georgian furniture. The shop will present a 19th-century Regency gilt mirror featuring an array of exotic ebonized motifs: a pair of lion heads, two crocodiles and a boar-hunting scene. Kim Hostler, who with her wife, Juliet Burrows, runs the aptly named gallery Hostler Burrows, notes that “the block-party aspect and the sense of collaboration, support and camaraderie really do make it special.” Visitors to their gallery, which deals primarily in 20th-century and contemporary Scandinavian design, will be greeted by a ceramic black basket sculpture by one of Hostler’s favorite contemporary artists, Finnish ceramicist Kristina Riska.

In short, it’s a night for dealers, collectors and design aficionados to convene and bid farewell to the summer in style. Sponsored by 1stdibs, the popular event is now in its third year. 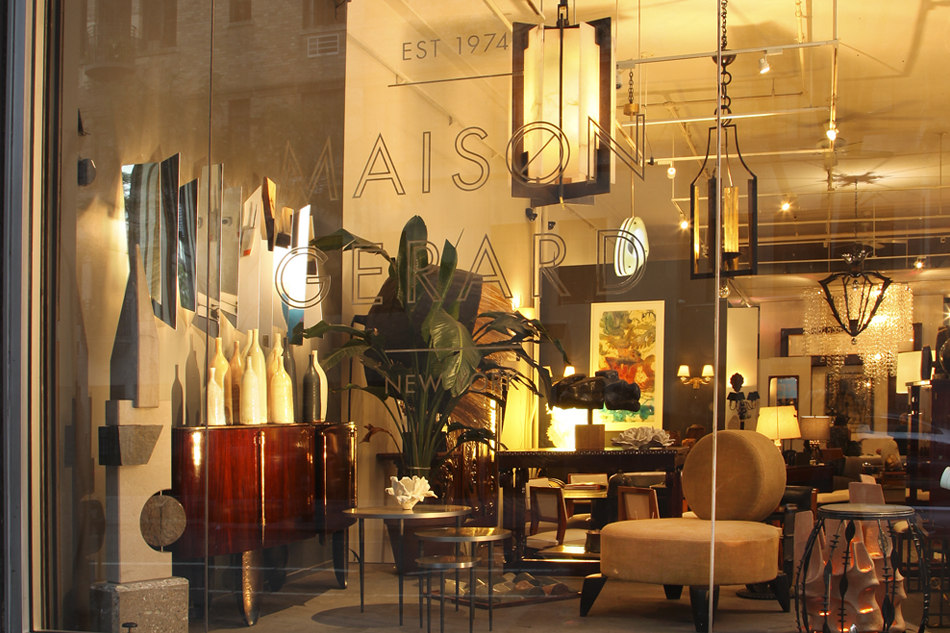 In the window display Maison Gerard prepared for On 10, the featured item — a bronze-and-slate side table by Franck Evennou — sits at right beside a Bluc chair, also by Evennou, and a set of three nesting tables by Franck Chartrain. Hanging above is a Lustre Aurore lantern by Hervé van der Straeten. 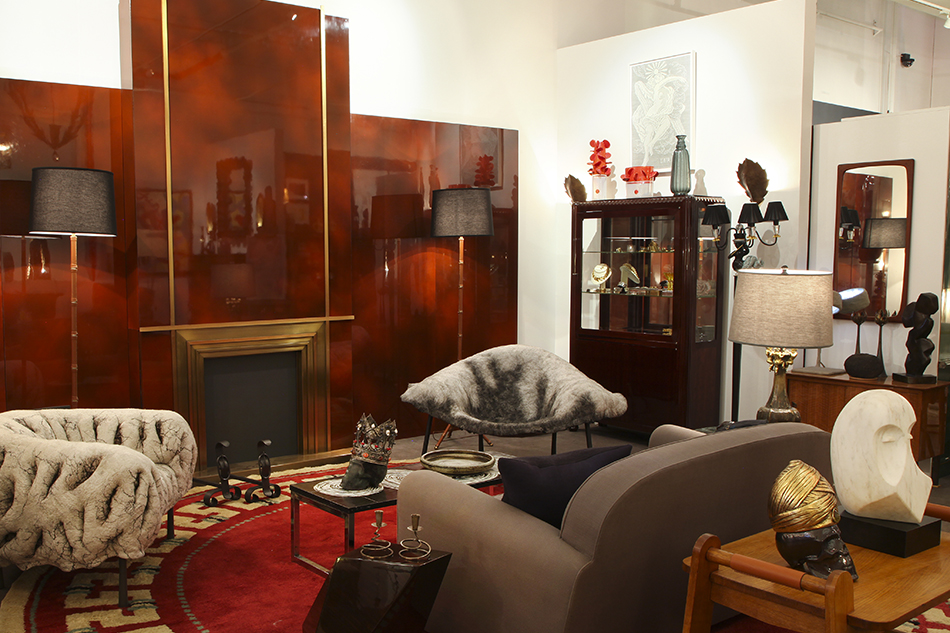 Standout pieces in this area of Maison Gerard’s showroom are chairs by Ayala Serfaty, behind which sit a pair of faux-bamboo floor lamps by Jacques Adnet. 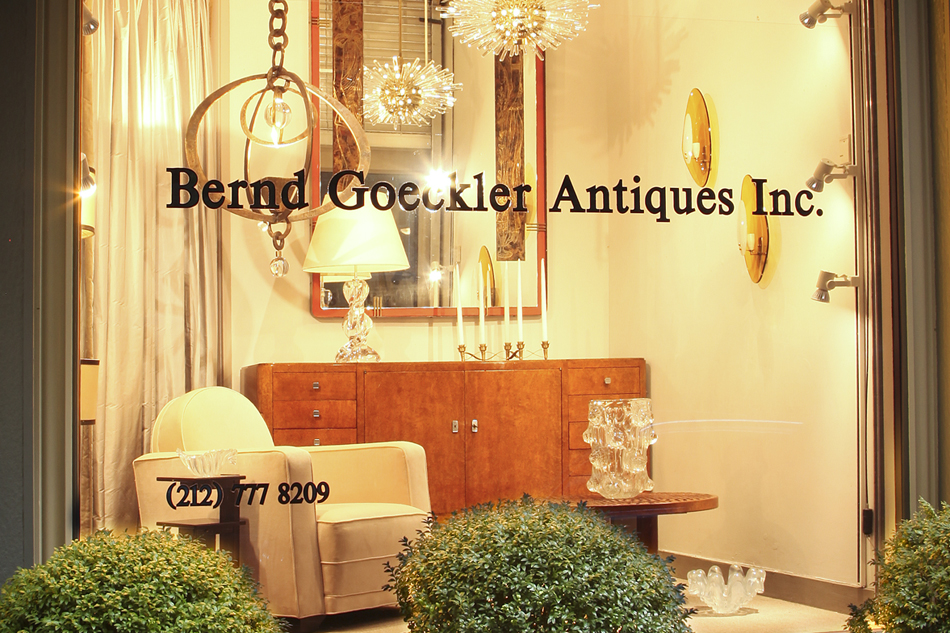 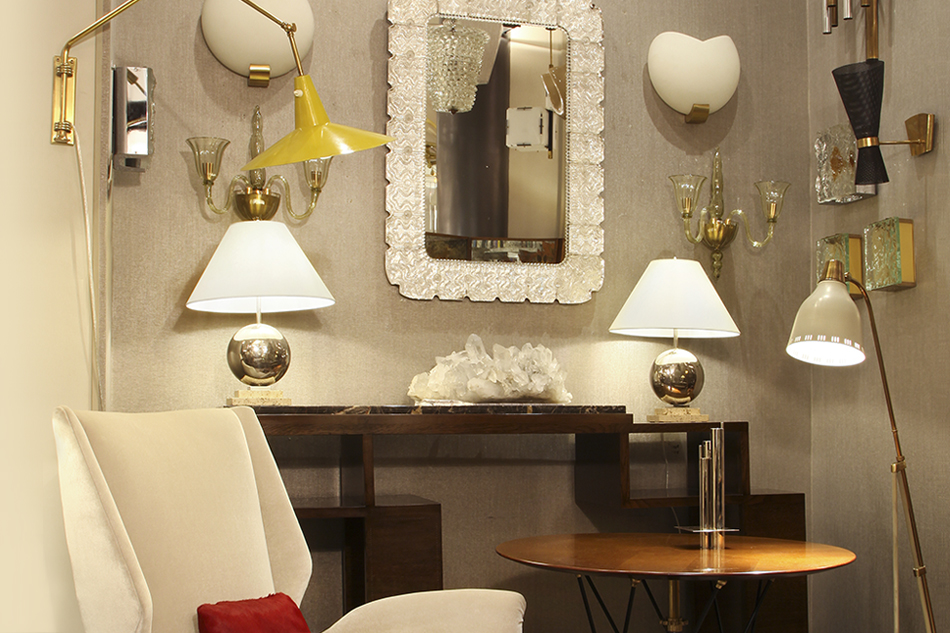 At Bernd Goeckler, a mirror by Carl Fagerlung and Atelier Jean Perzel sconces hang over an open-frame mahogany console. On its marble top are a pair of 1960s French table lamps and a quartz specimen. 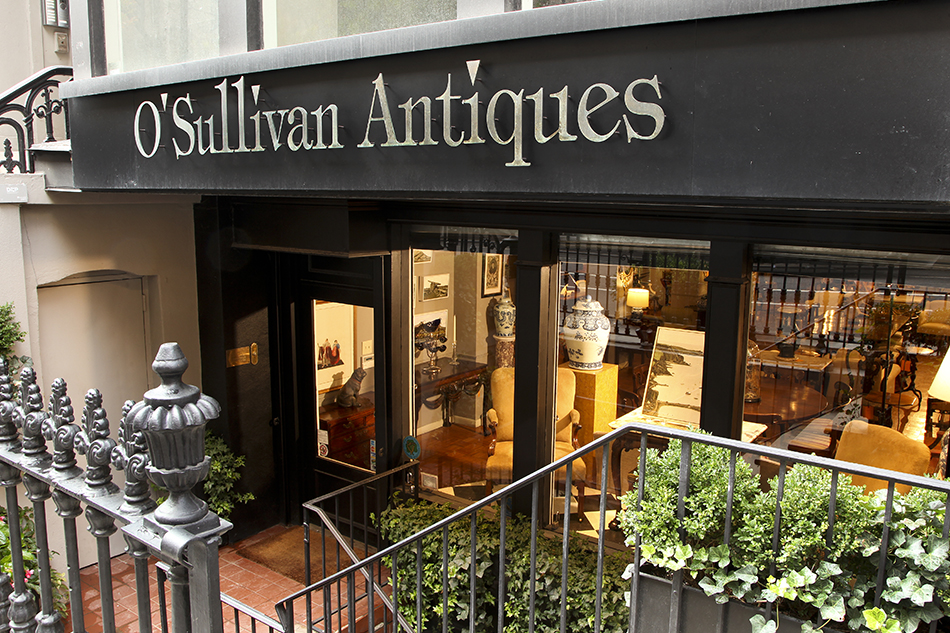 O’Sullivan Antiques, a gallery specializing in English and Irish Georgian furniture that has been on 1stdibs since 2004, has participated in both previous years of On 10. 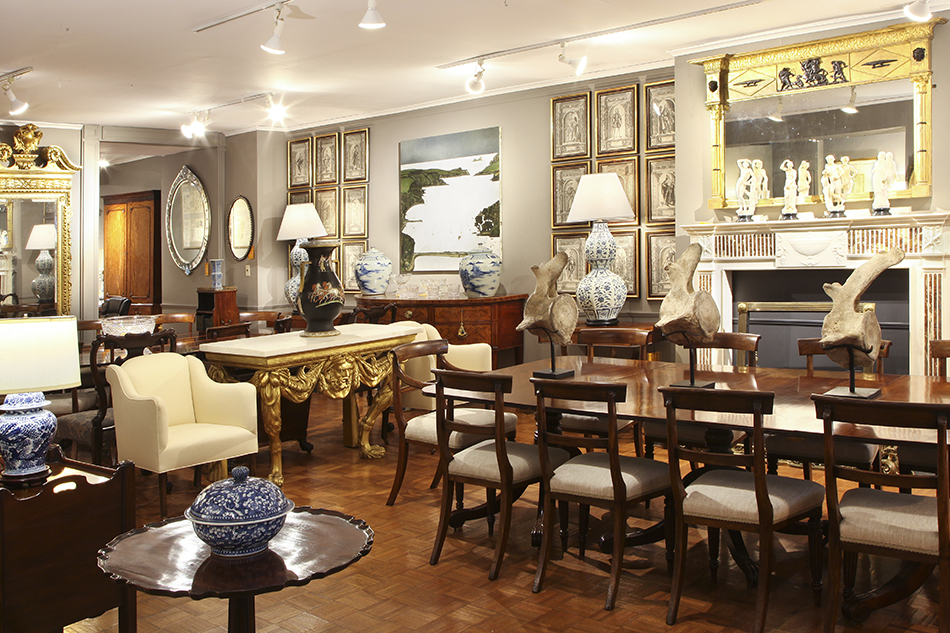 In O’Sullivan’s showroom, a 19th-century Regency gilt overmantel mirror (the gallery’s featured item for the event, at right) hangs above an 18th-century marble fireplace. Another highlight in the showroom is a 19th-century giltwood table with marble top, seen at left, atop which sits a 19th-century amphora urn.