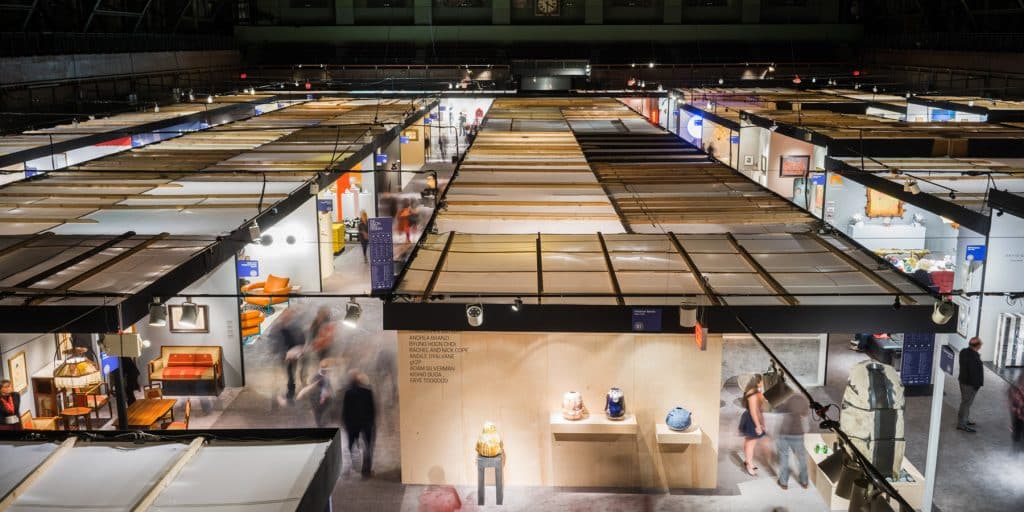 An impressive global roster of galleries will display their best offerings — ranging from antiquities to contemporary pieces — at the annual New York fair.

November 6, 2017In its sixth edition, running from November 9 through 13 at New York’s Park Avenue Armory, the Salon Art + Design is more international, more luxurious and more contemporary than ever. Look for first-time exhibitors from Paris, Copenhagen and Madrid to bring specially commissioned new works of art and design. They’ll join some 50 other top-drawer galleries from 11 countries offering decorative and fine arts dating from antiquity to just this minute.

This year, 1stdibs is pleased to be the official online partner of the salon. As such, we’re hosting a shopping portal so that those who visited the fair (or wish they could have) can find and purchase the incredible items on display.

“What we like best about the fair is its astonishing variety,” says Jill Bokor, the salon’s executive director. “You could start with a twenty-four-thousand-year-old polychrome head from Egypt and set it on a concrete table from the 1980s lit by a contemporary Gino Sarfatti chandelier. That’s the reason so many collectors and designers populate the salon: its unparalleled depth, breadth and geographic reach.”

Here, we’ve zeroed in on 17 of the dizzyingly diverse offerings to whet your appetite for a fuller, in-person viewing. 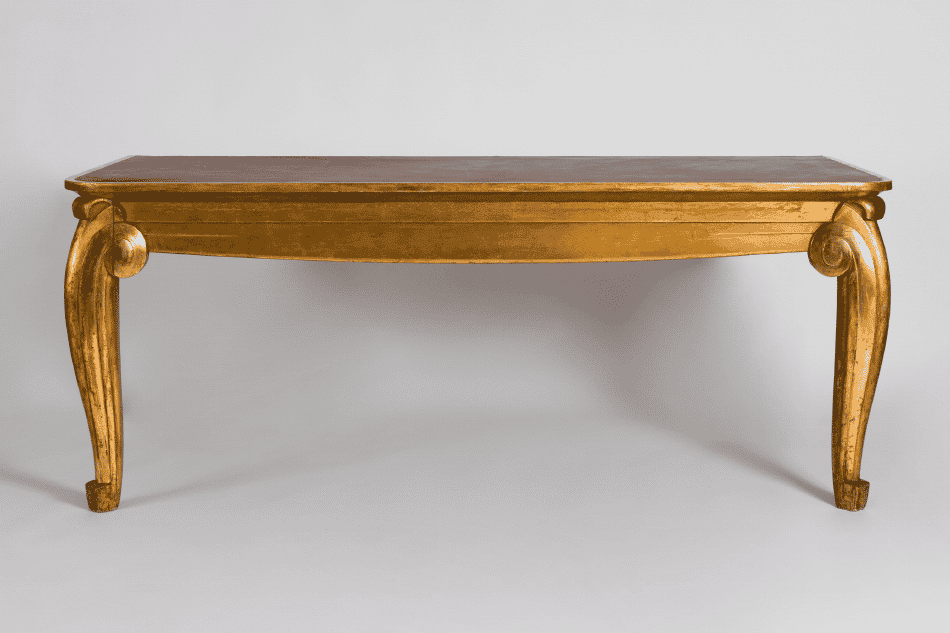 There can be no finer Art Deco provenance than that of this presentation console, made in the 1920s by legendary Parisian designers Süe et Mare for the equally legendary fashion designer Jean Patou. “It is one of two created for Patou’s maison de couture, with gorgeous original gilding,” says Benoist Drut, of Manhattan’s Maison Gerard, who coveted the piece for years before acquiring it recently. The gallery will make the curvaceous console a focal point of its lavish booth at the Salon. Photo courtesy of Maison Gerard 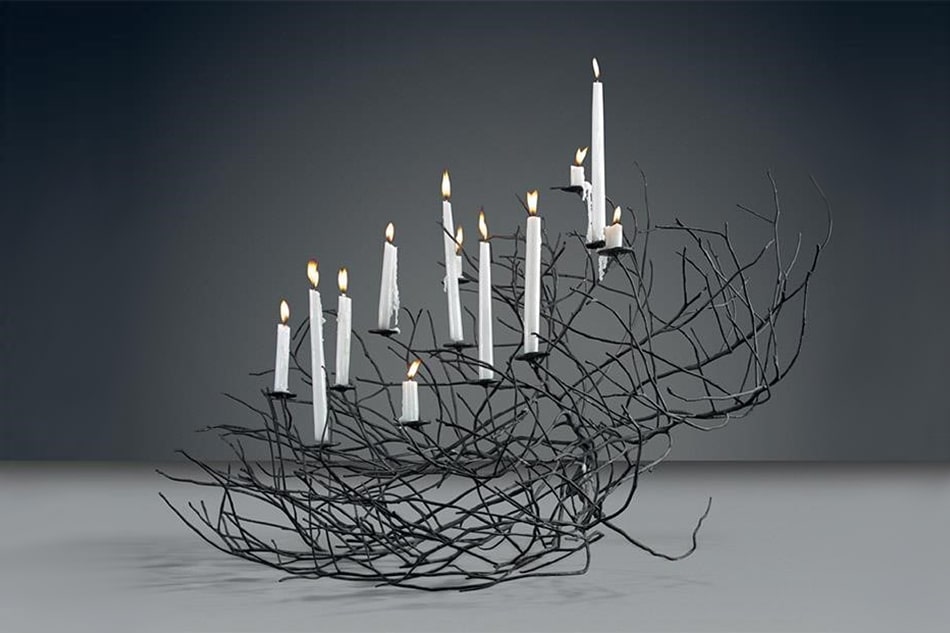 Multidisciplinary artist Michele Oka Doner, whose oeuvre ranges from jewelry and video to one of the world’s largest pieces of public art (a mile-and-a-half-long stretch of terrazzo flooring at Miami International Airport embedded with bronze sea-creature designs and mother-of-pearl), created this one-of-a-kind cast-bronze candelabra in 2007 to celebrate the importance of fire in human culture. Look for Burning Bush at the booth of London’s David Gill Gallery, among other works of international contemporary design. Photo courtesy of David Gill Gallery 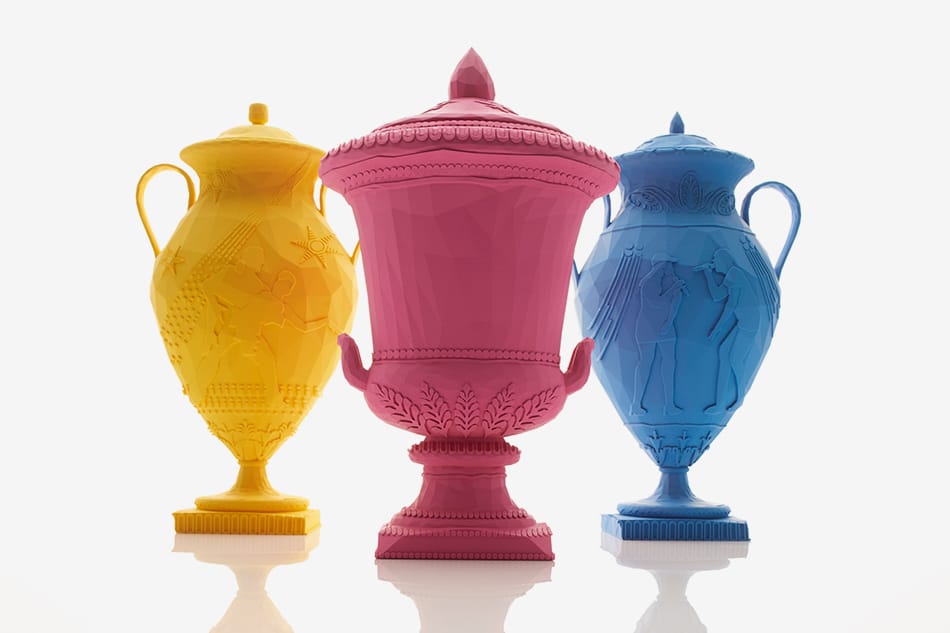 Josiah Wedgwood was at the forefront of the Industrial Revolution. British artist Michael Eden is at the forefront of today’s 3D-printing revolution. Eden’s witty high-tech takes on classic Wedgwood vases, featuring images from TV and movies, are fabricated from a fine-quality nylon material using a computerized process called additive layer manufacturing. The works inhabit “an exciting gray area between craft, design, art and technology,” the artist has said. London’s Adrian Sassoon Gallery is bringing them to the Salon. Photo courtesy of Adrian Sassoon Gallery 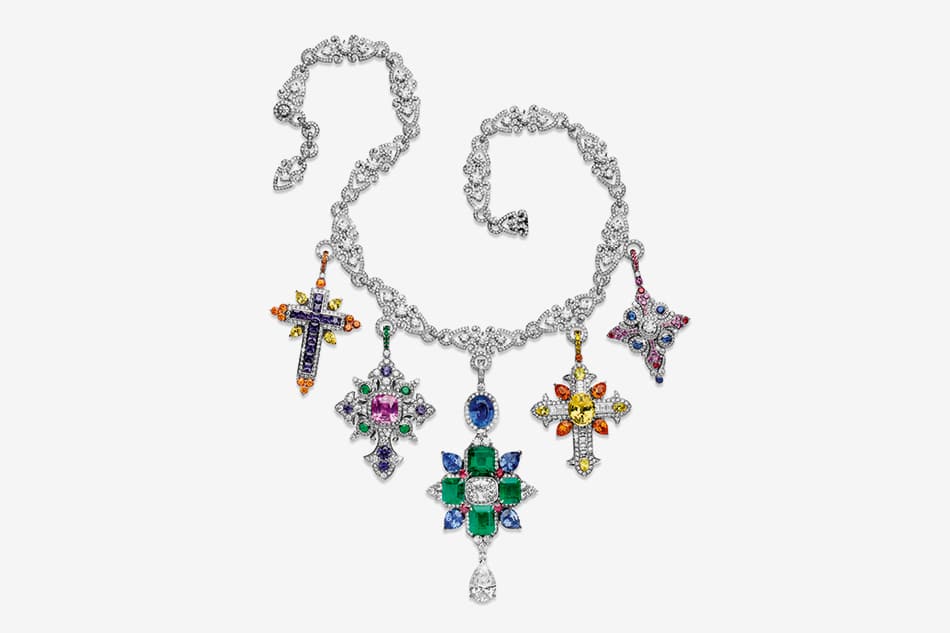 Resplendent with diamonds, emeralds and sapphires and rich in historical resonance, the Rosa dei Venti from Maison Giampiero Bodino can be worn as a necklace — composed of all five crosses or fewer, on a short or long chain — or as a group of brooches. Bodino, a master Milanese craftsman, created this dazzling piece in memory of an icon he saw as a child in the San Gennaro cathedral in Naples. Bodino’s pieces will have their own spectacular setting in the armory’s library, a rare example of a fully extant Louis Comfort Tiffany–designed interior. Photo courtesy of Maison Giampiero Bodino 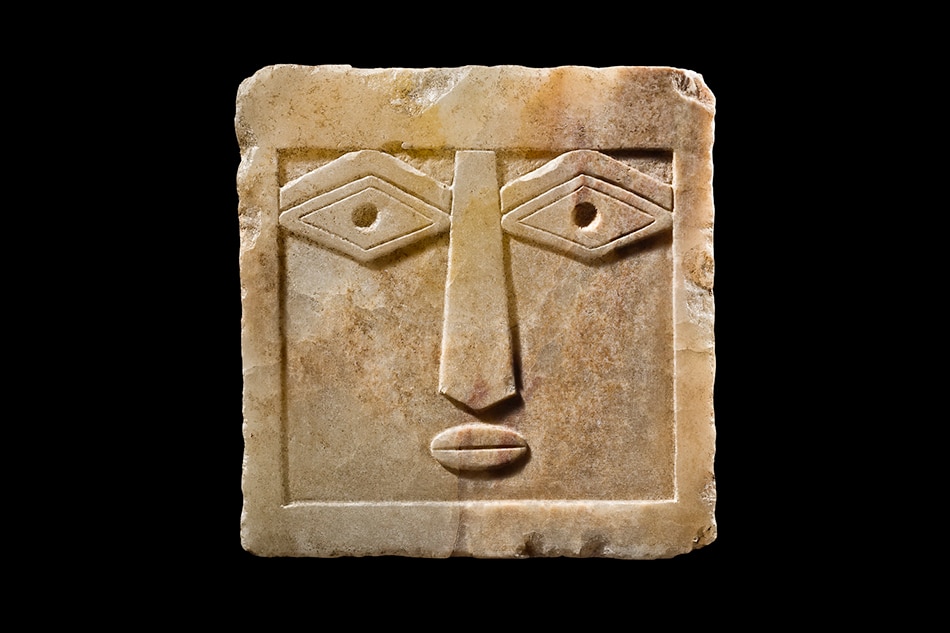 You’ll find this carved alabaster face, part of a two-millennium-old stela made on the Arabian peninsula, at the booth of Ariadne Galleries, New York- and London-based dealers in antiquities. It’s the product of “a thriving kingdom that had contact with Greek, Roman and Persian art,” says Greg Demirjian, a gallery owner. “Collectors of modern and contemporary art connect with its stylized aesthetic.” Photo courtesy of Ariadne Galleries

This sleek tower of charred wood and polished brass leaf, created in 2014 by French architect Hervé Langlais, exemplifies the precision and purity of line for which he is known. The seven-foot-tall Heaven and Earth mirror is “a tribute to Brancusi,” says Sophie Negropontes, owner of Paris’s Galerie Negropontes, which will be unveiling pieces from its latest limited-edition collection, Synthesis, at the Salon. “It is like a tree trunk with bright leaves looking up into the sky.” Photo courtesy of Galerie Negropontes 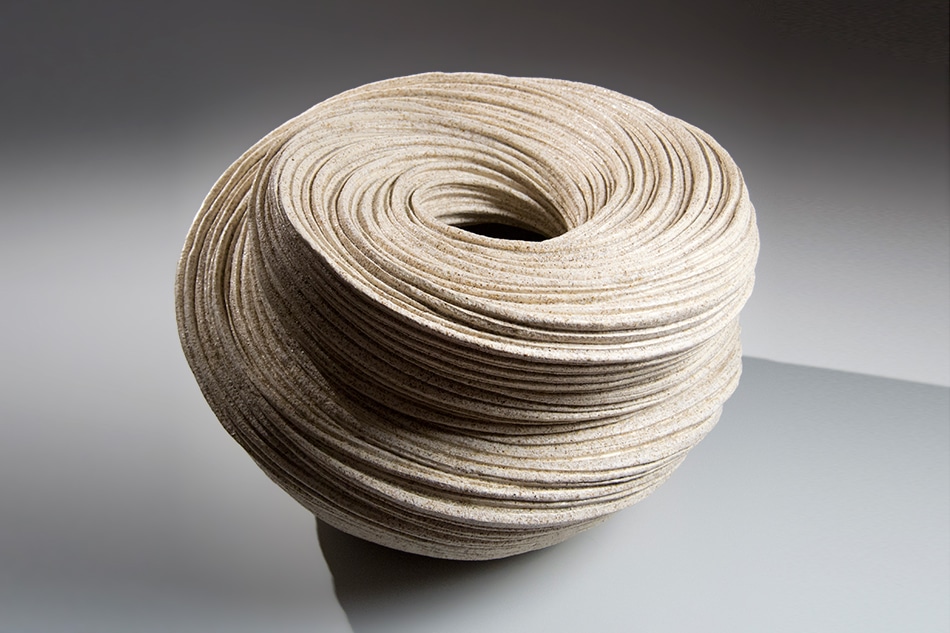 Join major museums in collecting Sakiyama Takayuki’s hand-carved ceramic vessels, their swirly forms and sparkling glazes inspired by the movement of waves and the patterns on the sand beaches beneath the artist’s coastal residence on Japan’s Izu Peninsula. “Their simple beauty has been captivating collectors and curators for two decades,” says Manhattan-based Joan Mirviss, a longtime dealer in contemporary Japanese ceramics. Photo courtesy of Joan Mirviss 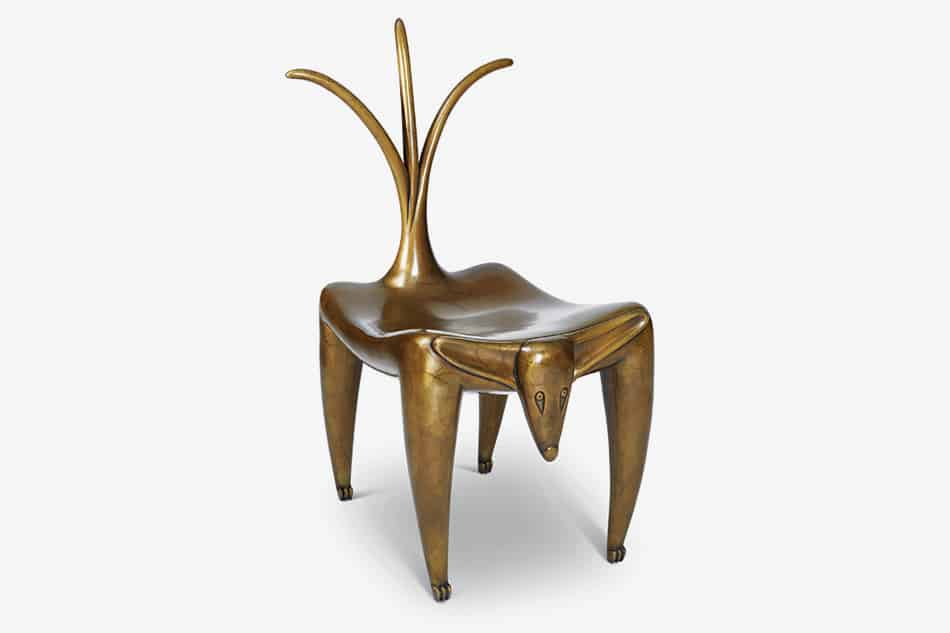 Judy Kensley McKie’s 2006 bronze chair in the form of a dog with a raised, wagging tail — number 10 in an edition of 12 — is sure to be a draw in the booth of New York’s DeLorenzo Gallery. “For me, McKie is the American Giacometti,” says gallery director Adriana Friedman. “I’ve seen her whimsical animal figures in the homes of major art collectors.” Photo courtesy of DeLorenzo Gallery 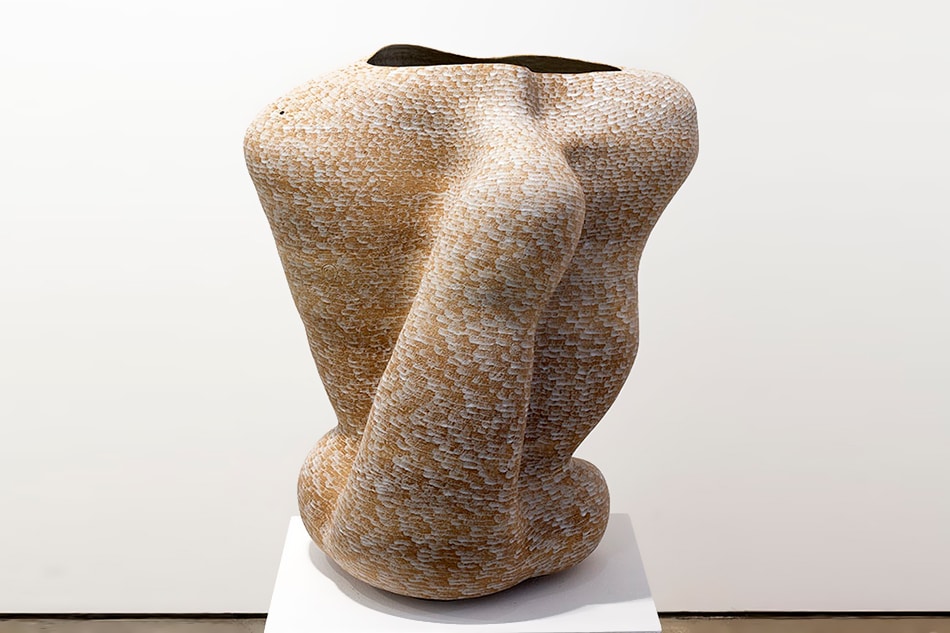 Kristina Riska is among Finland’s most-lauded contemporary ceramists. “She has been defying and redefining the traditional tenets of ceramic sculpture since the 1980s,” says Juliet Burrows, co-owner of Manhattan’s Hostler Burrows gallery. The voluptuous Volta II, created in 2017 at Finland’s iconic Arabia ceramics atelier, is Riska’s latest experiment in clay. Photo courtesy of Hostler Burrows 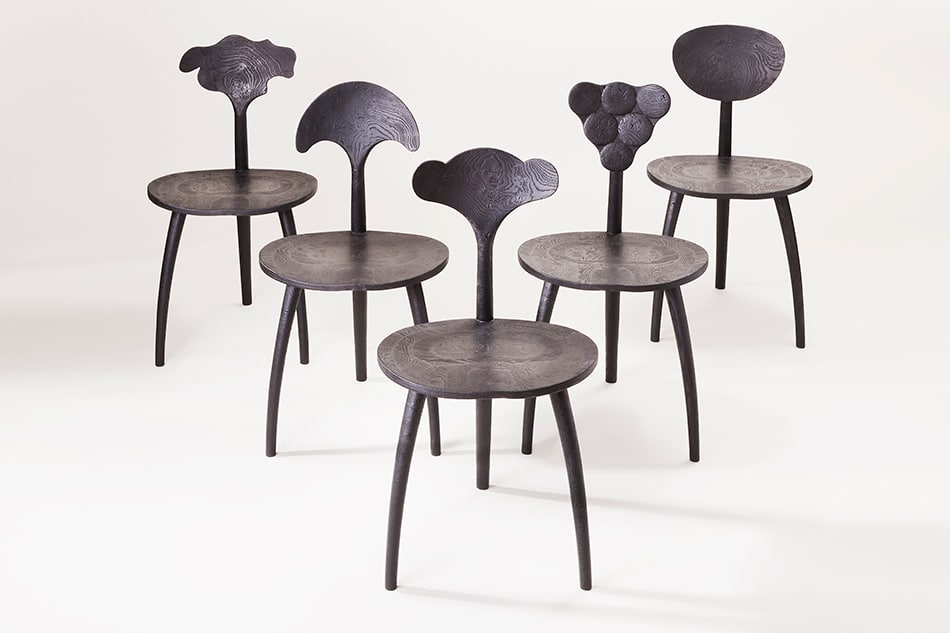 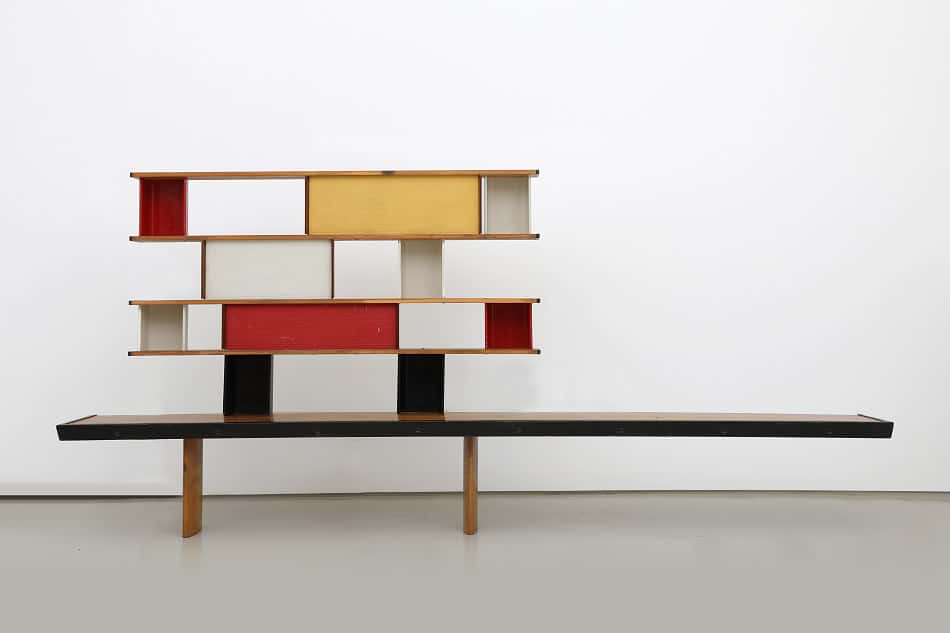 This commanding modular bookcase with Mondrian-like colors, conceived by visionary architect Charlotte Perriand for the Maison de Tunisie, a university dorm in Paris distinguished for the quality of its interior furnishings, “was very avant-garde when Perriand designed it in the early nineteen-fifties,” says Hugues Magen, of New York’s Magen H Gallery, which will display the rare pine, aluminum and lacquer piece at its booth. “She played with form, geometry and color like a construction game.” Photo courtesy of Magen H Gallery

In its first outing at the Salon, Chelsea’s Twenty First Gallery is bound to cause a stir with Erwan Boulloud’s seven-foot-long Enfilade credenza, constructed of polished and patinated steel in the young designer’s atelier near Paris. “Even the hinges are handmade,” gallery owner Renaud Vuaillat says of the limited-edition piece, whose pattern is derived from cellular structures and whose base is a continuation of the surface design. Photo courtesy of Twenty First Gallery 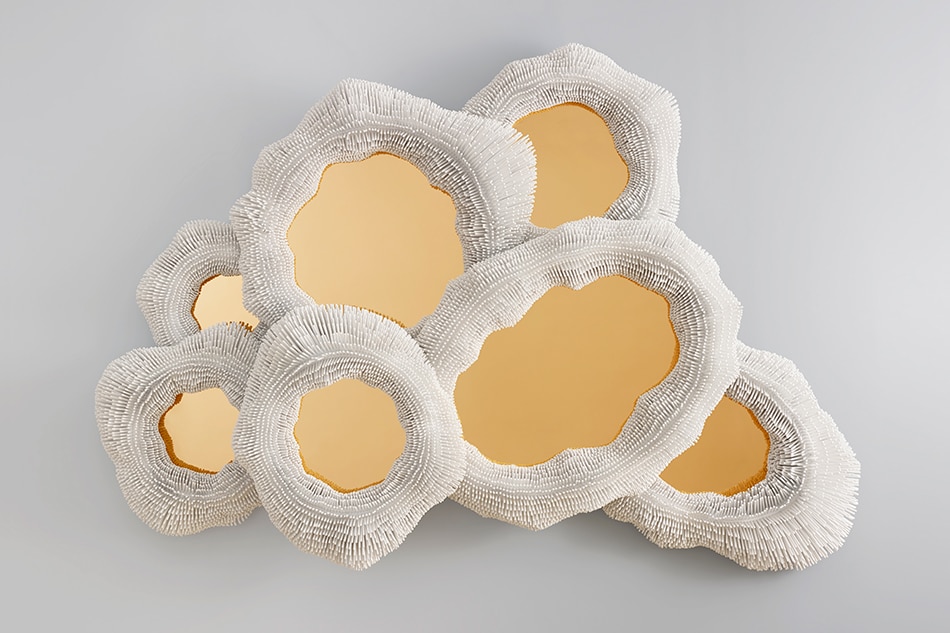 Pia-Maria Raeder’s Sea Anemone wall mirror is made of some 27,000 tiny sticks of beech wood, each painstakingly cut, arranged around seven bronze-colored reflective surfaces and then varnished. Paris-based Galerie BSL, making its first appearance at the Salon, will present Raeder’s unique work to American audiences alongside pieces by other contemporary European designers. Photo courtesy of Galerie BSL 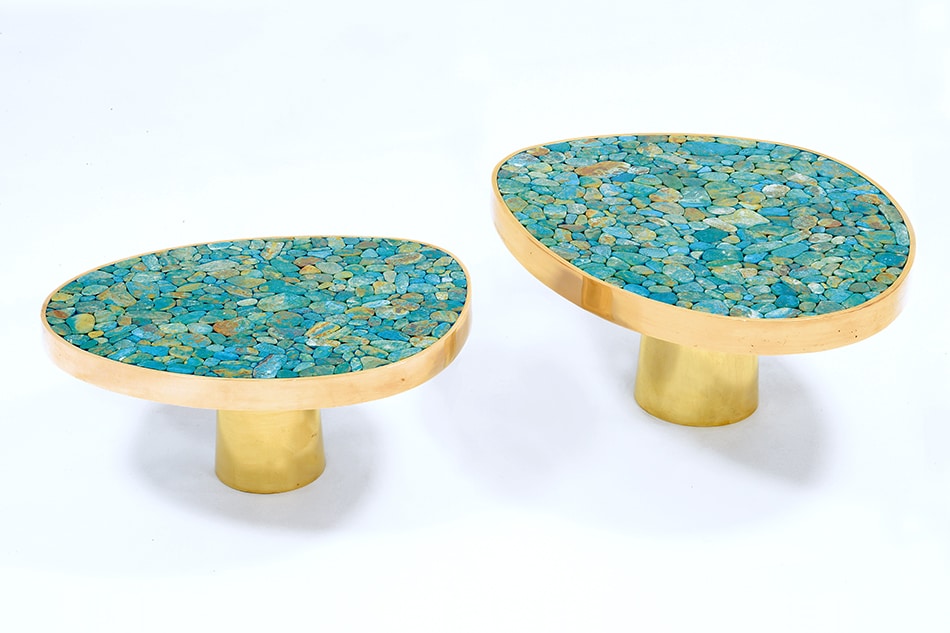 While visiting Hong Kong, Paris art dealer Philippe Rapin was so smitten by the meubles bijoux — furnishings and objects adorned with turquoise, pyrite, amber, agate and other gemstones — made there in the 1970s under the name Kam Tin that he bought the brand. This turquoise and brass coffee table is part of a new limited edition produced for Maison Rapin, which is coming to the Salon for the first time. Photo courtesy of Maison Rapin 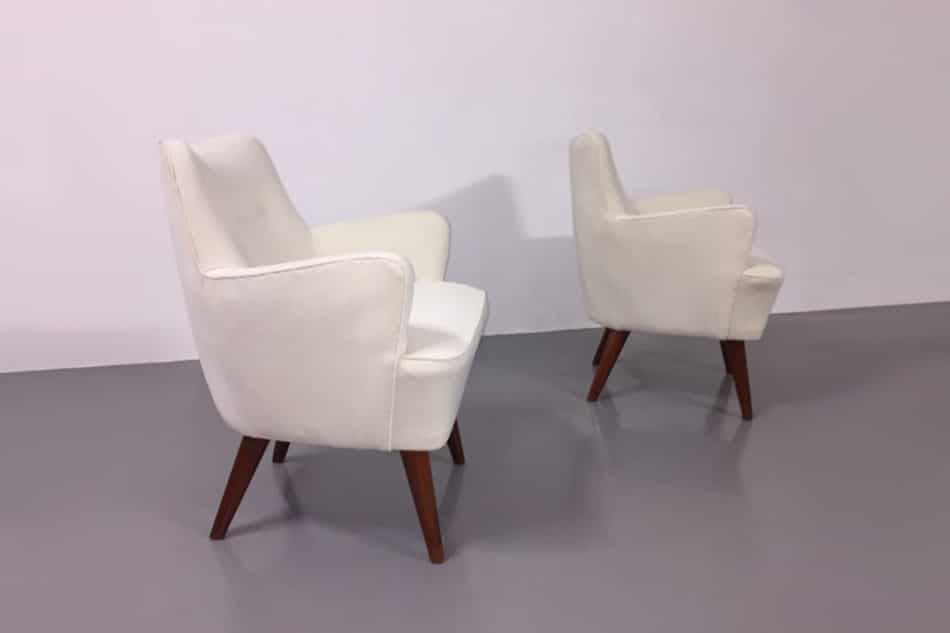 In the 1950s, architect Giò Ponti, leading light of Italian modernism, was hired to design ocean-liner interiors as part of an effort to promote high-style Italian design throughout the world. These fabric-covered armchairs with walnut legs came from a restaurant aboard the luxury ship Augustus. Milan’s Galleria Rossella Colombari is bringing them to the Salon, along with pieces by other influential figures in postwar Italian design. Photo courtesy of Galleria Rossella Colombari 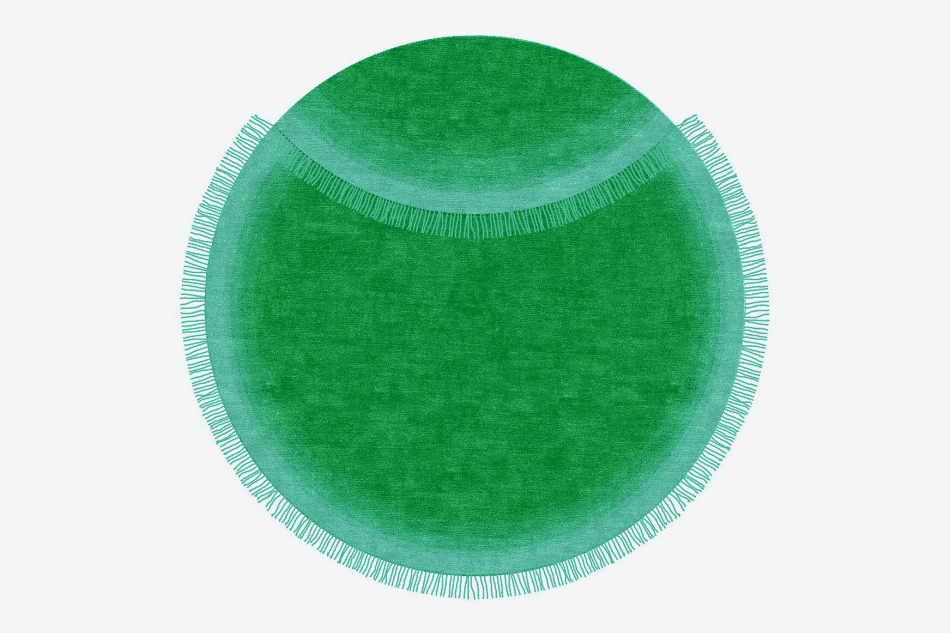 Hand-dyed and -knotted by Nepalese craftsman, the luminous wool rugs in Studio HVN’s Eclipse series — each seemingly composed of two overlapping rugs, 10 feet in diameter and in vivid ombré colors — take four months to make. Henny van Nistelrooy, the gallery’s Dutch owner, who is based in China and teaches at the Central Academy of Fine Arts in Beijing, is making his debut at the Salon. Photo courtesy of Studio HVN 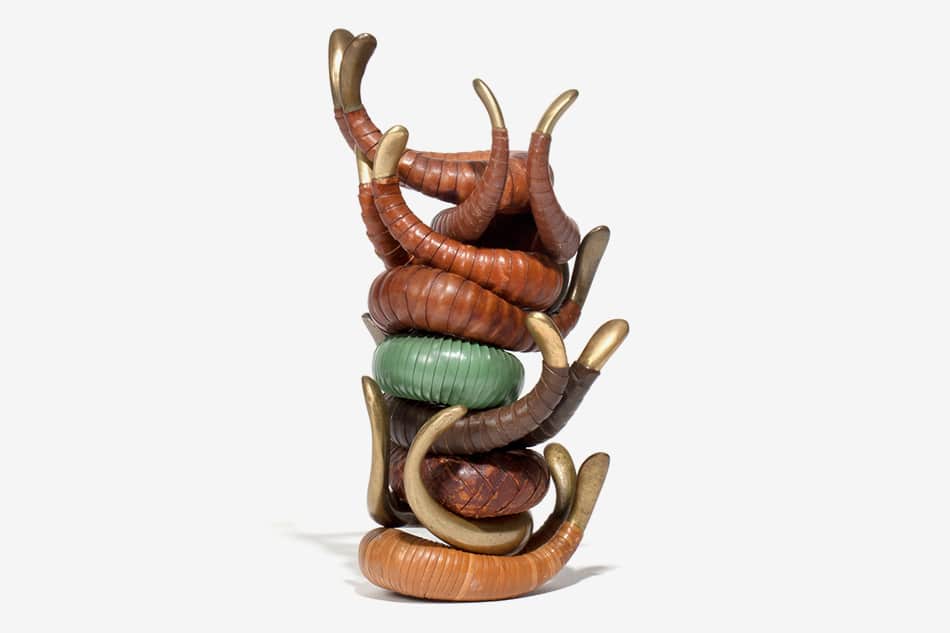 One could be forgiven for not being able to identify this curious sculptural object. It is, in fact, a stack of brass and leather pipe rests made in the 1950s by Vienna’s Bauhaus-inspired Carl Auböck Workshop, whose expertly crafted everyday objects stand out for whimsical modernist design and quality materials. “Auböck has somehow eluded the spotlight,” says Zoe Fisher, director of the Patrick Parrish Gallery, whose booth at the Salon will be dedicated to its products. “They have become cult objects of desire, quietly cherished by savvy collectors.” Photo by Clemens Kois for Patrick Parrish Gallery