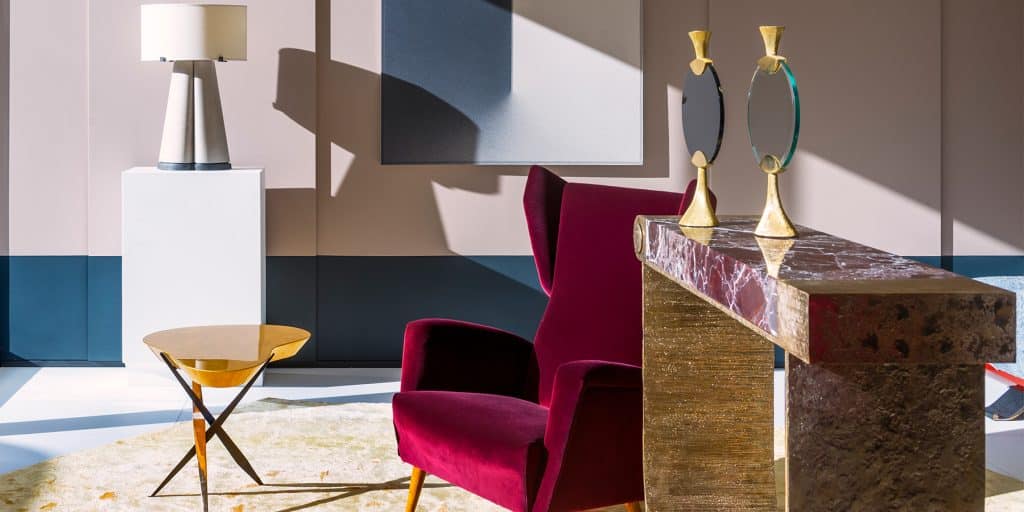 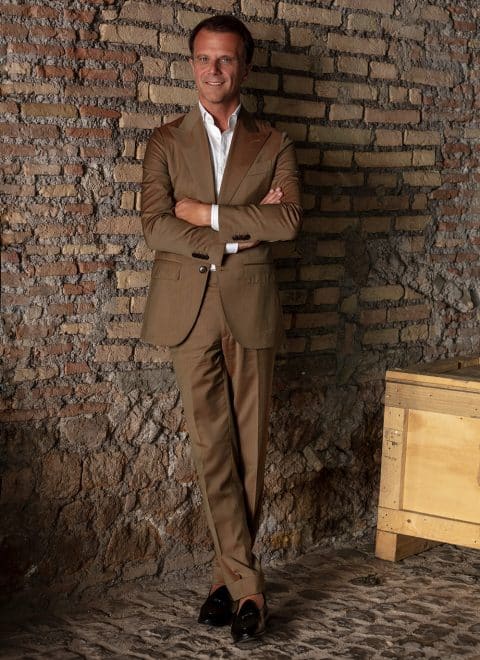 January 5, 2020Architect Achille Salvagni‘s eponymous first monograph, from Rizzoli, delves into the influences behind his interior and furniture designs. Top: Achille Salvagni Atelier‘s 2017 furniture exhibition “Pompeii” displayed both new pieces and ones from his existing collection. All photos by Paolo Petrignani unless otherwise noted

When I was asked to write the text for the book Achille Salvagni (Rizzoli), I knew it would be my job to interpret the Italian architect and designer’s work for the reader. What I didn’t realize was how much I would learn in the process. Salvagni, who founded his design studio in Rome in 2002, is clearly a modernist. His sleek spaces — apartments and townhouses in New York, Rome, London and Paris, for example — make few overt references to history. Yet the material richness of these interiors, and the custom and limited-edition furnishings that Salvagni designs for them, reflect his passion for the fine materials and craftsmanship that historically characterize Italian architecture and design. It is a tradition embodied in masterworks ranging from the Baroque buildings of Francesco Borromini to the elegant 20th-century furniture designed by Giò Ponti, Tomaso Buzzi and Paolo Buffa, one that Salvagni absorbed from childhood. As he says in the book, “If you want to look at the future, you need to know the past.” 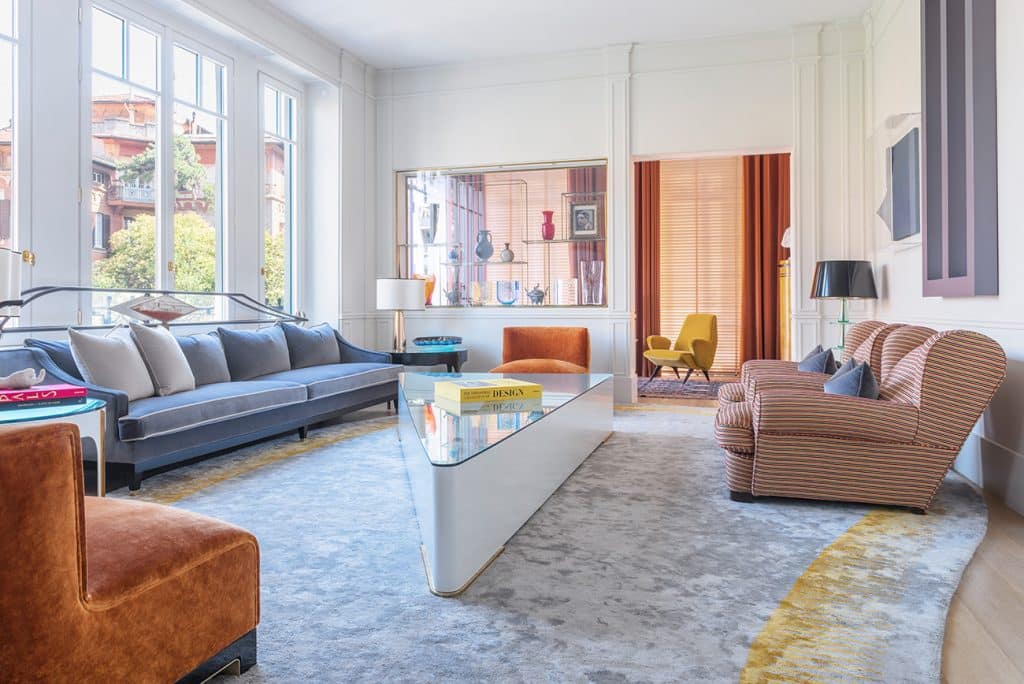 The living room of Salvagni’s Rome residence, which he shares with his wife and two children, features a triangular coffee table of his design.

Salvagni grew up outside Rome, in one of the “new towns” built in the 1930s under Mussolini. His father, a builder, was a key influence, taking his son to construction sites. Salvagni himself began drawing furniture when he was 10. After attending university in Rome, where he was surrounded by the city’s historic architecture, Salvagni won a grant to study in Stockholm. There, he saw the work of modernist architects like Erik Gunnar Asplund and Sigurd Lewerentz. During this time, he traveled to Finland and visited every building designed by Alvar Aalto, whose work, he states in the book, he admires for its “rationalism with a human quality.” 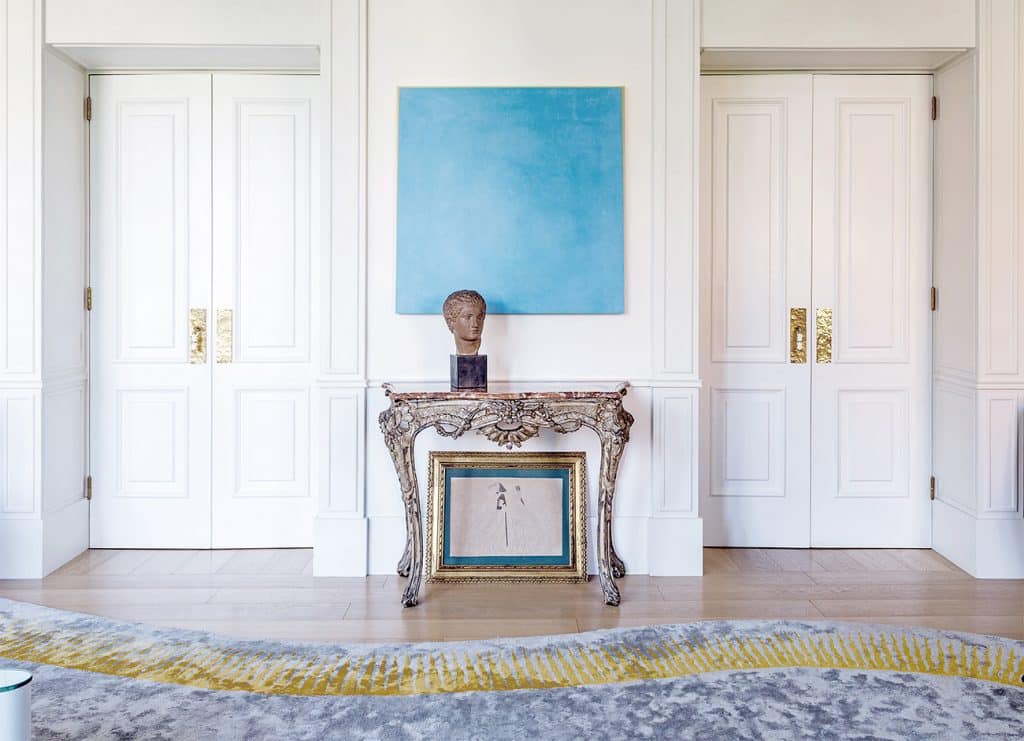 An Ettore Spalletti painting hangs over a Louis XV console in the home.

After opening his office in an abandoned warehouse on Rome’s Palatine Hill, Salvagni designed a series of supermarket interiors, as well as an apartment for one of the company’s owners. This client then asked him to design the interiors of a yacht — for free, arguing that the architect had never done one. Salvagni accepted the commission, betting that the experience would pay off. It did: He has since designed the interiors of more than 20 yachts, which have won numerous awards. 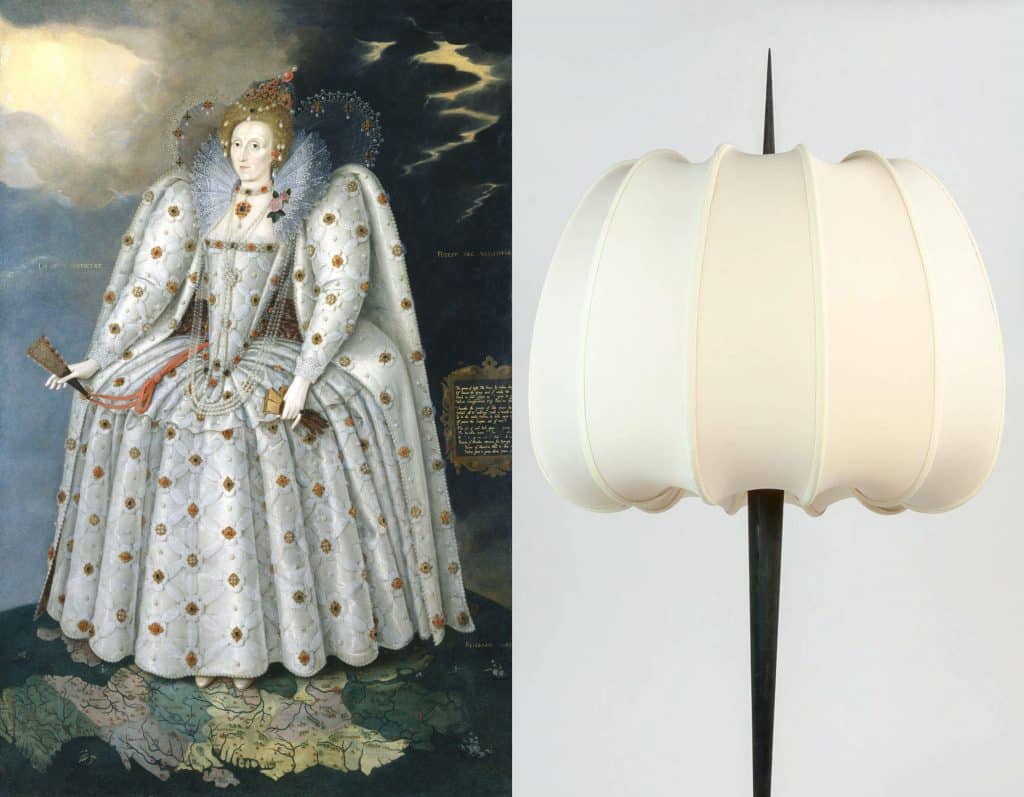 The Ditchley portrait of Queen Elizabeth I by Marcus Gheeraerts the Younger (left) inspired the shape of the Japanese silk shade on Salvagni’s Lancea lamp. The shade was hand-stitched by an 85-year-old woman who had been Renzo Mongiardino’s assistant. Portrait courtesy of the National Portait Gallery London

Although Salvagni’s work is predominantly in interiors, he recalls in the book that “I knew I’d be an architect. I never considered anything else.” Indeed, he considers the architecture of a space to be paramount, stating that it “needs to be a piece of art.” For the living room of a New York apartment, for example, Salvagni created a marble fireplace with a curvaceous profile that echoes that of the base of the apartment building, which was designed by legendary architect Rosario Candela. In the master bedroom of an apartment in a historic Roman palazzo, he created arched openings that refer to 16th-century interiors and to the abstracted neoclassical architecture in Giorgio de Chirico’s paintings. Salvagni enlarged the living room of the spacious Rome apartment he shares with his wife and two children to accommodate furniture he designed, along with 20th-century pieces by Buzzi and Buffa and modern and contemporary art.

Salvagni’s design for the dressing room of a Palm Beach home, at left, was influenced by Gian Lorenzo Bernini’s colonnades in St. Peter’s Square in Rome.

In 2013, the New York gallery Maison Gerard began to show Salvagni’s furniture and object designs. As Benoist F. Drut, the gallery’s owner, says in his foreword to the book, Salvagni is “truly a design couturier.” Two years later, Salvagni opened a gallery dedicated to these pieces, Achille Salvagni Atelier, in the Mayfair district of London (where the Salvagni family has recently relocated). His designs, which are made of luxurious materials like walnut, bronze, marble and lacquer, often incorporate abstracted historical narratives. The hand-stitched silk shade of his Lancea lamp, for example, was inspired by the voluminous skirt worn by Queen Elizabeth I in a late-16th-century portrait. For Salvagni, the ultimate compliment is when someone looks at one of his designs and asks whether it is contemporary or vintage.

The mosaics on the ambulatory vault of Rome’s Santa Costanza church, at left, inspired Salvagni’s design for this staircase, with its curved wooden panels and metallic-looking finish, in a Rossinavi superyacht.

Similar references occur in Salvagni’s interiors, like the curving staircase walls on the yacht Endeavour II, their glowing metallic finish inspired by the mosaics in a fourth-century Roman church. In a clean-lined apartment in a modern Palm Beach building, the dressing room’s closet doors allude to Gian Lorenzo Bernini’s colonnade in Saint Peter’s Square in Rome. “I like the tension between old and new, or past and present,” he has told me. 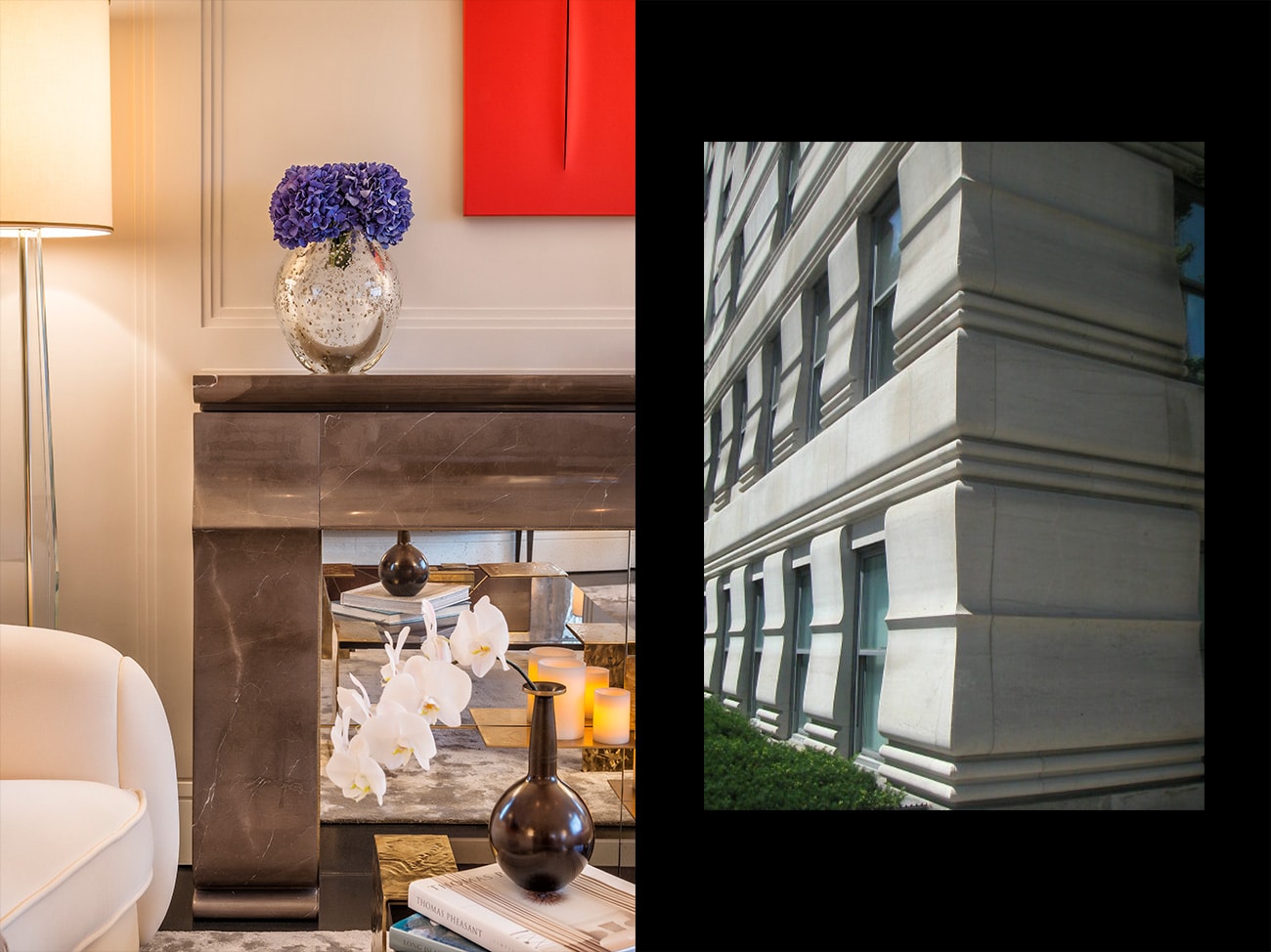 The profile of the fireplace in a Manhattan pied-à-terre, at left, echoes the architecture of the Rosario Candela–designed building where the apartment is located.

Salvagni’s current projects include an apartment in London, an expansion of a townhouse in New York and a 475-foot, state-of-the-art yacht. Shaped like a giant canoe, the vessel features a living room with a fireplace in the round, teak “stalactites” hanging from the ceiling and a silk carpet evocative of drifting desert sands that was, he says, “inspired by a primitive cave.” These could be the subject of another book. But for now, Achille Salvagni offers a far-ranging look at the architect’s design philosophy and working methods. As he says, “It explains my life and my vision.” 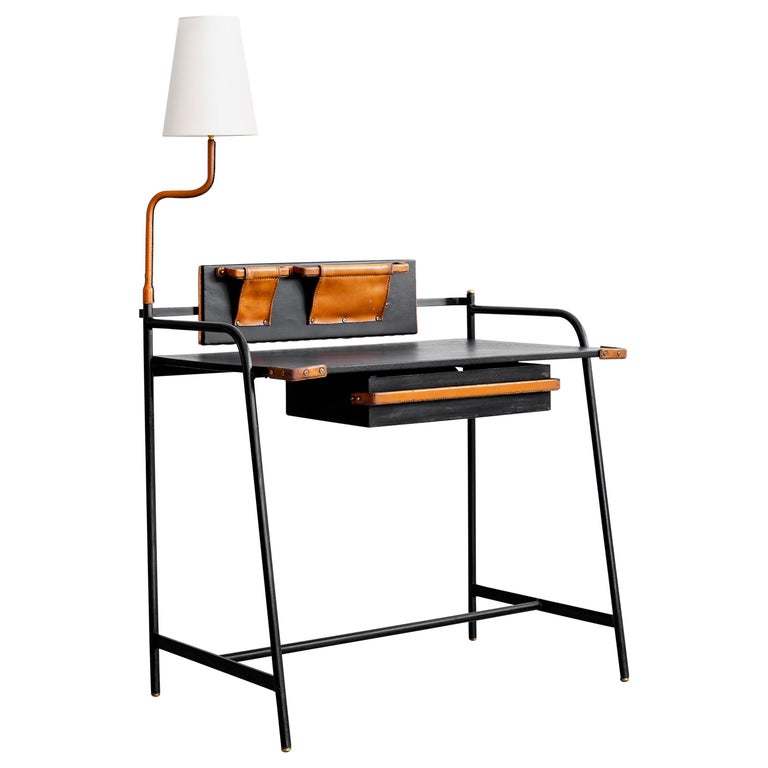 “The simple, utilitarian form of this desk, which incorporates wonderful leather pockets, merges campaign-style furniture with the French International Style movement of the nineteen forties.” 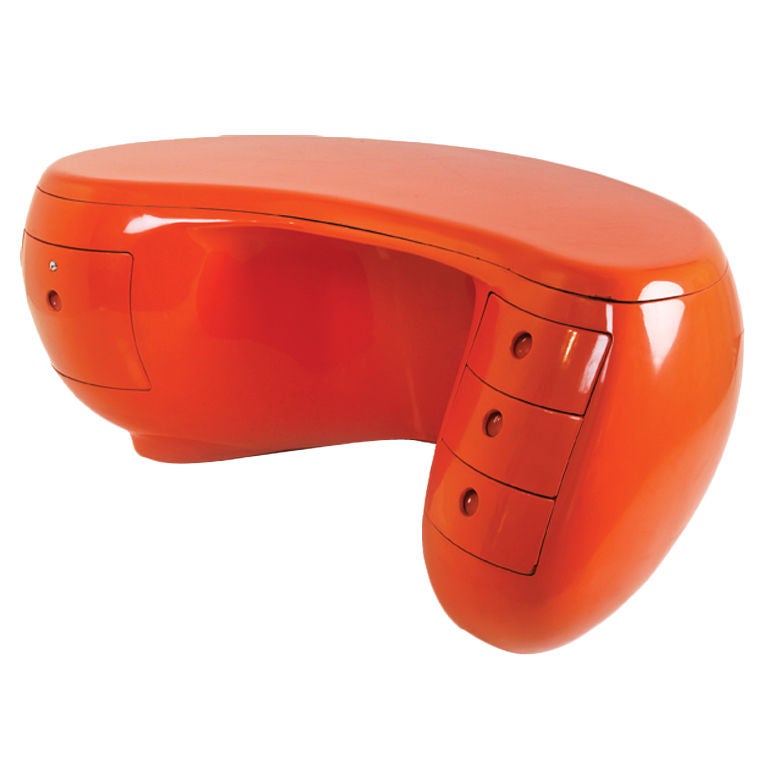 “I love this desk’s warm, happy pop of orange, and its nineteen seventies boomerang shape. This joyful statement piece can stand alone or be a counterpoint to more-subdued pieces.” 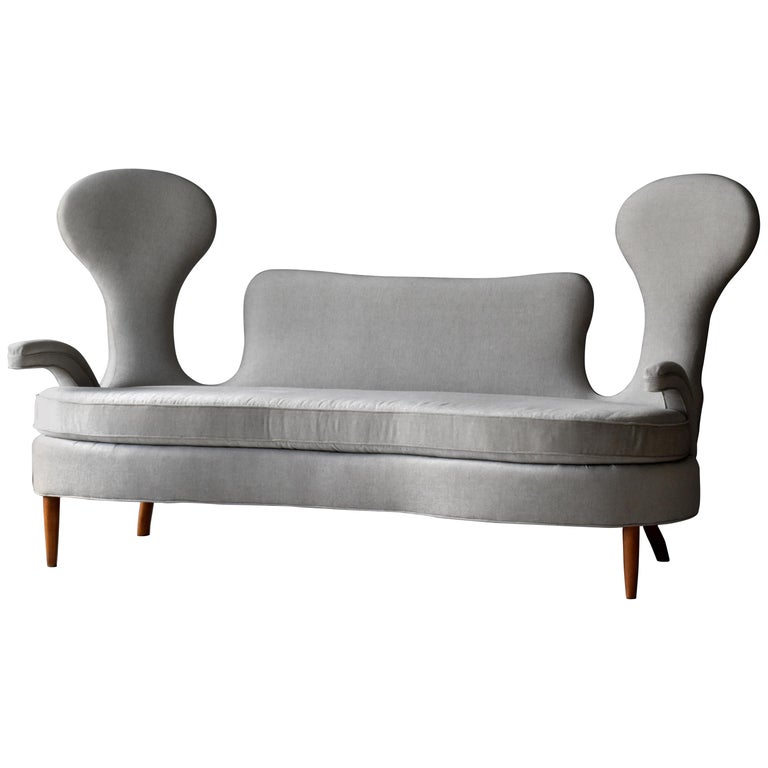 “I have always been attracted to ironic and crazy shapes, and this sofa offers a sense of whimsy and imagination. Its curvaceous edge is imbued with both a sense of tradition and newness, rooted in a modern Italian aesthetic but with the irreverence of an Elvis song.” 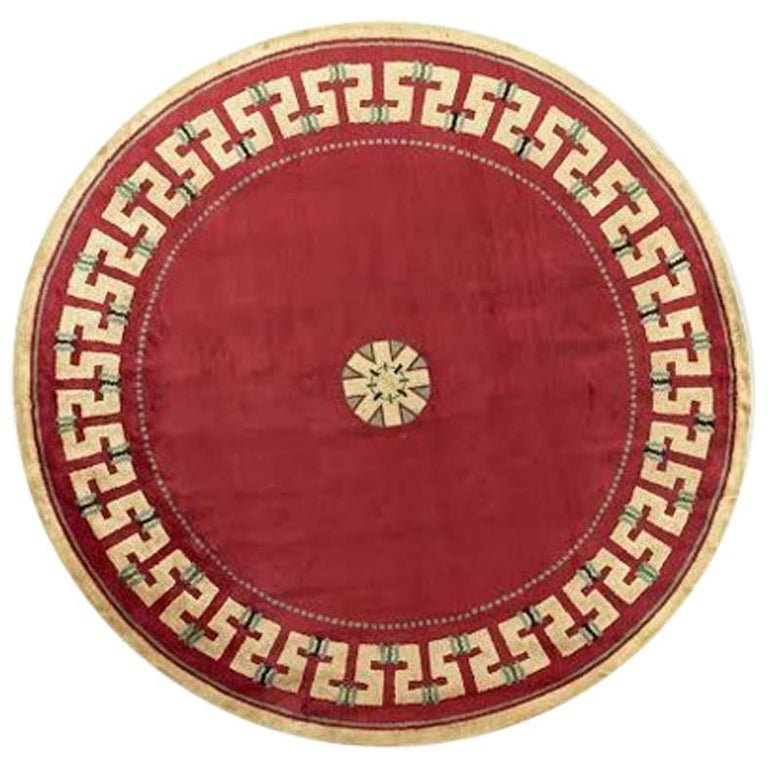 “Maison Leleu has always been an inspiration to me. They were dynamic and able to be traditional or of the moment. Masters of pattern, they were always daring with colors. The traditional Hellenic key pattern was reimagined for this carpet’s contemporary form — one that still holds up today. The round shape draws people in, making it perfect for a dining room or conversation area.” 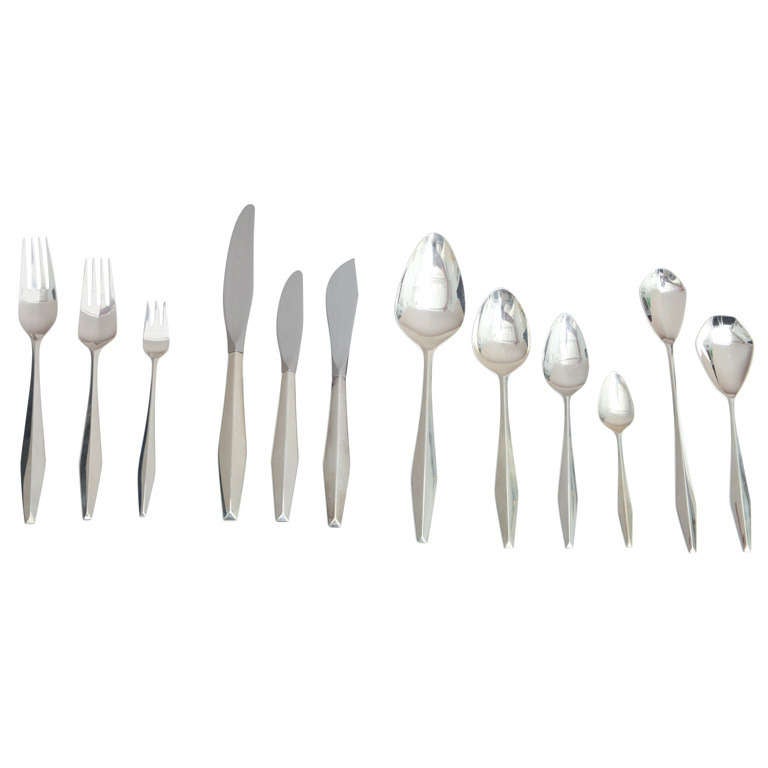 “I love this Ponti flatware for its simple elegance. It works equally well for everyday use and for special occasions. It reminds me of a work inspired by a cut fennel stem by Roberto Sambonet, whom I had the pleasure to meet in his Milan atelier when I was twenty-three.” 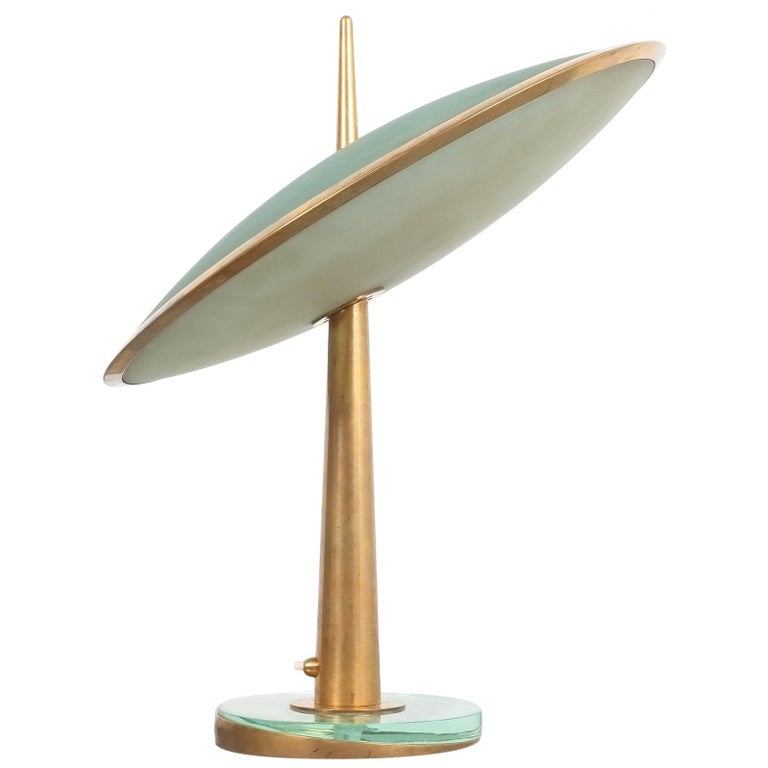 “I am completely intrigued by the retro-futuristic and space exploration. Pieces like this Max Ingrand lamp, with its purity of imagination, blends perfectly with antique, vintage or contemporary pieces.” 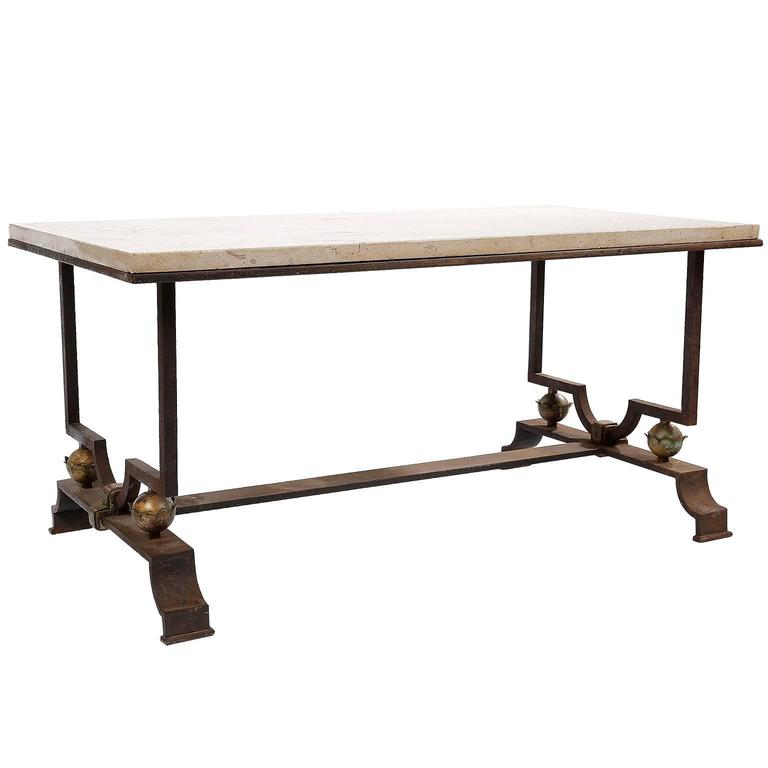 “A coffee table in the pure French tradition: a chic and timeless exercise in taste and vision” 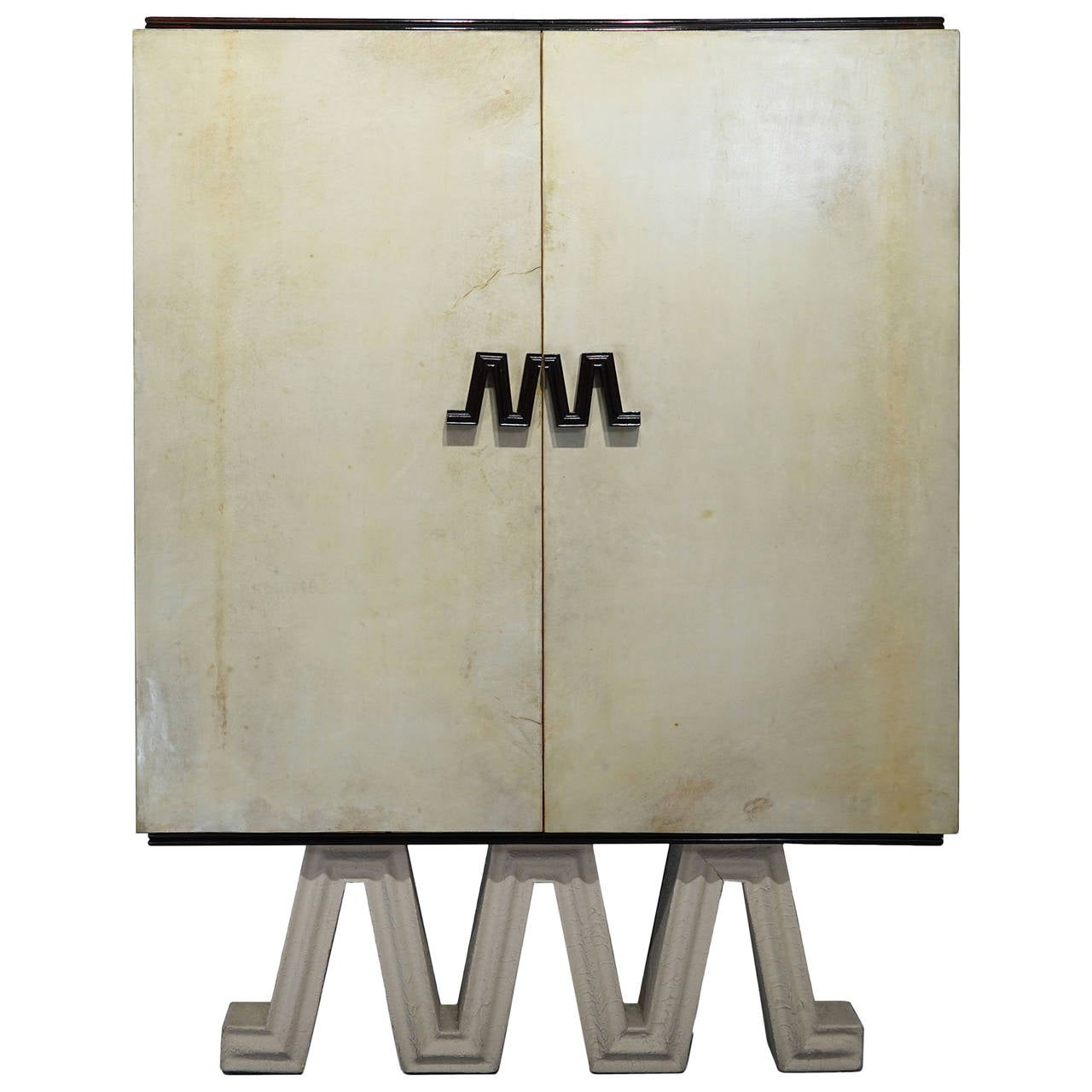 “Parchment, an ancient material, was elevated from the mundane to the artistic by forward-thinking Italian designers of the twentieth century like Borsani.” 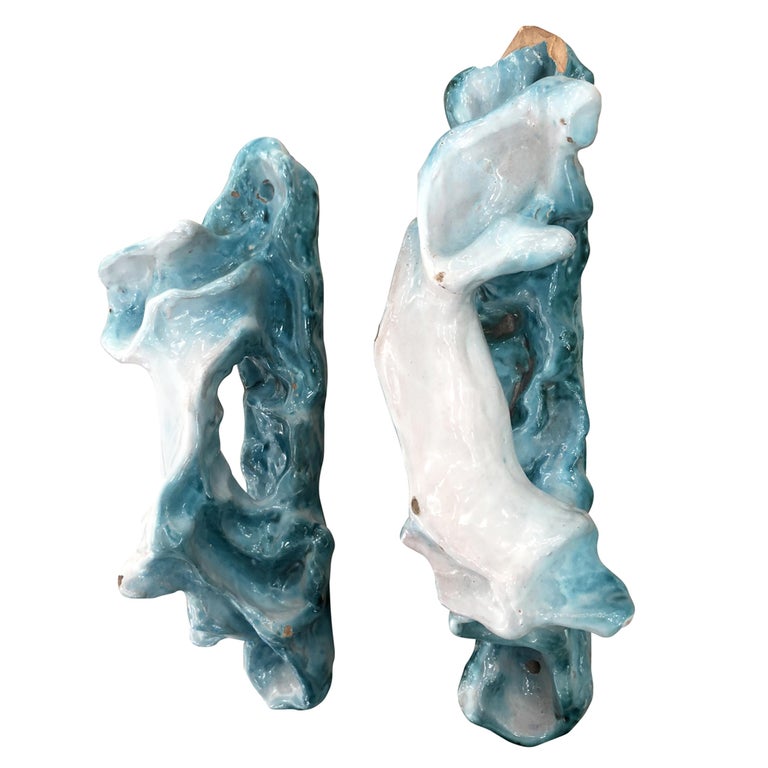 “These ceramic handles are jewelry for your furniture or doors. Beautifully abstract, they are like uncut gems or precious shells worn down by the waves.” 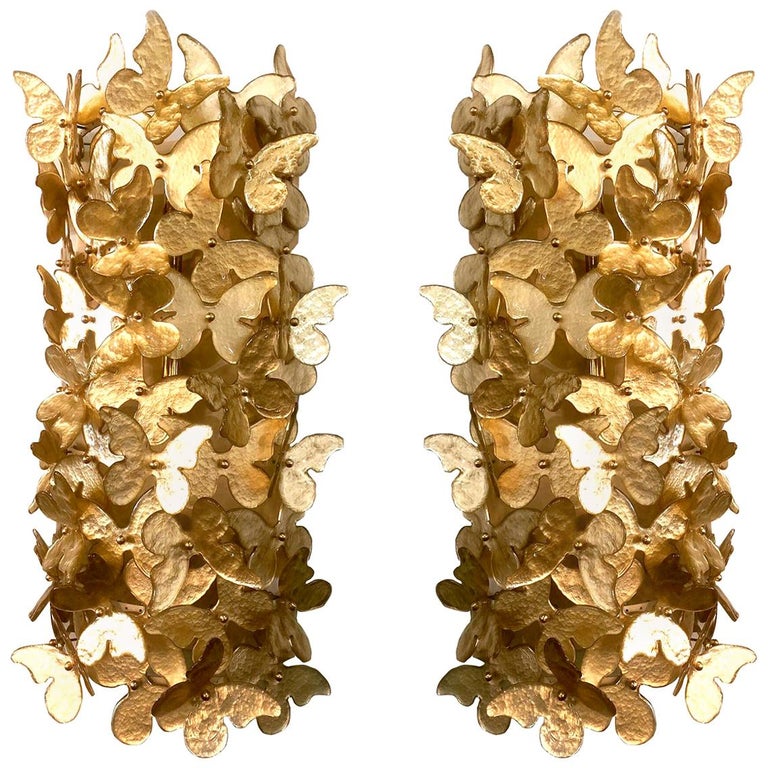 “More and more designers — myself included — are exploring the uses of glass. And this vintage piece, attributed to Barovier & Toso, one of the oldest family-owned Murano glassmakers, demonstrates the transcendent quality of the medium, reflecting the intricate beauty of nature. They would add an ephemeral, feminine touch to any space.”