How Addison Mizner Invented the Palm Beach Style of Architecture 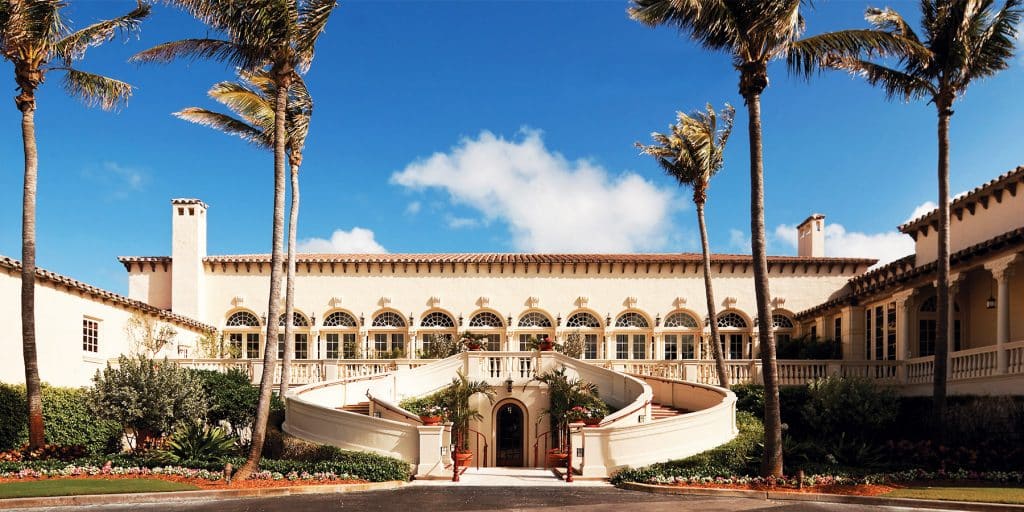 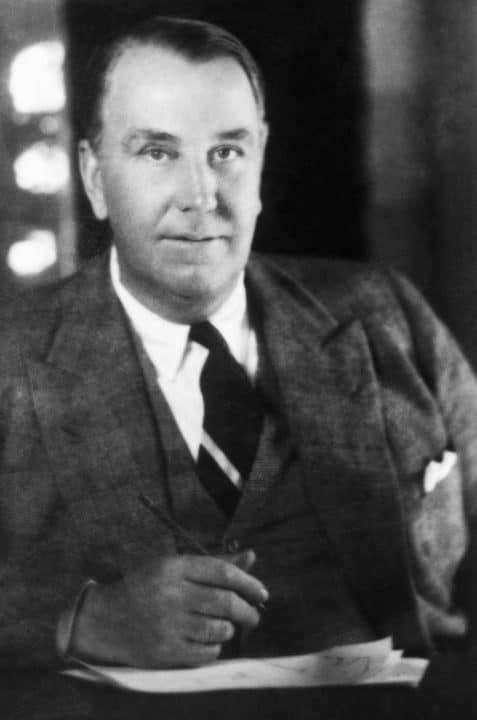 The architecture of Palm Beach has always captivated me, and not for the usual reasons. The buildings, especially ones designed by Addison Mizner, record a history that really never existed, embodying the idea of a centuries-old aristocracy and connoisseurship of the decorative arts.

Mizner’s client list populated the pages of social registers, newspapers and ultimately history books. He designed for America’s Gilded Age nobility — Vanderbilt, Stotesbury, Phipps, Rasmussen, Munn, Moore and more — giving them houses that were lavish and grand. But his particular genius as an architect was that his buildings seemed more storied than their owners, no matter who occupied them.

These houses — and the seaside town itself — epitomize an era in which architecture offered up the possibility of an instant pedigree. And Mizner’s unbounded imagination and vast knowledge produced structures that defined Palm Beach (and indeed much of Florida). 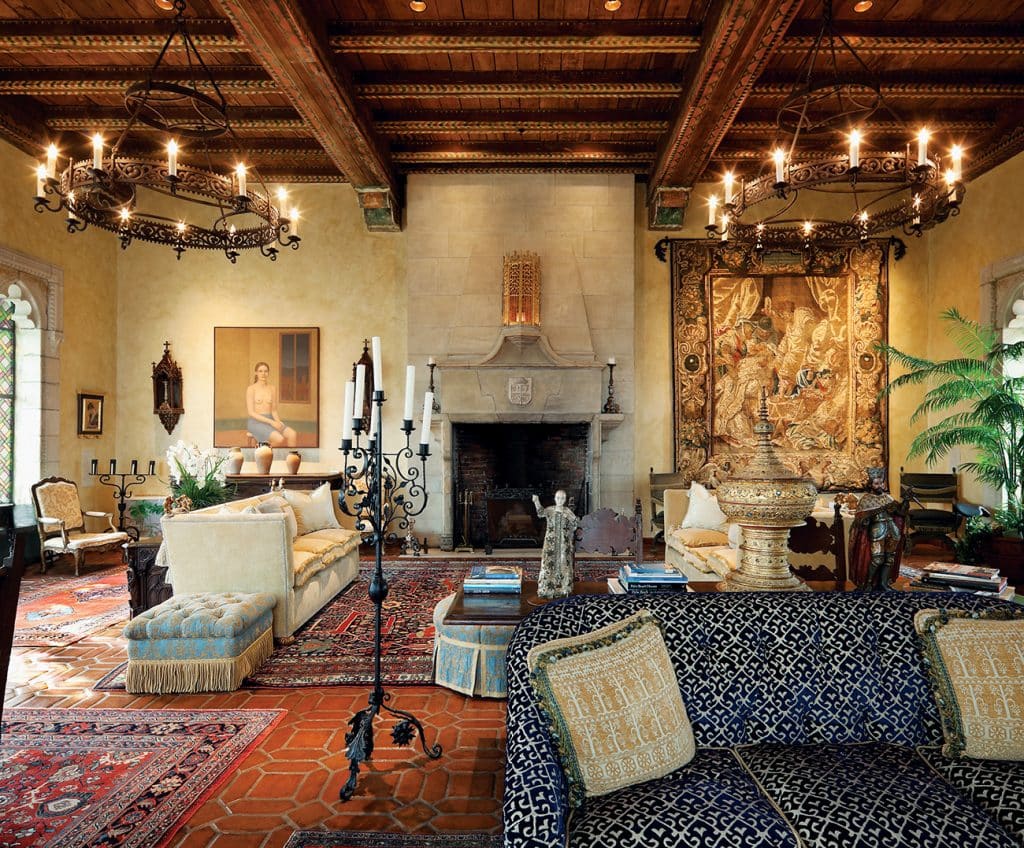 His buildings are different from anything already known, an invented architecture presenting a fabricated history — houses filled with parts of palazzos (shipped from Europe after summer buying sprees) or ornamental elements manufactured in Mizner’s own shops in West Palm Beach. Even today, my favorite description of Mizner’s style remains the oft-quoted one from pundit Alva Johnston’s 1953 book on the architect: “Bastard-Spanish-Moorish-Romanesque-Gothic-Renaissance-Bull-Market-Damn the Expense Style.”

I never thought of that as a denigrating characterization (I do think there’s room for irony here and there), nor do I think it implies that Mizner’s work was superficial, although it was subjected to decades of critical derision. That judgement has been put to rest by more recent scholarship, including my new book, Addision Mizner: Architect of Fantasy and Romance (Rizzoli), which has gorgeous photographs by Steven Brooke. 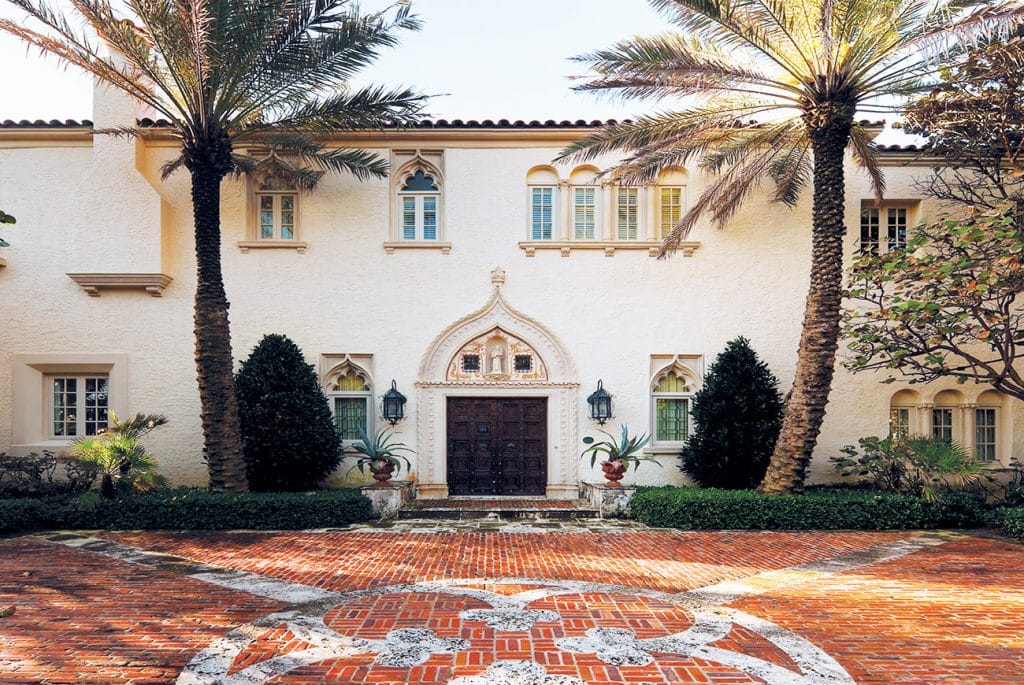 Villa Flora was described in the Palm Beach Post as the “envy and despair” of all the homeowners’ friends. The facade features Byzantine-influenced doors and Venetian windows.

A bit of background: Mizner came to Palm Beach in 1918 at the request of his friend Paris Singer, the sewing machine heir. Together, they created what became the Everglades Club. Although conceived as a nursing home for returning World War I soldiers, it soon segued into something more permanent and rarefied and still sits at the western end of Worth Avenue as an architectural (and social) symbol of wealth and exclusivity.

From that followed commissions for Mizner: great houses and commercial buildings in Palm Beach, the Gulfstream Club in Manalapan and the development of Boca Raton, including the Cloister, which is now part of the much-larger Boca Raton Resort and Club.

In the past few years, the architect has been the subject of three contemporary biographies that delve into his life in some depth. In Addison Mizner: Architect of Fantasy and Romance, I opted to look through the lens of architectural and intellectual history, with the help of numerous contemporaneous newspaper accounts, some of them newly available because they had just been digitized. 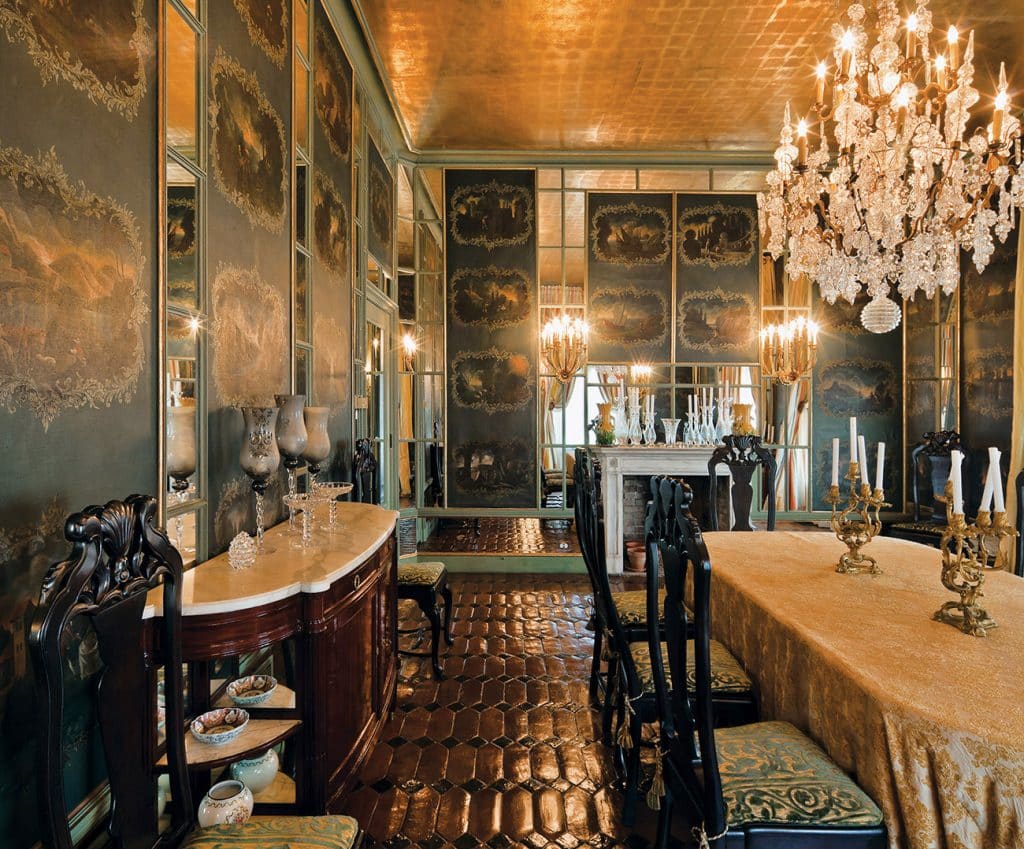 Edith Oliver Rea commissioned Mizner to create several additions to her home, Lagomar, which he had designed for the previous, original owner, working closely with the architect and remaining friendly with him until his death. When Rea died, the house was sold and broken into two parts. The original dining room was lost in the division, but most of the original doors remain.

An additional source was Mizner’s scrapbook collection, found in the archives of the Society of the Four Arts in Palm Beach and also newly digitized. The 25 volumes cover buildings in Greece and Rome, the Renaissance in general and such details as cloisters or chimneys. Almost wordlessly, they provide a window on his voracious interest in the nuances of architecture and the decorative arts throughout history and profound insights into the fodder that fueled his imagination.

The houses we show in the book are all remarkable examples of the designer’s craft, each a brilliant compilation of style and substance. What has always captured my imagination is Mizner’s adept use of rustic, even pedestrian, materials in ways that make them look important and even extravagant. He could take wrought iron, red clay and worm-riddled wood (often aged artificially by the architect’s workmen) and add them to rooms that might contain architectural artifacts (like the Spanish octagonal ceiling in Lagomar, the Mediterranean Revival–style mansion he designed for John Magee) imported from European villas and palazzos.

Mizner built El Solano for himself in 1919 but almost immediately sold it to Harold S. Vanderbilt. Among its most notable owners were John Lennon and Yoko Ono, who purchased it in 1980. Ono kept the house for five years after Lennon was shot and killed.

It is this combination of invented and actual antique objects that gives Mizner’s houses their magic. Add to this the fact that many of them bore witness to history, and the homes gain even more significance. Two notable examples are La Guerida, which was owned by the Kennedy family for more than six decades, and El Solano, which Mizner built for himself then immediately sold to Harold S. Vanderbilt and which was later owned by John Lennon and Yoko Ono.

And forgive me for being a contrarian, but most of Mizner’s home are sublimely unfashionable in these days of monochromatic white rooms and minimalist interiors — color from the Frank Stella on the wall, period. I love looking at the vital, overstuffed rooms with carved and painted ornament and upholstered furniture and a Canaletto or even a hunt-scene painting on the wall. We enjoy this style on Sunday nights when we tune in to PBS, and it is no less engaging in the houses shown in Addison Mizner: Architect of Fantasy and Romance. 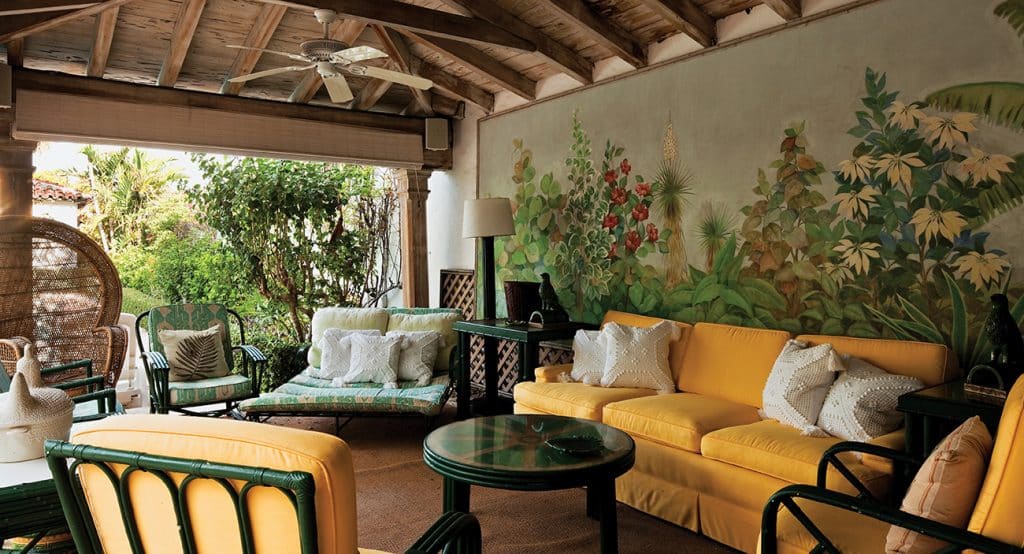 Louwana, a three-story, 10-bedroom estate that stayed in the same family from 1919 to 2015, was famously the subject of an erroneous legend that Mizner forgot to put in a staircase. In actuality, he removed the original staircase and replaced it with one based on a design he had seen in a palazzo in Venice.

The great Rizzoli editor David Morton conceived this book in conversation with both the photographer Steven Brooke and me. We worked on it over a number of years, so long that David retired along the way, leaving us in the capable hands of Douglas Curran. We wanted to show houses and other interiors that had not been dramatically altered over the years, to highlight architectural details that pointed up Mizner’s great genius. With our editorial assistant, Amie Edmiston, we identified as many intact houses as we could. Then, we wrote. We called. We wheedled. We pled. We cajoled.

La Guerida, built for department store scion Rodman A. Wanamaker, was purchased by Joseph P. Kennedy Sr. (at a Depression-era bargain price) in 1933. The home remained in the family for nearly 60 years and was known as the Winter White House during John F. Kennedy’s presidency.

Some homeowners said yes to us immediately. Others took a bit more persuading. A few said no. The project took long enough that some houses have since changed hands, but we were seeking the timeless moments in the architecture and design and the lessons to be learned. I hope we captured them. Beth Dunlop was the longtime architecture critic for the Miami Herald and is the former editor of Modern magazine.