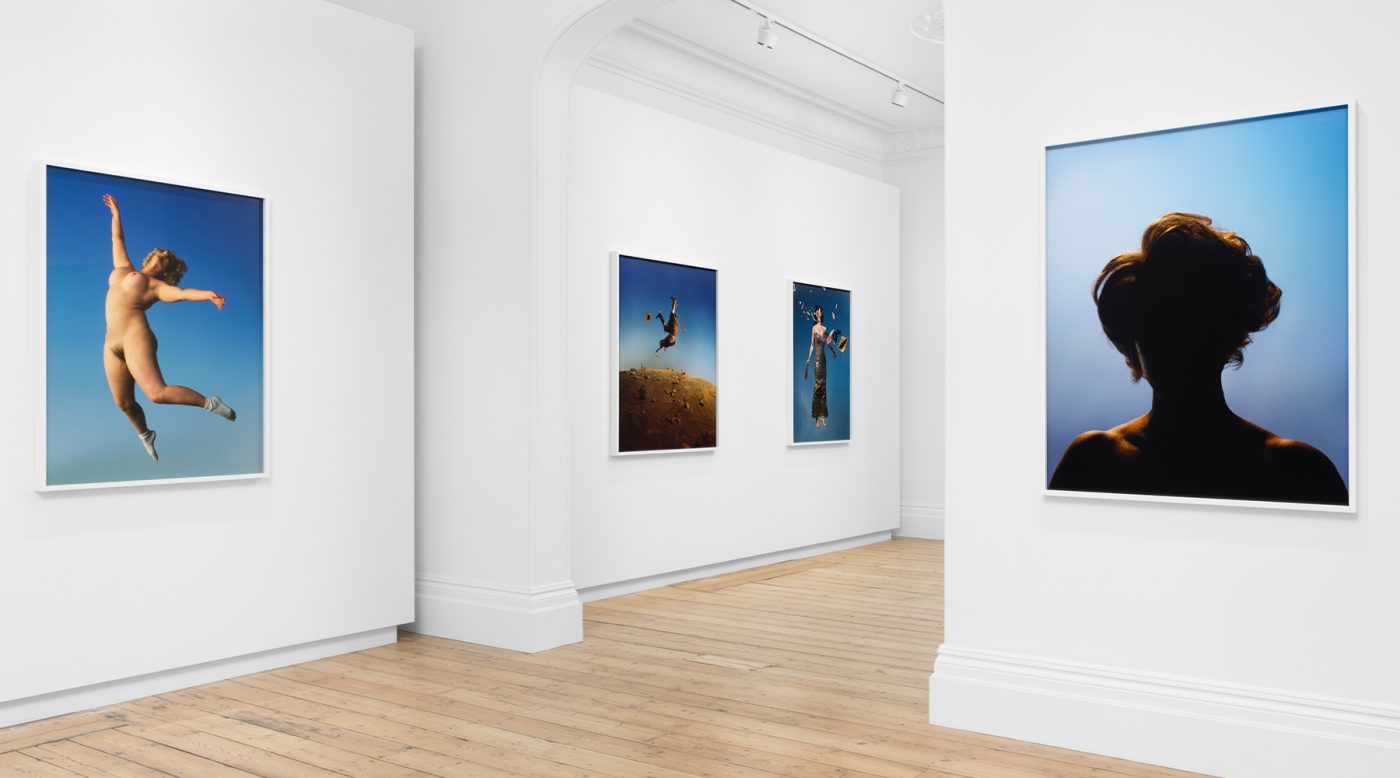 February 13, 2022Through March 5, the London branch of Lehmann Maupin gallery is exhibiting a new suite of 10 pictures by the Los Angeles photographer Alex Prager. As befits her cinematic style, the series is titled “Part One: The Mountain.”

Prager, 42, has made a name for herself with boldly colored, elaborately staged images that feel like stills from the most emotionally intense movie you’ve ever seen — no surprise that she makes films, too.

Nine of the photographs in “The Mountain” each feature a single person, beautifully caught in midair — a woman in a Chanel suit, for example, floating beneath her shoes and bag (Afternoon); a cowgirl flipped topsy-turvy (Twilight), a nude woman defying gravity (Dawn). But are they falling downward or rising up in some kind of rapture?

The 10th image, Eclipse, is a mysterious backlit headshot of a woman whose face is obscured, with only her hairdo and shoulders illuminated. She might be a stand-in for the photographer herself, directing things from the shadows.

Introspective spoke with Prager to find out what it all means and why she makes her art.

What does “The Mountain” signify?

I came to this show during lockdown, as we’ve been caring for our health and second-guessing our future and all those fun things. I’d been struggling with how to move forward and felt a loss of control, even though, as an artist, I had the luxury of being able to find creative ways to stay busy and distract myself.

It felt appropriate to go back to something that has been used as a symbol in storytelling and mythology since the beginning of time.

Would that be the mountain as a forbidding obstacle?

Some people can see it as that. Once you get to the top of the mountain, you can see from a much greater perspective. It’s where people have gone for centuries to have moments of revelation about themselves, about their future, about life and spirituality.

And it’s a place people tend to look toward as a symbolic place for a spiritual death and rebirth, which is very much what the show is about.

To me, the photographs feel like they’re about freedom and release somehow.

That’s great. I’m glad that you get that from them. I guess with movies, I want the whole story told to me. But with pictures, I think it’s about the interaction with the audience. The audience putting its own take on it is fifty percent of the whole deal.

Humans need to see themselves to understand themselves. So, I was really approaching it as offering some medicine for the moment. And the medicine that I make always has a bit of fun in it, a bit of humor.

What is the process of making these? It looks complicated, like the work of many hands.

I don’t really like to talk about the process so much. It’s more interesting to leave it up to people’s imagination. But I can say I really look at the team as collaborators. I love preproduction, because it’s where I start to see what I initially imagined starting to come to life.

The emotional aspect is the impetus for any body of work that I’ve ever done. So, it usually starts with a very strong emotion that’s haunting me, and then I’ll find all of these locations and costumes and everything to support that.

What’s the next step?

Then, we start hiring subjects to shoot: either professional actors or my sister, my mom, my friends, people I find on the street, social media, professional stunt people. Then, we get on set, and everything goes out the window, and it’s madness.

I watch as the mistakes happen, and things don’t go as planned, and we run out of time. That’s where it gets really exciting — going into that unknown on the day of the shoot is where all the really good stuff happens.

You’re a Los Angeles native. Has its status as film capital entered your bloodstream?

It’s very much in my veins. I lived on Hollywood Boulevard for a large chunk of my childhood, and I was an actress when I was young.

You were? I had no idea.

Yes, which a lot of people don’t know. I was actually in an episode of Tales from the Crypt when I was nine. That was my first time being on a set with special effects. So, I have a deep love for all of that. It definitely left a strong imprint on me.

Did you do anything else in terms of acting?

I did a student film where a tree was growing out of my body. That was fun. And I did a lot of commercials — my biggest was for Domino’s Pizza. Anyway, all of this glamorous world of acting stopped for me at around age ten.

It was something I did when I was a kid, and then, I realized I didn’t want to be in front of the camera and that I was an artist. It wasn’t until many years later, when I started to make films, that I realized how ironic it is that I should come this far to go right back where I started.

I saw in your bio something about an unusual teenage story, traveling through Europe by train and working at a Swiss knife shop — it sounded like a Hitchcockian setup.

One of these days, I’m going to re-create the knife shop that I spent so much time in, in Lucerne, and I’m going to make that movie. I was probably just on the verge of turning fourteen. I was a curious young woman, and I wanted more from life. I always want more, that’s one thing about me.

And I met this young woman who was also fourteen or so, and her family had a knife shop in Switzerland, in Lucerne. So, I convinced my family to let me go there with her. We extended our trip because we were having such a great time, and we were just released into Europe, young, wild and free.

It was actually the best decision, because I was always curious but never bad. I was at the exact point when I could have turned bad if my parents hadn’t given me more to bite into. And by their giving that to me, I actually became extremely responsible. There was nobody else there to fix things or get me out of a mess. It did the opposite of what people would think.

What was the trigger for you to discover still photography as art?

I was twenty-one and working three dead-end jobs, living a life that wasn’t really going to change unless I changed it — and I had that realization while I was sitting in my cubicle at one of my office jobs.

One day, I ended up at this William Eggleston exhibit, and I didn’t know anything about photography as art before then. I had this visceral reaction to what I was looking at.

What was that feeling?

I felt like there was some kind of magic happening. I wanted to expose myself to more of that magic, but I also wanted to find a way that I could affect people in a similar way. So, that same week, I bought a camera and darkroom equipment, and I was a photographer.

Who are the other photographers and filmmakers you keep going back to for inspiration?

For this body of work, it was Irving Penn’s Small Trades, August Sander’s People of the Twentieth Century and Robert Longo’s Men in the Cities. I always love what Cindy Sherman makes, and Philip-Lorca diCorcia, Gregory Crewdson and Jeff Wall.

They just can’t go wrong, in the same way Paul Thomas Anderson can’t make a bad movie and neither can Quentin Tarantino. They’re legends for a reason. Hitchcock always lives in me. And John Cassavetes and Robert Altman.

For me, that’s the trick — age just doesn’t really exist for artists. You get to just be ageless for your entire career. But it’s great to have this show. I feel that I finally have enough work for something like that. 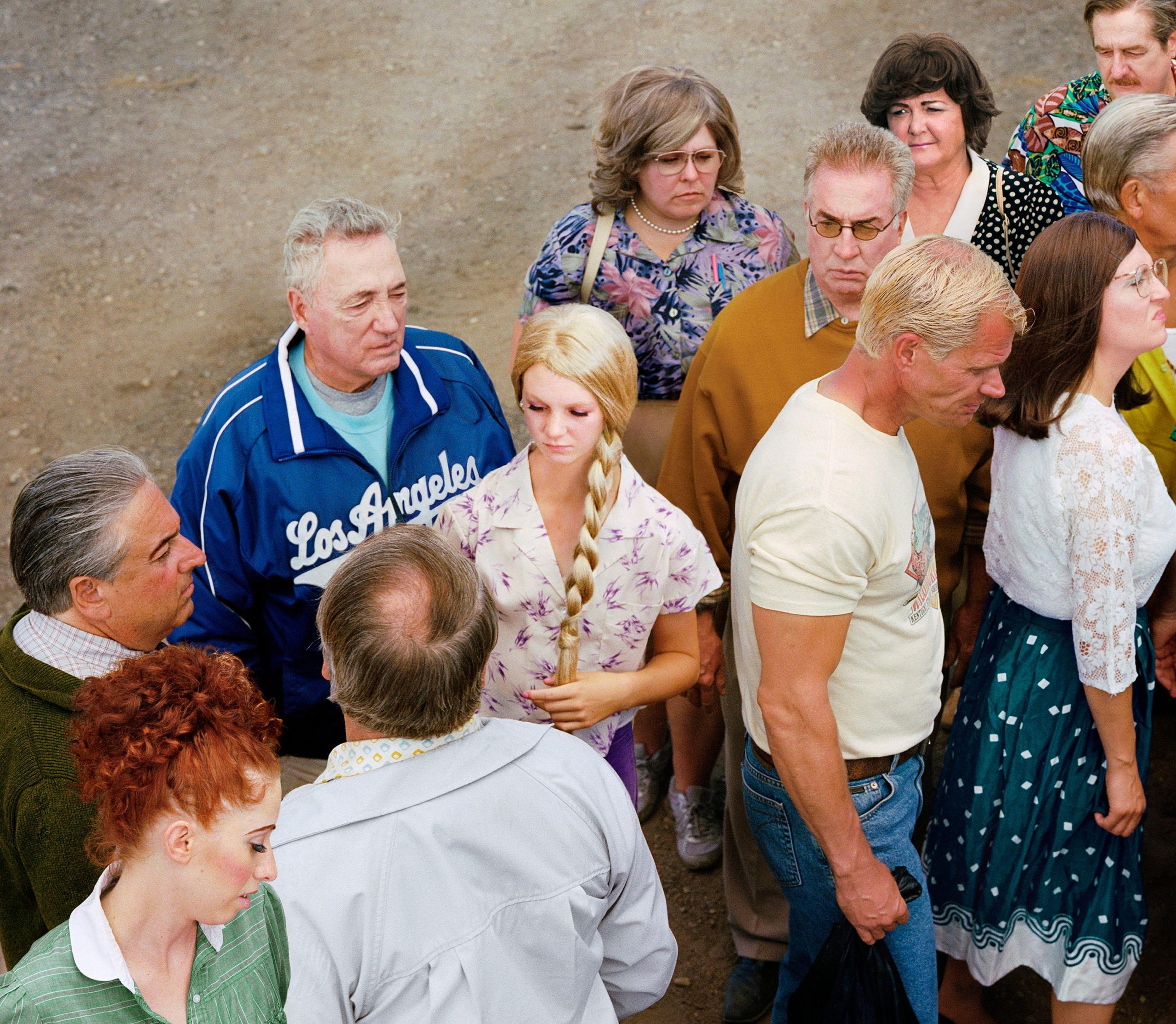