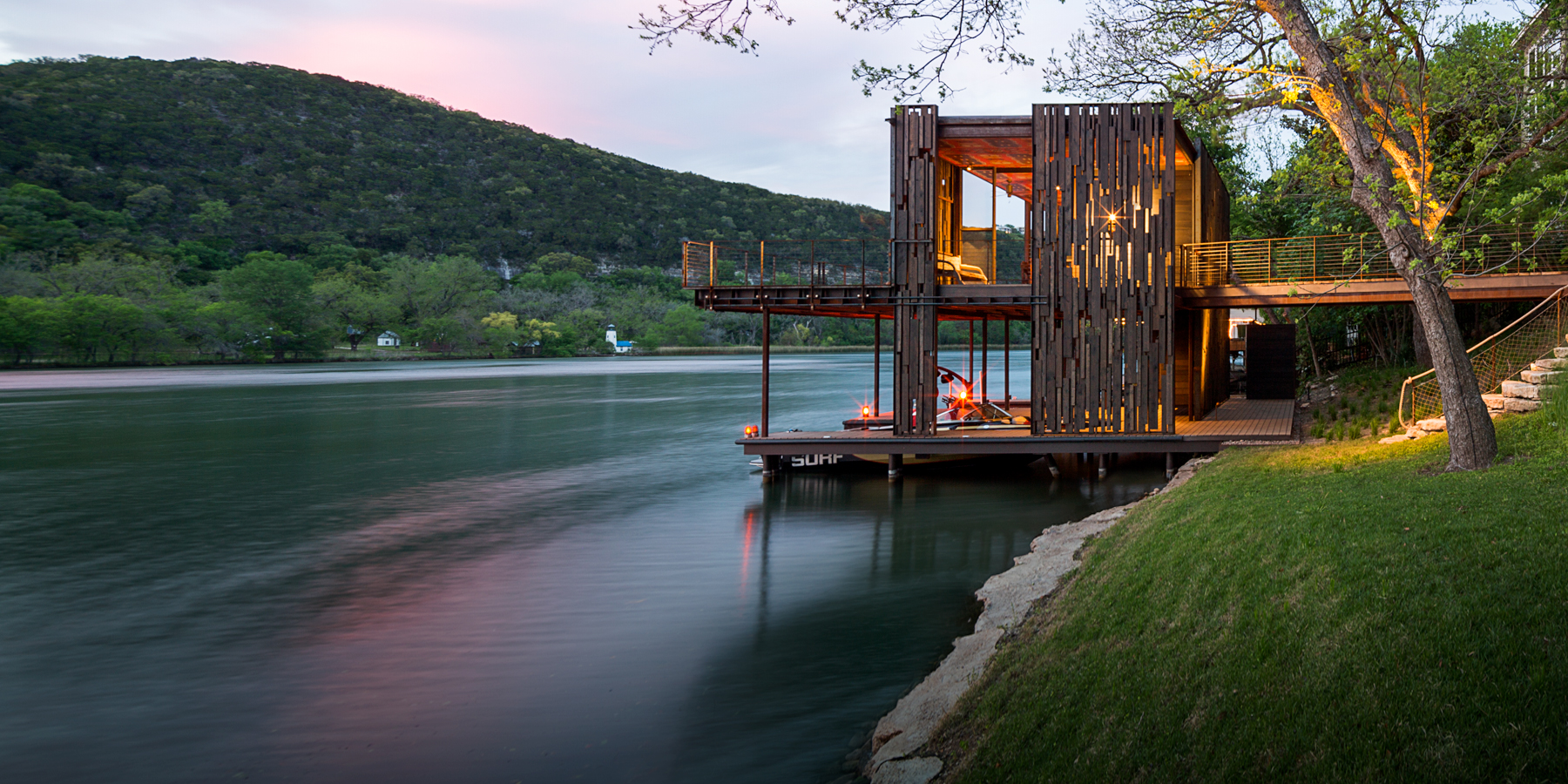 The Poetry of Place

The Austin architects Arthur Andersson and Chris Wise of Andersson-Wise specialize in creating modernist, eco-friendly buildings that seamlessly and ingeniously blend with their surroundings, whether a remote cliff in Montana or a lake in Texas. 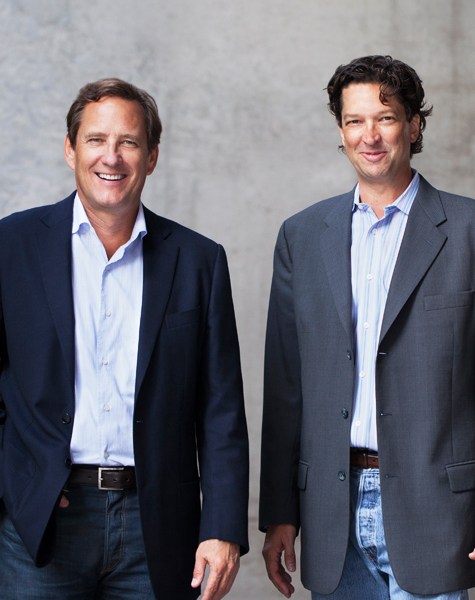 Architects Arthur Andersson (left) and Chris Wise founded their eponymous firm a decade ago in Austin, Texas (photo by Jessica Pages). Top: A project called the Bunny Run Boat Dock in Austin graced the cover of the July 2014 issue of Interior Design (photo by Andrew Pogue)

When it comes to articulating a philosophy that guides their work, Arthur Andersson and Chris Wise of the 14-year-old Austin architecture firm Andersson-Wise let their clients do the talking: “We get a lot of comments about how our work celebrates nature through the use of materials and a rootedness in the landscape,” says Andersson. “And I do agree that our architecture is strongest and most poetic when it embodies the principles of the site.”

And what sites they are: Andersson-Wise has erected its elegant, elemental structures on verdant cliffs, beautiful beaches, severe desert mountains, park-like academic campuses and, in one case, a challenging trapezoidal lakeside plot with a steep grade, for which they conceived an angular house with a butterfly roof and a cantilevered, Plexiglas-walled infinity pool. (Many of these projects are on captivating display in the firm’s 2010 monograph, Natural Houses, to which I contributed several essays.)

Their adherence to passive-design strategies is especially appropriate in the extreme climates in which they often work, from sun-scorched Austin to frigid Montana. They’ll deploy alfresco water features to cool prevailing breezes before coaxing them indoors, and favor deep overhangs and thick north-facing stone walls that moderate sun penetration in the summer while buffering cold air in chillier months. Houses are oriented — and sometimes elevated — to dodge trees, straddle ravines and maximize panoramic views, offering inhabitants opportunities to survey the visual splendor of water, sky and vegetation from a place of comfort and refuge. Screened-in porches, corner windows, covered decks cocooned in billowing curtains, and walls of frameless full-height glass cleverly confuse the line between indoors and out. Case in point? A boat dock-cum-entertaining pavilion in Austin enclosed in peekaboo walls of staggered Western red cedar slats, which alternately enfold and unveil the living area. 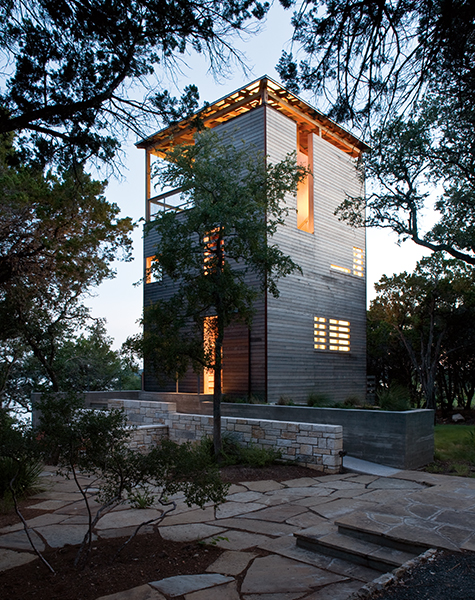 When designing an addition to a house on Austin’s Lake Travis, the architects opted to create a tower structure in order to take advantage of the views, minimize the building’s footprint on the site and protect the house from flood waters. Photo by Art Gray

Andersson-Wise’s residences are invariably clean-lined and reductive, free of self-consciously showy gestures. You will find no swooping facades or computer-generated complex curves in their portfolio — just walls that disappear with the turn of a hand-crank and crisp expanses of Douglas fir slats that segue into board-formed concrete. The duo is weary of contemporary form-making that exploits technology for gratuitously expressive purposes. “Architects keep getting more complex, and I don’t think the designs are particularly successful or communicative; it’s a bit like throwing a temper tantrum,” Andersson says. “We strive instead to create forms that are minimalist and resolved.”

While minimalist architecture of a certain era was faulted for prioritizing the manmade at the expense of nature, and being unsympathetic to inhabitants’ needs, Andersson-Wise’s syntax of rigorous geometry and glass planes is at once naturist and humanist. Interiors are designed for lounging, cooking, curling up with a book, gazing at fluffy clouds and entertaining in good company. Low ceilings and a Frank Lloyd Wright-esque syncopation of cozy and expansive volumes are used to conjure intimacy in monumental spaces. “In our office, we always talk about creating spaces on a scale that makes them seem more like a toy than a building — super dramatic but also very manageable and accessible,” explains Wise. 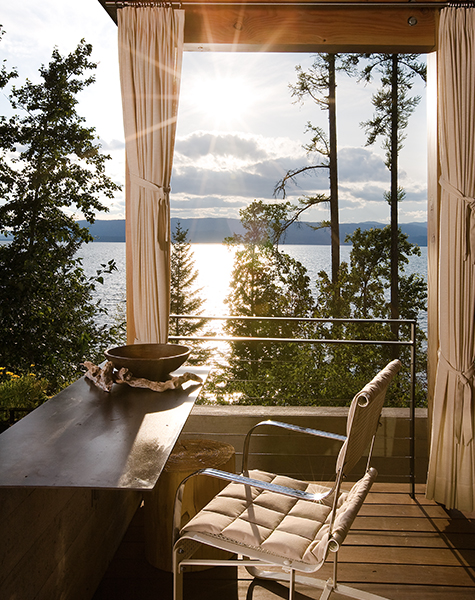 This people-centered approach reflects the firm’s roots: The co-partners launched the practice in 2001, after years spent collaborating at Moore/Andersson, the office of legendary postmodernist and educator Charles Moore, who made social responsibility a major tenet of the practice, and whose Austin studio Andersson co-founded in 1984. Working together at Moore/Andersson, Andersson and Wise discovered a shared sensibility and complementary, if overlapping, areas of expertise. Today, Andersson, who grew up in Southern California, Alaska and Colorado, and attended architecture school at the University of Kansas and the University of London, takes the lead on design concept; Wise, who was born in Pennsylvania, raised in Texas and earned his graduate school bona fides at Harvard, obsesses over the minutiae of craft and detailing.

Mind melds about inspirational works of literature and fine art (Barnett Newman’s abstract canvases, the writings of Henry David Thoreau) are a common occurrence. A current fixation is Richard Diebenkorn, whose “Ocean Park” series of paintings embodies principles they’ve explored in recent projects. “The impact of Diebenkorn’s paintings are the colors — the layering of blue on blue, dark on light — and the kind of spatial depth he was able to convey with a limited palette,” says Andersson. He notes how slim slashes of bright pigment form an ordering framework for the canvas’s variegated color fields. A similar juxtaposition of attenuated lines and painterly surfaces features in their design of Temple Dining Hall at St. Stephen’s Episcopal School, in Austin, for which they’ve completed six projects over the past decade (with one more currently under construction). Here, uber-thin structural columns interplay with walls of tinted stucco burnished to a mottled sheen — the kind of living finish that Andersson and Wise love. A like-minded sense of composition distinguishes a Montana abode that inverts the notion of a log cabin by means of a façade that mimics stacked cordwood framed in blackened steel. “We really commit to materials, using them almost like a graphic element,” says Wise.

“Architects’ levels of complexity keep increasing, and I don’t think the resulting designs are particularly successful or communicative; it’s a bit like throwing a temper tantrum.”

Painting is an apt analog for Andersson-Wise’s creative process. Finishes and building elements are chosen as an artist might hone in on a paint palette. “We’ll get samples of dirt, rocks and plants from the site to determine the appropriate set of colors, which leads us to the right materials,” explains Wise. And every project begins with Andersson creating an evocative watercolor of the proposed design that conveys not only its appearance and massing but also its atmospheric quality. “The drawings capture the overall mood and the character of light that we want to achieve,” says Wise, “and they become a touchstone as we finesse all the details.” The team refers back to this artwork throughout the entire design development and construction process, ensuring that the result is as much a piece of site-specific sculpture as a work of great architecture.