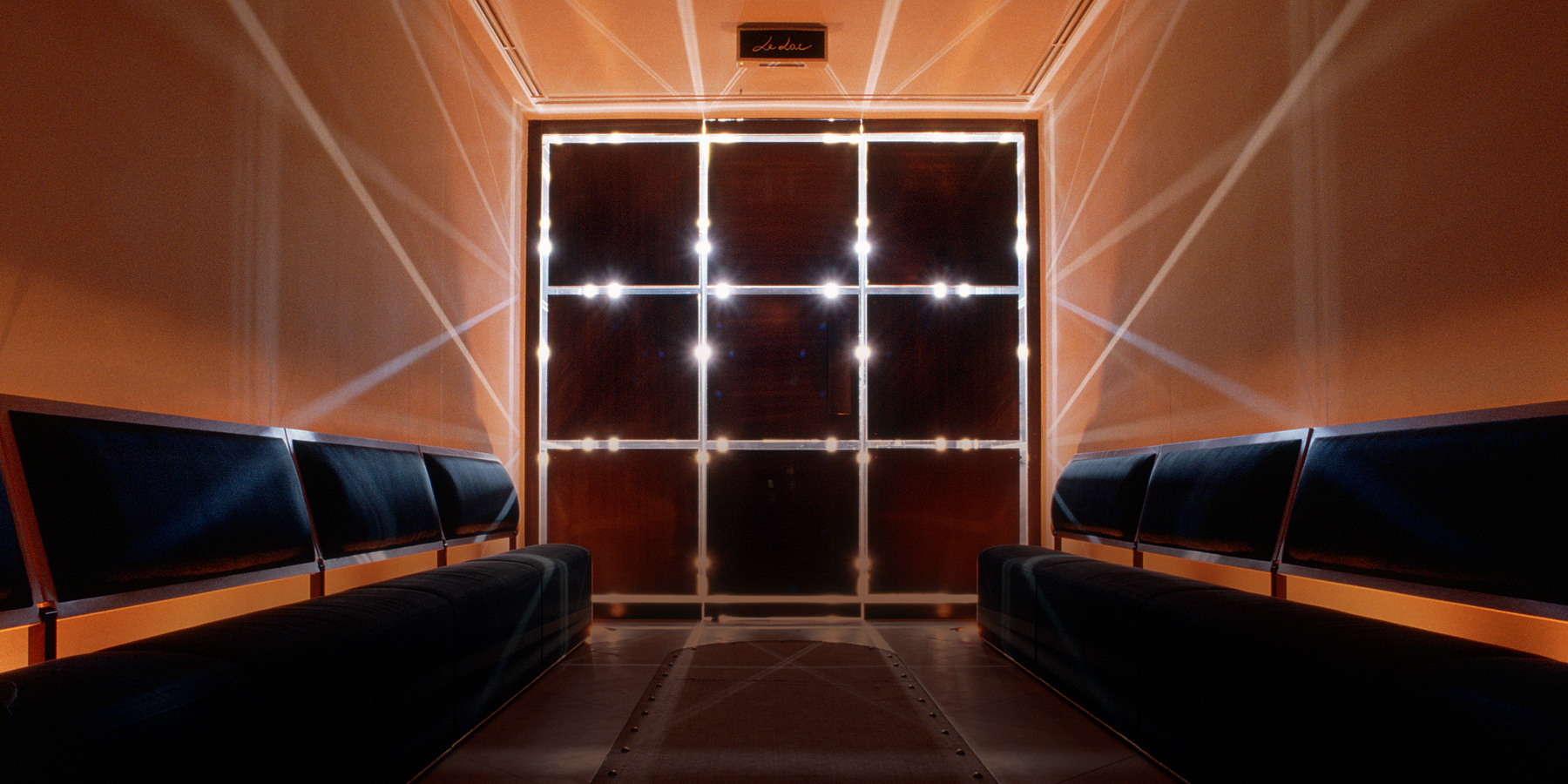 Take a loving look back at the life and legacy of French designer Andrée Putman, whose recent death now leaves her vast aesthetic empire in the more-than-capable hands of her daughter, Olivia. 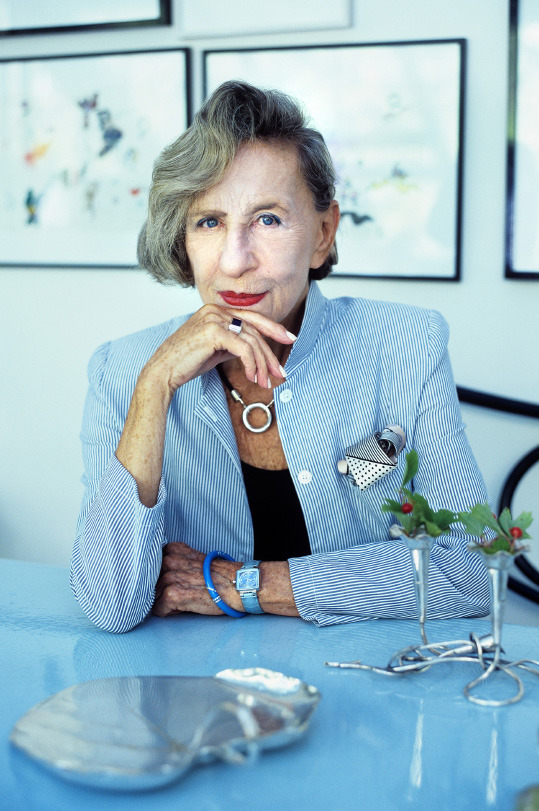 July 2013Andrée Putman, who died in January at the age of 87, defined modern elegance for much of the last century (photo by Xavier Béjot, Tripod Agency, 2007). Top: An interior designed by Putman in 1989 for Hotel Le Lac in Japan (photo by Deidi Von Schaewen).

When French design legend Andrée Putman died in January, at 87, she left behind a legacy nearly seven decades long. In interiors ranging from boutique hotels to grand residences, and from custom furniture to products for international companies, her work was eclectic, iconic and, above all, always quietly luxurious. Now, as the 1stdibs family, and the aesthetically minded world at large, continues to mourn her passing, we celebrate the woman who defined modern elegance for so much of the last century — and introduce you to her talented daughter, Olivia Putman.

There have been few 20th-century designers more influential than Andrée Putman. Her work spans what feels like the full breadth and depth of interior and product design, and the list of companies with which she collaborated over the years varies both stylistically and geographically, ranging from Christopher Farr and Ralph Pucci to Louis Vuitton, Bisazza and Poltrona Frau, to name just a few of the many that benefited from her exceptional eye.

But of all her many creations and innovations, the project she may best be remembered for is her 1984 design of Manhattan’s Morgans Hotel — the property that inaugurated the era of the boutique hotel. Putman’s first high-profile project in the United States, not to mention Ian Schrager’s debut as a hotelier, Morgans was the epitome of the Putman aesthetic, an elegantly minimalist composition of black, white and gray. With it, she revolutionized hotel design at a time when “chic” previously meant reproduction 19th-century furniture and chintz bedspreads. 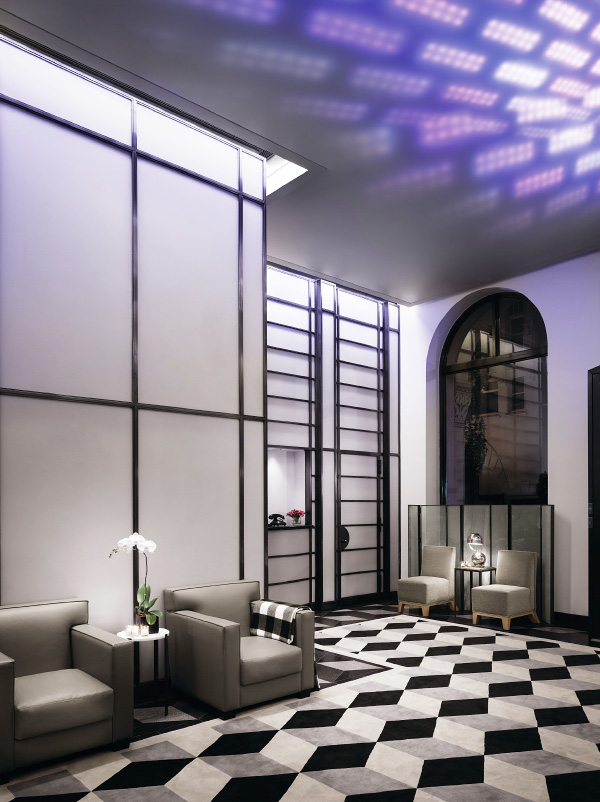 Putman’s minimalist design for Ian Schrager’s Morgans Hotel, which opened in New York in 1984, ushered in the era of the high-design boutique hotel and put Putman firmly on the aesthetic radar (photo by Nikolas Koenig, courtesy of Morgans Hotel Group, 2008). Putman furnished the hotel with classics by such early modernist designers as Jean-Michel Frank, Eileen Gray, and Robert Mallet-Stevens whose furniture she had begun reissuing through her then-nascent company, Ecart International. These notable names would become synonymous with Putman’s interiors, along with her monochrome palette.

When it debuted, Putman’s design for Morgans came as a complete surprise to most New Yorkers, who knew Schrager from his Studio 54 days. As his partner, Steve Rubell, explained in a New York interview in 1985, “Everybody expected our hotel to have go-go dancers in the lobby and disco music in the elevators.”

After Morgans, there was no turning back for Putman, and she went on to work for a diverse group of prestigious clients, including fashion guru Karl Lagerfeld and Jack Lang, head of the French Ministry of Culture, whose headquarters she would eventually create. Projects from the ’80s and beyond included museum interiors, a jewelry line for Christofle and private residences for global trendsetters. Putman would soon vary things even further, however, working on the design of film sets for British director Peter Greenaway, as well as conceiving the inside of Air France’s supersonic Concorde.

At every turn, Putman’s work proved itself the height of chic. A pioneer of a certain high-low, art-of-the-mix aesthetic, she daringly combined sumptuous cashmeres and luxurious leathers with affordable ceramic tiles and rough-hewn industrial metals. Similarly, she gave the same attention to the detail in a design for a simple necklace as she did to the furniture collections, grand offices and entire spa hotels she created. In his 2009 book, Andrée Putman Complete Works (Rizzoli), author Donald Albrecht, the curator of architecture and design at the Museum of the City of New York, described Putman’s work as “the embodiment of ‘French Style’ — luxury tempered by restraint, cool geometry enriched by warm sensuality.” 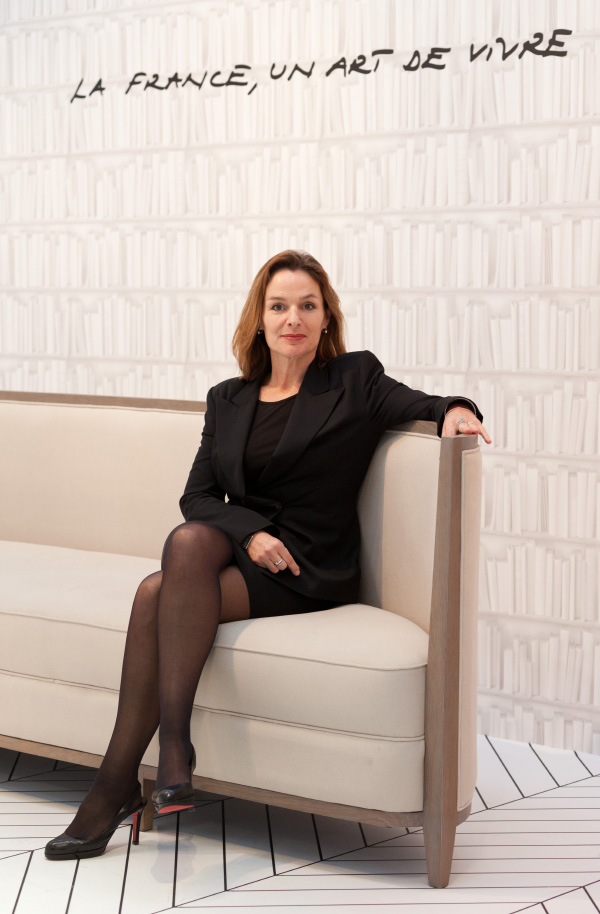 Today, the Putman legacy lives on in the designer’s 49-year-old daughter, Olivia, to whom she passed her business after she decided several years ago to retire from actively managing Studio Putman. Olivia’s inheriting her mother’s design mantel, however, wasn’t always a foregone conclusion: For many years, the two seemed to be moving in very different creative directions. “I studied art history at La Sorbonne, in Paris, and concentrated on contemporary art and the Italian Renaissance,” says Olivia. “And then, after spending ten years transforming old factories and abandoned buildings into artist’s studios and exhibition spaces, I went back to school to become a landscape designer.”

Through her interest in art, Olivia became involved in the land art movement, and, in 1994, she worked with artist Jean Paul Ganem on a project called “Les images du plaisir: Intervention,” in the fields of western France. As a result, she started to design more permanent gardens of her own, winning the Dream Garden Prize at the Garden Festival of Saint-Cloud outside Paris in 2000. It was at this point that Olivia finally joined forces with her mother, working as a landscape architect on commissions that involved open spaces.

In 2007, she stepped into her current role as art director and CEO of Studio Putman, curating “Andrée Putman: Ambassadrice du Style,” a grand 2010 retrospective at Paris’s Hôtel de Ville that showcased the wide range of her mother’s designs over the last 40 years. “When I was younger I was not really ready to join my mother, although she wanted me,” recalls Olivia. “Eventually, though, I came to understand that it was important to help her and continue what she had built. She loved looking at what was happening when she stepped away.”

Olivia grew up in a very creative household, of course, and not just because of her extraordinary mother. Her father, the late Jacques Putman, was an art collector, editor and critic, and the family, which also includes her brother, author Cyrille Putman, lived in the very center of artistic Paris. Putman mère, in particular, knew everyone who was new and interesting: As a stylist for many French magazines, she worked with fashion designers Issey Miyake, Claude Montana and Thierry Mugler and counted Louise Bourgeois and Andy Warhol among her friends. 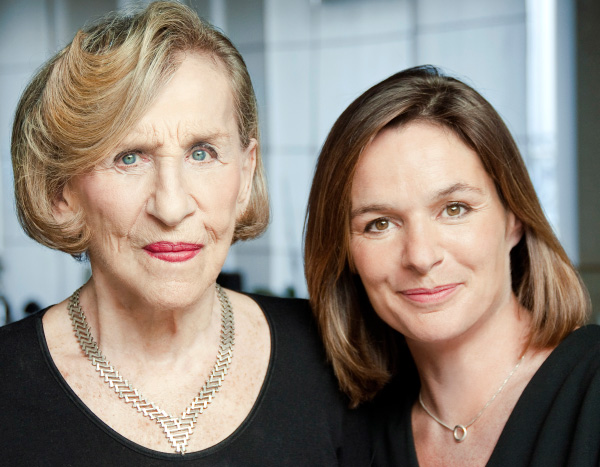 Putman mère and fille posed for a portrait shortly before the elder passed away earlier this year. Photo by Xavier Béjot

Married to Parisian auctioneer Christophe Joron-Derem, with whom she has two lively children, Olivia has continued the creative-home precedent set by her parents. “I like to display art and personal things that are part of my life,” she says, adding with a smile, “I have two boys, though, so my house is less tidy than Andrée’s was.”

These days, Olivia leads the company in much the same manner that her mother did — but with a personal twist. “I love product design because it is faster than interior design, and this is what I am trying to develop right now,” she reveals.

To that end, the firm recently designed furniture for Serralunga, as well as the offices of the Fédération Nationale des Travaux Publics. Nespresso is expanding the award-winning “Ritual” collection Olivia created, and, in 2011, as art director for Lalique, she presented the company’s new “Orgue” lighting collection at the Salon Maison et Objets. She has also translated her mother’s fabric designs for Pierre Frey, which are available only in Putman’s signature tones of black, white and gray, and, earlier this year, she redesigned Nina Ricci’s iconic L’Air du Temps perfume bottle in a more contemporary style.

When design companies lose their principal talent, they often have to close down. But today, the legacy of Andrée Putman lives on, thanks in large part to Olivia’s continuation and expansion of her mother’s work. “Unconsciously, I knew for ages that I would join Andrée one day,” Olivia confesses. “She asked me many times to join the studio, but I had to follow my own road before finally coming over. I think I was a little bit afraid to face such a big challenge.”