A Marriage of Talents 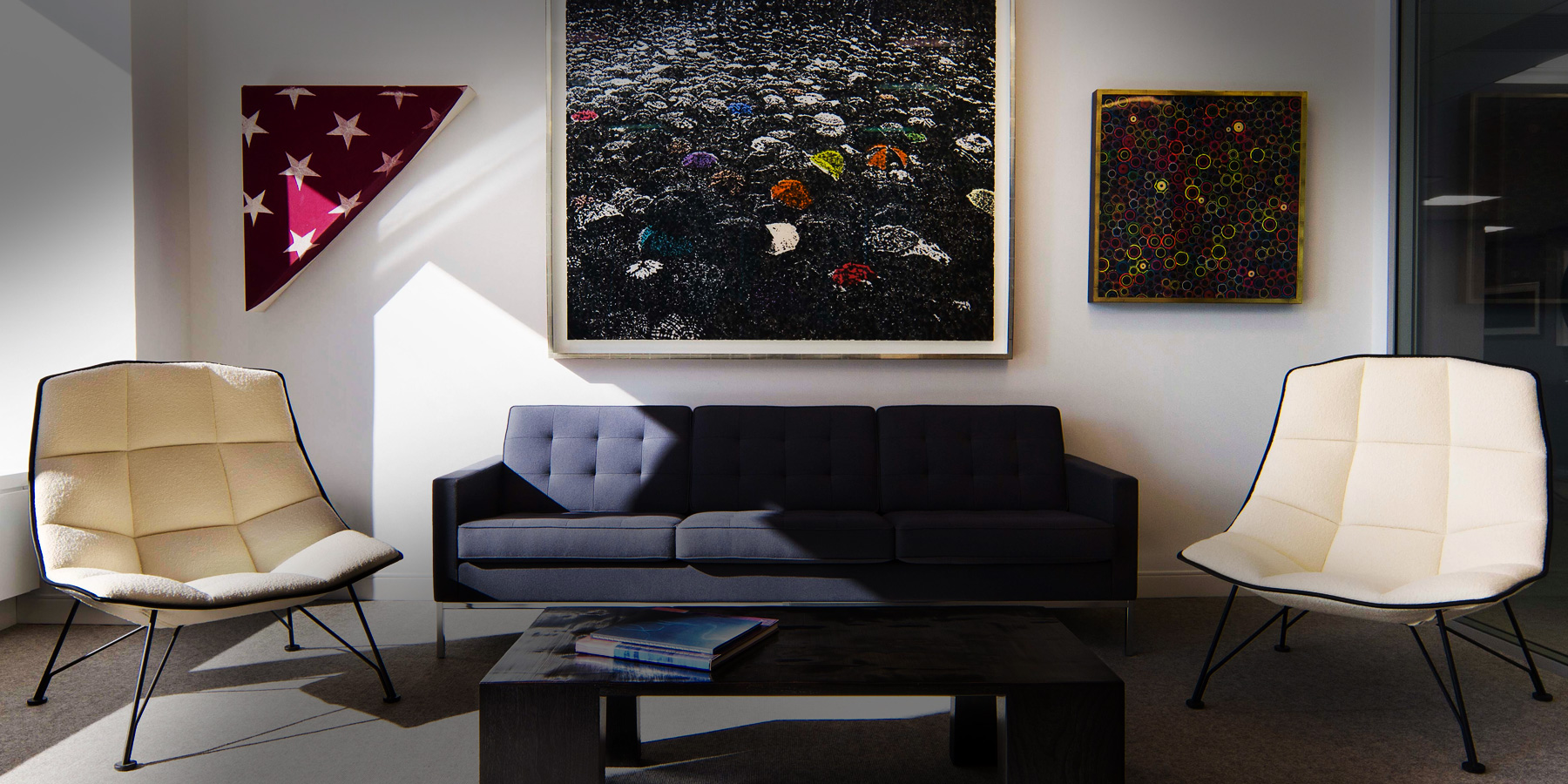 Ariel Ashe and Reinaldo Leandro, the young principals behind the New York interior design and architecture firm Ashe + Leandro, are increasingly enjoying high-profile commissions — and no shortage of celebrity clients — from L.A. to London and points in between. 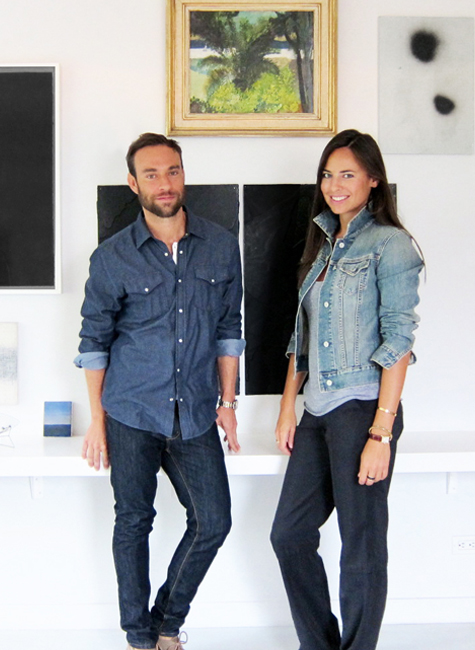 October 24, 2012Reinaldo Leandro, an architect, and Ariel Ashe, an interior designer, met while working at the New York firm Pierce Allen and started their own enterprise in 2008. Top: The pair mixed mid-century furniture with contemporary art to give a New York investment firm a residential feel. All photos courtesy of Ashe + Leandro

A recent autumn afternoon found the principals of the New York interior design firm Ashe + Leandro intently painting a pumpkin bright pink. The next day Ariel Ashe would hand-deliver it to Vogue for an online story featuring pumpkins decorated by fellow creative types. (A+L’s pumpkin, it should be noted, pays tribute to the Mexican architect Luis Barragán.)

Such incidental nuggets of publicity often seem to seek out Ashe and her partner, Reinaldo Leandro, much like the commissions that have stacked up, one after another, since the day they established their business in 2008. Ashe, who started out doing set design, and Leandro, an architect, first met as young associates at a midsized New York architecture and interior design firm and, a handful of years later, set up their own shop in a tiny space on Downing Street.

Just a few weeks ago, they moved to the northern edge of Soho into a larger office — that is, large enough that their chairs no longer clank together every time they roll them back from their desks. The impetus to expand came courtesy of the biggest project A+L has undertaken yet: a five-bedroom new-build (their first) on Martha’s Vineyard, comprised of three interconnected barn-style structures that combine a Cape Cod–gray exterior with an airy interior intended to showcase the owner’s contemporary art collection. This year also marks the firm’s first foray into Europe (their inaugural project abroad was a hotel in Leandro’s native Venezuela), with a gut-renovation of a Victorian townhouse in London’s Belsize Park belonging to Jonny Buckland, the lead guitarist of Coldplay. 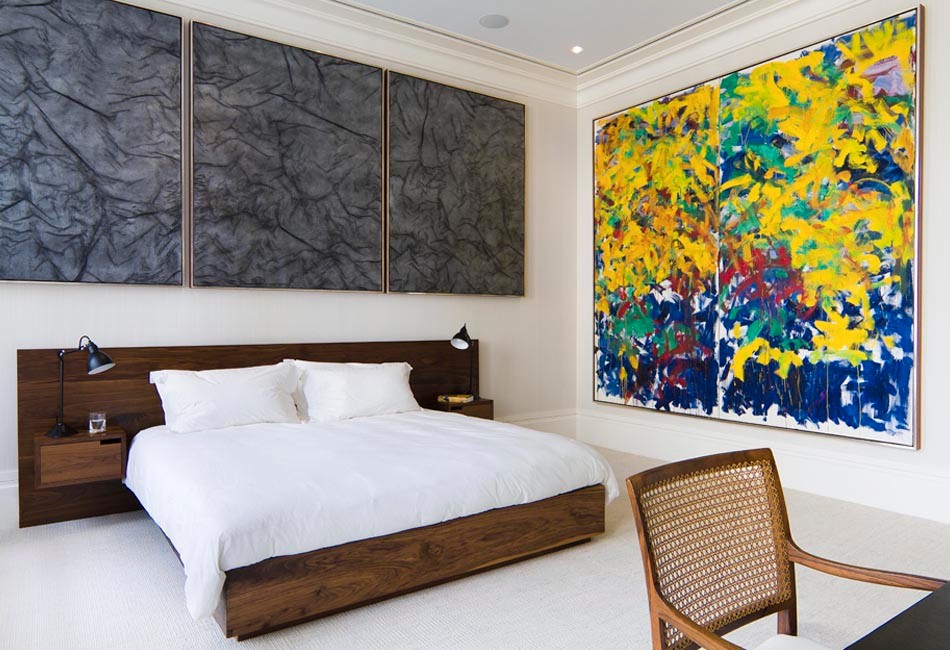 A+L designed a Park Avenue apartment around the owner’s art collection, which includes paintings by Rudolf Stingel and Joan Mitchell hanging above a walnut bed commissioned from DM/DM. 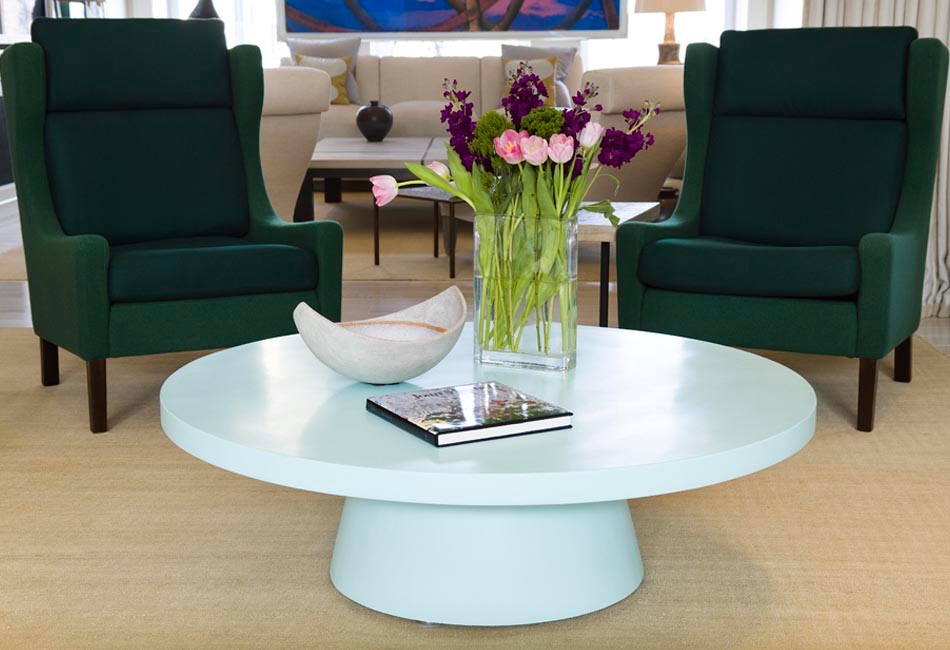 In the Park Avenue apartment, the mid-century chairs reupholstered in Holland & Sherry fabric are from the 1stdibs dealer Arenskjold, and the resin-coated wood table is by Elizabeth Paige Smith. 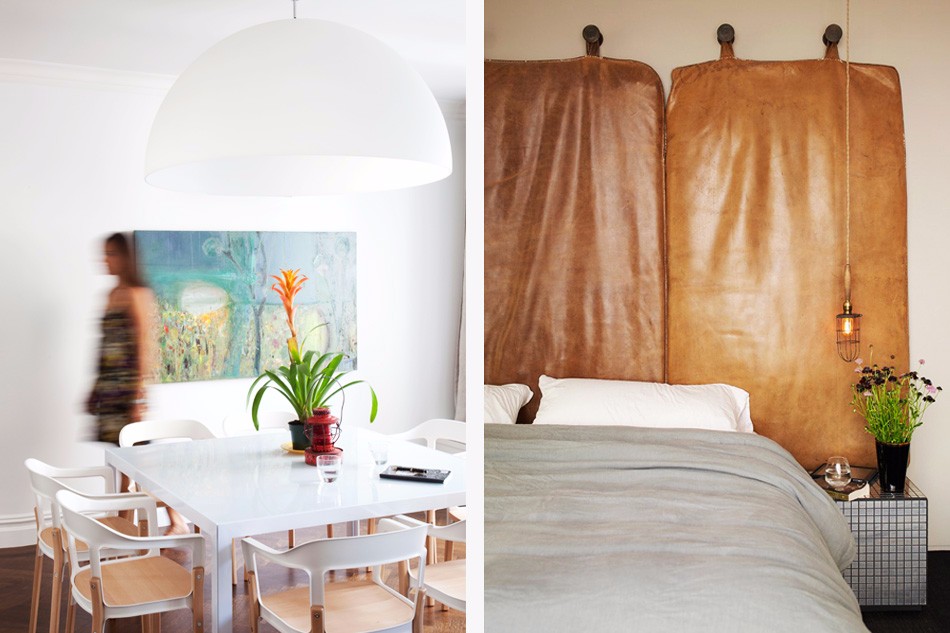 Left: At a Manhattan apartment, Magis Steelwood chairs surround a table from B&B Italia. The overhead light is Avico, and the painting is by Ashe’s cousin, the Los Angeles painter John Brown. Right: In another New York apartment, the pair created an oversize headboard out of vintage leather wrestling mats they found at a Paris flea market. The custom side table is by Studio Bronze and the bedding is Matteo. Photo by Lucas Allen 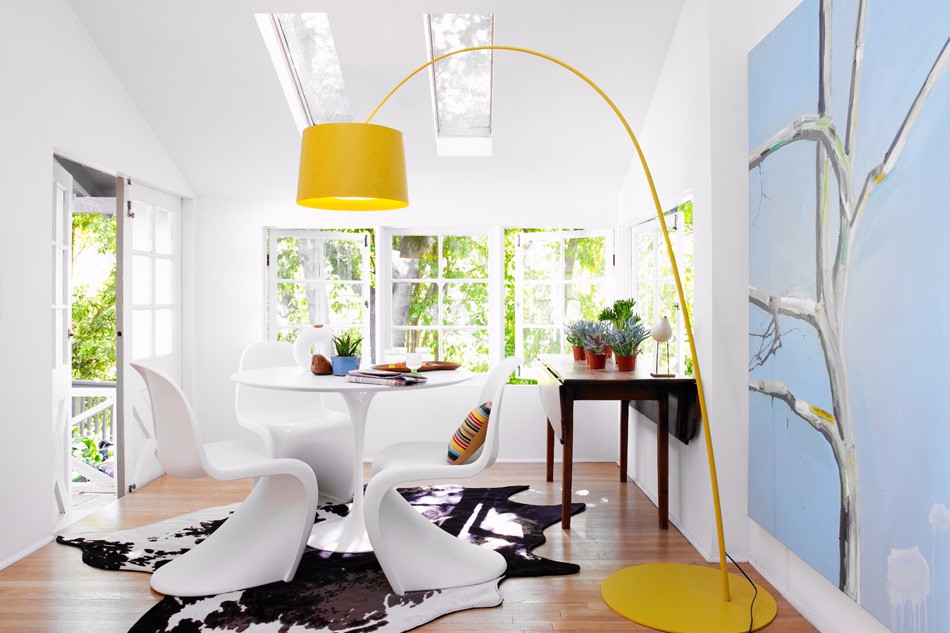 One A+L’s first projects was the home of actress Jennifer Carpenter in L.A.’s Hancock Park neighborhood. In the dining room, a Saarinen table and Verner Panton chairs sit atop a cowhide needlepoint rug from Dransfield & Ross; the Twiggy lamp is by Marc Sadler. Photo by Lucas Allen

Amid this rapidly growing roster of high-profile clients and projects, the two still acknowledge that their best asset is each other. Indeed, it’s rare to observe a pair that clicks so well both personally and professionally — the two take trips together (most recently to Nicaragua), daydream about getting a house upstate together and, on occasion, inadvertently show up to work wearing roughly the same outfit (see: flannel day; military-chic day). “We share a bank account; she bosses me around,” says Leandro. “It’s just like we’re married.” 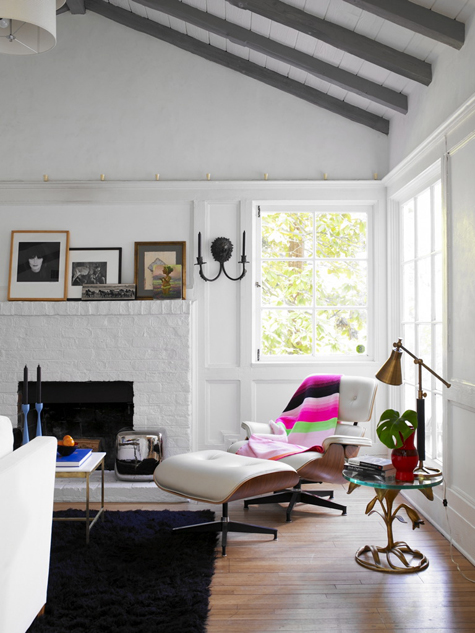 The pair brightened Carpenter’s home, a 1930s hunting lodge-style house, by removing the window treatments and coating the walls in Venetian plaster; the side table next to the Eames lounge chair is from Orange. Photo by Lucas Allen

Ashe: I studied set and lighting design at NYU’s Tisch School of the Arts. Then I worked at Saturday Night Live for the production designers and, next, landed at Pierce Allen. I figured set design and interior design were close enough. Working at Pierce Allen for five years was the best graduate school anyone could ask for. I met Reinaldo there, and we started planning a company before he left.

Leandro: I went to architecture school in Caracas, and, a year after graduating, I moved to New York to do the Masters of Science in advanced architectural design at Columbia University. It sounds fancy. My first job was at Pierce Allen, where I met Ariel. We stayed in close touch after I went to work for Skidmore Owings & Merrill for three years. I missed the smaller-scale aspect of design, the immediate gratification — as opposed to designing buildings that were five years out — and the personal relationship with clients. Ariel and I flirted with the idea of doing our own thing and, after realizing we had tastes that complemented each other, we thought, why not? Let’s do it. We are young, we like each other — it’s now or never.

Ashe: My early influences were all Broadway theater designers and the guys I worked for at SNL. Leo Yoshimura and Eugene Lee are talented television and theater designers who took me under their wing. My style as an interior designer is obviously influenced by DD Allen and also by my family. My dad is a homebuilder in New Mexico. He enlisted me to install tile from a young age. My mom is a talented painter and spent a lot of time cultivating our creativity as children.

Leandro: My parents have always been interested in art, and that shaped me a lot growing up. Caracas is a modern city, and the school I went to, La Universidad Central de Venezuela, is one of the greatest examples of modernism. Today it is even a World Heritage Site. I was very influenced by that type of tropical modernism architecture: a lot of concrete, which I love, primary colors, which sometimes I have to rein in, tile patterns and open spaces. 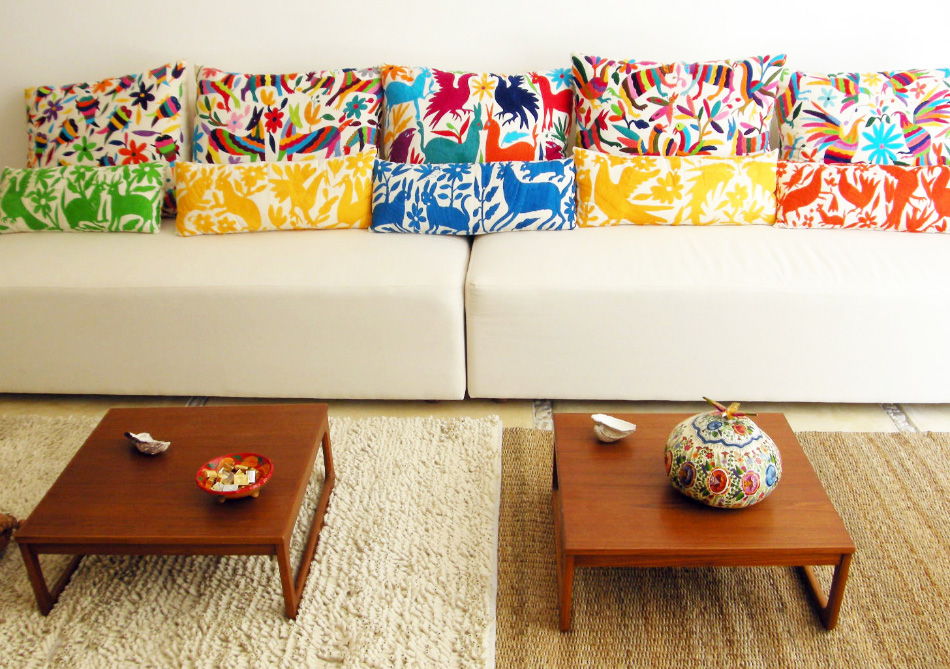 A beach cabana in the seaside town of Camuri, Venezuela, Leandro’s native country, is constructed from concrete, in case of flooding, and is enlivened by textiles from Oaxaca, Mexico.

Ashe: We timed the launch of our company with a seven-page spread on a home we did for the actress Jennifer Carpenter in O at Home. The article featured Jennifer and me playing Scrabble in a teepee in her backyard. I wouldn’t say we’ve had a big break, though. We are still a small office, and we have both hands in all of our projects.

Leandro: I think having a successful partnership has been the biggest break thus far — and keeping busy and doing work that we feel proud of. In terms of recognition, of course we are interested, but only because it will lead to bigger, exciting endeavors and new challenges. I am confident we’ll get there.

“I think having a successful relationship is our biggest break so far — and keeping busy and doing work that we feel proud of.”

Ashe: Travel and literature. Our second project together was a waterfront cottage on Martha’s Vineyard. We took inspiration from the home of Daniel Peggotty in Charles Dickens’s David Copperfield. We called the job Mr. Peggoty’s Boathouse. (Dickens wrote: “It was beautifully clean inside, and as tidy as possible. There was a table, and a Dutch clock, and a chest of drawers, and on the chest of drawers there was a tea-tray with a painting on it of a lady with a parasol, taking a walk with a military-looking child who was trundling a hoop.”) Recently we traveled to Nicaragua to learn to surf and were so inspired by the beauty of the dry season and the thatched huts we stayed, with their burlap sun-shades and polished concrete bathrooms. We came home and immediately added hammocks and a sun deck to a house we are designing on the Cape. I also love bringing home local textiles or having friends who travel bring me pillow covers, rugs, sarongs and so forth. I think the find of a lifetime was Barbara Sansoni’s Barefoot, a company that pays women in rural Sri Lanka fair wages to hand-weave beautiful, eco-friendly textiles.

Leandro: I would only have to add art to Ariel’s answer. I am very inspired by it. We both like discovering young contemporary artists. 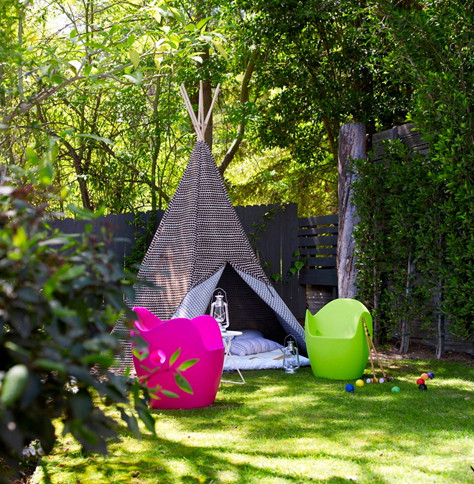 Carpenter had always wanted a yurt, explains Ashe, but owing to the petite size of her backyard, the designer suggested a tepee instead. To modernize the look, Ashe upholstered it in graphic fabric by Hable Construction and added neon chairs by Tord Boontje for Moroso. Photo by Lucas Allen

Ashe: I’m listening to a playlist I made in 2001 consisting of Clarence Carter, Paul Simon, Lauryn Hill, Ryan Adams, Nick Drake, Old 97s, Granddaddy, Sparklehorse and Nick Cave. Random, I know, but refreshing after a strict diet of contemporary country for the past five years.

Leandro: Music is dictated by others in the office. Ahem. My jogging mix is really trashy: Twin Shadow and lots of Rihanna.

Ashe: Reinaldo is the collector of the two of us. We both love Richard Aldrich. I was recently given a print of Adam McEwen’s Pop Art Is: Kate Moss Obituary. It’s really creepy, and I totally love it.

Leandro: I love Alice Neel, but funnily enough I have never purchased figurative art or portraiture.

Ashe: Christian Liaigre and Axel Vervoordt — which is weird because our work is nothing like either of theirs.

Leandro: Álvaro Siza and Eduardo Souto de Moura may be my favorite architects, both Portuguese. As for young firms, I really like what Leong Leong Architecture has been doing. 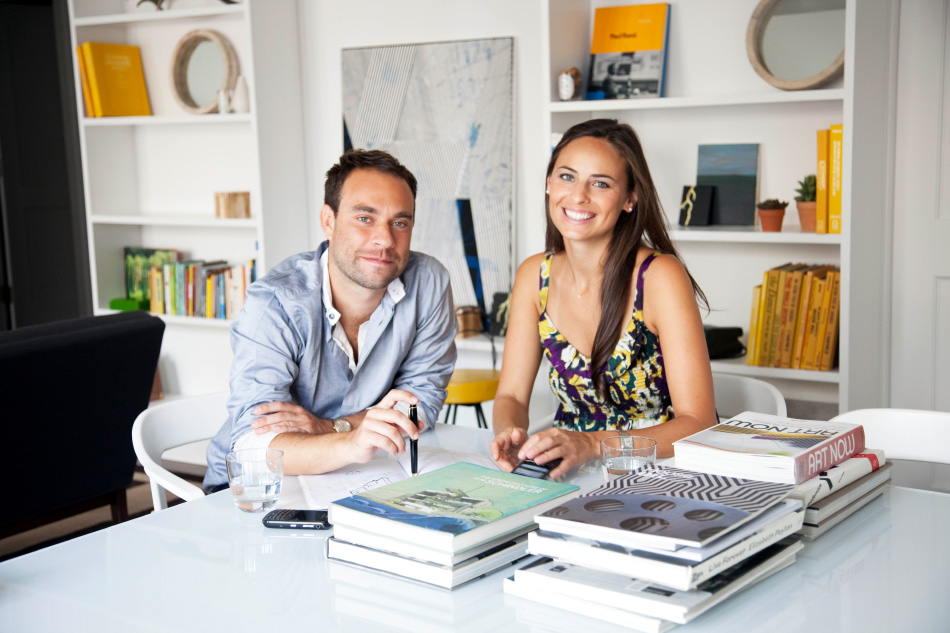 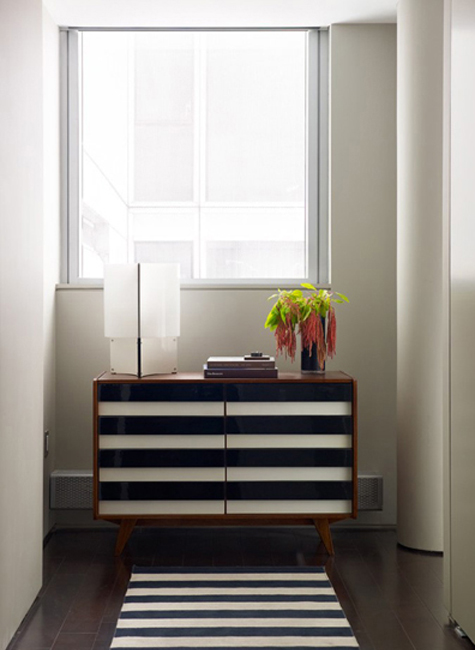 In a West Village apartment, a mid-century Czech dresser from Prague Kolektiv communes with a striped runner by Madeline Weinrib. Photo by Lucas Allen

Ashe: Cappuccino in the morning, Brunello Di Montalcino in the evening

Leandro: Black Label on the rocks

Leandro: A small clock I stole from my dad, a tiny Ikea nightlight I stole from our office, a wax skull that was a gift and a stack of books waiting to be read — first in line: The Age of Innocence 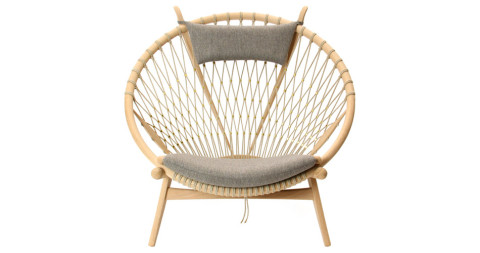 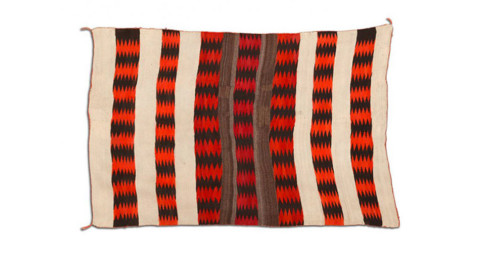 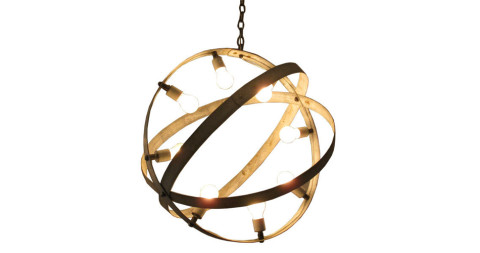 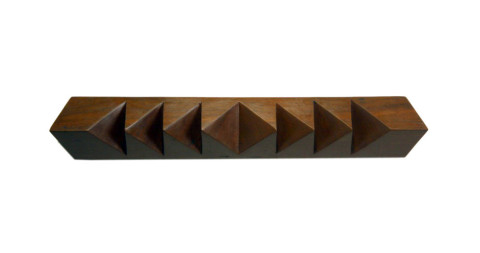 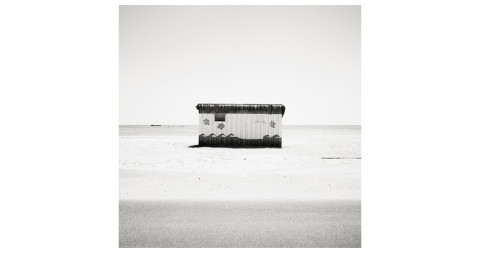 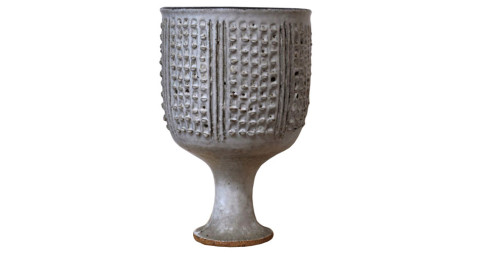