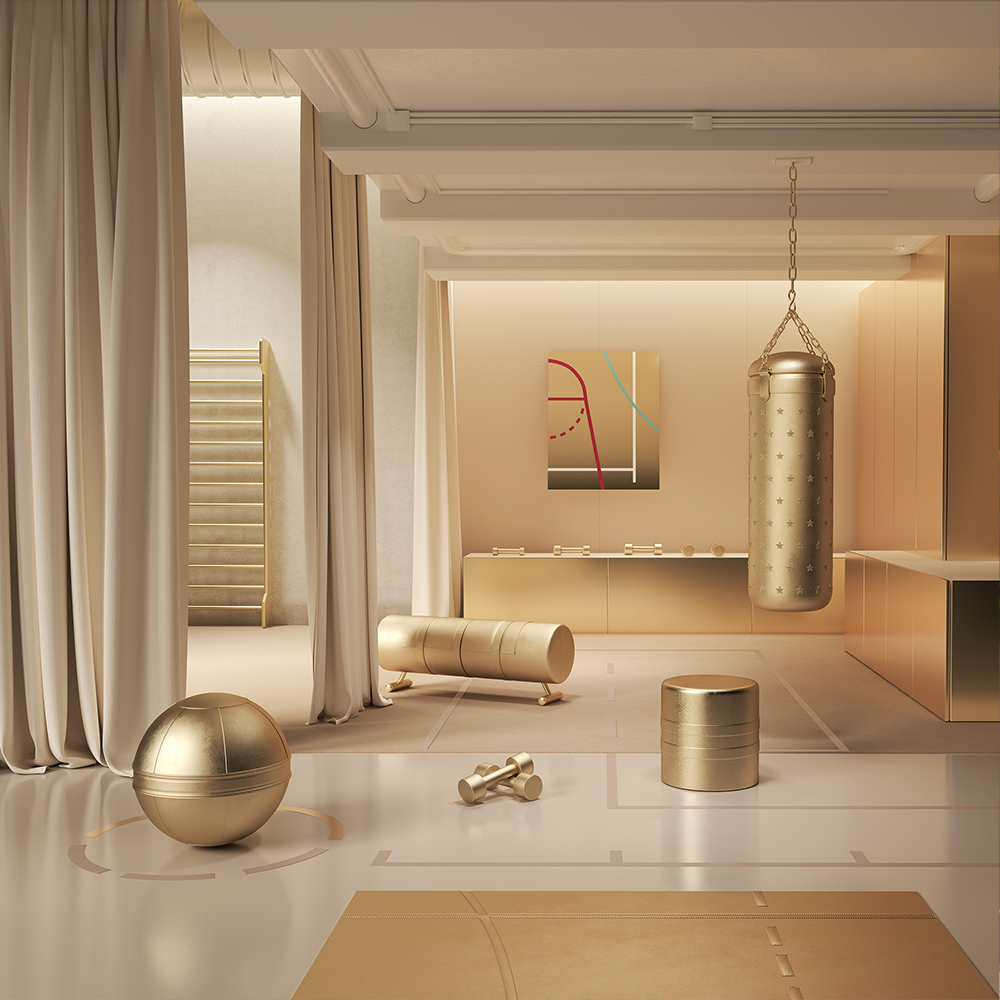 It involved a video, broadcast throughout their home city of Milan, that mimicked an Italian game show. Didero delivered a design statement about the collection while emojis of winged gold ingots, dollar signs and a woman throwing money at the viewer flashed on-screen. Flickering in an upper corner were the words “Call Now” and the studio’s phone number, prompting viewers to vie for a limousine tour of Milan or a trip to the Cayman Islands.

Meanwhile, visitors to their atelier — a compound off Piazza Arcole that was once the studio of architect Mario Bellini — were encouraged to bid on faux gold ingots. These kept changing in value, toying with bidders’ emotions as their investments rose and fell. The couple was, of course, trying to provoke by commenting on the omnipresent, godlike status money has acquired in contemporary society.

Reminiscing about this event recently, Biagetti jumps up excitedly from the low wall where we are sitting under an enormous tree in the sunny courtyard. “The phones were ringing like crazy,” he recalls, holding his thumb and pinky to one ear as if cradling a receiver. “Some were furious. ‘Why are you disrespecting God? You can’t speak about God that way!’ Other people, who thought it was real, were calling and saying, ‘I want to be rich! How do I do that?’ It was ‘I love you, I hate you, I love you, I hate you.’ ” Biagetti and Baldassari finally had to grant their staff permission to stop answering the phones.

“People who love us are like cult fans,” Biagetti says. “People who hate us just hate us. There is nothing in the middle.”

This makes the couple, unconventional in every regard, extremely pleased. Rather than designing and releasing collections every year, as is the Milano norm, they introduce new creations irregularly: sometimes two years apart, sometimes six months. They add to collections arbitrarily and in an unscheduled manner, as the evolution of a project reveals the next step.

The No Sex project (2018), for instance, eventually begat a line of clinically inspired products that addressed our obsession with sex and our tendency to view the lack of libido as a medical condition. These included a daybed resembling an examination table, a cheval mirror inscribed with the words “No Sex” spelled out in letters that become progressively smaller, a floor lamp eerily recalling an examination light and so on.

The couple have worked with avant-garde companies like Gufram (disco-inspired seating) and Post Design (furniture playing with the airbrushed-like neon colors of Memphis furniture). But they have also collaborated with such venerable firms as Louis Vuitton (a glass-topped table with a wavy base inspired by the ocean) and Venini (quirky vases and lighting).

The products themselves, however, are not what motivate Biagetti and Baldessari. They are secondary to a more abstract concept that might interest them — sex, false gods, rampant and unanalyzed consumerism, our narcissistic obsession with the body and fitness, the visceral feelings of home.

“The most important thing in our work is to cross over disciplines,” explains Biagetti, who founded the atelier in 2003. “Design is not just an object or an interior, it’s an entire experience. We want to merge disciplines in one full work.”

Biagetti has an architectural background, while Baldassari trained as an opera singer before moving into painting and design. These differing backgrounds predispose them to approach their work from multiple perspectives. To understand their process, it’s instructive to follow their latest project, Grand Hotel, from inception to production.

Grand Hotel is the result of the introspection they engaged in during the isolation imposed by Italy’s COVID lockdowns, much of which they spent in a tiny Sicilian village with their eight-year-old daughter, Altea. “It is more related to our idea of family and how design can change your family experience,” says the 49-year-old Biagetti, contrasting it with earlier projects, which were more about their exterior obsessions. “This is more intimate.”

“It’s a metaphor, a projection of ourselves into our dreams,” Baldassari adds. “For us, the story around an object is more important than the object itself. Story can push our imagination and create a short circuit between our environment and our body.”

Grand Hotel conveys the sense of family surrounding rituals that bring people together — partaking of meals, offering welcome and comfort — through the metaphor of idealized hotel hospitality. The hotel in question exists only virtually, a place inspired equally by the Grand Hotel Rimini (where Federico Fellini often stayed and which made appearances in several of his films) and Wes Anderson’s The Grand Budapest Hotel.

“Our idea is to build a story in pieces — real or not — like a Disney movie,” says Baldassari, 35, whose long black hair, Schiaparelli-pink lipstick and hoop earrings make her  look like a character one might encounter in such a movie. In fact, she and Biagetti, a man with mischievous eyes, a dark brow and a shaved head, do play roles in the Grand Hotel poster, which depicts them in bathrobes sipping coffee and wearing dazed expressions.

The image is taken from the scene in the Bond film Dr. No in which Sean Connery and Ursula Andress, abducted by the title villain, suddenly realize the coffee they are drinking is spiked with a sedative. It is one movie reference among many. The logo of the collection, a crest with two birds, comes from the Disney classic Cinderella, and the harlequin tablecloth they developed for the line derives from Snow White and the Seven Dwarfs.

The first Grand Hotel product launched was a coffee, for which the pair partnered with a producer in Sicily. Within the context of the collection, says Biagetti, “food is as important as furnishings. Coffee is one of the most iconic foods for designers. To do a good coffee is as difficult as designing a good object.”

Other items that could at some point be incorporated into the collection will likewise emerge from the visceral Grand Hotel concept of gathering and comfort. “From coffee and panettone to cushions to slippers to bedding,” Biagetti says.

Simultaneously, Atelier Biagetti is introducing Body Building 2, an extension of their cheeky Body Building collection. That 2015 project riffed on our fixation on exercise by creating luxury furniture inspired by gym equipment: a bench resembling a pommel horse, lighting in the form of gymnastics hoops, a coffee table with a base made of dumbbells.

The second installment is only virtual at this point. It features many of the same products as its forebear, adding a punching bag, Swedish ladder wall bars and other items. These are all swathed in a gold synthetic leather fabricated from recycled plastic bottles, making these the couple’s first eco-sustainable designs.

They are presented in the context of a virtual gym created in partnership with Barcelona-based multidisciplinary firm Six N. Five, which specializes in computer-generated imagery. Each product becomes “real” only when it is ordered and produced.

“It’s not about materialism,” concludes Biagetti. “Experience is the most important thing now.” For Atelier Biagetti, it comes down in the end to making consumers contemplate before they consume, prompting people to ask themselves what they think buying something will fulfill in their life and in their soul. 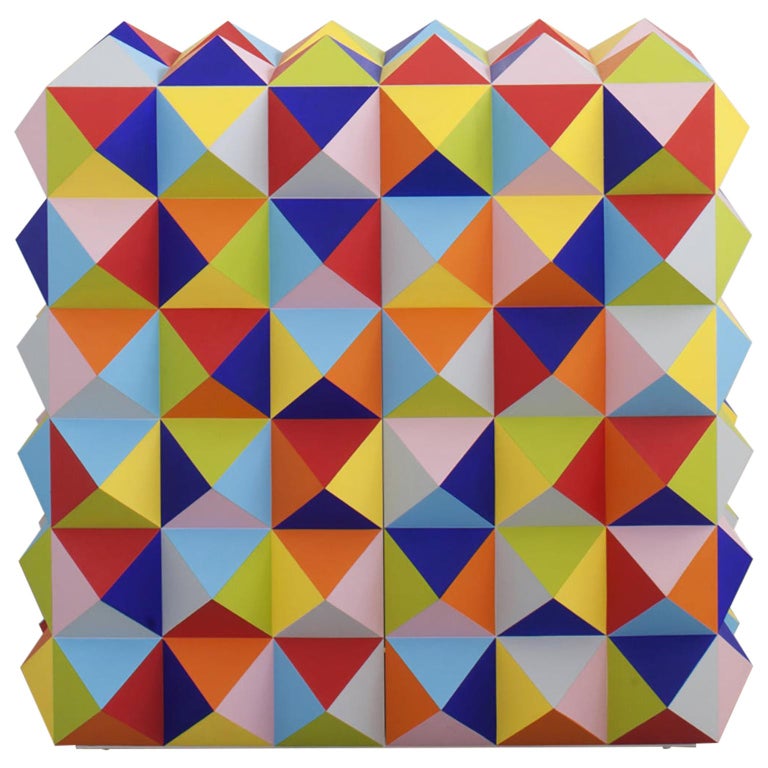 “Inspired by Palazzo dei Diamanti, in Ferrara, this hand-painted cabinet has an electronic locking system with a wooden key designed to safeguard your deepest secrets: an object-sculpture, an object-building, an object-jewel with extruded geometric shapes and strong colors.” 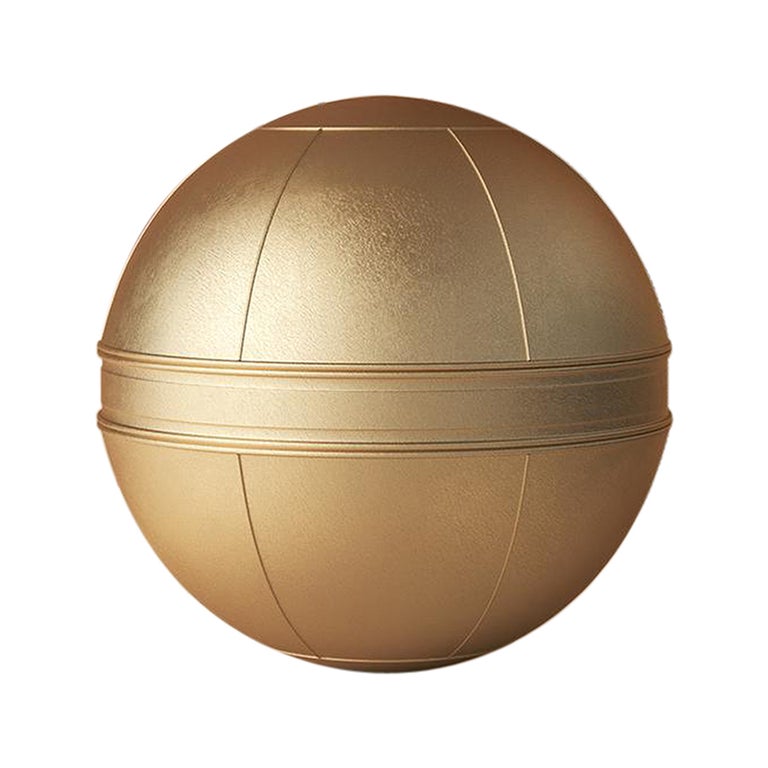 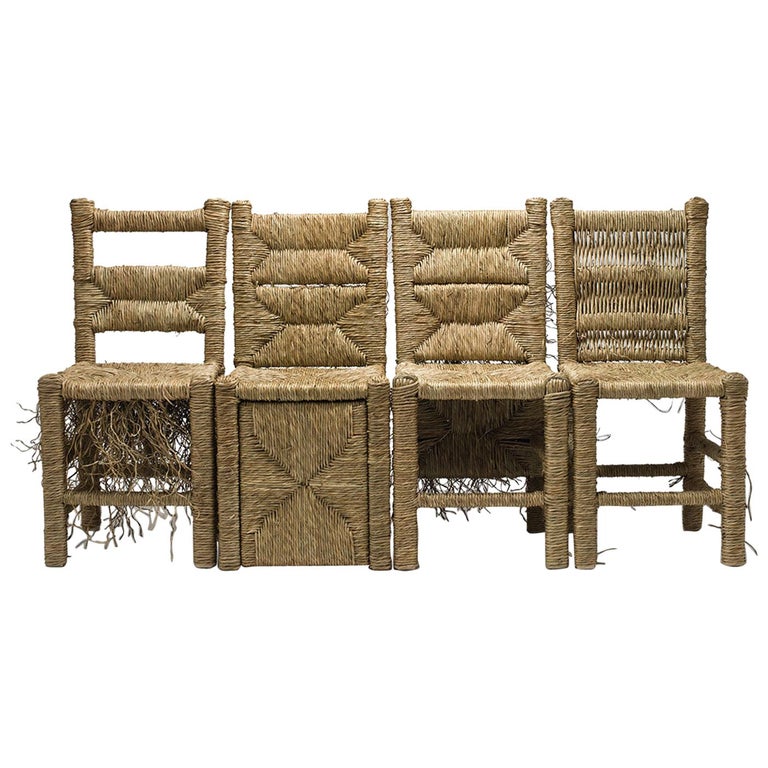 “The idea was to design the chair of our memories, something familiar and recognizable but with a twist. Objects become devices that suggest new ways of interacting with both physical and psychological spaces, triggering short circuits and undermining the dynamics associated with the collective memory.” 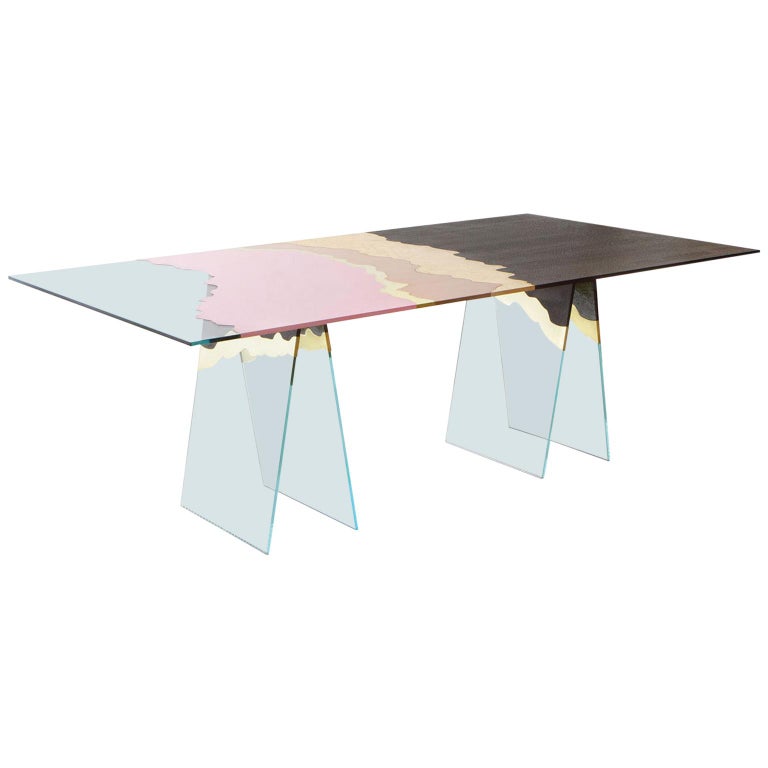 “In this dining table, materials are ingeniously mixed to conceal and reveal the object itself and the mysteries it may hide.”

“This red-printed wall mirror takes the optician’s sight test and gives it a new level of meaning with hidden words and unexpected colors. The sensuous and luxurious makeover with clinical connotations creates a new item with different functions.” 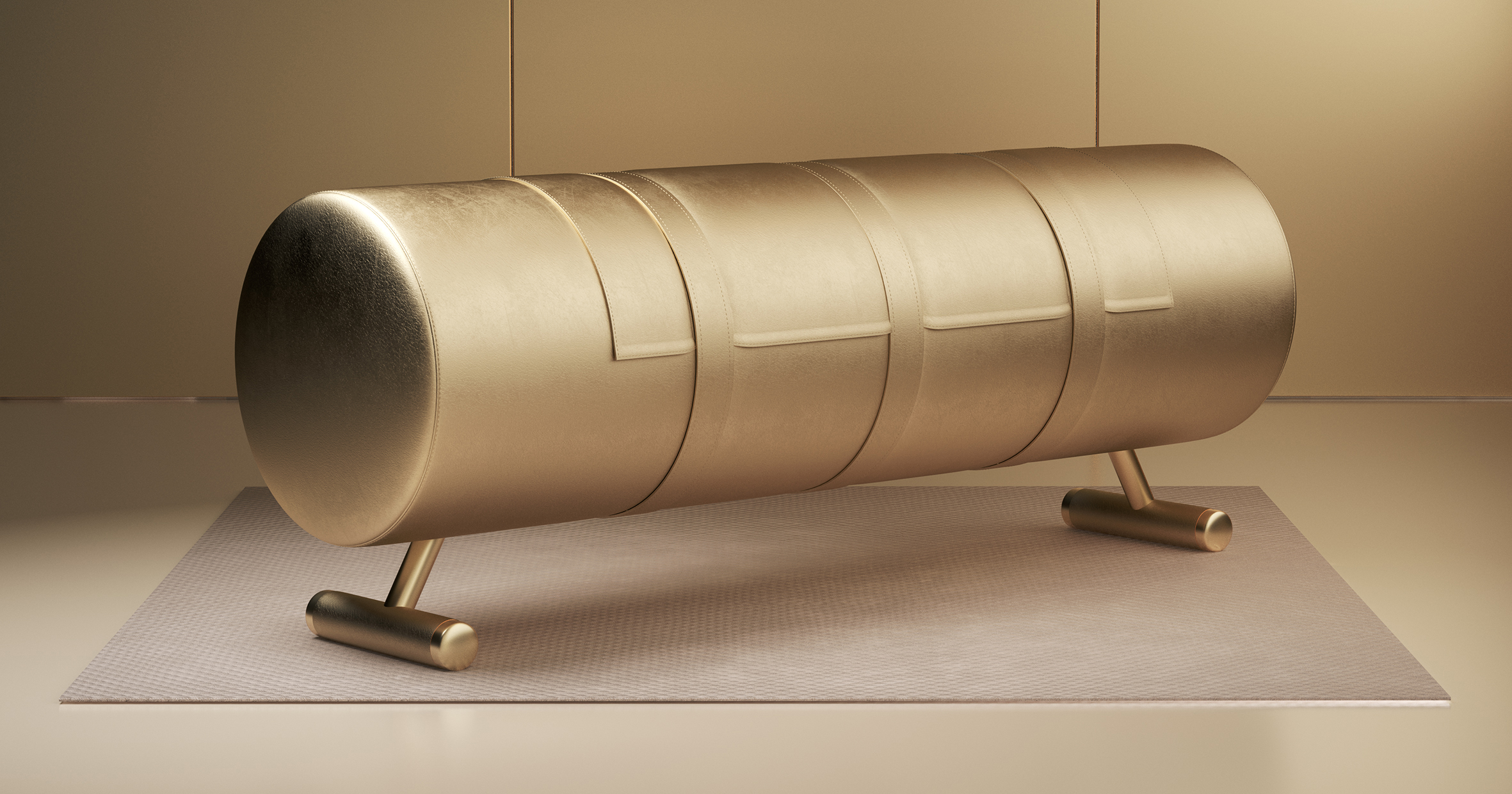