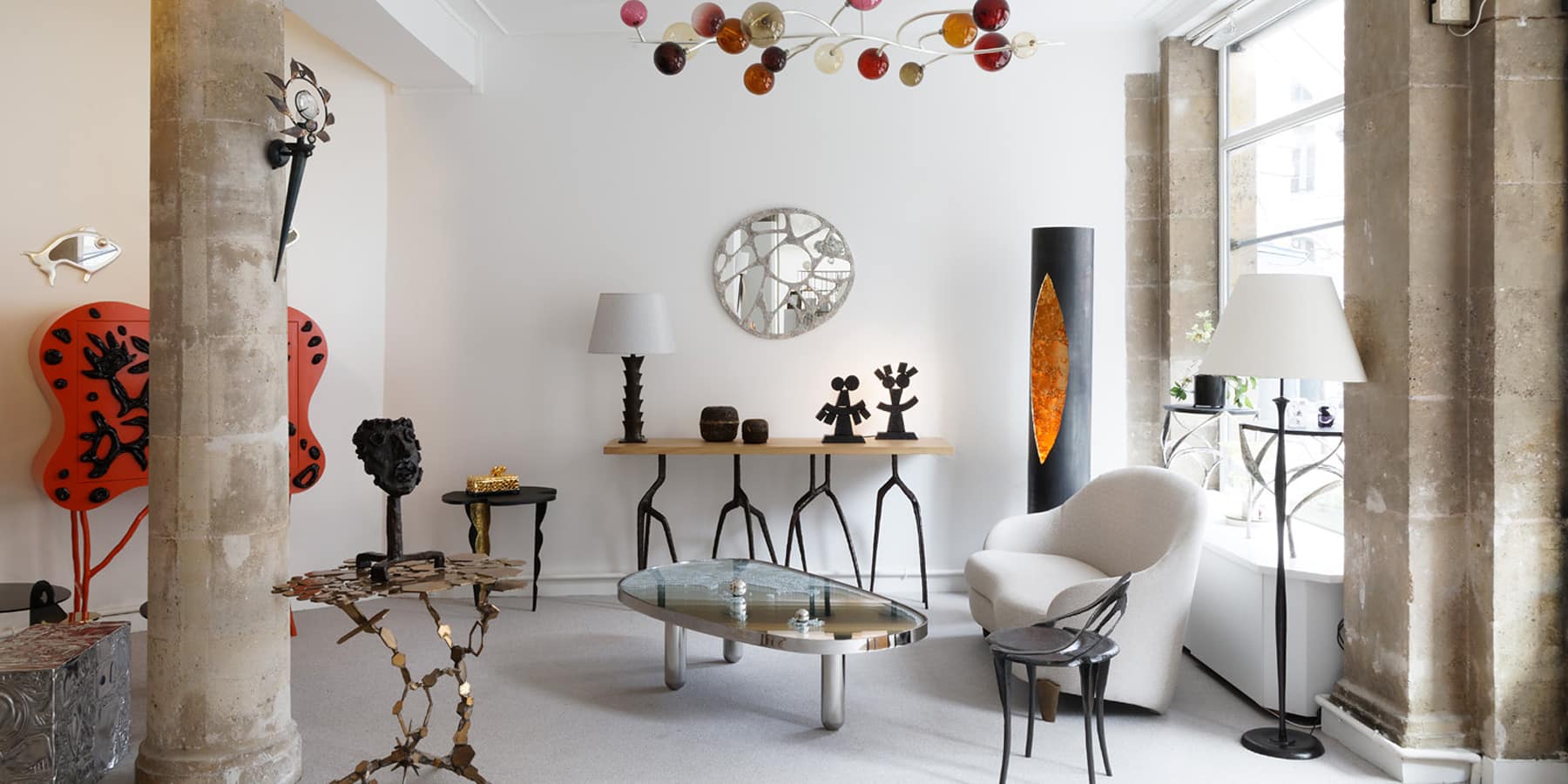 True to Its Name, Avant-Scène Is at the Forefront of French Design 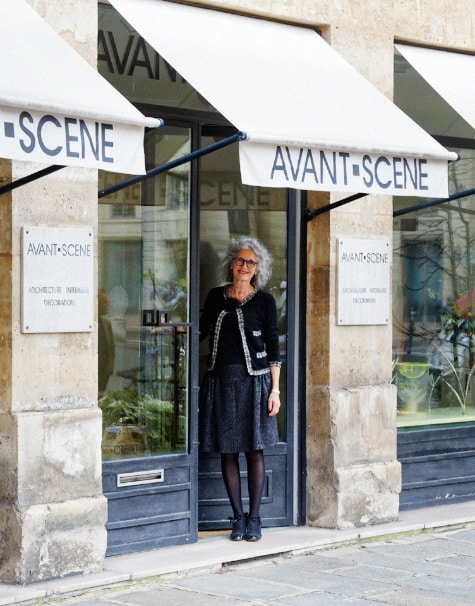 Élisabeth Delacarte stands outside Avant-Scène, the Paris gallery she opened in 1986. Since then, she has helped launch the careers of designers like Élizabeth Garouste and Franck Evennou, and in the process she has attracted an impressive clientele. Top: The showroom features pieces like an Evennou console table and a Mark Brazier-Jones side table.

Above the door of the Avant-Scène design gallery, in Paris’s sixth arrondissement, is a pane of glass with several cracks from the impact of a rubber bullet fired during the French general strikes in late 1995. “The whole district was completely electric,” recalls the gallery’s owner, Élisabeth Delacarte. “People wanted to occupy the Théâtre de l’Odéon, just like in May 1968.” Despite the damage to the window, she has never replaced it, preferring to keep it as a record of the event.

Located on the ground floor of an elegant 18th-century building on the semicircular Place de l’Odéon, Avant-Scène has been a mainstay of the Parisian decorative arts scene since its opening, in 1986. One of its early fans was Karl Lagerfeld. Another was Artur Miranda, of the Porto, Portugal–based interiors design firm Oitoemponto. “I’d drool every time I walked by in the eighties,” he recounts. “It was the place to go. It sold everything extraordinary.” Today, Delacarte’s clientele remains equally illustrious and includes such New York–based decorators as Brian J. McCarthy and Peter Marino.

Over the years, the roster of artist-designers she represents has evolved, currently embracing talents like Andrea Salvetti, Coralie Beauchamp and François Dimech. But she has struck up particularly long-lasting relationships with three of them. In 1991, she took under her wing Franck Evennou, who avows a particular predilection for working with bronze and a penchant for leaf- and branch-like forms. Six years later, she hosted the first solo show of Hubert Le Gall, whose pieces are often characterized by a comical dose of whimsy: Among his most iconic creations are a slipper chair shaped like a whale and a chest of drawers decorated with dozens of resin flowers. Probably Delacarte’s most famous protégé, however, is Élizabeth Garouste, whose work she discovered in 1981, just after the designer began partnering with Mattia Bonetti. The pair went their separate ways in 2002, and since then, Garouste has largely drawn inspiration from the natural world for her quirky pieces, whether it be bronze lamp bases fashioned like meteorites or the Cidaris console, whose legs resemble the roots of a tree. “Élisabeth [Delacarte] was one of the pioneers who showed designers working in an artisanal way and creating limited editions,” says Garouste. “She has remained true to her fantastical, feminine and playful taste and always aims for perfection.”

While trends have come and gone, the aesthetic Delacarte champions has stayed remarkably consistent. She loves traditional materials, especially bronze, iron and ceramics, and a handmade approach. “I find perfection wearisome,” she sniffs. “I want to be able to feel the hand of the artist.” Humor and poetry are also important ingredients. Perfect examples are Le Gall’s 1998 Marguerites 18 fleurs cocktail table, consisting of 18 bronze and resin daisies, and Evennou’s Mangrove console, whose legs look as if they could belong to some kind of insect. 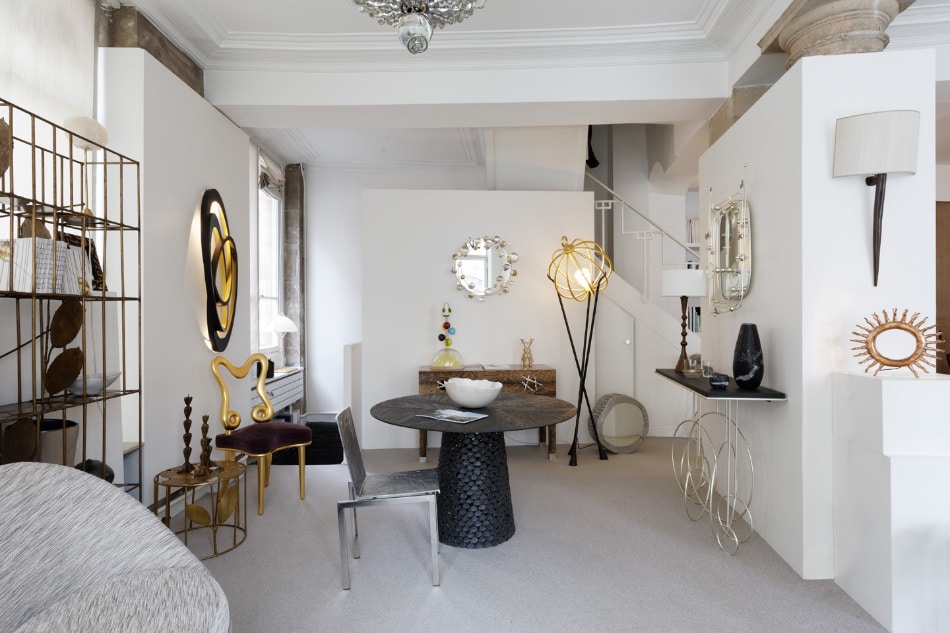 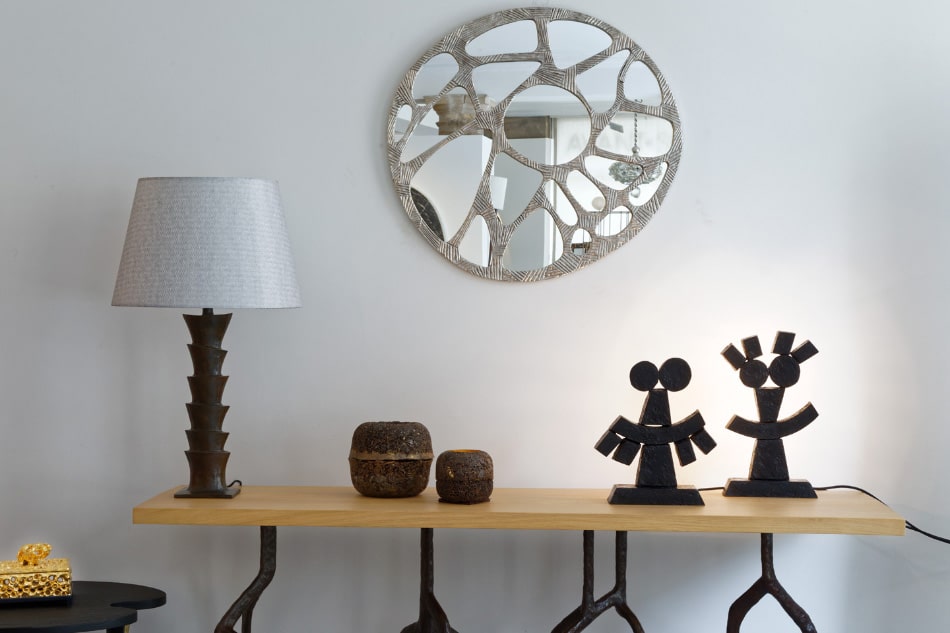 A pair of bronze lamps by Hubert Le Gall are displayed atop Franck Evennou’s Mangrove console table. The mirror is also by Evennou. 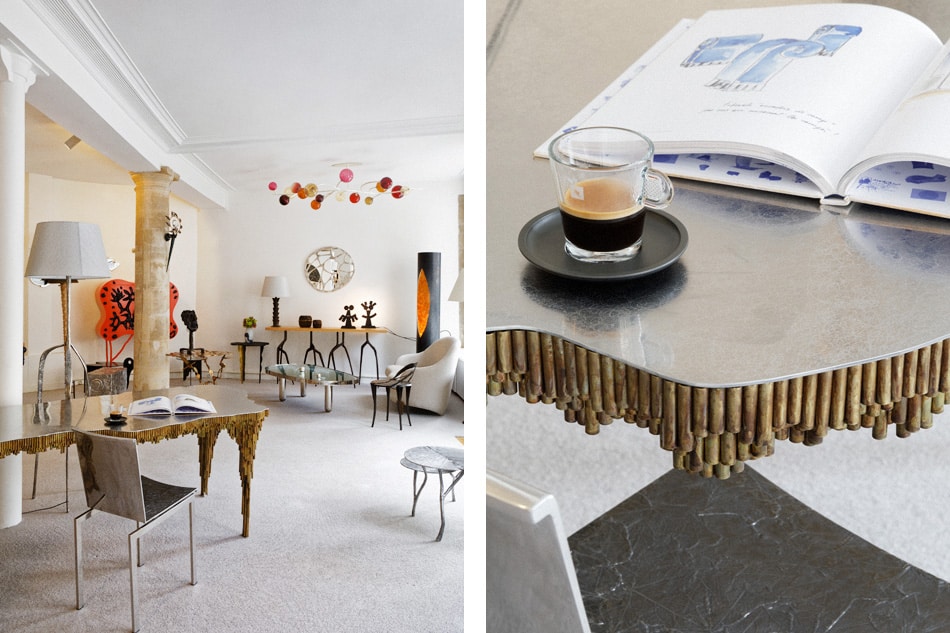 Left: An Andrea Salvetti table with a brass base and mirrored top is paired with a chair by the designer. Right: A detail of the Salvetti desk 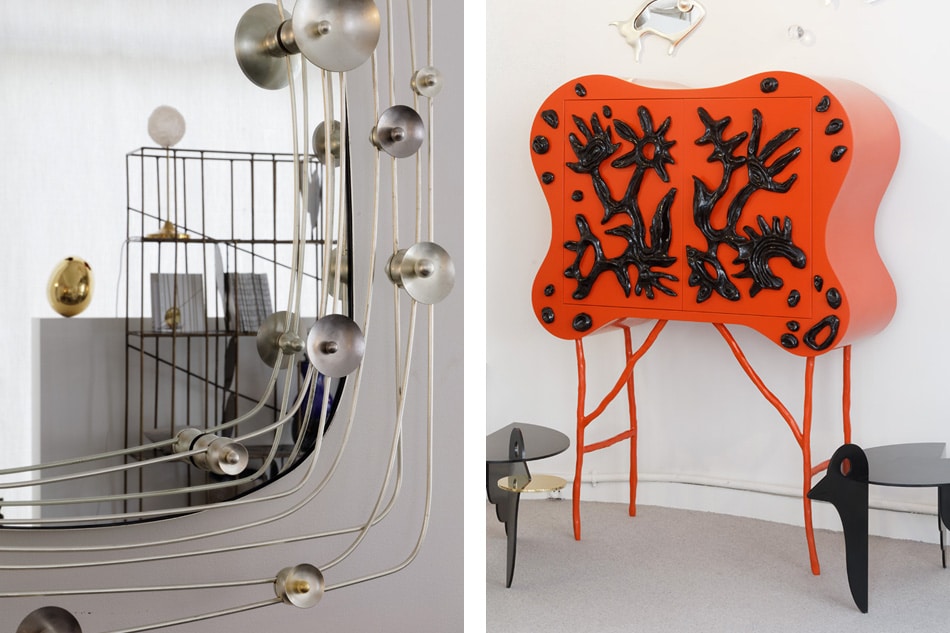 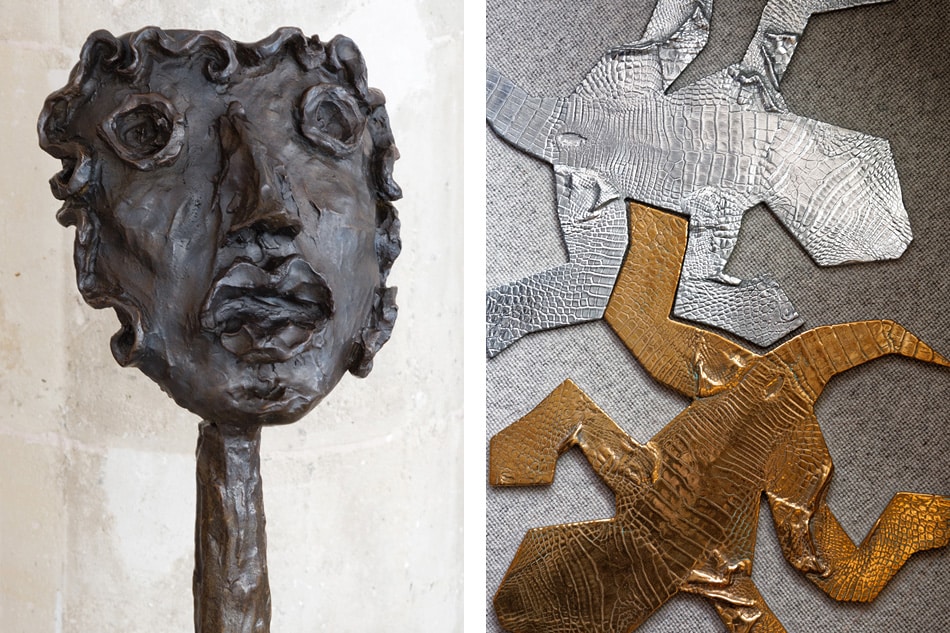 Left: This bronze mask lamp is by Garouste and Mattia Bonetti. Right: Salvetti’s Gecchi objets in bronze and aluminum.

True to Its Name, Avant-Scène Is at the Forefront of French Design
1/5
View Slideshow 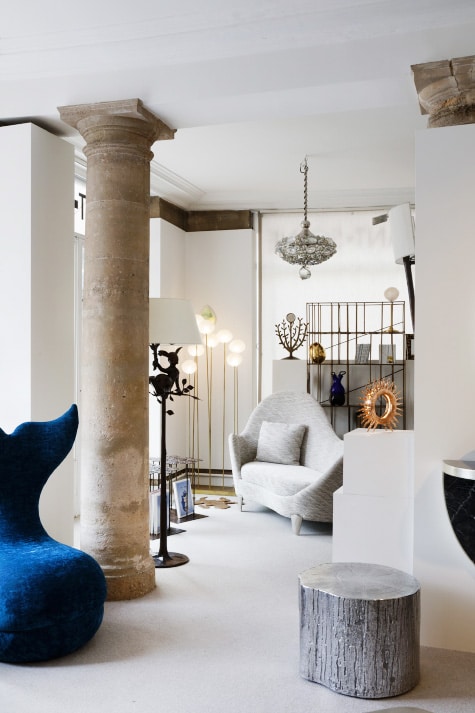 Delacarte hosted Hubert Le Gall’s first solo exhibition, in 1997. Here, his Whale chair and Odilon floor lamp are on display in her showroom.

Nothing particularly predestined Delacarte for a career in design. She was born in Paris into a family of scientists. Her father was secretary general of the French industrial behemoth Air Liquide and worked on the Ariane space program, coming into contact on several occasions with Soviet cosmonaut Yuri Gagarin. Delacarte herself studied history and economics at the Sorbonne and began her career simultaneously carrying out market research and working in the boutique of a fashion designer named Jacqueline Peres, whose niece was a college friend.

But Delacarte always harbored a love of the decorative arts — she still recalls her teenage purchase of an Art Deco mirror and chest of drawers from a gallery on the swish Rue du Faubourg Saint-Honoré — and she decided to turn it into a profession after visiting the Salon des Arts Décoratifs in 1985. “It was there that I discovered the extravagant creations of a number of young talents who didn’t have a gallery,” relates Delacarte. “They were in complete contrast to the pure, harsh design of the times, when everything seemed to be machine-made and black.”

She immediately quit her job with Peres to open her own gallery. The space’s location, directly opposite the Théâtre de l’Odéon, in part suggested the name she chose, Avant-Scène, which is the French expression for “downstage,” the area closest to the audience. Delacarte also liked its evocation of set design and scenography. “At the time, Néotù was the biggest contemporary design gallery in town, and objects there were placed as if in a warehouse,” she explains, “whereas I wanted to create something more akin to a cabinet of curiosities.”

“I find perfection wearisome. I want to be able to feel the hand of the artist.” 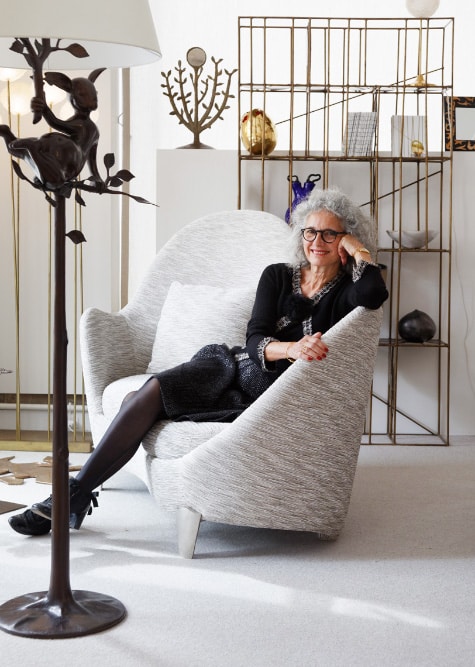 Delacarte relaxes on a Meridienne Koala chaise longue by Garouste and Mattia Bonetti.

Initially, her selection of objects was eclectic, encompassing reeditions of designs by early 20th-century masters like Pierre Chareau and Jean-Michel Frank, as well as the exuberant creations of the Memphis Group. Very swiftly, however, she started to concentrate on handcrafted limited-edition furniture. Some designers she’d discovered at the Salon des arts décoratifs, such as Sylvie Lapidouse and Marco de Gueltzl, may not be household names. But Tom Dixon, who back then was making fantastical pieces out of salvaged materials, is a different story. A particular best seller was his 1986 Kitchen chair, which incorporated a frying pan, fish skillets and female figures. “Whenever I bump into Tom, I always say to him, ‘Won’t you make something similar to your early creations for me?’ and he inevitably brushes me off,” she says with a laugh.

In 1989, Delacarte diversified her activities by moving into interior design. Her first commission was an apartment in the Parisian suburb of Neuilly-sur-Seine for members of the Trigano family, the founders of the Club Med resort group. Other high-profile clients were art collectors Daniel and Florence Guerlain, for whom she decorated an apartment on the Right Bank. In 2014, Delacarte sold off the contents of her own former flat at the Artcurial auction house after deciding to move to a larger space. Many of the top prices were achieved by Le Gall’s creations, such as his Versailles cabinet-bar, which sold for $137,000. A pair of Garouste and Bonetti Koala armchairs from the mid-1990s went for $30,000 and an André Dubreuil rug for $33,000.

One regret Delacarte has is parting with two Aux lianes occasional tables by Evennou. “I really adore them,” she says. “If one day, I see them at auction again, I think I’ll buy one back.” Delacarte particularly loves the poetic nature of Evennou’s work, as well as his drafting skills. Ask her about Garouste’s output, meanwhile, and she’ll enthuse about its otherworldly qualities. “You feel like you’re in a dream rather than in reality,” she explains. “She very much has her own universe.” According to Le Gall, Delacarte herself is just as singular. “She’s quite unique and has a very personal vision,” he says. “You find things at Avant-Scène that you’d never see anywhere else.”

Élisabeth Delacarte shares her thoughts on a few choice pieces. 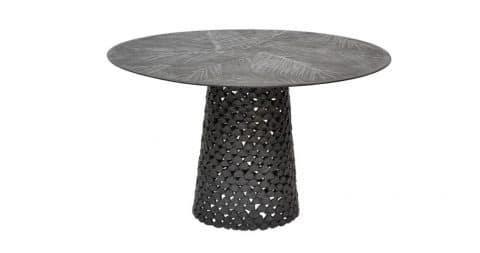 “A round table whose veined top represents palm leaves, it has a base that looks as if it were the end-grain wood from the trunk. It’s made from black-painted aluminum and can be kept outdoors. Its quality of execution is marvelous, and it’s very elegant in a garden.” 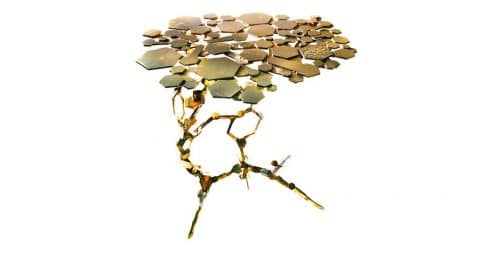 “Made completely from bronze, it has a top that seems to be miraculously suspended in midair. Even though it’s not very large, I find it very impressive.” 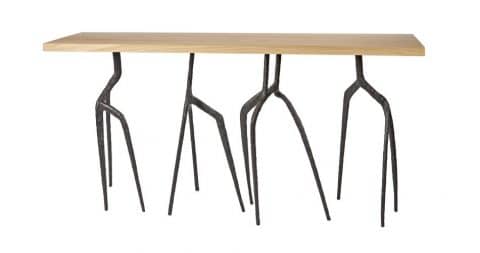 “Its four legs have taut, rigorous lines. It’s a piece that’s both powerful and amusing. You get the impression that it’s going to start to dance. An added advantage on a practical level is that it can be ordered with two, three or four legs.” 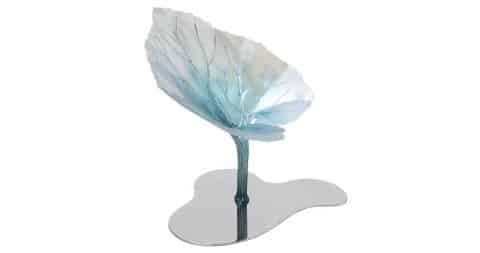 “Pure poetry! Drops of blue dew flow through the hollow of a leaf and form a beautiful reflective puddle on the floor. It’s a chair to meditate in and is the last of a series of twelve.” 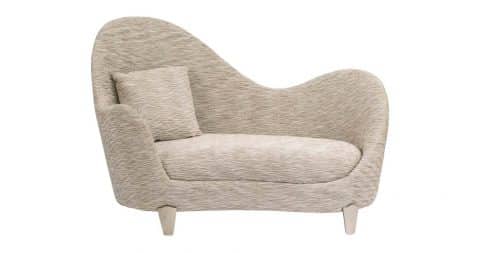 “We’ve been editing and selling this design since 1995. It’s elegant, with a form that appears simple yet is both charming and comfortable.” 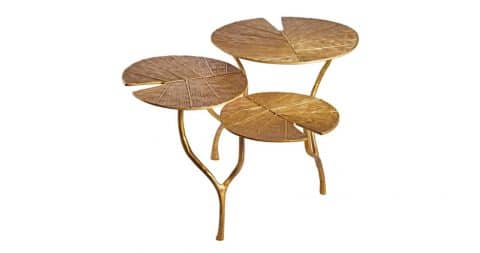 “I’ve always had a problem with cocktail tables, which often are static, visually bulky and heavy. This version by Franck is light and as if in movement. It’s more a sculpture than a table. The different heights of the tops reinforce this effect.” 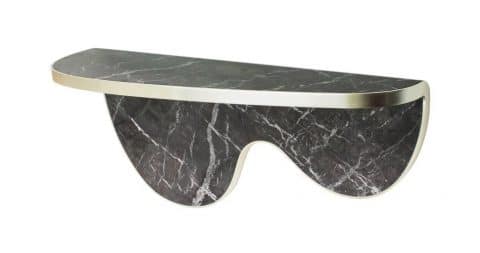 “I love the fact that the console is suspended and that the whole is both simple and powerful.” 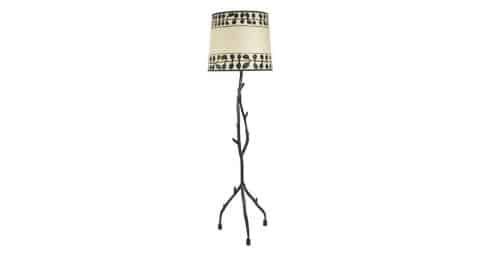 “Each one is unique. The wrought-iron base is always slightly different, and Élizabeth hand paints each shade according to her mood. There is no predetermined motif. I also love the beautiful beetles in gilt bronze and glass paste.”