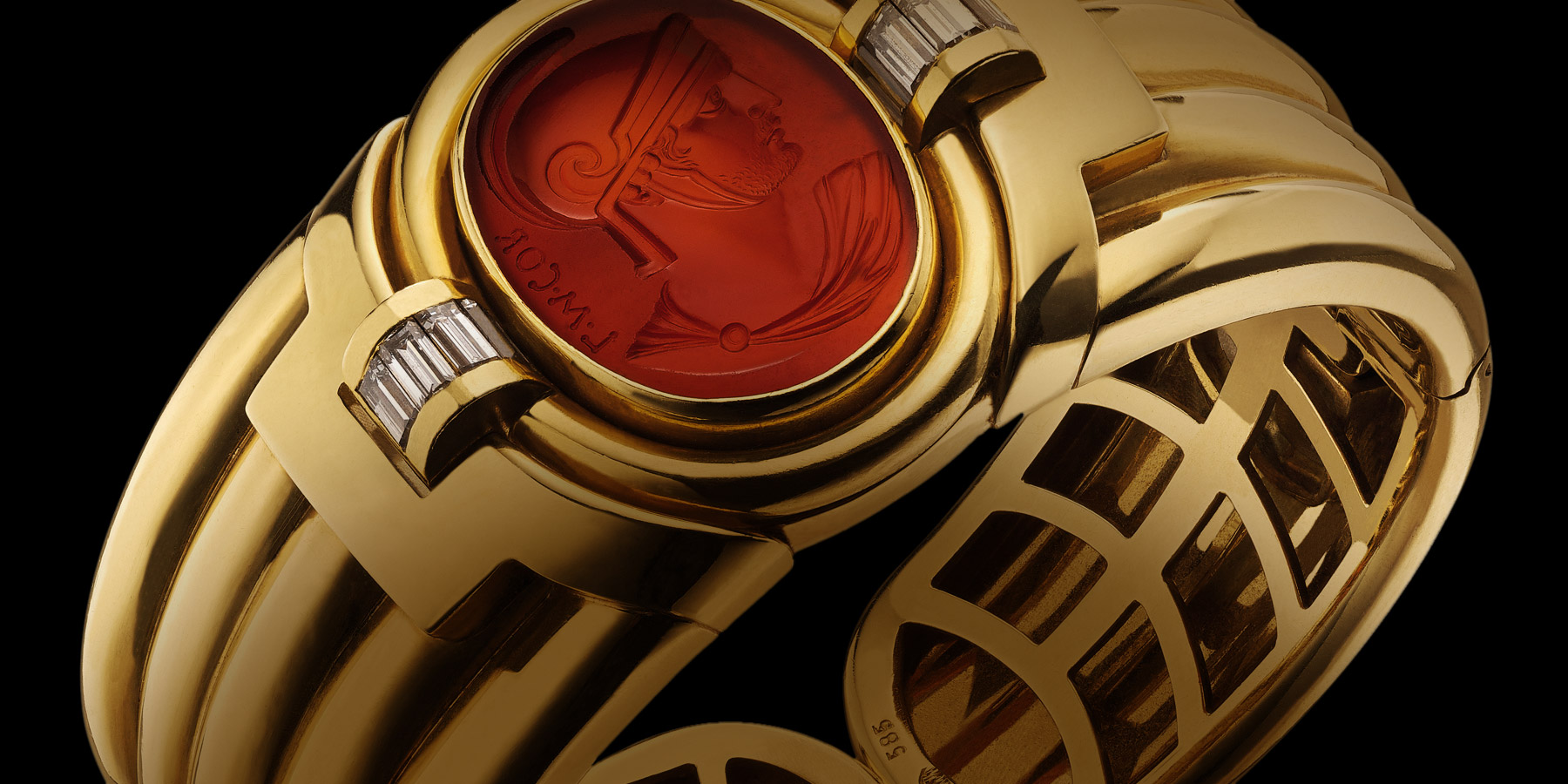 An exhibition at Bulgari's Fifth Avenue store celebrates the ways that Rome has inspired the fabled jeweler's glamorous creations. 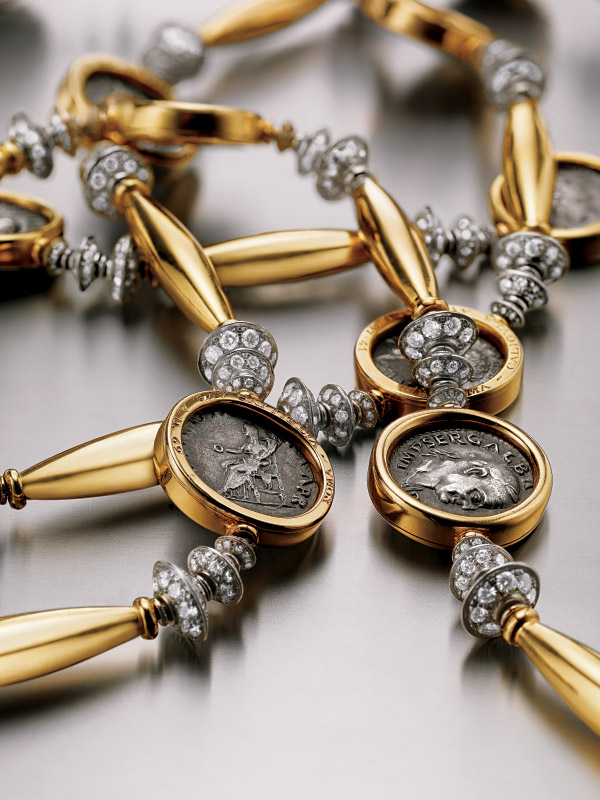 October 19, 2015Fascinated by archaeology and a collector of ancient coins, Nicola Bulgari, the grandson of the house’s founder, launched the Monete collection in 1966. Above: This 2003 Monete gold and diamond-studded necklace features 12 Roman denarii in silver representing the 12 Caesars. Top: A gold bangle features a carnelian intaglio flanked by diamonds, 1980. Photo by Antonio Barrella, Studio Orizzonte, Roma Courtesy of Roman Heritage Department

For many artists, taking inspiration from their surroundings is perhaps the oldest and simplest path to creation, whether it’s an oil-on-canvas landscape or a collage of found objects. This is no less true for Bulgari, the 131-year-old Italian jewelry house, which has long looked to Rome as a  source of reference for its fanciful and decidedly romantic designs. To celebrate its hometown muse, the brand has just debuted an exhibition at its New York flagship on Fifth Avenue. “Bulgari & Rome: Eternal Inspiration,” which runs through November 22, is the company’s homage to the Eternal City, showcasing 40 heritage pieces that directly reference Rome’s architecture, artwork, history and monuments.

The jeweler’s presence in Rome is the stuff of Tinseltown legend. Founded in 1884 by Sotirios Boulgaris, a Bulgarian-Greek émigré, Bulgari moved to its current Rome flagship, on Via dei Condotti, in 1905. It was here that Richard Burton bought gift after gift for Elizabeth Taylor, starting with a 7.40-carat emerald ring that the actor gave her while the two were shooting the 1963 film Cleopatra in the city. The exhibition includes a cigarette case (on loan from a private collector) covered in ancient Roman coins, which the couple presented to the film’s director, Joseph Mankiewicz, and his wife, Rosemary Matthews. “It was the height of their infamously public love affair,” says Daniel Paltridge, the North America president of Bulgari. “It reads, ‘To Our Favorite Producer and Wife / Lest we forget the glamour of it all / All Love / Elizabeth & Rich.’ ” 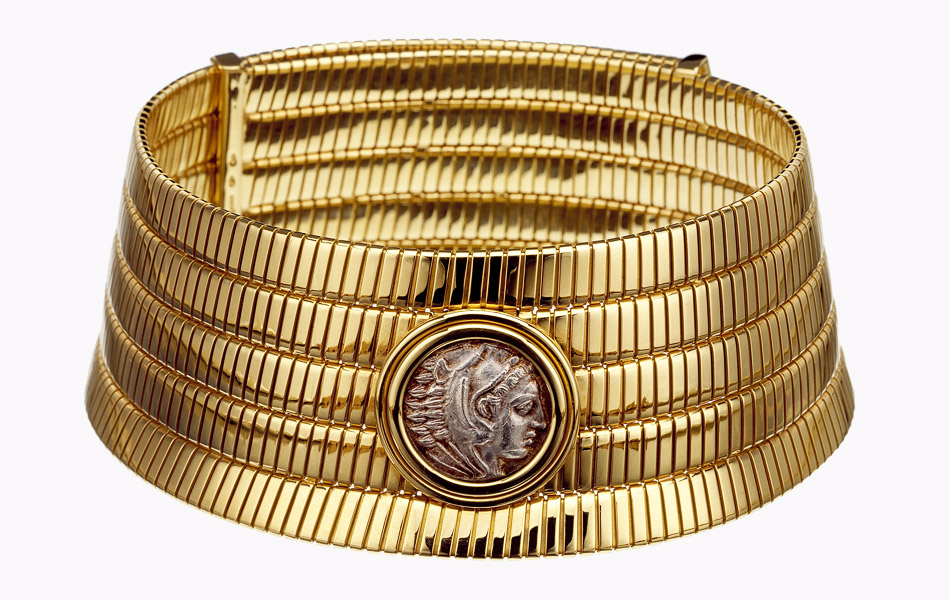 Stars of “Eternal Inspiration” include a Tubogas choker in gold with a Hellenistic silver coin, 1980. All photos in slide show by Antonio Barrella, Studio Orizzonte, Roma; courtesy of the Roman Heritage Department 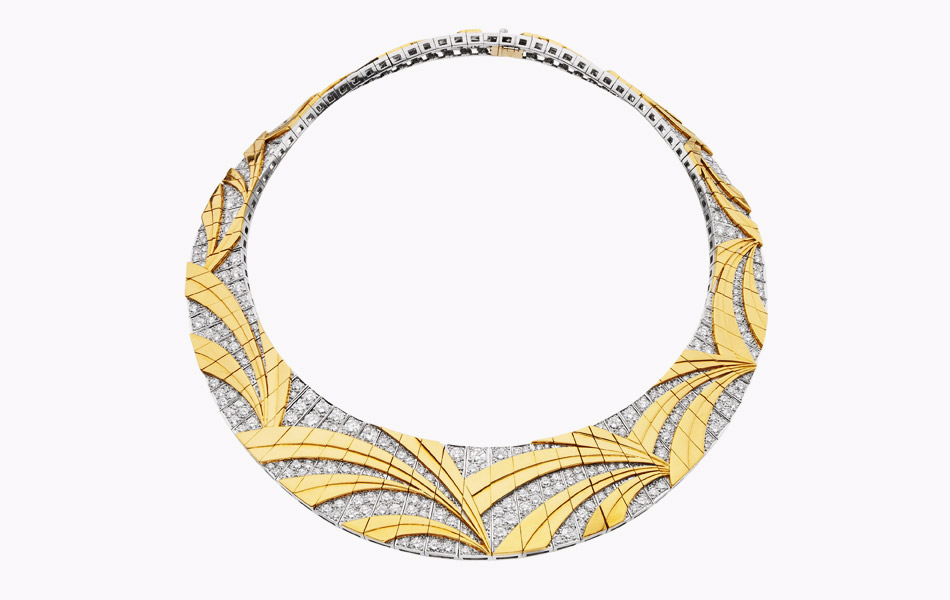 Necklace in gold and platinum with diamonds, 1980, inspired by a Roman aqueduct 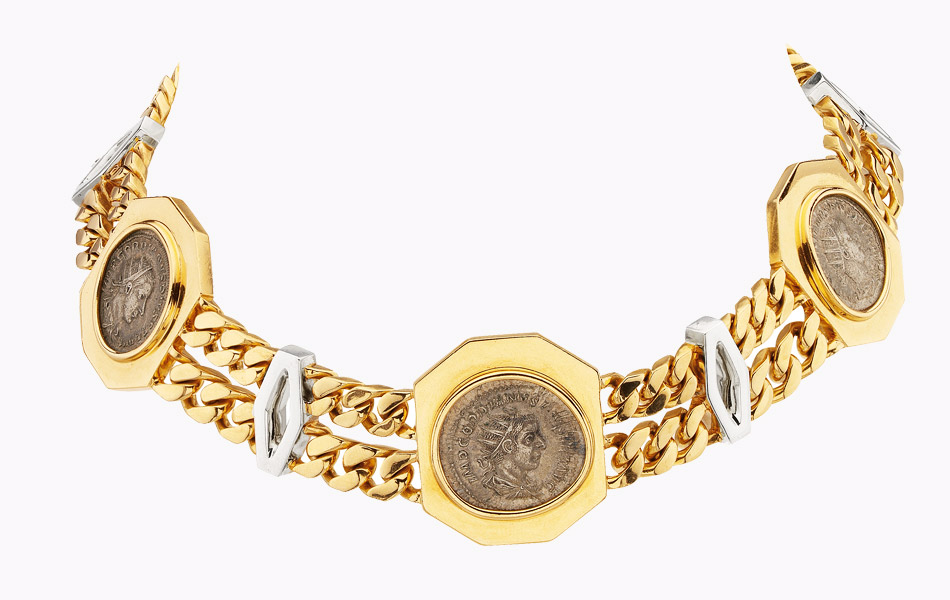 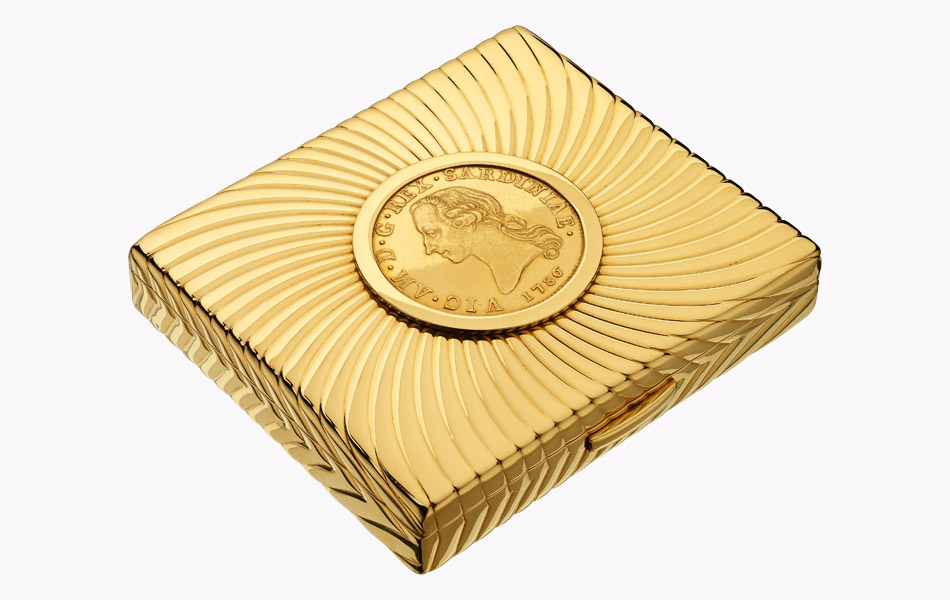 Cigarette case in gold with gold coins from the Kingdom of Sardinia, 1939 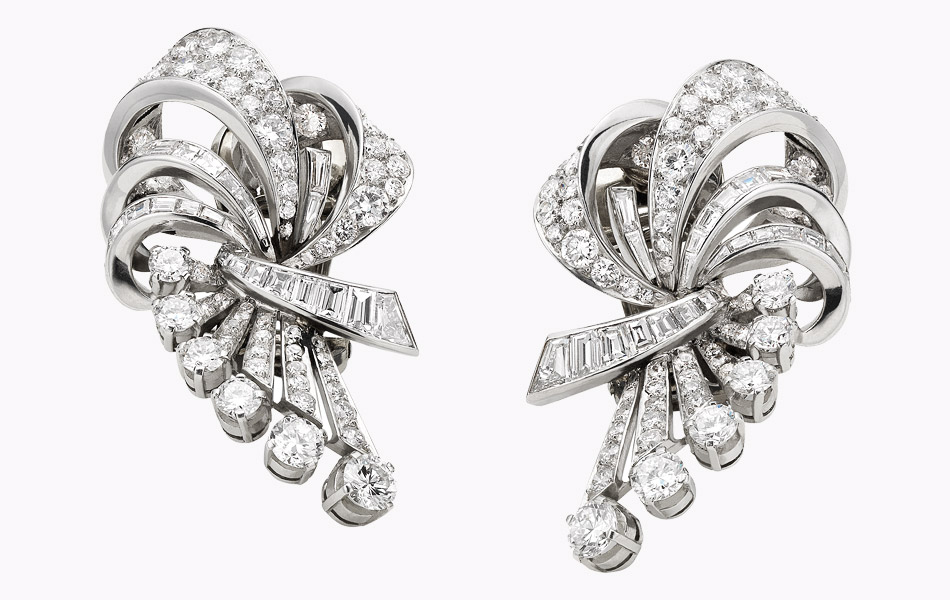 Bow earrings in platinum with diamonds, 1938, inspired by the Ponte Sant’Angelo, a bridge built by the Emperor Hadrian 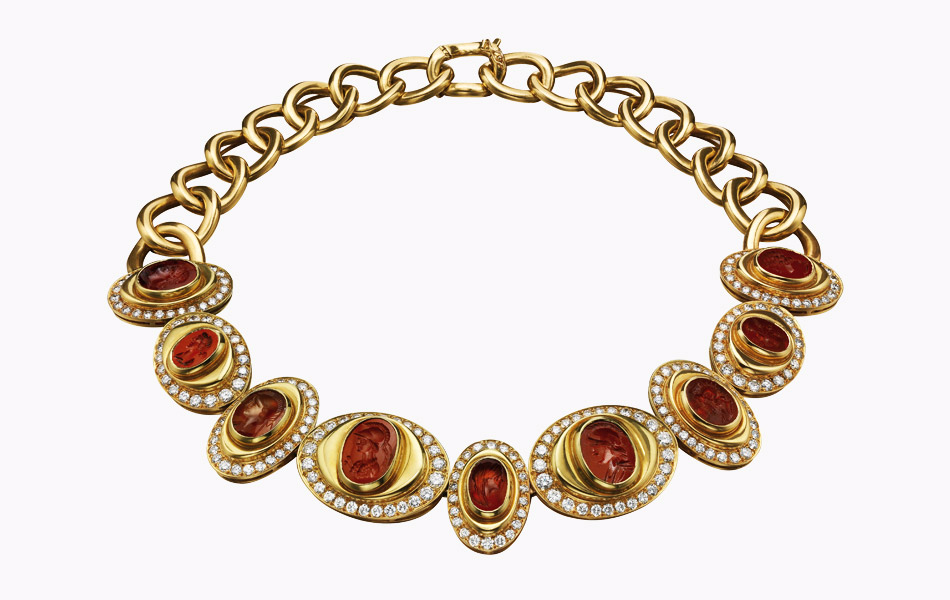 Necklace in gold with ancient Roman cornelian intaglios and diamonds, 1978 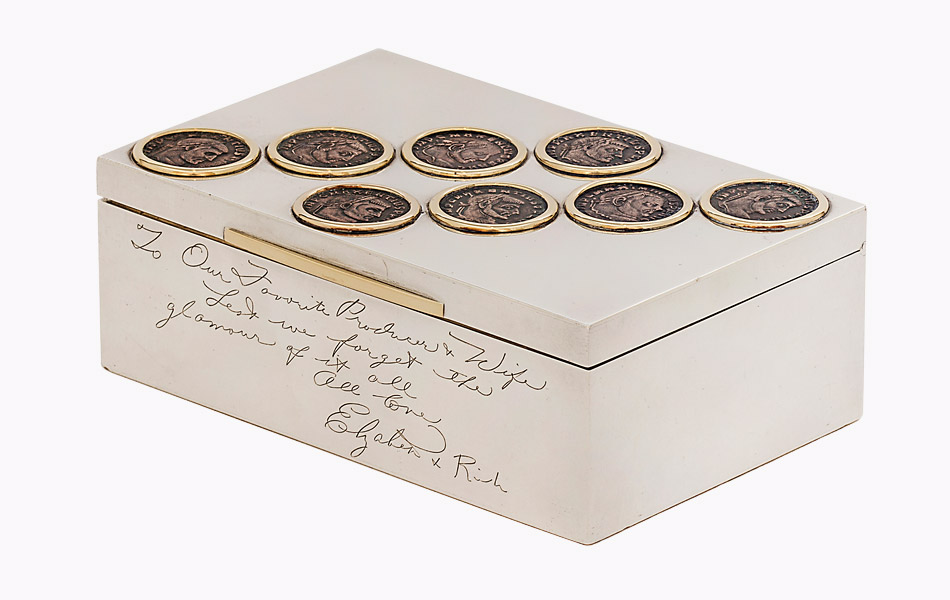 Cigarette case in silver with coins from the 2nd and 3rd centuries, 1962. The case was presented to Joseph Mankiewicz, the director of the 1963 film Cleopatra, by the film’s stars Elizabeth Taylor and Richard Burton, who embarked on a scandalous affair during its shooting. 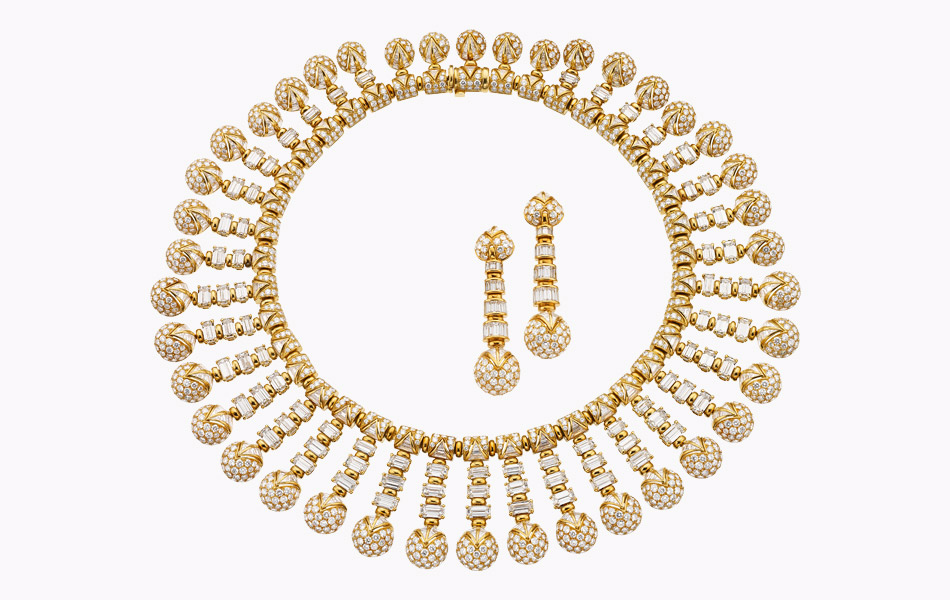 Necklace and pendent earrings in gold with diamonds, 1992, inspired by the patterning in the Pantheon 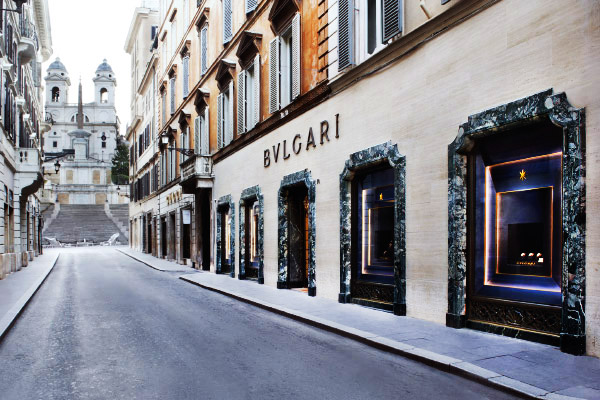 Bulgari moved its Rome flagship in 1905 to Via dei Condotti, just steps from Rome’s fabled Spanish Steps. Courtesy of Bulgari

Says the brand’s CEO, Jean-Christophe Babin: “Bulgari owes so much to the magical city of Rome, where the past and present coexist.” The exhibition highlights both. The earliest example is a pair of diamond and platinum bow-shaped earrings from 1938 — an atypical piece for a jeweler known for its use of colored stones. The winged motif was inspired by the stone angels that adorn the city’s Ponte Sant’Angelo (although reference is also made to the curved lines and bold punctuation of the era’s Retro movement in jewelry). More recent pieces are more obviously Bulgari: a gold sautoir from 1970 with mother-of-pearl and diamonds and an etched motif  mimicking that of the obelisk in the city’s Piazza del Popolo, a gold necklace and earrings suite from 1992 inspired by the Pantheon and a bold bib necklace from 2005 with different color sapphires and diamonds arranged in a pattern reminiscent of the basalt pavement of the Appian Way.

The 131-year-old Italian jewelry house has long looked to Rome as a  source of reference for its fanciful and decidedly romantic designs. 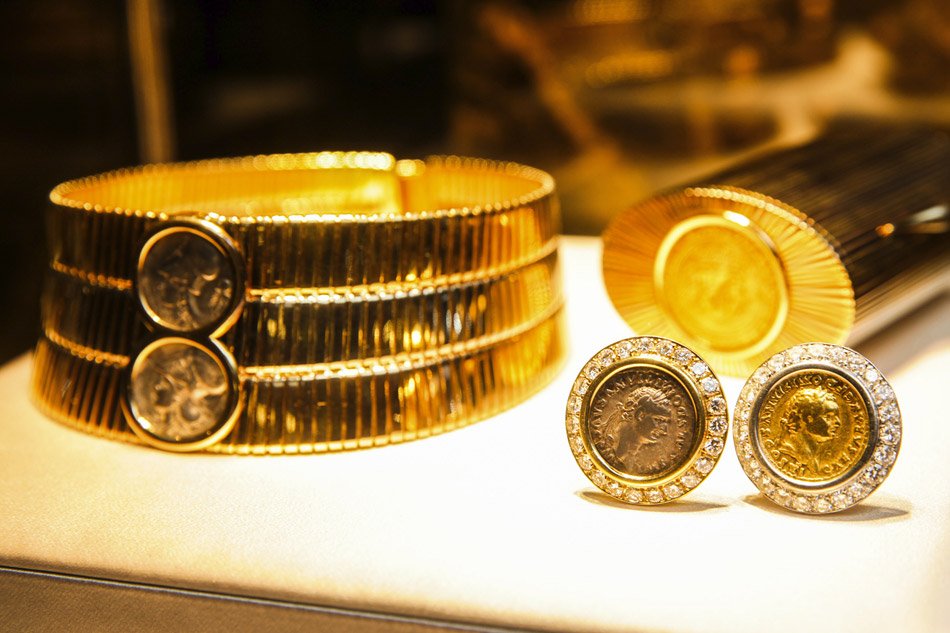 Among the pieces artfully displayed in New York are a two-tone gold Tubogas choker with ancient coins, 1980s, and earrings in gold with Roman Republican silver coins and diamonds, ca. 1985. All photos in slideshow by Angela Pham/BFA.com; courtesy of BVLGARI Roman Heritage Department 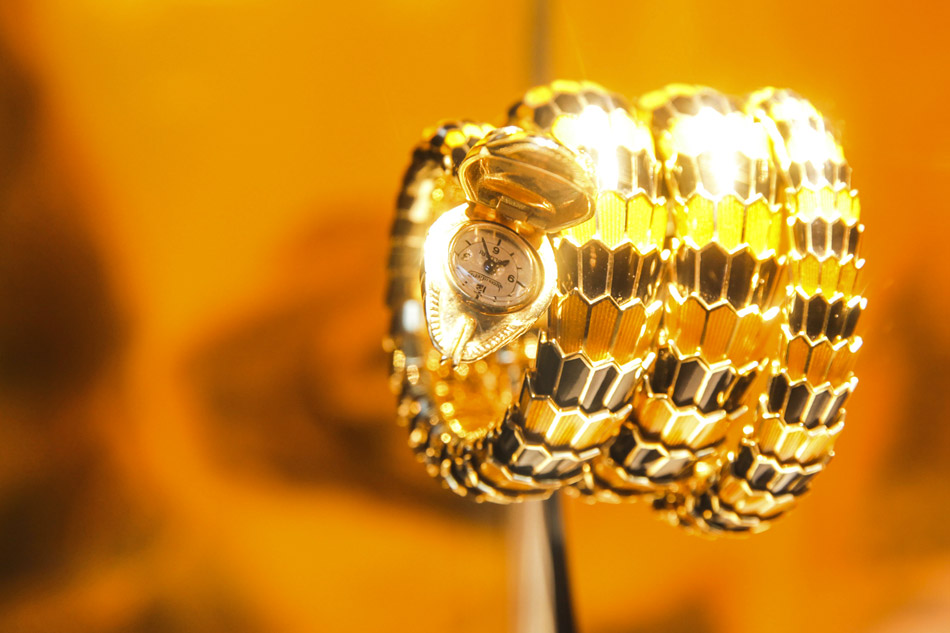 Snake bracelet-watch in gold with yellow and black enamel, ca. 1987 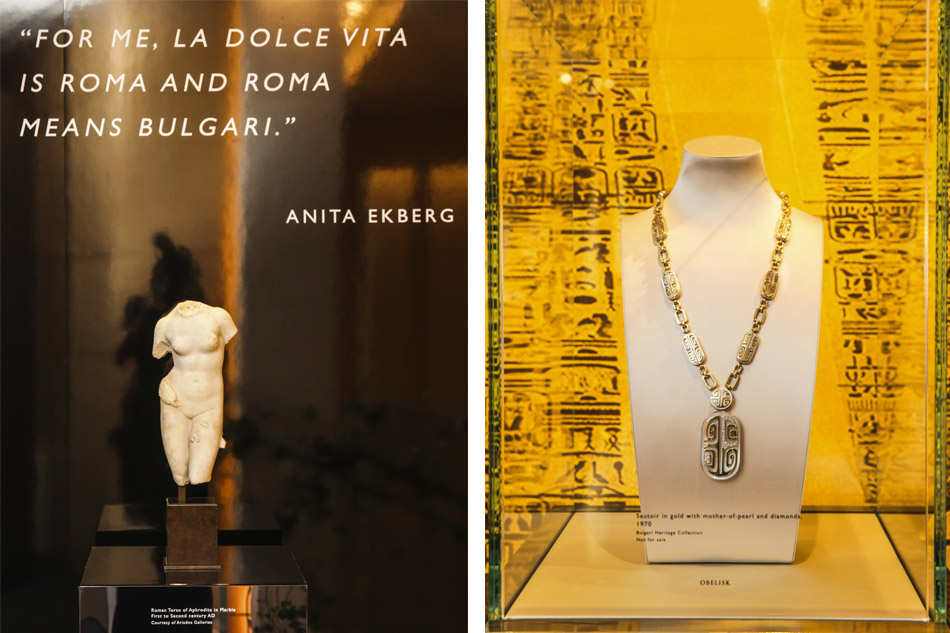 Left: This marble torso of Venus, 100–200 AD, is a Roman variant of the the celebrated 4th-century BC Aphrodite of Knidos by the Greek master sculptor Praxiteles, on loan from an Upper East Side antiquities gallery. Right: Sautoir in gold with mother-of-pearl and diamonds, ca. 1970 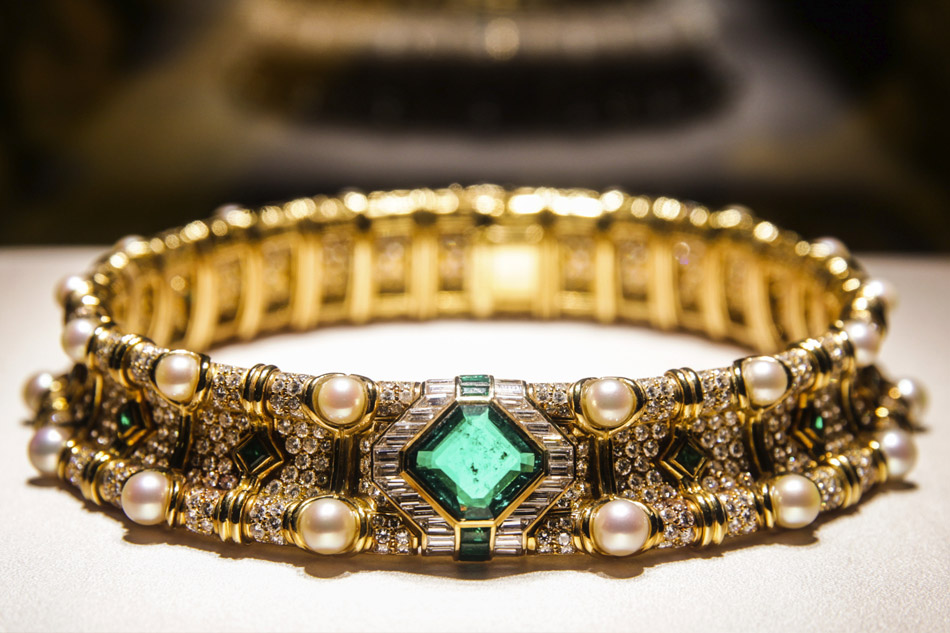 Choker in gold with pearls, emeralds and diamonds, 1980s 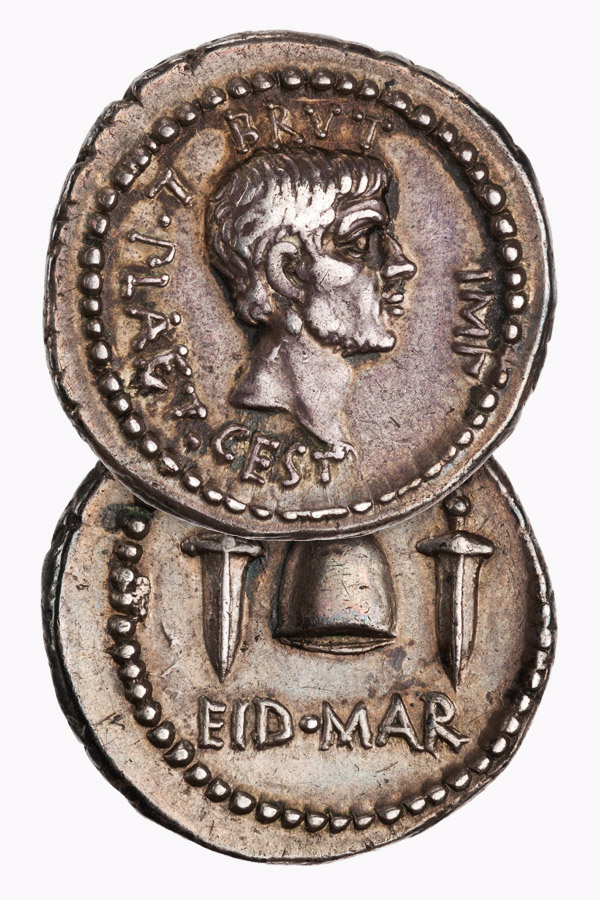 The American Numismatic Society has loaned ancient coins to the exhibition that sit on display alongside Bulgari jewelry from the Monete collection.

What is most striking about the different sources of inspiration is their variety: from the highbrow and the literally high up (the octagonal ceiling coffers of the Palazzo della Rovere for an emerald, ruby and diamond sautoir from 1969) to the seemingly mundane and literally low down (the geometrc motifs of the city’s sidewalks that inform the modular pieces in the brand’s recent Parentesi collection). “Rome’s legacy has been and always will be at the core of Bulgari’s creations and ethos,” says Paltridge, noting that the company last year partnered with the city to restore its famed Spanish Steps, a project scheduled for completion in 2017.

Bulgari has also drawn ideas — and materials — from ancient Roman and Greek coins, which the brand has incorporated into its Monete designs since the 1960s. “Nicola Bulgari was fascinated by archaeology and began collecting ancient coins as a young boy,” says Paltridge, referring to Bulgari’s former vice chairman, the founder’s grandson. “He remains an avid collector and introduced the first Monete pieces, set with ancient coins, as a tribute to his father, Giorgio, who had ignited his interest [in them].” The exhibition features a sizable collection of similar mintage provided by the American Numismatic Society, including a “hoard” of coins bearing the profiles of late Roman emperors Arcadius and Honorious. These are shown side by side with Bulgari pieces like the 1980 Tubogas gold choker with a Hellenistic silver coin at its center.

In addition, Bulgari borrowed an assortment of Roman statues and torsos from Upper East Side antiquities purveyor Ariadne Galleries to complete the inspirational environment of the exhibition — further evidence that the Eternal City has been immortalized through its art. 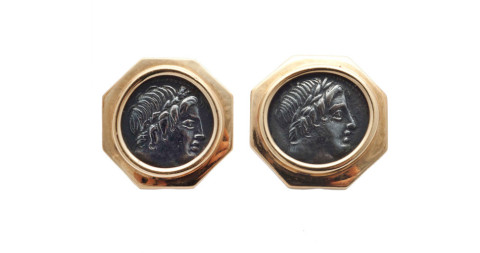 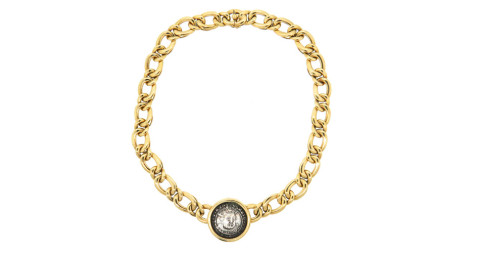 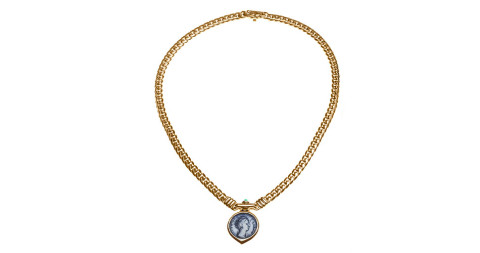 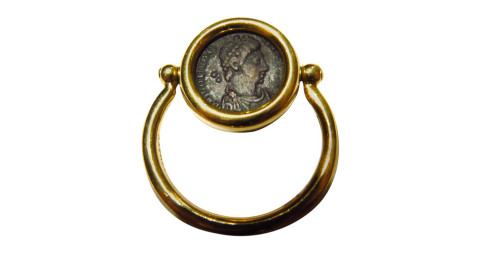 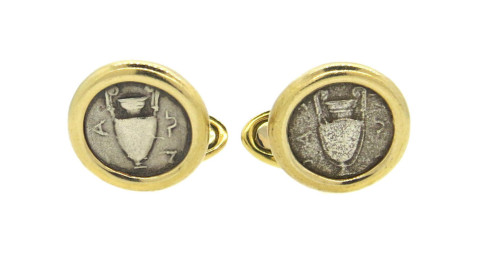 Shop All Bulgari Jewelry on 1stdibs