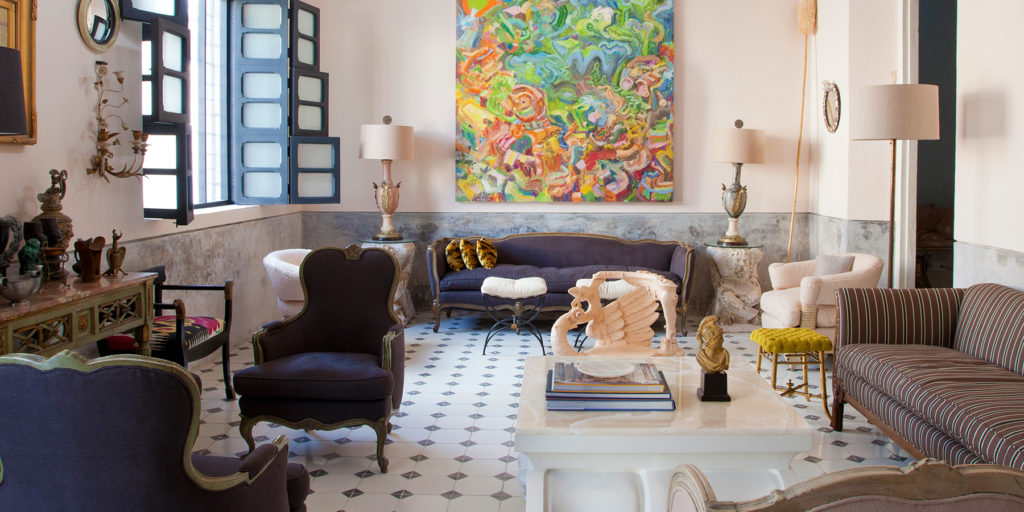 A cast of international newcomers is restoring and reinventing the centuries-old homes of Mérida and the Yucatán Peninsula. 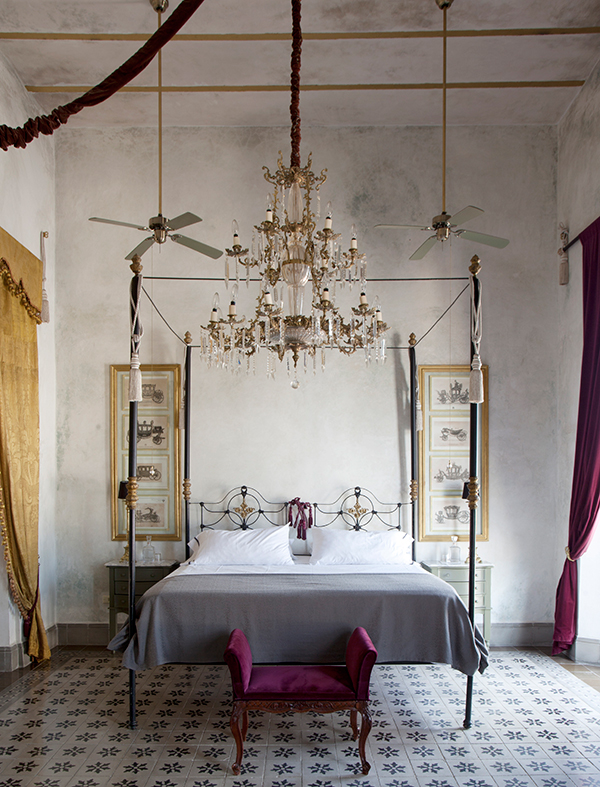 May 2, 2016The single-suite hotel Coqui Coqui Mérida, an inland outpost of the popular Tulum resort and one of 15 artfully restored properties showcased in the new book Casa Mexico, from Rizzoli. Top: The Mérida living room of Robert Willson and David Serrano, co-owners of the Los Angeles gallery Downtown. All photos © Tim Street-Porter, courtesy Rizzoli

Today, a new breed of Yucatecan is moving into many of the buildings,” Annie Kelly writes in the introduction to her handsome new tome from Rizzoli, Casa Mexico: At Home in Mérida and the Yucatán, referring to Mérida’s historic residences. Built on the ruins of a Mayan community established around 750 B.C., the city was conquered nearly 500 years ago to become the 16th-century Spanish capital of the Yucatán Peninsula, which juts out between the Gulf of Mexico and the Caribbean Sea. A 19th-century boom in sisal production helped the region’s denizens corner the world market, bringing unprecedented prosperity and an impressive inventory of grand houses and haciendas to the area.

“The predominantly 19th-century haciendas are rather like old dowagers that have had ‘a little work done,’ ” Kelly writes. Recently, these grande dames have drawn international tastemakers from Mexico City, New York, Los Angeles and London, who have renovated and restored the elegant edifices. Fifteen such properties are presented with masterfully composed photographs by Kelly’s husband, renowned lensman Tim Street-Porter. 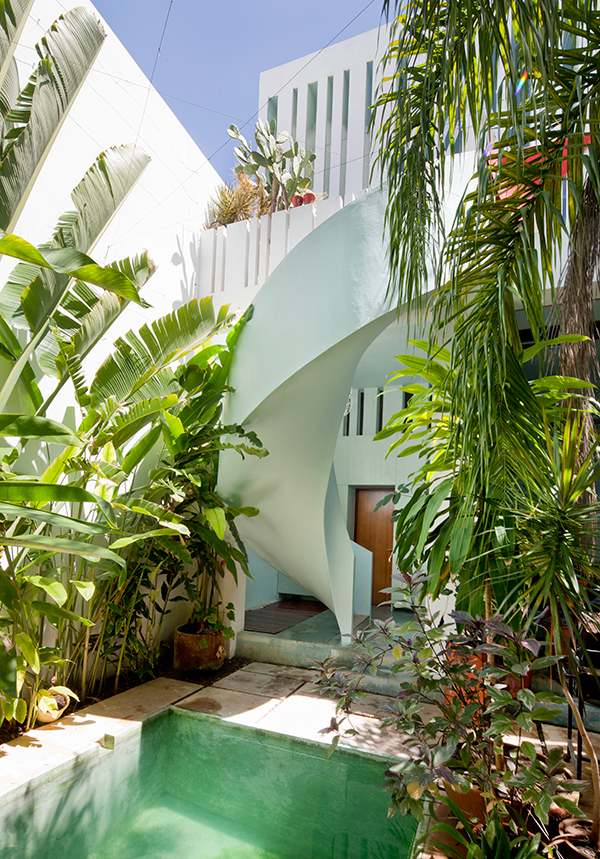 Kelly and Street-Porter have numerous publications to their credit and collaborated on the successful “Rooms to Inspire” book series. They’ve also produced prior volumes on Mexico, and their familiarity with the area shows. As a longtime resident, I’ve grown weary of the ubiquity of ponchos, sombreros and Frida Kahlo in Mexican cultural coverage. Kelly and Street-Porter’s view is infinitely more nuanced, stylish and in touch with the cosmopolitan pulse of the country today.

In the homes that Kelly and Street-Porter feature, design and decoration are influenced by an eclectic range of styles, from Mayan to Spanish Baroque and neoclassical, as well as Beaux Arts and Mexican modernism. If there is a definitive vernacular style, it consists of heroic proportions — soaring 20-foot-high ceilings and grandly scaled doors that open onto rooms arranged around leafy courtyards, the kinds of spaces where sultry tropical afternoons are whiled away in the cool confines of a loggia. In most cases, the homes’ architectural integrity was preserved and successfully infused with modern additions.

The sequence of chapters in Casa Mexico follows the arc of these houses’ influences, from the venerable 17th-century Spanish Colonial Hacienda Petac, with its Moorish arches, to Plantel Matilde, the modernist, temple-like hacienda-studio of Mexican artist and sculptor Javier Marín. Four chapters are devoted to Coqui Coqui Mérida founder Nicolas Malleville, his design partner, Francesca Bonato, and “their ever-expanding businesses,” as Kelly describes them, which include boutique hotels, perfumeries, spas and even an old-fashioned barbershop in the quaint colonial town of Valladolid. Entering Coqui Coqui “feels like stepping into a Belle Époque fantasy,” she writes, its interior fittingly furnished with “a profusion of crystal chandeliers, gilded mirrors and stained glass.” 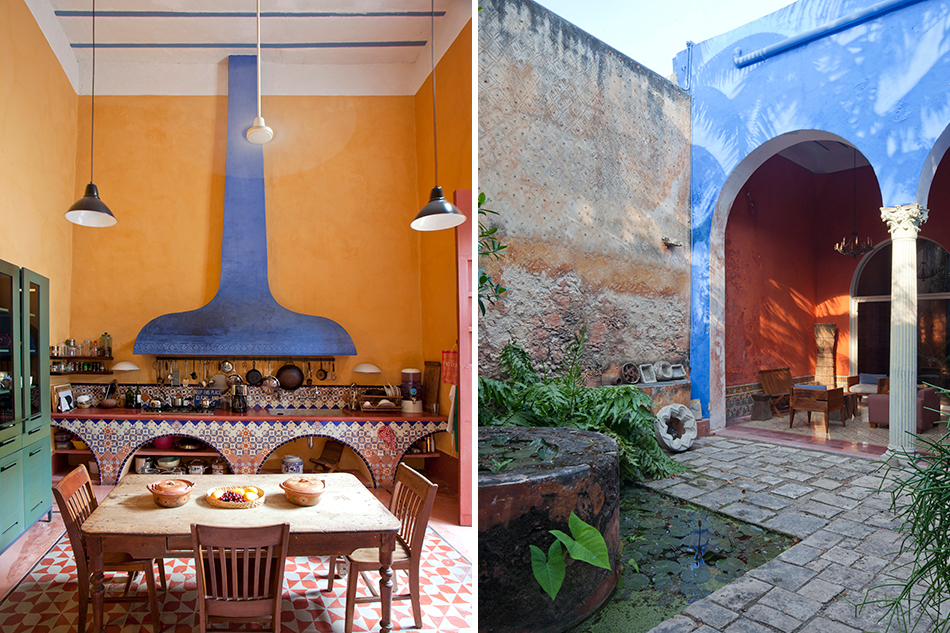 Left: In the home of local architecture and design duo Josefina Larraín Lagos and Salvador Reyes Ríos, the kitchen counter is decorated with traditional Talavera tiles from Puebla. Right: The entry loggia is outfitted with furniture designed by the owners. 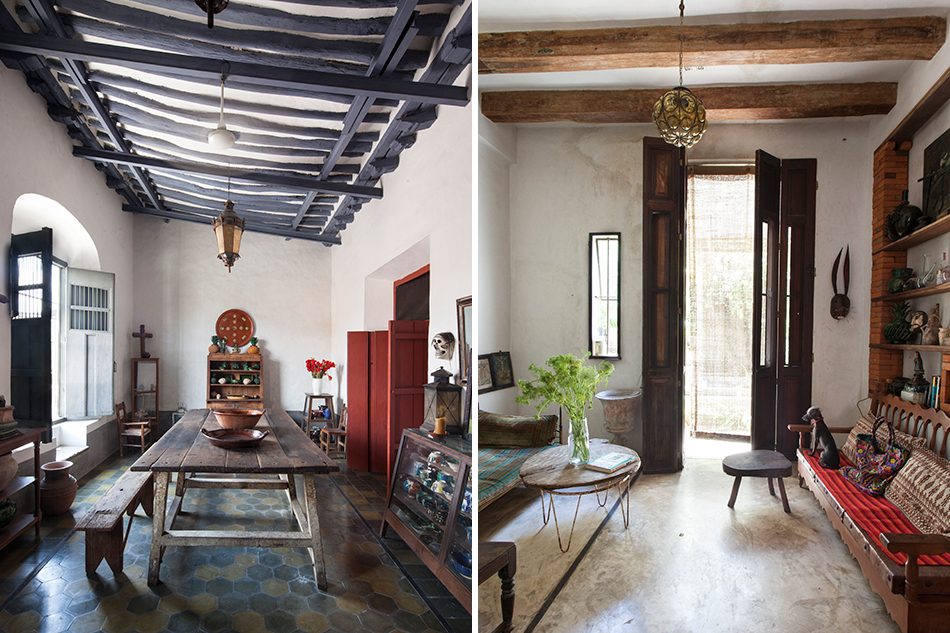 La Ermita de Santa Isabel is one of several area properties owned by business partners John Powell and Josue Ramos, who restore and rent historic homes. Left: The dining room houses a restored baker’s table and Powell’s collection of Mexican pottery. Right: A sitting room leads to the back garden. 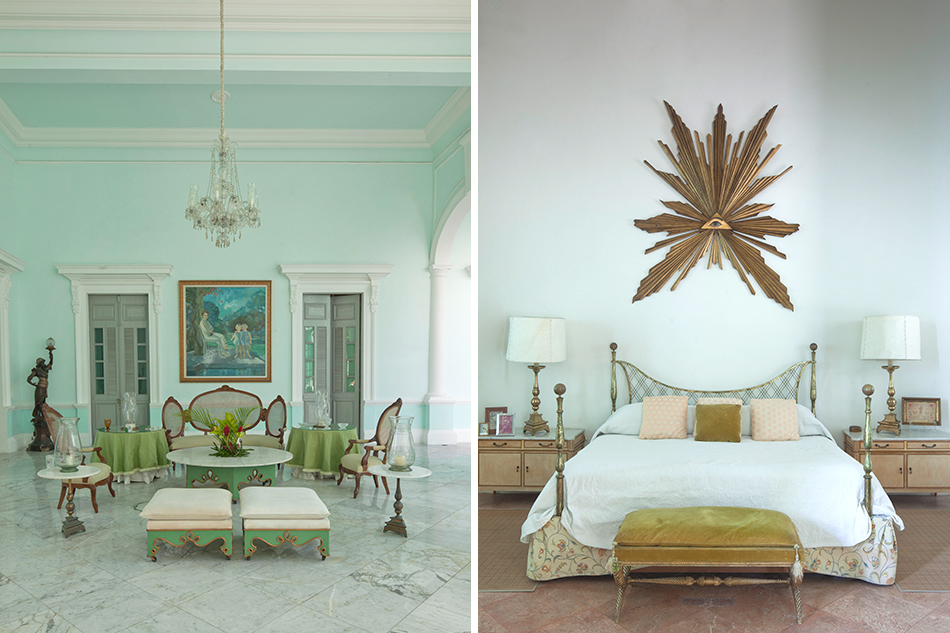 The late film producer Manuel Barbachano Ponce transformed his childhood school into the grand private home Las Alamandras in the 1960s. Furnishings by Arturo Pani can be found on the loggia (left) and in a bedroom (right). 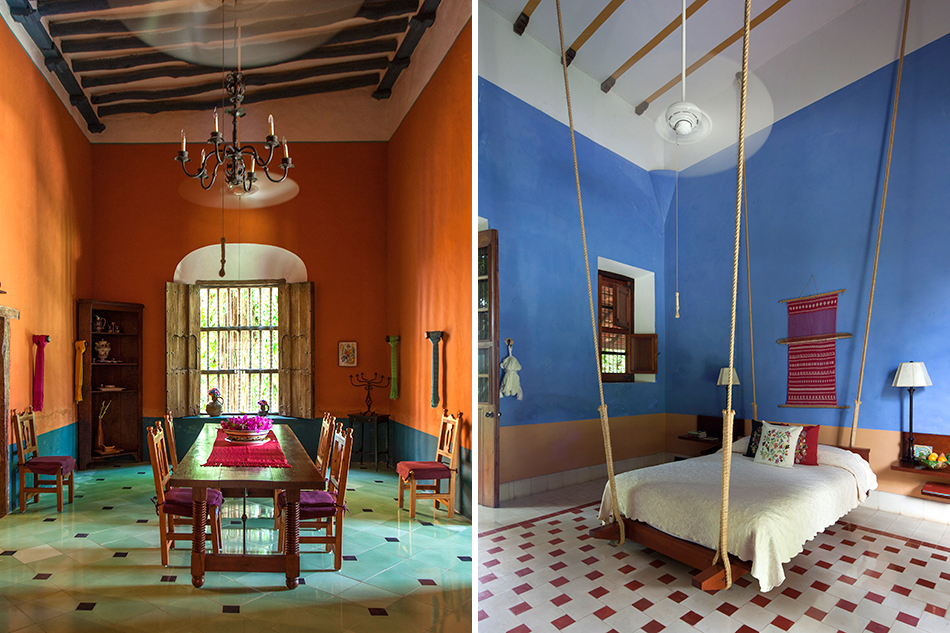 Hacienda Petac, a 17th-century colonial cattle ranch, was also restored by Reyes Ríos and Larraín’s studio. Left: The main dining room includes traditional Mexican furniture. Right: A guest bed designed by the architects is hung from the ceiling by ropes. 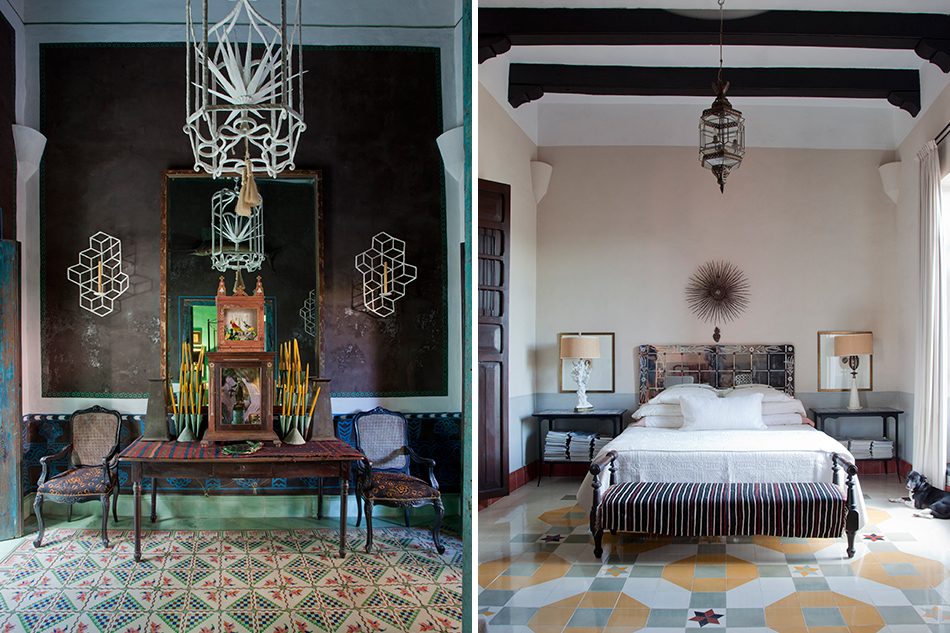 In Casa Ramos Espinoza, another home belonging to Josue Ramos, a passageway (left) features lighting of the owner’s design and French chairs reupholstered in Mexican textiles. The master bedroom (right) was a new addition on the second floor. 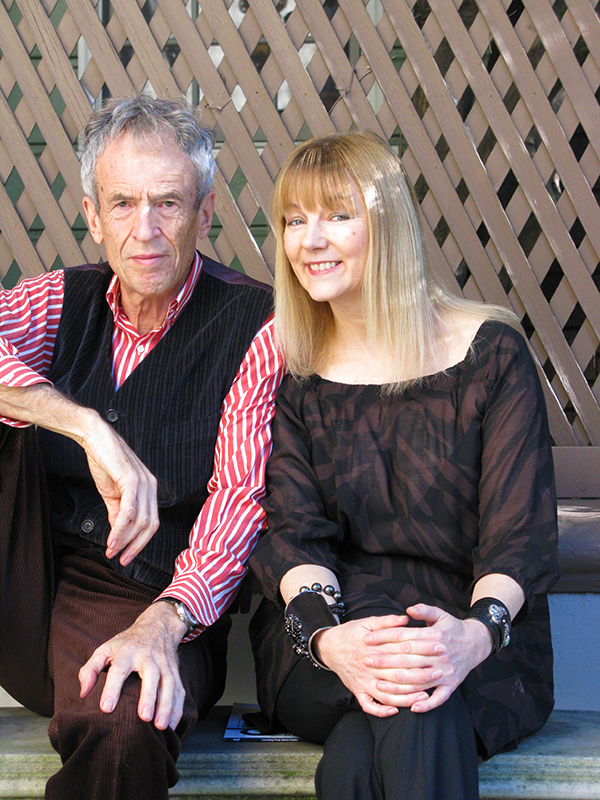 We peek inside Casa Reyes Larraín, which exemplifies contemporary Mérida style. The structure was restored by Reyes Ríos + Larraín, whose principals, Salvador Reyes Rios and Josefina Larraín, are also its owners. The architecture and design team, known for skillfully transforming large houses in the Yucatán into small hotels, maintained the home’s character while seamlessly adding modern elements, such as up-to-date plumbing and lighting and a delightful mix of Mayan textiles and custom-designed and antique furniture.

Then there’s the Beaux Arts confection Los Almendros, a whitewashed plantation-style house from Mérida’s gilded age. Purchased in the mid-1960s by famed film producer Manuel Barbachano Ponce, it features furniture and objets created by legendary mid-century modern Mexican decorator Arturo Pani. On the other end of the stylistic spectrum is Casa Pardo, an industrial building transformed by the artist and MacArthur “genius grant” recipient Jorge Pardo. Noted for blurring the distinction between art and design, Pardo filled the house with “playful visual surprises,” such as a painting in the dining room based on Diego Velázquez’s 1656 masterpiece Las Meninas, which nods to Mérida’s Spanish Colonial past.

A list of resources at the back of the book should prove invaluable to design aficionados interested in exploring Mérida and the Yucatán. As Casa Mexico makes clear, it is a region well worth visiting, illustrating what the Mexican poet and Nobel laureate Octavio Paz meant when he said, “History is still alive: It is a present rather than a past.”