Inspired as much by the high modernism of Richard Meier as he is by the natural environment in which his buildings sit, Miami-based architect Chad Oppenheim is enjoying a particular moment in the sun — in South Florida, Aspen, Switzerland and beyond. 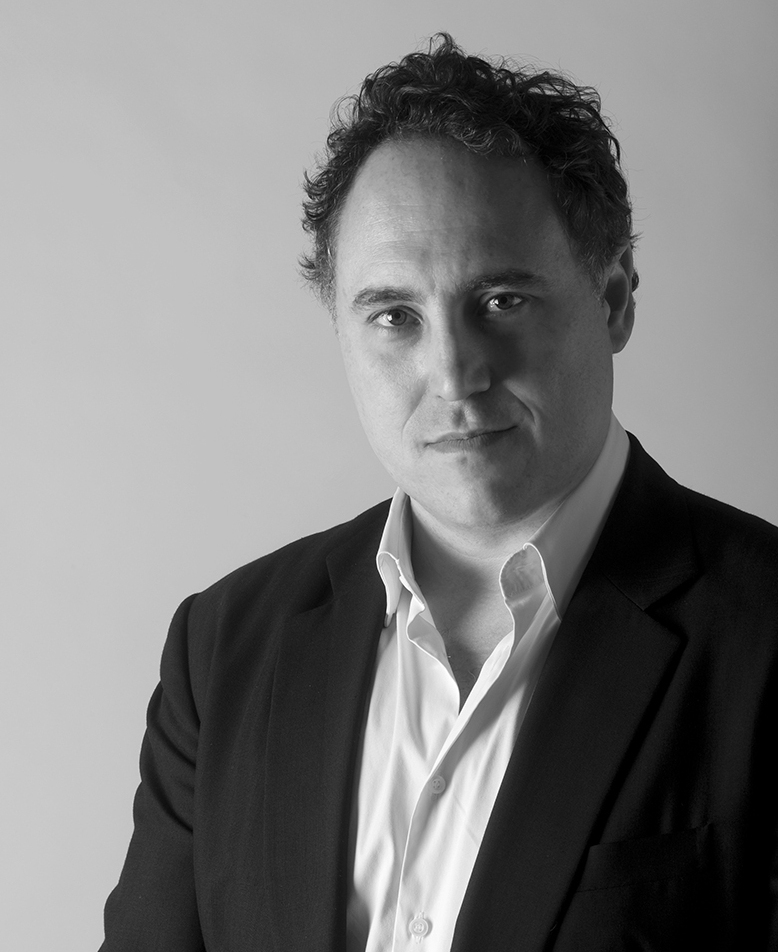 With offices in both Miami and Basel, Switzerland, Chad Oppenheim heads a 30-person architectural practice whose high-profile projects push the boundaries of modernism. Above: Oppenheim’s home in Aspen, which he named La Muna. All photos courtesy of Chad Oppenheim Architect + Design

An architect with offices in Miami and Basel, Switzerland, would seem to have two very different points of reference — sunny shores one week, mountain views the next. Yet Chad Oppenheim, designer of muscular-but-playful modernist buildings all over the world, is equally comfortable in both realms (he has a house in Aspen, too) and has carved out something of a specialty when it comes to highlighting views and experiences of the outdoors in its many disparate forms. “We’ve got a tremendous desire to celebrate the natural world in our work,” he says, “and to let the architecture be kind of submissive to the duty of place.”

This deferential sentiment isn’t necessarily something you’d expect of someone whose high-profile friends include musician Pharrell Williams (with whom Oppenheim made a music video related to their shared interest in helping Haiti) and director Michael Bay, for whom the architect recently completed a 30,000-square-foot Los Angeles house.

At 43, the New Jersey native is, to put it simply, pretty cool. And, given the profession’s generally gray-haired leadership, he’s relatively far along in his architecture career, too. This is in no small part due to his skill at getting out of the way of natural beauty, but his genial talent for schmoozing hasn’t hurt either.

He’s best known for clean-lined, high-end apartment buildings and hotels in Florida and other warm spots, but his 30-person practice takes on a wide variety of work: single-family houses, hotels and even urban planning.

“The largest project we’ve ever done was the design of a city for one-hundred-and-fifty-thousand people in Abu Dhabi,” says the chatty Oppenheim of a still un-built plan. The kind of range he tackles is “exciting but sometimes challenging,” he adds. “One minute you’re talking about a doorknob and the next you’re talking about a seventy-story office building.” 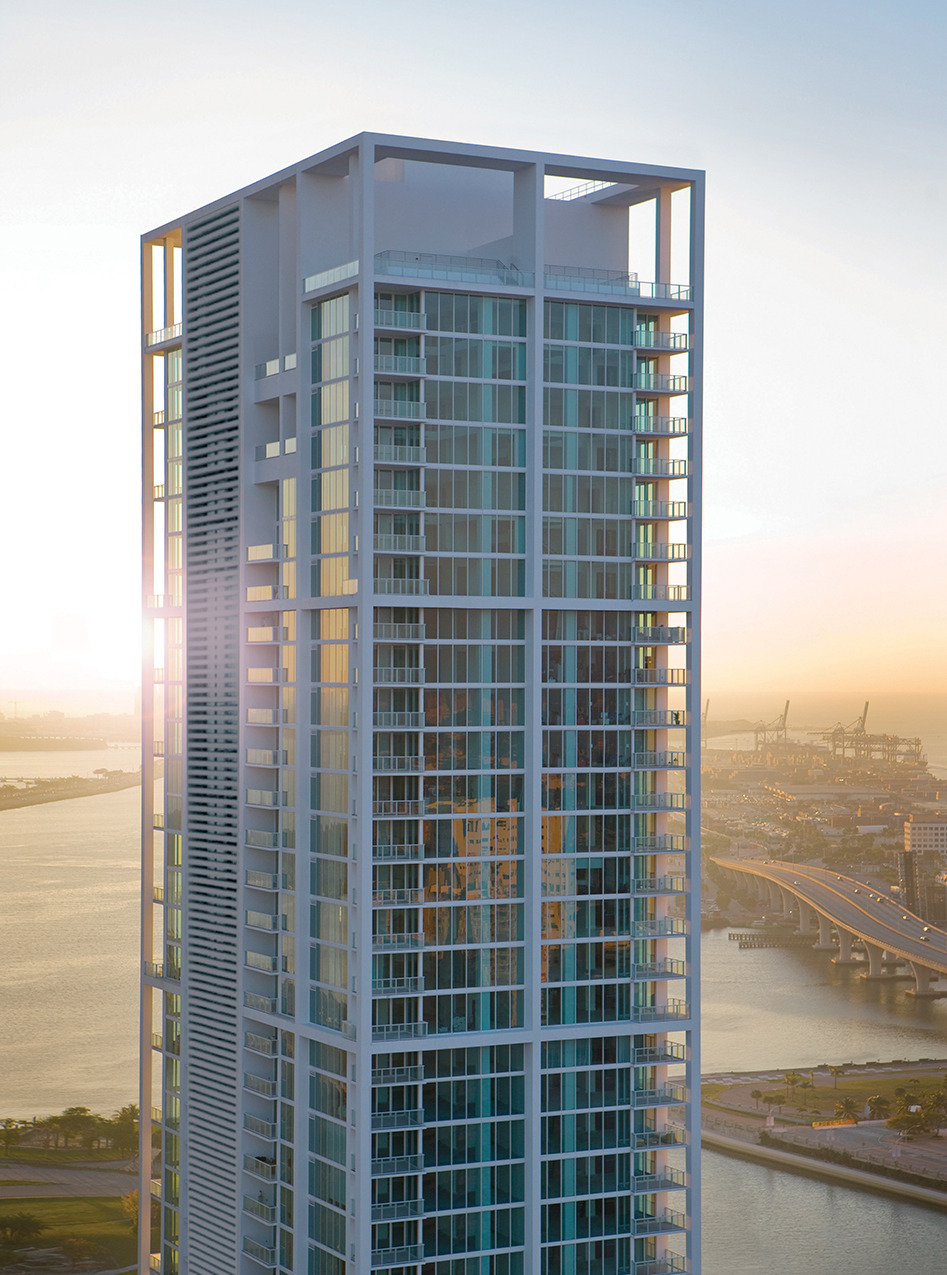 Oppenheim likes white — as do the people who buy apartments in Miami — and in projects like the small Ilonabay townhouse complex there, his gleaming geometries seem to be channeling Richard Meier. Oppenheim has long admired the older architect’s work, and even went to Cornell because Meier had in the 1950s. (The two have since become friends.)

But as he evolved, he says “I became more interested in other things rather than rigid geometry. I let it be a variable in the work.” And, indeed, upon closer inspection, Ilonabay, completed in 2006, reveals some quirk to its design. The building’s support columns, for example, are canted at an angle instead of being squared off, giving it a more friendly air.

For Ten Museum Park, a white 50-story tower in a prime location on Biscayne Boulevard, just steps from the new Herzog & de Meuron-designed Pérez Art Museum Miami, Oppenheim gave his building what he calls a “crisp, well-proportioned exoskeleton,” but staggered the balconies. This gives it a jolt of the unexpected while still keeping the focus firmly on what’s outside. “When you’re on the 50th floor of an apartment building in Miami Beach,” he says, “it’s about ‘Wow, look at this incredible view of the ocean, look at the city, look at the sky, the water.’ ”

Oppenheim often favors a scaled-up, rectangular opening for his work in tropical climes — the equivalent of a picture window, but writ large. A project that came to be called “House on a Dune,” on the Bahamas’ Harbour Island, is essentially a big rectangular breezeway in weathered wood, leading out to a deck overlooking the ocean. The breezeway connects all the spaces — to the left are guest suites, to the right a kitchen area and master suite.

“We’ve got a tremendous desire to celebrate the natural world in our work,” Oppenheim says, “and to let the architecture be kind of submissive to the duty of place.” 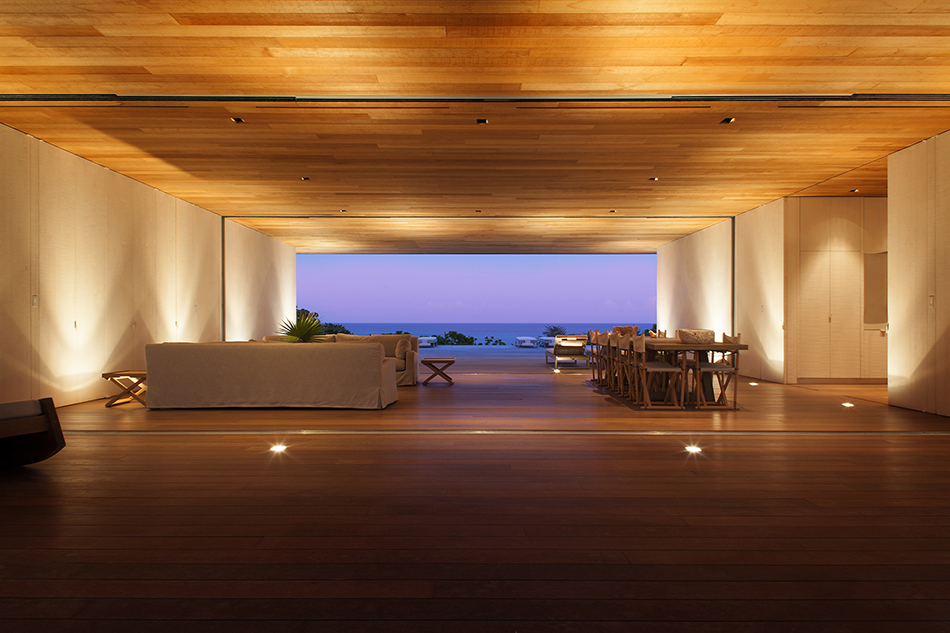 Oppenheim’s “House on a Dune,” on Harbour Island, in the Bahamas, is organized around a dramatic central breezeway. 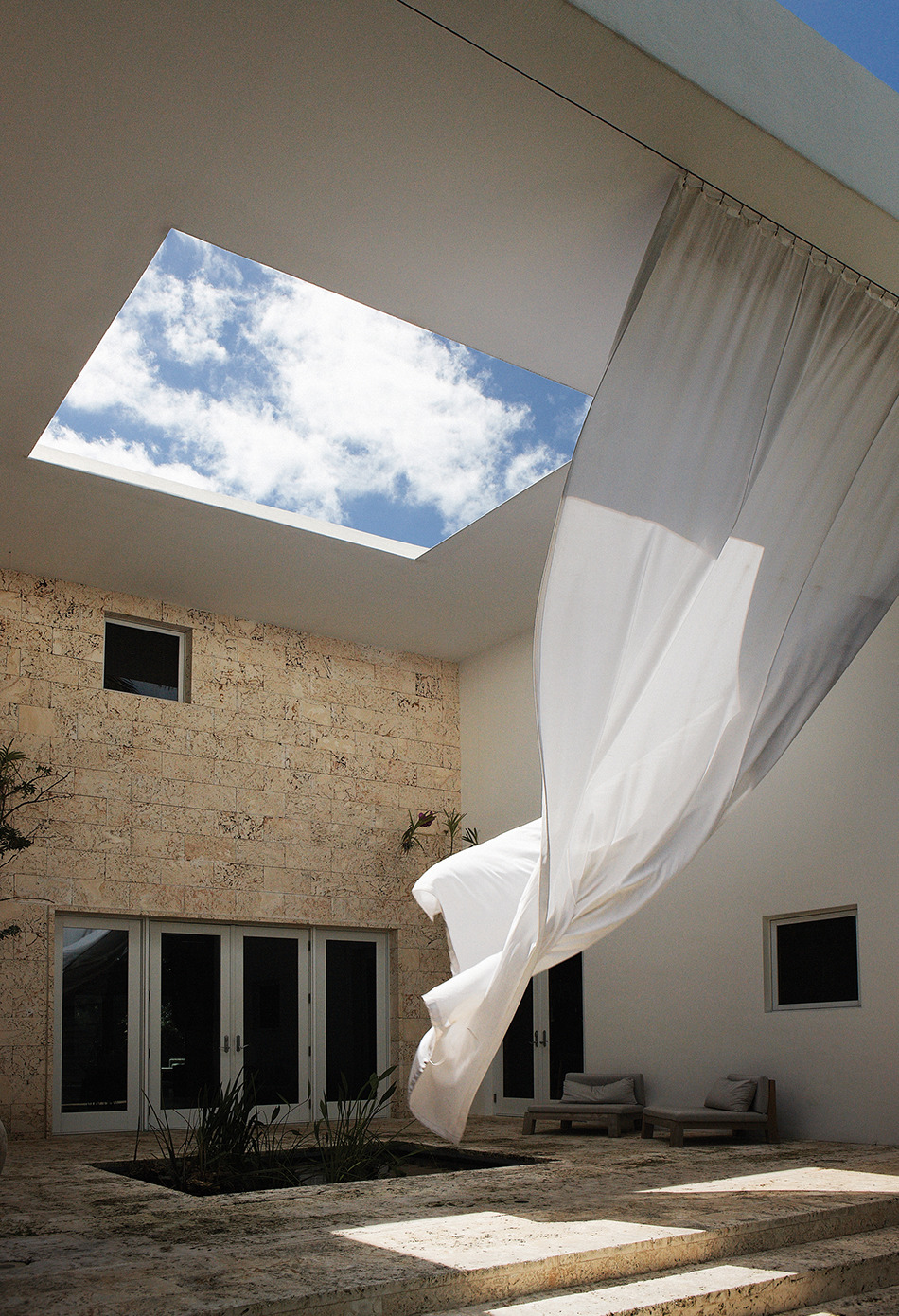 In the lofty, open-air entrance court of Oppenheim’s own Miami home — which he calls Villa Allegra — a reflecting pool lines up with an oculus positioned just above. Photo by Laziz Hamani

“I like architecture from the days when there were no architects,” says Oppenheim, citing Native American cliff dwellings in particular. “They used whatever materials were around then and built these incredible structures that are still incredibly beautiful. It was shelter, and no one was thinking about getting a Pritzker Prize.”

Not that he would turn one down. Oppenheim has been ambitious about building since he was very young. “When I was seven, my parents started working with an architect to build a home in New Jersey,” he says. “Up until that point, I wanted to draw cars. But suddenly I started drawing houses. My mother bought me Frank Lloyd Wright books. My friends were reading Sports Illustrated; I would be reading Architectural Digest.”

After earning his B.A. in architecture from Cornell, he moved to Miami and worked for the firm Arquitectonica. “As a kid, I would watch Miami Vice with my father,” he says. “I just thought — ‘Wow, that place is really cool.’ ” (Miami Vice’s opening credits famously featured Arquitectonica’s sleek Atlantis Condominium.) Things came full circle for Oppenheim 20 years later when the show’s creator and director, Michael Mann, told him, “Your work represents a new Miami,” and then shot part of the 2006 movie version of the TV series in Oppenheim’s own home. “I thought that was a highlight of my career,” the architect says.

Oppenheim hung out his own shingle in 1999, and his work has been increasingly honored of late, with his firm being named the American Institute of Architects’ Miami Firm of the Year in 2013, and two of his houses receiving kudos from the website Architizer. 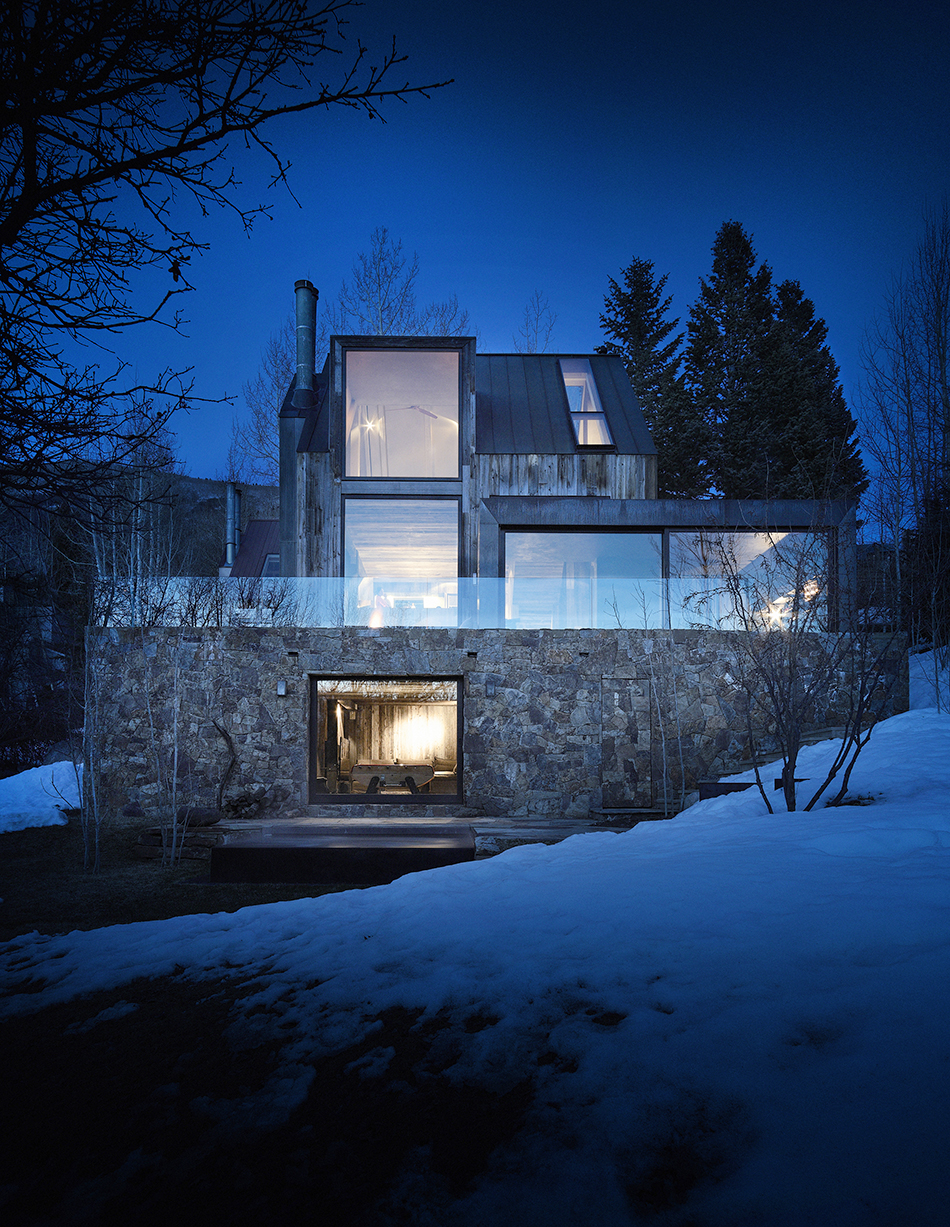 Large window openings in Oppenheim’s Aspen home connect the house to the great outdoors, as does its cladding, which mostly consists of regional stone and reclaimed wood. Photo by Laziz Hamani

The first is his own Aspen home, a 30-year-old ski chalet called La Muna, which was a patchwork of odd renovations when he bought it in 2008. Oppenheim made a small addition and re-clad the whole structure in stone, reclaimed wood and steel, using much of the same old wood for the walls both inside and out, keeping things minimal, rustic and warm. He calls the result “earthy, but modern.”

Adjacent to his Basel office is a new single-family house that was also noticed by Architzer. (Oppenheim’s wife, Ilona, is Swiss, helping to explain his frequent work in the country.) Inside, reclaimed wood, stucco and stone are spare and contemporary, but outside there’s weathered wood and one very bold gesture: To honor the lost volume of a barn structure that once stood there, the A-frame of the roof  de-materializes on one side of the building, with just simple steel beams completing the shape.

Although several of Oppenheim’s commissioned and designed projects have yet to break ground, they augur big things to come. A 2.6-million-square-foot mixed-use residential complex, the Marina Beach + Towers in Dubai, for example, resembles two curving metal slabs leaning back-to-back, with a lush tropical garden hidden in the space between them. Oppenheim freely admits that it was inspired by a Florida icon, albeit something of an unlikely one: 1971’s Contemporary Resort at Disney World, which also has two slabs leaning toward each other.

After finishing up work on the massive Michael Bay house — built into a hillside, echoing those Native American cliff dwellings he so admires — it’s clear that Oppenheim will continue to balance the tenets of clean-lined modernism with his own take on down-to-earth details. “A lot of modern architecture tends to be cold. For us, it’s more about the tactile, the scale and proportion.” He adds, “I hope our work continues to evoke the sincerity of those ancient houses.”