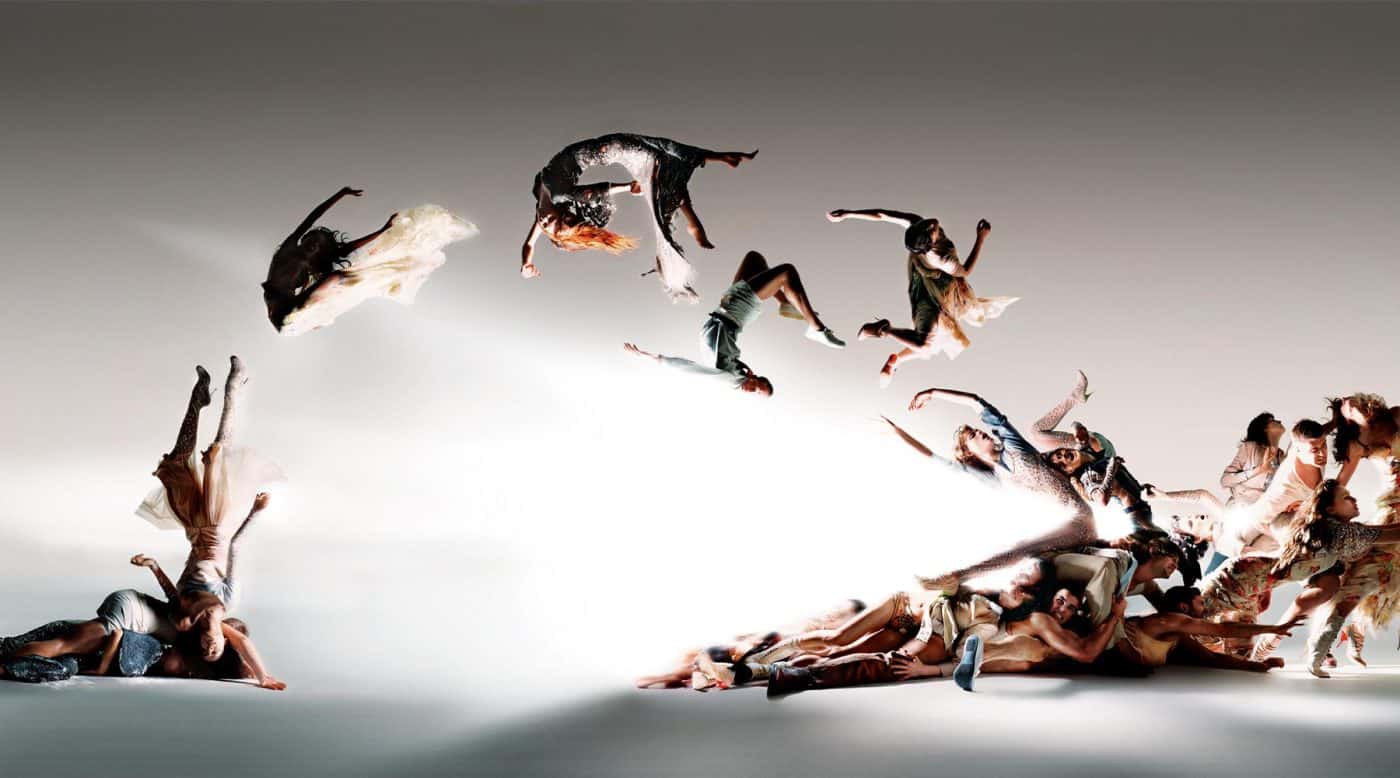 At his Zurich gallery, the former ad exec champions work by artists dexterously manipulating the form.

June 6, 2021In 2004, Christophe Guye, a successful advertising executive based in Zurich, was visiting the Art Basel art fair when he spotted two large-format, black-and-white aerial photographs by Balthasar Burkhard: one of Mexico City and another of desert formations in Namibia. He purchased them on the spot.

“They were unparalleled in terms of composition and sheer power, and they felt transformational, going beyond photography to become installations or monumental tableaux — I was blown away by his conceptual approach,” says Guye, who until then had collected mainly concrete-constructive works by such artists as Herbert Hamak, Cédric Teisseire and Bernard Aubertin.

“I’d spent fifteen years doing endless campaigns with photographers, but I never realized it was possible for photography to become something other than itself, to create its own visual language,” he continues. “I saw that you could transcend the limits of the medium as a presumed image of reality, and it could serve as a conduit for visual metaphors. It changed my life.”

Guye was hooked. He invited the dealer who had sold him the Burkhards, Walter Keller — the legendary director of gallery-cum-art publisher Scalo — to lunch. “I talked to him for hours and bombarded him with questions,” Guye remembers, “and that led to many more lunches, many more questions. I met with him countless times, in the meantime devouring practically every book and article on photography, and especially in relation to contemporary art.”

As their friendship grew, Guye confided in his mentor his newfound dream of opening his own photo gallery, and Keller proposed a collaboration. “My dream became a reality, and I made my passion my profession,” says Guye. He sold his agency to Young & Rubicam and relocated to Los Angeles, where he founded Scalo/Guye, a gallery and bookstore, in 2006. Four years later, he moved back to Zurich, reopening the gallery under his own name.

There, he specializes in photographers working in innovative, boundary-breaking ways, with a focus on Japanese and fashion photography. His roster includes Miles Aldridge (currently the subject of a retrospective at Fotografiska in New York through October 17), with his unsettling narratives that verge on the cinematic; and Rinko Kawauchi, whose mundane scenes evoke haiku poems; as well as French artist Stéphane Couturier, whose cityscapes, often taking their inspiration from Fernand Léger’s machine-age aesthetic, bridge the gap between painting and photography.

“Sometimes, when I see a photograph, it’s extremely emotional — something happens inside my heart,” he says. “But then, I need to go into my head. I do a lot of research in order to understand the work on a rational level, to know if it’s just a momentary seduction — if it’s an Eintagsfliege, a German idiom that uses the image of a mayfly, which lives for only twenty-four hours — or if it could be something more.”

Here, Guye speaks with Introspective about some of his most surprising and poetic finds and the transformative power of photography.

What’s the most unusual photograph you’ve ever shown?

The Mick Jagger/Leopard portrait by Albert Watson, a Scottish photographer born in 1942. In this image from 1992, there is no digital manipulation — it’s an old-fashioned double exposure in the camera, processed in a classical manner rather than created in the darkroom. The format is huge, seventy-seven by sixty inches, and Mick Jagger is immediately recognizable, thanks to his unmistakable lips. The way he looks down at the viewer is incredibly powerful.

What photograph in your gallery best represents the kind of work you’re attracted to?

Have You Ever Loved Me?, a 2010 image from the “Aporia” series by Korean artist Jung Lee. Her work pushes the boundaries of photography, combining it with installation and poetry. Her images touch me above all because of the endless romance they embody.

This series was inspired by A Lover’s Discourse, by Roland Barthes. As we endlessly consume the clichés used to describe love, these “sweet nothings” seem ironically to reveal the sense of unanswered desire, solitude and sorrow in contemporary society. Aporia in Greek means coming to a dead end. Crying out for love in desolate places, the images express a dead end that can’t be solved through logic.

Is there a photograph you regret selling?

Are you working with any important private collectors or institutions whose names you can share with us?

Providing long-term consulting services and guiding and encouraging new collectors are some of my principal activities. Collections I work with include the Victoria & Albert Museum; the Credit Suisse Collection; the Nicola Erni Collection; the Sharjah Art Foundation, in the United Arab Emirates; and LVMH, in Paris. Some private collectors are Her Royal Highness Princess Lamia Bint Majid Al Saud, Kim Kardashian and Philip Niarchos, to name just a few.

Do you have a photograph you love too much to sell?

To be honest, I have a great deal of difficulty letting go of them all! But there is one that has a very important position in my collection — Untitled #3, by Daisuke Yokota, a remarkable young Japanese artist. He uses multiple layers of rephotographing to obtain happy accidents and thereby assimilate his ideas of how memory is shaped and evolves over time. He says, “Memories are experienced in relation to the present. As we go through the act of repeatedly recalling our memories, I believe these memories change in relation to what is happening to us now.”

What is your dream photograph, the one you would most want for your own collection?

SNM5A-031H, from 2014, by Bae Bien-U, the most famous Korean photographer. I organized exhibitions with him in 2009 and 2012. For almost forty years, he has focused his creative energy on the Korean pine tree, taking hundreds of pictures of the same motif, mainly in the same environment — the royal tombs in the mountains of Gyeongju — almost always in the fog, almost always in black and white.

His works are charged with incredible spirituality, and they speak of reverence for our ancestors, the past, tradition. A breathtaking beauty is revealed in the curved forms of the trees, like calligraphy. I will soon be organizing another exhibition of his most recent works, and I would love to have one of his photographs in my collection. 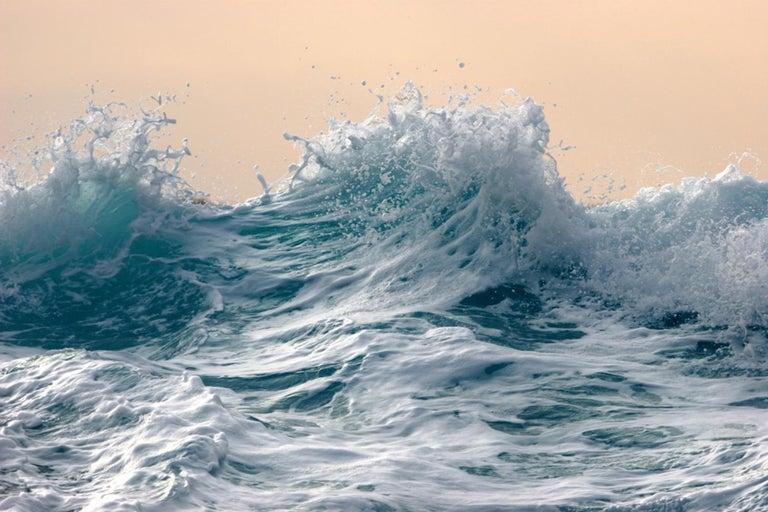 “The ‘NAMI’ series is made by Syoin Kajii, a young Buddhist monk who also works actively as a photographer. He depicts waves along the shores of Sado Island, in Japan, capturing the dynamic power of the ocean in stark contrast to well-known Japanese photographer Hiroshi Sugimoto’s tranquil seascapes. Kajii waits patiently for nature to create the image, carefully gauging the speed of the wind and level of the waves. This stunning work is a close-up — the artist is practically in the water.” 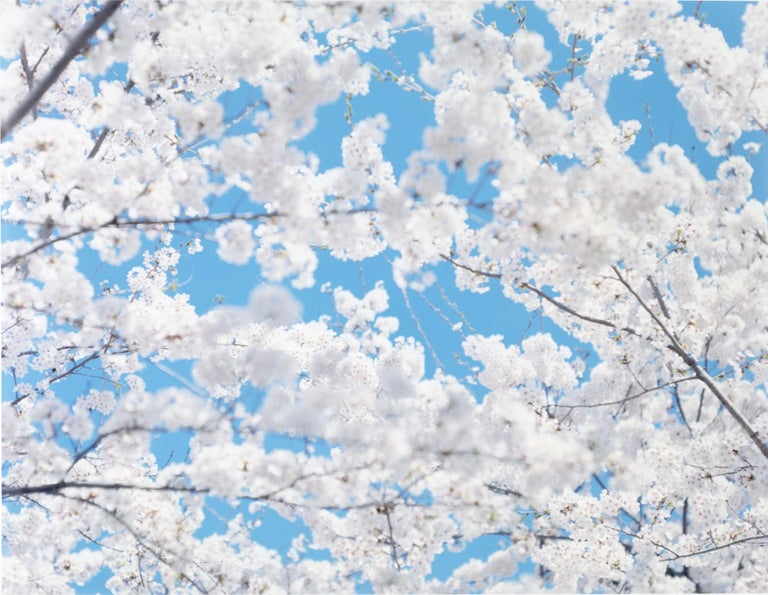 “The blooming of the sakura (Japanese for ‘cherry blossoms’) symbolizes hope and strength after the long winter, but as the petals fall, they are also reminders of the fragility of beauty and of life itself. Risaku Suzuki’s painterly photographs evoke the sensation of passing time. The trees, tightly cropped, are captured without context and without a literal narrative. By abandoning the ground and concentrating on the relationship between the blossoms and the sky, the artist gives these large-format works a sense of weightlessness.” 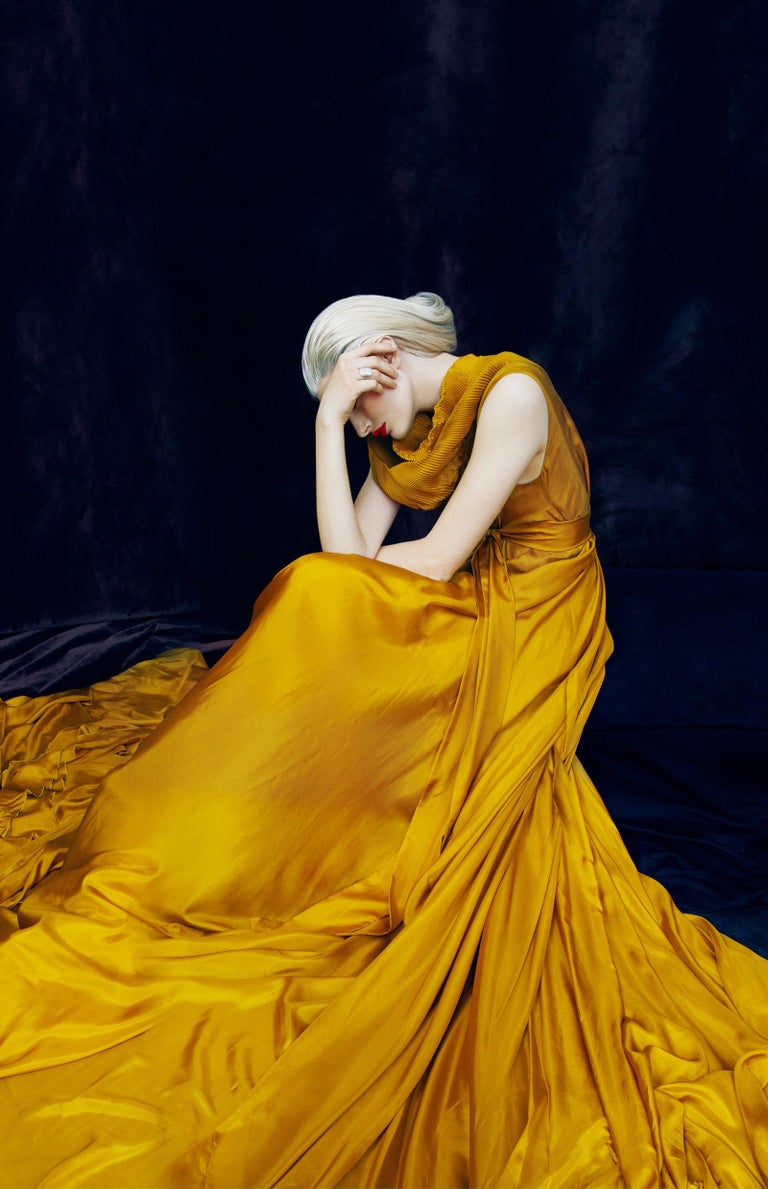 “In contrast to many of today’s fashion photographers and their defiantly ‘anti-fashion’ images, which attempt to shock viewers, Erik Madigan Heck is an anomaly. This young photographer has developed a highly personal way of working, making images that are unashamedly beautiful. Working with natural light, creating his images with in-camera effects combined with digital postproduction, he produces evocative, dreamlike images that take their inspiration from painting and seem both timeless and futuristic.” 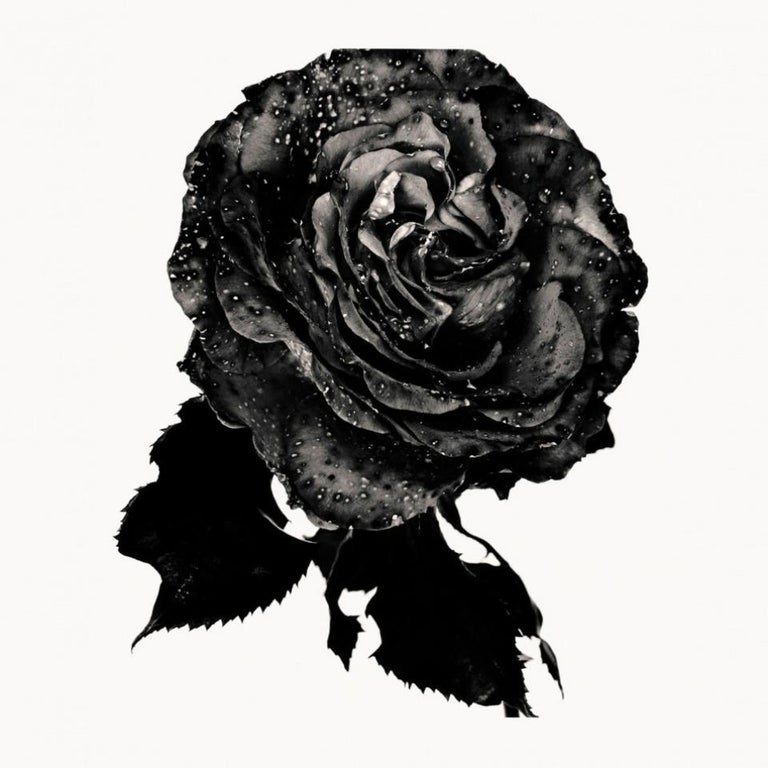 “For more than thirty years, Nick Knight has pushed the boundaries of fashion photography and helped to invent progressive new ways of making images. He challenges conventional ideals of beauty, at times in very controversial ways, and is recognized as one of the world’s most influential, most visionary and most acclaimed photographers. His work varies, from more-accepted conventions of fashion and editorial photography to abstract and picturesque figurative imagery. This image was created as part of a personal project, ‘Plant Power,’ an exhibition of work shot over a more-than-three-year period at the Natural History Museum in London among the more than six million specimens in the museum’s herbarium.” 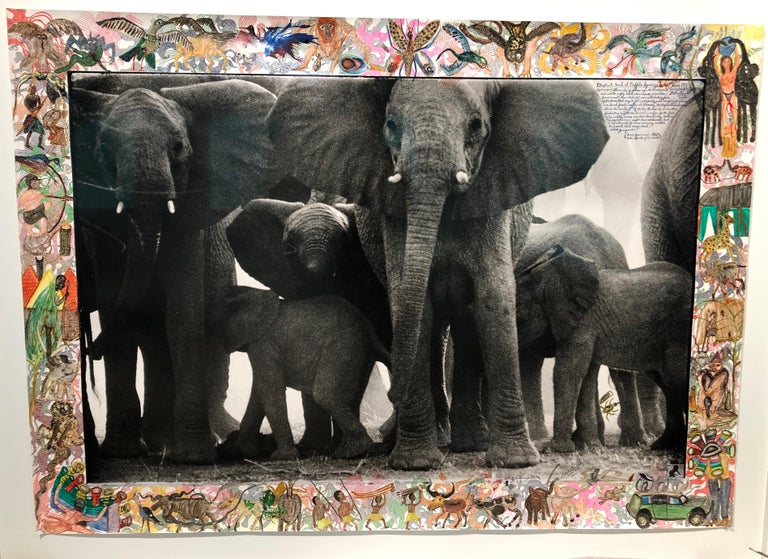 “I started working with Peter Beard when I had my gallery in Los Angeles and continued working with him and his wife, Nejma, until his death. He was a legend as a person, as a celebrity and as an artist and deeply dedicated to nature. His pieces are stunning and unique — for me, nothing else in contemporary photography compares. His most sought-after works, like this one, are embellished with handwritten poems and phrases and painted frames made in collaboration with Kenyan artists. This is definitely one of his most beautiful.” 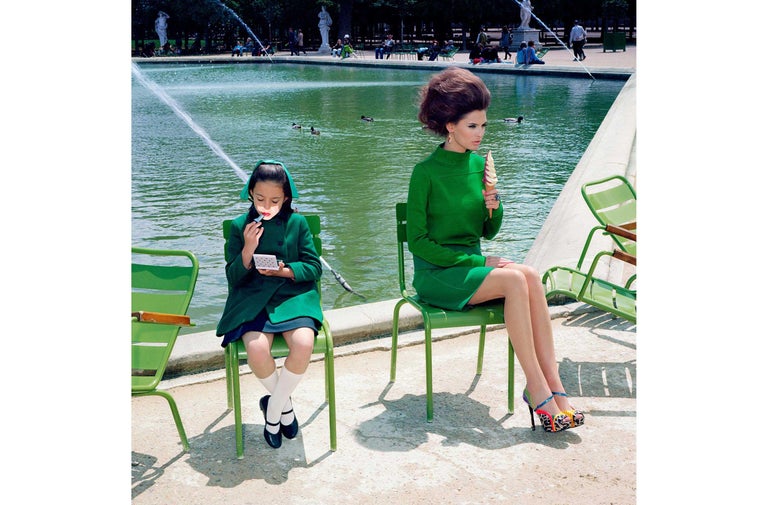 “Miles Aldridge is best known for the Technicolor, dreamlike worlds he creates and the glamorous women who inhabit them. His ultra-cinematic images draw inspiration from such directors as David Lynch and Fellini, as well as the psychedelic graphic design of his father, Alan Aldridge. His photographs are reminiscent of film stills, pictures featuring smartly styled decor with saturated colors and an unsettling psychological vibe. They tend to oscillate between high-gloss and grotesque. He says there is always a ‘push and pull’ between high and low in his work.” 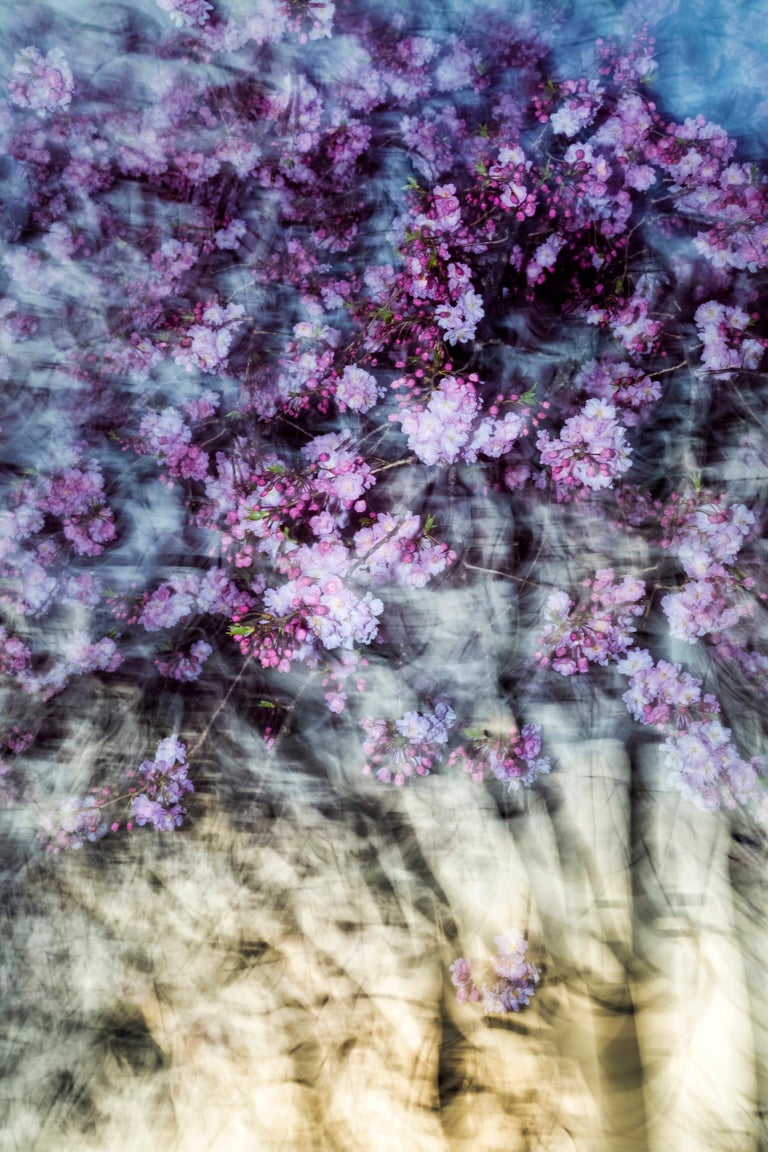 “Yoshinori Mizutani’s photographs demonstrate his innate understanding of how forms, colors, textures and depth can be translated to the pictorial plane. In these images of cherry blossoms, which are the metaphor for life’s transience, he experiments with blur, motion, layering, long exposures and saturated color to embody the visual experience of wandering among the blooming trees in a meditative state. This mesmerizing image conveys not only the specific moment when the photograph was taken but also a feeling of time passing.”