Jeweler Clarissa Bronfman Has Refined Taste and a Bohemian Spirit 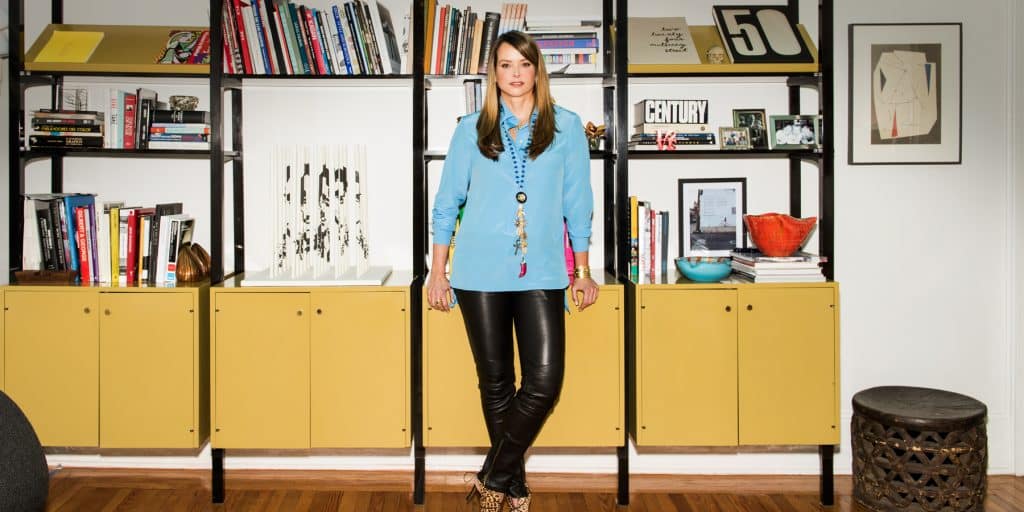 Inspired by the gems her family presented her as gifts, the Venezuelan-born jewelry designer started creating pieces with a social message. 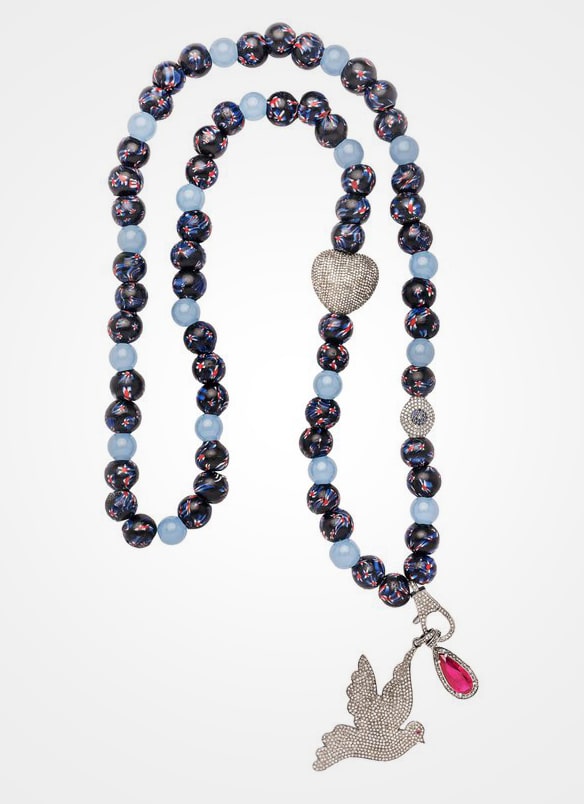 February 19, 2018A former athlete, Clarissa Bronfman didn’t develop a passion for jewelry design until a few years ago. Now, her collection includes pieces like this African beaded necklace with a bird pendant. Top: Bronfman, in her Amy Lau–designed New York studio, wears her Slave to Love Symbol Tree necklace.

Most jewelry designers come to the field through, well, a love of jewelry. They coveted their mothers’ gems as children or became fascinated with the sculptural possibilities of jewelry making and its ancient history. Not so Clarissa Bronfman. Quite the contrary, in fact.

Bronfman, the tall blonde wife of Edgar Bronfman Jr., former chairman and CEO of Warner Music Group, never showed much interest in jewelry at all. “I was a sports girl,” says Bronfman, who was a track and field star in her native Venezuela. “It was a no-no to wear jewelry in training.”

The women in her family, however — including her mother, grandmother and aunts — adored the sparkling accessories and occasionally gave her pieces, which she inevitably put away in a drawer.

Only about five years ago, after inheriting more gems from her late mother, did she start on the path that would lead to the launch of her namesake brand of jewelry (now available on 1stdibs), one distinguished by a boho-chic vibe and an innovative mix-and-match system of charms. First, she reconsidered the trove she had rather casually built up. “I have to do something with these beautiful pieces that otherwise I’m not going to wear,” she recalls thinking, as she sits curled up, shoeless, on a sofa in her Amy Lau–designed Upper East Side atelier, which is filled with modern furniture and smells like lavender. “I realize a lot of people sell their jewelry. What a shame to get rid of things from the past when they’re so meaningful.”

Still, wearing individual pieces the way her mother had wasn’t her thing. Instead, Bronfman took some of her favorite pendants from different pieces and had a jeweler combine them into a unique necklace of her own design. “I said I want it to represent what I believe in, which is tolerance — religious tolerance,” she says. “I had a lot of crosses because my family is Catholic. Having married Edgar, who is Jewish, I also had two Jewish stars. I have some friends who are Buddhist, so I had a couple of Buddhas. I had an Allah. I put them all in the first necklace. The charms had a meaning.” 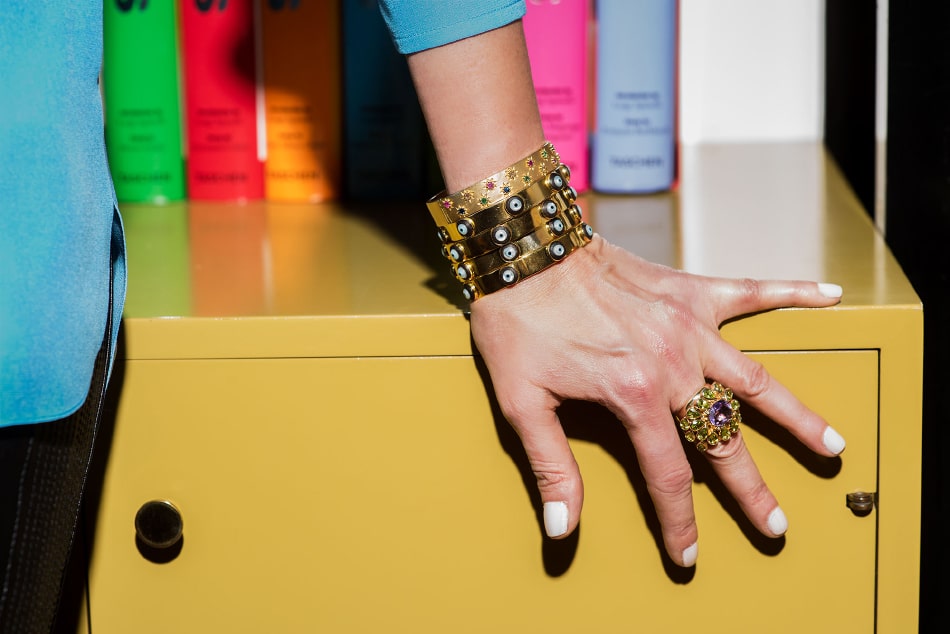 Bronfman wears a Dinorah bracelet with a stack of Evil Eye gold bangles, and an Andrea ring. 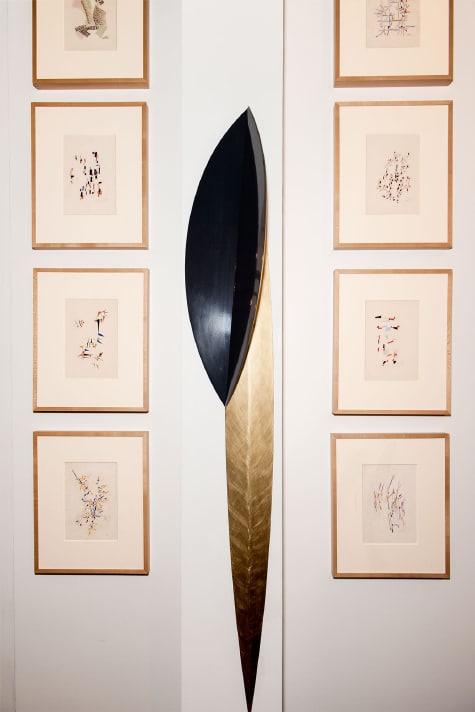 In London, where the couple and their four children were living at the time, the necklace attracted a stream of compliments — and requests. Most of the women who asked her to create something similar for them didn’t have their own charms, so she made the rounds of auction houses and antiques stores. “It was a lot of work,” she says. Bronfman herself approached the work thematically. “I’d say, ‘Do you want it about protection? Or religion? Or happiness?’ ” But most of her “clients” really just cared that the charms were pretty.

When the family moved back to New York in 2012, she decided to take a stab at turning the necklaces into a business. She’d been both artistic and entrepreneurial as a teenager, earning enough money photographing children’s birthday parties to buy her first car. She’d also studied business, first in Venezuela, then at New York University, and had worked at Ogilvy & Mather and a Venezuelan steel company. So, using charms she’d picked up on her travels in Europe, she made her first collection of about 80 pieces and held a trunk show in her father’s Manhattan apartment. One hundred twenty people attended, snatching up 90 percent of her inventory.

“I would collect very high quality, lower quality, but charms that spoke to me,” she explains. “Some were antique, some were modern. That’s when it occurred to me that that’s part of the tolerance: I accept old, I accept new, I accept high, I accept low. My line respects every aspect of life.”

The more clients she acquired, the more their individual likes and dislikes created headaches for Bronfman and her tiny team. Mixing religious symbols, in particular, made some women uncomfortable. Finally, she had a eureka moment: Instead of soldering all the charms to the necklace, she would attach some with clasps, allowing for easy removal. That innovation sparked the idea for another versatile design. She connected a short string of charms to a large pendant on a long strand of colorful stone beads, making it detachable to serve as a bracelet. “It became more fun, more irreverent,” she says.

Trunk shows in London, Gstaad, Geneva, Kuwait and other places favored by the international moneyed and well-dressed set established a solid following. “It started to become a real business, and that’s when I said, ‘Uh-oh,’ ” she says with a laugh and an expression that conveys a decided ambivalence about what she’s gotten herself into.

It wasn’t as if she’d been having trouble filling her days. She is on the boards of seven nonprofit organizations, including Carnegie Hall, where she is vice chair; the Museum of Modern Art; and the Breast Cancer Research Foundation. And the family already had one business mogul, Edgar, an heir to the Seagram fortune and now a private-equity investor. When she told him she wanted to start a business, she recalls, “he was like, ‘What?!’ ” But, she adds, despite her many late nights — sometimes assembling necklaces with her team on the floor at home at 2 a.m.  — “he motivates me a lot.” 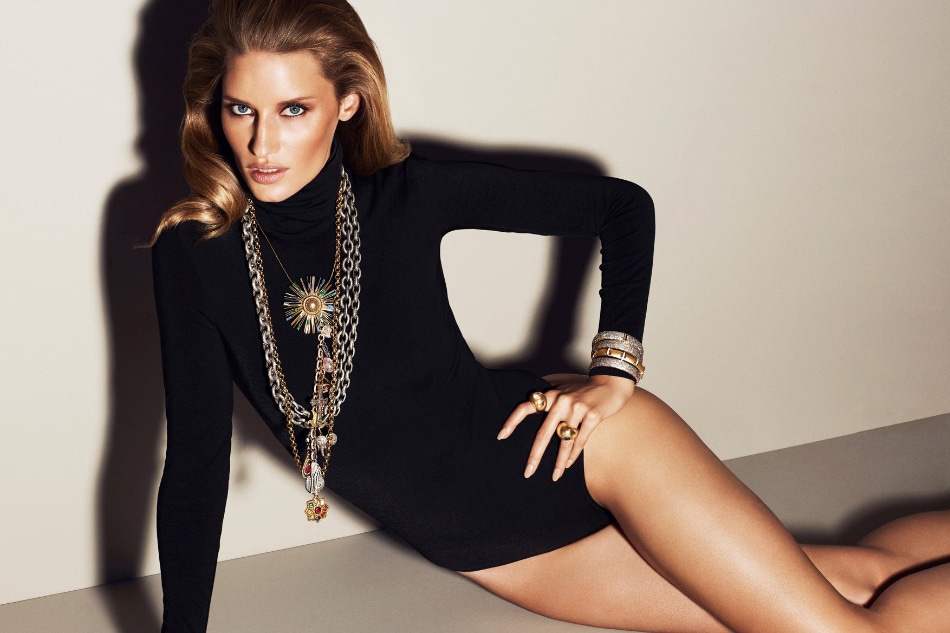 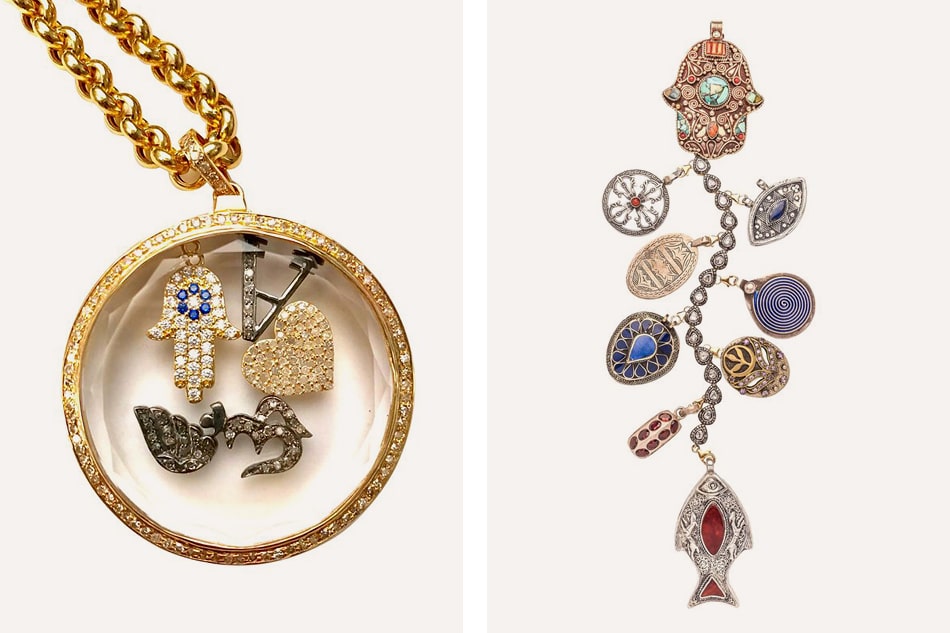 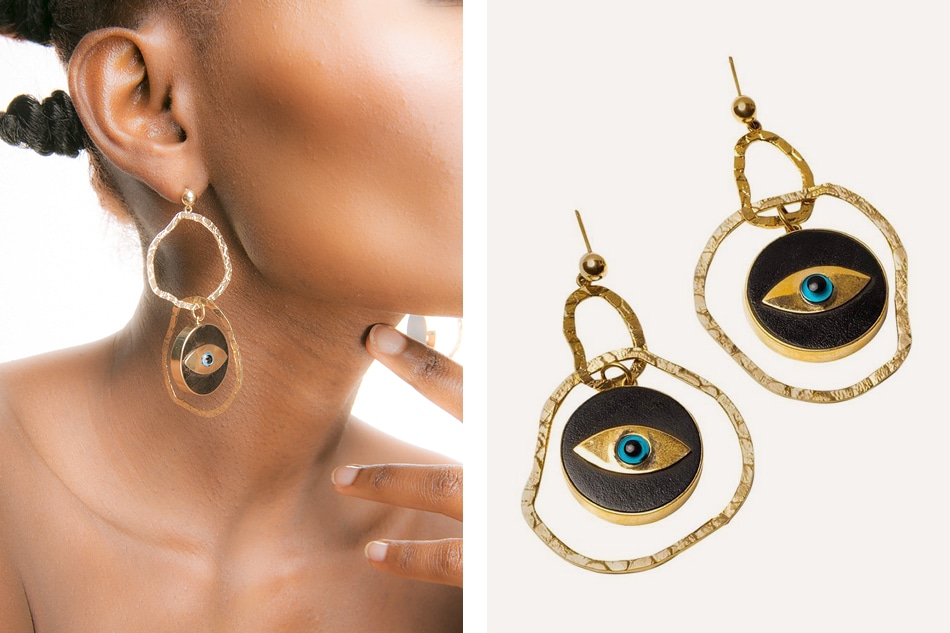 Bronfman, who was a finalist this year for the Fashion Group International’s Rising Star Award in fine jewelry, has branched out into earrings, rings and charm holders and two years ago began designing her own charms. “That’s been the part I like the best,” she says. An inveterate observer, she can find inspiration almost anywhere — the corner of a table, a glass of water, a Salvador Dalí painting. She reuses her own charms in her pieces, but mixes them with vintage ones in different configurations, so that each complete necklace or bracelet is unique. Often her finds inspire her designs, as when she strung together several sexually suggestive charms she picked up in Paris in a necklace she called G-Spot. “It sold in five minutes,” she says.

There are also gem-studded skulls, birds and leaves, as well as peace signs, fish, flowers, moons and stars, in materials ranging from precious metals and jewels to ebony and quartz. Eyes, believed by some cultures to ward off evil, are one of her signatures. “I love eyes,” says Bronfman, noting that they’re a recurring motif in her photography, too. “There’s something so personal and universal. Almost every necklace has an eye.”

“I realize a lot of people sell their jewelry. What a shame to get rid of things from the past when they’re so meaningful.” 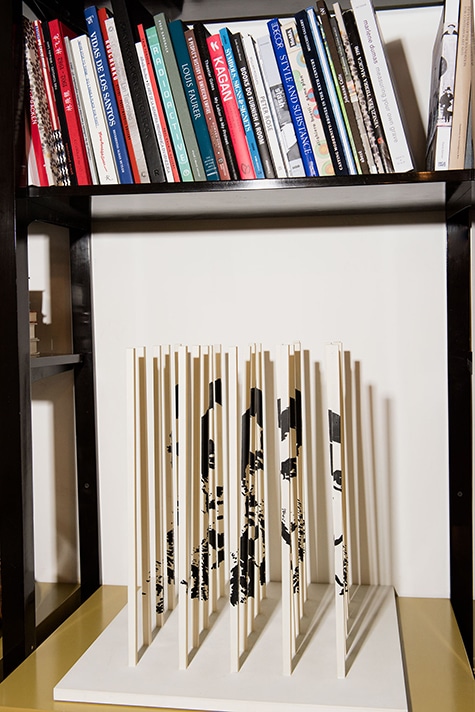 Hands are another symbol often used by Bronfman, who is drawn to the different meanings they have around the world, such as prayer and protection. There is a playfulness to many of the pieces, such as the new prototype of a two-way ring with a ruby that rotates to reveal a gold ball studded with diamonds.

Recognizing that every woman has her own taste, Bronfman has tried to make her collection as flexible as possible. But she has her limits. “Working in luxury goods, you have to listen a lot,” she says. “Not always what you think is great is great. But if I don’t like it, I’m not going to put it in a necklace.”

Prices range from about $1,000 to $15,000. Taking the advice of her two teenage daughters, she is intent on broadening her base and has begun developing a less expensive collection, priced below $3,000.

Bronfman had a peripatetic childhood, spending time in Caracas, Venezuela, as well as New York, Paris and London. She attended boarding school and summer camp in the U.S. At home, though, her father, an oil executive, insisted that the family speak French at the table. “It was a fight,” she recalls. Her mother collected art, and Bronfman bought her first artwork at the age of 12.

“I was with my uncle in Paris and fell in love with a photograph by Man Ray,” she says. “It was too expensive for me — it was, like, $800. The guy in the gallery said I could send him money every month. But he let me take the photograph.” For about two years, she gave her uncle small sums — $15, $20 — to send the gallery, finally paying off the debt. It wasn’t until she was 30 that her uncle confessed that he had paid the gallery on the spot and returned her payments to her father, who deposited them into an account for her.

Bronfman has continued to collect. On an early date with Edgar, she acquired a painting by the Uruguayan-born artist Joaquín Torres-García. The couple’s Park Avenue triplex contains works by Diego Rivera, Vik Muniz and Gego. Bronfman says selling her own creations has given her a new outlook on their work. “I have so much respect for artists nowadays because it is not easy,” she explains. “One necklace can take me easily a month until I feel it’s perfect. Then, to have someone say, ‘I don’t like it’ — ugh! It’s very hard. The same with photography.” 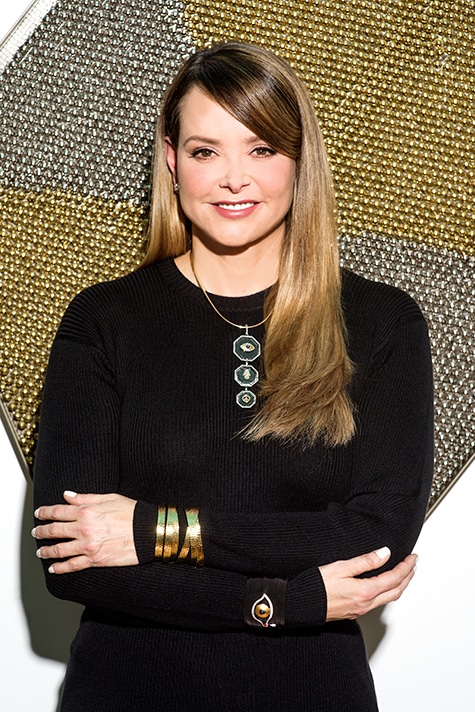 Although she found her creative voice in jewelry design only recently, she has long expressed herself through photography. In fact, she had originally intended the jewelry headquarters, an apartment near her triplex, to be a photography studio. Her father, also an enthusiast for the art form,  gave his daughter her first camera. Self-taught, she finally took a course last year at the International Center of Photography.

“The more I went, the more I realized how much harder I needed to work,” she says. “In a way it was great, because I became much more aware. In a way it was terrible, because now I’m thinking too much.”

She’s putting some of her lessons to the test on a 12-day journey to Antarctica in February with a small group of professional photographers led by two from National Geographic. “My father always said, ‘Have friends better than you so you will learn,’” she says. Shooting glaciers and penguins appeals to her; shy by nature, Bronfman always found portraiture, especially with strangers as subjects, very difficult. “That’s so painful.” Still lifes are a favorite, and she hopes to find a project that will fuse her photography and jewelry design.

For a woman who used to forget about her jewelry in the back of a drawer, Bronfman has become an expert in the relative strengths of different metals, the best sources for vintage pendants (1stdibs is at the top of her list) and the importance of a quality clasp. She may even be her own best model. More than once, she has been at some event or other and sold pieces right off her neck. Just the other day, she recounts, she was having lunch at Marea, in midtown Manhattan, when a new acquaintance complimented her on her earrings, an elongated pair with diamonds. Upon hearing that Bronfman had designed them, the woman insisted on buying them on the spot. “I told my jeweler we have to make more,” she says. “They did not last even twenty-four hours on my ears.”

Nowadays, Bronfman notes, “if I have a piece that I simply can’t part with because it has some of my mother’s or grandmother’s charms, I just don’t take it out.”