More Than Ever, This Year’s Collective Design Is Pushing Boundaries 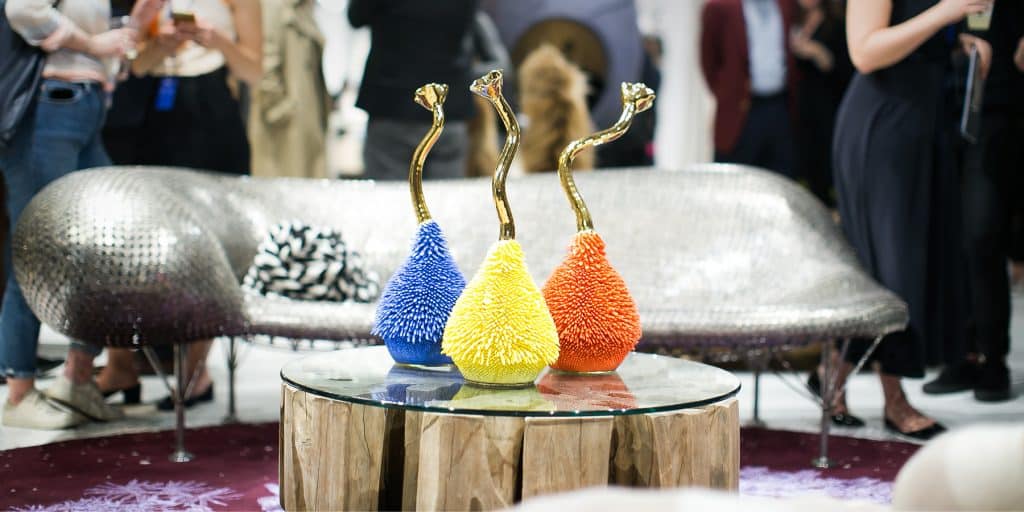 The groundbreaking contemporary New York fair — now in its sixth year — has changed venues and moved its date up by two months, to coincide with the Armory Show.

March 5, 2018Throughout his career as a New York City architect designing high-end residences, Steven Learner would regularly fly to Basel, Switzerland, to buy furniture for his New York clients from New York dealers — who had spent a fortune shipping the pieces to Europe. That’s one reason Learner started Collective, an annual design fair that has occupied a variety of industrial spaces around Manhattan over the past six years. Long held in May, Collective now runs from March 9 through 11. Its nearly 40 booths will be devoted both to galleries and to designers showing their work independently. These range from esteemed New York art dealer Julie Saul to Melbourne, Australia–based industrial designer Christopher Boots to Brooklyn’s trailblazing Fernando Mastrangelo, who is creating an installation that he is touting as his “first-ever fully sculpted living space.” Noting that 1stdibs also allows contemporary designers to present and sell their own work, Learner says, “I’m following the industry trend.”

There are other changes to this edition of Collective, which is moving several hundred yards north in the building where it was held last year: Skylight Clarkson North, at 572 Washington Street, in the West Village. The new space has windows on three sides, a metaphor for Collective’s efforts to reach out to the city. 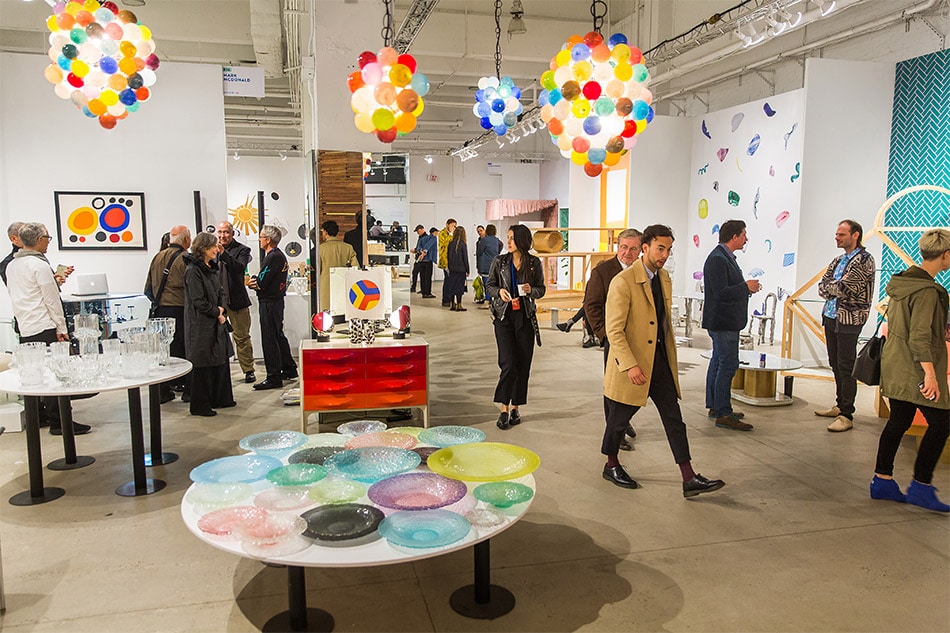 Founded by architect Steven Learner, the Collective design fair returns to New York City for its sixth annual outing this month, running from March 9 to 11 and featuring booths from 40 galleries and individual creators. The 2017 edition, seen above, was at Skylight Clarkson North, in the West Village, where this year’s will be as well. Top: R & Company‘s Collective installation from last May featured vessels from the Haas Brothers‘ “Accretions” series. Photos above and top courtesy of Collective

The May-to-March shift means the fair now runs the same days as the Armory Show and its satellite art fairs. “People don’t just collect design, and they don’t just collect art,” says Learner. “They collect both. So we’re working with the Armory Show on VIP swaps and shuttle buses to bring art collectors to each others’ doors.” At Collective, they will find art galleries displaying works that might be considered design, and vice versa. “I’m interested in blurring the boundaries,” Learner says.

Visitors arriving at Collective will enter through Intermediate States II, a new installation made largely of handmade, amber-hued fiberglass by Kristen Wentrcek and Andrew Zebulon Williams, the Brooklyn design duo behind Wintercheck Factory. Inside, the VIP lounge will be outfitted with glass-block and stone furniture by Eleni Petaloti and Leonidas Trampoukis, of LOT Office for Architecture and its sibling design studio, Objects of Common Interest. New York designer Carlton DeWoody and his firm, Reunion Goods & Services, have designed Collective’s café around a pre-cell-phone, 1970s-era sociability. “The heart of the café will be a modern take on the conversation pit, which we consider one of the lost staples of the mid-century interior,” says Reunion Goods & Services principal Laura Flam. “In an age when most people go online to shop and see new things, it is even more important to create spaces that inspire people to participate.”

Here, 11 particularly noteworthy galleries and designers among those that will be at Collective this year: 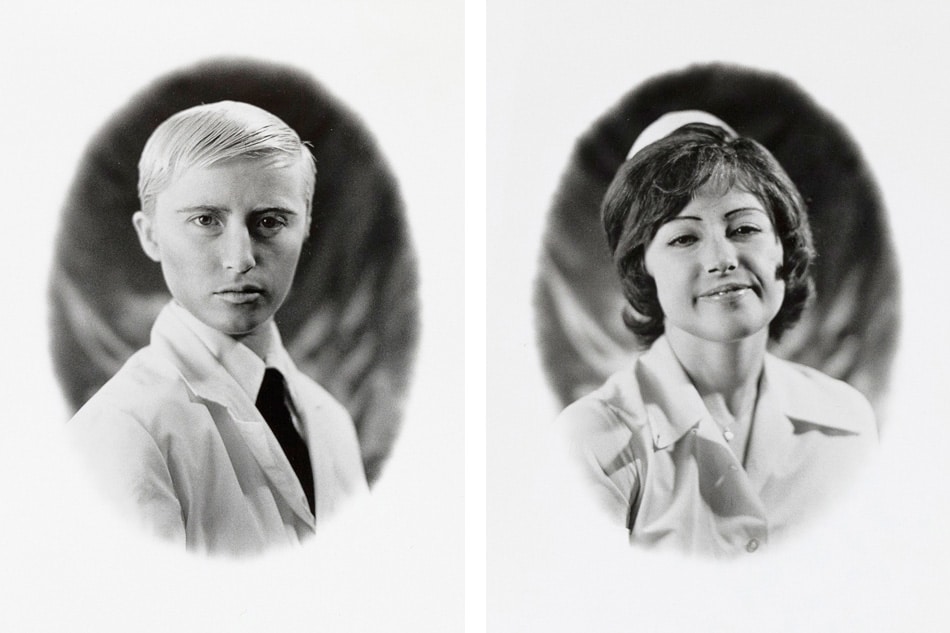 Toronto’s Caviar20, a gallery that spans the art-design divide, will show pieces by women artists who came to prominence in the 1980s, including Nan Goldin, Barbara Kruger, Jenny Holzer and Cindy Sherman, whose Doctor and Nurse, 1980–87 is seen above. Founder Troy Seidman says their work from that period established “signature aesthetics that were unprecedented and iconic” and is “rich with themes that are as relevant today as they were thirty years ago.” The art will be shown along with dramatic wall coverings by the Toronto studio Moss and Lam. Photo courtesy of Caviar20 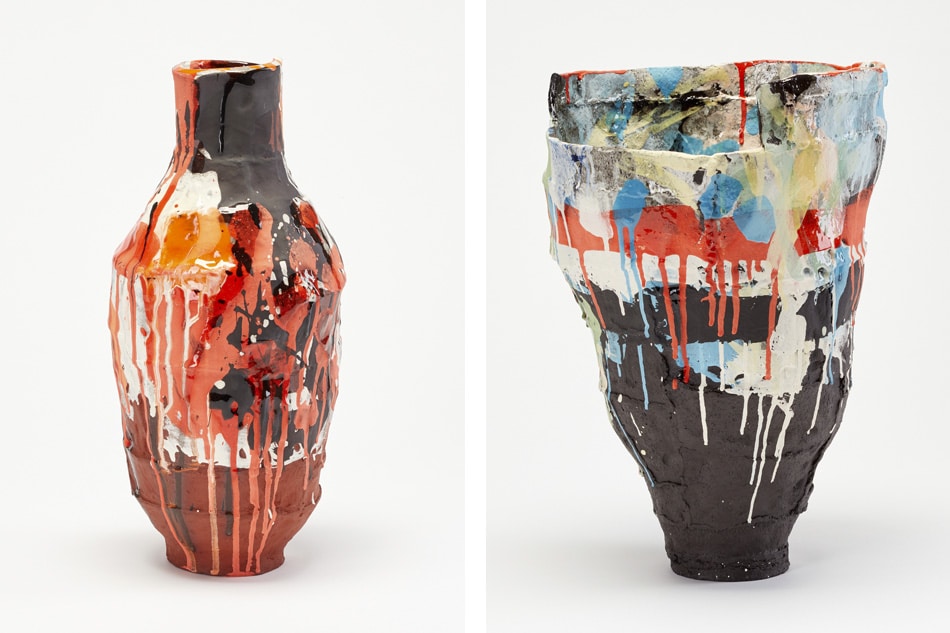 Mindy Solomon Gallery will be coming from Miami with pieces by Elke Sada. According to owner Solomon, the Leipzig, Germany–based ceramist “fully embraces the maddening versatility of clay.” The pieces — like Morinellus, above left, and Luscina Svecica, above right — take their inspiration from ancient copper vessels and are “replete with painterly brushstrokes, creating powerful fields of color,” the gallerist says. “Drops fall from the brush. Scratches run along rough surfaces. Lines formed by shape and color lead the eye up and down and around.” Photos courtesy of Mindy Solomon Gallery 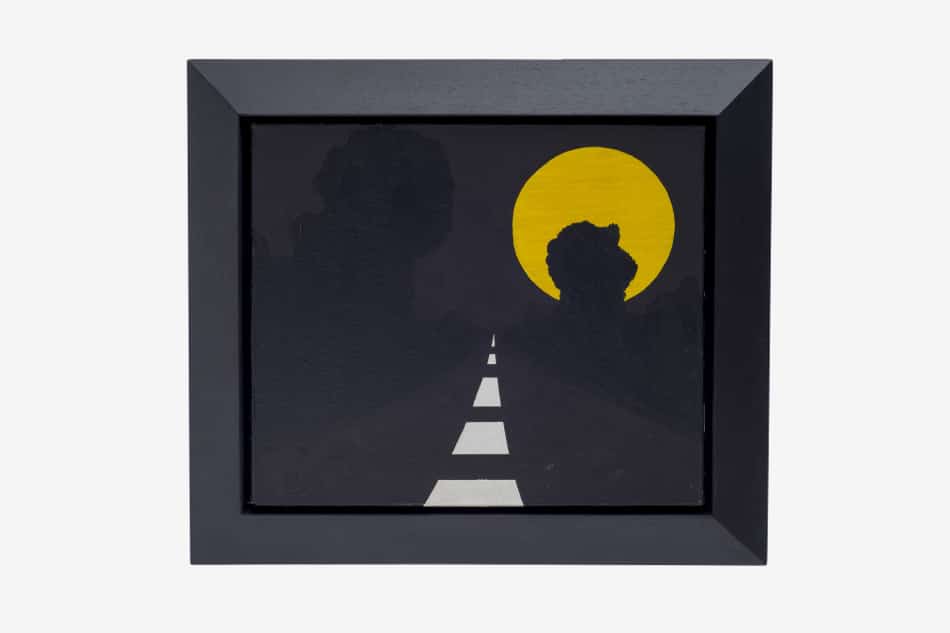 “I’m focused on artists who are no longer in the limelight or were never in it,” says James Elkind, the owner of Manhattan’s Lost City Arts. Those artists include Allan D’Arcangelo, who is best ​known for his ​minimalist ​paintings of road signs and highways, like 1963’s Moon, seen above​. His compositions owe a debt to Charles Sheeler, but their flatness channels ​Pop artists like ​Andy Warhol and Robert Indiana. Photo courtesy of Lost City Arts 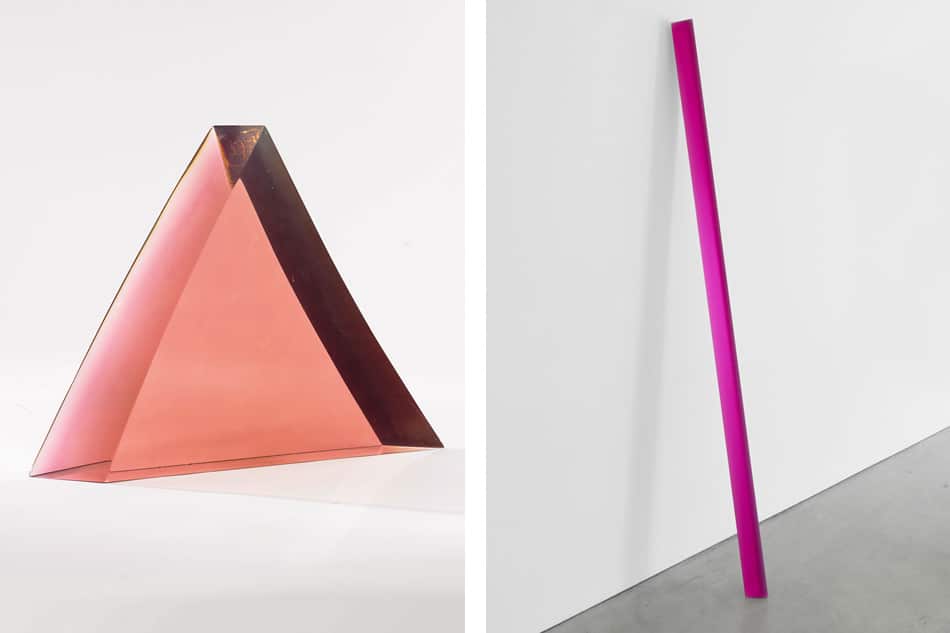 Peter Blake, of the self-named Los Angeles gallery, a newcomer to Collective, will be showing works by such California Light and Space Movement artists as Lita Albuquerque; De Wain Valentine, whose untitled 1970 work is above left; and Peter Alexander, whose Pink Leaner, 2015, is above right. Joining these will be vintage furniture by Vladimir Kagan (an original Serpentine sofa, circa 1950), Jorge Zalszupin (a Petalas coffee table, 1960s) and Jean-Pierre Laporte (an Esox chair from the 1970s). Photos courtesy of Peter Blake 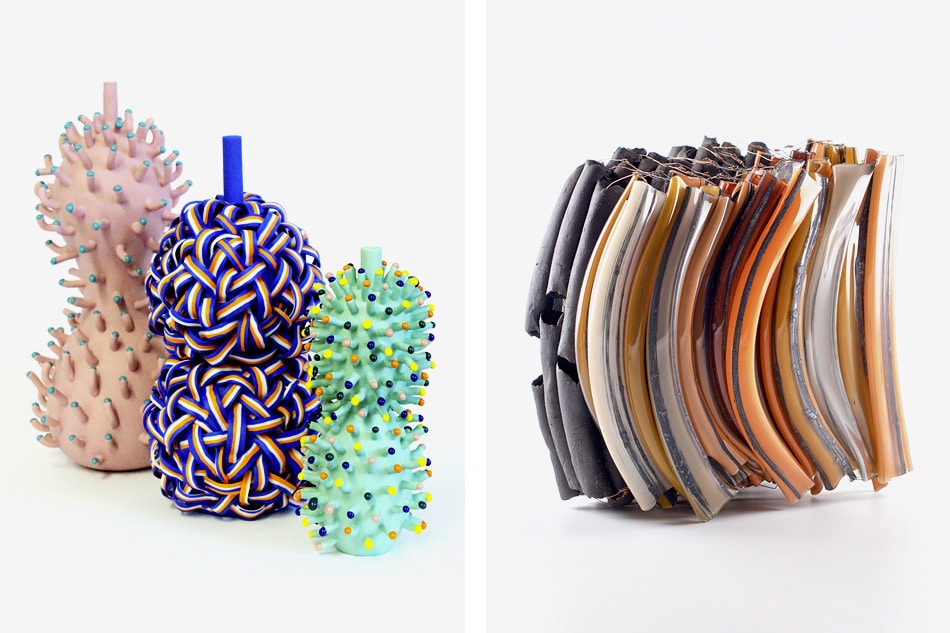 J. Lohmann Gallery will be bringing contemporary ceramic, glass and metal works, including new pieces by the emerging South Korean designers Bae Sejin and Sangwoo Kim, as well as Ahryun Lee (above left), whose ceramic vessels are being shown in the U.S. for the first time. Also making their American debut are pieces by glass artist Ida Wieth (above right), who hails from Denmark. Among the more established artists in the New York gallery’s mix are the Danish-born, U.K.-based Merete Rasmussen, who will present a brand-new body of work in forged and wrought copper; and the Italian-born, Denmark-based ceramist Sandra Davolio. Photos courtesy of J. Lohmann Gallery 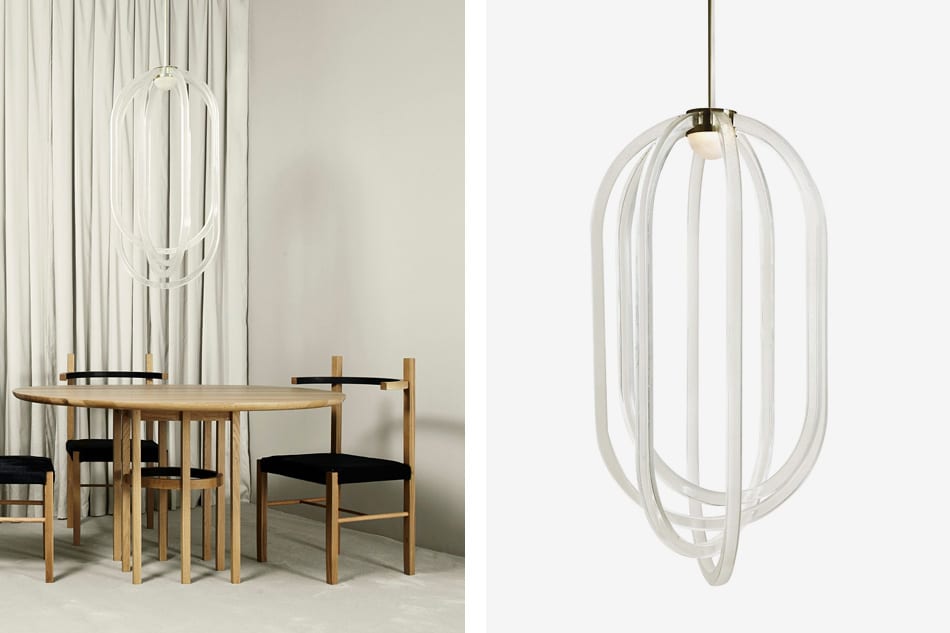 Coil + Drift, the New York–based maker of contemporary furniture (all designed by founder John Sorensen-Jolink), will be showing its brass and cast-resin Cirrus chandelier (above right); its brass floor lamps inspired by the city’s famous Bishop’s Crook lampposts; its Soren chair, whose back takes the form of a dramatically poised parenthesis lined with black leather; and the complementary eight-legged Soren dining table (above left); as well as three new pieces. Photos courtesy of Coil + Drift 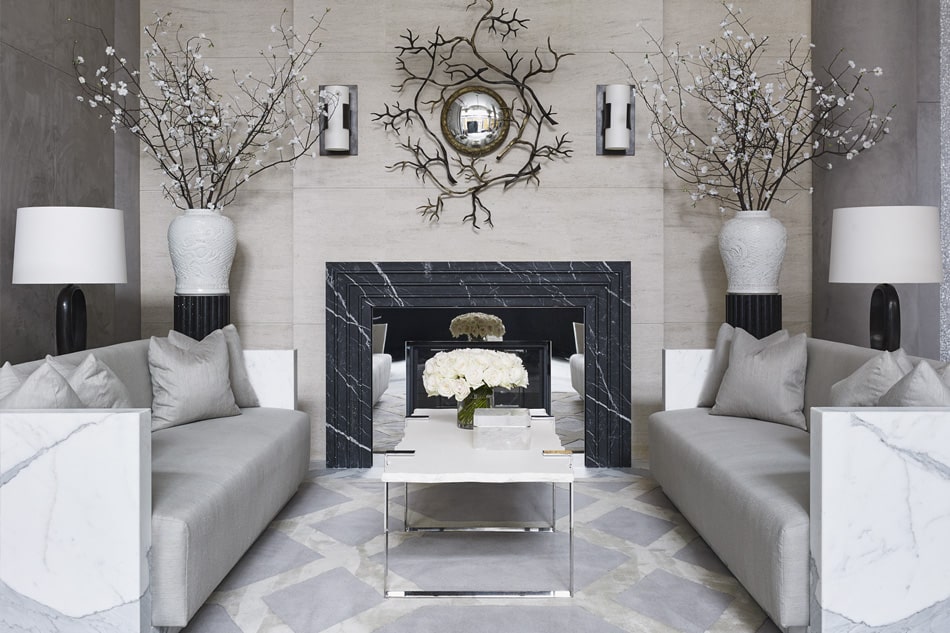 Ryan Korban, the luxe minimalist designer who has created stores for Alexander Wang and Balenciaga, among others, will display a pair of sofas made of statuary marble, a coffee table of slab French limestone and console tables of parchment and bone against a backdrop of terrazzo flooring and suede wall covering, all designed for the interiors of a new condo building, one of which is seen above, at 40 Bleecker Street in NoHo. Photo courtesy of Ryan Korban 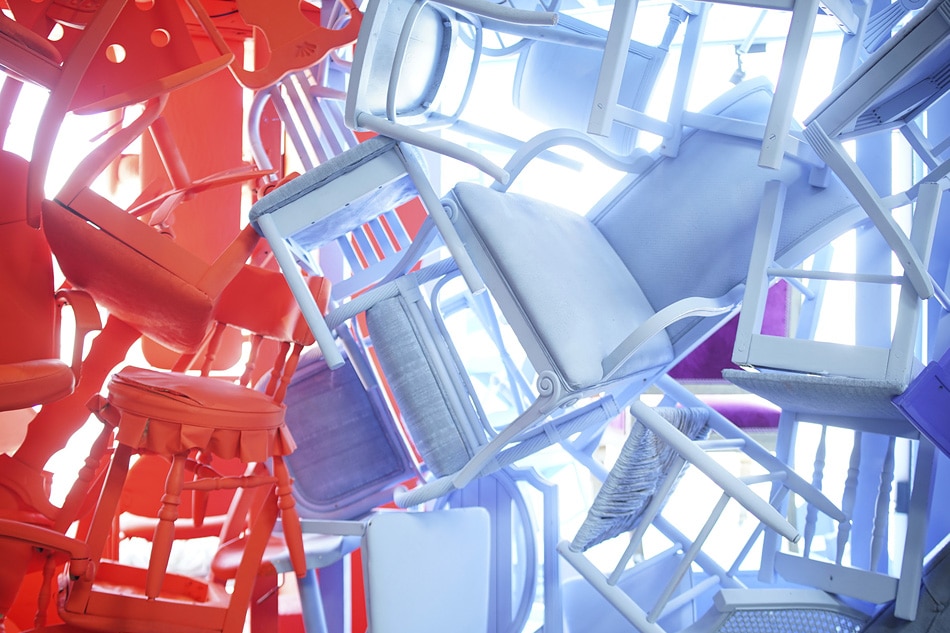 For a new initiative called Collective POV, visionary Los Angeles interior designer Jamie Bush is doing an installation titled Sit, above, which juxtaposes what he calls a “sculpture pile” of generic chairs (plus poster-sized photos of similar piles) with a selection of important seats displayed on pedestals. One goal, Bush says, is to explore “what constitutes value in a world of disposable consumption.” Photo courtesy of Jamie Bush

Sam Stewart is a New Yorker whose work has been inspired by the look of films like Beetlejuice, the palette of Fisher-Price toys and the distorting effects of Google SketchUp. For Fort Gansevoort, a Manhattan gallery, he has created a surreal home gym — a rendering of which can be seen above — with furniture made of MDF, burled maple and velvet flocking and barbells seemingly collapsing under their own weight. Photo by Sam Stewart, courtesy of Fort Gansevoort 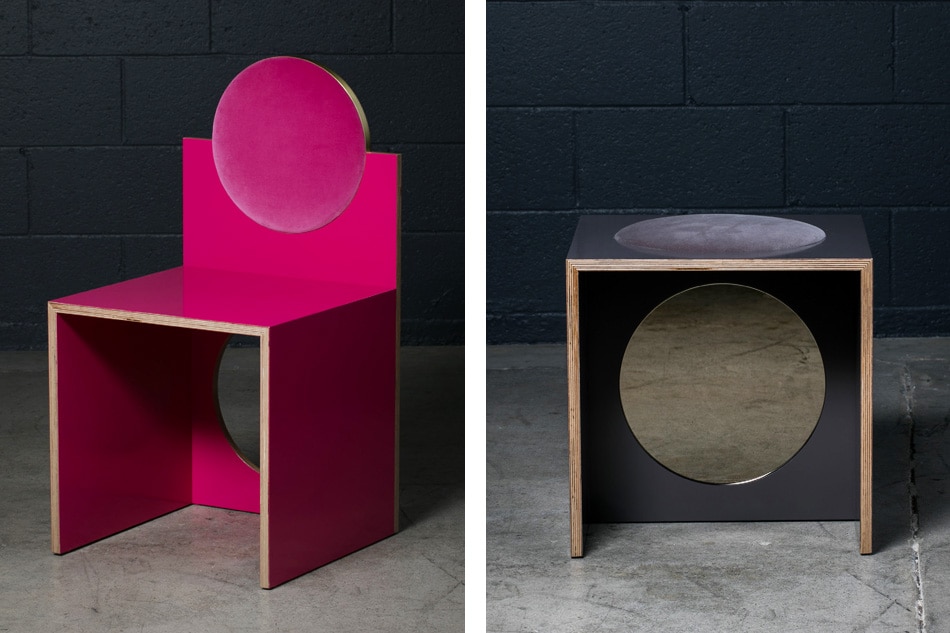 Azadeh Shladovsky Studio will feature new work in Shladovsky’s Qualia collection, which explores the importance of touch in visual processing. A one-of-a-kind solid marble table with raised dots spelling out a poem by Shladovsky in braille will be the booth’s centerpiece. Older pieces by the Los Angeles designer — such as the plywood, brass and velvet Void chair (above left), which will be presented in new colors, and the Solo stool (above right) — will also be in the booth. A film titled Qualia, made in collaboration with the British artist Alexander James, will be projected on the installation’s back wall. Photo courtesy of Azadeh Shladovsky Studio 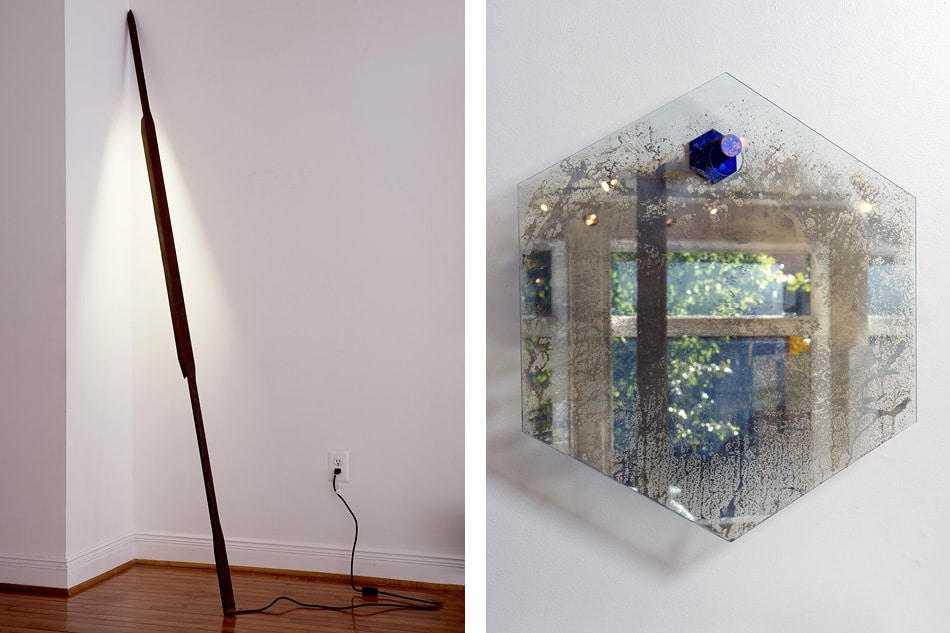 The Philadelphia-based Wexler Gallery, which celebrates design innovation as well as aesthetics, will be debuting new work by the Paris studio HAROW; Brooklyn’s Eric Slayton, whose Harpoon floor light is above left; Philadelphia’s Gregory Nangle, whose Ernst mirror is above right; and Icelandic creator Gulla Jonsdottir, who will show her burnished-brass Puzzle table. Wexler will also display ceramic pieces by artists Roberto Lugo and Peter Pincus and a large multimedia work by Robert Rauschenberg. “The fair draws a sophisticated mix of savvy collectors and design professionals,” says gallery owner Sherri Wexler. “It’s a perfect venue for us to showcase new work by our talented roster of artists and designers, as well as fresh works of contemporary fine art.” Photos courtesy of Wexler Gallery