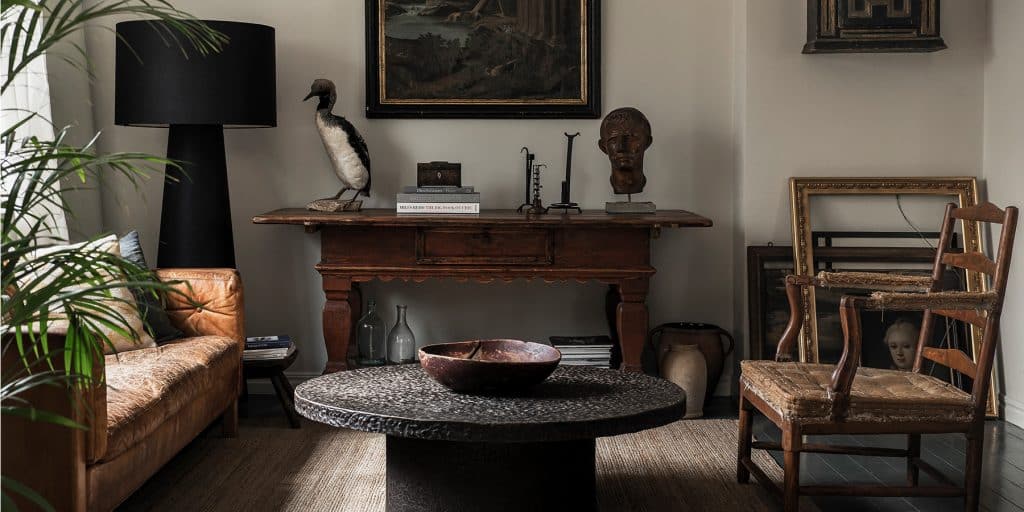 Daniel and Cristina Larsson left careers in the travel industry to pursue their passion for 18th- and 19th-century treasures.

November 20, 2019In the nine years since they founded D. Larsson Interior and Antikhandel, Daniel and Cristina Larsson have become among the world’s leading purveyors of 18th- and 19th-century painted Swedish antiques. Yet just 12 years ago, they were both on very different paths. 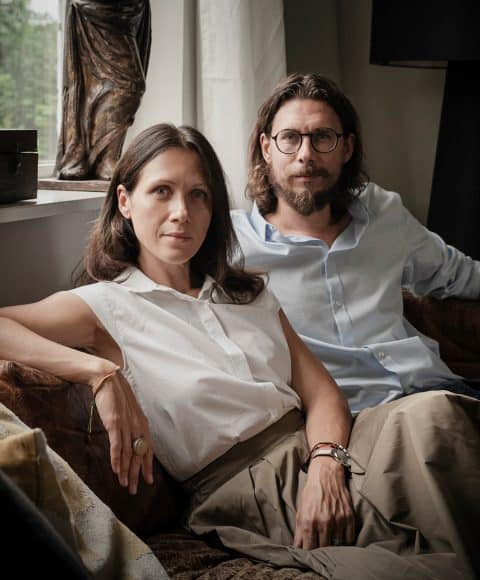 Married couple Cristina and Daniel Larsson, of D. Larsson Interior and Antikhandel, specialize in 18th- and 19th-century Swedish antiques, which they mix with vintage and modern pieces in their own home. Top: Their living room features an 18th-century Swedish Baroque table, a 1970s coffee table and a ca. 1775 Gripsholm armchair. All photos by Francisco Caires

Swedish-born Daniel was in Amsterdam working in customer relations for KLM airlines and dealing in vintage modern furnishings on the side. This was a hobby he picked up while living in Stockholm. Finding inexpensive pieces at Swedish flea markets, he would finish them himself — “Woodshop was my best subject at school,” he says with a laugh — and then drive to England to sell them at the country’s open-air antiques markets to British and American dealers.

Cristina was also in Amsterdam with a job in the travel industry. Born and raised on Madeira, she had left the Portuguese island seeking a complete break from her family’s lines of business. Her grandfather was a highly respected dealer in antique Portuguese and English furnishings and objects — “The whole brown and mahogany thing,” she quips. Her mother was an interior designer, and her father an architect.

The old and rare did interest her. In fact, she’s fascinated by archeology and has a doctorate in museology. But she wanted to follow her own path. As fate would have it, that path led to Daniel, and gradually the prospect of becoming a dealer became more compelling. On selling trips to England, the young couple looked at what other dealers were doing and saw that there was a tremendous potential for a business trading in Swedish antiques from the 18th and 19th centuries. 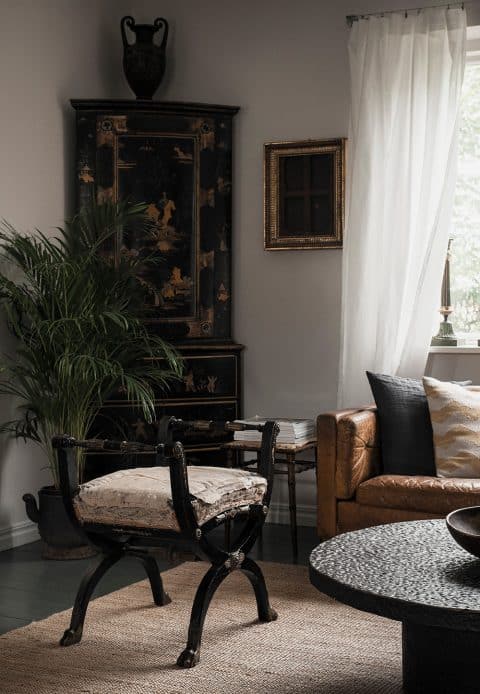 Also in the living room is a ca. 1750 Swedish Baroque corner cabinet with Chinese motifs in gold and silver leaf.

When they married, in 2008, they debated whether to move to Portugal or Sweden. They were keen on having children and wanted to be close to one set of grandparents. Since Portugal’s economy was on life support, it wasn’t much of a choice. And Cristina is the linguist of the two.

Which is why, today, they live in a century-old brick house in the countryside outside Helsingborg, on the southern Swedish coast, about an hour north of Copenhagen, with their eight-year-old daughter and five-year-old son. “Every day, we see animals — eagles and reindeer,” says Cristina, “and our two children can ride their bicycles wherever they please.” Adds Daniel, “It’s also a good location for sourcing the antiques we sell.” The couple market those finds on a storefront on 1stdibs, as well as in their showroom in Höganäs, a city on the southern Swedish coast.

Their house doubles as a kind of antiques design lab and photography studio. The couple styles domestic vignettes with furnishings from their inventory, and Daniel takes photos of them to display online and demonstrate how livable these antiques are. They believe it is his spare, poetic images, worthy of a shelter magazine, that have helped them stand out — that and, of course, antiques of the highest quality and interest. 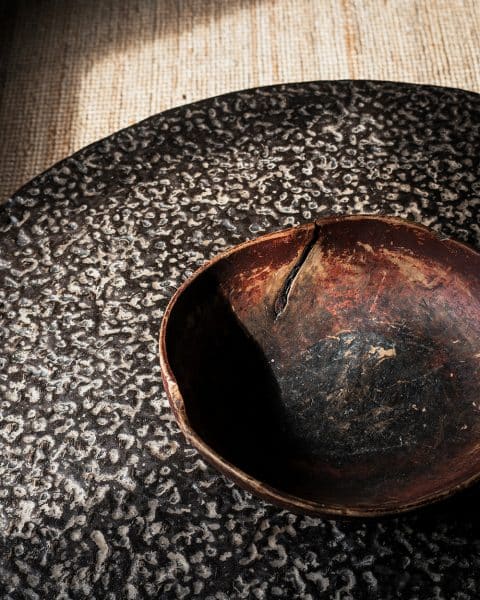 The 1970s coffee table is topped with a root bowl, a Swedish folk piece carved, as the name implies, from the root of a tree.

You’ve deftly combined modern and antique pieces in your living room. Can you tell us about the furnishings?

Cristina: My parents had antiques in their house but also a lot of modern and mid-century. I always liked the mix, so we’ve done a bit of that here. The sofa is a nineteen sixties Danish modern piece, the coffee table is from the 1970s, and the floor lamp is by Dutch designer Marcel Wanders. Within this modern environment, we’ve placed a table from the seventeen thirties against the wall to serve as a console.

Daniel: These Baroque tables are typically Swedish. They were used in the kitchen for meal preparation. Judging from the quality of detail, this one probably came from a mansion. The color is original, and because of the skirting on all four sides, it can also work as a center table.

Cristina:  On the wall above is an eighteenth-century capriccio of an Italian landscape, which we think works quite well with the other pieces. The armchair dates, we think, from about 1775.

Daniel: The color and padding on that chair are original. That style is known as a Gripsholm, after the castle with that name that was a favorite residence of King Gustave III. When he furnished it, he commissioned chairs like this one to outfit the bedrooms.

What’s that interesting bowl on the coffee table?

Cristina: That’s a root bowl, a Swedish folk piece. They used to carve these out of the root of a tree and use the bowls in the dairy or for food preparation. Some are painted, some naturally have good color. We think they are wonderful objects. This one we like so much we haven’t yet put it online to sell. That’s the thing about living with antiques — it’s hard to part sometimes. 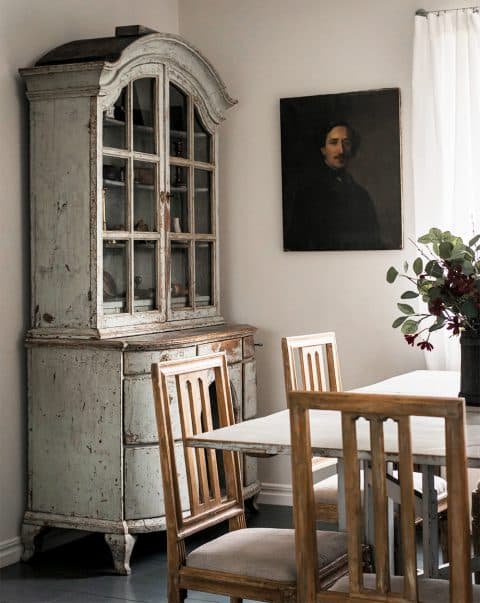 The dining area features a set of chairs by Carl Johan Wadstrom and a Gustavian drop-leaf table. The cabinet is a Swedish Rococo piece.

Is that chinoiserie corner cabinet Swedish?

Daniel: Yes, it’s a very rare mid-eighteenth-century piece that was made in Stockholm. We suspect it’s from a castle, but we can’t be sure. It does look very much like the one in the Chinese Pavilion at the royal residence at Drottningholm. The piece was restored and relacquered around 1830, a common practice back then. I’d call it outstanding in terms of its craftsmanship and the decorative painting in gold and silver leaf.

Cristina: That’s something we started to like the more that we lived with it. In the beginning, we thought it was just too much.

The banquette in front of it is quite handsome.

Daniel: That’s purely ours. It’s a fantastic thing, with lion paws for the feet. It’s the largest one we’ve ever seen. Usually, they are quite petite. This one has the original padding and the great black color. But it’s only one, and people usually like pairs. We are definitely saving it for reproduction. 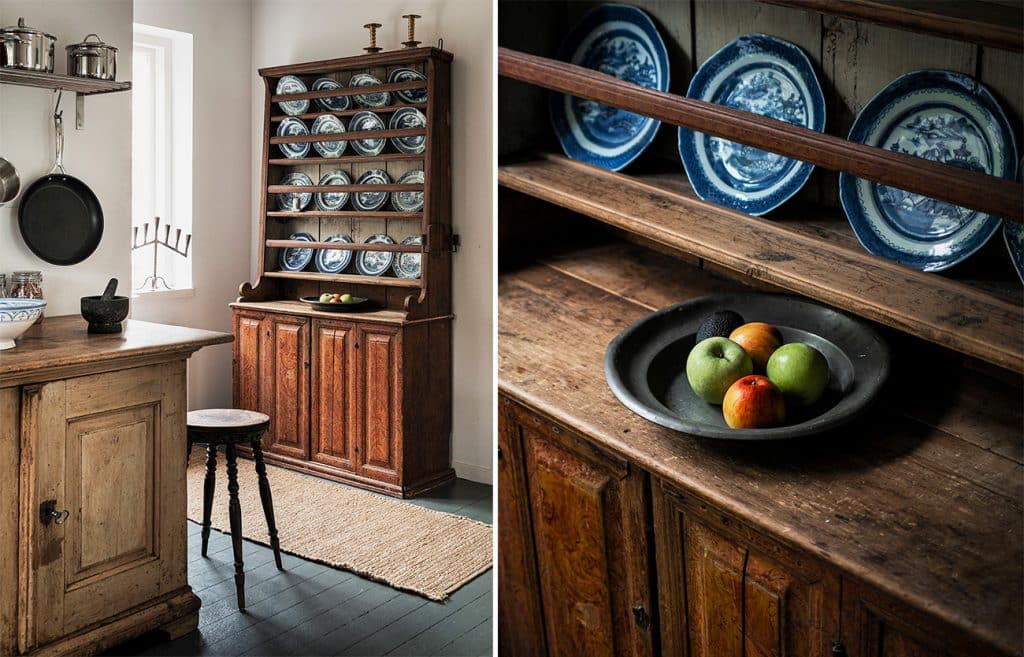 Daniel: Yes, Larsson & Berg. Often, we spend years searching for a special piece, like a pair of Swedish barrel-back armchairs that might cost twenty-five thousand dollars to buy, and then the interior designer asks, “Do you have six?”

Cristina: We’re also doing it because we don’t want to part with certain items. We want to sell, but we also want to keep. This venture is very new for us. We’ve done it all with our own money.

Daniel: We are learning as we go. It’s very creative, and so far we have three Gustavian chair styles, all based on very important pieces in our collection. 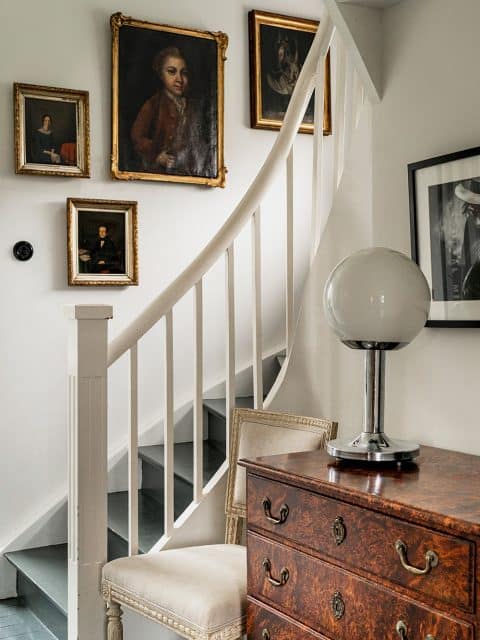 In the hallway is an 18th-century Baroque commode with an alder-root veneer. Among the artworks along the stairway is a ca. 1770 portrait of a boy signed A. Eklund.

The dining room has a handsome cabinet that’s painted a pretty shade of gray. What’s its story? And tell us, too, about the austere dining table and chairs.

Daniel: That cabinet is a Swedish Rococo piece and part of our private collection. People had cabinets like this one in their homes to show off their porcelain collections. It’s in fantastic shape. The paint is original. That color is called Gustavian gray, but originally it was painted white. It aged gray over time.

The dining table is in remarkable shape. It’s an unusually large Gustavian drop leaf, and because of its size, we can be fairly certain it came from a country manor house. It has its original paint, which is now gray with a touch of blue, with only a few minor retouches. The presence of blue may have to do with the different pigments used at the time, as they can age differently.

But blue was used in painted Gustavian furniture. It was reserved for slightly finer pieces, because it was more expensive. It is possible, though, they mixed a little blue pigment into the paint to make the color more appealing. We think it was made around 1790.

The dining chairs are really special. They were made by the master chairmaker Carl Johan Wadstrom, who was based in Stockholm. 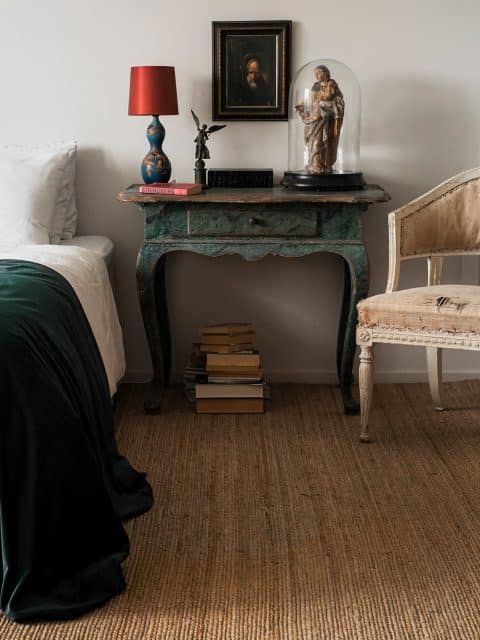 This bedroom includes a 19th-century Gustavian barrel-back armchair (one of a pair). The couple has started another venture, Larsson & Berg, which reproduces classic Swedish furniture and currently offers three Gustavian chair styles.

They are simple, yet so elegant.

Daniel: It’s all about the proportions. If you get those right, you don’t need a lot of carving. And that’s typical of furniture made in the capital city, where many of the carpenters were appointed by the king.

Cristina: They have a “less is more” feel, which is why I have become so addicted to Swedish antiques. It’s the cultural mentality. It’s quite sober. Of course, the pieces from the countryside are more naive, even the pieces owned by aristocrats.

In the kitchen, you have a more rustic-looking storage cabinet. Is that a country piece?

Daniel: Yes, that’s an early-nineteenth-century folk piece with a great patinated surface. It’s charming. The stool is also a folk piece, probably dating from 1790, with good transitional Rococo and Gustavian carvings. And across from it is a Swedish Baroque buffet. Inside, are nine numbered drawers — a very fine piece.

You have a fantastic-looking commode in the hallway that appears almost English. Can you tell us about it? It looks like it has a burl veneer.

Daniel: You’re right, that’s a fantastic piece. It was inspired by the English — it’s in the Georgian style, but it’s Swedish Baroque. The veneer is not burl, but alder root. I like it a lot. 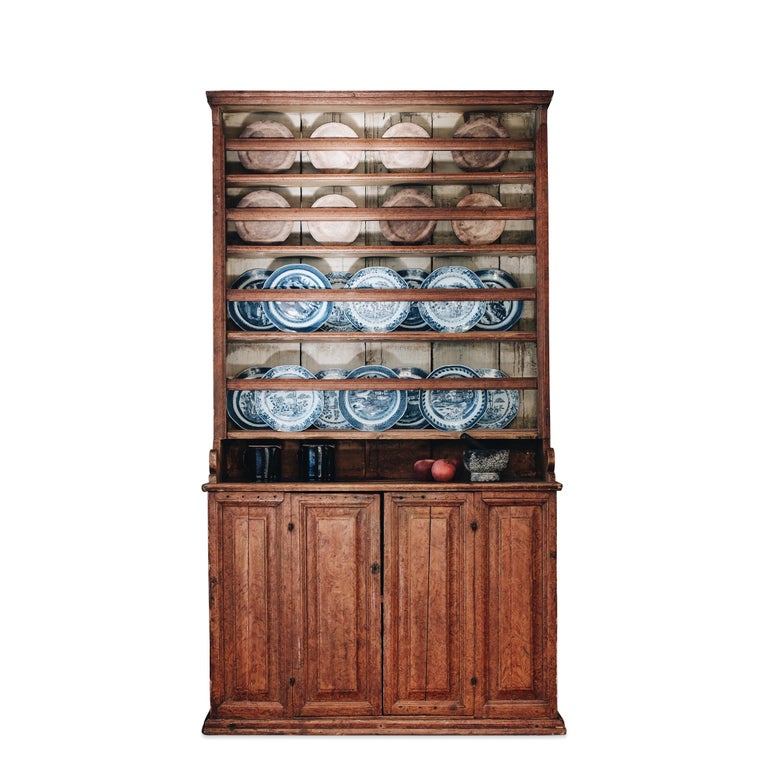 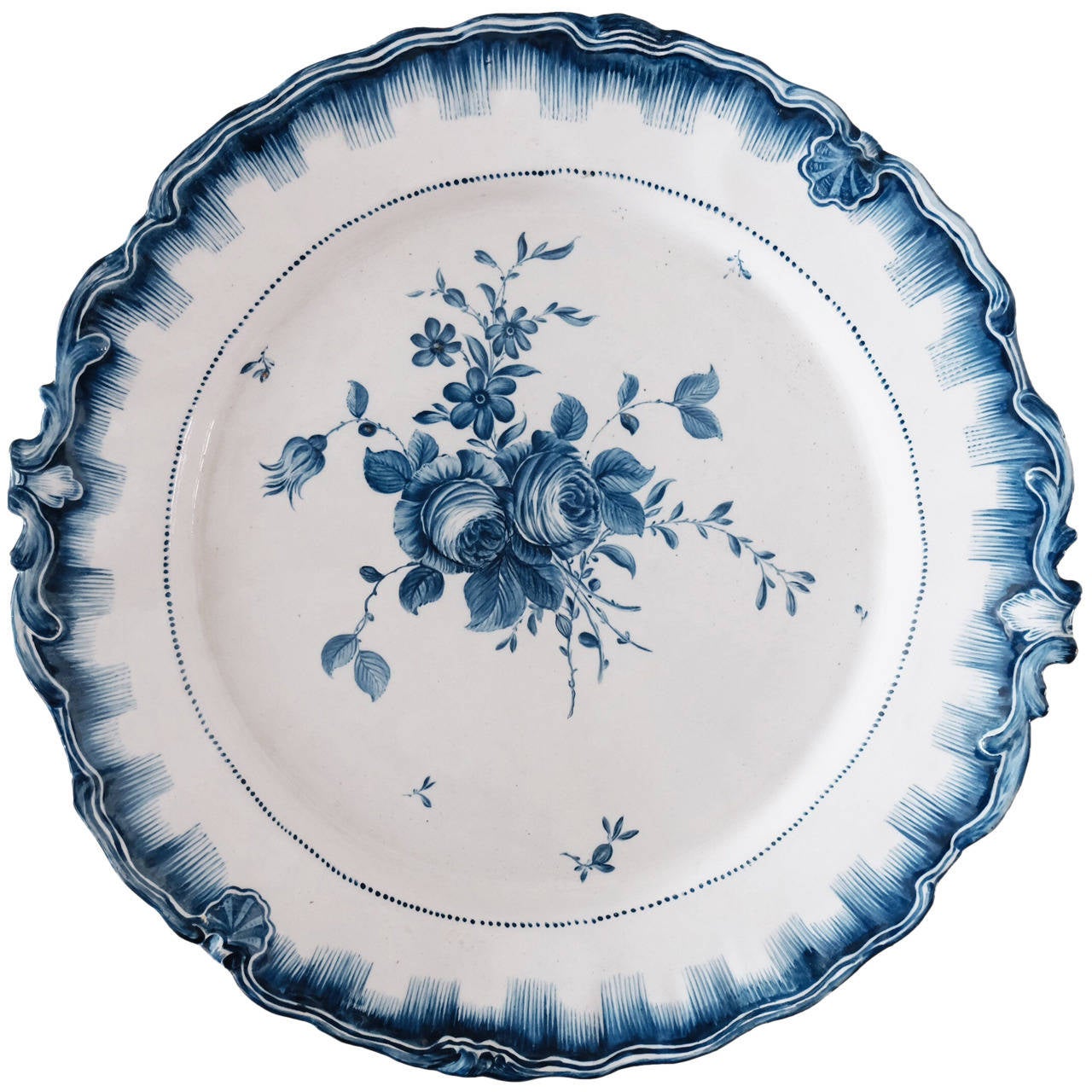 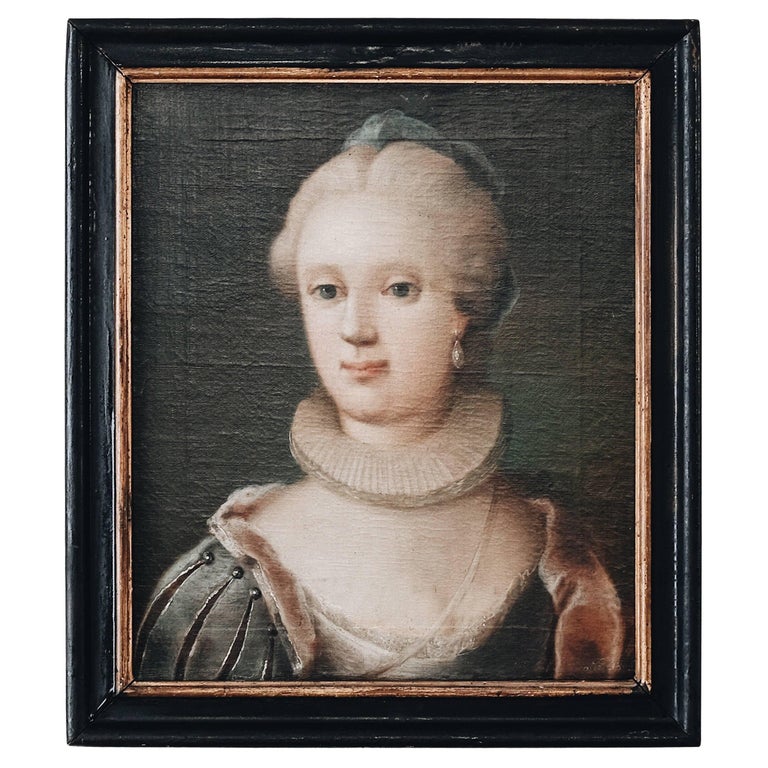 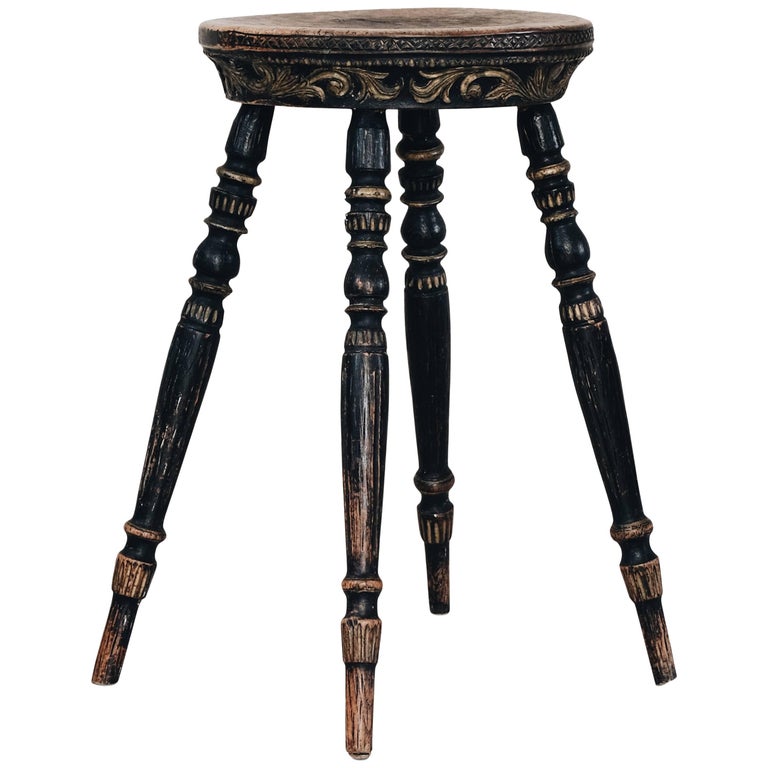 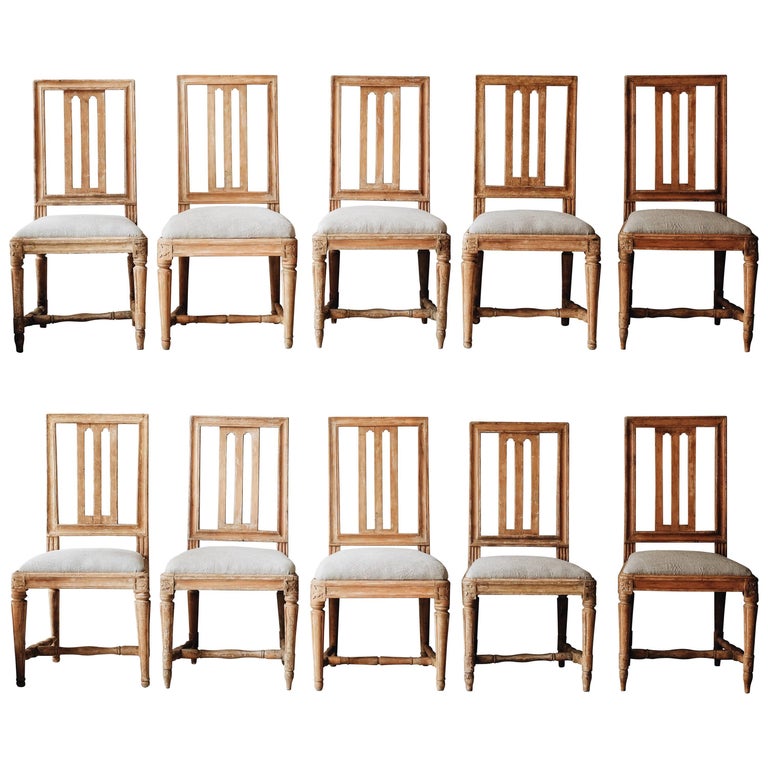 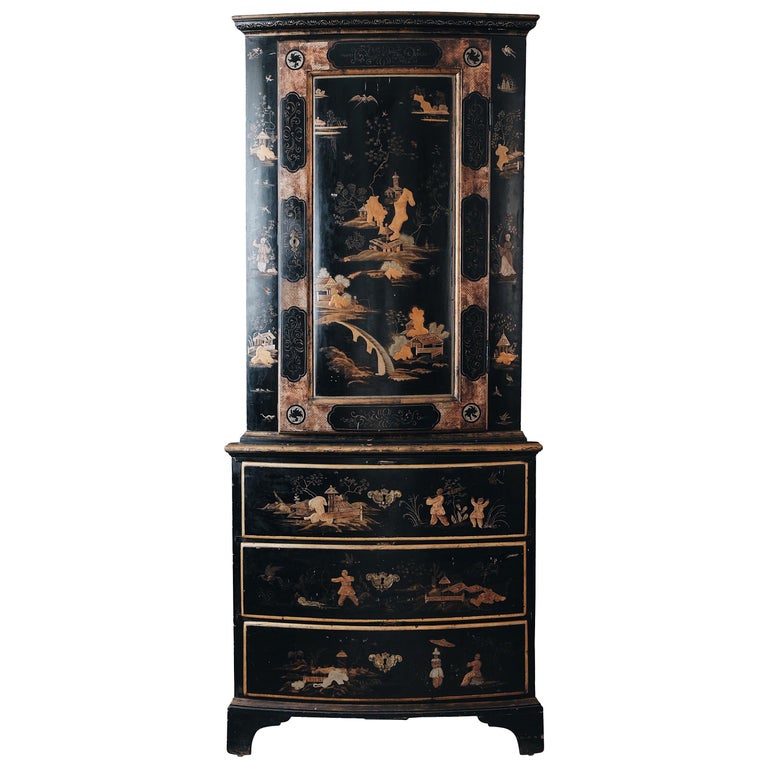 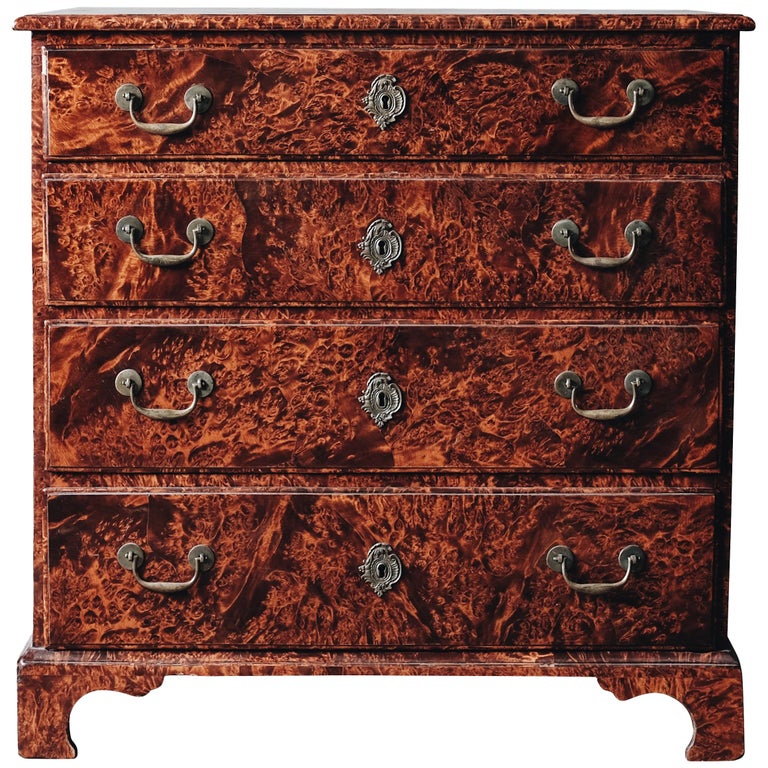 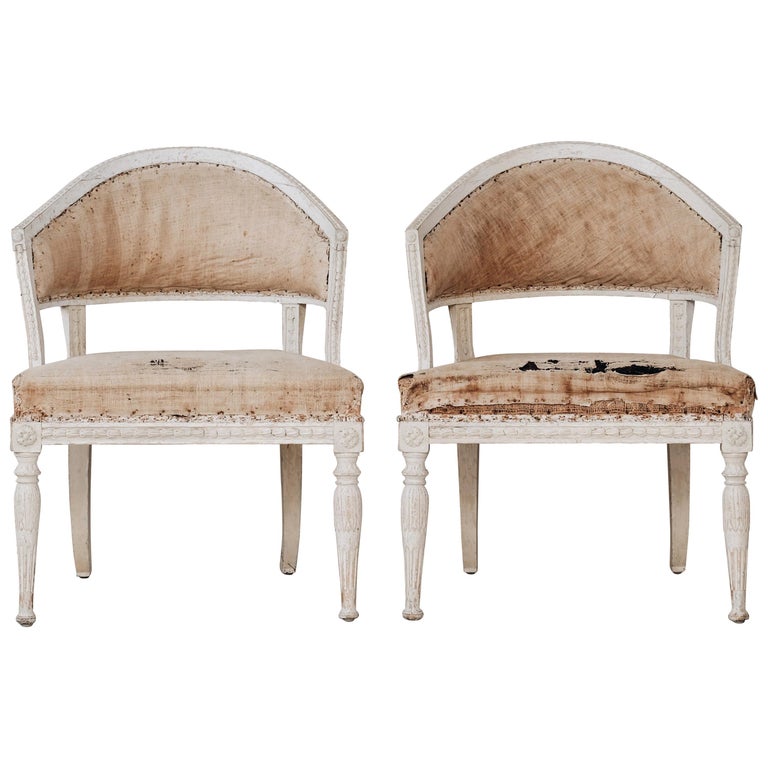 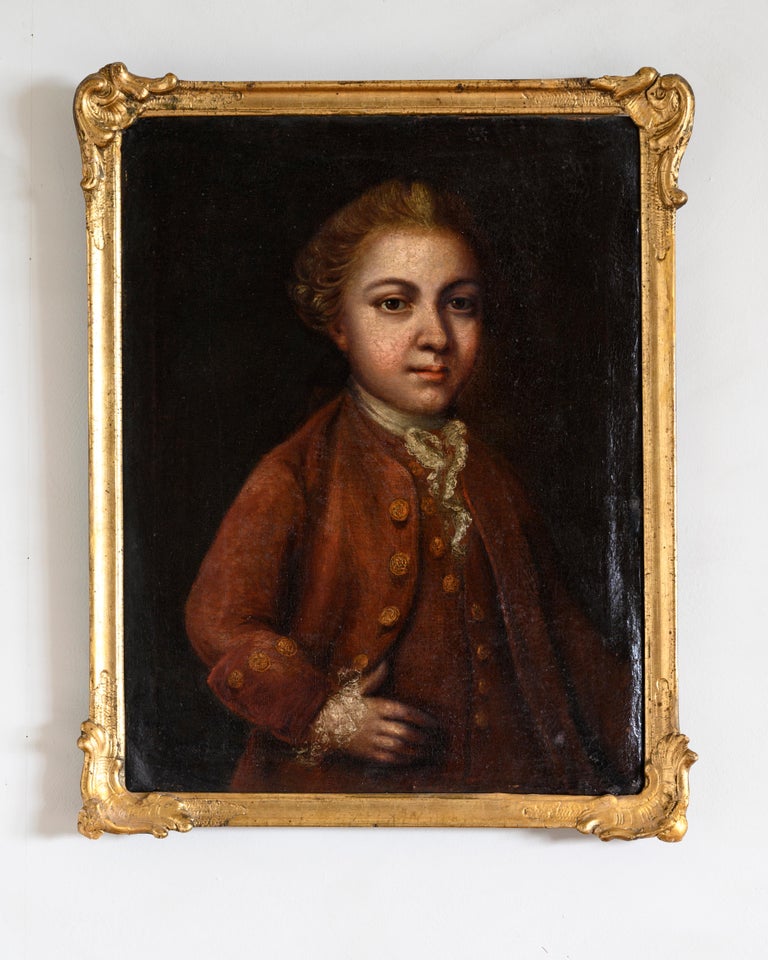