After 127 Years, Schumacher Is Still Keeping It Fresh 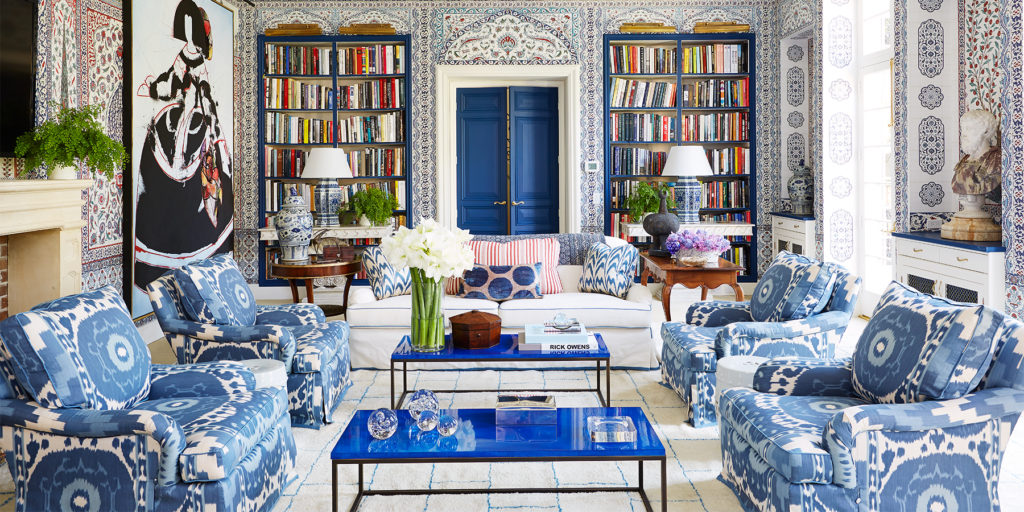 The idea of youthful fabrics and wallcoverings is no contradiction when the company is Schumacher and its creative director is Dara Caponigro. 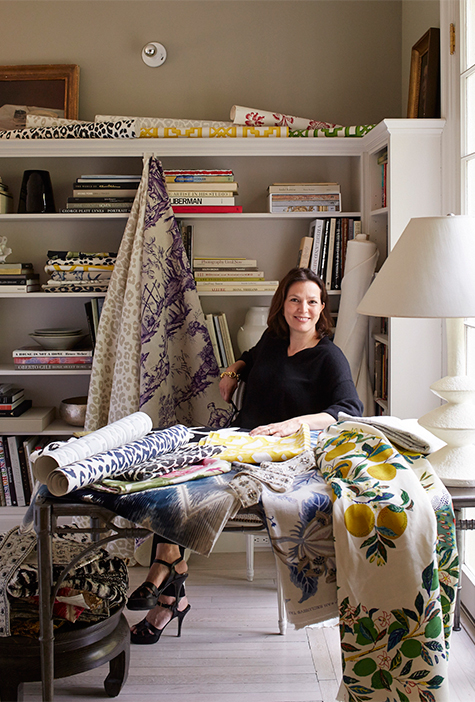 November 14, 2016Since becoming creative director of  F. Schumacher & Co., in 2013, former Veranda editor in chief Dara Caponigro has introduced new patterns and designers to the venerable textile house and dipped into the archives to modernize prints from eras past (photo by Max Kim-Bee). Top: In a Houston family room, interior decorator — and recent Schumacher guest designer —  Miles Redd made characteristically bold use of the company’s Samarkind Ikat (photo by Thomas Loof).

How do you uphold the traditions of one of the world’s most esteemed fabric and wallpaper companies while moving boldly forward into the future? Easily, in the case of F. Schumacher & Co., the secret of whose success — the reason it’s a household name — is  its ability to roll with the times. Just ask Dara Caponigro, the company’s creative director since 2013. “Since Frederic Schumacher started the company, in 1889, he always had his finger on the pulse and was always adapting,” she says. “That’s why we’re still thriving after one hundred and twenty-seven years.”

The most recent example of the company’s forward-thinking approach is its collaboration with Cabana, the luxe biannual interiors journal masterminded by Italian style maven Martina Mondadori Sartogo. For the fabric-sheathed current issue, which is being celebrated with a 1stdibs pop-up shop featuring products inspired by its pages, Schumacher provided swatches in five classic patterns: Lotus Garden, Pearl River, Zanzibar, Chiang Mai Dragon and Indian Arbre. “We had been looking for a very special advertising venue,” says Caponigro. “The planets aligned, and there was Cabana! We had to do it. Our brands are so in sync, both celebrating the importance of pattern and design in enriching our lives.”

Caponigro, whose purview includes product development, marketing and visual merchandising, feels what she calls an “incredible responsibility” toward the creative legacy of the company, which produced decor for Stanford White’s redesign of the White House in 1902 and Jackie Kennedy’s in 1962, for hallowed institutions like Radio City Music Hall and the Metropolitan Opera House and even for the sets of cultural touchstones like Gone with the Wind and I Love Lucy. On the other hand, Caponigro, a seasoned editor who headed the high-end interiors magazine Veranda, has been given tremendous freedom to experiment. “One of the things I love about Schumacher is that it has a history of looking to the past,” she says, “but it never gets stuck there.”

The new edition of the interiors magazine Cabana features covers in nine different Schumacher textiles, including Lotus Garden, Zanzibar and Indian Arbre. To celebration the issue, the shelter bible has launched a 1stdibs pop-up shop stocked with items inspired by its latest stories.

In the early 20th century, Schumacher expanded on its original offerings of brocades and damasks by working with the top designers of the day, including Dorothy Draper and Josef Frank, some of whose patterns are still in the company’s portfolio. In a similar move, Caponigro’s first big step when she came on board was to contract with the inimitable interior designer Miles Redd to produce a line of fabrics and wallpapers ranging from the boldly graphic to the prettily historic. She has since done the same with Redd protégé David Kaihoi, L.A’s glamour-queen Mary McDonald, London-based creative force David Oliver and Veere Grenney, another leading British interior designer.

“When I arrived, there was an opportunity to take things to the next level,” says Caponigro. Together with members of her creative team, she went through thousands of samples from the company’s archives. “It’s a treasure trove, as you can imagine,” she says. “We sat for months analyzing and editing, looking for what was still valid, what needed improving, where the holes were.”

As a result of the review, Schumacher brought out more solids and textures to coordinate with existing prints and tweaked colors. “There were beautiful patterns, like Persian Lancers,” a century-old print, “but because the colors were dated, people weren’t paying attention to them,” Caponigro says. Now in chic new colorways, Persian Lancers is “flying off the shelves.”

Caponigro’s responsibility for visual merchandising comports well with her shelter-magazine background (she also spent time at House Beautiful and Elle Decor) and that of others on her team, who have worked at at Domino and Architectural Digest. As Caponigro puts it, “We have editors’ instincts for setting trends and telling stories.” 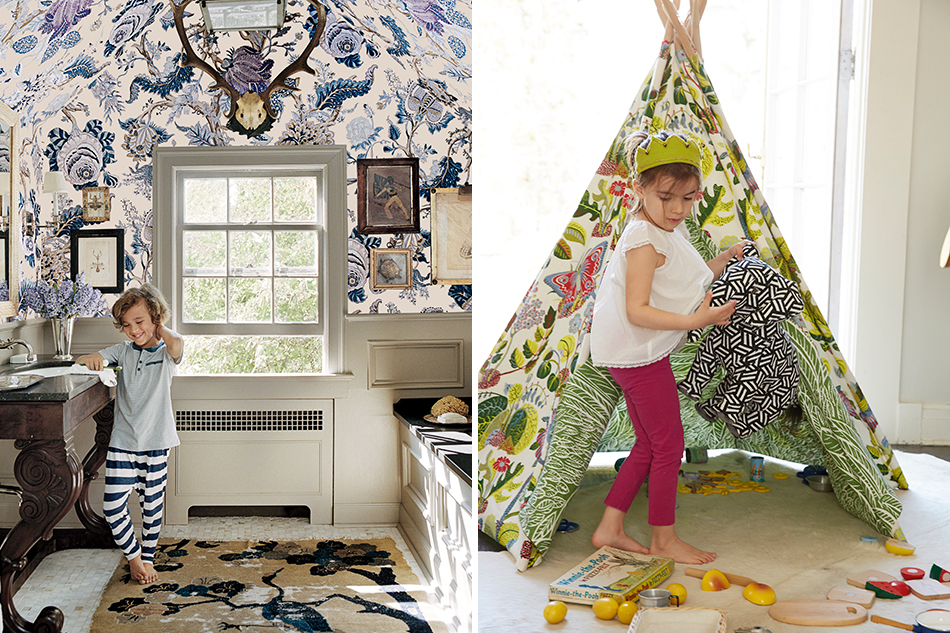 In a pair of recent Schumacher advertisements, the Indian Arbre pattern in hyacinth enlivens a bathroom (left, photo by François Halard), while the Exotic Butterfly print from the company’s Josef Frank Collection makes for a fun and inviting teepee in a child’s playroom (right, photo by Francesco Lagnese). 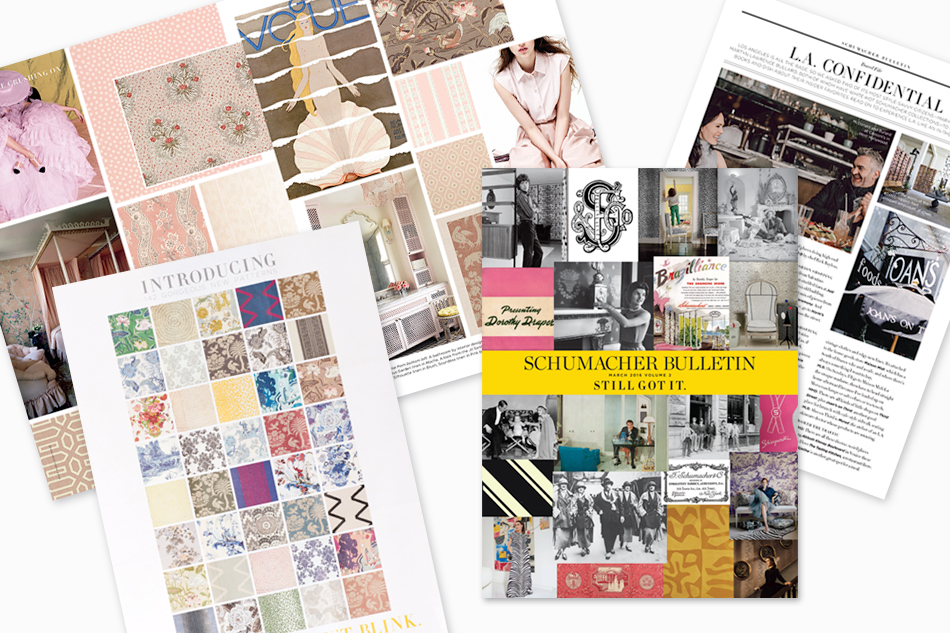 Caponigro’s purview as creative director extends to all of Schumacher’s touch points with customers, including the company’s website, social media presence and various pieces of marketing collateral — “everything from business cards to shopping bags to memo pads,” says Caponigro. 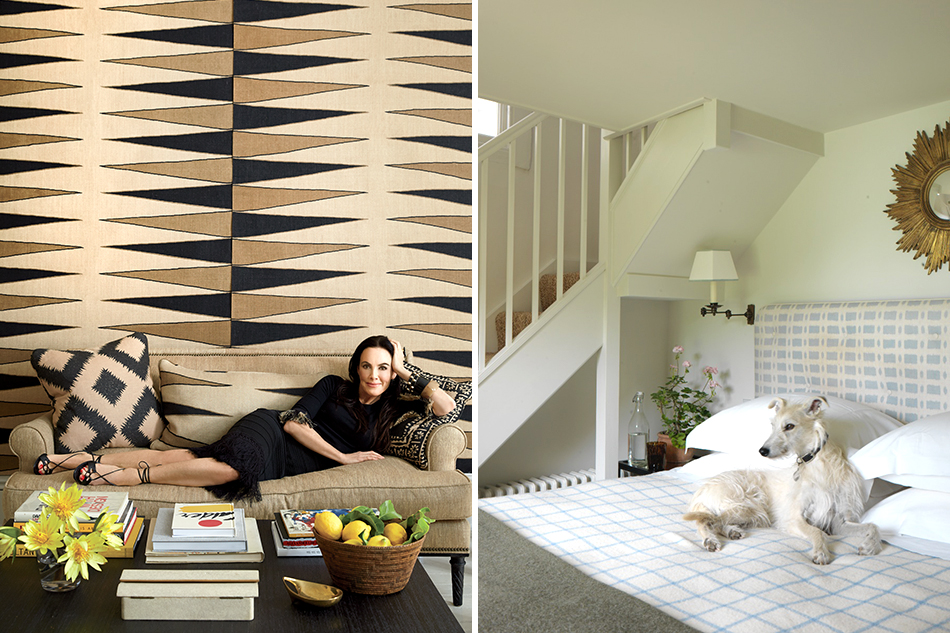 Left: Designer Mary McDonald‘s creations for the company include Moorea, on the walls and center pillow; Puka Diamond, on the left pillow; and Bora Bora, on the right pillow (photo by Melanie Acevedo). Right: One of Veere Grenney’s designs for Schumacher, Townline Road, covers the headboard in this bedroom at his English countryside home, helping to create a sense of monochrome calm (photo by David Oliver). 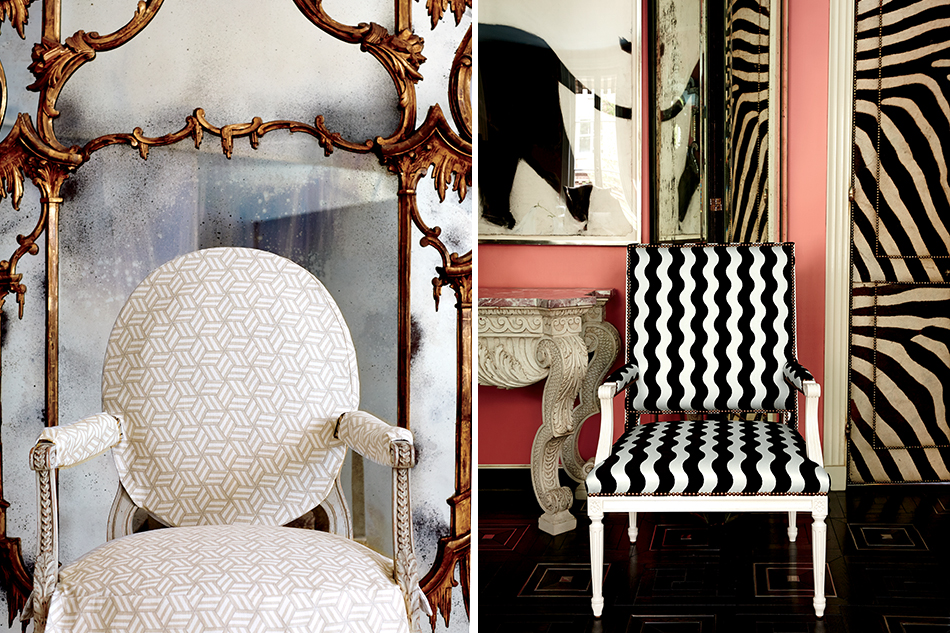 Redd’s 2015 collaboration with Schumacher resulted in these graphic Tumbling Block (left) and Wave prints, as well as more organic and even chinoiserie-inspired creations. Photos by Melanie Acevedo 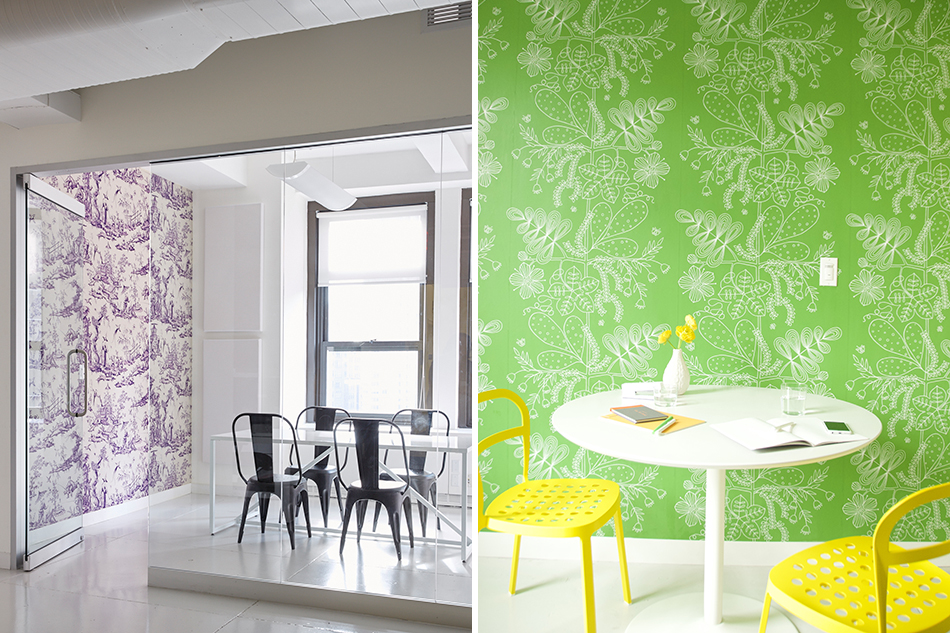 Left: In a Schumacher conference room, Shengyou Toile offers a glimpse of the Far East by way of France (photo by Francesco Lagnese). Right: A seating area at the Schumacher offices features the company’s Blommen pattern in the leaf colorway (photo by Olivia Caponigro, courtesy Schumacher) 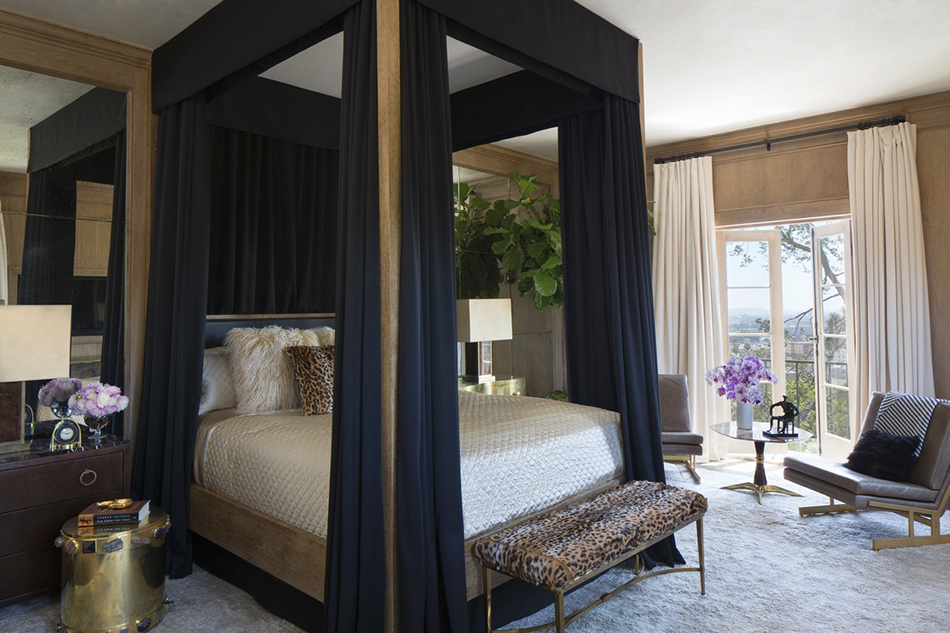 In the bedroom of a home in Los Angeles’s West Hollywood, designer Martyn Lawrence Bullard used Schumacher fabrics on the curtains of both the bed and the windows. For the latter, he selected the company’s Prestwick wool satin. Photo by Roger Davies /courtesy of Architectural Digest and Atelier Management 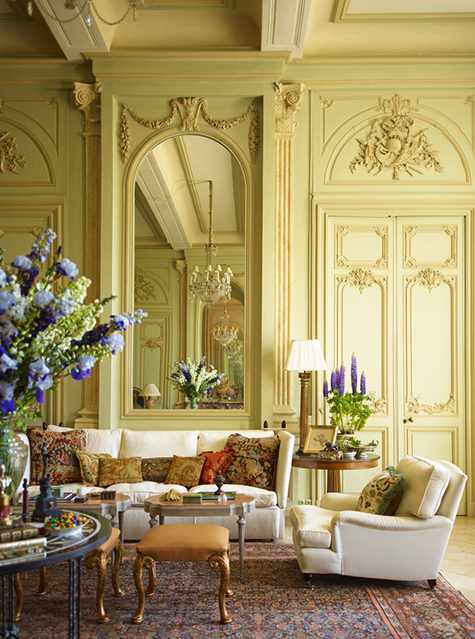 In the grand salon of the palatial home he restored in the Loire Valley, Los Angeles–based designer Timothy Corrigan used a Schumacher linen on an armchair and a damask from the company on the sofa. Photo by Eric Piasecki

Those instincts came in handy in redesigning the company’s website and “everything from business cards to shopping bags to memo pads” — all part of Caponigro’s mandate to improve what she calls “customer touch points” and to “give the brand a consistent voice.” The voice she created is engaging, fresh, punchy and fun to read. Accompanied by clear, bright graphics that announce that the company is unquestionably of the moment, it can be heard throughout Schumacher’s social-media platforms (which include a rapidly growing Instagram presence), daily email blasts and eye-dazzling print periodical, Schumacher Bulletin.

Next year promises to be a busy one. In May, to commemorate the 150th anniversary of Frank Lloyd Wright’s birth, Schumacher will reissue a collection that the great architect designed for  it in the 1950s. “They’re like nothing you’ve seen before: geometric but asymmetrical, in phenomenal colorways,” Caponigro says. And, she notes, under the guidance of Timur Yumusaklar, who became Schumacher’s CEO last year, the company will be rolling out “lots of gorgeous new products, our genius iPad app, and tackling at least three showroom renovations.”

“That’s a lot of change in a short time,” says Schumacher’s president, Benjamin Frowein, who brings to the table entrepreneurial and web-marketing experience in a range of industries. “We feel that our recent activities are an exciting next chapter of a continuing success story.”