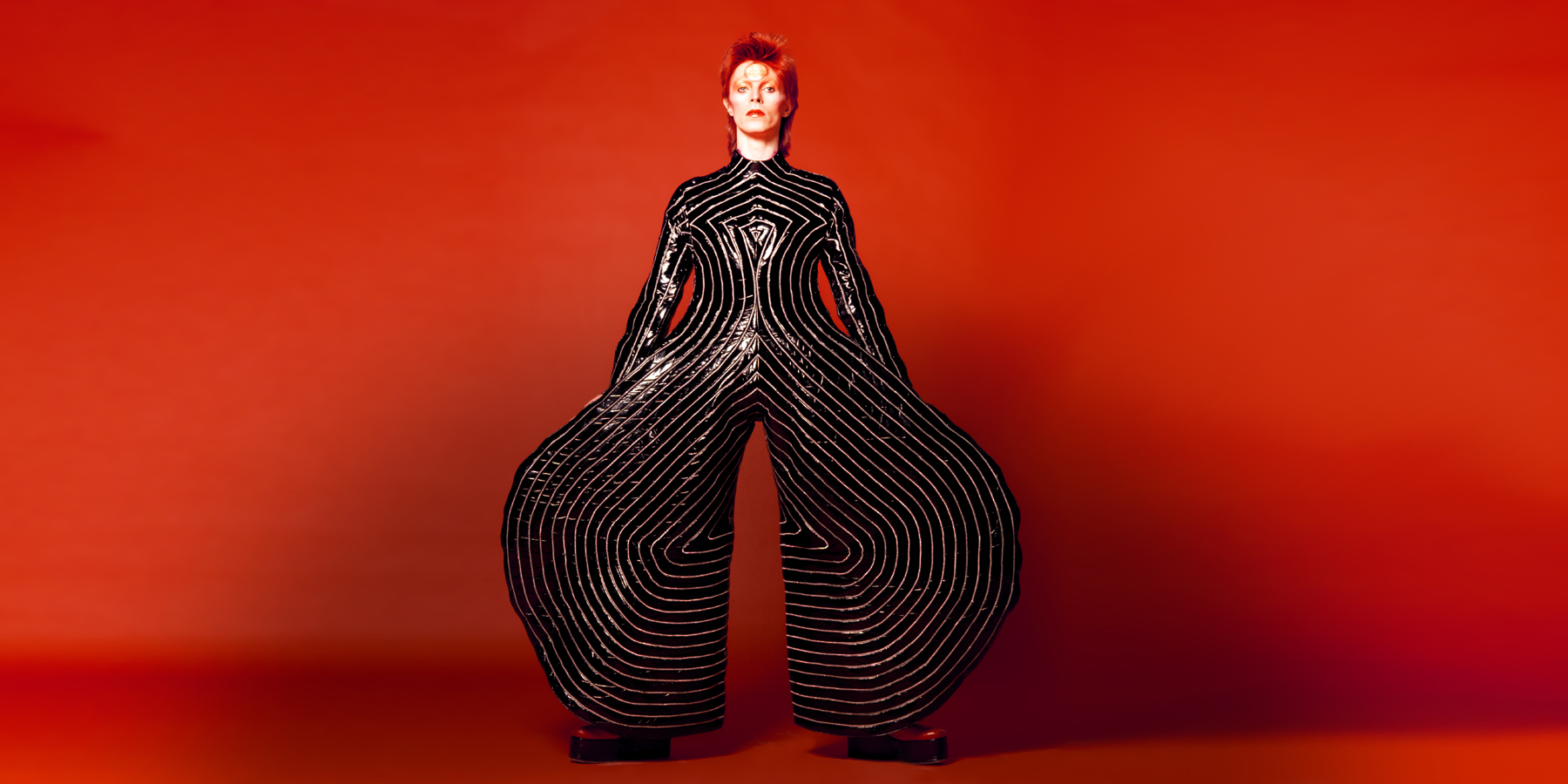 Filled with spectacular costumes and memorabilia from the rocker's extensive archive, the Victoria and Albert Museum's blockbuster show reminds us how ahead of his time Bowie has always been. 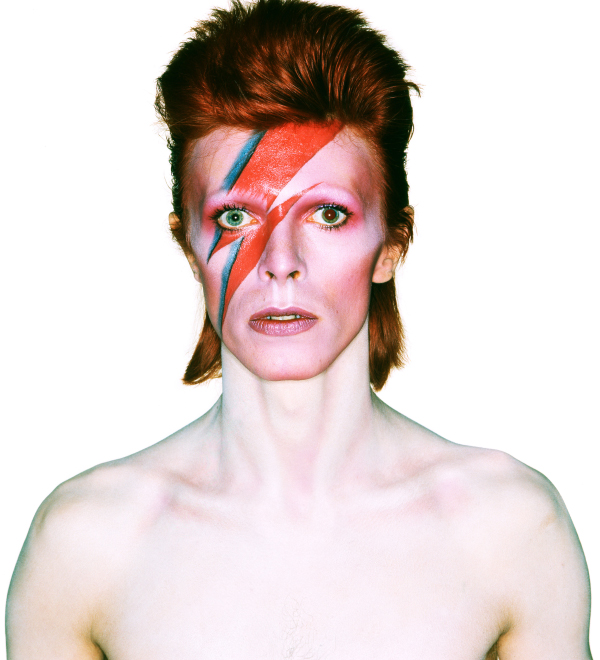 April 14, 2013An exhibition at London’s Victoria and Albert Museum explores the music, style and influence of chameleonic rock star David Bowie, here seen as Aladdin Sane — one of the many characters he created — photographed by Brian Duffy for the cover of the 1973 album of the same name (© Duffy Archive). Top: Bowie in a Kansai Yamamoto–designed body suit for the 1973 Aladdin Sane tour (photo by Matsayoshi Sukita © Sukita / The David Bowie Archive, 2012).

Where are we now?” So asks David Bowie in the first single from his 26th studio album, The Next Day, released last month. But the question on many of his fans’ minds lately has been “Where are you now?” Over the past decade, rock’s preeminent chameleon seems to have taken on his most enigmatic persona yet, becoming not quite the genius recluse, but certainly one of the most private pop stars of the 21st century. After his last record, 2003’s Reality, Bowie stopped touring and started lying low. Rumors surfaced that he was taking time out to paint and draw. Then, in March, just when we thought the 66-year-old legend might be hanging up his hat, he released The Next Day, which he’d secretly been working on for the past two years. Upon its release, the LP became the fastest-selling album of the year. Bowie says he won’t tour for it.

On the heels of the new album comes “David Bowie is,” a retrospective of his career at London’s Victoria and Albert Museum. Its curators, Geoffrey Marsh and Victoria Broackes, insist the timing is pure kismet. Bowie wasn’t involved in the show and doesn’t plan to attend, but the V&A was granted full access to his archive. The exhibition, a multimedia labyrinth tracing the icon’s ascent to superstardom and his influential transformations during the past 50 years, features album artwork, sketches, music videos, film and concert clips, set designs, instruments, handwritten lyrics and photographs by Brian Duffy, Herb Ritts and Terry O’Neill. The show’s highlight, however, is its display of some 60 Bowie costumes, from his 1972 Clockwork Orange–inspired Ziggy Stardust bodysuits designed by Freddie Burretti to the Union Jack coat he created with Alexander McQueen for the cover of 1997’s Earthling. All of Bowie’s spacey, gender-flouting alter egos — Major Tom, Ziggy, Aladdin Sane, Halloween Jack, the Man Who Fell to Earth, the Thin White Duke — show up at this glamorous canonization, as if to answer the musician’s (and our own) question: Where are we now? You could argue that we’re living in androgynous, liberated, forward-thinking times, and that we have David Bowie to thank for that. For further insight, Introspective spoke to the V&A’s Marsh about “David Bowie is,” on view in London through August 11. 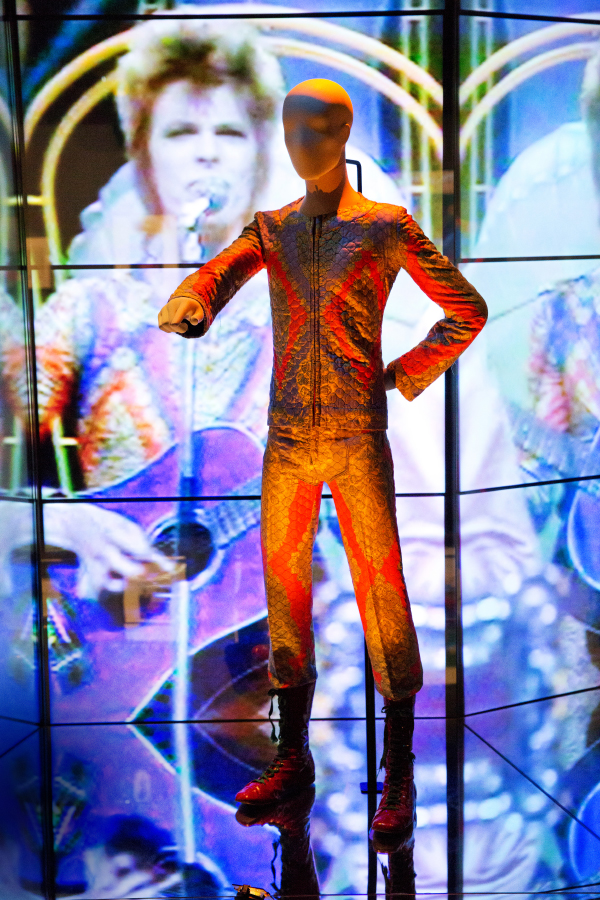 The V&A show includes such iconic Bowie looks as the Ziggy Stardust jumpsuit, designed in 1972 by Freddie Burretti. © V&A Images

BEFORE ITS OPENING ON MARCH 23, “DAVID BOWIE IS” GENERATED MORE TICKET SALES THAN ANY OTHER SHOW IN THE V&A’S HISTORY. WHY DO YOU THINK IT’S BEEN SUCH A SUCCESS?

When we started working on it in April 2011, we didn’t know about the new album coming out, but it certainly generated more publicity for the exhibition. But this show also plugs into human psychology. It’s a very human story about this strange guy, David Jones, who decided to create this extraordinary character: David Bowie. It taps into anyone’s fantasies about what they would be if they were born again, if they could construct themselves any way they wanted sexually and visually. We as a human race spend billions of hours trying to manipulate how we look because we’re not satisfied. Bowie has just taken it to a very extreme end.

THIS IS THE FIRST TIME THAT THE V&A HAS DEVOTED A MAJOR EXHIBIT TO A ROCK STAR’S CAREER. WHY BOWIE AND WHY NOW?

We wouldn’t do just any rock star — we’re interested in the theater end of it. Early in 2011, I got an email about coming to look at the Bowie archive. I had no idea how extraordinarily comprehensive it is. I’ve been to a lot of rock stars’ collections, and they’re often just press cuttings, costumes and instruments. Bowie has a full-time archivist, and the collection has been curated and fantastically documented since at least his Ziggy Stardust period. What fascinates people is unpeeling the onion, because David Bowie is a complete construction.

WHY DO YOU THINK BOWIE PRESERVED EVERYTHING?

I think you have to have an astonishing sense of self. At some point David Jones woke up and said, “I’m gonna be a star.” He had an ordinary name and an upbringing in an ordinary house in an ordinary suburb of London, but he has deep theater training and understood that when you become a character, you can be anything you want. If you think of Mick Jagger or Donald Trump, they are essentially themselves. Donald Trump doesn’t have to put his skin on to be Donald Trump. Bowie has lived this life for 50 years. There are 60 or 70 books written about him, but what clicked inside him has never been explained. That’s the ultimate mystery. 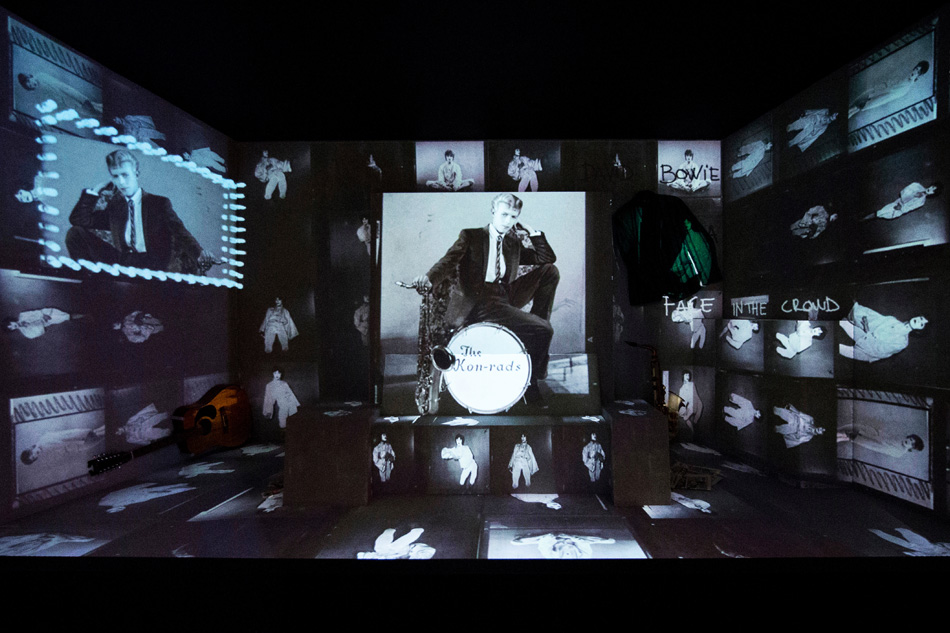 An installation at the V&A features a 1963 promotional photograph for Bowie’s early band, the Kon-rads. © V&A Images 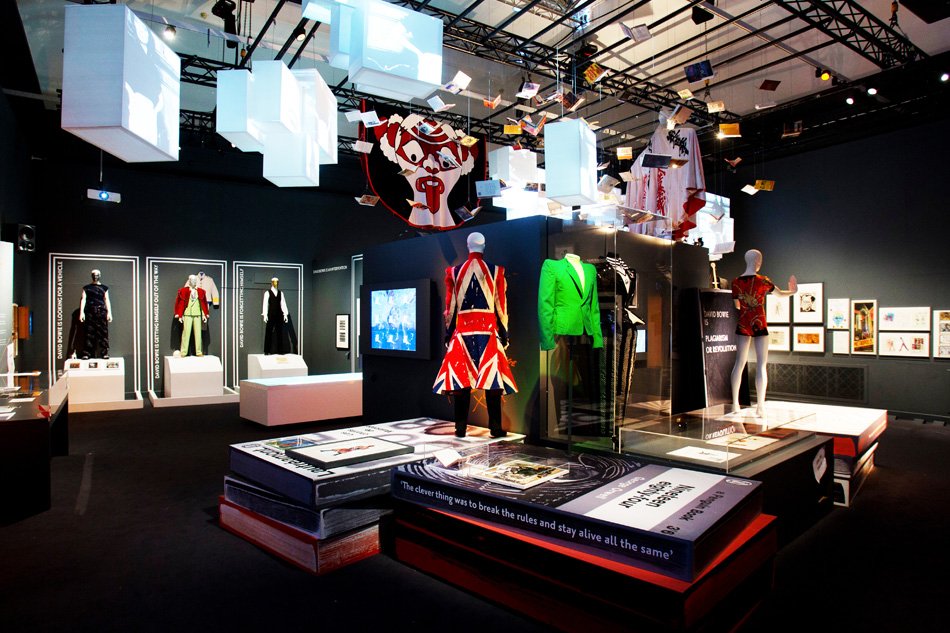 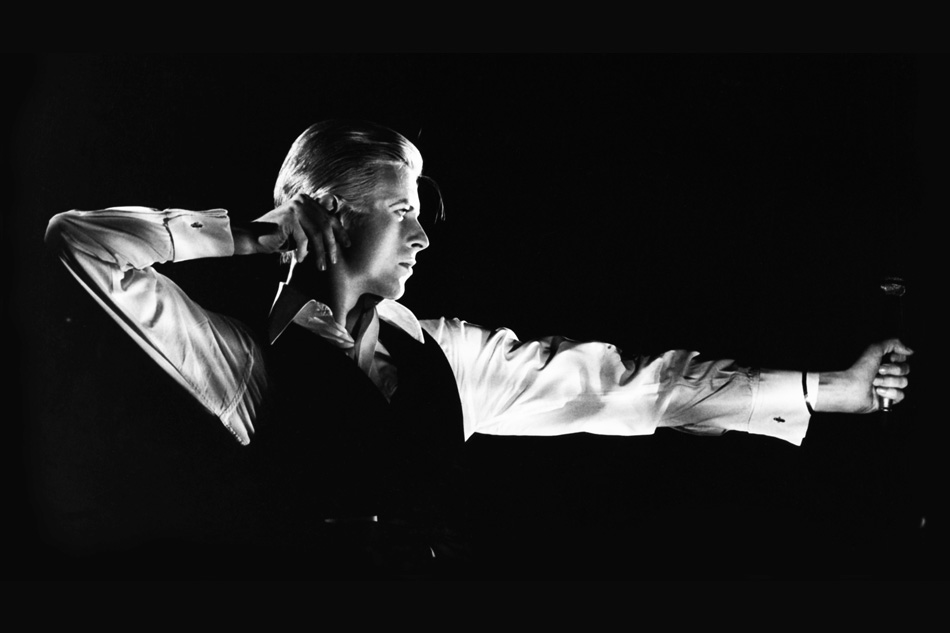 Bowie performed as his character the Thin White Duke on the Station to Station tour, 1976. Photograph by John Rowlands © John Robert Rowlands 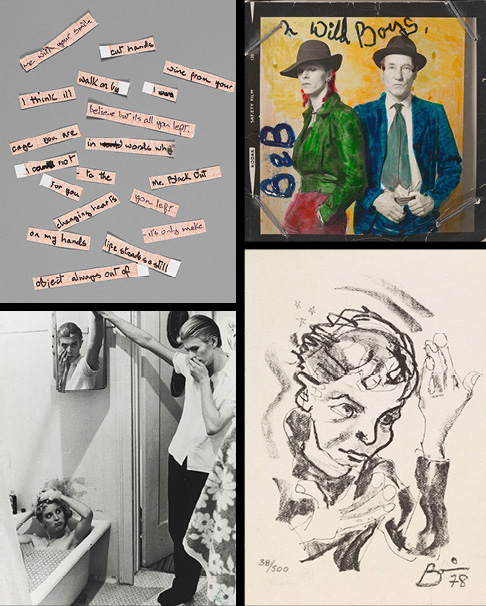 Clockwise from top left: Cut-up lyrics for “Blackout” from Bowie’s 1977 album Heroes; David Bowie and William Burroughs in a 1974 photograph by Terry O’Neill, hand colored by Bowie; a 1978 self-portrait in a pose adopted for the album cover of Heroes (previous three images courtesy of the David Bowie Archive 2012, © V&A Images); Bowie’s photocollage of manipulated film stills by David James from The Man Who Fell to Earth, ca. 1975–76 (courtesy of the David Bowie Archive 2012 © STUDIOCANAL Films Ltd.)

YOU COULD TAKE ONE BOWIE PERIOD OR CHARACTER AND CREATE AN ENTIRE EXHIBIT FROM IT. HOW DID YOU GO ABOUT STREAMLINING THE SHOW?

The agreement was, first, that Bowie would have nothing to do with it. We had access to anything we wanted in the archive but not to his private art collection. Second, his archivists would check all the text for historical accuracy, but they couldn’t offer their interpretations. We wanted to try to find out his fundamental drive, so we did this thematically. We looked at his songwriting, the making of the albums (cover artwork, posters and all the imagery) and the creation of characters — how they’re represented in shows and their impact on society in terms of censorship and issues about gender and androgyny. That’s the first gallery. The second gallery features his videos, stage shows and cinematic performances.

WHAT WERE YOUR CHALLENGES?

The costumes were incredibly difficult to exhibit. In the ’70s, Bowie had a 26-inch waist, which means we couldn’t buy commercial mannequins to put the costumes on. We had to get a sculptor to carve a new mannequin. To give you an idea of how thin he was, when his famous Freddie Burretti “Life on Mars?” outfit was worn by Kate Moss for a photo shoot a few years ago, they had to take it out to get her into it.

The track I’m really enjoying at the moment is “Memory of a Free Festival” from 1969’s Space Oddity. I think it captures brilliantly that feeling you have when you’re a teenager that anything’s possible. Why is Bowie important? He’s obviously a great musician, but he’s important because he said, “Don’t follow me. Don’t copy me. Look inside yourself and find what you’re good at. Be whatever sex you wanna be, have whatever look you wanna have. If I can do it, you can do it.” That thought is still very subversive. 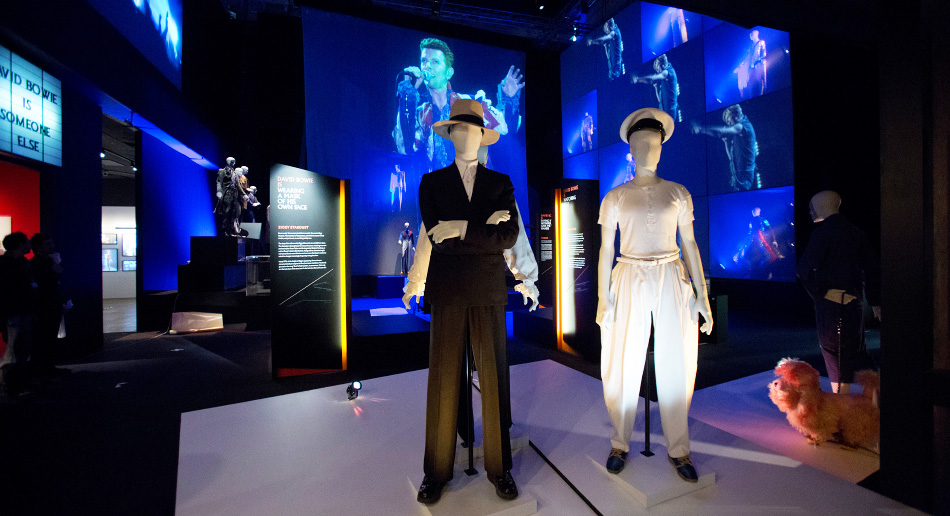 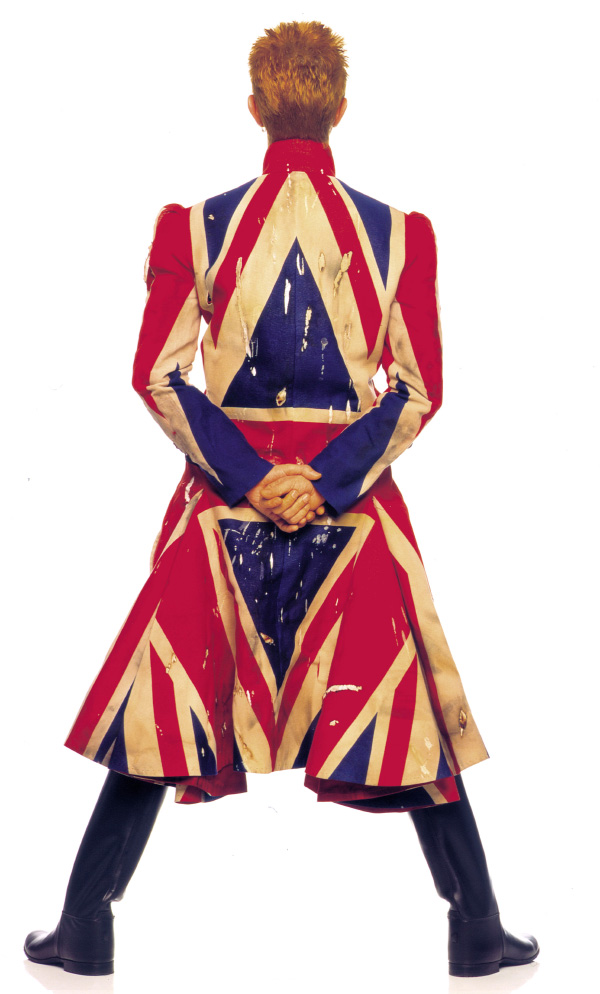 WHY DO YOU, PERSONALLY, THINK HE’S BECOME SO ELUSIVE IN THE PAST SEVERAL YEARS?

My view is that he got fascinated with the idea of how long you can stop being a celebrity before coming back. How many performers would say, “I’m so confident that I’m brilliant that I’m just gonna disappear for a year . . . or two years . . . or six years”? I think that’s what’s intrigued him. He’s setting a challenge to all the other stars: “If you think you’re so bloody good, go away for five years and see if anyone cares about you.”

I TAKE IT HE HASN’T COME TO THE EXHIBIT YET?

I haven’t seen him.

IF YOU COULD TELL HIM ONE THING TO GET HIM TO COME TO THE SHOW, WHAT WOULD YOU SAY?

I wouldn’t bother. David Jones has made a very successful career out of ignoring what people tell him. Everyone expects him to turn up. You know, “He’ll sneak in, be in disguise.” But one of the reasons he’s so successful is that he gets people talking about him because he doesn’t turn up. My theory is that he’s not gonna come, because why break the habit of a lifetime? If he’d actually listened to what people said, he’d never have done anything. He’s got an iron will, and, at some level, he still hasn’t achieved what he wanted to achieve back when he was 15 and sitting in a funny suburb of London. He’s still after something.