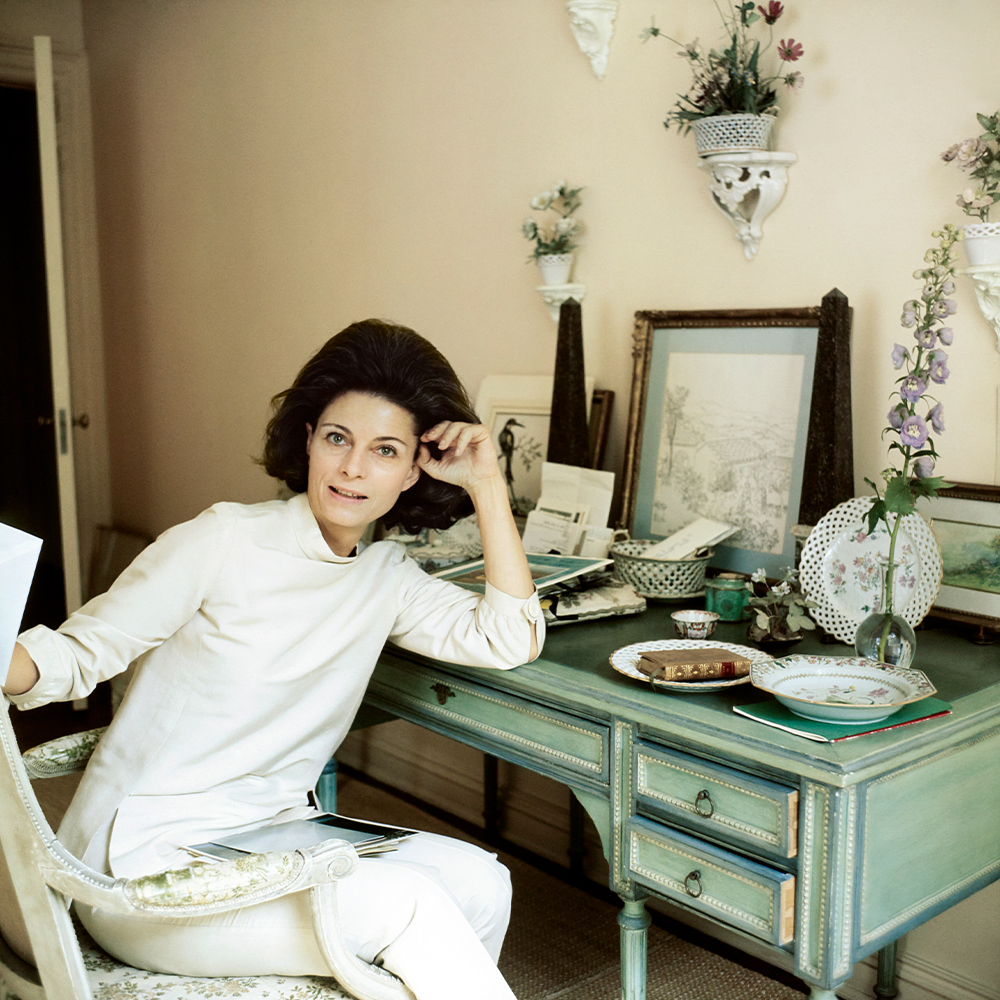 With the grace of a diplomat and the worldliness of a global citizen, the consummate hostess lays elegant, fantastical tables for a glamorous coterie.

October 16, 2022It is no surprise that the socialite, health and mental-illness activist and inveterate globe-trotter Deeda Blair was drawn to Marie Antoinette’s Petit Trianon. Blair is anything but ostentatious, and the last queen of France was, in a way, the same — her serene château at Versailles was a place to relax, enjoy pastoral pleasures and escape the gilded flamboyance and formality of her husband’s palace.

Blair’s affinities with both the monarch and her rural retreat are evident in the new Rizzoli volume Deeda Blair: Food, Flowers & Fantasy. As the book makes clear, Blair’s long silk-stocking life of travel, taste making and forging close relationships with some of the world’s most glamorous people — Kennedys and Shrivers, Hubert de Givenchy and Billy Baldwin — could justify a certain pretension. Instead, she is a woman defined by discipline, pragmatism and refinement.

In this voluptuous book, Blair presents a variety of fantasy dinner parties and luncheons, each inspired by her travels and photographed in her New York City apartment. (Designed with the help of Daniel Romualdez, it features furnishings and antiques purchased for Blair’s Washington, D.C., home, decorated in the 1960s by Baldwin.) The menus are tasty and beautifully presented but relatively simple, the flowers beautiful but not extravagant, the table settings exquisite but never overdone.

Take the dinner inspired by the Trianon. Chic resides in the details: a hand-painted silk tablecloth from Gracie, 18th-century Sèvres plates, bamboo-handled silverware and a loose, slightly wild flower arrangement evoking Marie Antoinette’s naturalistic gardens and meadows. The table and pair of Louis XVI–style fauteuils are pulled up to the living room fireplace for an intimate dinner for two.

The locations that inspire the dinners in this book are certainly lavish, but Blair manages to distill their over-the-top aesthetics to align with her signature, smartly tailored sophistication.

For the luncheon she imagines at Gustav III’s Pavilion in Haga Park, outside Stockholm, Blair goes completely blue and white, using a gingham under cloth and swirly-patterned faience pottery from Apt, France. To evoke aristocratic travel writer Rory Cameron’s pared-back style at La Fiorentina, his family’s Palladian-style villa in Saint-Jean-Cap-Ferrat, she sets a Maison Jansen table sans cloth but with all-white flowers. And she references the woven fences at Givenchy’s Château du Jonchet, in the Loire Valley, by using 18th-century plates with a basket edge.

One of the great pleasures of Food, Flowers & Fantasy is that in addition to being an entertaining handbook — offering advice about table settings, recipes and style — it is also a memoir. In the text accompanying each meal, Blair shares remembrances of her visits to the places and people that inspired them.

And Andrew Solomon’s introduction paints a picture of Blair as a gracious diplomatic hostess — her late husband, William McCormick Blair Jr., was appointed ambassador to Denmark by President Kennedy — who is also incredibly intelligent and accomplished. She held leadership positions in organizations and on boards that pioneered research into and treatments for breast cancer, HIV and mental illness.

Coming to a dinner at Blair’s spare, stylish Manhattan apartment, Solomon observes, is “like being inside a pearl” where you’re hosted by a woman whose impeccable clothes are “severe and simple, the kind that only the knowing eye can identify as couture.”