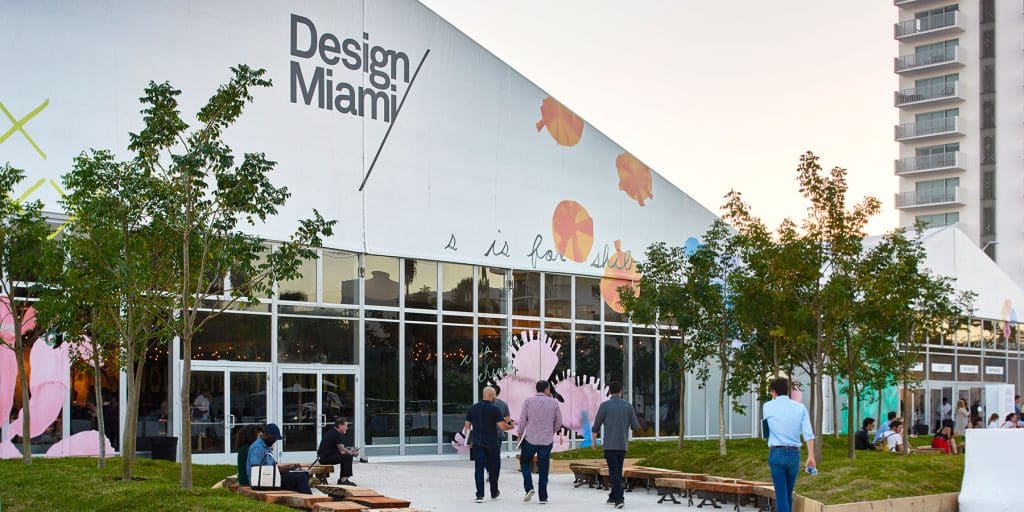 December 2, 2018Among collectors of 20th- and 21st-century design, few events are more eagerly anticipated each year than the opening of Design Miami. Since 2005, the fair has presented a tightly edited selection of groundbreaking work by cutting-edge artists and designers, both emerging and established, past and present.

This year’s edition, running December 5 through 9, features 33 leading international galleries, along with a dozen smaller-scale displays in the fair’s Curio program, which invites designers, curators and gallerists to craft cabinet-of-curiosity-like booths. The 2018 Design Visionary award will be presented to artist Pedro Reyes and fashion designer Carla Fernández, a married couple from Mexico City who have designed the fair’s graphic identity and will have a mini retrospective in a special booth they designed with curved steel walls.

Here are 10 riveting creations to seek out while exploring the fair. 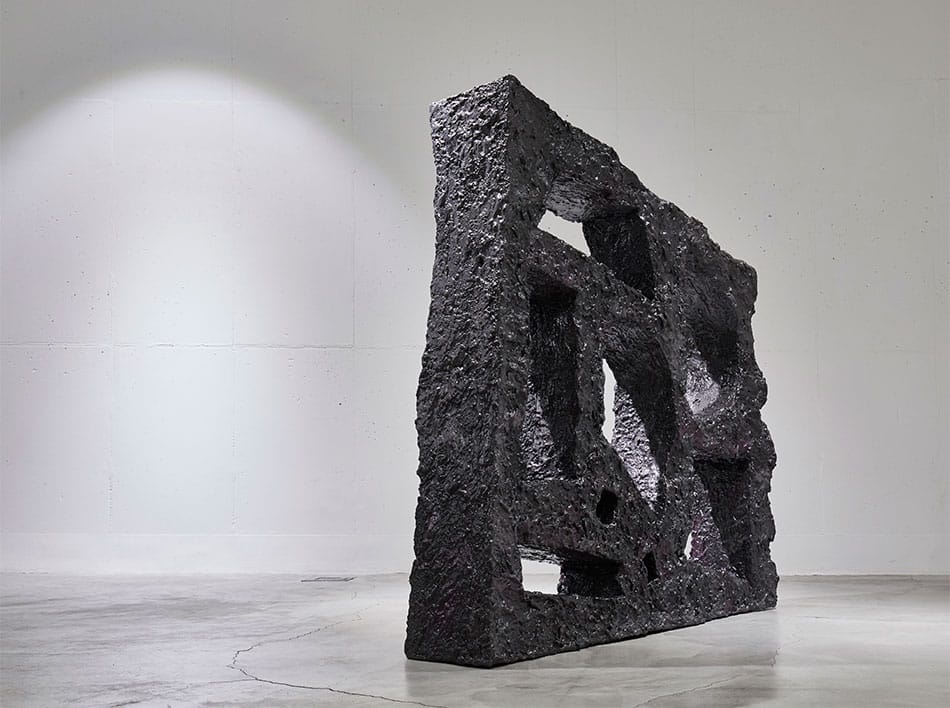 Cristina Grajales will introduce three new talents at Design Miami. Among them is Sang Hoon Kim, a designer from South Korea who studied at the Cranbrook Academy of Art and is now making furniture entirely out of memory foam. Kim’s process not only generates unexpected forms and textures for furniture but also gives new purpose to a material that his family has been producing for three generations.

“We’re presenting this incredible freestanding bookcase that looks like something out of a lava field or a lunar landscape,” Grajales says of Kim’s piece, which has a deeply pockmarked surface, irregular shape and loosely formed, geometric cutouts for storage. “He works with foam as if it were clay.” 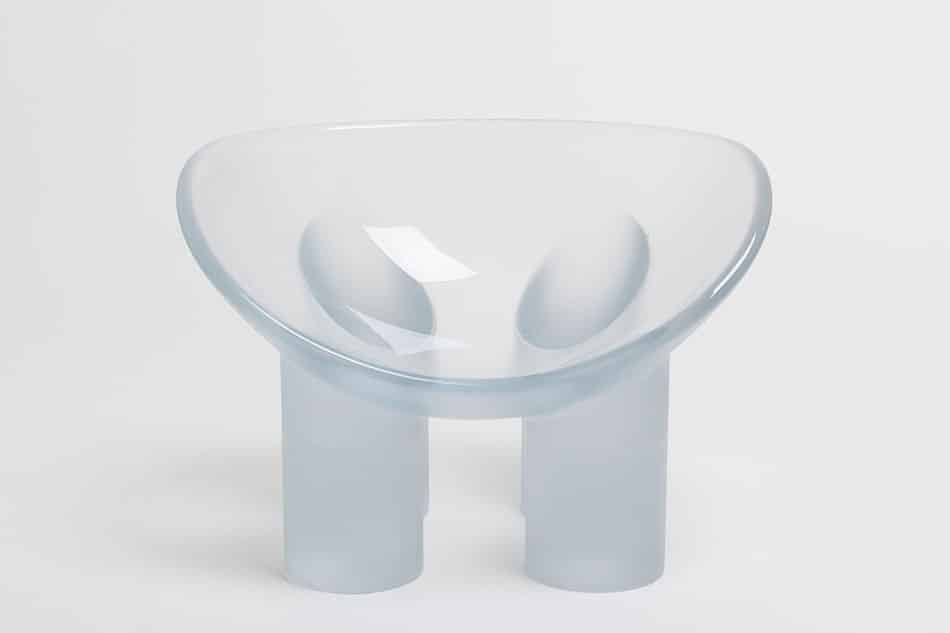 London-based Faye Toogood has a reputation for producing primal, pared-down furniture using simple geometries and a limited material palette. At Design Miami, Friedman Benda will present a piece of hers of surprising purity: the Roly-Poly Chair / Water, a visually light chair made from heavyweight lithium-barium crystal.

“It has an intuitive shape that’s also very naive,” says Marc Benda, cofounder of the gallery. “But what makes it exceptional is the material. The lithium-barium crystal is extremely dense and takes four months of annealing.” He notes that many versions broke before Toogood found the best manufacturing process.

“It’s probably the first piece where she is staking a claim in the pantheon of design with iconic work,” Benda says. “It’s such a feat for a young designer to come up with a work like this, and to be able to follow through and make it.” 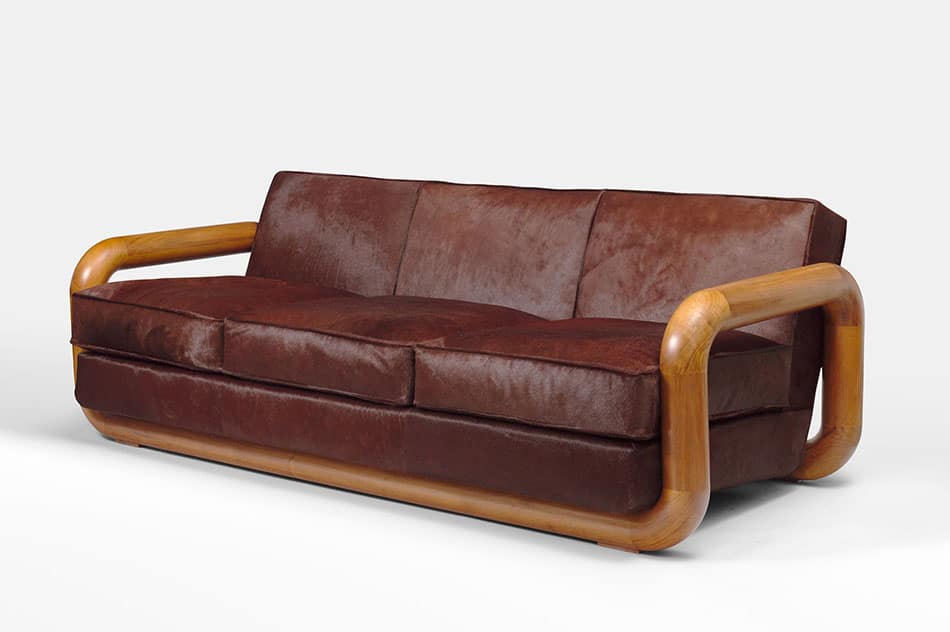 Jean Royère was arguably one of the most influential designers of the 20th century. While most collectors are familiar with his plump, snuggly Ours Polaire armchair and sofa, as well as his slender metal lamps and table bases, fewer have seen a piece like his Coin du report pour l’hiver sofa (sofa for a winter’s nook), which Patrick Seguin is bringing to the fair.

Originally presented at the pavilion for the Société des artistes décorateurs at the Paris international exposition of 1937, it features a sinuous frame of thick tubular walnut. “This piece, conceived only six years into what would be a distinguished forty-year career, evokes the imaginative and graphic use of line that would become a defining tenet of the designer’s elegant aesthetic,” says Seguin. 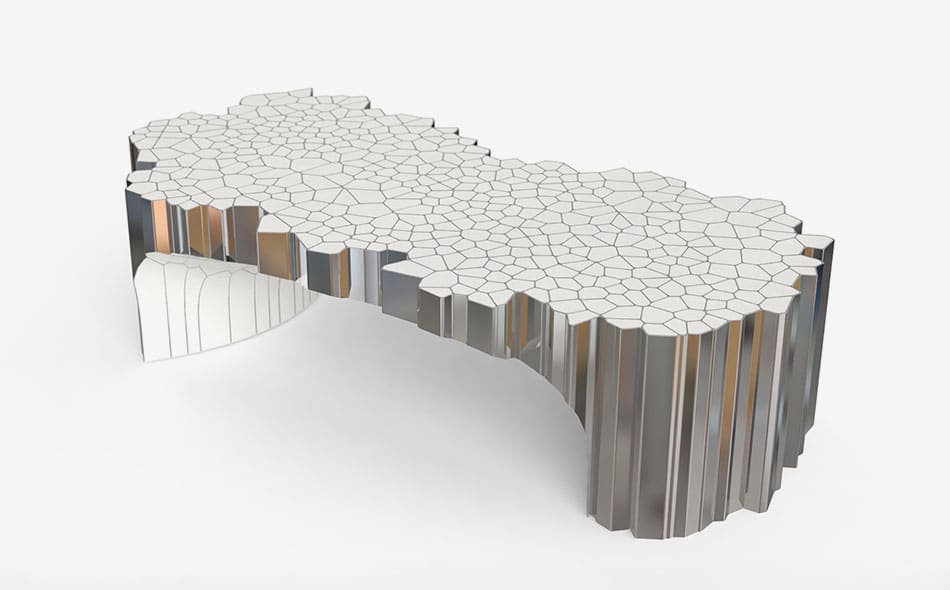 In creating his MY Collection of polished stainless-steel and enamel furniture for Gallery All, the Hong Kong–based British designer Michael Young took inspiration from cloisonné-enamel jewelry techniques as well as the patterns created by oil on water.

These influences, however, inform not merely his furniture’s surface treatment but its underlying structure. “One of the essential qualities of the series is that the pattern is integral to the form,” says Xiao Lu, cofounder of Gallery All. “Where traditional enamel techniques were applied to copper, here a new process has been developed with an innovative formulation that allows the enamel to bond with steel.” 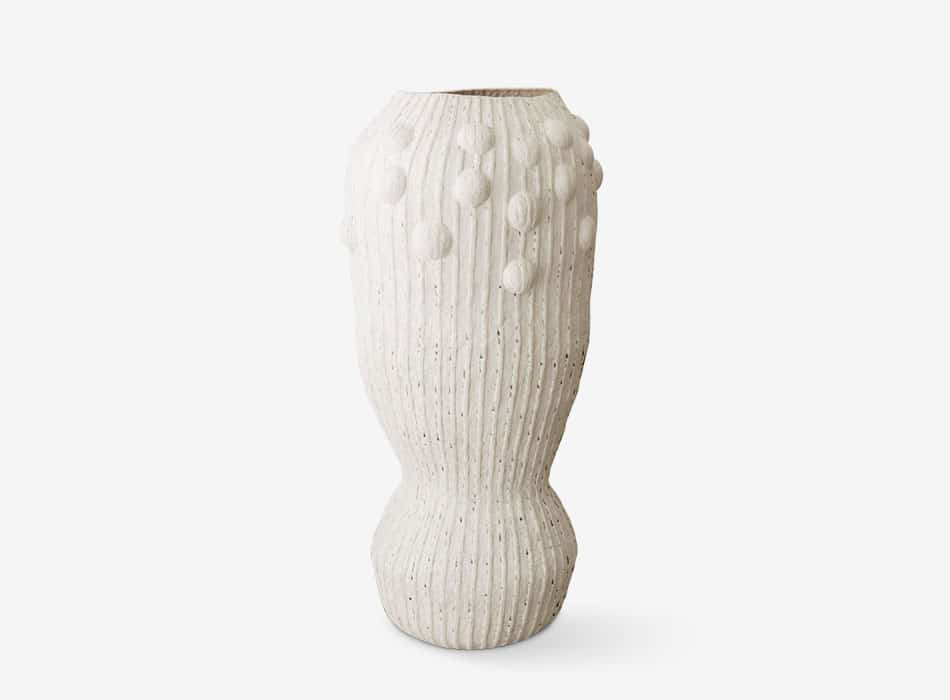 Hostler Burrows is showing a monumental new piece by the Finnish ceramist Kristina Riska. Riska has been testing the limits of her chosen medium since the 1980s but recently had the opportunity to try her hand at even bigger things.

“She did a residency in Oslo, at the National Academy of the Arts, where they have huge, oversize kilns, so she was able to work on a larger scale,” says gallery cofounder Juliet Burrows.

This piece, Avoiding Aesthetics, is more than four feet tall, while other pieces in the series (on view at Hostler Burrows’s New York gallery through December 14) rise even higher. “All of them are hand-coiled, pinched and built. So, they have this fragility, but at the same time they’re massive,” says Burrows. “They have tremendous presence.” 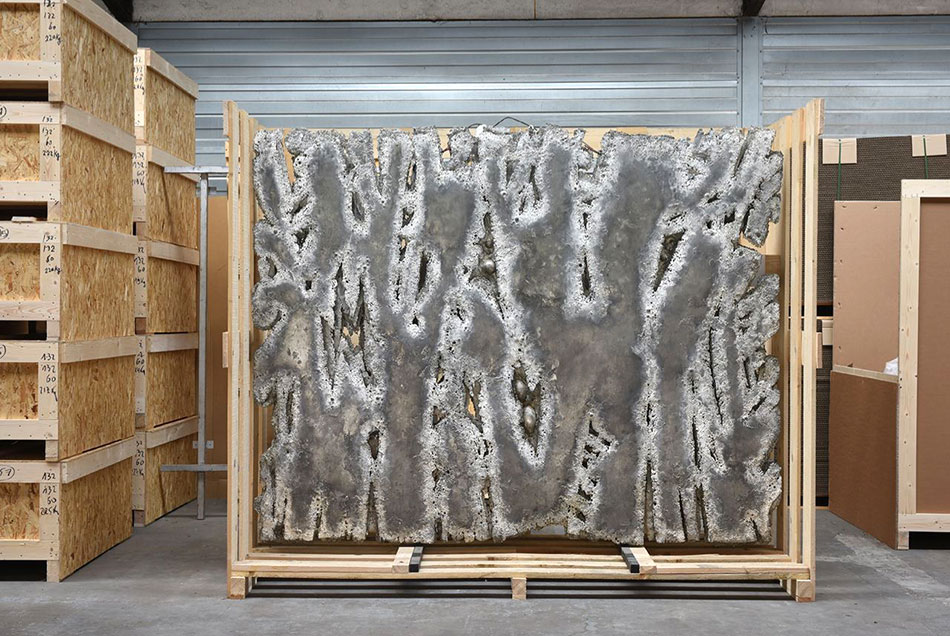 French artist Pierre Sabatier, a key figure in advocating for the integration of art with modern architecture in the middle of the 20th century, was no stranger to creating large-scale site-specific works. At Design Miami, Magen H Gallery will present a particularly monumental piece made of tin, silver and brass and measuring more than six feet tall by eight feet wide.

“Pierre Sabatier’s Passage II is a core representation of his practice and body of work,” says gallery founder Hugues Magen. “The work lures the viewer into an immersive textural experience. Originally a painter, Sabatier’s technique for his metal sculptures is unique in that he was able to add, subtract and transform metal in ways that mimicked the organic elements of the environment. His work essentially became a mural in nature.”

Bathy Bates by the Haas Brothers 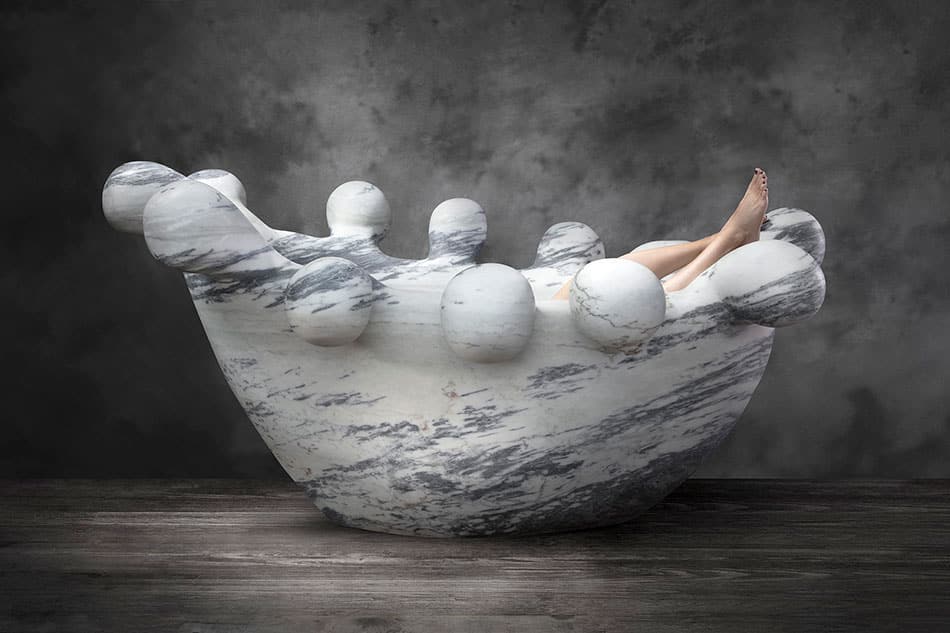 The Haas Brothers — twins Nikolai and Simon — have been making waves in contemporary-art and design circles for years. And they are set to make perhaps their biggest splash yet in Miami. “Ferngully,” a solo exhibition of their work, opens on December 5 at the Bass contemporary art museum  (where it will run through April 21, 2019), and their latest monstrous creation — Bathy Bates, a freestanding tub of hand-carved Pele de Tigre marble — will be given pride of place in R & Company’s booth at Design Miami.

“The piece plays on the tradition of baths and public fountains that have historically had a central role in promoting hygiene and public health, while also serving as meeting places where people could relax and socialize,” says gallery cofounder Zesty Meyers. “Bathy Bates is a playful work that can be used as both an indoor and outdoor sculpture.” 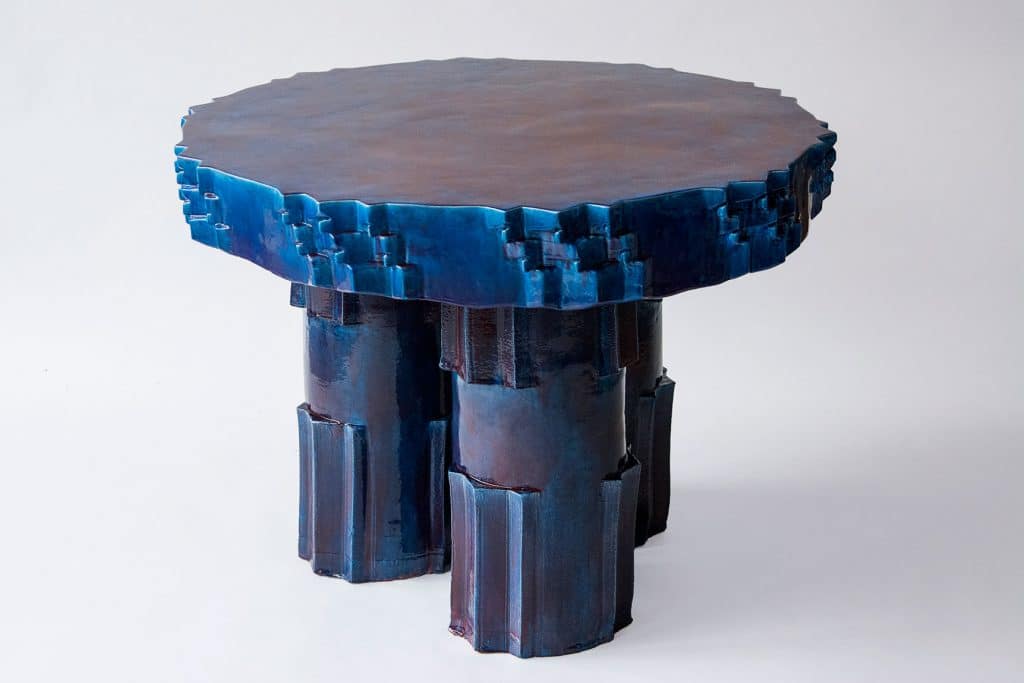 Dutch designer Floris Wubben experiments with new machines and production processes to push common materials in new directions. Among his creations are muscular ceramic tables that he extrudes with the help of a machine of his own design.

Although Wubben has most frequently used the process to create small side tables, this piece at Design Miami is a full-size dining table. “The scale is particularly impressive as a ceramic object,” says the Future Perfect founder David Alhadeff. “Technically speaking, it’s a masterwork to have been created in a nonindustrial facility.” 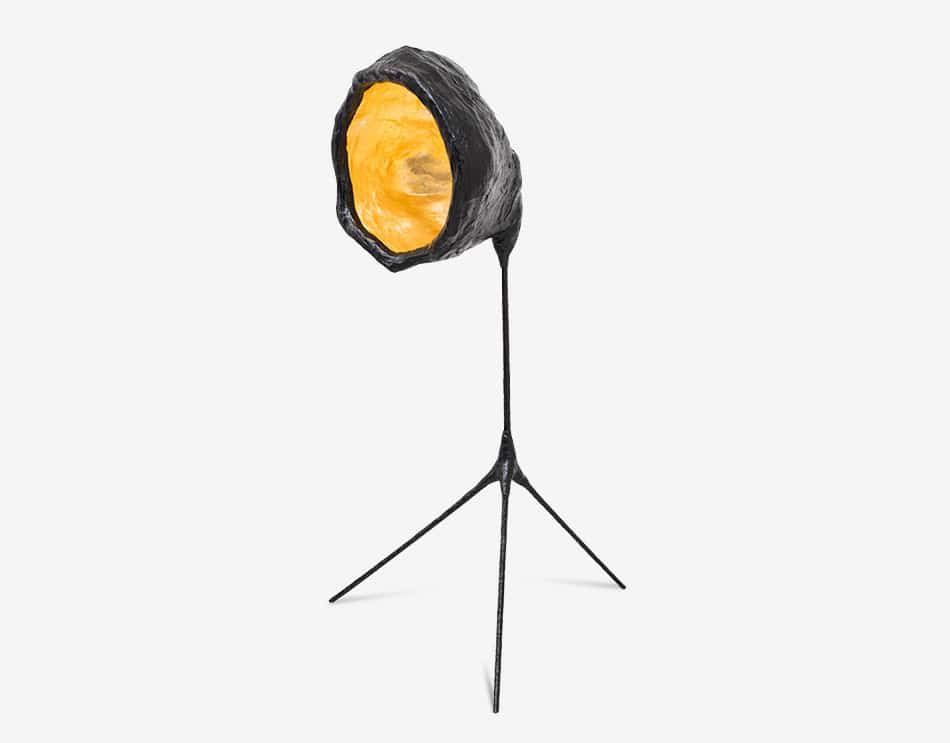 Since establishing his New York studio last year, Brecht Wright Gander has been making a name for himself with furniture and objects that live between the sculptural and the provocative. Todd Merrill is using Design Miami as a launch pad to introduce Gander’s work to a larger audience. 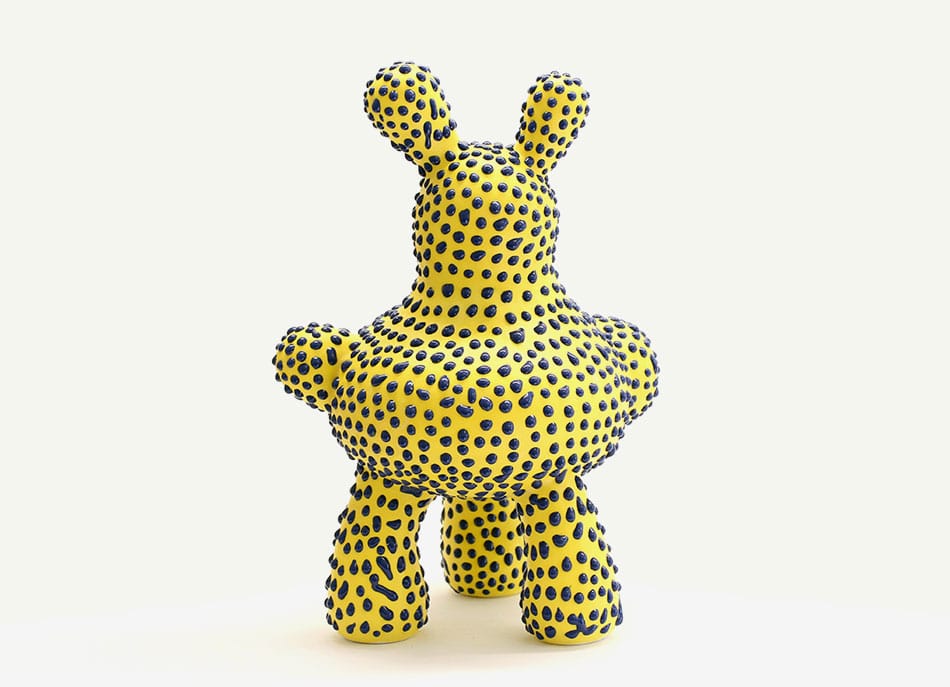 Among the striking objects on view will be Gelbie, one of numerous plump, colorful and highly textural creations by Ahryun Lee, a South Korean artist who established her studio in Germany after studying at London’s Royal College of Art. “The designer’s inimitable ornamental language, use of experimental techniques and unique interpretation of clay,” says gallery founder Joern Lohmann, “create a perfect symphony between craft, design and art that is anything but ordinary.”