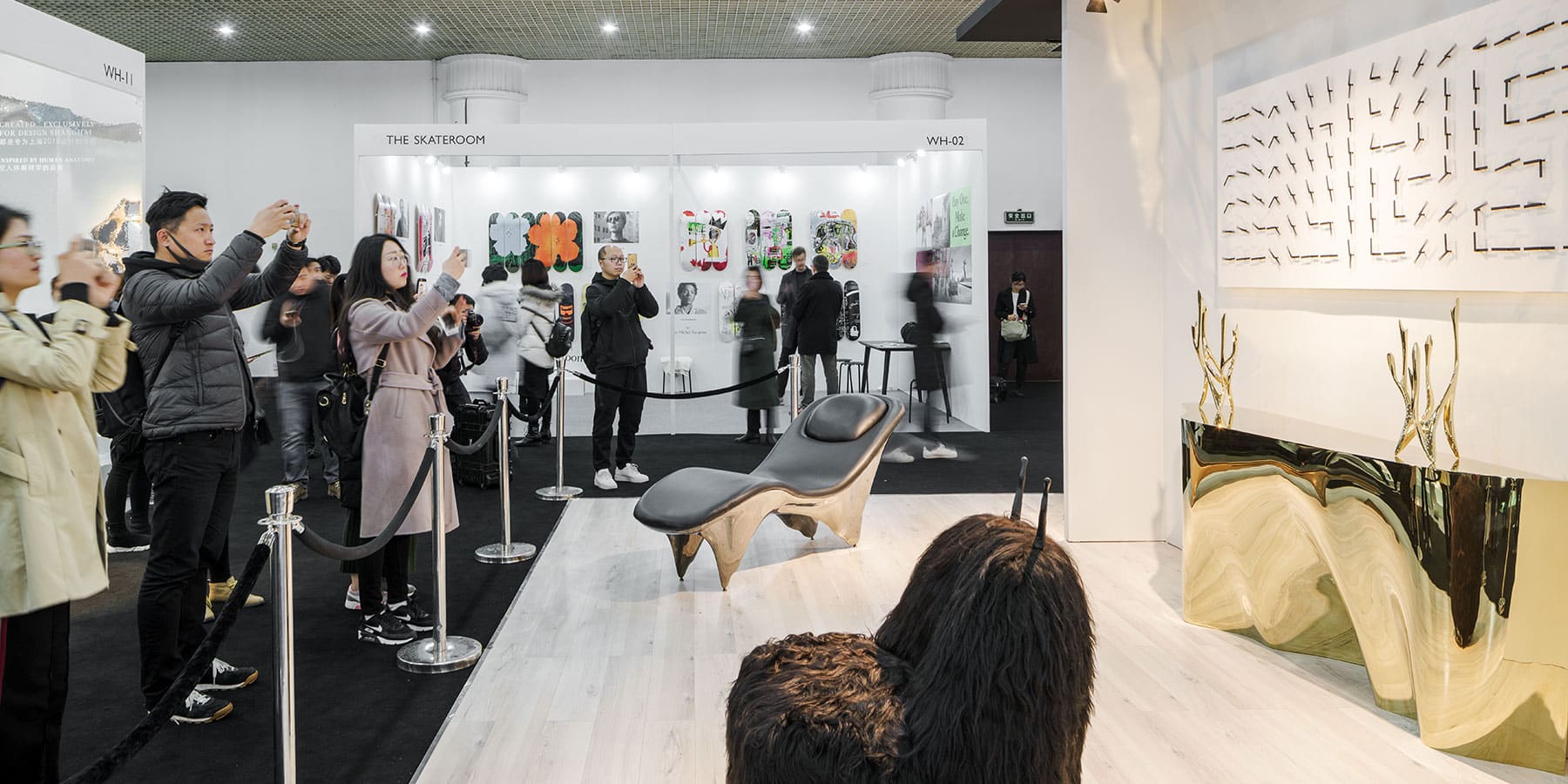 The Future of Design Is in Shanghai

In five short years, one fair has repositioned Shanghai as the epicenter of Chinese contemporary design. 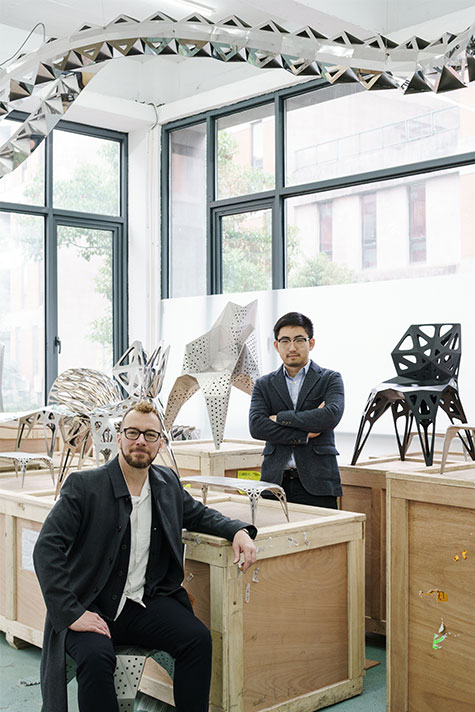 During Design Shanghai 2018, Gallery All’s director, Michael Vince Snyder, and cofounder, Yu Wang, spend time in the studio of one of their star Chinese makers, Zhoujie Zhang. Top: Gallery All’s booth this year is its fifth. It has been an exhibitor since the fair’s inception.

When Design Shanghai first launched, in 2014, local visitors took a few beats before catching on to its offerings. They adored fashion and collected art, but design was fresh territory. Still, the new fair’s founders had clearly picked the right moment: Buying for the home was becoming as important as fashion and cars to an increasingly affluent Chinese audience, and Shanghai — so emblematic of China’s whirlwind growth — was the right place to be. Only a decade ago, people dismissed it as all business, compared with the culturally steeped Beijing, but perceptions are evolving. The city’s higher quality of life, cosmopolitanism and friendly commercial environment all translate into a richer setting for the arts — and, it turned out, the perfect milieu for Design Shanghai, which celebrated its fifth anniversary in March (and will return March 6 through 9, 2019).

Michael Vince Snyder, a familiar face on the design gallery scene and the recently appointed director of Beijing- and L.A.-based Gallery All, made his first trip to Shanghai for the fair and saw it with fresh eyes. He and Yu Wang, Gallery All’s cofounder, walked the Shanghai Exhibition Centre with Introspective magazine, commenting on the scene and pointing out their favorite elements. “It’s as sophisticated as anywhere I’ve been,” Snyder said of the hyper-fashion-conscious crowd, average age around 25, which he characterized as comprising “stylish, thoughtful, informed and forward-looking people who want to learn and know. They’re very prosperous!”

Gallery All was an early player on this stage, bridging the gap between East and West and often blurring the lines between art and design. Although still young, Wang is an industry veteran, an architect and designer with a deep knowledge of fabrication methods. He has exhibited at the fair since the beginning. “Initially, there were just three halls, but now it’s the entire complex and multiple tents,” he said. “The scale is growing exponentially in terms of the quantity of booths and the quality of brands.” 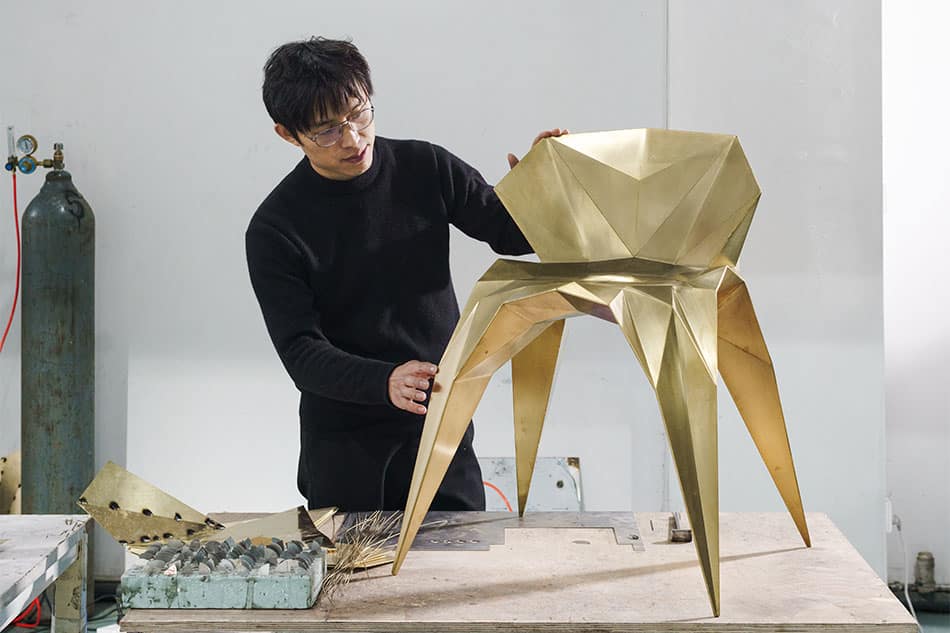 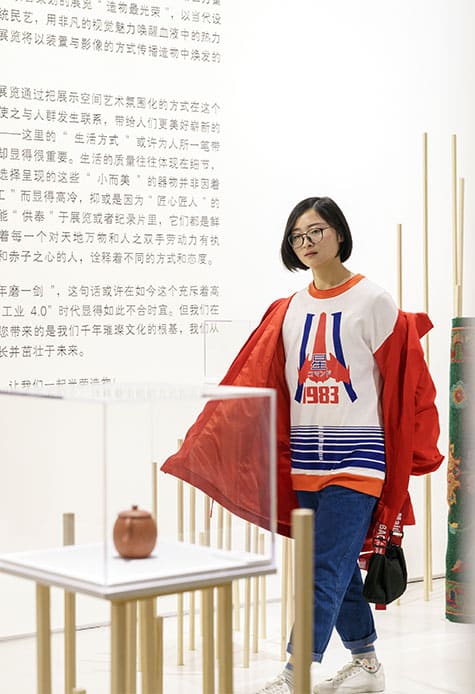 The Contemporary Design Hall included an installation by Elle Decoration titled Most Glorious.

Gallery All brought its A-game this year, from Zhipeng Tan‘s organic, dazzlingly golden tables and stands, which seem to be both extremely hard and also melting, to carpets inspired by traditional Chinese motifs but handmade in Nepal by Beijing-based Studio HVN, founded by Dutch designer Henny van Nistelrooy.

Gallery All is among the edgier, more creative galleries exhibiting, but the market is clearly growing for avant-garde offerings. Design Shanghai event director Zhuo Tan notes that “limited-edition design pieces in China have a huge potential, because Chinese elites all want something unique — and also for their collection to bring a healthy return, just as with art.” She adds that of the 68,000 visitors to the fair this year, 70 percent were trade — architects, interior designers, developers — pointing out, however, that the number of collectors and “PR and fashion people who come to learn” is expanding fast.

The country has other well-established design events, including the 20-year-old China International Furniture Fair, in Guangzhou, and the more cerebral Beijing Design Week. As far as Wang is concerned, however, Design Shanghai “is not the biggest but the best fair, with the best booths and clients and more international brands.” Moreover, he notes, “regional scope is expanding, too. It’s not just wealthy nearby cities like Wenzhou and Hangzhou. A growing number of visitors come from Xi’an, Chengdu, Chongqing and other further areas.”

For Western attendees, Design Shanghai is probably most interesting for the Chinese-based work on display, as opposed to that shown at the more familiar stands of Roche Bobois, Christofle, Swarovski and the like. Event director Tan says local designers have “improved massively in the past five years. When we launched in 2014, we found fewer than five Chinese brands that could meet our standards. This year, we have more than fifty.” Still, one decidedly international display caught Snyder’s eye: Moscow’s Heritage Gallery had a table, inlaid with a hammer and sickle and other such novelties, that the gallerist described as “mid-century baroque from the Soviet Union.” 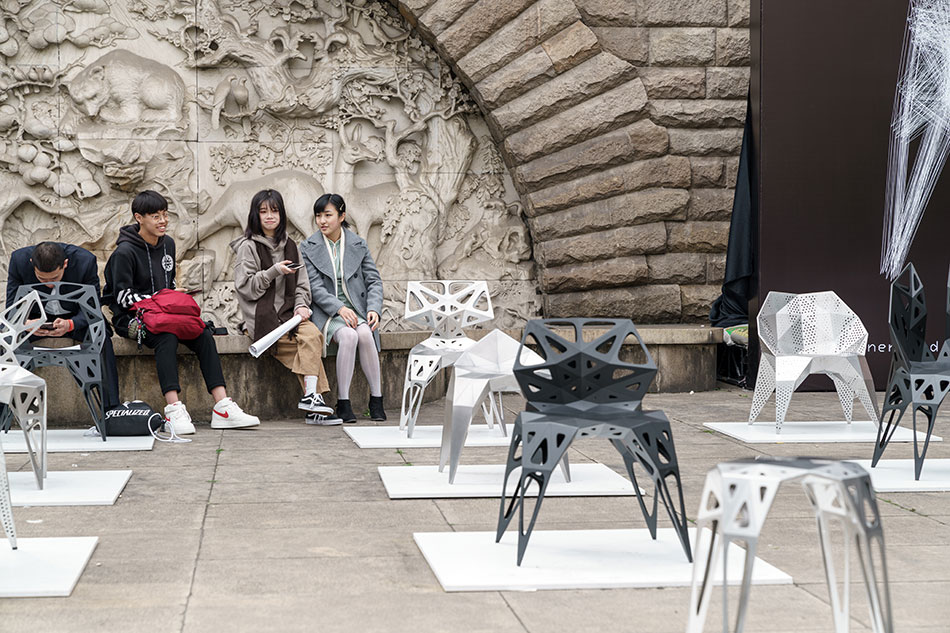 This is only a small glimpse of Endless Form by Zhoujie Zhang Digital Lab, which contains 100 iterations of the chair. 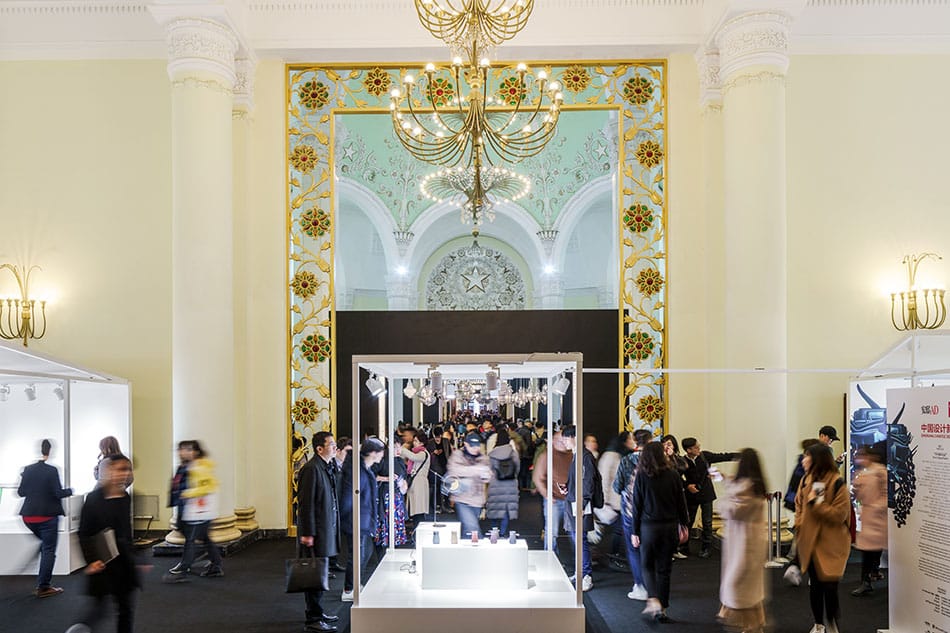 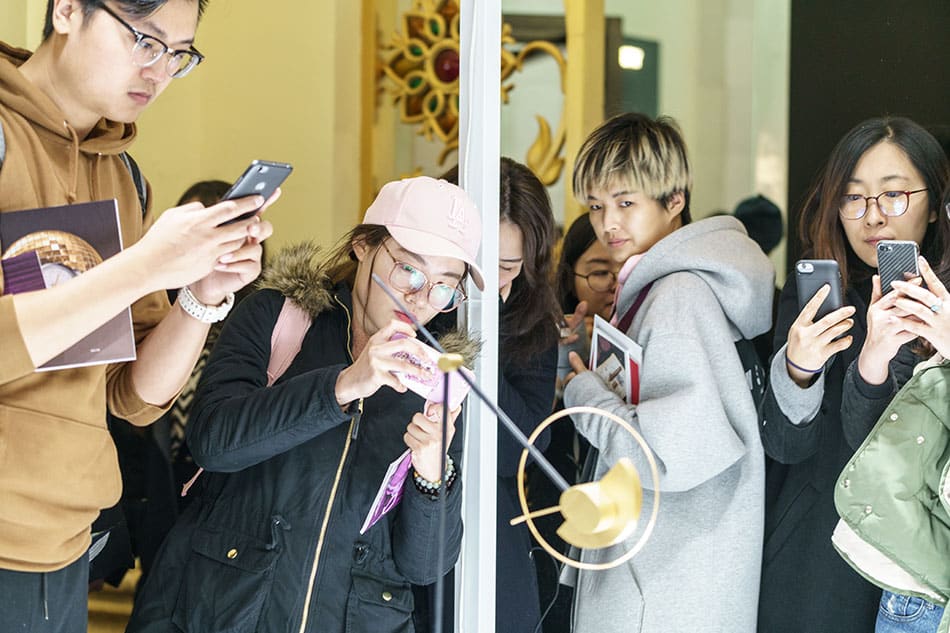 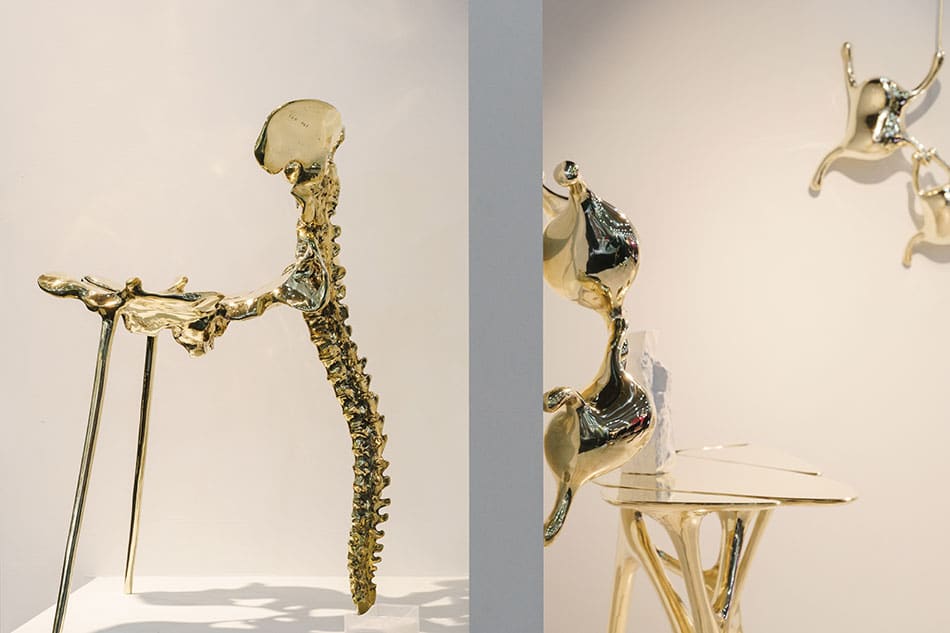 Polished brass works by Zhipeng Tan add an otherworldliness to the Gallery All booth.

The Future of Design Is in Shanghai
1/4
View Slideshow 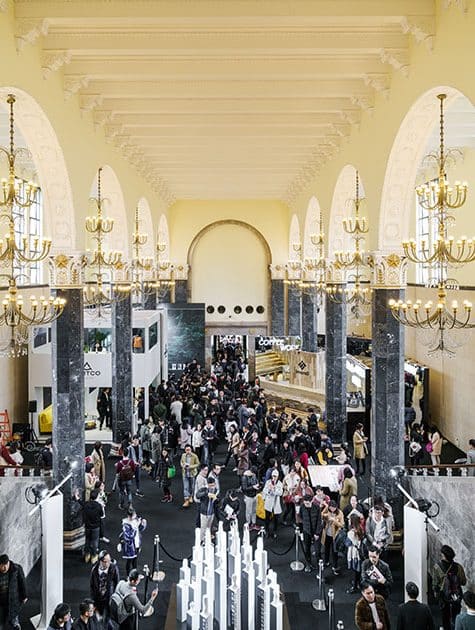 The grand entrance to the Kitchen and Bathroom Design Hall features City of Towers by Zaha Hadid Design.

There is nothing more bombastically Soviet than the Shanghai Exhibition Centre itself, completed in 1955 as the Sino-Soviet Friendship Building. The one-million-square-foot space, whose 360-foot spire made it the tallest structure in Shanghai until 1988, today hosts events like Shanghai’s top art fair, Art021, and every fashion show passing through town, from Fendi to Chloé to Diesel. Visitors are most impressed by the original terrazzo floors and whimsical ceiling art. On a stroll through the five interconnected pavilions, Snyder found much on offer to like. The cutely ironic limited-edition ceramic cherubs by Beijing-based sculptor couple Xiang Jing and Qu Guangci, on view at X&Q Art, have appeared at luxury retailers like Lane Crawford and museum stores at the Guggenheim and Victoria & Albert and seem to resonate with China’s current mood and aesthetic. Another standout was Banmoo, the wood-centered furniture brand from Shanghai-based Lv Yongzhong. Snyder admired the craftsmanship of the pieces, although Wang observed that they “wouldn’t be popular in the West unless you are really into Chinese culture. Some items are quite different based on lifestyle, including how dishes are served and such.”

Still, such distinctions seem to dissolve a bit more every day. “Shanghai is very modern, with great infrastructure, and there is a continuity throughout the whole city,” said Wang. Added Snyder: “With many cities, the circus comes to town, and they put on a show. But here, it feels like part of this big fabric, and it is genuine and grew out of the place. Come for the fair and for the city!” From the exhibition center, visitors can walk down Fumin Road, past hip boutiques like Dongliang, into the former French Concession and then east toward Xintiandi, the brilliant piece of urban renewal by American architect Benjamin T. Wood that is the site of the Design Shanghai @Xintiandi Design Festival (which was organized this year around the theme “The New Social Era on Boundary”). 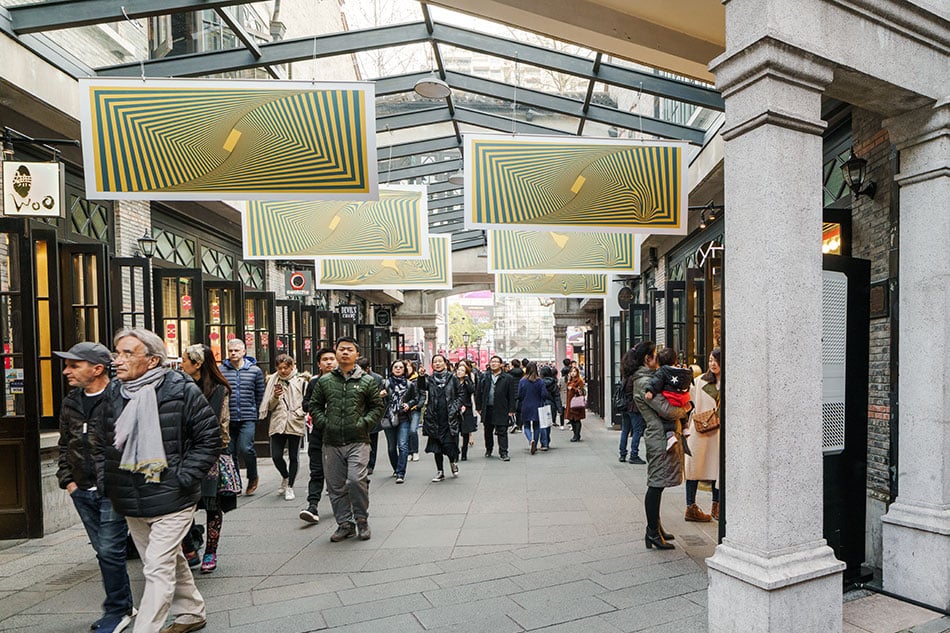 Pedestrians flowing through Design Shanghai in the City @Xintiandi walk under the installation Improvement by Turkish artist Seckin Pirim. 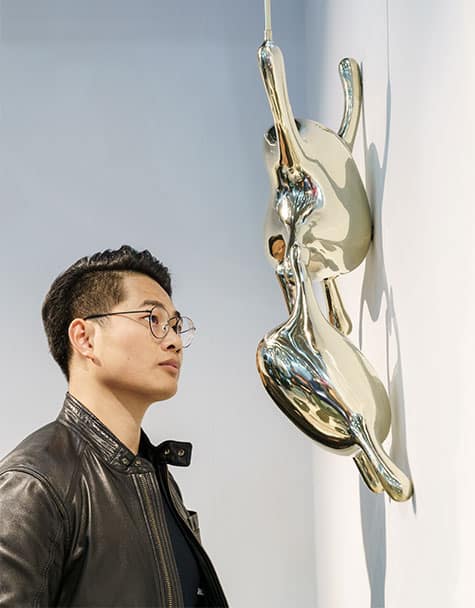 Right next to Xintiandi is the K11 Art Mall, emblematic of the transformation of mall into lifestyle experience. It was designed by leading Shanghai firm Kokaistudios, whose cofounder, Filippo Gabbiani, cites another reason to swing through the city: “This is the best place to study retail and consumer experiences, because things are evolving faster here than anywhere. Everyone is looking at China for design and fashion.”

The true cutting edge of design in China may be emerging on the outskirts of Shanghai, at the studio of Zhoujie Zhang. Represented by Gallery All, the Central Saint Martins graduate deploys 3-D printing and other high-tech methods to create one-of-a-kind pieces of metal furniture. “Nobody had seen this much digitally created design in one place before the 2018 Design Shanghai,” says Wang. “It is a big shock that the future is already here — and others will surely imitate it. There is no ability to produce this in volume abroad. The variety is limitless, with each product completely able to meet the tastes, body types and space requirements of the individual.” Perhaps the most memorable image of the week was a display of 100 chairs by Zhang, stretched out across the main courtyard of the exhibition center as though to infinity. And the name of his new brand, which launched at Design Shanghai? Endless Form®.