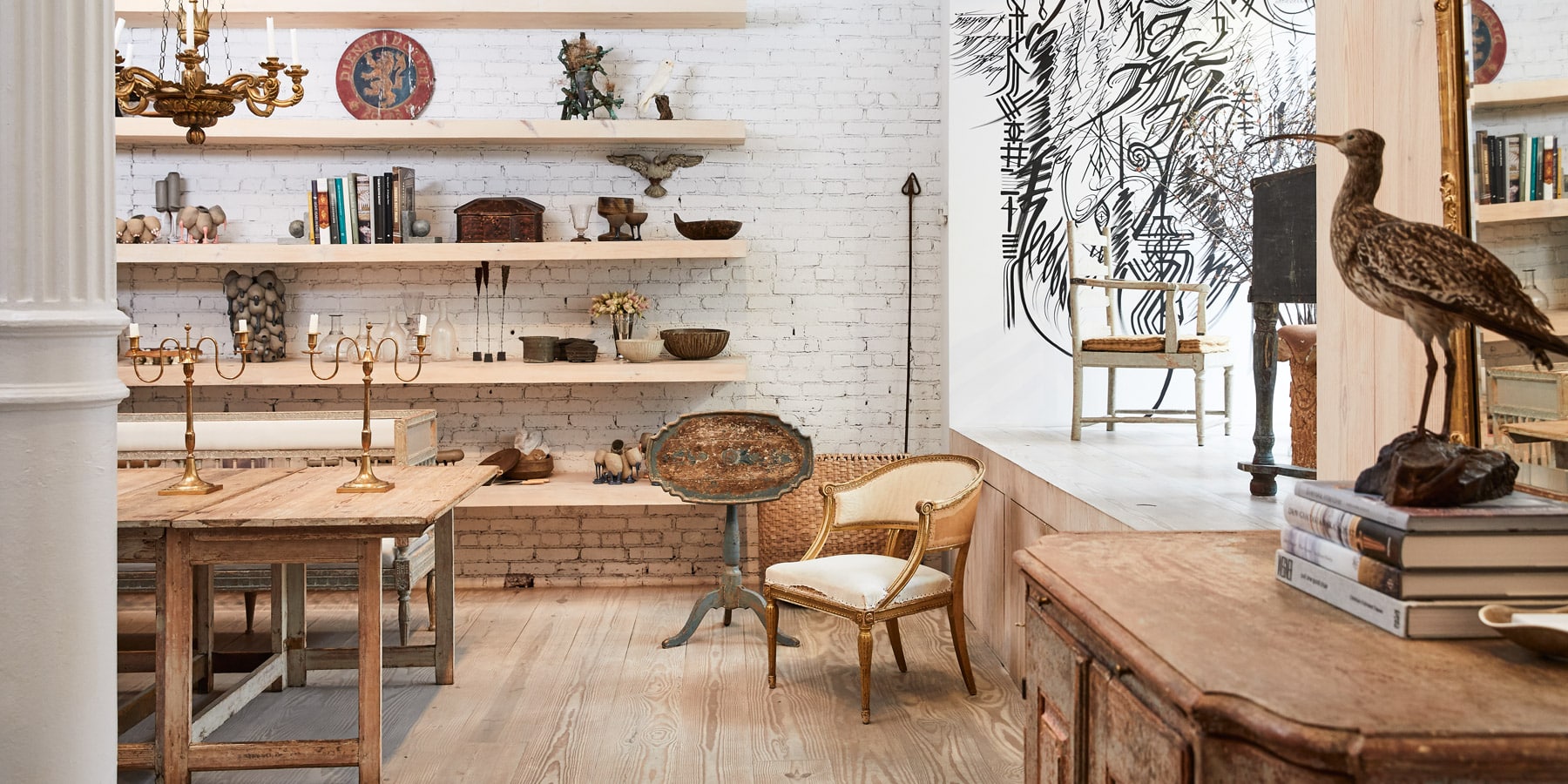 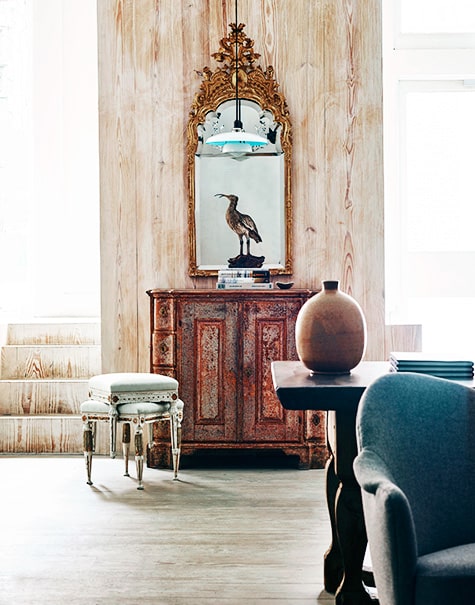 In the New York Dienst + Dotter gallery, a ca. 1920 Danish pendant light hangs in front of a ca. 1710 Baroque mirror attributed to Burchard Precht, while to the left of the cabinet sits a pair of Gustavian stools. Top: A collection of ceramics, boxes, sliver and other objects is displayed on a wall of open shelving. The ca. 1800 gateleg table is topped with brass candelabras.

Scandinavian antiques — stately, sober, muted, like the cloud cover over the North Sea — aren’t generally associated with high drama. Except, that is, when Jill Dienst is in the house. This afternoon, the proprietor of Dienst + Dotter Antikviteter is hovering near the entrance to her shop, located on Manhattan’s Lafayette Street a short walk from the Public Theater. She’s wearing a lavender chiffon slip dress with a petal-cut hem and extolling the virtues of a Swedish Baroque stone-top table from about 1740. It must weigh 20 times what she does, and it’s just been sold.

“One of my favorites of all time,” she says as she strokes the slab of Komstad limestone, buttery smooth on top and scarred with chisel marks beneath. “This is unbelievable, quarried and hand-carved in Sweden. The quarry closed in the eighteenth century. I love untouched pieces. I like to see the passage of time.”

In the nearby display window are a contemporary Finnish basket, its outer surface bristling with pussy-willow fronds, and an 18th-century phelonion — a woven chasuble worn by a priest of the Russian Orthodox church. Its ebullient golden fabric gives the garments currently on view in the Metropolitan Museum of Art’s “Heavenly Bodies” exhibition a run for their money.

Not all the dramas here are happy ones, however. Dienst nods toward a 1750s Swedish cabinet that originally had a glass-front top. “I was importing it on September eleventh, and the crate ended up sitting on the tarmac for days,” she says. “Someone broke the top half and threw it out. I was going to install this in my own house in Sag Harbor. I love the piece, but it’s got a backstory.” 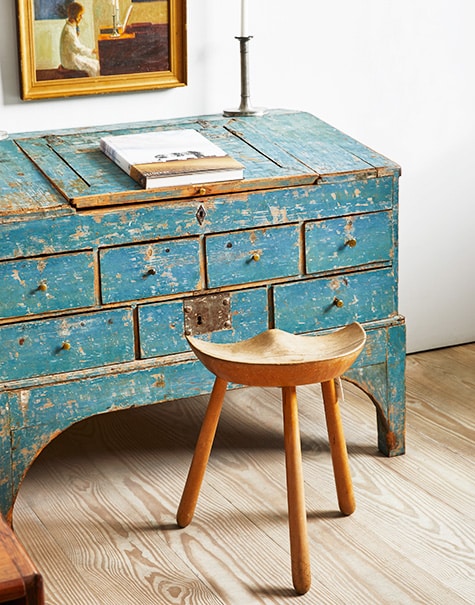 Poul Friis Nybo’s 1869 painting Interior with Young Girl Playing the Piano is mounted above a Baroque chest accompanied by a Mogens Lassen stool.

For Dienst, telling the unvarnished sagas of her finds is part of the pleasure of owning a gallery. Trained as an art historian (her first job out of college was in the European paintings department at the Met, under the legendary curator Everett Fahy), she went on to work for antiquaire Didier Aaron in the 1990s and then spent several years with interior designer Jacques Grange. Partly as a reaction to her francocentric workdays, she began collecting Nordic antiques. Museum-quality material was still accessible at the time, and Dienst gravitated to the best, and the quirkiest. Opening a storefront of her own was a natural next step, which she took in 2005.

“What I love about Scandinavian pieces is that they’re referential to the styles that were happening in Europe, but they’re pared down to a minimal form,” says the dealer, pointing out the Chippendale-inspired feet on an 18th-century cabinet from the Swedish port city of Gothenburg. “I’m a minimalist, and they’re also very easy — easy with color, how they integrate. They work with almost any other style.” She pauses for a minute and turns to survey the room, her dress billowing out behind her. “Well, maybe not Biedermeier.”

Her shop’s first address was in the Long Island village of Sag Harbor. The town’s seafaring traditions and the pellucid light of the East End seemed a good fit for the material, and Dienst already owned a second home there with her husband, lifestyle-brand adviser Dan Dienst, and their daughter, Emma (aka Dotter — Emma was five when the store name was chosen). The family lived in a former meetinghouse dating to 1810, and it became a model for the look of the nearby shop, including the wide-plank Douglas fir floors, luminous blue-gray walls and brass door hardware. 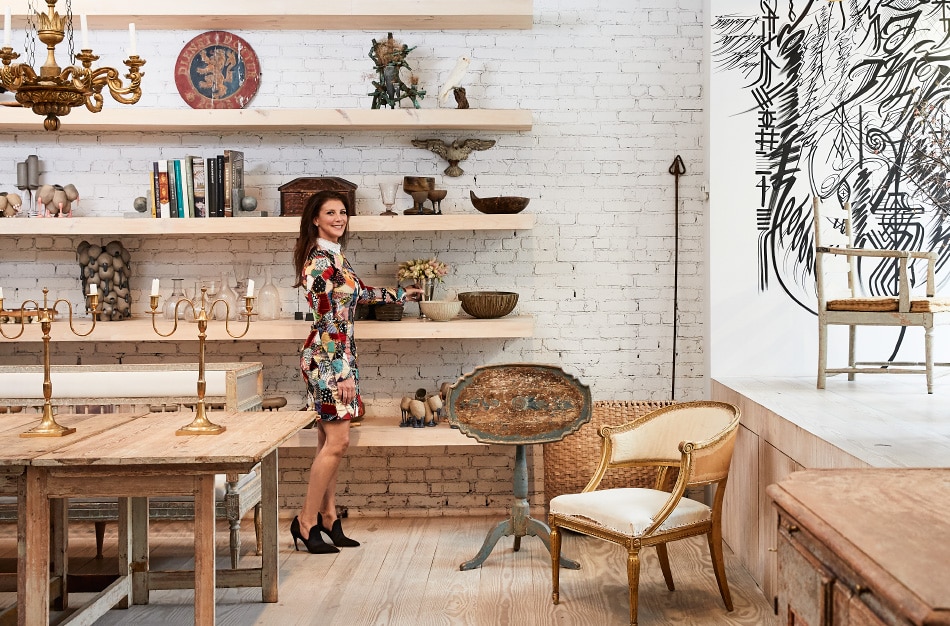 Dienst + Dotter founder Jill Dienst stands in the gallery among pieces that include a rare transitional Baroque/Rococo tilt-top table and a Gustavian bucket chair. The drawing in the window is by tattoo artist JK5, for whom she hosted a book party.

Before long, the interior design trade was beating a path to Dienst’s gallery — not only for her scholarship and choice inventory of Gustavian dining chairs and settees but also for her contemporary eye. From the start, she’s mixed her antiques with Scandinavian modern pieces, especially rare, often one-of-a-kind examples of furniture and lighting by Danish master Poul Henningsen. In 2010, she took a deep breath and relocated to Manhattan, taking a second-floor space on Madison Avenue and 69th Street. Two years later, she moved into her current quarters, downtown. While her focus is unaltered, Dienst + Dotter’s purview has expanded in the 6,000-square-foot space to include contemporary ceramics, art objects and a broader range of the books she has always carried. Her audience has expanded, too — and now includes visitors to her storefront on 1stdibs.

“I have the coolest clientele — music people, fashion, art, movies — and it is more and more international these days,” Dienst says. “There are very few interior designers who haven’t been in here. They’re part of the house. And I throw good parties.” 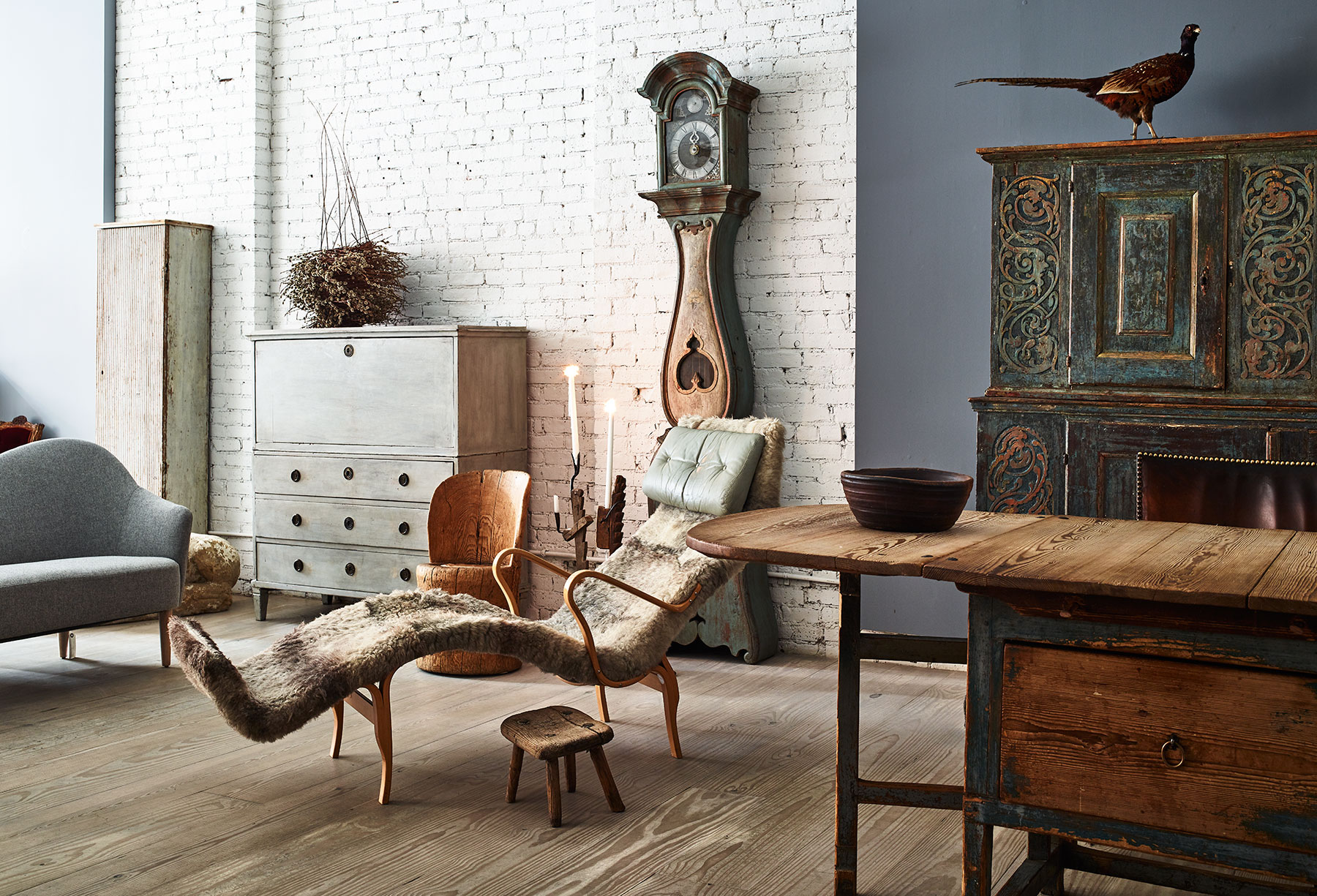 A Bruno Mathsson sheepskin lounge chair, paired with an Allmoge farmer’s bench, sits next to an Allmoge drop-leaf table that is topped with a wooden bowl. A Swedish Gustavian tall-case clock stands against the back wall, to the right of a Gustavian spice cabinet.

In 2014, Dienst hosted a book bash for the tattoo artist JK5. “I went home to change my clothes, and when I came back, he’d done that wall drawing in the window as a gift. It’s staying right there. I love collaborations.” She’s contributed furniture to window displays at Lanvin, Ralph Lauren and Saks Fifth Avenue; musician/actor Mary K. Blige and artist Carrie Mae Weems have used pieces in photo shoots. Dienst enjoys seeing where her stock ends up, and the farther afield it goes, the happier she seems to be. It’s hard to imagine that she once had trouble transitioning from the museum world to retail.

When she first opened, the fledgling dealer would bring back a 40-foot container from Scandinavia every three months. Today, she makes two trips a year, preferably in the summertime. “I go alone, and I network,” she says. “I know where the bodies are buried. I’ll visit a friend who says, ‘You need to go to meet this person,’ I wake up at four in the morning to drive — it’s all of that. I love that detective work.” Grounded to this day in museum culture, Dienst never buys a piece unless she’s seen it in person. “I’ll remember something I saw in a house twenty years ago,” she explains. “If it becomes available, I’ll buy it. But I want to know that it moves me — and that it’s correct.” One of her life goals, she says, is to fund scholarship in the field that has become her life’s passion: “The Met needs a Gustavian room.” 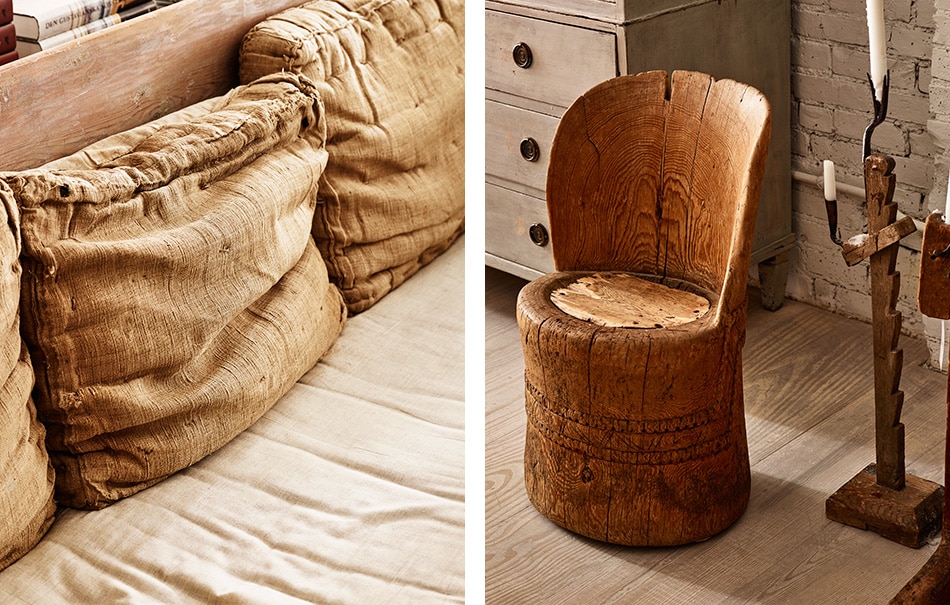 Left: A 1768–80 Gustavian transitional trågsoffa. Right: A Swedish wooden seat known as a kubbstol is set next to an Allmoge standing candleholder.

As we tour her sunlit gallery, Dienst keeps up a steady dialogue on subjects ranging from decorative Swedish splatter painting (rare on furniture, as it was often whitewashed over when fashions changed) to wormholes (also rare — the Nordic chill discourages pests) and reproduction glass (sadly prevalent, especially on Henningsen lights, where new shades are often passed off as originals). Below stairs is a basement piled high with more blue-chip stock. Dienst can sympathize with those who love the hunt, while admitting that it’s not for everyone. Glancing at a fancy-painted cabinet from Jämtland, Sweden, dating to 1829, she says, “This one is a true museum piece. But I don’t care about that so much — it’s got to be pretty, also.” 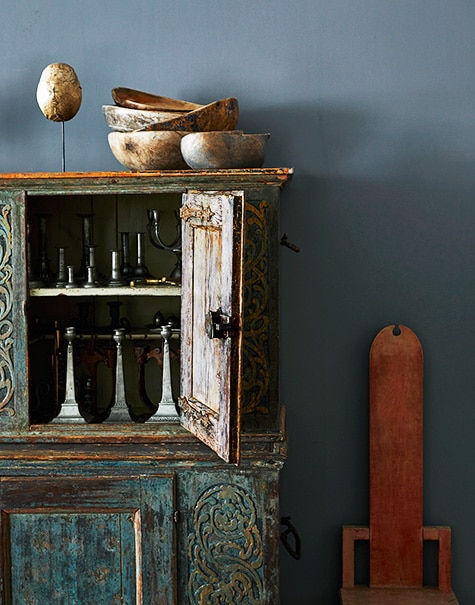 A ceremonial artifact and a collection of carved and turned antique wooden bowls sit atop a Baroque cabinet filled with antique candlesticks. To the right is one of a pair of ca. 1910 Arts and Crafts chairs.

The most accurate way to describe Dienst might be this: She’s an academic with a collector’s heart and a designer’s eye. It’s a winning combination, and one manifested in the spare, some might say understocked, look of her gallery. “If I had an airport hanger I’d be happier,” she says. “The pieces need room to breathe.”

She has hit upon her ideal ratio of space-to-contents in the duplex loft, a short walk away, that she shares with her family. It was conceived in partnership with the esteemed British architect John Pawson. Their five-year collaboration was a learning experience for both, punctuated by its own share of high drama: Hurricane Sandy hit within months of the loft’s completion, causing damage that took another five months to repair. Fortunately, the carefully curated treasures on view — including a circa 1770 Swedish armchair with barley-twist legs, Jørgen Høvelskov’s seminal Harp chair from 1968, a two-part Joris Laarman cocktail table in snowy marble — survived intact. Dienst has moved past the incident, but she still tells the story now and then. She knows it’s a good one. 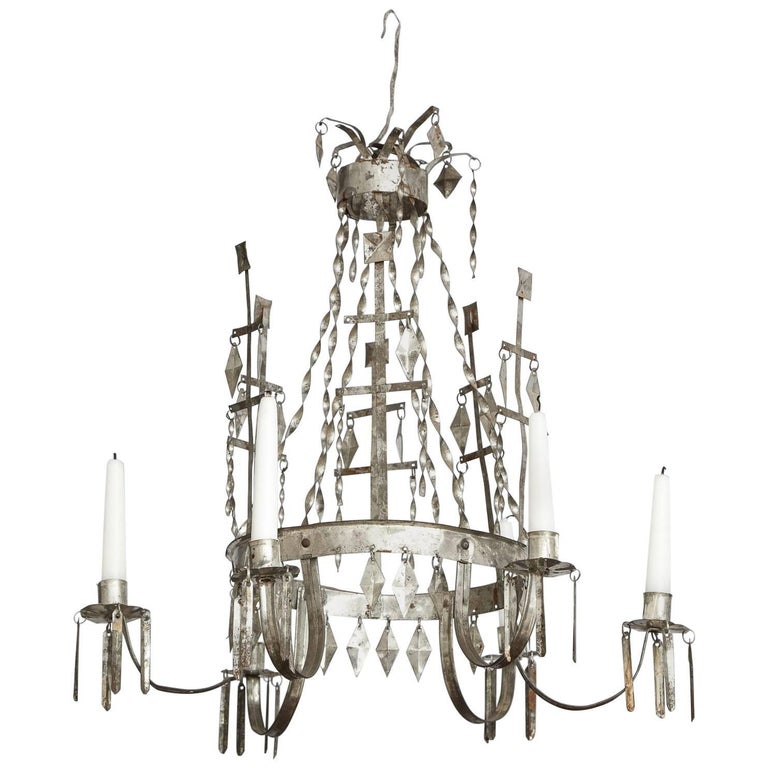 “This charming tin chandelier is magical and reflective. In Scandinavia, candles are important elements found in everyday life, in interiors and exteriors.” 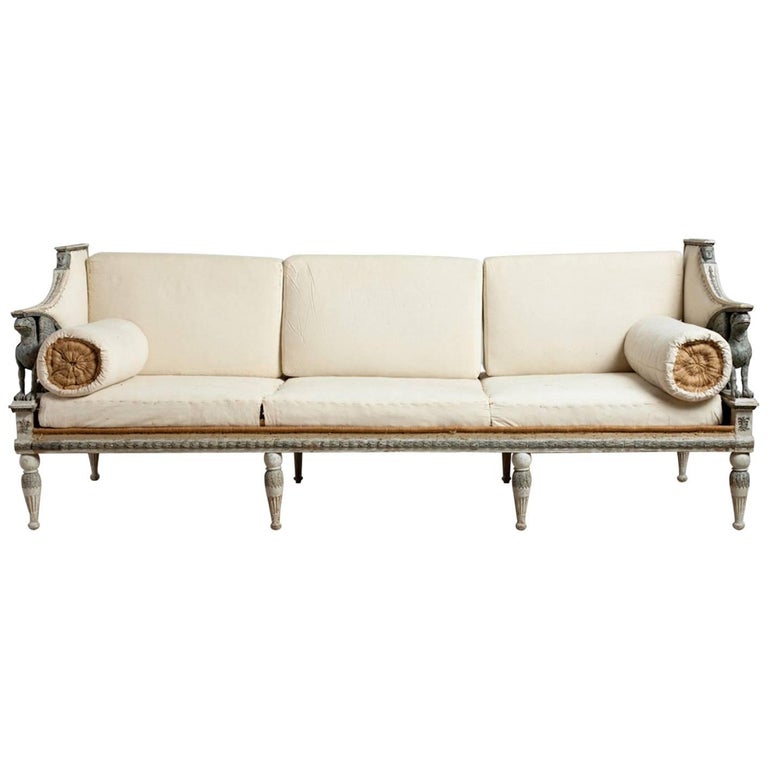 “Ephraim Ståhl, Stockholm master chair maker to the king, was one of the most sought after and revered cabinetmakers in Gustav III’s court, known as among the most ingenious and sophisticated of his time. Almost identical sofas are part of the permanent collection of the Nordiska Museet, in Stockholm.” 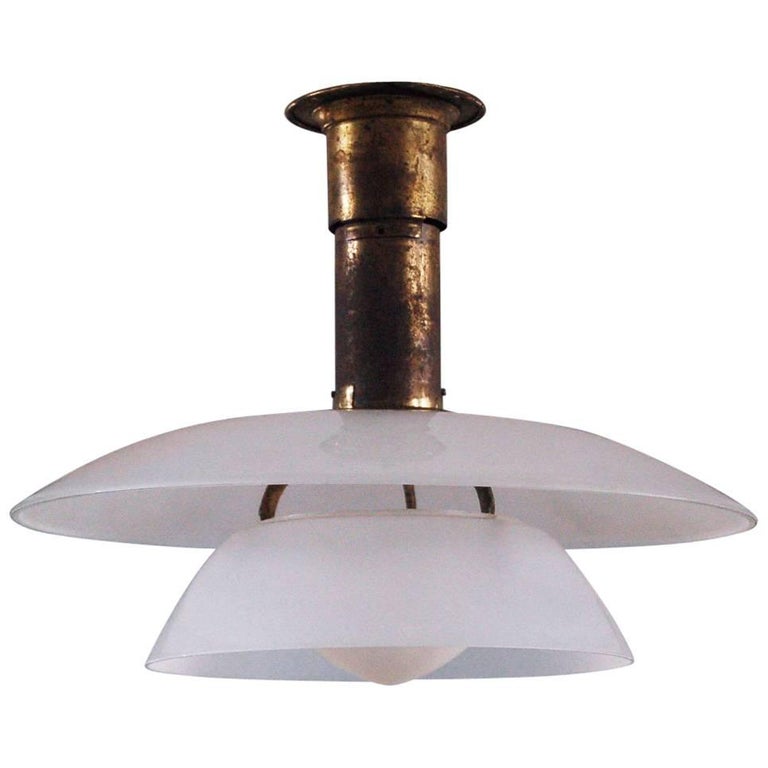 “Poul Henningsen, who is considered the father of modern lighting, was one of the leading figures of the cultural life of Denmark between the World Wars. An architect by training and a writer by profession, he is perhaps best known for his inventive lighting fixtures. This metal frame was the earliest rendition of the later, more malleable wire frame he designed for his patented three-shade lamp system.” 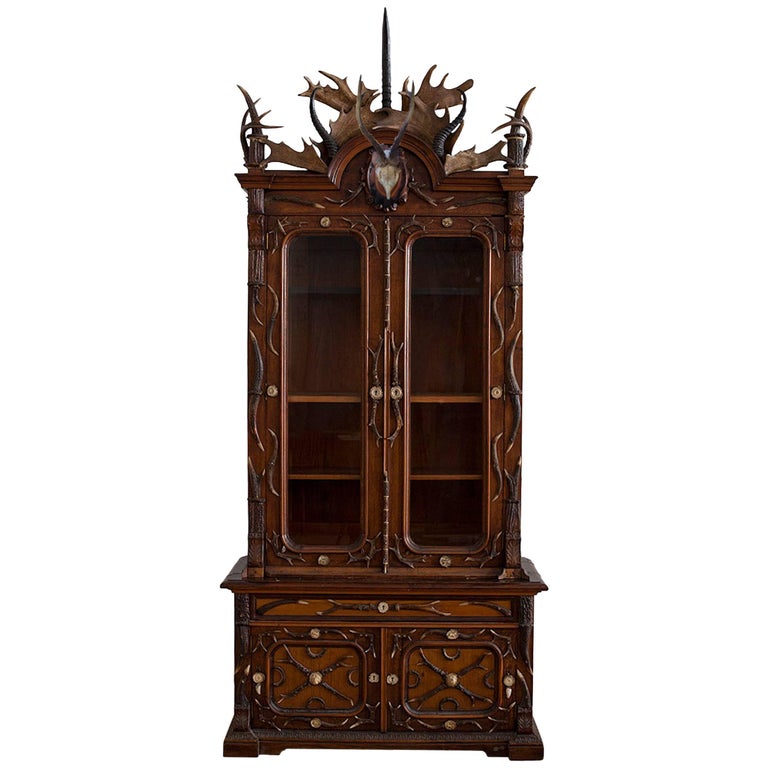 “This extraordinary cabinet was most likely made for a grand hunting lodge. It is of exceptional quality, finely crafted with great attention to the architectural form and proportions of the pieces. It is decorated with original horns from deer and fallow deer and turned horn and moose antlers, and further embellished with carved horn and applied teeth.” 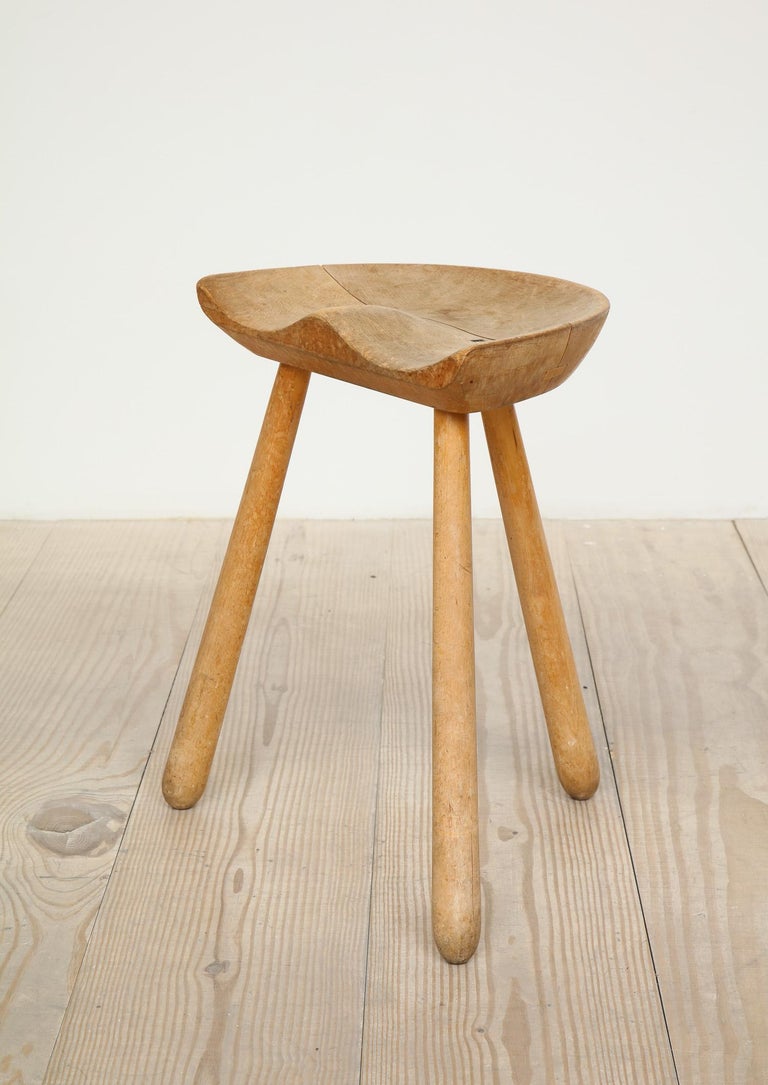 “This is an early production example of the ML42 stool designed by Danish architect Mogens Lassen and made by the Copenhagen cabinetmaker K. Thomsen. Lassen was inspired by shoemakers’ stools of the past and transferred their light elegant look to this sculptural three-legged stool. In addition to its sculptural beauty, it is also extremely comfortable.” 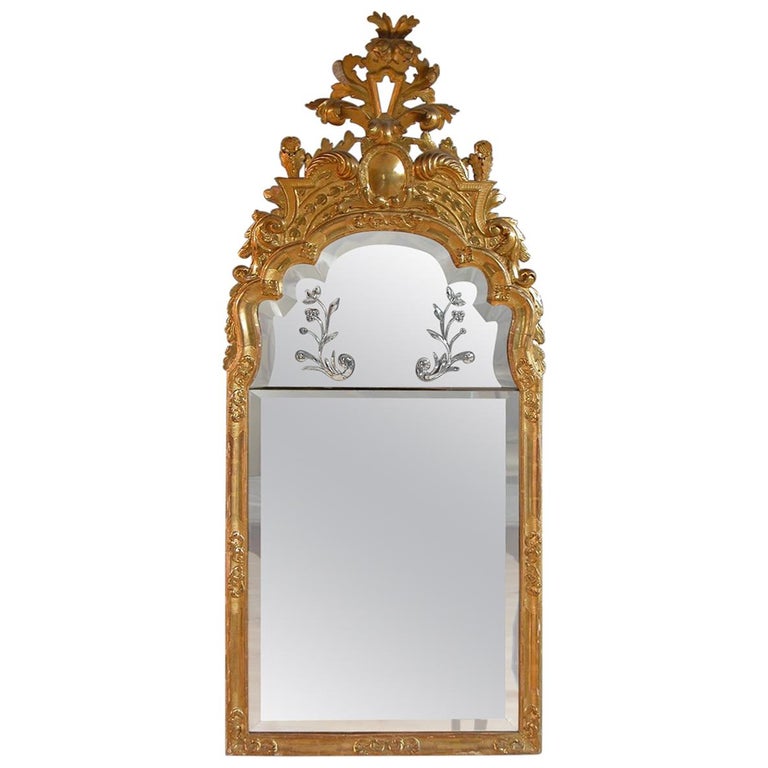 “Mirrors during this period had to be imported, hence the high quality of plate glass. Engraving the glass with an artistic touch, as seen here, was a daunting challenge.”