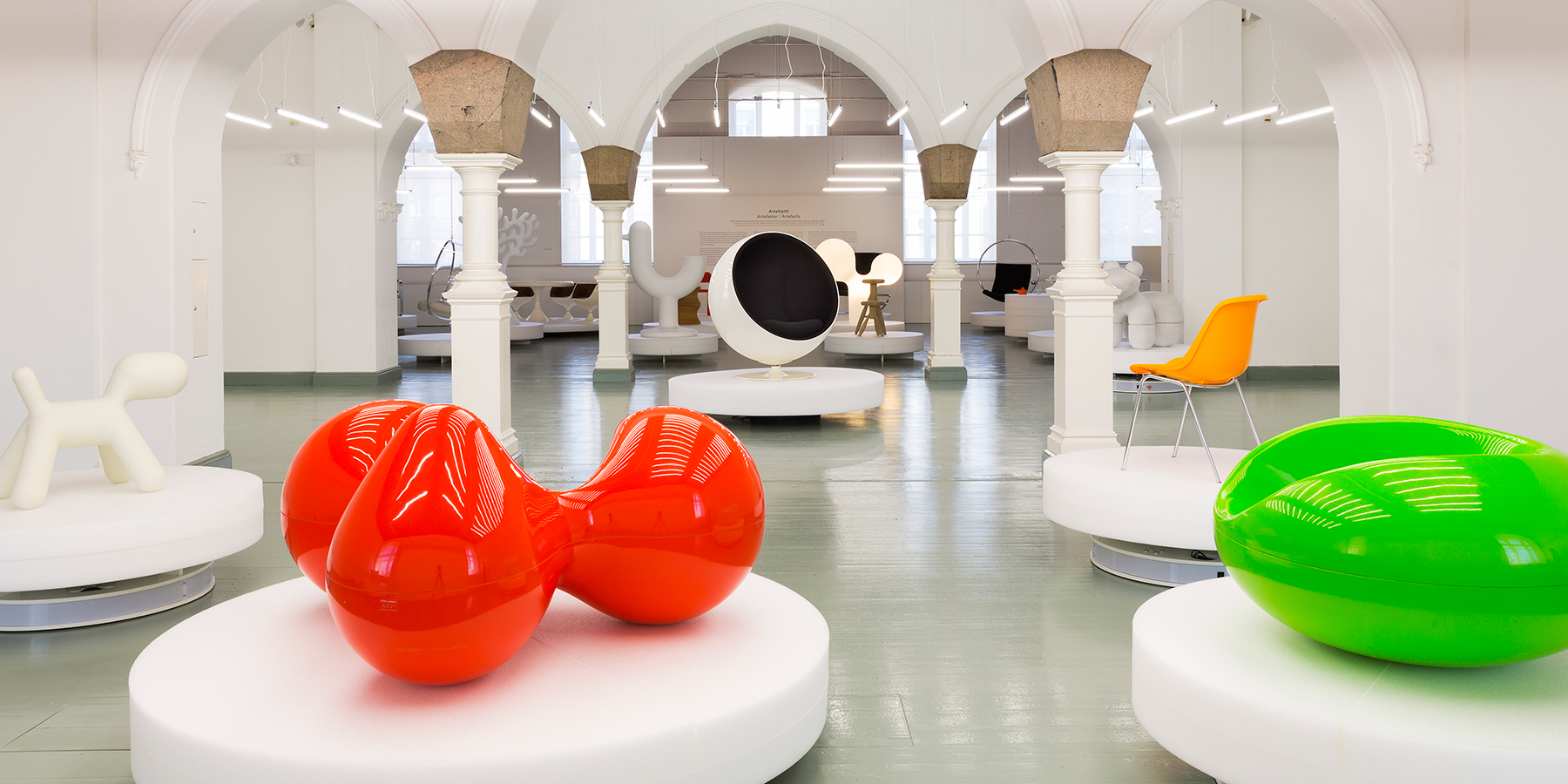 You Know the Ball Chair, Now See His Other Creations 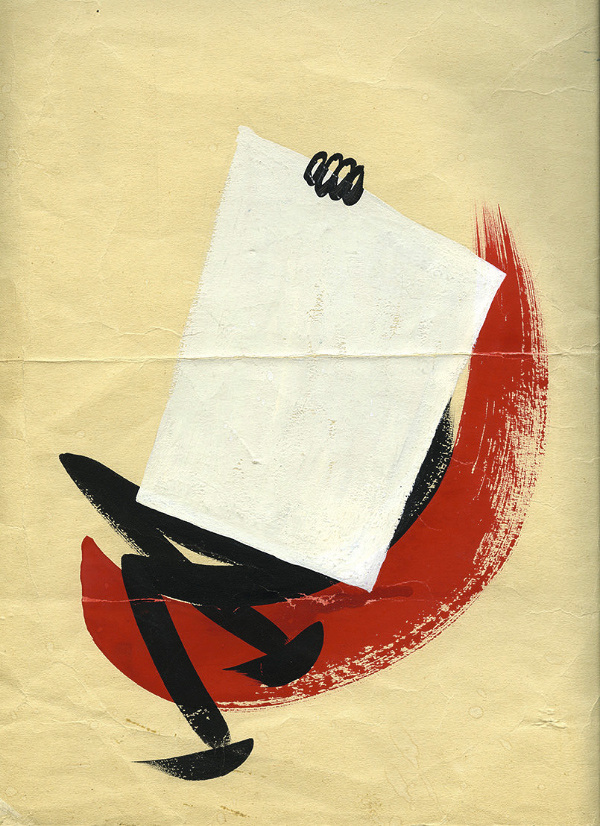 A new show at Helsinki’s Design Museum looks at the work and process of modernist Finnish furniture designer Eero Aarnio, who’s still working at 83. A highlight of the exhibition, his early painting of a figure sitting in a curvaceous seat (above) — completed as part of his design school application — presaged the lines of his most iconic pieces (Photo by Eero Aarnio’s Archive). Top: Aarnio’s famous Ball chair sits center stage in the museum’s high-impact installation. Photo by Paavo Lehtonen

I always look ahead, never back,” Finnish design legend Eero Aarnio has been quoted as saying. A leading innovator of modern furniture design, Aarnio has long embraced a bold, playful, confident and colorful style several steps ahead of his time. For his 1954 entrance test for the Institute of Industrial Arts in Helsinki, he created a whimsical painting of a man reading a newspaper in a red, curved chair whose silhouette foreshadowed his Ball chair of 1963. That spherical seat skyrocketed him to design fame, and more than 50 years later, it is still recognized as one of the world’s most futuristic designs.

Both the chair and the original painting are now on view at the Design Museum in Helsinki in the most wide-ranging retrospective of the 83-year old designer’s work and process to date. “We wanted to offer a comprehensive look into Aarnio’s oeuvre and design thinking,” says the museum’s chief curator, Suvi Saloniemi. “We also wanted to highlight his significance today. He has remained one of Finland’s most acclaimed designers.”

Comprising furniture, photographs, rare sketches and production paraphernalia, the exhibition, straightforwardly titled “Eero Aarnio,” is part of the Design Museum’s series of solo shows devoted to significant Finnish designers, among them Ilmari Tapiovaara, with whom Aarnio trained while completing his studies. The items on display were sourced from various collections, including Aarnio’s own, and from manufacturers with whom he has collaborated  over the years. Along with his wife, Pirkko, and their two daughters, Rea and Marja-Leena, who have always played a significant role in his studio, Aarnio and his “vast, well-organized archive” were integral to putting the show together, Saloniemi says. 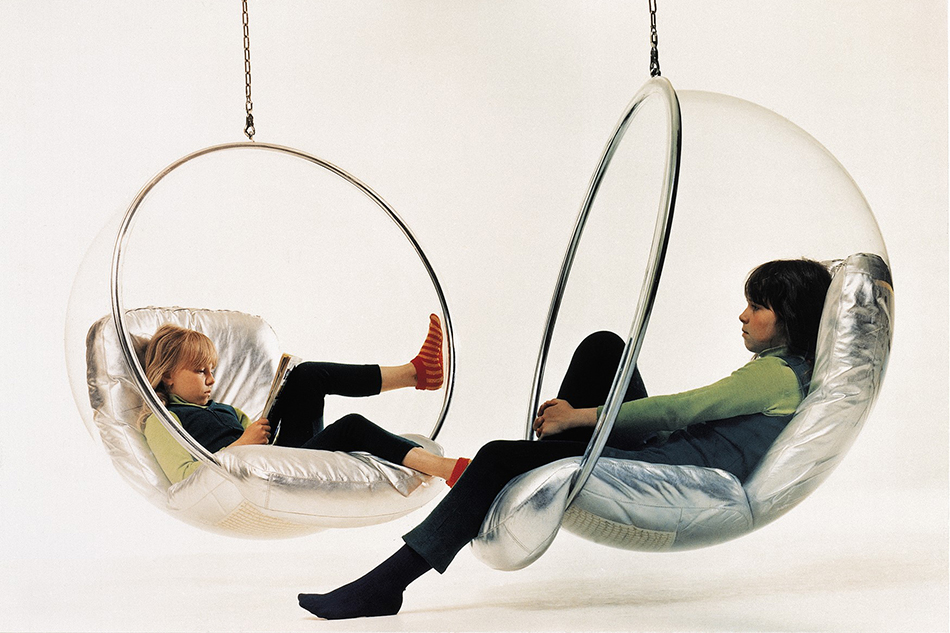 Aarnio’s daughters, Rea and Marja-Leena, hang out in two of the designer’s Bubble chairs, 1968. Photo courtesy of Eero Aarnio’s Archive

Aarnio designed the fiberglass Tomato chair in 1971 and Artekno began manufacturing it in 1972. 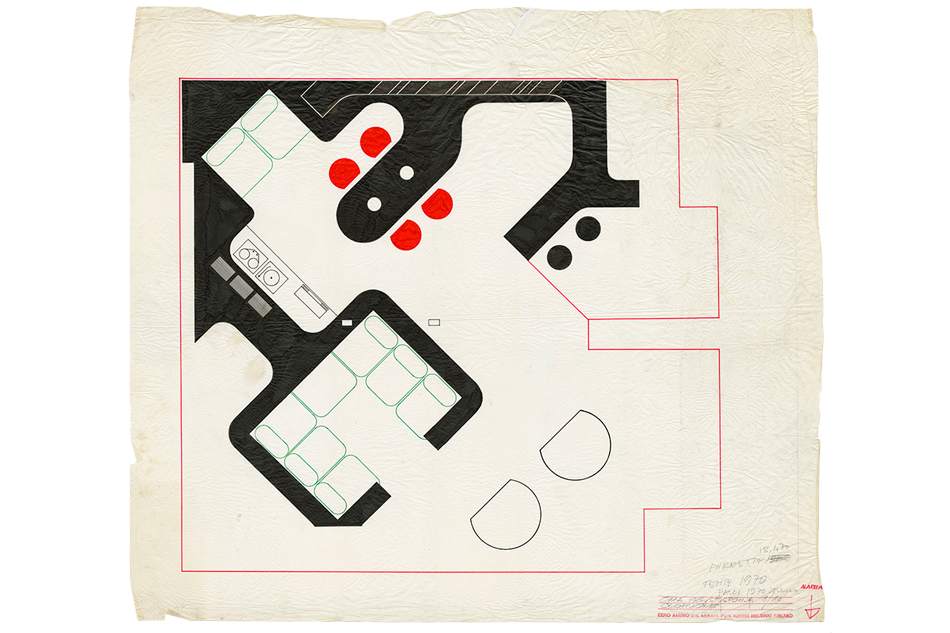 You Know the Ball Chair, Now See His Other Creations
1/4
View Slideshow 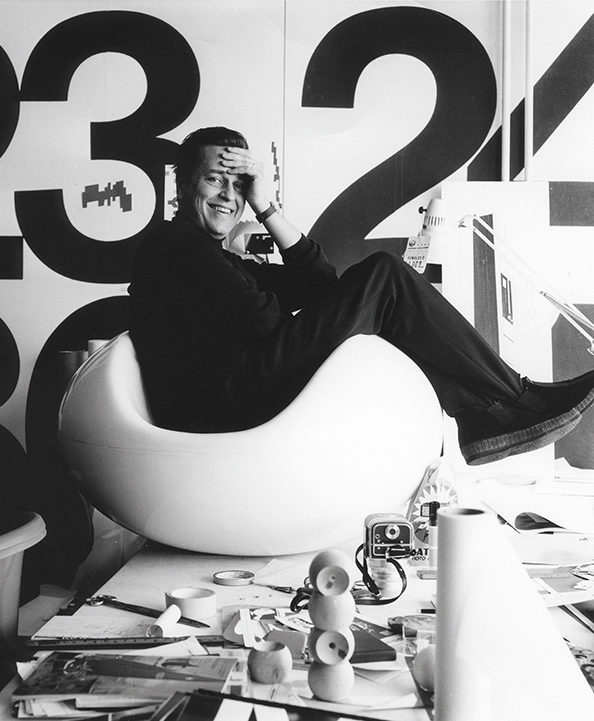 Aarnio poses in one of his Pastil chairs in his studio in 1968. He created the piece with the same dimensions as the Ball chair after realizing that the latter’s interior was so dark that it was hard to read a book while inside it. Photo by Pirkko Aarnio

The exhibition “was such a huge undertaking,” Aarnio tells Introspective. “Just gathering all the information and materials from my work spanning the last sixty years of my career was quite a detective project.”

Born in 1932 to a house painter and a seamstress, Aarnio has always had a cheerful disposition and an independent spirit. He went his own way early on: After just two years at Asko, the furniture company that originally produced his Ball chair, Aarnio established his own studio in 1962.

Over the next decade  the young visionary made an indelible mark on the world. Open-minded and entrepreneurial, Aarnio embraced the aesthetics, materials and technologies of the Swinging Sixties, working with a new generation of plastics and molding them into fluid, organically shaped, brightly hued forms.

“Aarnio expanded the whole idea of what constitutes furniture,” Saloniemi says. “His significance as a designer is crystallized in the liberation of form that he has introduced by discovering the properties of plastic as the material of a designer. His furniture is sculpture-like and eye-catching, but the pieces are always utilitarian at the same time.”

Introduced at the 1966 Cologne Furniture Fair, the pod-like fiberglass Ball chair soon adorned the homes of movies stars and royalty, graced magazine covers around the world and was featured in films and ads. Yet this designer of the future, as he was known in the 1960s, has always insisted that he didn’t deliberately seek to be associated with the decade’s sci-fi aesthetic.

Aarnio embraced the aesthetics, materials and technologies of the Swinging Sixties. 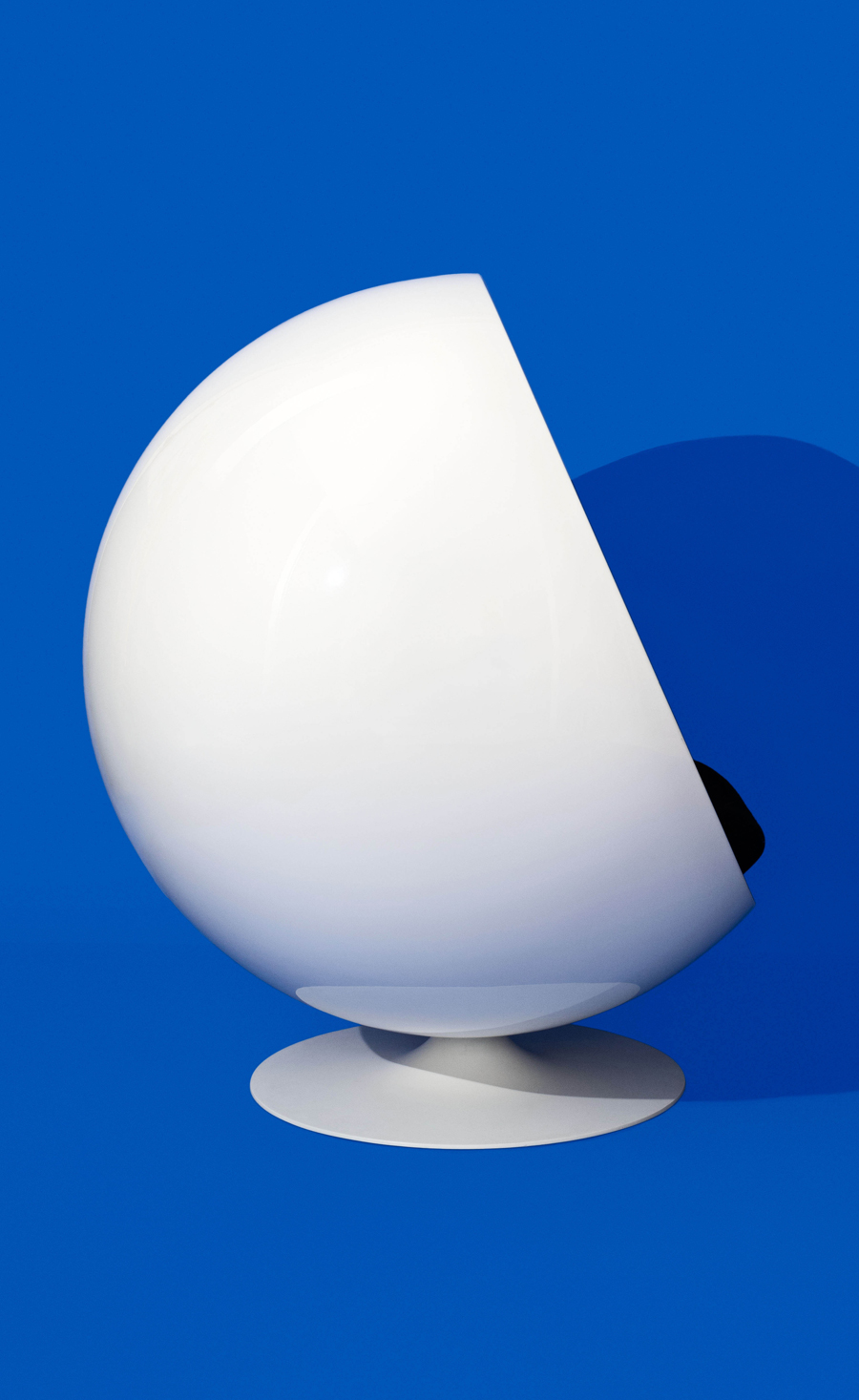 Aarnio debuted the Ball chair at the 1966 Cologne Furniture Fair; it went on to make his name and define his career. Photo by Carl Bergman

“I had no intention to create either Pop or space age design — as many people label my work,” Aarnio declares in one of the essays included in Eero Aarnio — Designer of Colour and Joy, a book jointly created by the Design Museum and publisher WSOY to accompany the exhibition. “My design does not come out from outer, external influences. What is relevant to me is my inner world and my imagination. The Ball chair was and is just an ideal form that I was researching at the time. My intention was purely functional, to create the most practical form for this new material.”

Occupying the museum’s main galleries  and on view through September 25, the exhibition is organized around five themes. “Artefacts,” the heart of the show, displays 28 of Aarnio’s objects including his iconic Ball, Pastil (1967), Bubble (1968), Tomato (1971) and Pony (1973) chairs. These are joined by lesser-known objects like the rattan Juttujakkara, or mushroom, stool (1960); the sculptural Double Bubble lamp (2000), with which Aarnio first explored the possibilities of rotation-cast plastic; and the three-legged Rocket (1995) and Baby Rocket (2006) stools, both parts of a collection produced by Artek after Tom Dixon, the company’s creative director from 2004 to 2009, discovered the original piece in Aarnio’s kitchen. “The selection on show illustrates not only the wide range of his output but also his capability for renewal over the course of a long career,” Saloniemi says.

The “Time” section is biographical, with photos of world-changing events, such as  World War II and the 1970s oil crisis, and notes about their effects on Aarnio’s career. “Mind” brings to life Aarnio’s personal world through images, objects and possessions representing his home studio and family. Aarnio says he appreciates “the attempt to visualize my creativity and the world and environment where I live and work.” 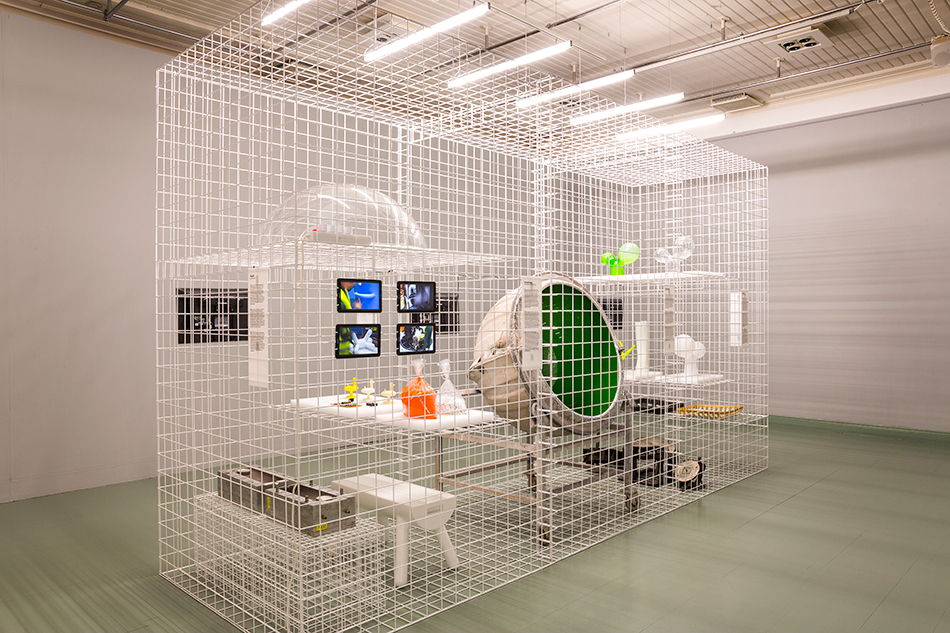 Divided into five sections, the Design Museum exhibition will remain on view through September 25. The “Artefacts” section displays 28 of his objects. Photos in this slideshow by Paavo Lehtonen 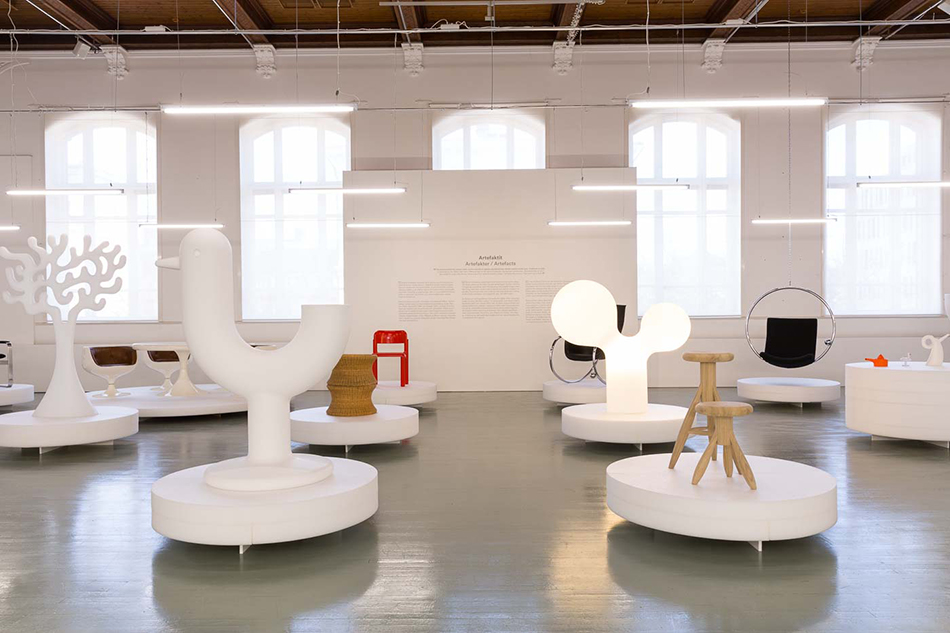 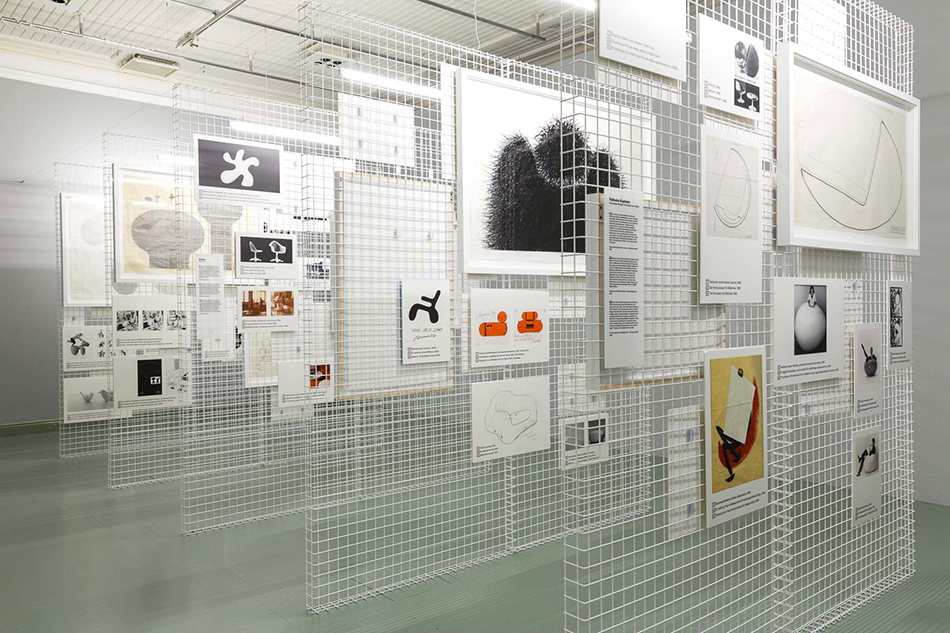 Among other drawings and ephemera, the show’s “Process” section contains rarely seen preliminary sketches of the Pastil and Bubble chairs. 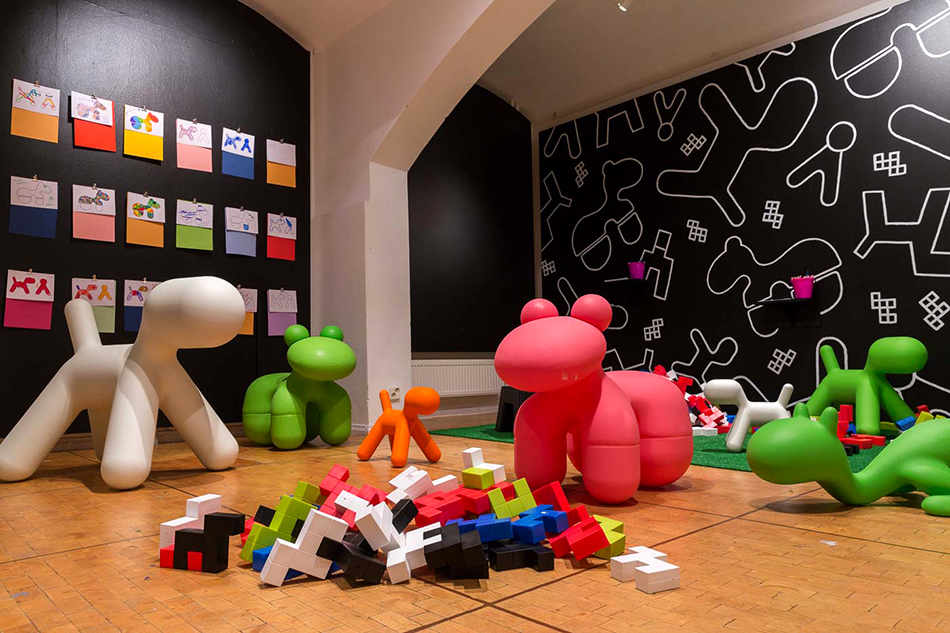 Separate from the exhibition, the Design Museum created a space where kids (and the young at heart) can have hands-on interactions with some of Aarnio’s more playful pieces.

You Know the Ball Chair, Now See His Other Creations
1/4
View Slideshow 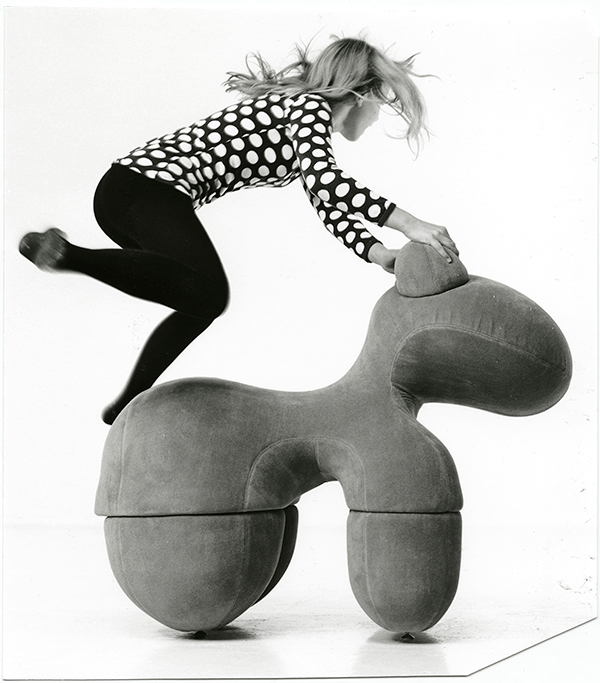 Aarnio’s daughter Rea gets playful on a Pony, 1973. Photo by Studio Pietien

With rare first sketches of the Pastil and the Bubble chairs, “Process” charts his methods and career progression. “The working of ideas by hand, quick sketching on sheets of A4-sized paper and the making of prototypes are all elements of his typical design process,” Saloniemi explains. “In most cases, he proceeds from solving a functional improvement to a product.” The Ball chair, for instance, led to the Pastil, which, matching the Ball’s internal measurements, was transported to the 1968 Cologne Furniture Fair inside it. Made from transparent acrylic, the Bubble was Aarnio’s solution when he discovered it was too dark to read inside the Ball chair.

With Aarnio’s deep understanding of manufacturing processes in mind, “Production” contains molds, materials and prototypes, including his playful Duck Timer (2013) for Alessi, which replaced the usual alarm sound with a quack. There are also process videos “demonstrating that high-end plastic products require both machinery and human craftsmanship,” says Saloniemi.

Through its wide range of displays, the show makes more than clear the thesis laid out by Design Museum director Jukka Savolainen in the prologue of the book: “Aarnio’s playful spirit, uncompromising sense of form and his desire to create new things still leads him on, at the age of 83, with a force and power that a younger generation can only try to learn from.” This retrospective goes a long way toward furthering that education.