Modernist Pioneer Eileen Gray Finally Gets Her Due 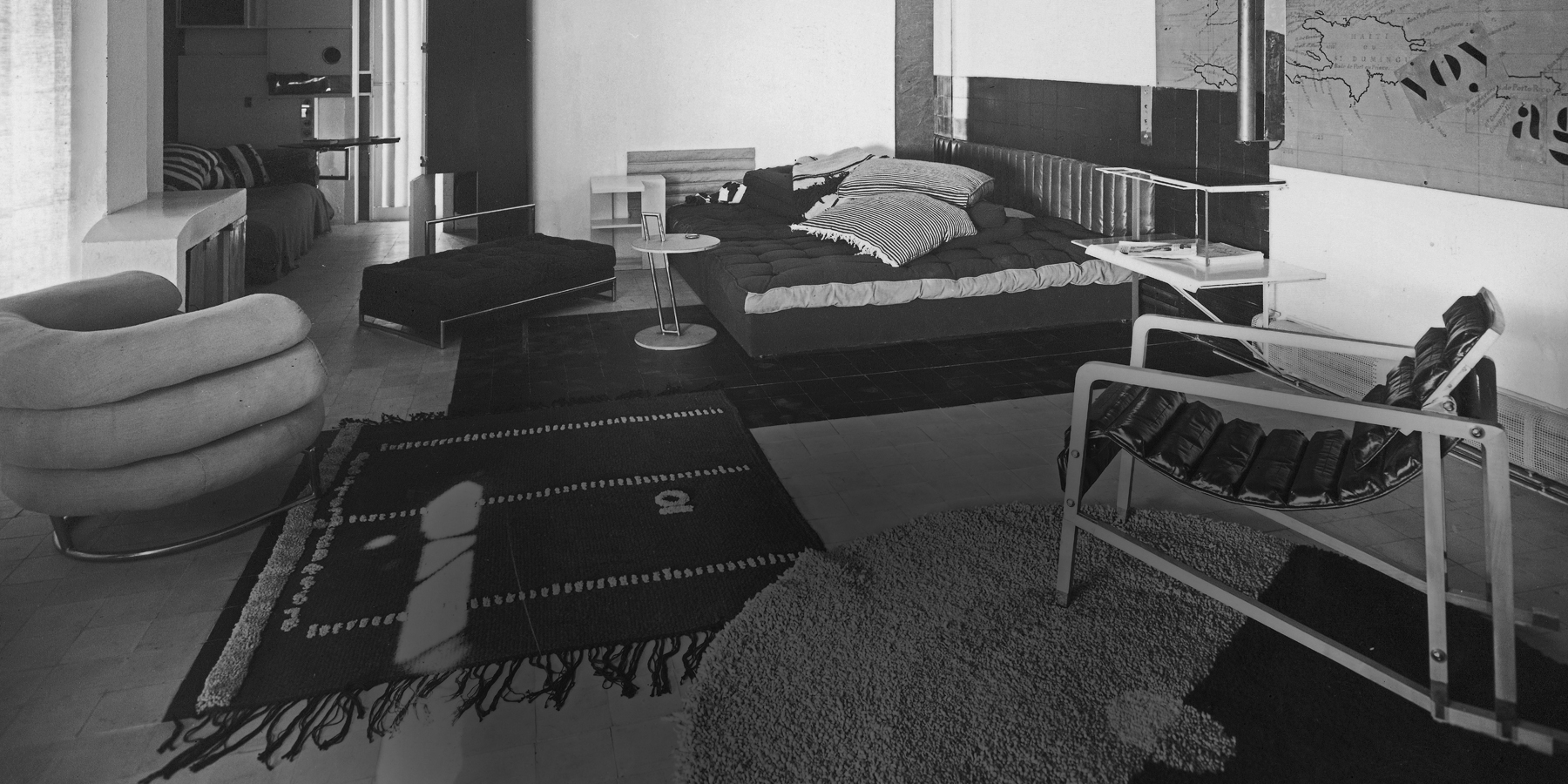 The forward-thinking architect and designer has gotten her first career retrospective – nearly 40 years after her death. 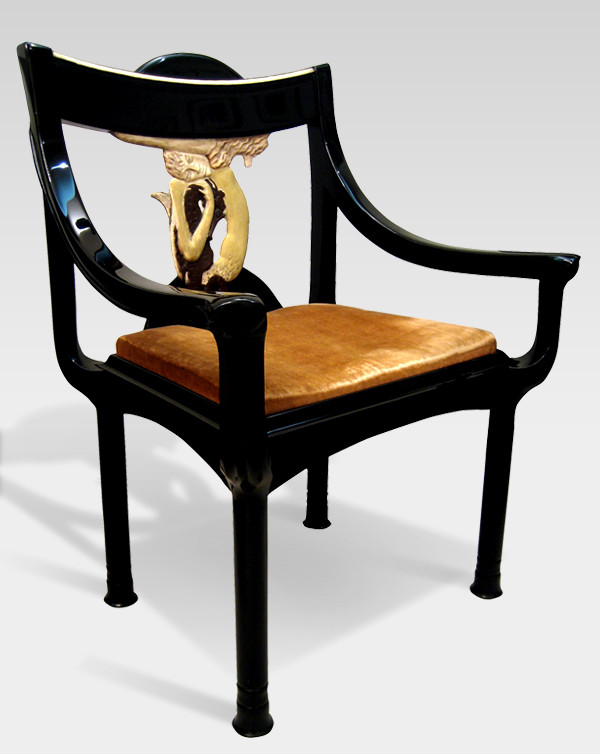 March 27, 2013The furniture designer and architect Eileen Gray — whose Sirène chair, ca. 1919, is pictured here — is the subject of a retrospective at Paris’ Centre Pompidou, through May 20. Photo by Anthony DeLorenzo Top: A view of the living room of E. 1027 shows Gray’s Bibendum and Transat chairs, her Ajustable table and rugs she designed with abstract motifs.

Irish-born Eileen Gray is one of the most intriguing figures in the history of French decorative arts. A one-time toast of le tout-Paris during the 1920s — Elsa Schiaparelli and Philippe de Rothschild, among others, snapped up her work — Gray faded into obscurity in the 1930s. But then in 1972, the auction of Gray’s client Jacques Doucet kick-started the Art Deco renaissance, and in 2009, Gray’s name dramatically resurfaced when her Dragons chair sold in Paris at the epic Yves Saint Laurent-Pierre Bergé auction for $28.3 million, shattering the record for 20th-century design.

Brought up between her well-off family’s manor in County Wexford, Ireland, and a London residence, Gray (1878–1976) moved to Paris in 1906 to pursue the artistic life. As an artist and furniture designer, her Art Deco lacquer work broke new ground, artistically and technically. Then, as an architect, her modernist masterpiece, the elegant white villa in the South of France called E 1027, drew praise from Le Corbusier himself. Over the course of seven decades she created an astonishing range of projects — paintings, lacquers, rugs, furniture, photographs, architecture — while challenging notions of material, form and symmetry.

Ultra-discreet and independent, both of mind and means, Gray always operated somewhat as an outsider, which could partly explain why she is only now getting her first retrospective. On view at the Centre Pompidou in Paris through May 20, the exhibition encompasses all aspects of her 70-year career, assembling rarely seen pieces that are usually out of sight in private collections. Highlights include a lacquer room with such emblematic pieces as the exquisite Sirène chair, circa 1919; the red Chariot table, circa 1915; and the stunning Brick screen, circa 1919–22, as well as modernist icons created for E 1027, such as the Ajustable table, 1927, and the Transat armchair, circa 1926–29. Rounding out the show is a wealth of drawings, photographs, rugs, architectural models and more.

A decade into the 21st century and more than 35 years after her death, the 20th-century pioneer is at last being fully recognized as an embodiment of modernism, on a par with Le Corbusier and Mies Van der Rohe. Recently 1stdibs’ Jean Bond Rafferty walked the exhibition with its curator, Cloé Pitiot. 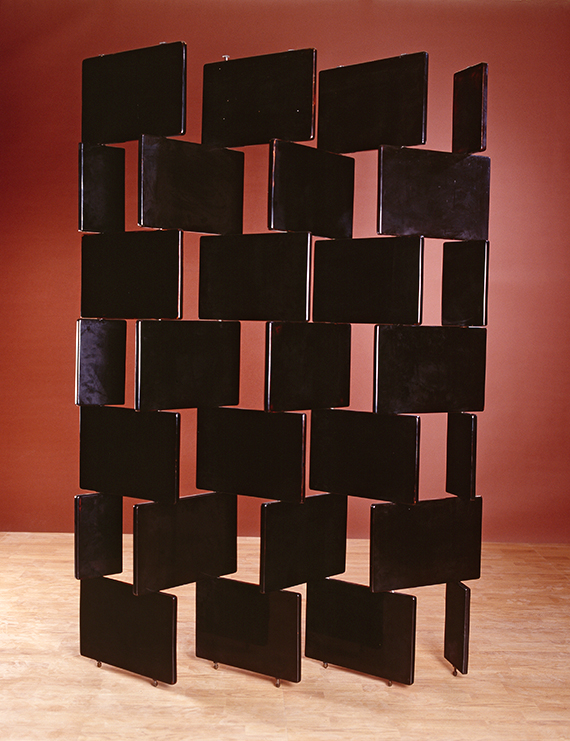 Until now, everyone has divided Gray’s work into two distinct periods, Art Deco and modernism. You have taken a new approach. Can you explain it?

I don’t see a rupture, but an evolution of her work from two dimensions to three. She went from the canvas of her paintings to lacquer panels and rugs, then to furniture and folding screens. Then, she opened up the screens into separate, mobile pieces with the black lacquer Paravent aux briques [Brick screen]. Although for some it’s Art Deco, for me it is the beginning of Gray’s modernity. She was already playing with space, shadows and light. From there, she created interior environments. And then, encouraged by [Romanian architect] Jean Badovici, she went on to architecture and gardens.

In the catalog, Gray’s biographer, Peter Adam, quotes her saying, “The future projects light; the past only shadows.” It seems to have been her motto.

She adored everything that was new. She bought one of the first cars and went up in one of the first planes. It was the same for materials. She used lacquer in the Art Deco period, but worked it like no one else. She invented a new color, midnight blue, from crushed lapis lazuli and encrusted pieces of mother-of-pearl, gold and silver leaf. When something came on the market, like tubular metal or rhodoïd, she adopted it and imagined new things. She loved everything that allowed her to innovate. For me, she was like those adventurous women travelers and early aviatrixes. In the same spirit, Gray discovered new materials and created universes with them.

“She was like those adventurous women travelers… Gray discovered new materials and created universes with them.” 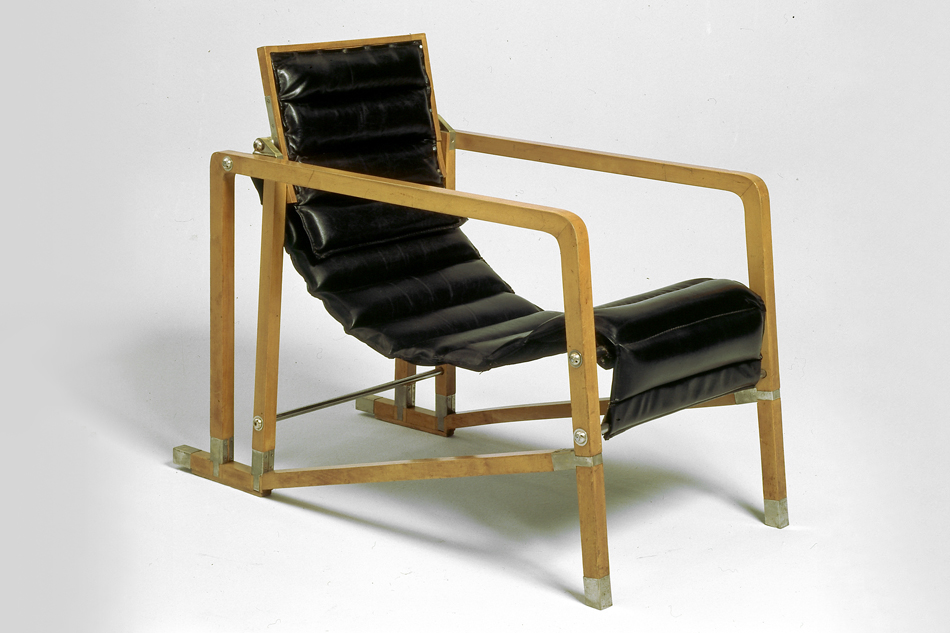 Gray made this version of her Transat chair — one of three in the Pompidou show — for her legendary white villa, E. 1027, in Roquebrune-Cap-Martin. Photo by Jean-Claude Planchet 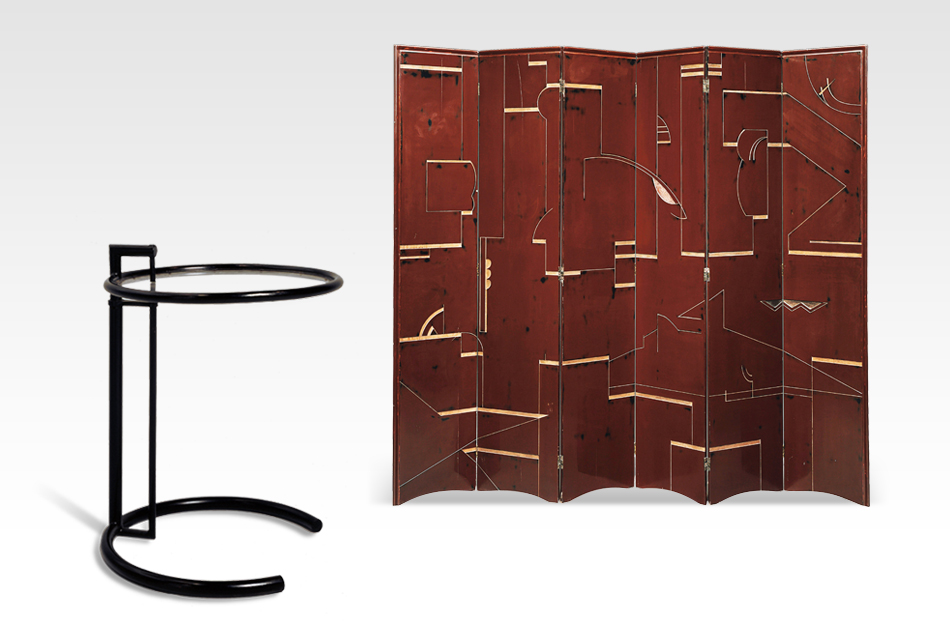 From left: the Ajustable table’s height can indeed be changed. Photo by Jean-Claude Planchet; Gray’s incised lacquer screen, ca. 1925, loaned to the Pompidou by Dr. Stephen Kelly, a 1stdibs dealer and owner of Kelly Gallery in New York (image courtesy of Christie’s) 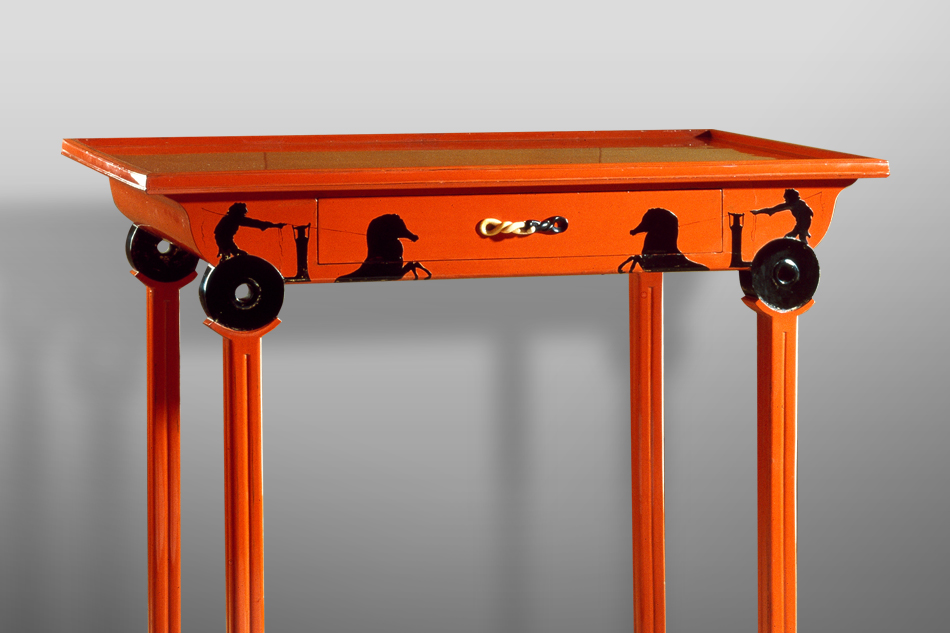 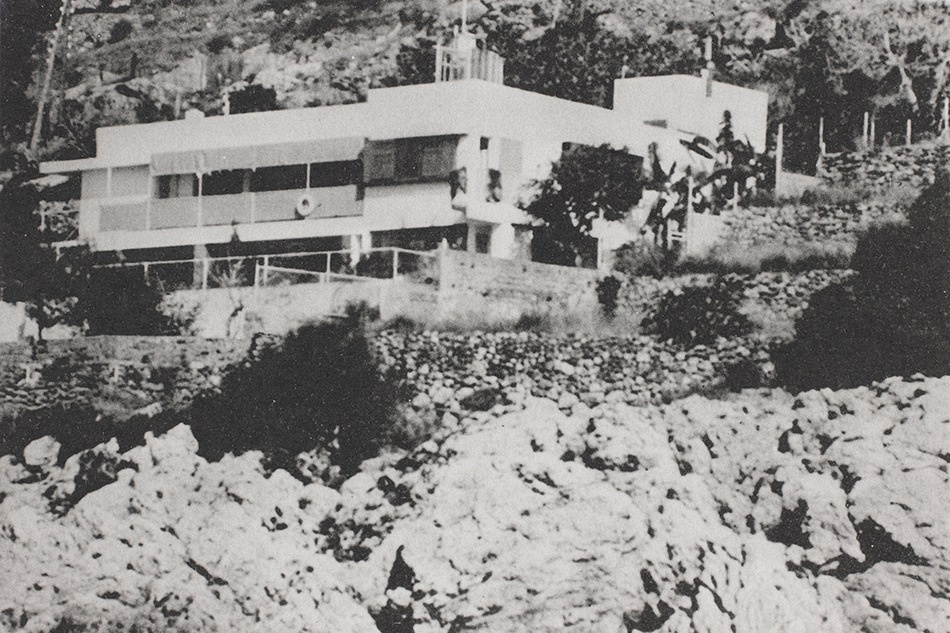 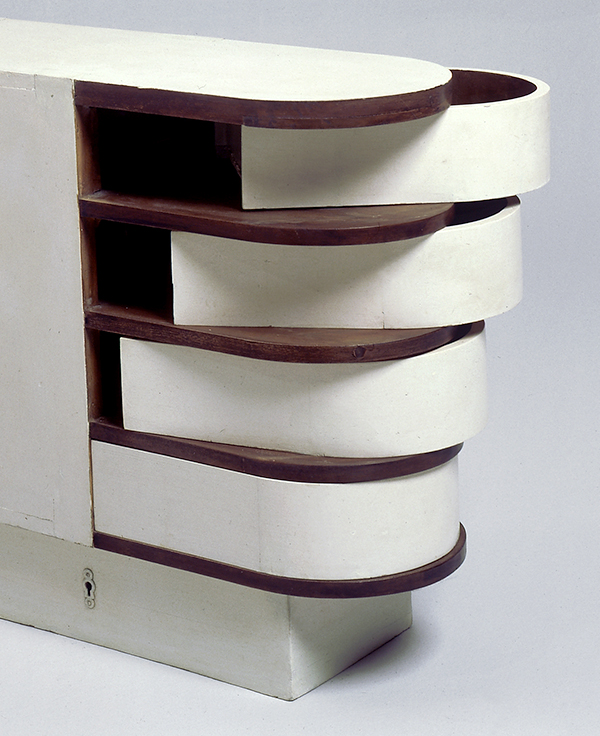 How did you put the show together?

Gray never made more than two or three versions of a design, and even when she did, like the Ajustable tables or the Transat armchairs — of which there are three in the show — the arms, the seat material, the tops and the finishes are all different. Repetition didn’t interest her. Most pieces in the show are in private collections, all over the planet. The collectors and gallery owners were wonderful; we located unbelievable things.

Gray’s burgeoning friendship with the architect Badovici — the editor of L’Architecture Vivante who was 15 years her junior — led to their collaborating on E 1027, the minimalist villa in Roquebrune-Cap-Martin. Rumors still swirl about the project. What did you discover?

He introduced her to Le Corbusier and encouraged her to move into architecture. No one knows whether Badovici did the architecture and she created the interior spaces and the furniture. The house was conceived for “a bachelor who loved sport, entertaining his friends and work,” not for a couple. Afterward, she went to Menton and built a house for herself, Tempe a Pailla, in 1931. When I asked Peter Adam why she had sold the second house (to artist Graham Sutherland), he said she had told him, “I love doing things. I hate possessing them.” 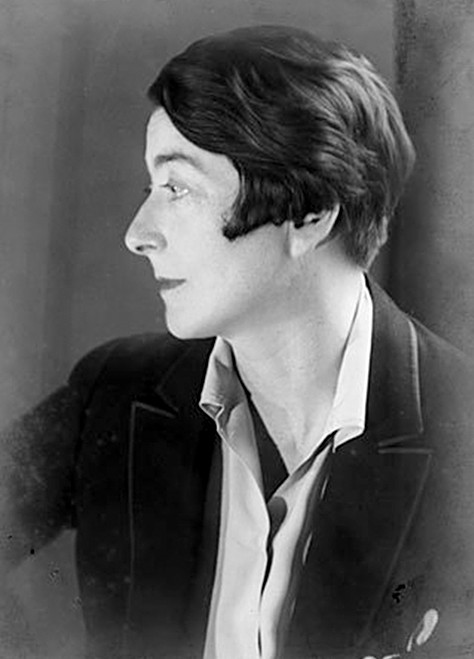 Berenice Abbott photographed Gray in 1926. Courtesy of the National Museum of Ireland

The villa follows Le Corbusier’s modernist principles, but when you look at the large photo of her living room in the show, it seems endowed with a beauty and grace that are Gray’s own.

It’s a manifestation of modernity, but as poetical as it is technical. In her handwritten notes, we found the phrase, “the poetry of an enigma.” That sums up the person and her work. For example, drawers pivot from a low cabinet and lock when pushed back into place, only released by a small button on the back. There were always things to decipher, codes to be cracked. Le Corbusier made many more projects, but Eileen Gray went further in refinement and details.

We don’t know why he did what many people thought was an act of aggression. It’s astonishing, but Eileen Gray seemed to look back at it with a sense of humor. In the portfolio she put together at the end of her life that lists and explains all her art works, furniture and architectural projects, she wrote, “Conception and realization of the Villa E. 1027: Jean Badovici and Eileen Gray. Frescoes: Le Corbusier.”