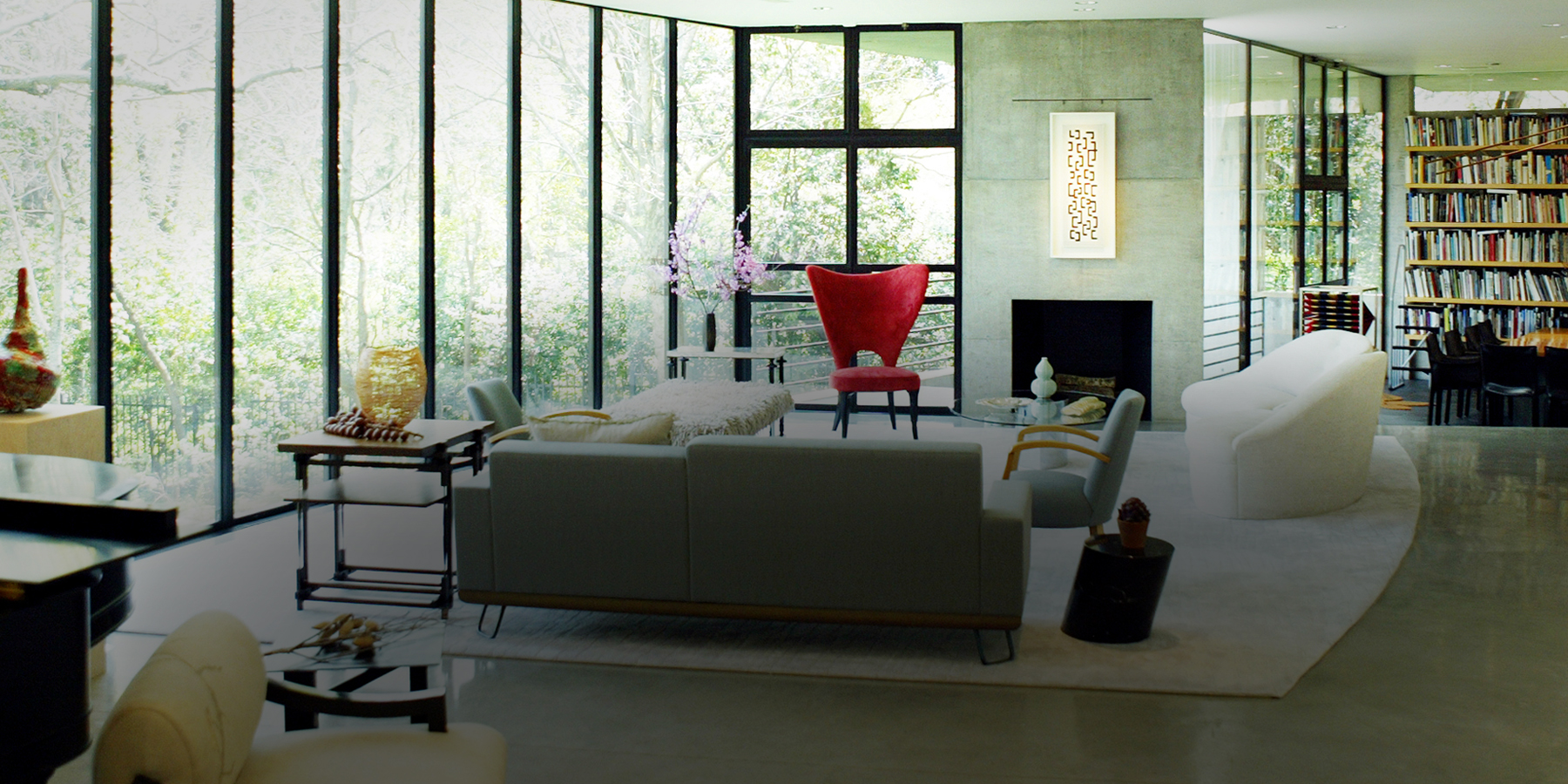 The Dallas-based designer Emily Summers brings an indefatigable energy and a rare modernist sensibility to projects in the Lone Star State and beyond. 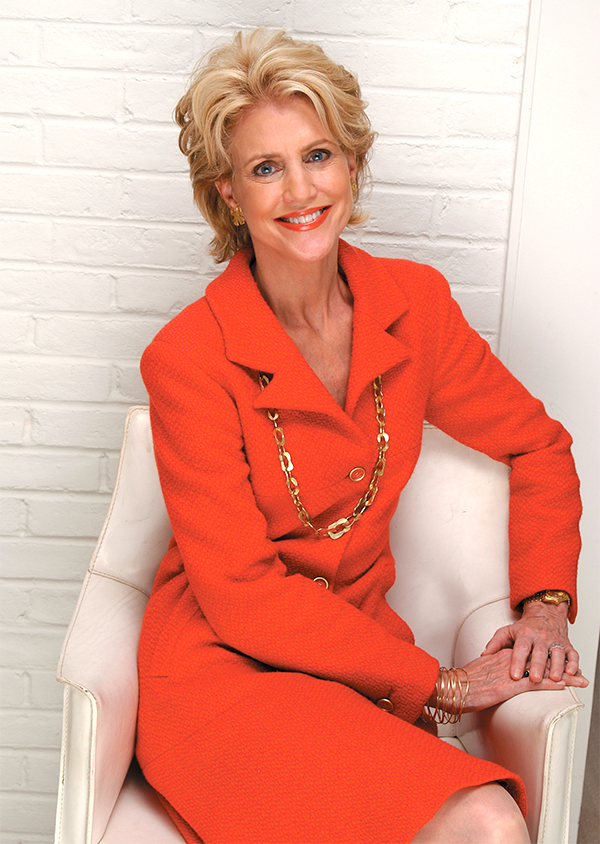 Let’s face it: in the past, when one thought of America’s most sophisticated cities, Dallas, Texas, didn’t leap to mind. But in 2013 a different reality has taken root. Yes, there is the hangover effect from the 1980s: women with big hair, men in cowboy hats and boots, faux chateaux and memories of Dallas and the rapacious Ewings (reignited in part by their return to prime time). But these are exceptions to the new rule.

In fact, it was the mid-1980s when things started changing. I noticed it when the food scene began attracting chefs like Dean Fearing, then at the Mansion on Turtle Creek, and Stephen Pyles of Routh Street Café and Baby Routh. The cultural scene was another indication — not only in Dallas itself, with its much-lauded cultural institutions (the Dallas Museum of Art, the Nasher Sculpture Center and, more recently, the AT&T Performing Arts Center), but in nearby Fort Worth at the Kimbell, the Amon Carter and the Museum of Modern Art.

But if I had to choose just one structure that told me Dallas was redefining itself it would be a private residence built in 1993 in Highland Park, overlooking Turtle Creek. Owned by arts philanthropists Deedie and Rusty Rose, it is not only a brave step into today, it is a bracing dip into nature at its most sylvan.

It looks like no other house in its posh neighborhood. I first saw it on the same night I attended a contemporary art show at the adjacent Pump House, a water-treatment-plant-turned-exhibition-space that is also owned by the Roses. At the time, I was editor in chief of Town & Country and in Dallas for a Neiman Marcus event that the magazine had been co-sponsoring annually. After a couple of years of going to cocktail parties at a plethora of too-fancy-for-words homes with his-and-hers dressing rooms the size of three-car garages, I was longing for some visual relief. 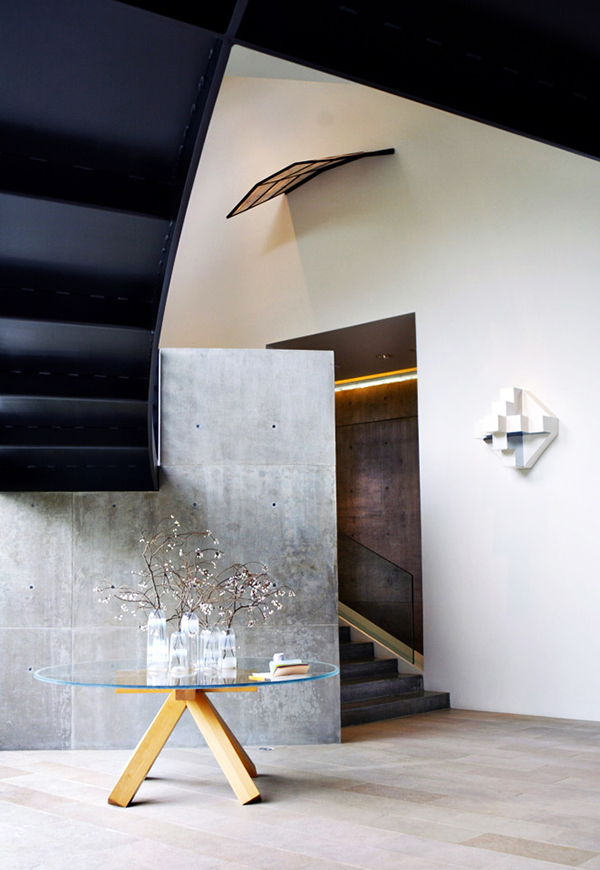 In the foyer of the Roses’ home, Summers’ delicate touch keeps the focus on the space’s dramatic architecture. Photo by Steve Wrubel

It came courtesy of Emily Summers, an interior designer. She stood out in the crowd: a disarmingly pretty blond with short, wavy hair — not a strand of it backcombed — in what looked to me to be a dress designed by Alber Elbaz of Lanvin. Elbaz in Dallas? Right away, I knew that Summers was a woman worth knowing. As it turned out, she did the interiors of the house, which had been designed by noted architect Antoine Predock, and she took me on a tour to see the space right then and there.

I was swept away. The exterior, made of fortress-like blocks, looked more industrial than residential, and yet it was almost invisible from the street. Imagine six levels and 10,000 square feet of concrete, steel, limestone and glass tucked into the landscape as if they belonged there.

Summers next showed me what she had done inside (in concert with Predock and Deedie Rose) to complement the exterior. Everything was chosen with exquisite restraint. The furniture — including a sofa designed by the couturier Charles James — was simple, almost severe. The art (the Roses are ardent collectors) was by well-knowns such as Gerhard Richter, Louise Bourgeois and Sol LeWitt.

I couldn’t get back to New York fast enough to set in motion an article, which was written by Sarah Medford, T&C’s architecture and design editor, and entitled “Light House.”

On a subsequent trip to Dallas, I had dinner at the home Summers shares with her husband, Steve — it’s also modern and light-filled. And as I got to know the designer better, my appreciation for her only grew, as did my fascination. How, I wondered, did this woman born and raised in Kansas City become such a passionate modernist? And how was she able to advance this passion in a city known at the time for it grandiosity? To hear her tell it, Kansas City was a great place for art apprentices, primarily because it is the headquarters of Hallmark, which not only created greeting cards but also provided art classes of all kinds.

At first, Summers describes her teenage self as “just a normal high school student,” but a little probing reveals that she was a member of the National Honor Society, a volunteer for the Red Cross and — this took some teeth-pulling — the “yearbook queen.” Normal, maybe, but hardly average. 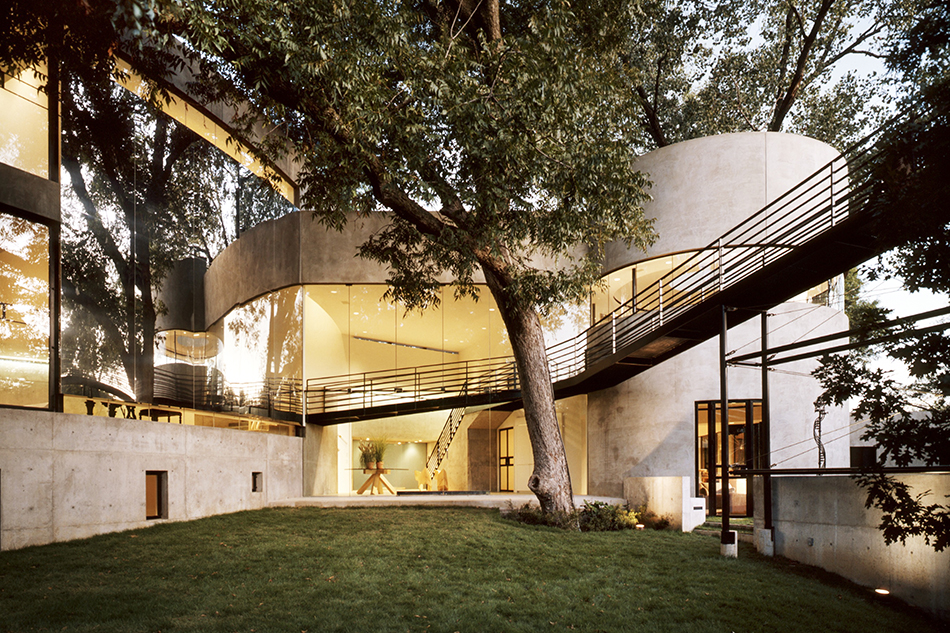 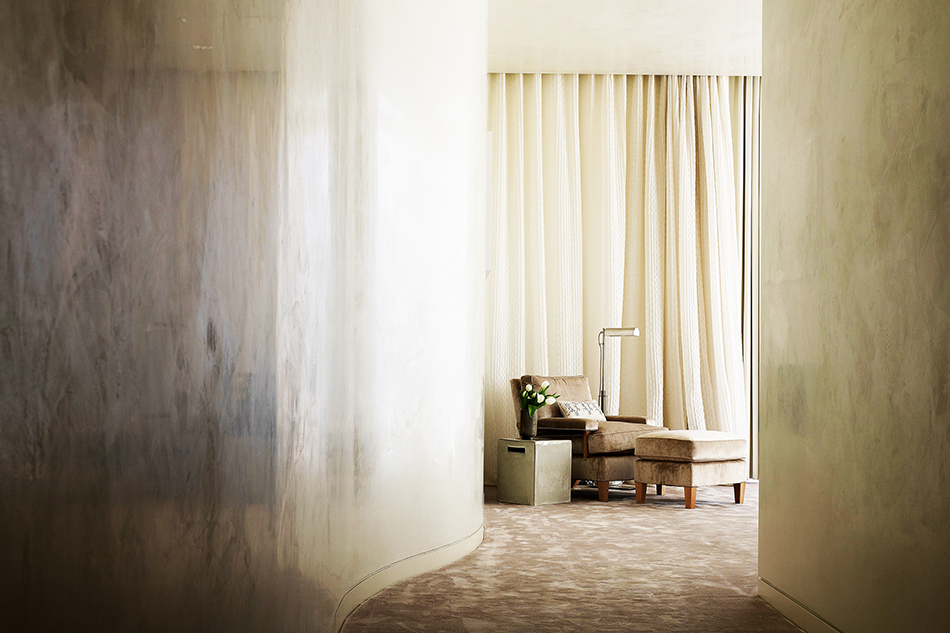 Quiet, gray furnishings meld with the curving entryway to the master suite of a Dallas home. Photo by Stephen Karlisch 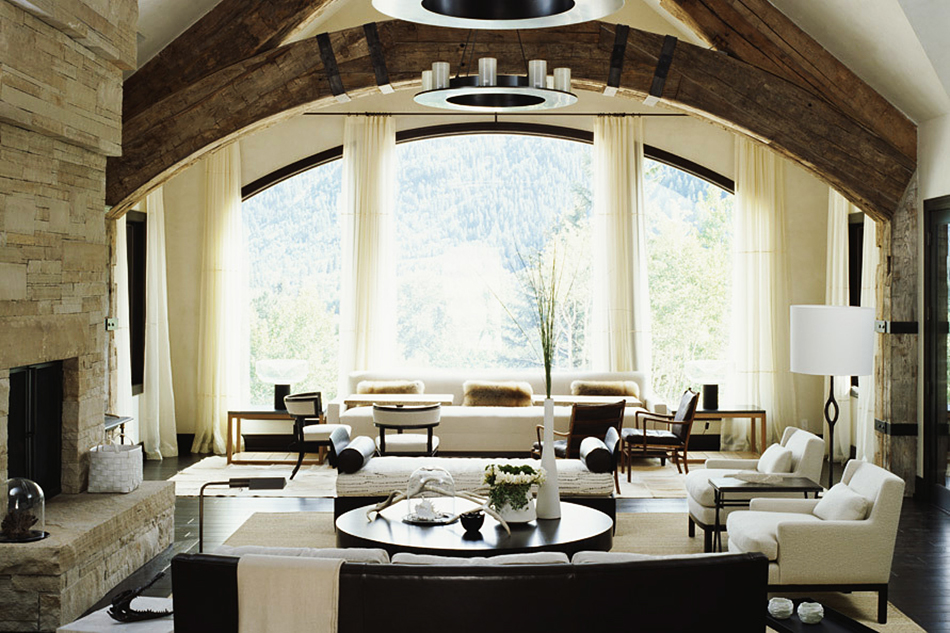 At a home in Aspen, Summers combined a sleek aesthetic with the vernacular architecture and local materials of the Rockies. Photo by John Coolidge 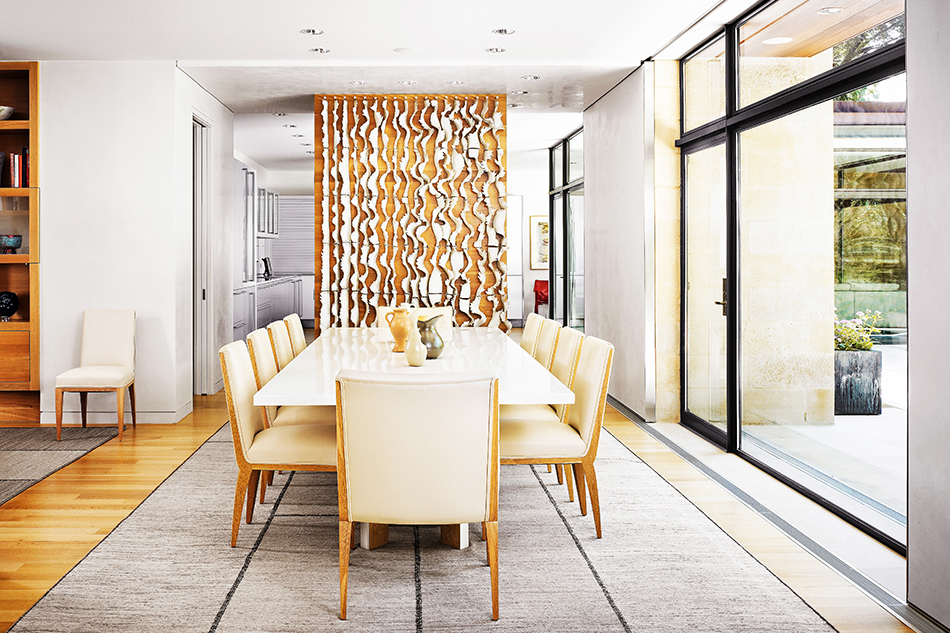 At another Dallas home, Summers commissioned the ceramic wall installation behind the dining room table from artist Anne Barres. Photo by Casey Dunn 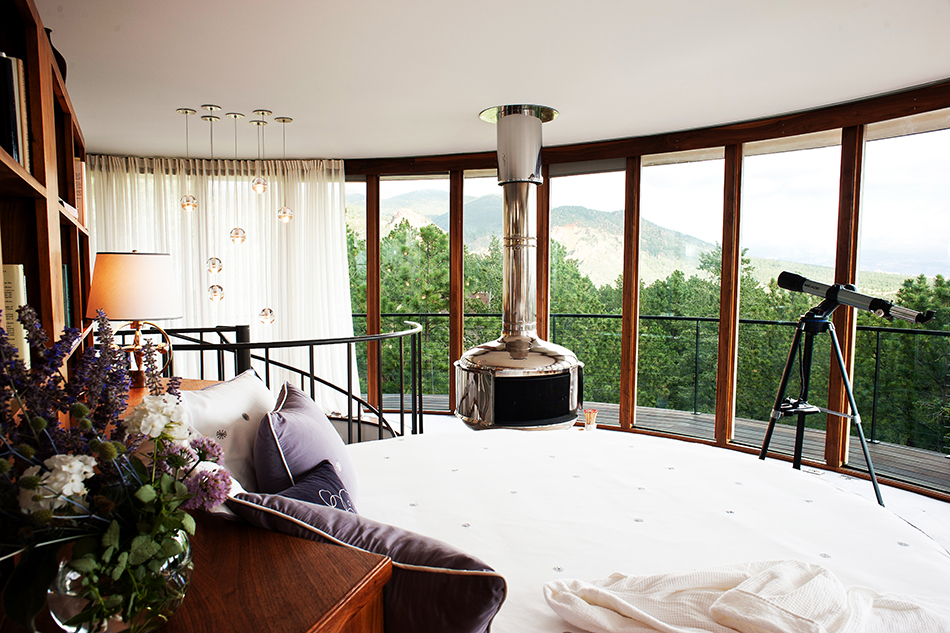 At Round House, the Summers’ home in Colorado Springs, the circular bed in the master bedroom is original to the house’s 1968 design. Photo by Laura Wilson 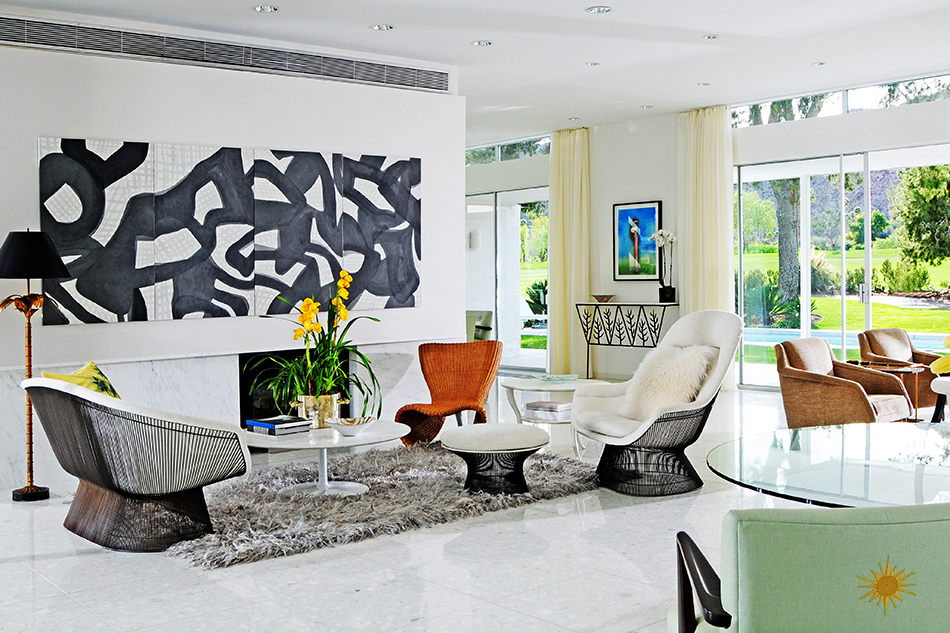 In this Palm Springs home, Summers placed such signature pieces as a Warren Platner steel-wire seating suite and a wicker chair by Marc Newson amid all-white architecture and the clients’ extensive art collection. Photo by Dan Chavkin 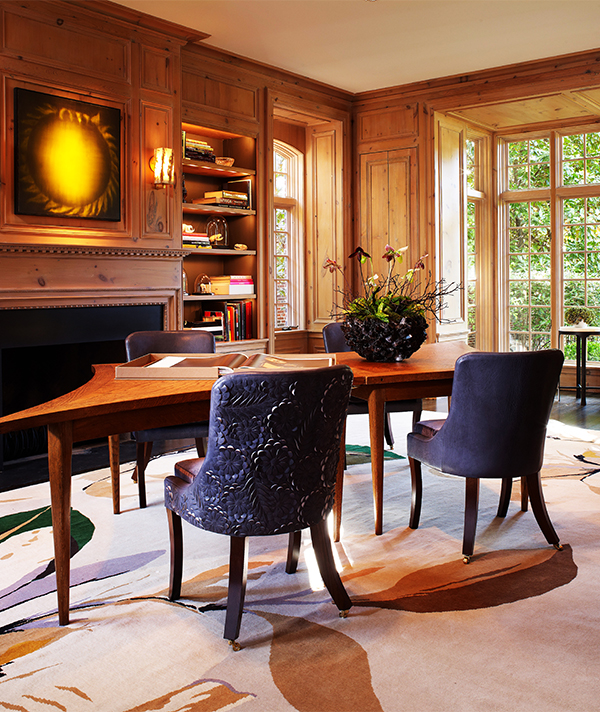 The designer doesn’t eschew the traditional altogether: In this Dallas home library, classic wood paneling provides contrast to the contemporary art and carpet by Vivienne Westwood for the Rug Company. Photo by Stephen Karlisch

A scholarship to Southern Methodist University took her to Texas, and there she stayed, working in the fashion office of Neiman Marcus and striking up a relationship with the legendary Stanley Marcus — known to all as Mr. Stanley.

By this time, she was married to Steve Summers, a hedge fund manager whom she met at SMU. They wed in 1966 and began having children. Between pregnancies (three in all), she also modeled for 10 years.

Her interest in art led to a stint at the Dallas Museum of Art, where she met a fellow docent named Deedie Rose. The two had a great deal in common, above all their cultural curiosity, and they quickly forged a friendship that exists to this day.
Summers’s career as an interior designer began in earnest when she returned to SMU for graduate school, studying art history and design. “My professor, Alexandra Comini, was an expert in 20th-century Viennese art, especially Wiener Werkstätte.” A trip to Austria proved a breakthrough experience for Summers. She became aware of Koloman Moser, Otto Wagner, Josef Hoffmann, Klimt and Schiele, which further led to her interest in Knoll, Mies van der Rohe, Eileen Gray and Jean Royère. “I placed a Royère in one of my first commissions and convinced Deedie to buy a Mies daybed in one of her houses.”

That was a big moment for both women, who until then had been living with traditional furniture left over from their families. Sarah Medford, however, believes Summers is not a modernist in the strictest sense. “She loves clean lines, but it is much more than that,” she explains. “Emily’s a curator of the best in decorative arts, regardless of style or period. And while her work always looks comfortable and of its time, it possesses real cultural resonance.”

Summers started designing interiors in 1979 and has been in business ever since. Her staff is small and the projects have been mostly in the South and West, although lately her direction has turned eastward, to the point where she has opened an office in New York City. 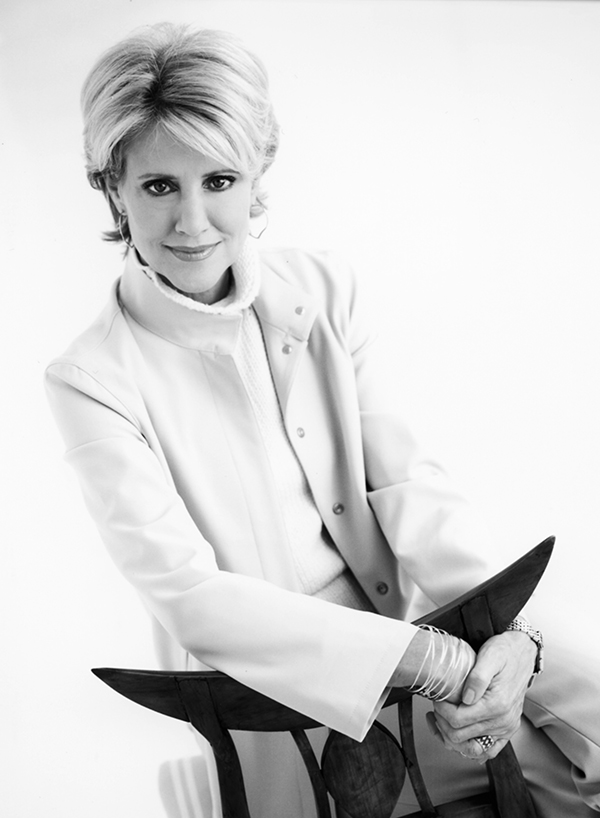 Summers developed her taste for the modern while earning a graduate degree in art history and design. Photo courtesy of Emily Summers

The Summers own three houses — in Dallas, near Palm Springs and Colorado Springs — all built in 1968. (A coincidence? Not likely.) The Colorado Springs house sits above the Broadmoor resort and is called the Round House because it comprises three overlapping round structures built into the side of a mountain and supported by a large mushroom pod. (Sound a little Alice-in-Wonderlandish?) “We fully restored it,” says Emily, “and it is one of my prized projects. No one could ever build it today.”

Initially, Palm Springs was more appealing for avid golfer Steve than for Summers herself. But she soon became involved in the community and its architectural legacy (Richard Neutra, Albert Frey, Paul Williams and Donald Wexler all built there). And what could be more seductive to a designer like Emily Summers than having a home in a place where there is an 11-day event and celebration every February called Modernism Week?

Summers loves the thrill of the hunt and will scour the planet to find just the right whatever for her clients — or for herself. “I’ve never met a designer as indefatigable as Emily,” says Medford. “She will go to the ends of the earth to find the next great object, whether it’s in a warehouse in Milan that all the furniture fairgoers have overlooked or in some Japanese village where they’re still dyeing fabrics according to an ancient technique.”

Her personal style, as you might expect, is no less exacting. Labels of choice include Alexander McQueen, Prada, Narciso Rodriguez, Lanvin and Mary Katrantzou. Mary who? Summers explains: “She is from Greece, works out of London and specializes in digital printing. You should really pay attention to her.”

Of course, I will — for no other reason than that Emily Summers told me to. 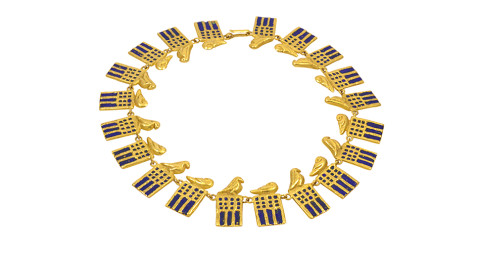 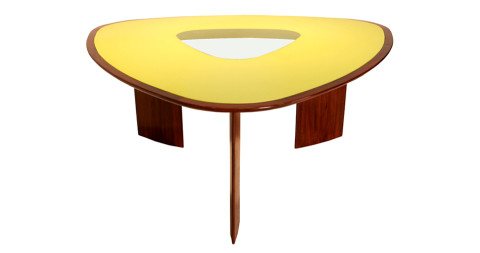 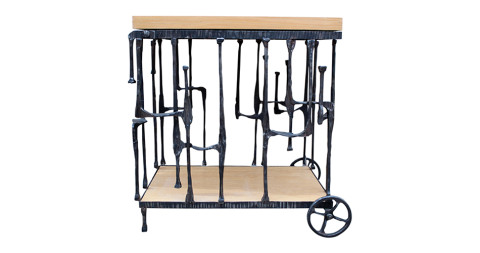 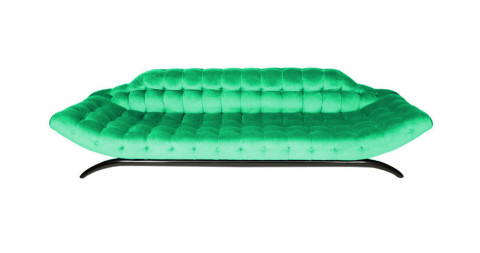 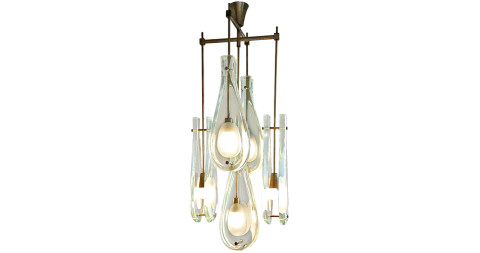 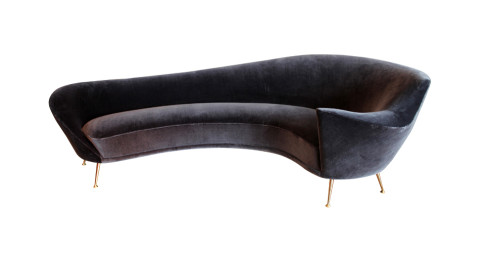