Eric Hughes Went from Hollywood Executive to Designer to the Stars 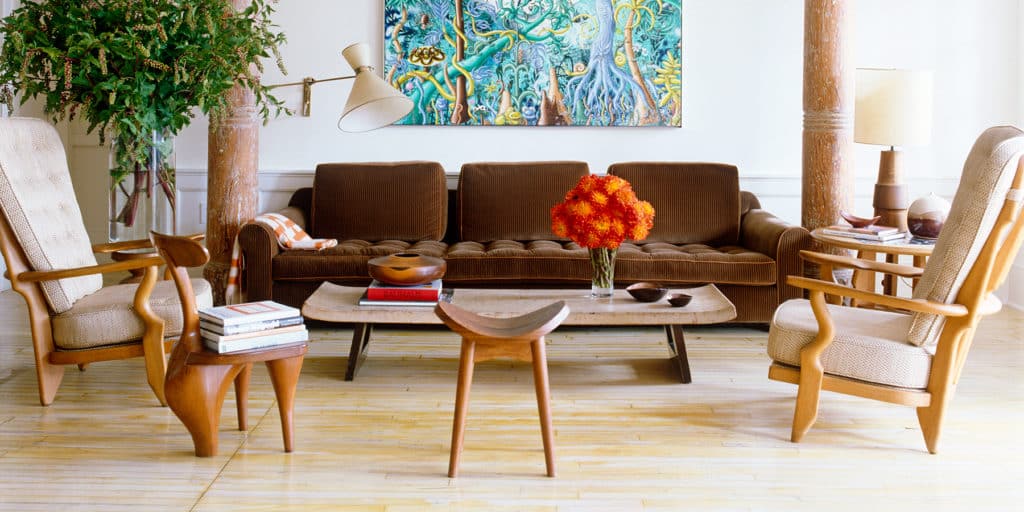 He may have switched careers, but the former studio vice president is still playing a vital role in the lives of show business luminaries. 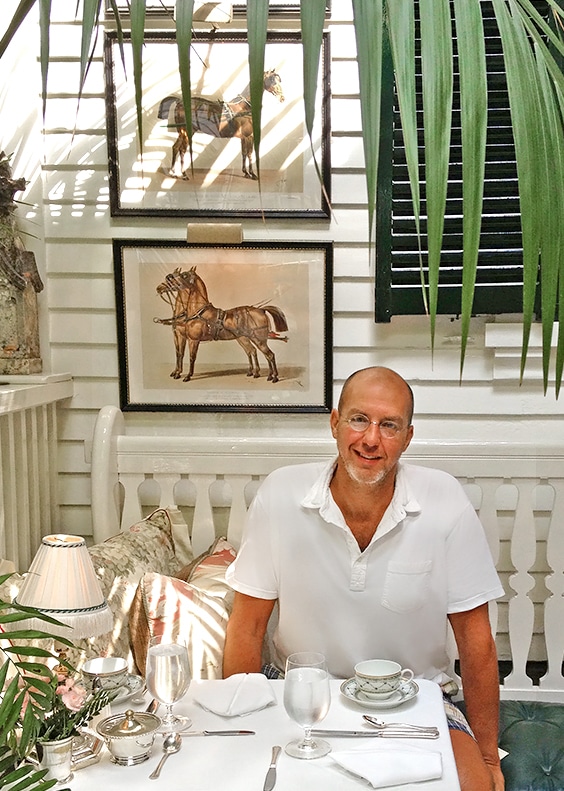 Hollywood loves a good reinvention story, but it’s safe to say that it doesn’t usually involve a studio executive quitting the business to become a decorator. (Actors have made the leap — most notably William Haines, a former silent film star, and more recently, the Santa Monica–based Thomas Callaway.) Still, 17 years ago, Eric Hughes walked away from his position as vice president of production at Universal Studios, and he’s never looked back. Hughes — whose project list includes relaxed, eclectic residences for Sarah Jessica Parker and Matthew Broderick; a spare, elegant loft for Hank Azaria; and an edgy, recently completed Manhattan apartment for talk show host Andy Cohen, featured on the cover of the October issue of Elle Decor — says, “Having had a high-pressure corporate job for a number of years, I wanted something where I could enjoy my life in addition to doing good work.”

For Hughes, who shuttles between offices and homes in New York and Los Angeles (where his partner, the designer Nathan Turner, is based), keeping his office small is essential. “It gives me a lot of freedom. I don’t have to take on a big project, or a client I know is going to be difficult, to feed the machine. I work on a more personal level,” he says. Although Hughes gladly left behind some of the more volatile people he used to work with, “the funny part is that most of my clients are in the film business. I understand the language.”

Indeed, he compares designing interiors to producing a movie. “I use my brain in the same way,” he explains. “You envision the big picture, then the details, as does a producer. I’m just producing a different kind of picture.” 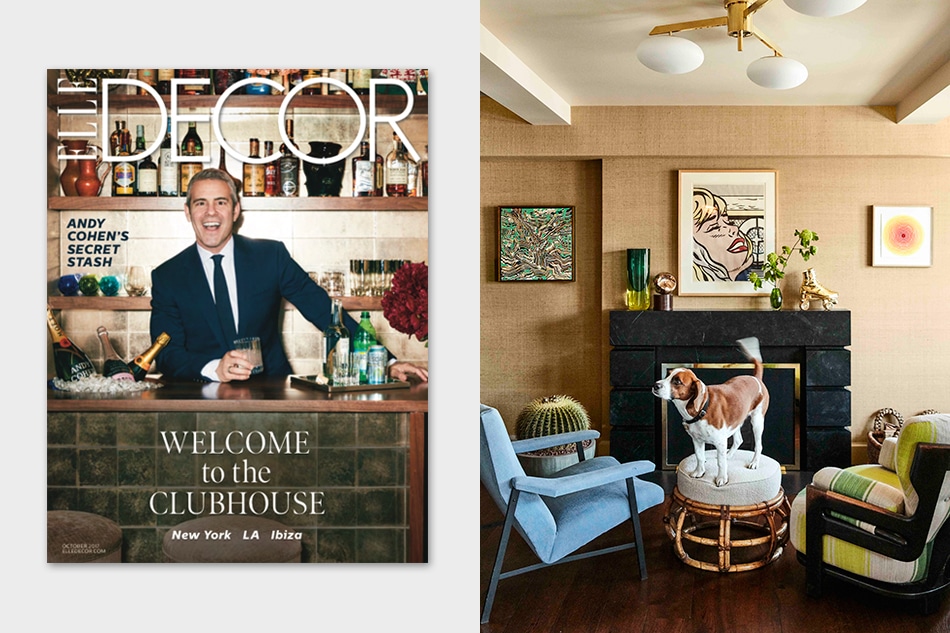 Left: The October 2017 cover of Elle Decor shows Andy Cohen at the bar in his Eric Hughes–designed apartment in New York’s Chelsea neighborhood. The 1960s bar stools are from High Style Deco. Right: Cohen’s dog, Wacha, stands on a vintage bamboo ottoman from Barbarella Home, which is flanked by a blue mid-century Italian armchair and a Guillerme et Chambron armchair from Hollywood at Home. A Roy Lichtenstein lithograph hangs above the fireplace. All photos in this slideshow by Douglas Friedman for ELLE DECOR 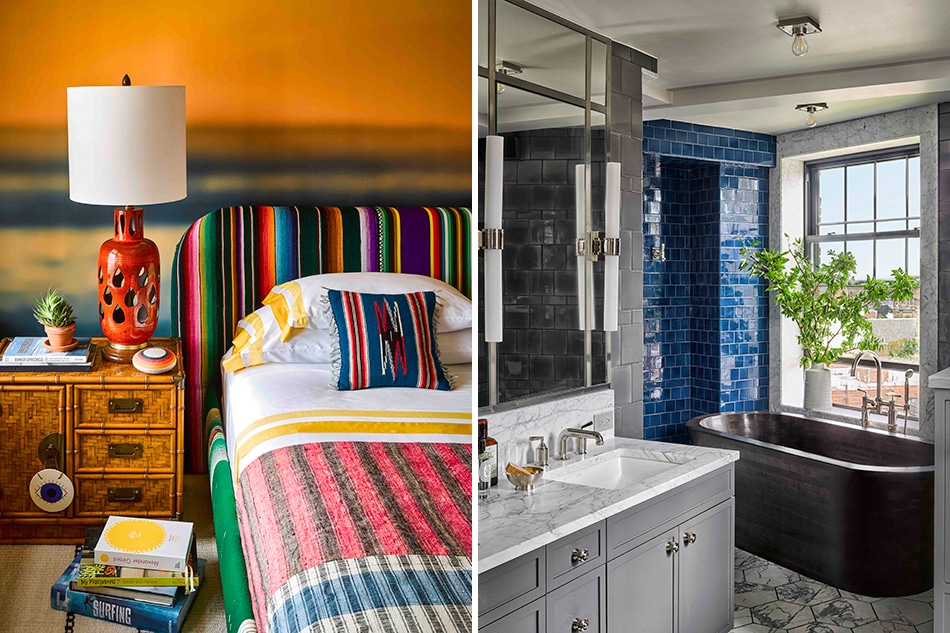 Left: In the guest room, a bed by Consort upholstered in vintage Mexican blankets sits next to a mid-century nightstand from Patrick Moultney Design Group. Right: The master bath features a wooden tub and a Statuary marble counter and window frame. 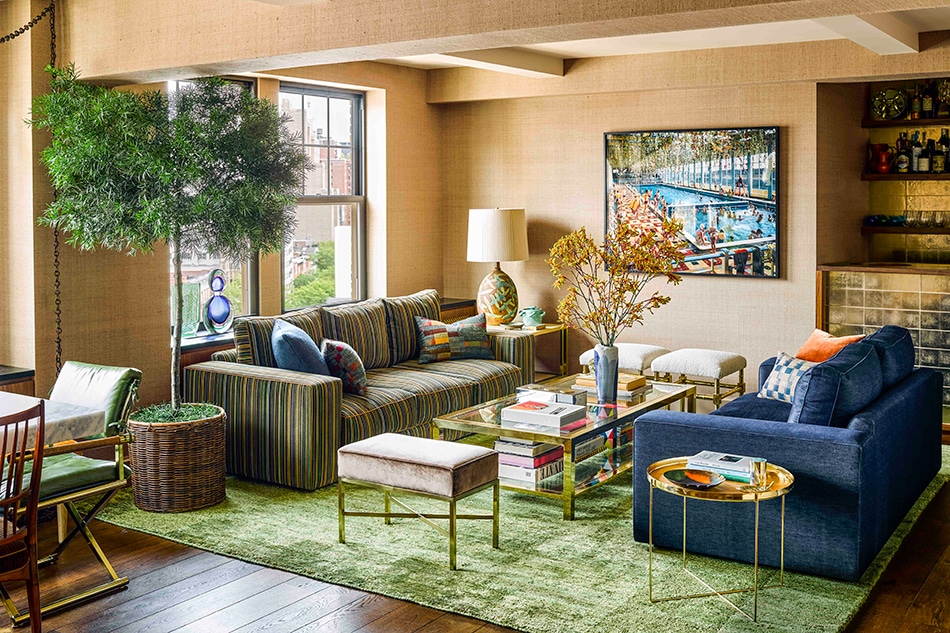 An Elmar Ludwig photo presides over the living room, which contains a sofa upholstered in a striped fabric by Paul Smith and a love seat covered in Ralph Lauren denim. The Willy Rizzo cocktail table and Italian bench are from John Salibello. Hughes sourced the pair of brass faux-bamboo stools and the mid-century Marcello Fantoni lamp from 1stdibs. 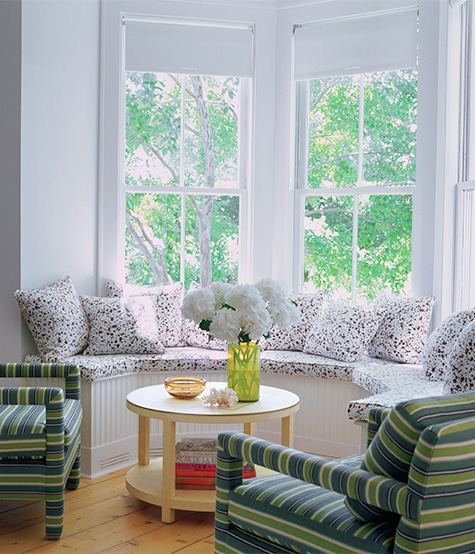 Still, Hughes’s transition was somewhat accidental. Growing up in Newport Beach, California, he was influenced by his mother’s and paternal grandmother’s “beautiful taste,” but he never planned to be a designer. Instead, he was expected to follow his father and maternal grandfather into medicine. But Hughes realized that was not to be and eventually found himself in the movie business. There, he became very friendly with Parker and often gave her advice on decorating decisions like paint colors and fabrics. “I’d always been the gay executive with the fancy office,” he quips.

Then, in 2002, Parker — who was both busy with work and pregnant with her first child — asked Hughes to decorate a house that she and Broderick had bought in Bridgehampton, on New York’s Long Island. Hughes had never decorated an entire house — at least not someone else’s — but his first effort was so successful that the couple became repeat clients. Now, Hughes is at work on their latest project, a double townhouse in Manhattan’s West Village.

After the Bridgehampton project, Hughes designed a glamorous New York apartment for the award-winning composers Marc Shaiman and Scott Wittman; a clean-lined weekend house for himself, in Wainscott, New York (which he has since sold); and Azaria’s loft, which is filled with contemporary art and prewar French and Scandinavian furniture. Although Hughes has no signature style — his approach is consistently client-driven — he calls himself “a modernist at heart.” He says he’d love “to live in one of Tadao Ando’s, John Pawson’s or Peter Zumthor’s buildings — they’re so pure and clean, and ‘things’ don’t really mean a lot to me.” But, he adds, “it’s a fantasy that will probably never come true, as my partner is just the opposite.”

“You envision the big picture, then the details, as does a producer. I’m just producing a different kind of picture.” 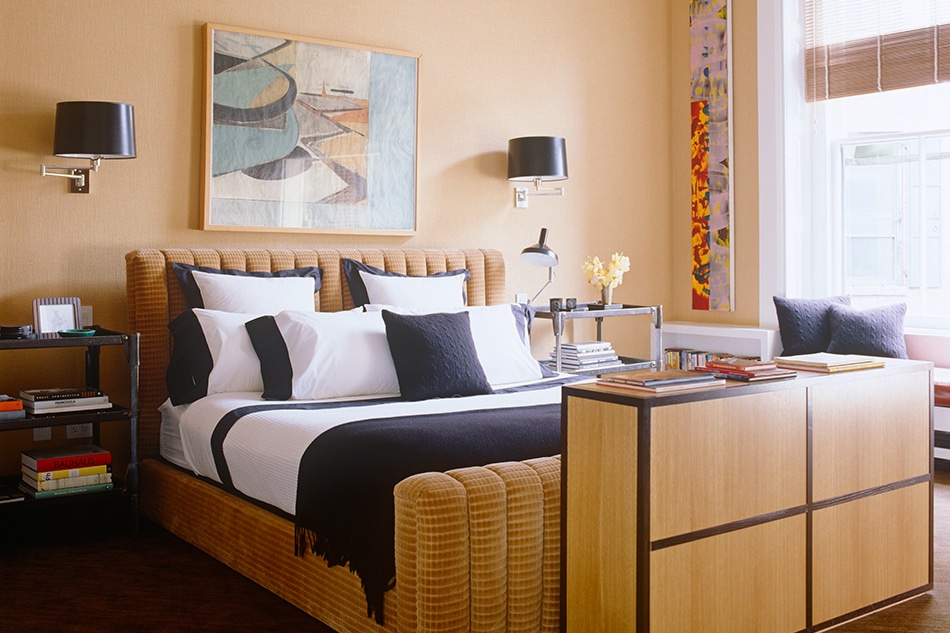 To offset the tall ceilings and the industrial pipes running through Hank Azaria’s master bedroom in Manhattan, Hughes softened the space by using burlap wallpaper. A work on paper by Neo Rauch hangs above the Ralph Lauren bed. Photo by William Waldron 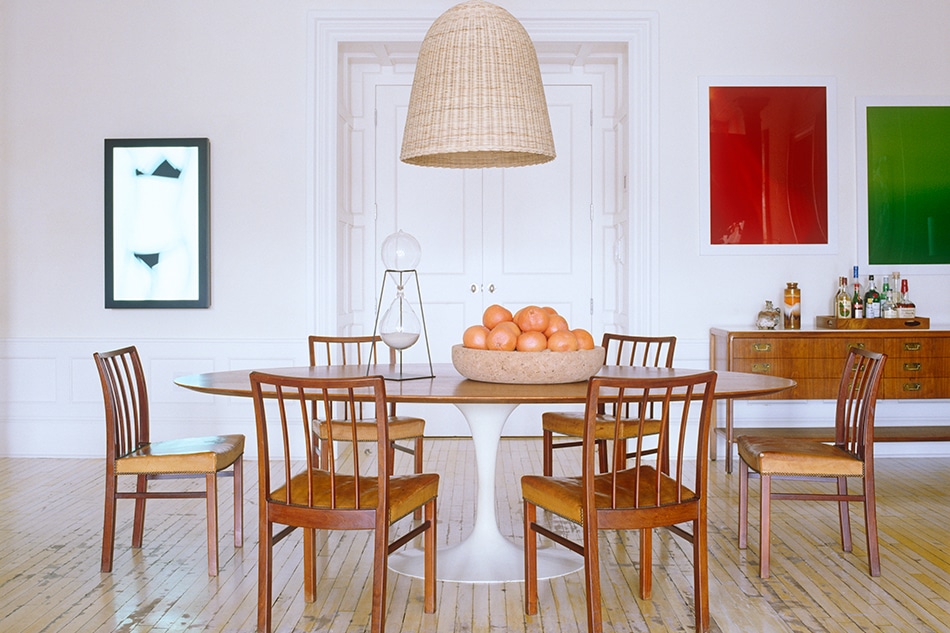 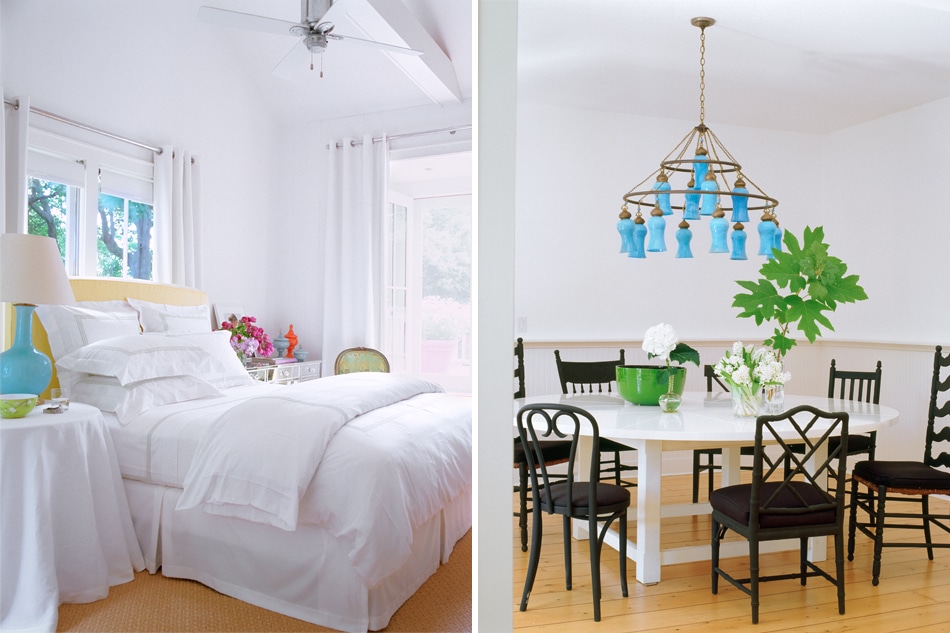 Left: The crisp Bridgehampton, New York, master bedroom of Sarah Jessica Parker and Matthew Broderick opens onto a large deck overlooking the garden. The blue porcelain lamp is by Christopher Spitzmiller. Right: The dining room, which was featured on the cover of Elle Décor, includes a custom table by Hughes surrounded by mismatched vintage dining chairs painted matte black. The blue Egyptian glass chandelier is by Liza Sherman. Photos by William Waldron 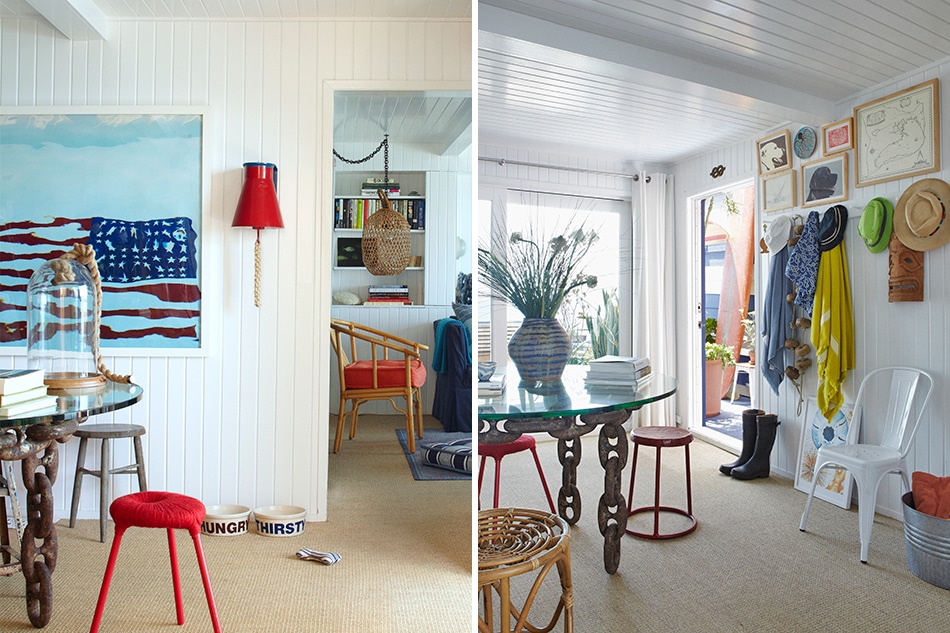 Left: In Hughes and Turner’s Malibu home, oversized marine metal links form the base of the custom dining table. A large photograph by Oberto Gili hangs next to a vintage ship’s bell. Right: Hermès beach towels and hats hang from the peg rack next to the door. Photos by William Abranowicz 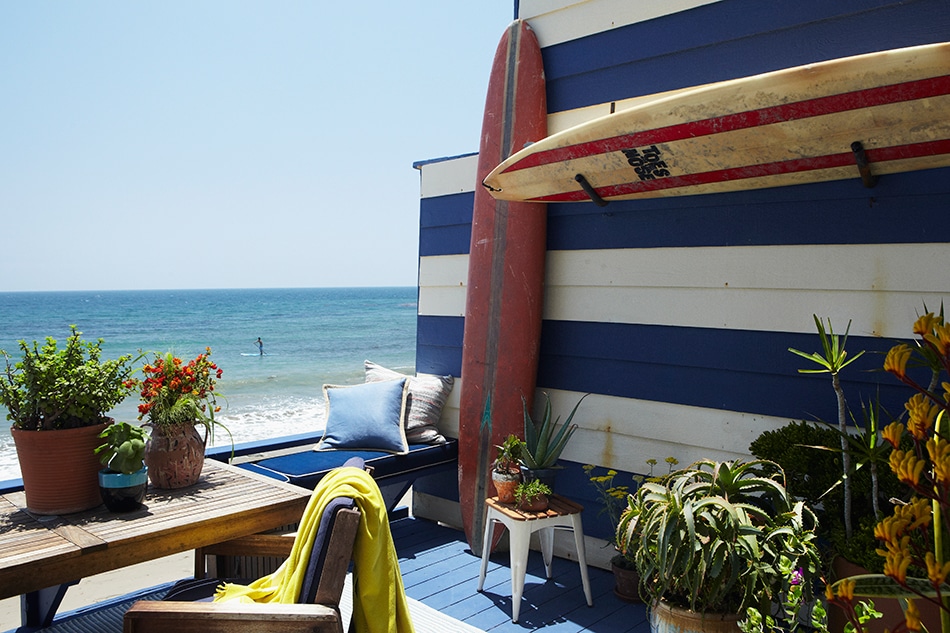 Hughes says the blue-painted deck, which contains surfboards and drought-resistant plants, is an ideal spot for entertaining friends or curling up with a good book. Photo by William Abranowicz 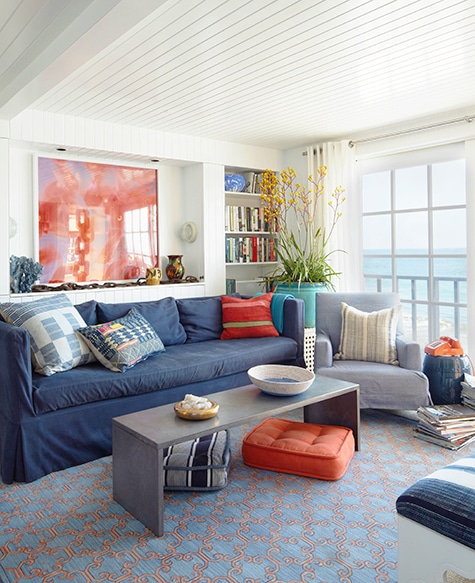 The Malibu home of Hughes and his partner, Nathan Turner, features a blue-canvas-slipcovered sofa by Turner and an armchair in a Ralph Lauren fabric. Goldfish by Oberto Gili hangs above the sofa. Photo by William Abranowicz

Hughes’s and Turner’s opinions may differ on “layering,” but they harmonize nicely in the designers’ Malibu retreat — a sunny, casual place with a nautical blue-and-white color scheme. Like Hughes, Turner is a California native (from the Bay Area), and both men agreed that a surf-shack vibe was the way to go. Beach towels and bathing suits hang from pegs on a wall next to the front door near a round table with a base made of old anchor chains that was designed by Hughes. The denim-slipcovered sofa and vintage pieces found by Turner add to the air of funky chic. As with his former Wainscott house, Hughes painted this one in Benjamin Moore’s Super White. “I love the way it picks up the light,” he says.

Hughes is currently at work on a Martha’s Vineyard getaway for Stacey Snider, the CEO and chairman of Fox, and her husband, music producer Gary Jones. His other projects include an apartment in New York for actress Lauren Graham and residences on the West Coast. In addition, he and Turner have bought a three-bedroom cottage in Ojai, California, that they plan to expand. Hughes would love to design a hotel, which he sees as a natural next step. “So much of what we do is about making people feel comfortable,” he explains. But whatever the future brings is fine. “The thing about my career is that it’s been such a surprise,” he says. “There’s no agenda. I let it happen organically, and it’s brought me a lot of joy. You just have to trust your instincts.” 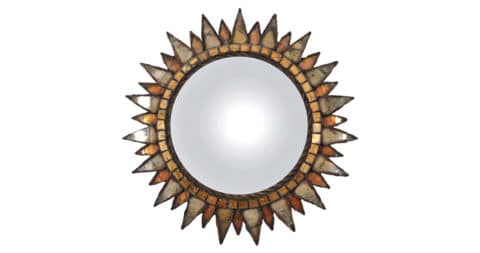 “I love Line Vautrin’s pieces. They speak to my love of the handmade, but they’re the most elegant version of craft possible, where it’s elevated to art. And the colors are next-level chic! So French — so perfect!” 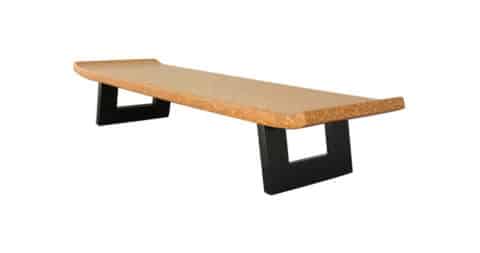 “I’m obsessed with cork — I appreciate its earthy refinement. I used a Frankl bench/coffee table like this one in Hank Azaria’s apartment. Frankl’s simplicity of line inspires me, and the raised ends give it a bit of Asian flair. To me, this piece borders on sculpture.” 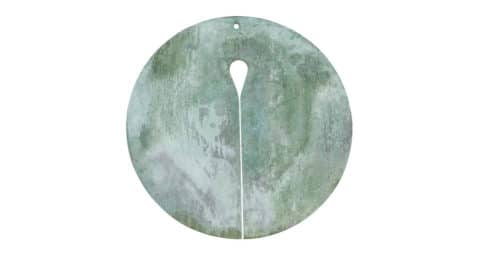 “I love the tension between soft and hard in Bertoia’s sculptures, and adding one like this to an interior can focus things a bit. I particularly like his gongs. The patina on this one is gorgeous. The shape, almost like a tribal mask, is slightly scary, but the sound is magic!” 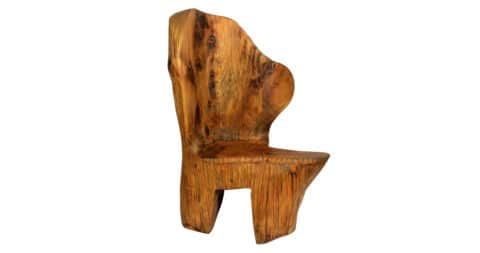 “Blunk’s free-form wood pieces speak to the California boy in me. I love their natural elegance. You really see the beauty of nature in his work. Again, it’s that tension between a hard material and a soft line that I respond to here.” 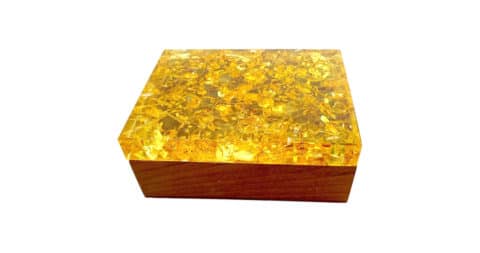 “I love using slightly unconventional materials in a room, and these resin pieces speak to this desire. The fractured texture of the resin is lovely to look at, but it also plays with light so beautifully.” 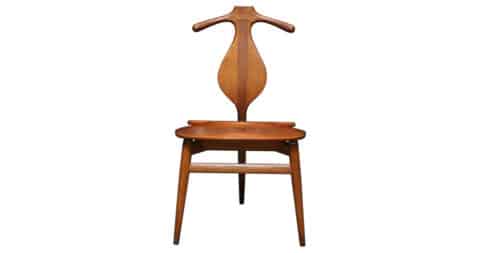 “Hans Wegner’s Valet chair is the perfect blend of form and function — and what beautiful form! This is the perfect addition to any bedroom, bathroom or dressing room.” 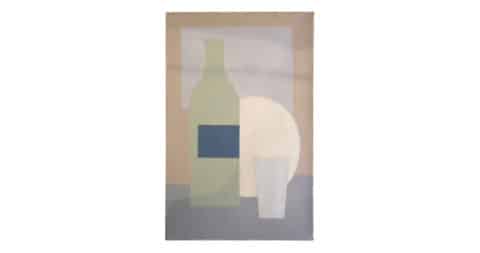 “I love this painting — the one-dimensional quality, the colors, the shapes, the sparseness. It reminds me of one of my favorite artists, Giorgio Morandi.” 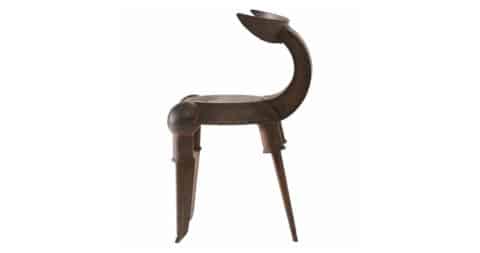 “There’s something about a statement chair — in a living room, as a punctuation mark next to a bed, with books stacked on it or in a bathroom with a stack of towels. I love this Tom Dixon chair because it’s slightly tough looking. I think it’s important to balance the masculine and feminine in design.”