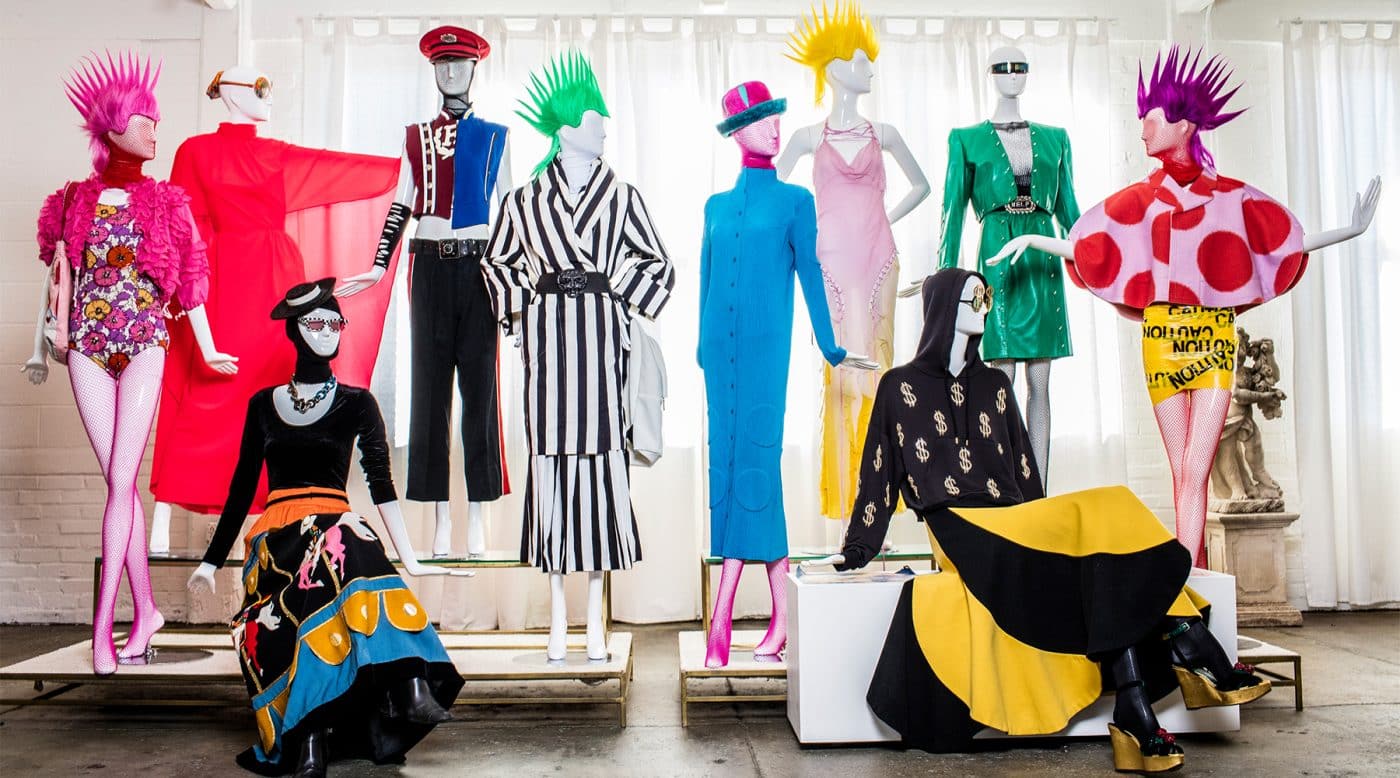 From his home base in Cincinnati, owner Tony Tiemeyer shares his penchant for clothes that are inventive, eye-catching and, most of all, fun.

June 27, 2021By his own admission, Tony Tiemeyer, proprietor of vintage clothing treasure trove Evolution, is an unconventional follower of fashion. “I have sixty acres of land here in Cincinnati, so I’m usually on a tractor or planting peonies,” he says. “I’m like a farmer! But I love good food, well-made clothes, beautiful flowers and great interiors . . . . The homes of Hubert de Givenchy, do you know them? They were incredible. Just incredible!”

Tiemeyer enjoys veering off topic. He’s an aesthete with seemingly a thousand hobbies, and he prefers not to be pigeonholed. “I don’t like to say I ‘deal’ in fashion. I’m interested in the backstory, the quality and the intellectual side of clothes,” he says, adding with a laugh, “Plus, I don’t care for labels.” He has an eye for the avant-garde and the unique — from flamboyant accessories, like crystal-embellished Adolfo berets and Prada Mohawk pumps, to baroque runway pieces by Dolce & Gabbana, Moschino and Gareth Pugh.

As colorful as the garments that surround him, Tiemeyer has been a creative influencer since his late teens. In 1985, fresh out of high school, he opened the first incarnation of Evolution in his native Cincinnati, attracting a loyal following of arty students. “The University of Cincinnati runs a great fashion and design program, so I would hang out with all those kids,” he explains. “We’d go clubbing together — we’d have a blast!” When his friends were offered co-ops (student employment positions) in New York, he tagged along for a visit, keen to immerse himself in the counterculture.

“People were so experimental in the eighties,” he remembers. “I wore lots of rhinestone pins. I’d throw on a vest with a skirt and some Converse gym shoes.”

In the early 2000s, he opened a boutique in Cincinnati’s Hyde Park neighborhood, specializing in designer ready-to-wear. He was supported by his friend Zac Posen, who had just burst onto the scene with his signature fairy-tale gowns. Posen agreed to have Tiemeyer stock his creations, which opened a gateway to other luxury brands.

Tiemeyer invested in both classic and dramatic pieces by Oscar de la Renta, Alexander McQueen and Riccardo Tisci, who was then at Givenchy. “The ladies of Cincinnati, Kentucky and Indiana are quite conservative and elegant. But wow, did some of those McQueen pieces look great in the window! I knew I’d never sell a whole bunch of them, but that wasn’t the point. It got them in.” Tiemeyer wisely held on to these attention-grabbing props, gradually assembling an archive of couture gems.

In 2005, he accepted a managerial job at Saks Fifth Avenue Cincinnati, agreeing to head up the store’s exclusive personal-shopping division. Initially, he enjoyed building a network of prestige clients, but he soon felt that his wings had been clipped. “I didn’t like the corporate world — I’m too much of a free spirit,” he explains.

He returned to his first love and relaunched Evolution, which he operates exclusively on 1stDibs, armed with rare vintage finds, including an extravagant collection of footwear. “Those classic designer handbags bore me to death, but I’ve always had a thing for wild shoes,” says the entrepreneur, whose pieces have been snapped up by New York’s Metropolitan Museum of Art and such exuberant trendsetters as Lizzo and Lil Buck.

Tiemeyer may not like labels, but his take on personal style is simple and to the point: “Like Karl Lagerfeld once said, fashion is an applied art. Just make sure you dress for yourself and have fun!”

Here, Tiemeyer talks with Introspective about his favorite pieces and explains why openness to new ideas is the key to finding your best looks.

Would you say you naturally gravitate more toward a maximalist style?

I’ve always been drawn to graphic, standout things because I like the way they pop. It must be the club kid in me! But fashion is about having fun, and that means not having a narrow view.

I have clients who are very chic, who prefer the Jackie O minimal look, which I also love. Then there are the Japanese designers — Issey Miyake, Rei Kawakubo and Yohji Yamamoto — who are brilliant. Their collections are always so modern and experimental without trying too hard. The quality is amazing. Lately, we’ve sold a lot of Undercover by Jun Takahashi. I am a huge fan of his. Bianca Jebbia [wife of James Jebbia, who created Supreme] just bought a couple of pieces, including his Miles Davis–print skirt suit.

Do you have to be an extrovert to enjoy avant-garde fashion?

People thought I was crazy when I started selling Alexander McQueen in Cincinnati, Ohio! Fashion here tends to be more quiet, in [a palette of] navy, black, camel and cream. But it’s all about having an open mind.

McQueen’s tailoring was so amazing, it just made you look good. It actually became our number-one-selling line. It’s important to play with different styles. Some things are, of course, less wearable, more like pieces of art, like a Jean-Charles de Castelbajac double poncho we had, a really rare piece from the 1970s.

Where do you find all these amazing things?

I grew up thrifting, so I have an instinct for these things. I’ve always known where to look. I have been in the business so long that I’ve already been through all the attics of Cincinnati. Now, I often buy from collectors, but back then, I used to say to all the [local] ladies, “If you hate all that ugly eighties wear, I’ll take it — I love it!” I definitely drained all their closets.

What excites you most about your work?

I get such a thrill when we sell to museums. To me, it’s even more interesting than knowing a celebrity has worn an Evolution piece. The Metropolitan Museum of Art has two Moschino handbags from us: the Moschino milk carton, circa 1990, and the Moschino iron handbag, circa 1995. The iron handbag was exhibited in the museum’s 2019 “Camp” exhibition, which was super-exciting.

Another example is our Prada runway dress from Fall 2011, acquired by the National Gallery of Victoria. The piece [an orange and burgundy paillette-covered dress] was worn on the cover of Vogue magazine by Emma Watson in July 2011 and exhibited in the Met’s Spring 2012 Costume Institute exhibition, “Schiaparelli and Prada: Impossible Conversations.”

Which designer or label do you think will be highly collectible in the future?

Pieter Mulier for Azzedine Alaïa. He worked behind the scenes with Raf Simons for years as his right-hand man at Jil Sander, Dior and Calvin Klein. He’s really talented, and he has lots to do. In fact, he once bought a pair of really cool Ferragamo shoes from me at a vintage fair in New York.

The Midwest has produced some iconic designers. Do you have any favorites?

Gosh, all of them! Halston, Bill Blass and Stephen Sprouse. They are so fun. All corn-fed boys who became fashion icons! 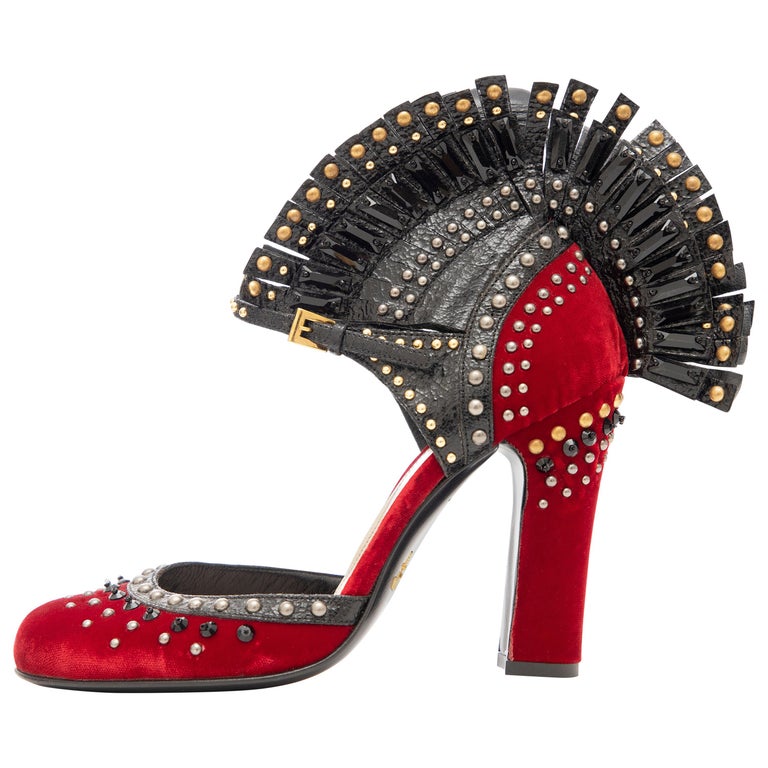 “I love the punk edge of these shoes. They are just so unique and fun. I see them more like pieces of sculpture than footwear, although that’s not to say they shouldn’t be flaunted. They were made to party, preferably with a miniskirt and plenty of attitude.” 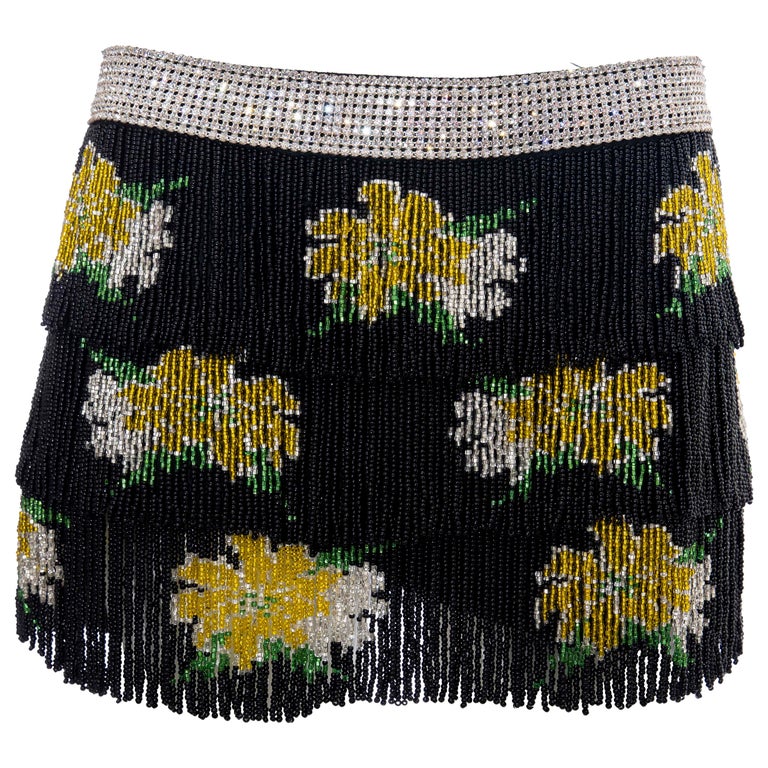 “This fringed skirt is more micro than mini. It takes me straight back to the nineties, even though it’s a millennial look. When Dolce & Gabbana featured it on their Spring 2000 runway, they paired it with sheer leopard-print stockings — totally decadent!” 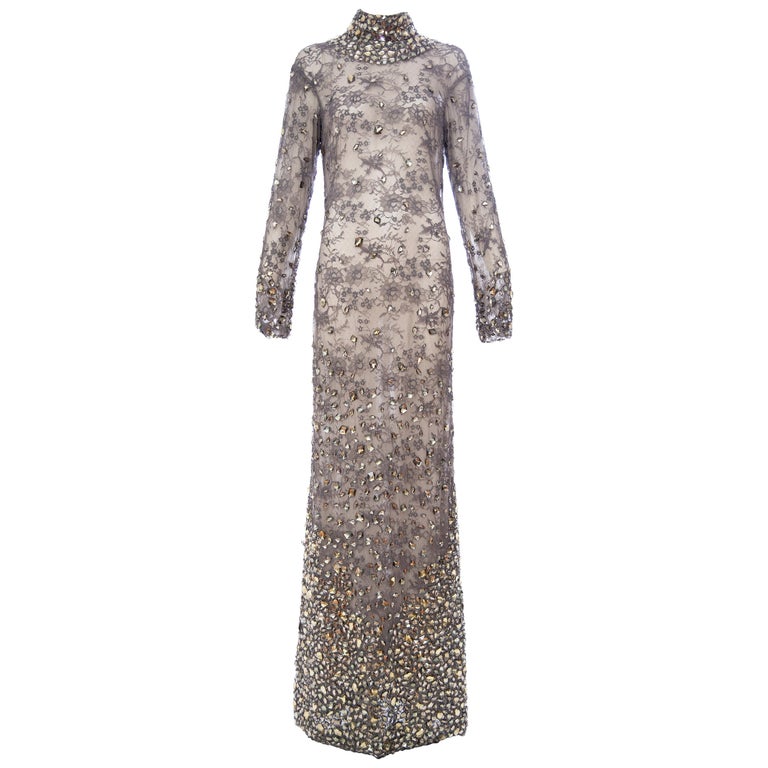 “Anne Hathaway wore this beaded gown to the Oscars when she hosted the ceremony in 2011. Elle Macpherson and Eva Green were also photographed wearing the dress on the red carpet that year, and it was featured in the 2013 documentary Scatter My Ashes at Bergdorf’s. So let’s just say it’s had a starry past. The dress is exquisitely made by hand, crafted from smoky-gray lace and embellished with topaz-colored crystals. Dramatic and spectacularly sexy.” 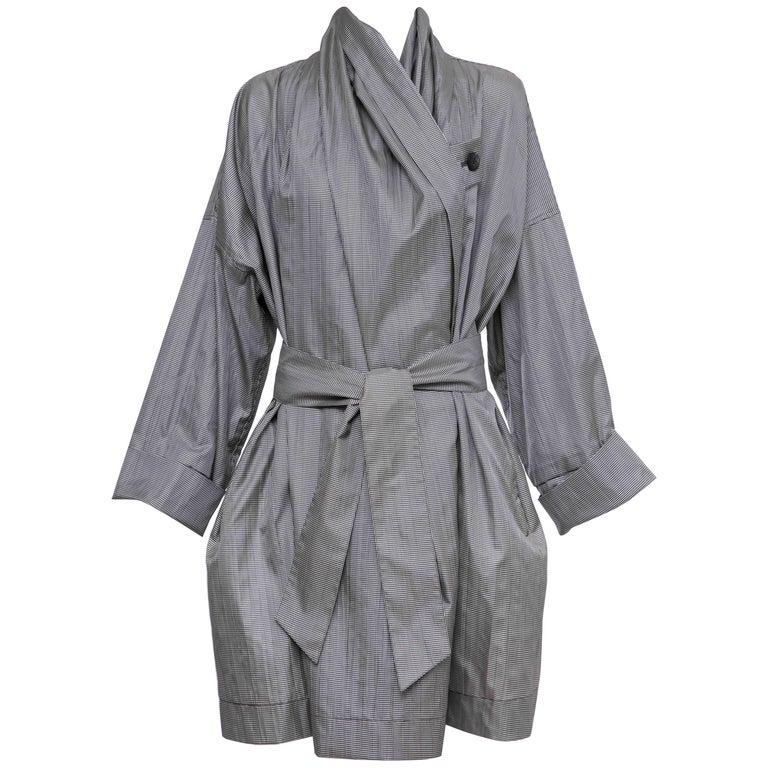 “It’s hard to believe this trench is from the mid-eighties. It’s so modern and chic, designed to elevate the simplest outfit, anytime, anywhere. What I love most about the Japanese designers who emerged during this period is how timeless their cuts and silhouettes are to this day. Designs like these are forever pieces. You can see the craftsmanship in every seam.” 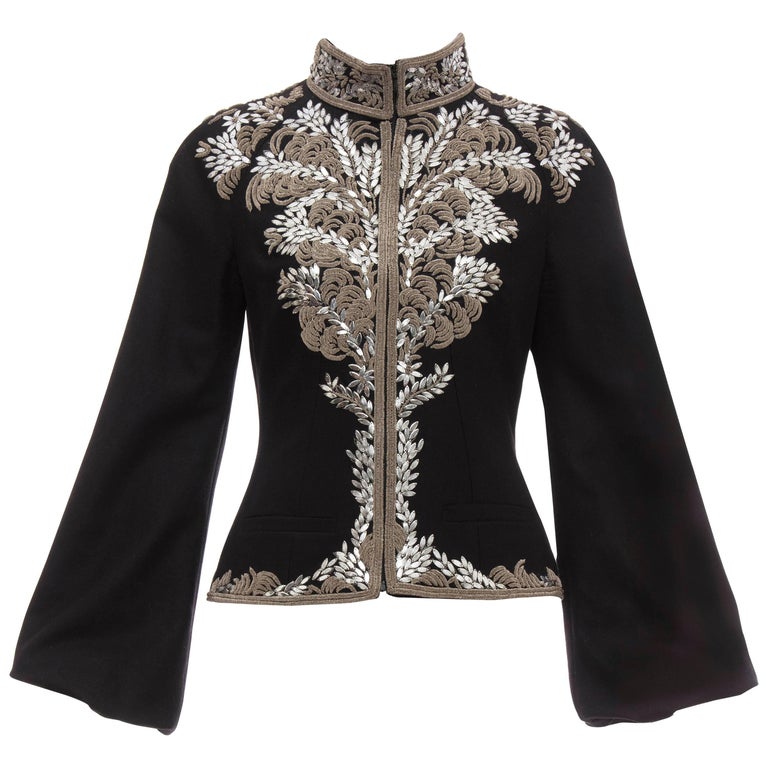 “This gorgeous jacket is unmistakably McQueen. You simply can’t beat his tailoring, which he executed with such flair and confidence. I’m a sucker for embroidery, and this is the apex of the art form, achieved by hand stitching silver purl wire and paillettes. Look how it tucks in at the waist and how the sleeves gently flare. The way it sits on the body is perfection.” 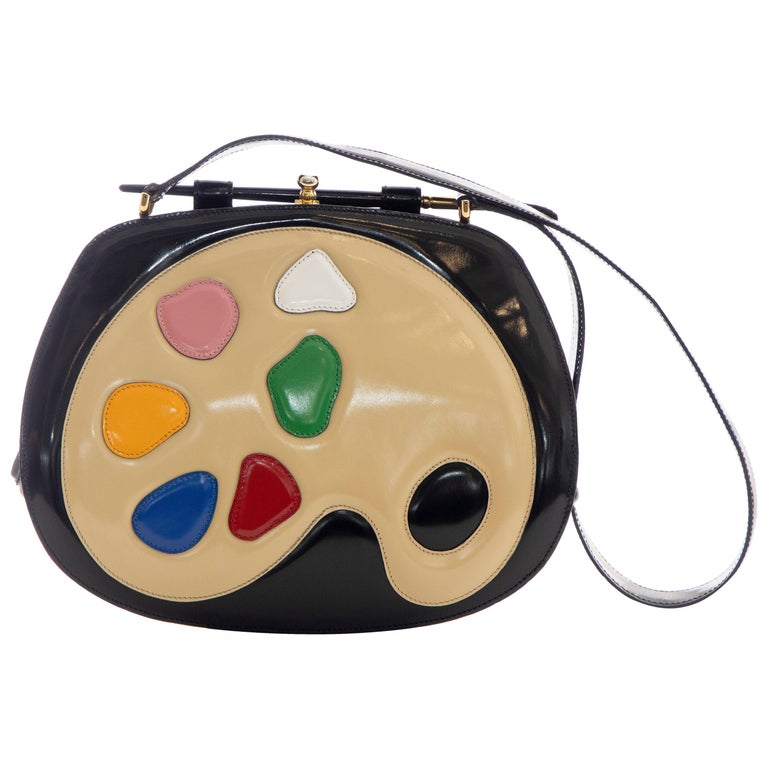 “I’m not a handbag person, but I love this design. Most of the Moschino bags that we have sourced have ended up in museums, which goes to show how collectible this label’s adventurous designs have become. This one actually comes with a real paintbrush, complete with bristles. It’s just pure fun!” 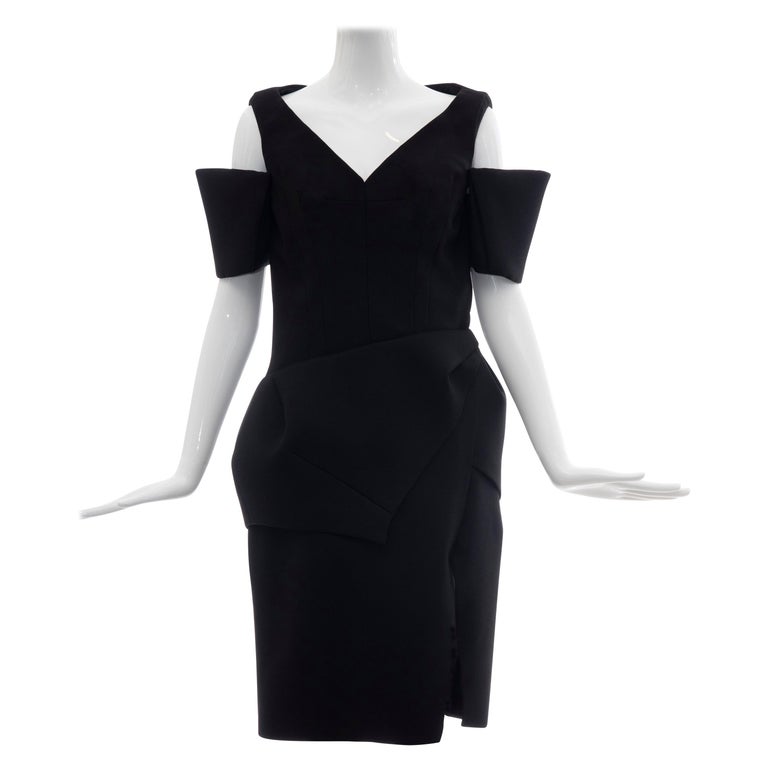 “Powerful and structured, Nicolas Ghesquière’s spin on the little black dress takes this classic look to new heights. I’m a huge fan of the designer and especially his work at Balenciaga, which is simple and classic yet powerfully sexy. The dress is beautifully made, with a built-in brassiere, so it’s much more complicated than it appears, and that’s all part of the magic.” 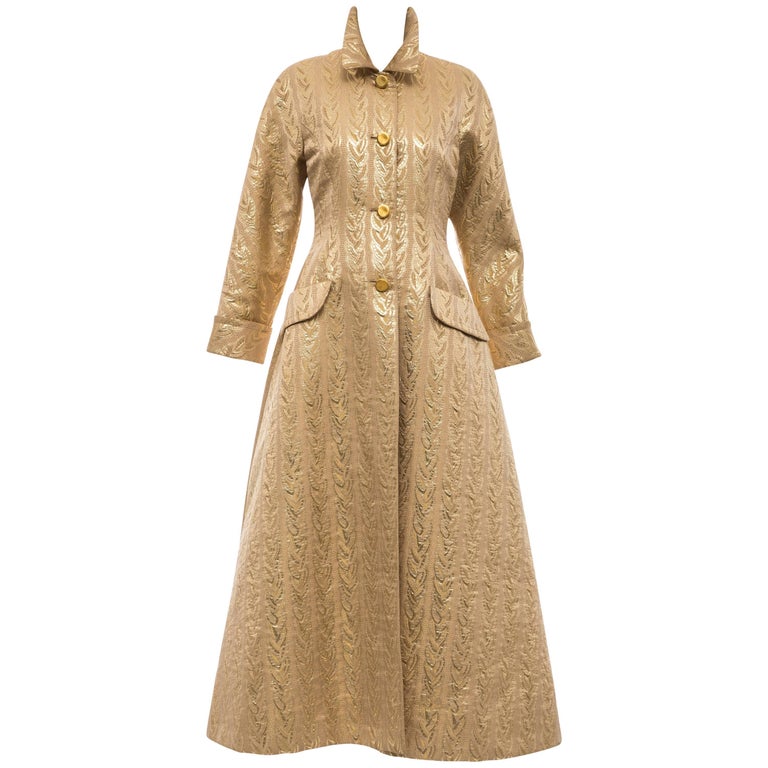 “This stunning coat is a whole thirty years old but it could have just come off the runway. It is forever modern and exquisitely made, crafted from the most luxurious brocade fabric. It’s cast in that beautiful warm gold color that goes with everything. In fact, it was shown on Prada’s Fall 1992 catwalk with a simple pair of ankle-grazing camel-colored pants.”