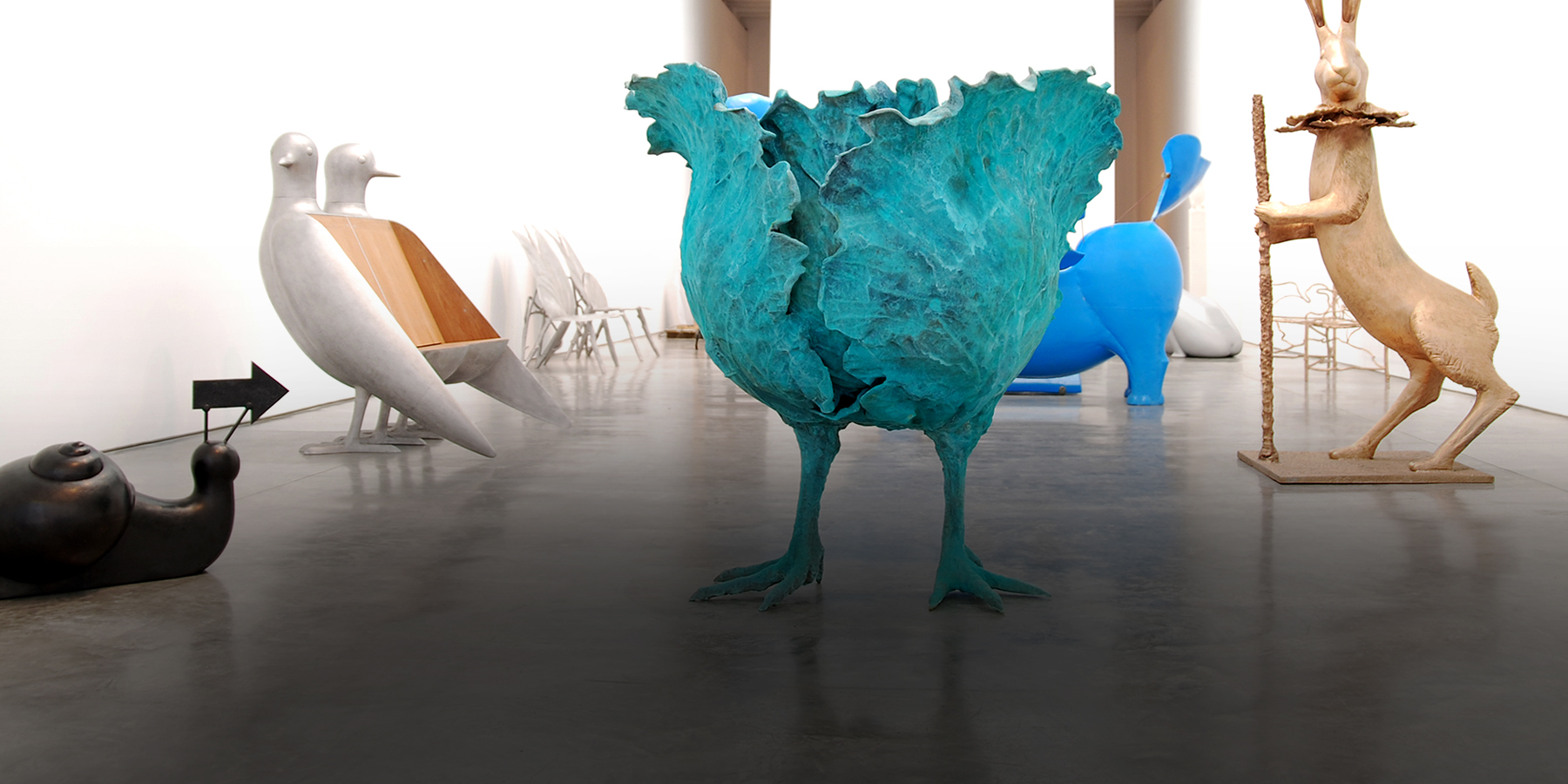 A dual exhibition at Paul Kasmin Gallery's two Chelsea spaces brings to life the whimsical oeuvre of cult-favorite husband-and-wife French artists François-Xavier and Claude Lalanne, presenting a veritable safari of their whimsical, animal- and plant-inspired sculptures that double as stools, chairs and even bathtubs. 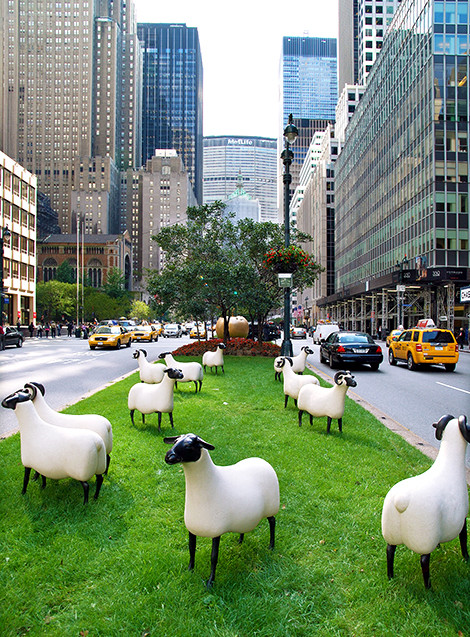 May 30, 2012French sculptors Claude and François-Xavier Lalannes’s iconic flocks of sheep and rams grazed along Park Avenue in 2009; François-Xavier created his initial woolly herd in Paris in 1966, and Yves Saint Laurent was one of the first to collect them. Photo by Mark Markin

On a recent spring evening in New York, at Paul Kasmin‘s two Chelsea galleries, Claude Lalanne was New York’s number one “It” girl. The artist’s admirers spilled out of the Kasmin spaces, where an exhibition of her work and that of her late husband, François-Xavier, had just opened. She had double kisses for everyone: Bette Midler to the right, Peter Marino to the left; Kenneth Jay Lane and Jean-Gabriel Mitterrand standing by to say hello. They warmly grasped the petite Lalanne, still lively at 88, who with François-Xavier created a whole new breed of sculpture — bronze, steel, stone and copper animals and plants that cheekily function as stools, furnaces, chairs, bars and even bathtubs.

Lauded when they first burst on the scene 60 years ago and in the decades since — their work was exhibited at the Art Institute of Chicago in 1967 and featured in Life in the 1970s — the Lalannes found themselves a bit out of style in the ’80s and ’90s. Galleries never stopped showing their work, however, and the couple enjoyed a renewed public embrace in the last few years, especially after 2009, when a lifelike herd of their epoxy-stone-and-bronze sheep grazed along Park Avenue, joined by one of François-Xavier’s massive bronze monkeys and one of Claude’s signature Choupattes — a copper-and-bronze cabbage, with chicken feet. A retrospective in Paris at the Musée des Arts Décoratifs followed in 2010.

The Lalannes have long been darlings of art, fashion and social types, from Tom Ford to Valentino, Jane Holzer to Beth Rudin DeWoody, Coco Chanel to Yves Saint Laurent. YSL first met them in the mid-1950s, when they were working on window dressings for Dior and he was a designer there, and he came to see the couple’s first joint gallery show, “Zoophites.” 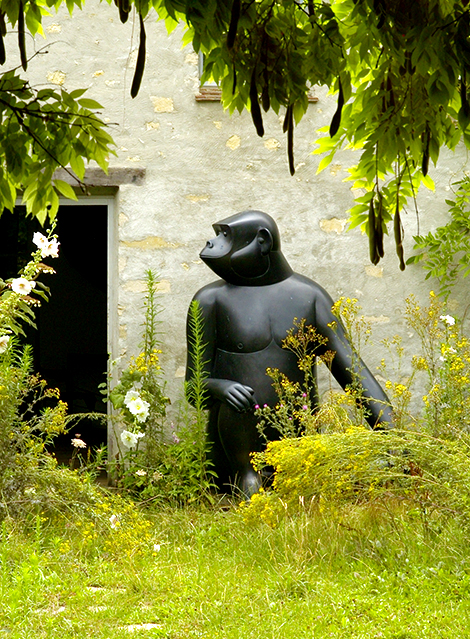 Since 1967, the Lalannes have made their home and studio on a farm outside Paris where such works as François-Xavier’s bronze Singe Avise (Trés Grand), 2008, live happily.

Including a veritable menagerie of whimsical creatures both real and chimerical, the couple’s art is never seriously self-important, but the Lalannes are serious artists nonetheless. They were both classically trained in Paris, he at the Académie Julian, she at the École Nationale Supérieure des Arts Décoratifs and the École des Beaux-Arts. When they met at François-Xavier’s first gallery show in 1953, he was pursuing drafting and painting while she had a passion for metalwork and architecture. They began collaborating in 1956, mostly on decorative projects — like those Dior window displays.

Saint Laurent would eventually go on to snap up entire flocks of the Lalannes’ now-famous woolly sheep, but the designer’s first commission was a sculptural bar for the Paris apartment he shared with Pierre Bergé. Delivered by François-Xavier in 1965, Bar YSL, as it came to be known, was a two-tiered, Space Age–style tour-de-force, comprising an ovoid bottle rack, a drink shaker in the shape of a rhino horn, a spherical ice bucket and a crystal vase. (Leave it to a Frenchman to foresee a need for flowers gracing the bar.) The one-of-a-kind piece became the first of many Lalanne works Saint Laurent commissioned for his home, several of which made history half a century later when they sold at the 2009 Christie’s sale of his treasures. Bar YSL alone went for $3.5 million. (Another YSL commission, an installation of 15 mirrors set in frames of entwined bronze-and-copper hostas, took Claude 10 years to complete. Christie’s sold it for $2.39 million.)

As young artists, Claude and François-Xavier worked in a noted artists’ colony in Montparnasse. According to Paul Kasmin, William Copley, the American painter and collector who had a studio there, “was very fond of François-Xavier. He was moving back to America and said, ‘You should take my studio.’” The Lalannes moved in amidst the best of neighbors, many of whom were also friends — Constantin Brancusi, Max Ernst, Larry Rivers, Jean Tinguely, James Metcalf, Niki de Saint Phalle.

“THE WORK WAS SURREAL, EDGY, BEAUTIFUL IN A PERSONAL WAY.”
– Peter Marino 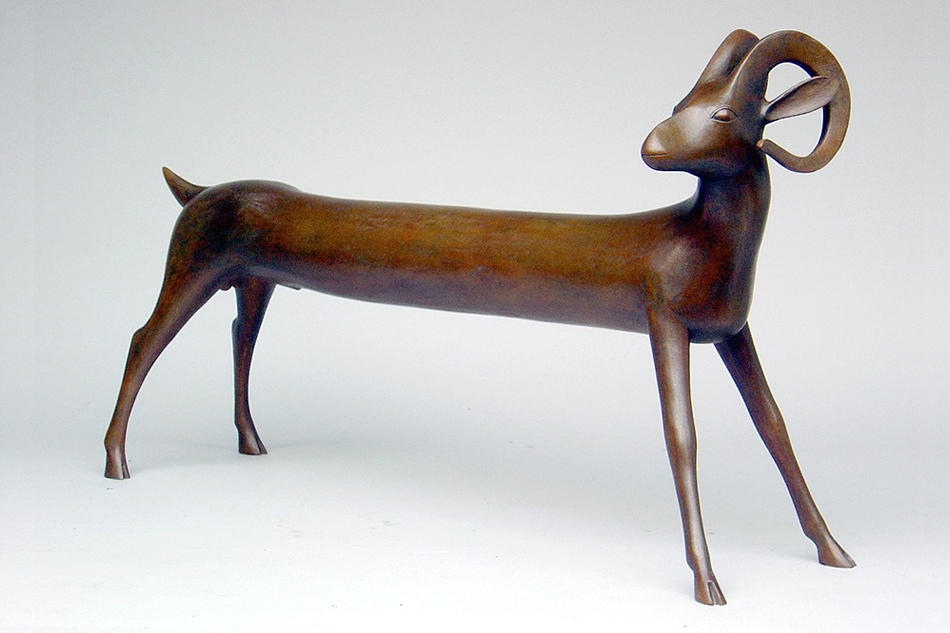 The haughty bronze Caprin, 2011, in an edition of eight, is attributed to both artists, is on view at Paul Kasmin. 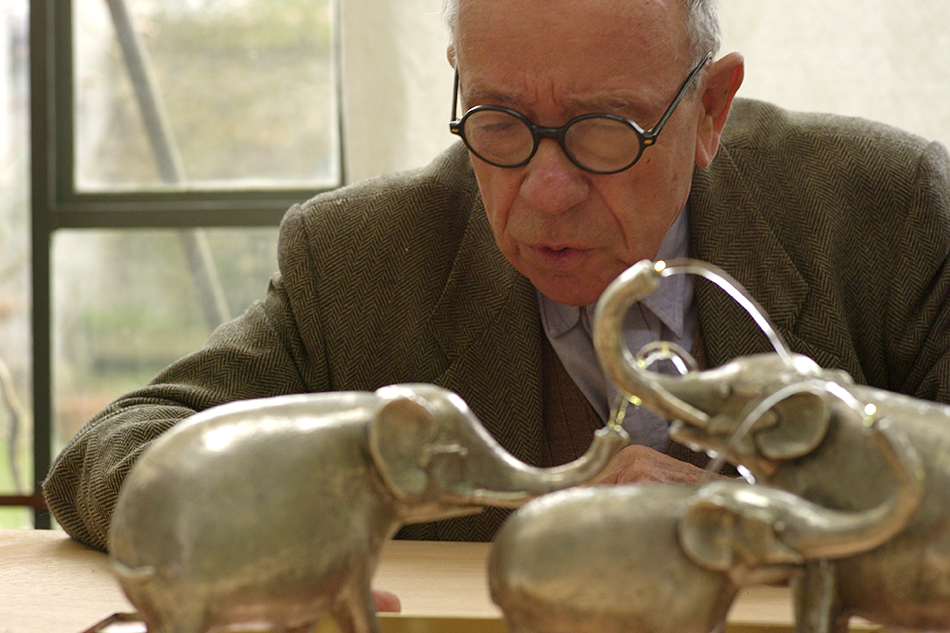 The late François-Xavier trained as a painter and a draftsman. 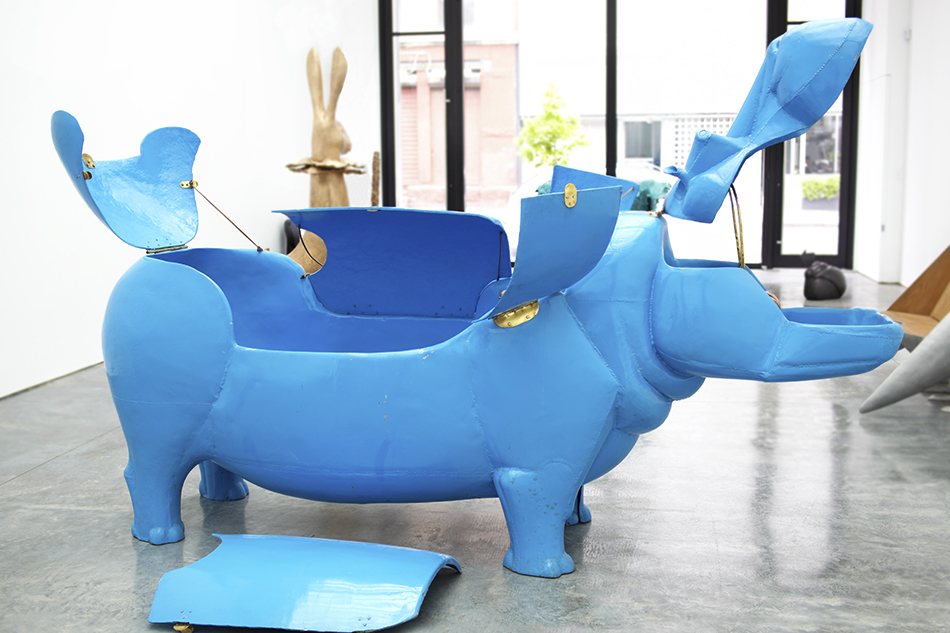 On display at Paul Kasmin, François-Xavier’s Hippopotame, a blue resin sculpture containing a working sink and bathtub, was finished in 1969 for Teeny and Marcel Duchamp. 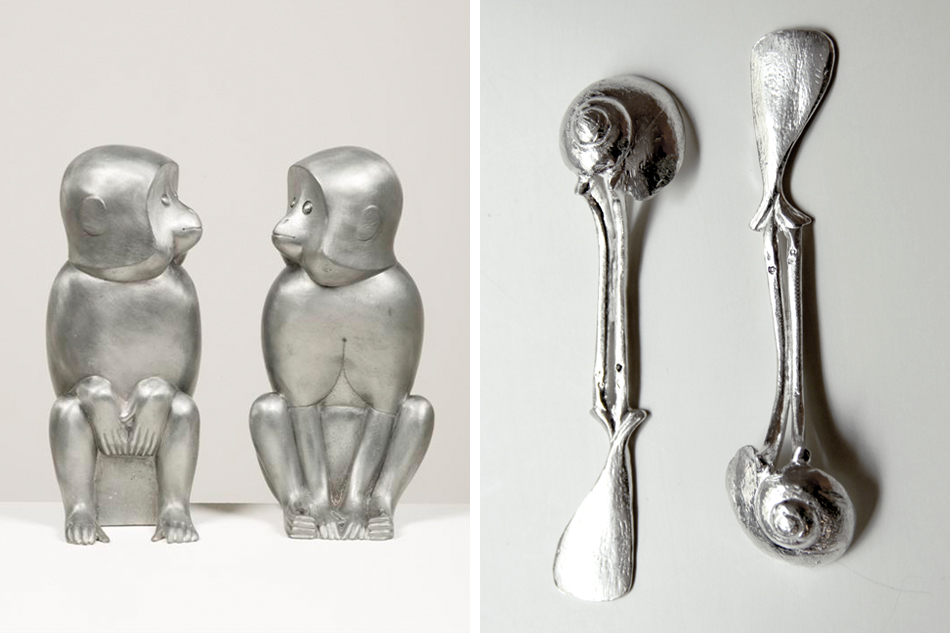 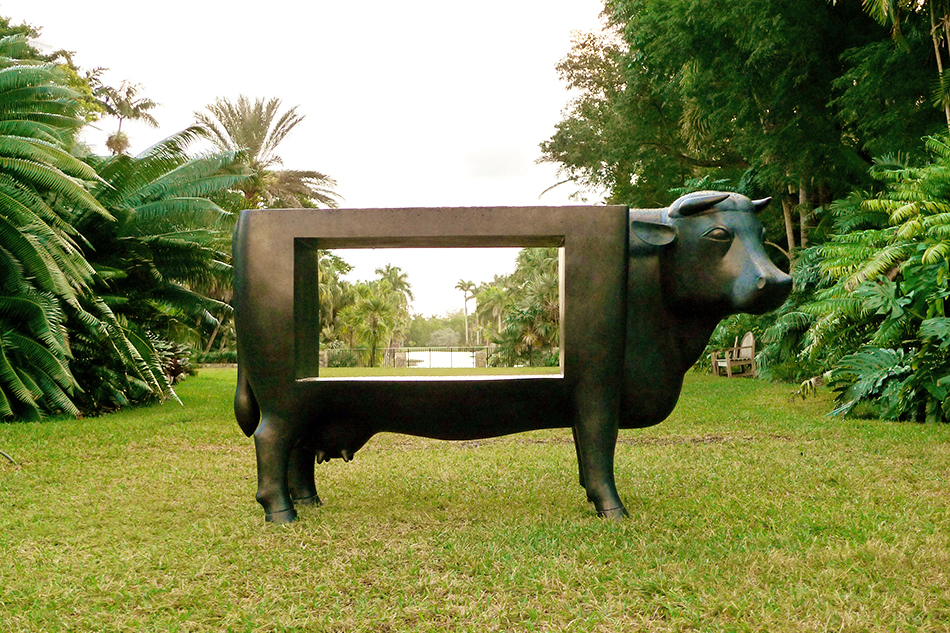 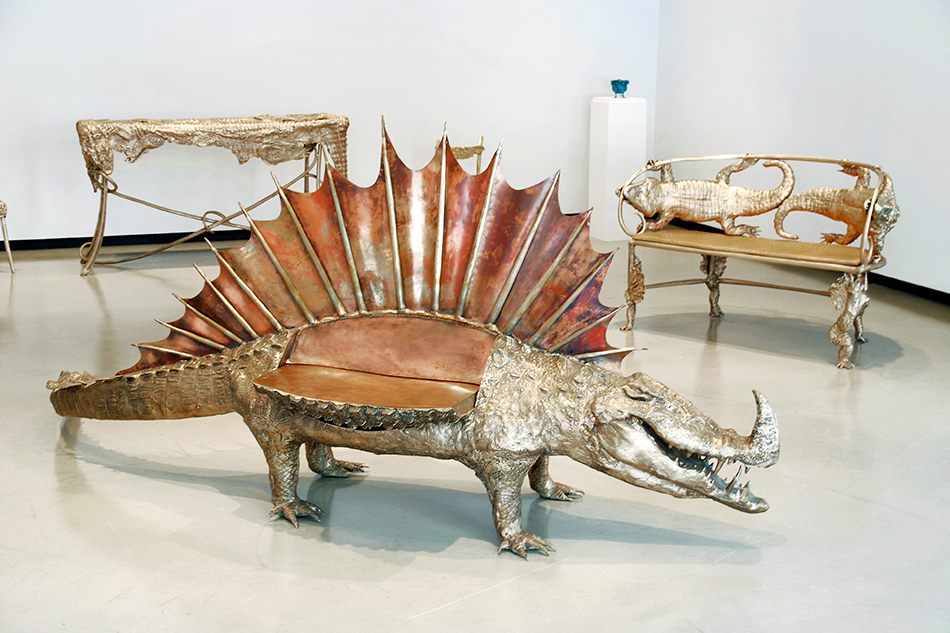 On display at Paul Kasmin: Claude’s La Femme du Crocodile, 2012, in the foreground, was modeled after a drawing done by her late husband. 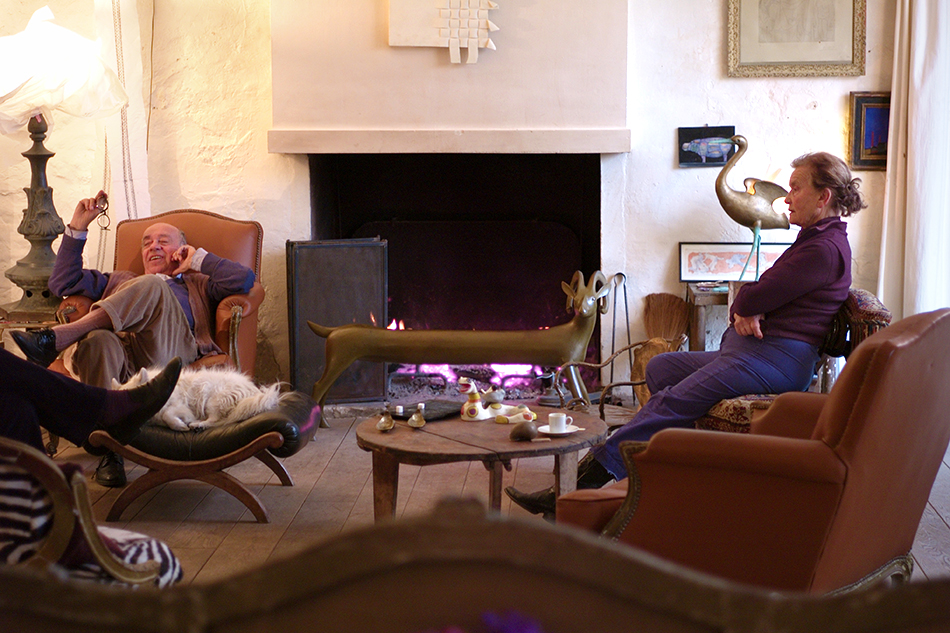 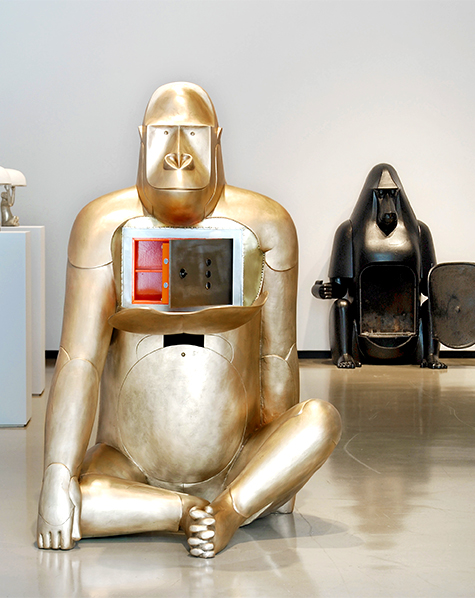 Only François-Xavier could imagine a bronze gorilla as a safe, and his baboon cousin as a cast-iron fireplace, both part of an edition of eight at Paul Kasmin.

While the couple worked together constantly over the years and, indeed, signed many of their joint works simply “Les Lalannes,” they also each developed their own individual styles: François-Xavier worked with grand, simple forms, inspired, art critics say, by a postwar job as a security guard in the Egyptian room at the Louvre; Claude found her muse in the leaves and flowers from her garden, developing organic shapes that she cast in galvanized metals. “My whole life I was inspired by nothing but nature,” she says.

As seen in the current Kasmin show, François-Xavier tended to work large, with a pet passion for monkeys and baboons — though Claude says she prefers his ostriches. Claude can go big or small, favoring crocodiles that, at Kasmin, make their way into leather-seated banquettes and consoles (so-called “Crococonsoles”). The most touching object on display, though, is a tiny childlike drawing that François-Xavier did of his wife sitting on a crocodile. At Kasmin, the drawing hangs on a wall opposite the life-size piece that it inspired. “Crocodiles scare me,” Claude says, explaining her endless fascination with the reptiles.

Among Claude’s more small-scaled oeuvre is cutlery that crawls with forest plants and crustaceans; her first such commission was a 1965 set for Salvador Dalì. Paul Kasmin’s shop is selling an open edition of her Petite Escargot café spoon. “They make very posh baby gifts,” says the gallery’s Polina Berlin. 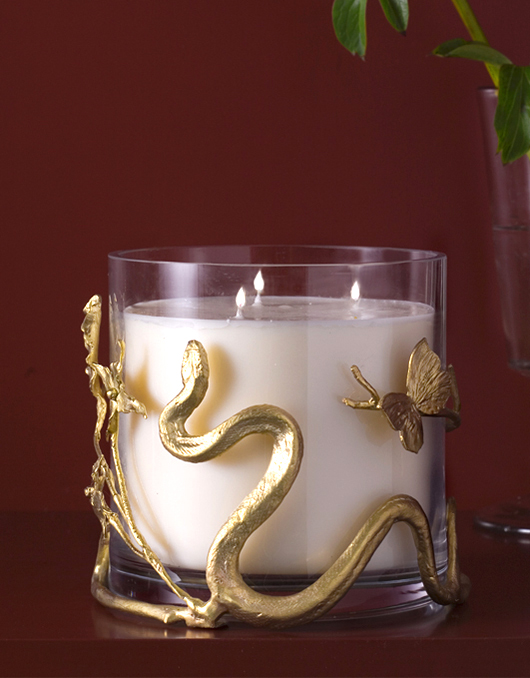 In March, husband-and-wife gallerists Ben Brown and Louisa Guinness, who represent the Lalannes in London — he the art and she Claude’s floral brooches, bracelets and earrings — brought the Lalannes’ work to the European Fine Art Fair (TEFAF), in Maastricht, Holland, for the fourth year running. There, they offered a stunning 1984 Sèvres tea service that Claude transformed with leaves and butterflies of galvanized copper. The artist says now that this is her favorite project out of her entire body of work. (Brown will be mounting a major Lalanne exhibition next June.)

With her dear friend Sandrine Pozzo di Borgo, a third-generation Paris parfumier, Claude has more recently created her most fragrant work to date — a large honeysuckle candle that sits in a holder of sculpted flora and fauna inspired by her voluminous garden. Sold through Maison Gerard, in New York, the hand-finished bronze holder functions as a vase after the candle burns down. (All profits from their sale go to charity.)

Today, dealers will tell you that the market for the Lalannes’ work is truly global, with collectors in Hong Kong and the Philippines as well as America and Europe. “It’s a far cry from when their work fell out of fashion in the 1980s and ’90s,” says Benoist Drut of Maison Gerard. “It really was Peter Marino who brought them back. He defended them and commissioned them right and left for himself and his clients.”

Marino, a noted international architect and collector, remembers his first encounter with a work by the Lalannes. “It was in the 1970s, at Iolas in New York. The work was surreal, edgy and beautiful in a personal way,” he says. He promptly bought a pair of crocodile armchairs. Today Marino has more than 40 Lalannes, many installed by the artists throughout the gardens of his Hamptons home. 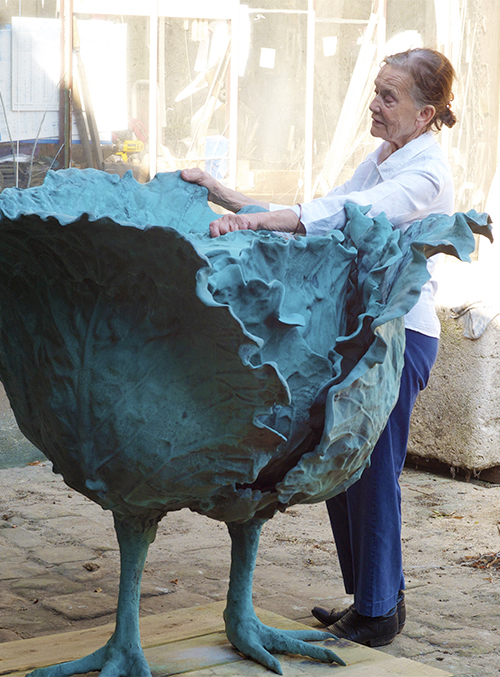 Claude, here seen with one of her signature Choupattes — a copper-and-bronze chicken-footed cabbage — studied metalworking and architecture.

Coach creative director and president Reed Krakoff is another keen Lalanne collector. “I first saw their work 20 years ago in a picture of Yves Saint Laurent in his garden surrounded by a bunch of woolly sheep,” says Krakoff. “I then started collecting their work with my wife, Delphine.”

Krakoff worked with Kasmin and Brown to co-sponsor the couple’s first New York exhibition in 20 years. It opened in 2006 and traveled to London in 2007, a year before François-Xavier’s death. These days, Claude works an hour south of Paris, at a metalsmithing compound on an old farm in Ury, near Fontainebleau, where the couple moved in 1967. It remains abuzz with artisans, plus Doudou and Diva, Claude’s big white Swiss shepherd and harlequin dachshund, and occasional children and grandchildren.

Kasmin photographed the complex over the course of his many visits — he goes every three months or so — and has now published the images in Claude & Francois-Xavier Lalanne: Art.Work.Life. (Rizzoli). “They work every single day,” he says, “from early morning to midday, when they break for a proper lunch of Claude’s old-fashioned French cooking. I know of no other studio quite like it.”

Kasmin reports that Claude continues the ambitious creative output that had been the couple’s way of life. “Some days they work very late,” he says. “She’s amazing — warm, extremely energetic and, as you can see in her work, quite mischievous.”