Frank Stella on Six Decades of Experimentation and Change 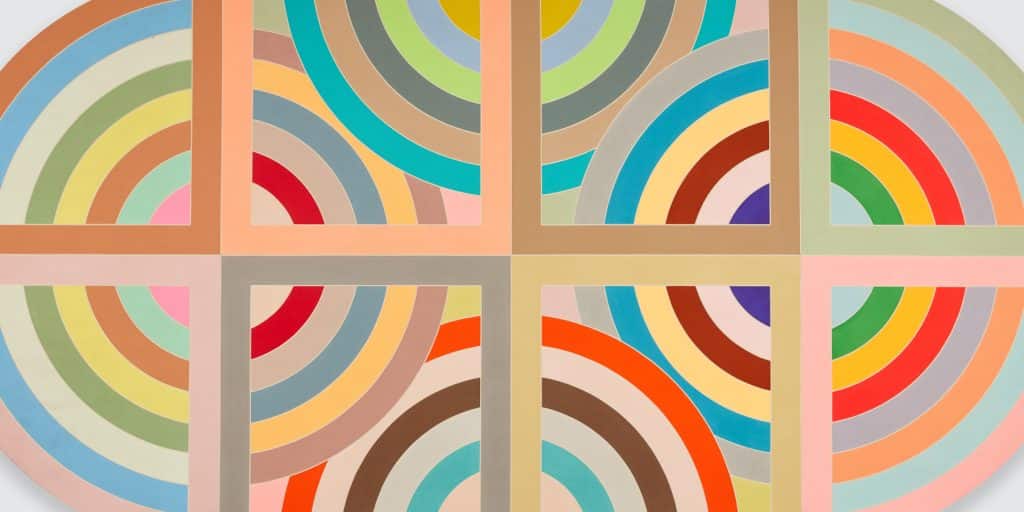 One of the greatest abstract American artists of the 20th and 21st centuries talks to 1stdibs about his latest blockbuster exhibition, currently wowing visitors to South Florida's NSU Art Museum Fort Lauderdale. 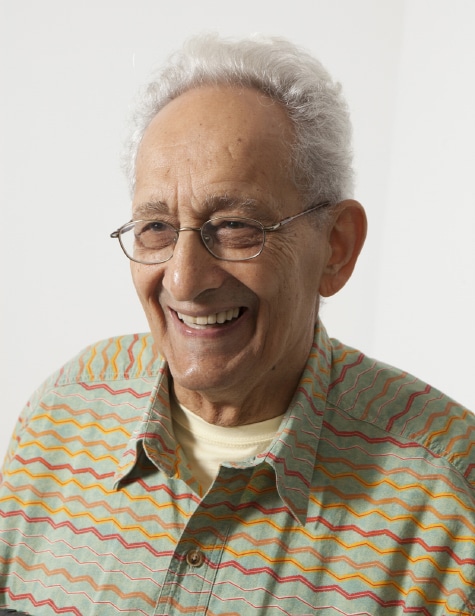 January 22, 2018A new show at the NSU Art Museum Fort Lauderdale presents more than 300 paintings and sculptures by abstract master Frank Stella (above, portrait by Kristine Larsen), some of them never before seen together. Covering the artist’s 60-plus years of work, the pieces on view include 1968’s Hiraqla Variation II (top, photo by Jason Wyche, © 2017 Frank Stella / Artists Rights Society (ARS), New York).

A master of abstraction, Frank Stella has been creating thought-provoking paintings and sculptures for more than 60 years. In 2016, he had an important retrospective at the Whitney Museum of American Art and the Modern Art Museum of Fort Worth, and now comes an even larger show, the 300-work “Frank Stella: Experiment and Change,” on view at the NSU Art Museum Fort Lauderdale through July 8. The exhibition was organized by one of today’s best curatorial minds, Bonnie Clearwater, director and chief curator of the NSU museum since 2013 and, before that, of the Museum of Contemporary Art, North Miami.

The New York–based Stella, now 81, burst onto the scene barely out of college with his “Black Paintings,” sober geometric studies composed of wide black stripes separated by chalky white lines. These won him inclusion in “16 Americans,” the famed 1959–60 group show at New York’s Museum of Modern Art. He stayed in the forefront of art, working with famed gallerist Leo Castelli, relentlessly pursuing geometric form and never repeating himself. By the 1990s, he had moved from sober grids on canvas to ebullient three-dimensional sculptures, a path he continues to follow.

The dynamic duo of Clearwater and Stella sat down with Introspective to talk about art and life.

Frank Stella: Groundbreaking. It will be the largest one-man exhibition ever held in the state of Florida. 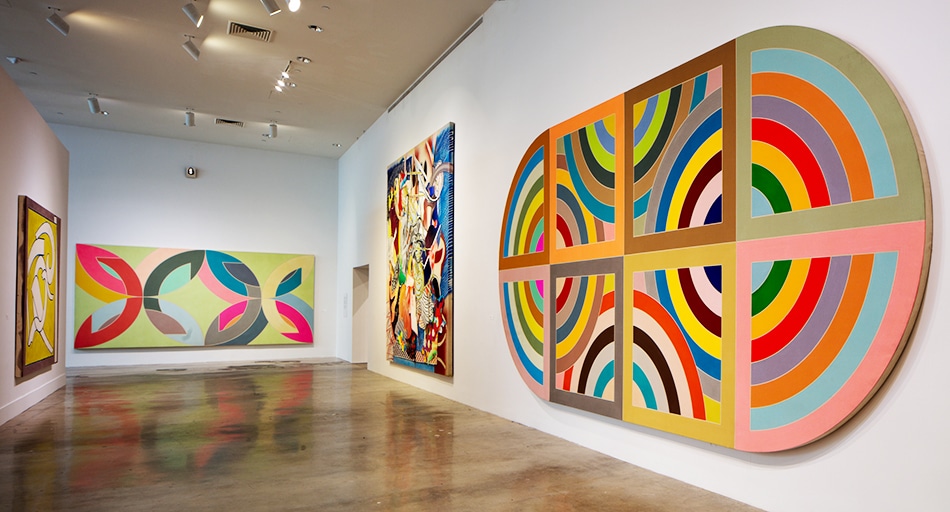 The exhibition — organized by Bonnie Clearwater, the NSU’s director and chief curator — will be up through July 8. Hanging with Hiraqla Variation II are, from left, Kagu, 1976; Saskatoon I, 1968; and Organdie, 1997. Photo by Steven Brooke 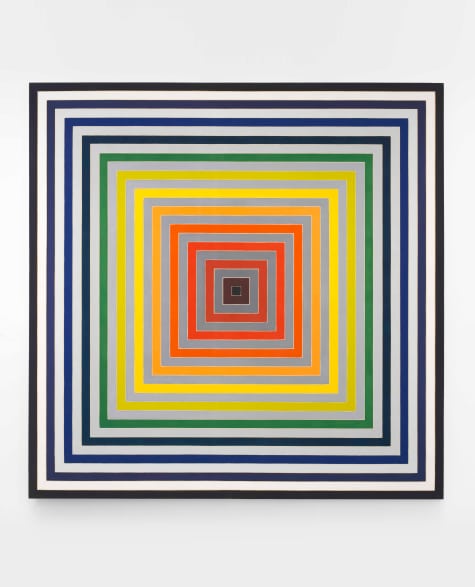 Is that true, or did you just make that up?

Bonnie Clearwater: And who’s going to contest us? Frank?

FS: The number of works is more than three hundred, but we’ll be showing a lot of small things.

Is this the largest show the museum has ever done?

BC: For a solo show, yes. They gave King Tut the whole museum before.

So the biggest for all non-pharaohs. How did this get started? 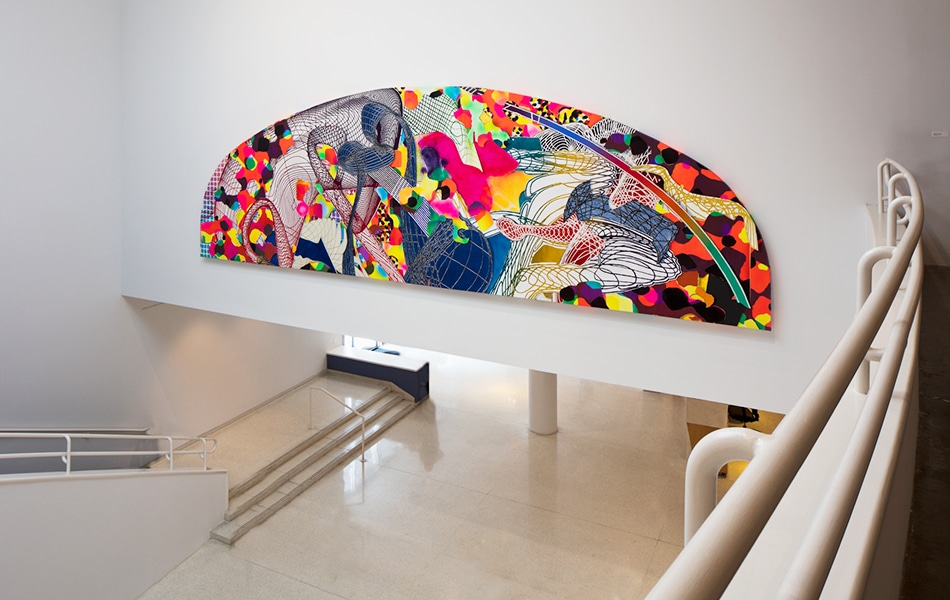 Hooloomooloo 6, 2017, hangs in the museum’s atrium. Photo by Steven Brooke 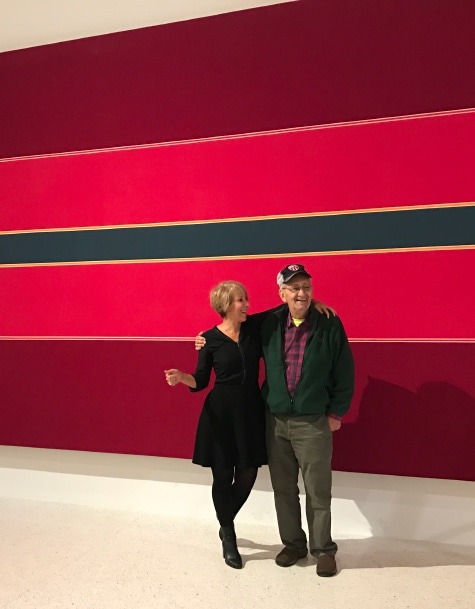 Why go to Bonnie versus someone else?

FS: We were talking, and we had done a show before, in 1999 [at MOCA North Miami]. That worked out nicely.

What was good about that experience that made you want to do another one?

FS: There was not a lot of pressure. It was just open and kind of free.

And what was the spark for this show?

FS: There are a couple of big things in this show that haven’t been shown before in institutions. That was the starting point.

One of those big things is Deauville (1970), a forty-five-foot-long painting shaped like a racetrack.

BC: He made the two racetrack paintings, and they have never been seen together since they left the studio.

FS: With a friend, I started going to the track. And it got to be interesting to see the horses. It was a new world, and I met the well-known collector and patron of the Pasadena Museum of California Art Robert Rowan. His brother Lou was a thoroughbred breeder, and he sold me a horse in return for a painting. 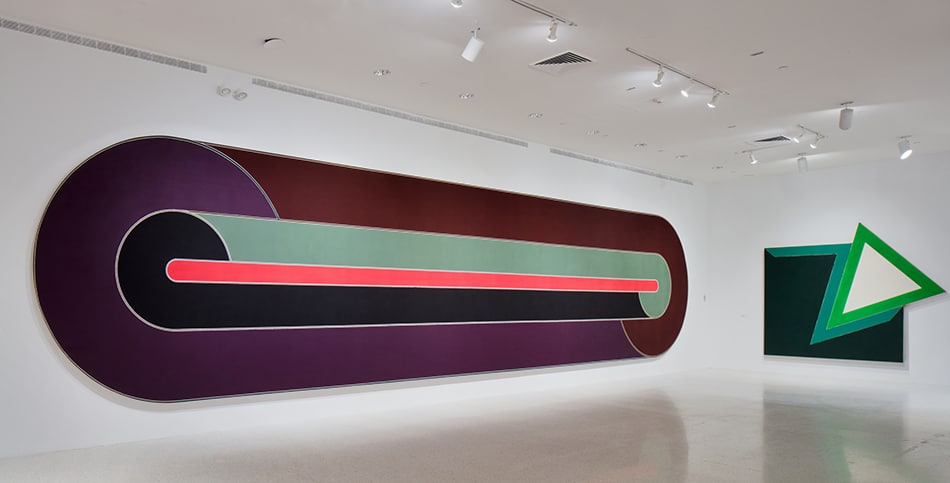 Deauville, 1970 — the other of the two large-scale racetrack paintings in the exhibition, which are being shown together for the first time —  hangs next to the 1966 work Moultonboro II. Photo by Steven Brooke

I bet the painting appreciated a lot, and the horse eventually passed away.

FS: Oh, well, everybody passes away. But it was a very fair deal.

Was it a good horse?

FS: She was pretty good, not great. I mean, the painting wasn’t that great. That was the end of the protractor paintings, which were based on curves, and Deauville was just literally stretching the idea out, that’s all.

Shaped, irregular canvases are one of your hallmarks.

FS: Now, everything artists make is shaped. Conventional formats are relatively rare. Everything’s an installation or something like that. So, the irregularity sort of blossomed.

BC: The curve wants to have space. But this is decades before Frank started making three-dimensional works. Now, I look at those curved works, and they’re so obviously connected with the forms from the nineties, the big wall reliefs with the lattices and curves and bamboo forms.

Stella was an early adopter of shaped canvases, as can be seen here in Suchowola 1, Suchowola II, and Suchowola III, all from 1973. “Now, everything artists make is shaped,” he observes. “Conventional formats are relatively rare. Everything’s an installation or something like that.” Photo by Steven Brooke 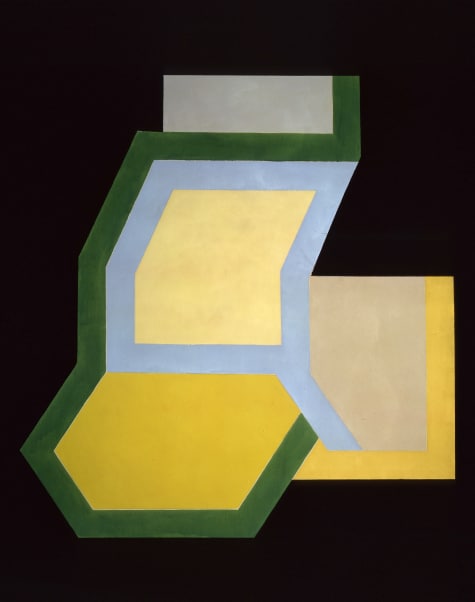 What will we learn about you from this show?

FS: There are some leaps‚ but the show reveals a working process, and you’ll see how things develop. A lot of people like to think that artists are creative or inspired, but actually they have to work.

Bonnie, what do you think are the discoveries here?

BC: We have included works related to the “Black Paintings,” like Delta [1958]. In one way, the “Black Paintings” resolved certain issues, and they were perfectly resolved. But then it hit me there were a lot more questions he had, and this is how he kept going.

There’s so much variety in your work, Frank.

BC: Ours is a solo show that’s going to look like a group show.

FS: That’s probably true from the outside. But I think that’s one of the advantages when we show the drawings and the working archives — the continuity will show up a little bit more.

BC: It all makes sense when you see it together. But also, one of the things I am interested in is the outtakes, the misfits. Why did an artist not continue in a certain way, or why do these misfits now seem prophetic? Frank, one of the important things for people to see is the playful, free side of you. 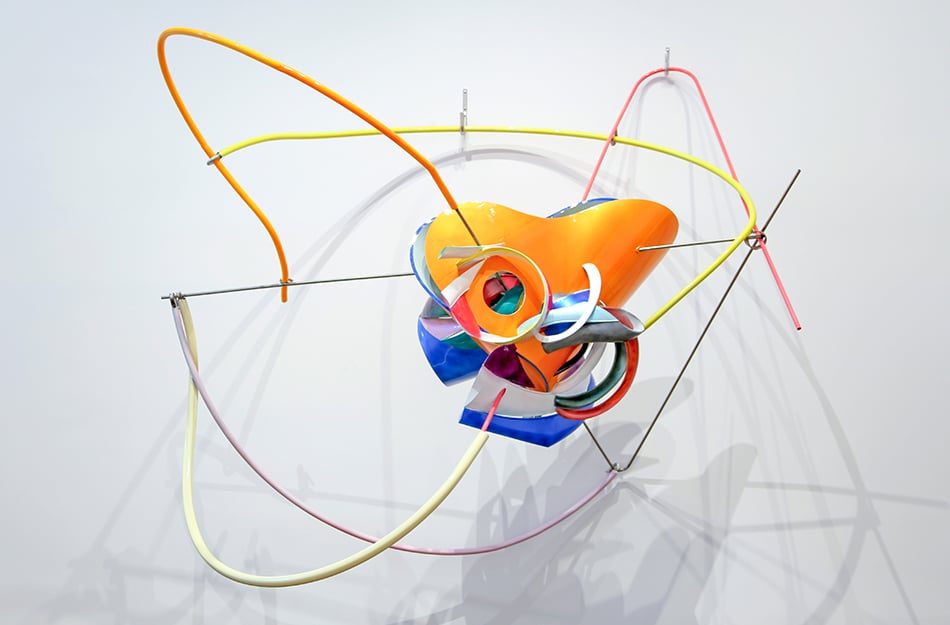 The three-dimensional works in the exhibition include K.144, which Stella made in 2013. Photo by Jason Wyche, © 2017 Frank Stella / Artists Rights Society (ARS), New York

FS: No. It’s hard to imagine comedians laughing at their own jokes [laughs].

Why do you two get along?

BC: I don’t bother him, he doesn’t bother me. I like to get my answers out of the work. I don’t think he would tell me the truth anyway [laughs]. It really comes down to looking, and he really wants you to look at the work and get the reading out of the work.

Frank, is there another time that you thought you really melded well with a curator?

FS: Well, I wouldn’t have a career if weren’t for [former MoMA director] Bill Rubin. He knew exactly what he wanted. He liked the work. And he happened to be in a position to do something about it.

The show doesn’t shy away from hanging paintings like Perfect Day for Banana Fish, 1958, with three-dimensoional works, including wall sculptures, such as, from left, Cetology (C-29, 2X), 1991; Anderstorp, 1981; and Leewarden II, 2017. Photo by Steven Brooke

FS: Yeah. We did two, actually. Bill did a second show, too [in 1987], and that was a big deal. The Museum of Modern Art — in my generation, you wouldn’t have bothered becoming an artist if you didn’t want that. That’s what you cared about.

BC: It’s amazing, though, that you were twenty-three when you got included in “16 Americans.”

FS: Yeah, the curator, Dorothy Miller, saw my painting. And Leo Castelli called me up and said, “Dorothy wants to put your paintings in the Museum of Modern Art.” I said, “I don’t really want to do that, Leo.” I assumed that I was going to be in the cafeteria where they showed young artists, and I turned her down on the basis of complete stupidity. Anyway, I finally gave in under pressure. It turned out she was doing these American shows — “14 Americans,” “15 Americans” — and she counted it up, and she only had fifteen again. She couldn’t do another fifteen. She needed one more. I was the sixteenth American. 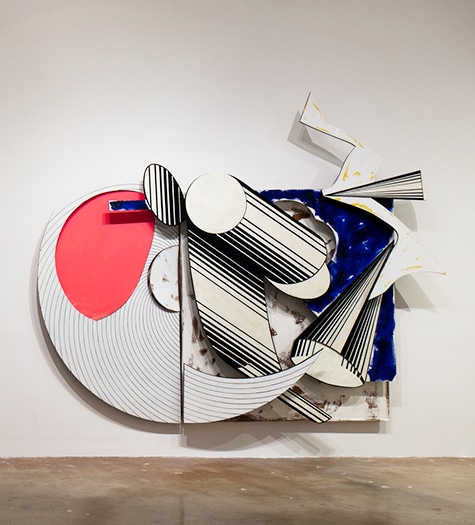 What do you think has supplanted MoMA for the people who are thirty years old. Is it the Venice Biennale, Documenta or some other international venue?

FS: You actually raise a good point. I think they’re pretty much enchanted with that quote-unquote international lifestyle — the big scenes. Go to Cologne or go to Venice.

BC: I don’t think anyone pooh-poohs getting shown at MoMA.

Frank, at eighty-one, are you in the studio every day?

FS: No, but I don’t have to be in the studio to be working.

BC: Do you dream about your work?

FS: I don’t dream about art much at all. My dreams always had an element of hope in them.

FS: Well, hope is what you need to be an artist.