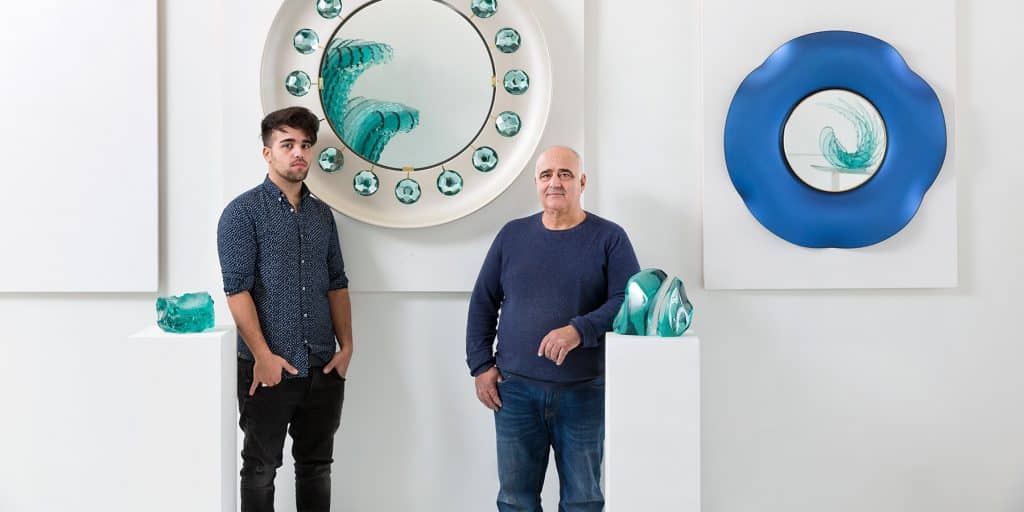 December 2, 2018Twenty-five-year-old glass artist Domenico Ghiró has dark brown eyes and hair cropped close to his head except on top, where an extravagant shock sweeps across his forehead like a tsunami. A youthful affectation? Perhaps. But this wild tonsorial wave also suggests an abandon and intensity that belies his shy, reserved demeanor. In contrast, his father and glass mentor, 61-year-old Michele, is small and round, bright-eyed and loquacious. 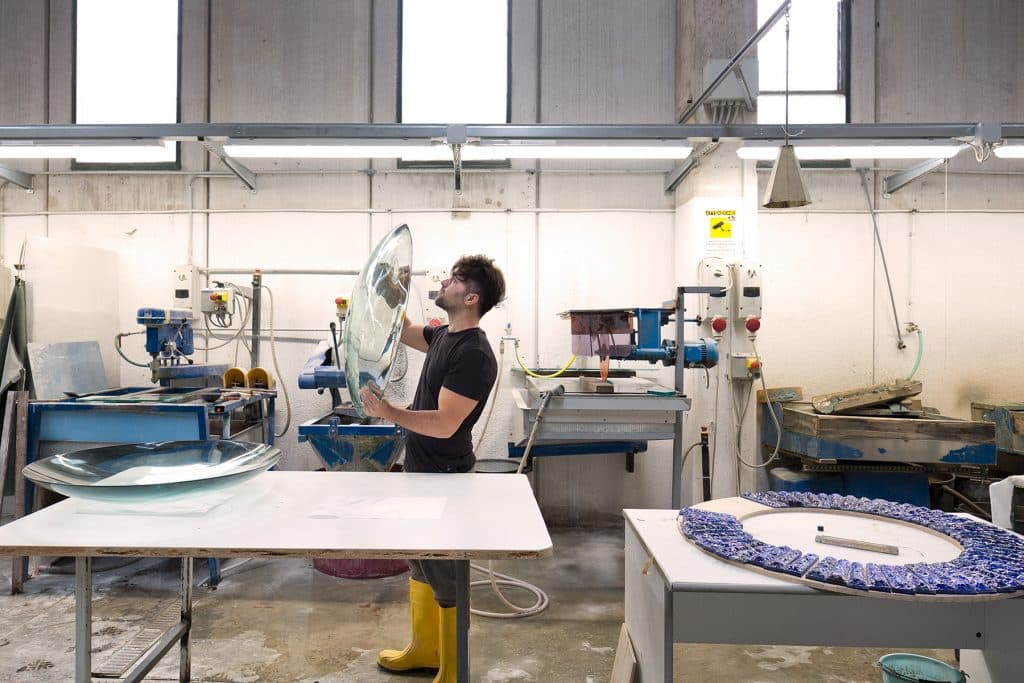 Domenico Ghiró examines a concave glass disc at the Ghiró Studio workshop outside of Milan. Top: Domenico and Michele Ghiró stand in their gallery.

As they conduct a tour of Ghiró Studio, in the municipality of Pieve Emanuele, about eight miles south of Milan, Michele does most of the talking. But it is Domenico’s fertile imagination that conceived the majority of works on display: biomorphic sculptural forms mounted on brass stands; a design for a fountain with six-foot glass panels evoking sprays of water; round and square mirrors surrounded by sunbursts of jewel-toned glass; slender, statuesque lighting. It is abundantly clear that this young man is totally immersed in his medium. “My social life has suffered,” he admits. “But I don’t come here to work. I come here to have fun and explore.”

The studio’s origins go back to the mid-1990s.That’s when Michele, an emerging talent, began working in the atelier of internationally renowned glass artist Giorgio Berlini, who, starting in the 1960s, collaborated with Salvador Dalí, Luciano Minguzzi, Piero Fornasetti and other creative masters. Michele, who still designs some projects and advises on the technical aspects of most, eventually assumed control of Berlini’s business and, in 2004, established his own studio. There, he set up the Glass Academy to teach and preserve traditional glass-making techniques and also produce gifts and accessories, as well as continue to participate in collaborations with, among others, Barnaba Fornasetti, Roberto Rida and artist-poet Bruno Fael. In 2014, Michele moved his operation to its present, larger location. 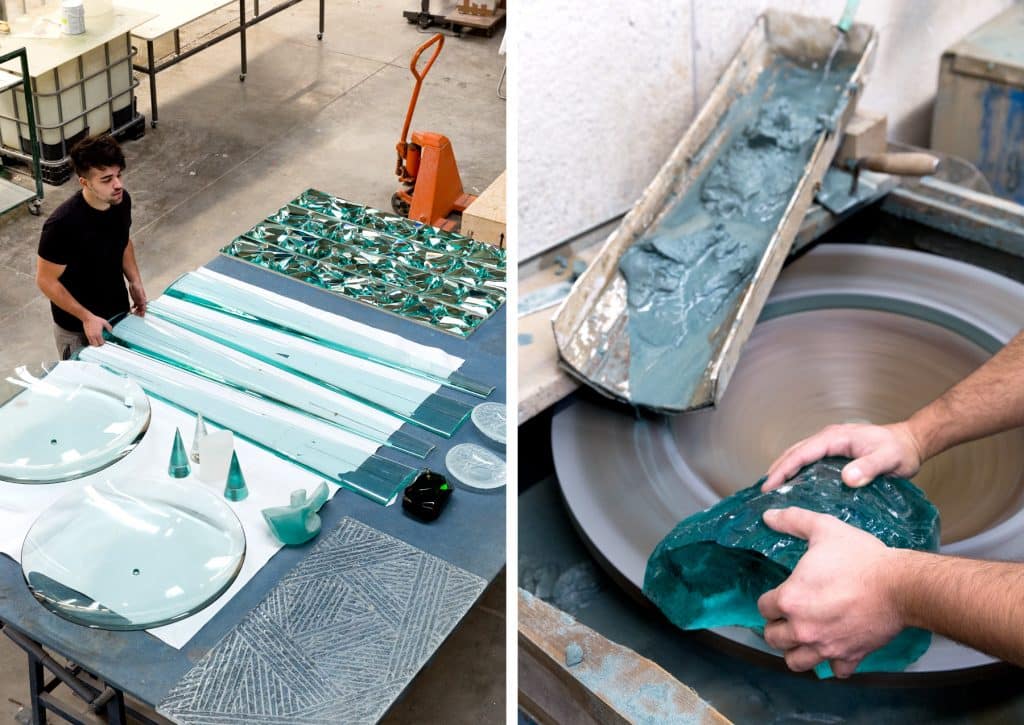 Left: Domenico Ghiro stands before a table topped with pieces of two torchères. Right: Domenico grinds a block, or “rock,” of glass.

Domenico began working in the studio when he was 17. “I was hungry for knowledge and spent day and night here,” he says. The Glass Academy closed after 10 years. “For me it was a great sorrow,” says Domenico, “because it is precisely there that I grew up as an artist and a person, from there that the love I feel for this craft was born. I could not allow all the work of my father’s life to be lost.” So, Domenico reimagined the studio, focusing it on furniture, lighting and artistic commissions created through his more modern lens but leveraging Michele’s knowledge and technical mastery. “What survives are the techniques,” observes Domenico. “But the designs are all new.”

Those designs show up in high-end projects, such as a luxury hotel in Dubai; in products developed for other designers and artists; and on 1stdibs, sold through such dealers as Donzella, Lost City Arts and London’s Charles Burnand. At this year’s Salon of Art + Design, in New York, Paul Donzella showed a low table inspired by Mayan architecture. It featured iridescent glass panels hand-carved with fanned patterns and united within a polished brass matrix. “The work done by this studio is like no glass craftsmanship I have seen from any other contemporary glass studio,” says the dealer. “While most are focused on blown and cast glass, these guys are doing something totally different and exciting, in many cases repurposing cast-off slag glass. It’s impossible to look at one of their pieces and not see all the handwork in it.” 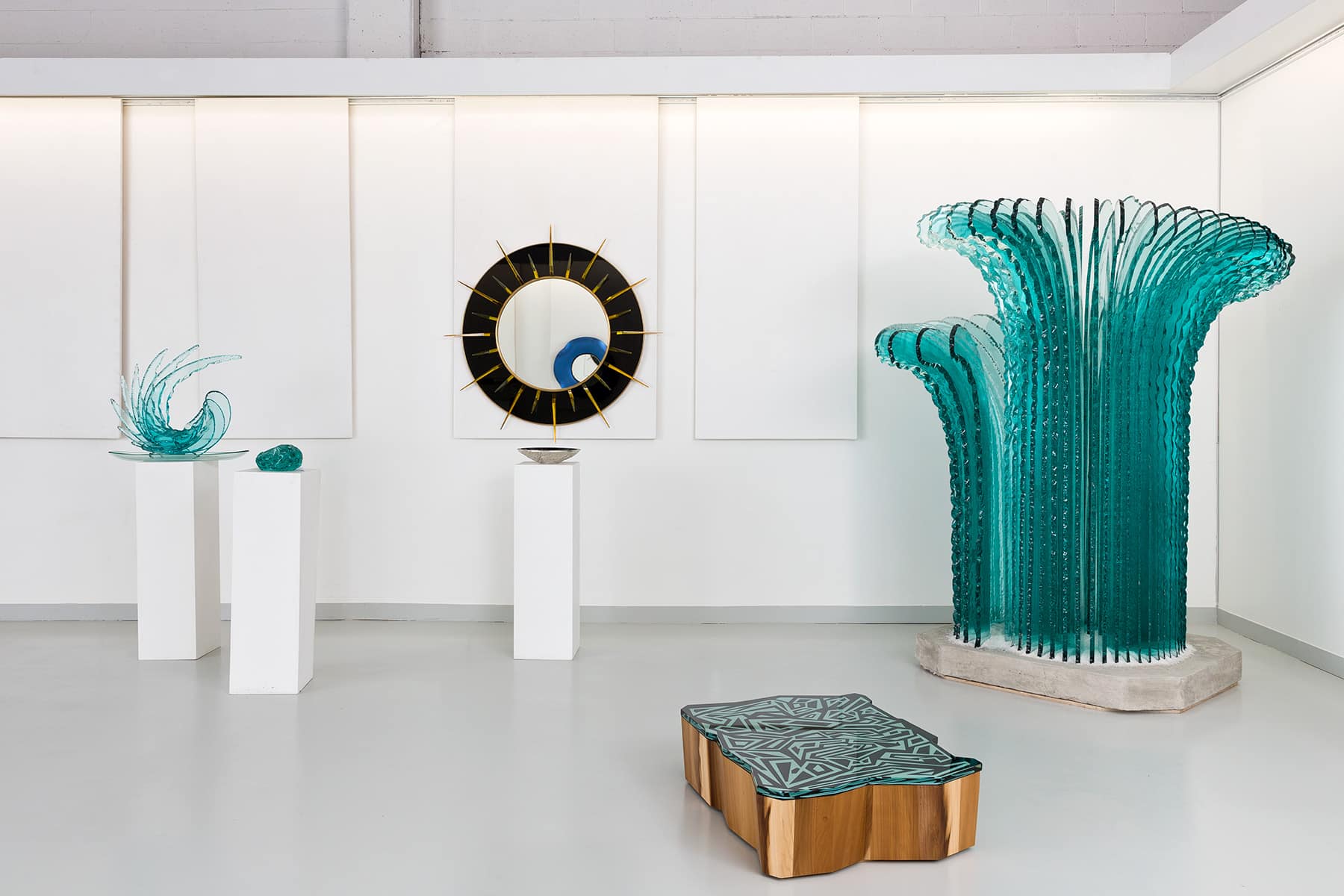 TheGhiró Studio gallery features a variety of works, including a fountain-like piece with six-foot glass panels evoking sprays of water.

A variety of  works are on display at Ghiró Studio, including a fountain-like piece with six-foot glass panels evoking sprays of water.

The Ghirós’ pieces even adorn personal retreats, like the private chapel in Desio graced by a 240-inch-tall crucifix that Michele designed. They have won several awards, including one for best emerging artist presented in 2014 by the Italian newspaper Corriere della Sera.

Given the fluidity of their work, it is surprising that the Ghirós don’t use casting, which facilitates free-form creations. How do they achieve such liquid grace and sensual tactility? “Normally, here, no one enters,” Michele says, almost in a whisper, before admitting this reporter into the workshop’s inner sanctum. Behind the showroom wall is a row of machines, some dating to the late 1940s, most of which grind and polish glass to different degrees of coarseness and smoothness.

The Ghirós work with two types of glass. The first is blocks, or “rocks.” This is cooled molten glass that has accumulated at the bottoms of factory kilns and been cut up and removed. The father and son purchase the pieces as a raw material. Then, says Domenico, “I look at the glass and see what it wants to be.” Sculptures and functional objects emerge, impossibly, through the old-fashioned use of chisels and hammers. Because the glass is laid down in layers in the kilns, Domenico notes, “you can work on a piece for days before you discover there is a fault or crack. Then, it must be re-formed so it won’t break.” Another risk arises when grinding the piece to the desired smoothness and polishing it, because, he explains, “you’re heating up the glass.”

The second type of glass the Ghirós use is old and new slabs, or plate. This is not your run-of-the-mill window or sliding-door material: Michele and Domenico look for slabs of thicknesses and colors that are rarely produced nowadays. These are cut, the pieces sometimes slumped in an oven to achieve a curved profile, then worked like the block glass — that is, repeatedly ground and polished. So, the free-form shapes, sinuous turns and sensuous waves of their sculptures, mirrors and other objects are achieved by painstaking carving and grinding rather than by blowing or pouring molten glass into a mold created out of much more easily worked material. 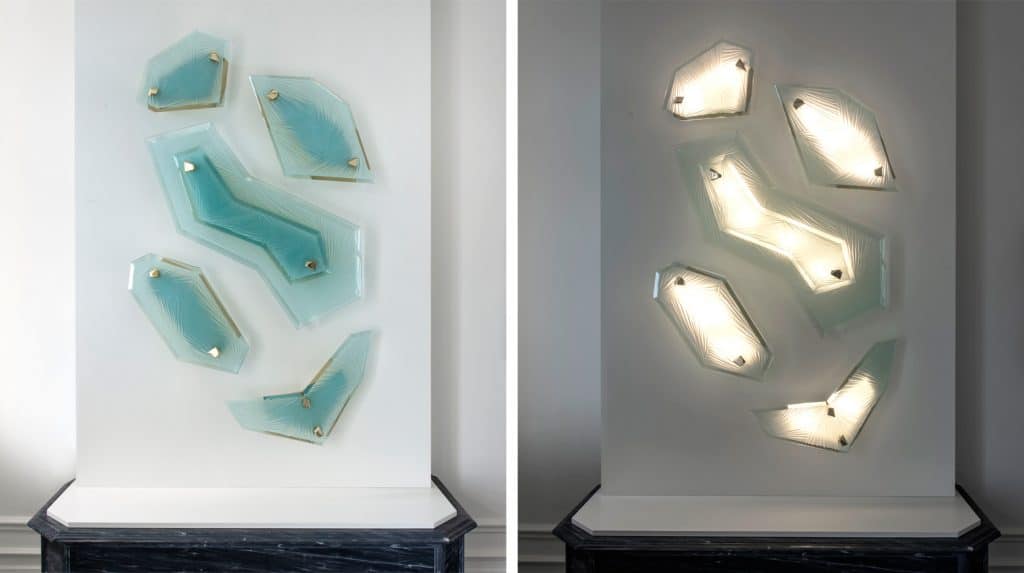 Domenico Ghiró created these brass-and-carved-glass Cenote Sculptural Sconces, shown with the lights both on and off, which Charles Burnand featured at Salon Art + Design. 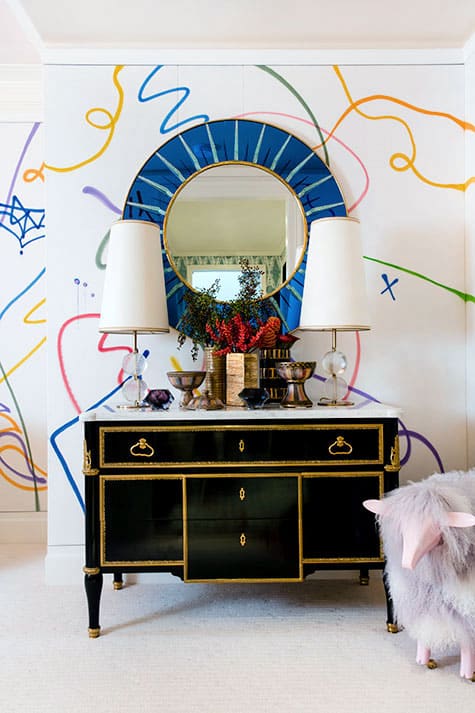 Phillip Thomas deployed a Ghiró Studio mirror in his room, which was loaned by Donzella, at the 2016 Kips Bay Decorator Show House.

On a table in the workshop are various pieces of two torchères. Each will be composed of two tall sections that taper from a thickness of almost an inch and a half at the base to about half an inch at the top. Precariously balanced atop these will be shallow LED-lit concave glass discs 30 inches in diameter, each weighing about 50 or 60 pounds. The labor required to produce these components is extraordinary. It might take two weeks of bending over a grinding machine with a piece of glass so heavy it must sometimes be held and manipulated against the grinders by four men. “At one point, it was a complete drain, and I had to stop,” admits Domenico. “I couldn’t even hold my cell phone without my hands shaking.”

The compulsion to create and experiment evidenced by his artistic process is precisely what makes Domenico such a fascinating talent. “Watching Domenico evolve as a designer has been exciting for me,” Donzella says. “He’s young, focused and very driven. His inspiration comes from many different places and he’s never afraid to tackle huge obstacles to achieve the end result he envisions. It’s really encouraging to see someone so young create work that is this sophisticated, elegant and complex.”

Michele is often the voice of practicality in the design process, bringing Domenico’s flights of fancy down to earth by grounding them in his knowledge of technique, balance and engineering. Such tempering is necessary because Domenico tends to design on a large scale, believing this can transform something like a torchère from mere lighting into a work of art. “For me, you need to think big,” he says. “The Duomo and the Eiffel Tower were conceived this way.” His father just smiles. 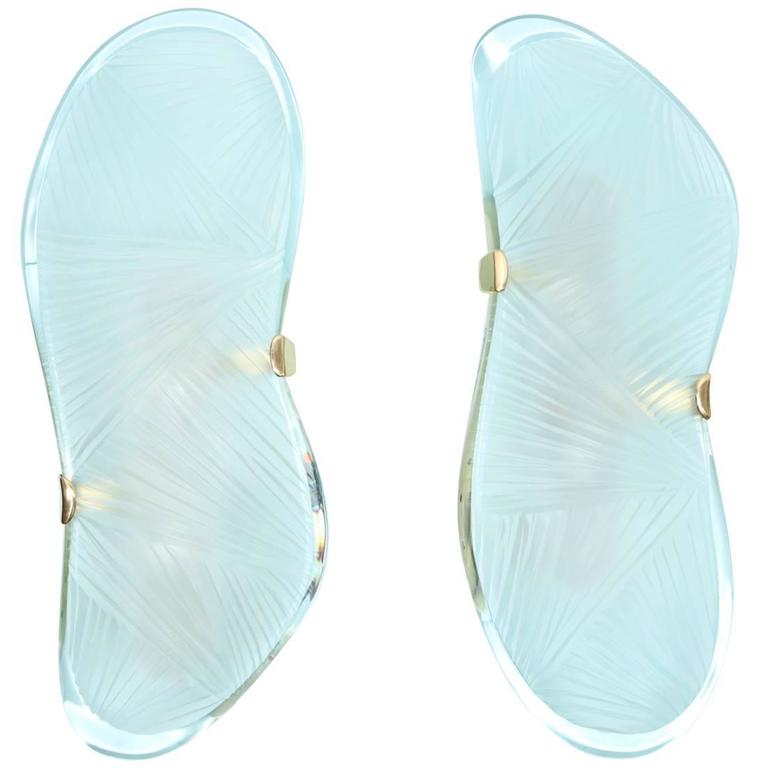 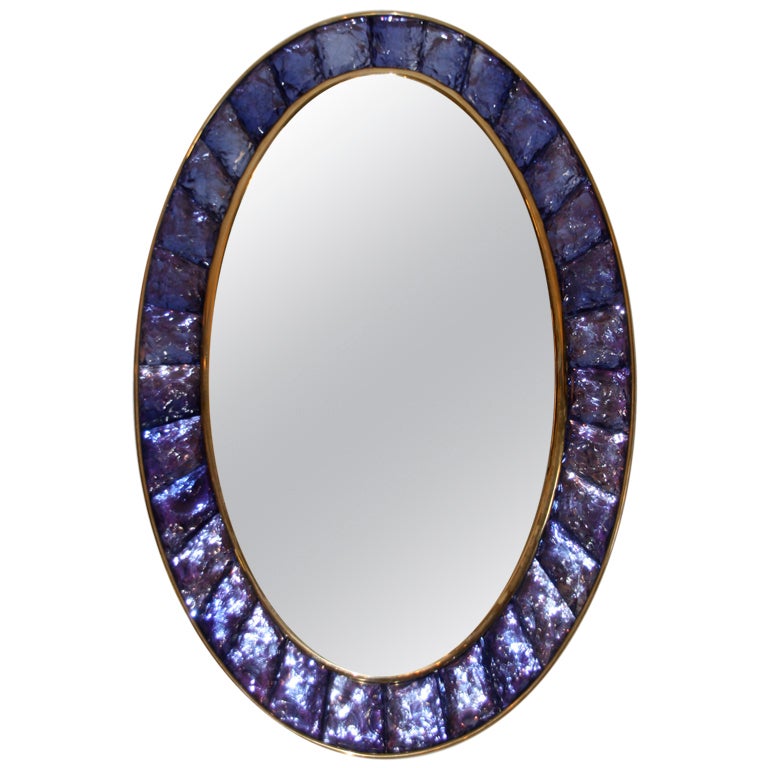 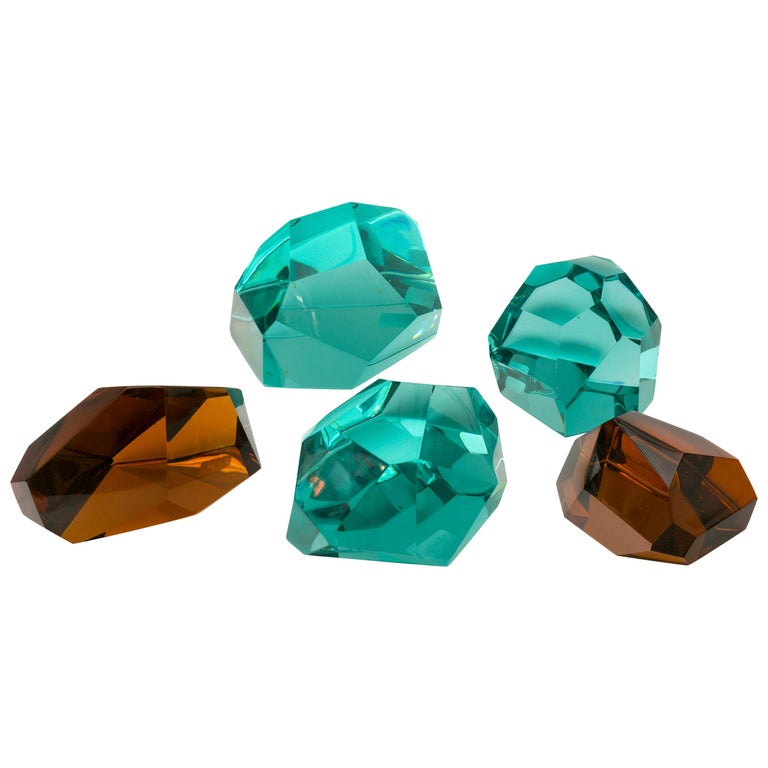 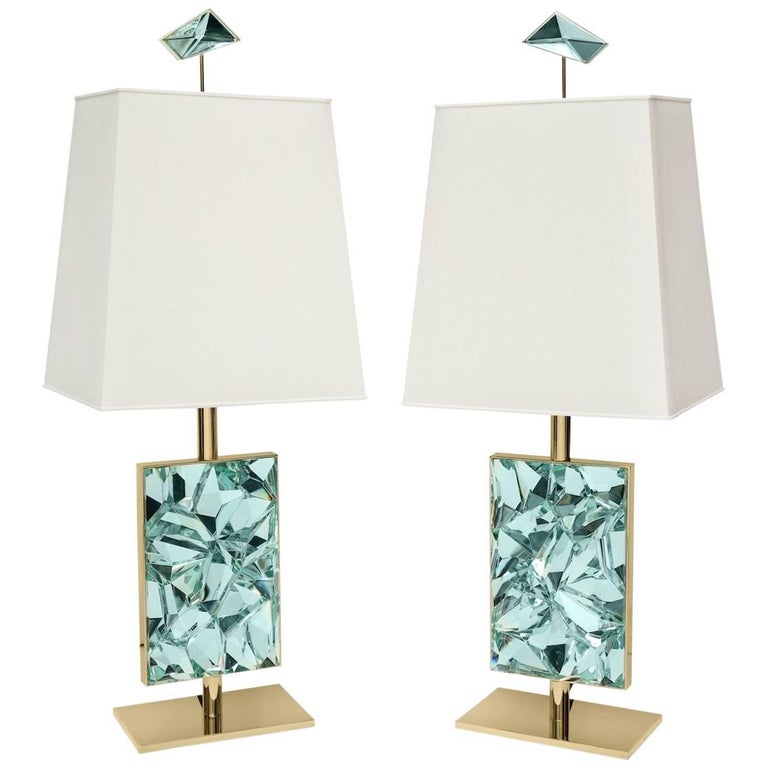 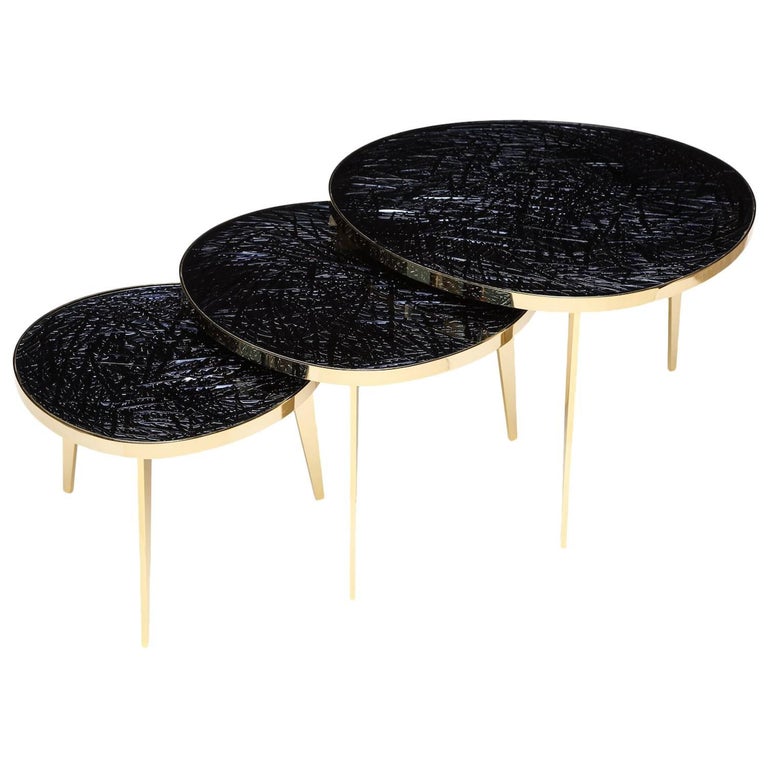 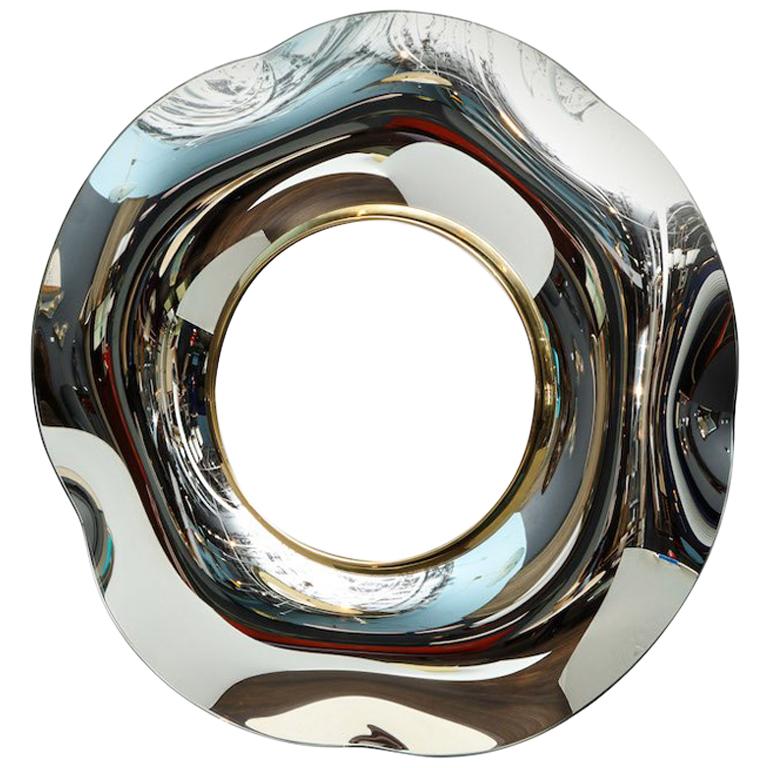