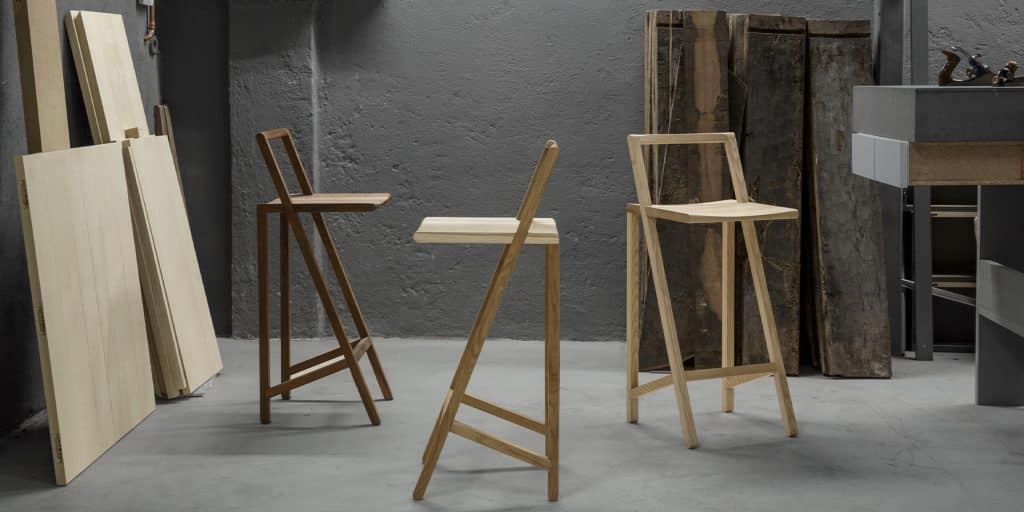 The designer creates furnishings — and exquisite kitchens — that are as informed by contemporary architecture as they are by traditional craft technique. 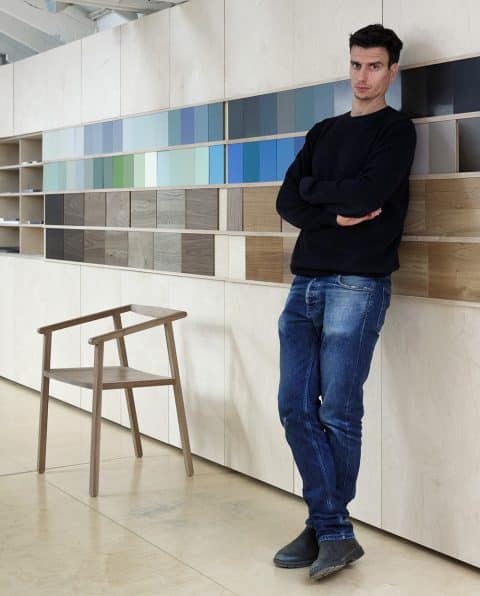 December 15, 2019“I think of furniture as small-scale buildings,” say Milan designer Giacomo Moor, seen here with a chair from his Acollection. Top: More pieces from the collection, on view in his workshop.

Giacomo Moor is a master woodworker, but his furniture is about more than craftsmanship. It’s impossible to look at his work and not recognize his deep fascination with architecture. Consider his Pivot collection for SEM. The etched-brass frames of the minimalist desks, consoles and cabinets evoke the steel bones of skyscrapers, while their elm-wood compartments cantilever out asymmetrically like the terraces of a contemporary high-rise, such as the plant-covered Bosco Verticale residential towers of Moor’s hometown of Milan.

“I think of furniture as small-scale buildings,” Moor says. “When I see a building I love, I see a table, a console, a bookcase. My imagination takes off. Then, in my woodworking, I pay special attention to the joints, to make sure they have an architectural quality.” 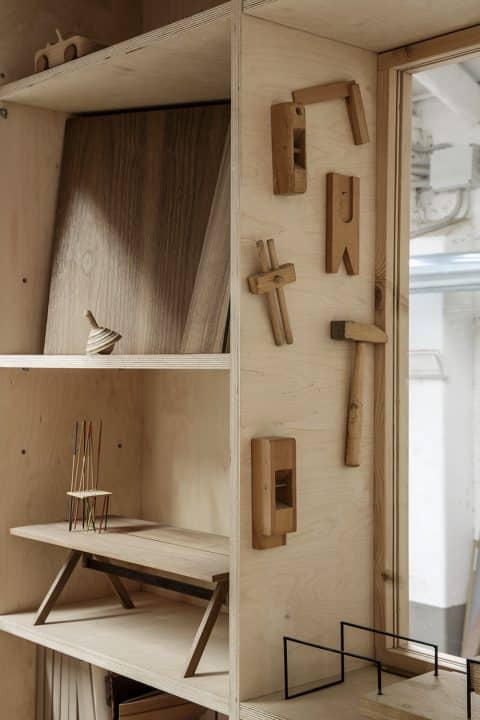 Moor has decorated his own office with traditional joinery tools, hanging on the wall next to the window, and, on the shelves, various models made by the artisans who work for him or by his own two hands.

At 37, Moor is among the younger fine woodworkers in Italy, where most of the practitioners are octogenarians. He couples craftsmanship with an academic background in design, calling on both in creating not only furniture but entire rooms — modern and minimalist in style, encompassing both wood and other materials. Boasting an extensive roster of clients in Europe and beyond, his Milan-based studio produces bespoke interiors, commercial designs for such companies as Acerbis and YOOX and limited-edition collections for design galleries.

Moor grew up in Brera, the artistic heart of Milan. As a child, he played tennis and soccer, the latter in the square in front of his house, in addition to working at a nearby newsstand. “I was restless, always looking for something to do,” he recalls. In high school, his mother suggested that he apprentice with a cabinetmaker to keep busy. The experience ignited a passion. 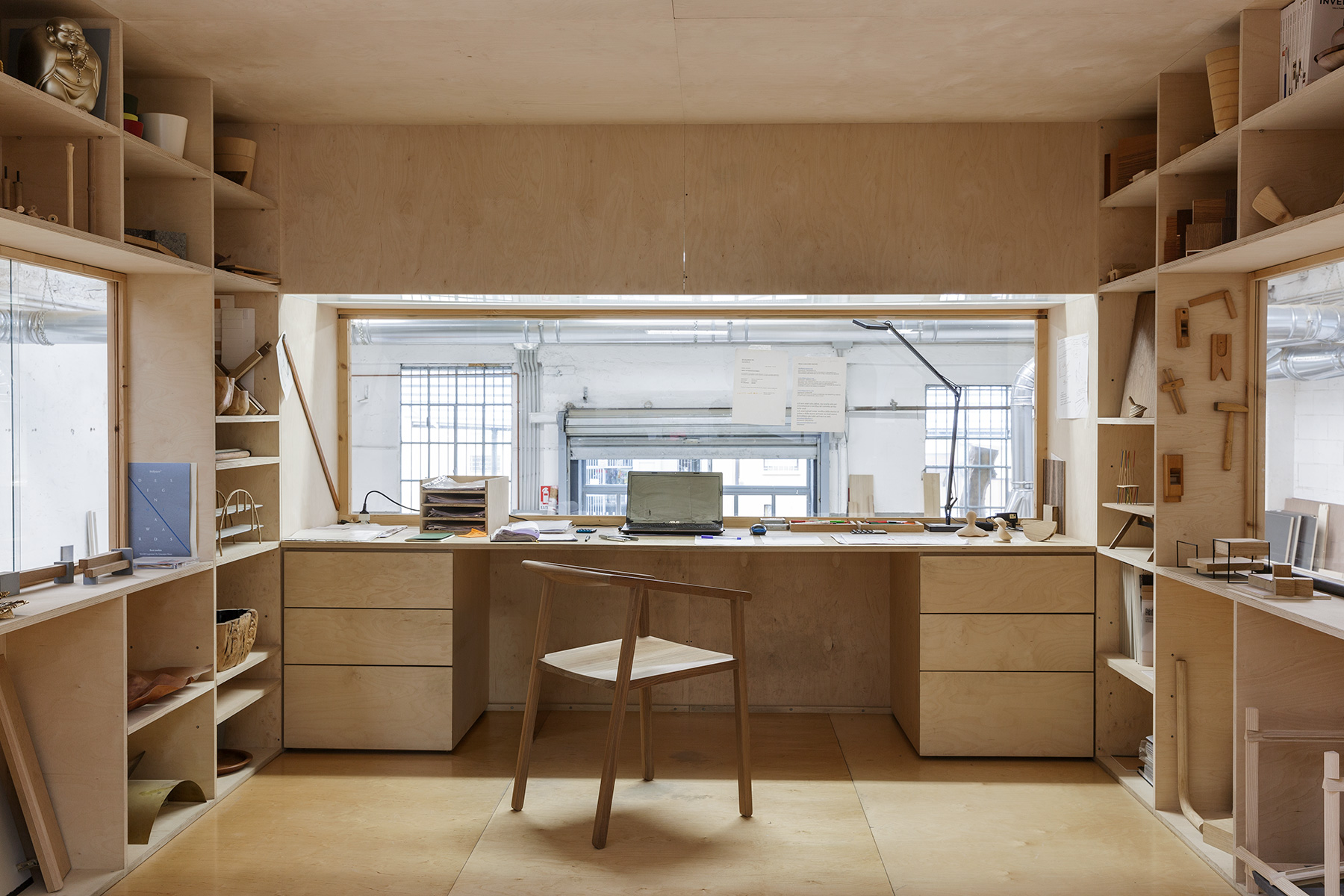 A wider view of Moor’s office reveals how its windows look out to the workshop.

After high school, he studied design, including the history of architecture, at the Politecnico di Milano. There he discovered some of the creators — mainly contemporary — who would influence his style. Among these was Konstantin Grcic, like him, a cabinetmaker by training; Ron Gilad, to whom he was drawn “for the purity of his work and his subtle details”; and Jasper Morrison, emulated “for his minimalism and rich simplicity.” 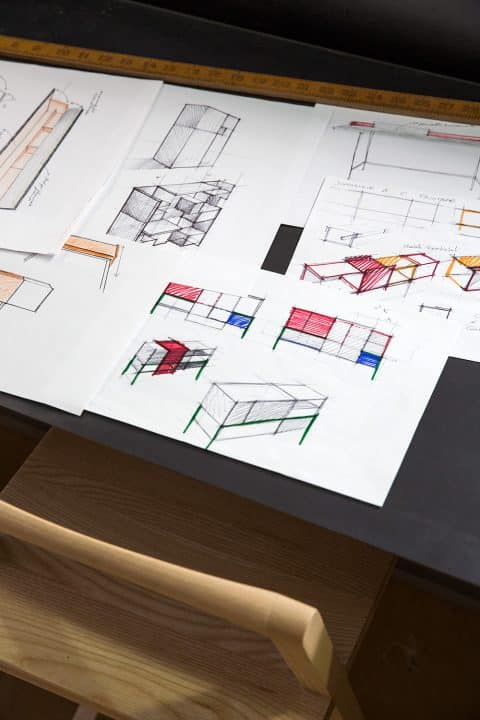 A desk displays sketches for various Moor pieces: items from the Ladin collection for Busnelli, the Ghostwriter desk for Acerbis and Tabernacle, commissioned by Wallpaper magazine and created in collaboration with Emmemobili.

Immediately after graduating, he went into business, working on commission. “At the very beginning, I had other artisans fabricate my pieces, because I didn’t yet have the money to acquire my own machines,” he says. “I knew I had to establish my own studio as soon as possible, because I was driving the artisans crazy with my demands on every little detail.” He opened his workshop in 2011 and quickly developed a reputation in the design world. In 2016, he was nominated for an Elle Deco International Design Award in the Young Design category, and that same year won the Best Young Designer award at Milan’s Salone del Mobile.

These accolades recognized Moor’s meticulous approach and innovative techniques, both in evidence in his Palafitte collection. Inspired by stilt houses, the pieces are made of glass, brass and, notably, bamboo, the material used to raise those structures above water. The designer glues thin layers of the woody stems together into sturdy sheets that he shapes with a lathe into forms that mimic natural bamboo rods, with their characteristic nodes. 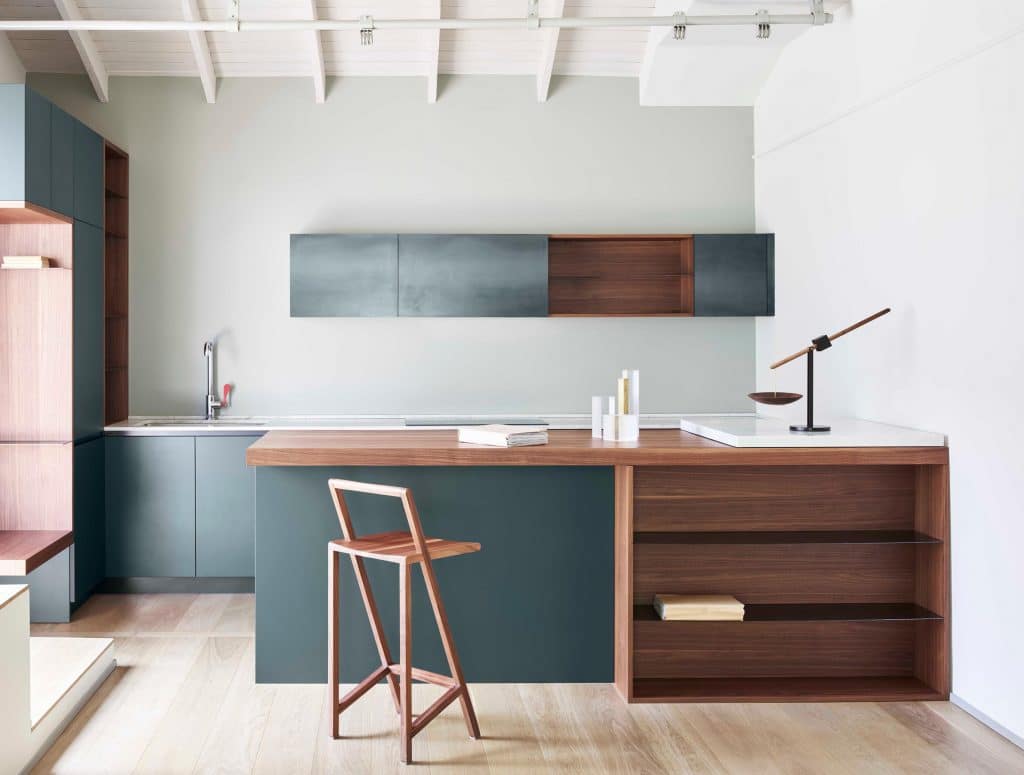 In addition to designing artisanally crafted wood furniture for his own collection and for such brands as SEM, Acerbis and YOOX, Milan-based creator Giacomo Moor conceives entire interiors, with a particular focus on kitchens, like the one seen here. Photo by Omar Sartor 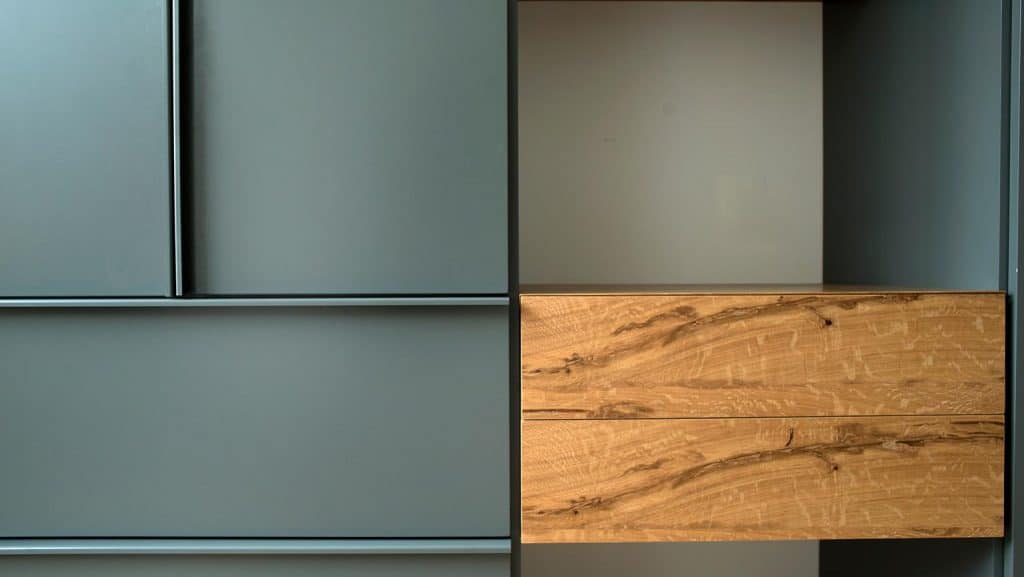 A detail shot of a kitchen from Moor’s Oblò collection shows off his use of salvaged oak beams and extra-matte lacquer finishes. Photo by Iacopo Carapelli 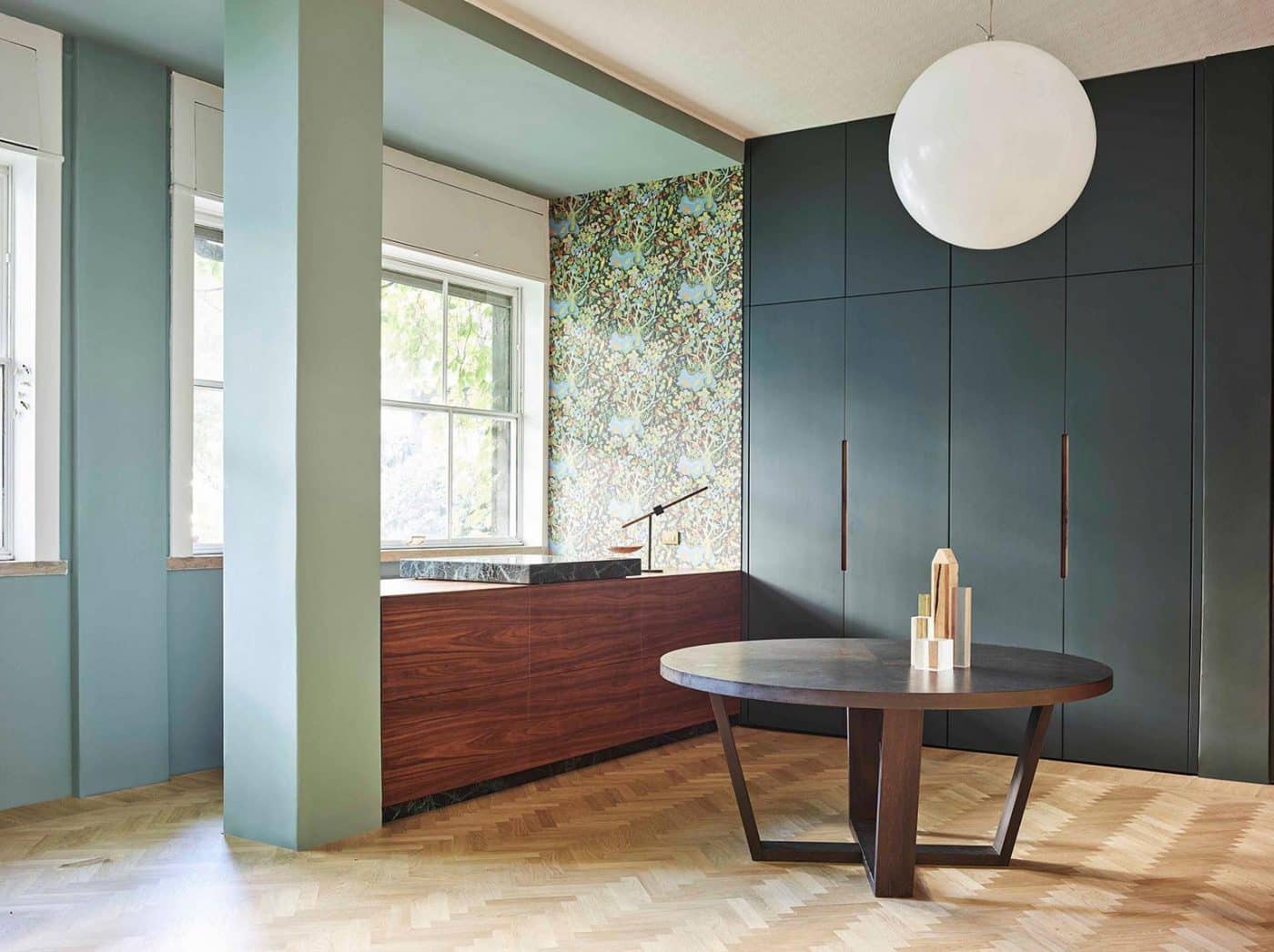 For another client, Moor designed a kitchen in disguise. On the countertop, the stove and its integrated exhaust hood hide under a sliding cutting board of Verdi Alpi marble, while the tall doors in the wall swing open to reveal storage and work space. Photo by Omar Sartor 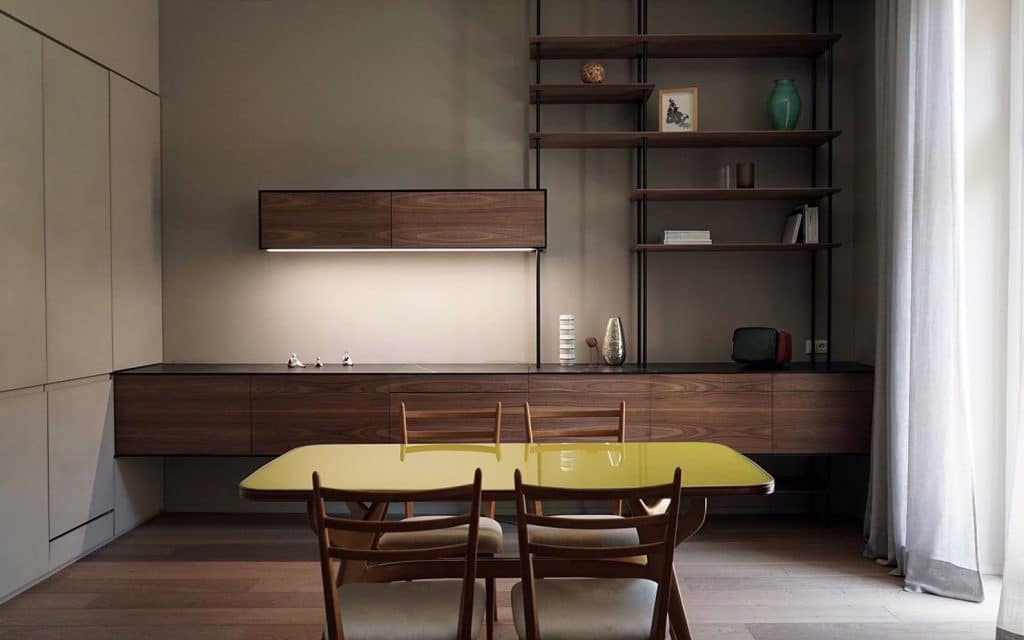 The built-in furnishings of another custom kitchen perform a similar sleight of hand, the sleek countertops and cabinetry providing scant hint that meals are prepared here. Photo by Iacopo Carapelli 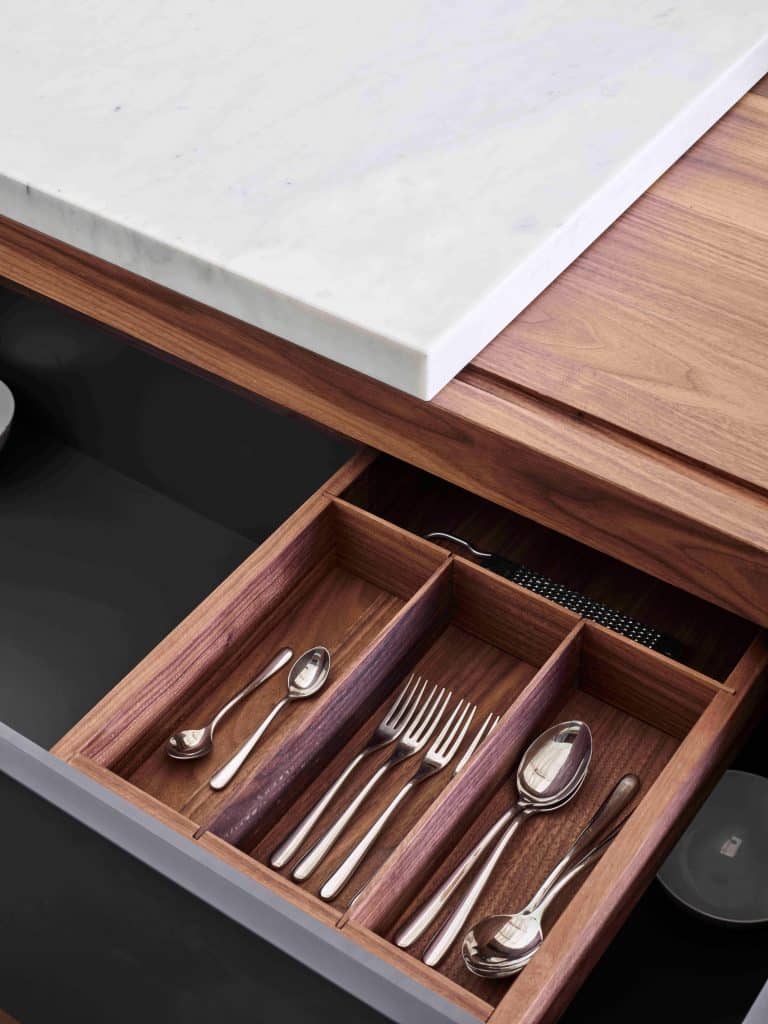 These nodes support shelves of sandblasted glass that are reminiscent of rice paper. “Glass, with its qualities of both absence and presence, is the perfect partner for wood,” Moor observes. 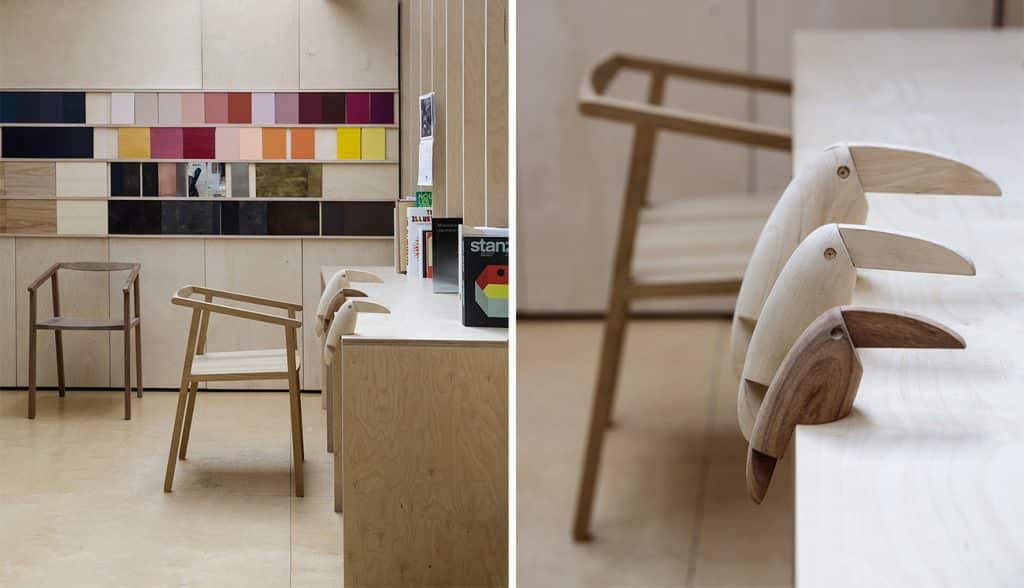 Left: In the workshop’s materials library, clients can select the woods and finishes for their projects. Right: Moor’s Tucano turned-wood birds for Woodyzoody provide a moment of whimsy amid the modern minimalism of much of the studio’s work.

Moor’s custom kitchens, which are available through 1stdibs, are arguably more works of art than rooms. The cooktops, and even the sinks, are often hidden in cabinets without hardware that are veneered in book-matched fossil elm, chestnut or walnut. Impeccable parquet flooring harks back to a time when craftsmanship was paramount, although the look of these spaces is unabashedly contemporary.

And the wood isn’t the only thing that’s exquisite. A Verde Alpi marble cutting-board slides to reveal a cooktop with an integrated hood. American walnut cabinets are complemented by countertops of concrete embedded with marble granules. 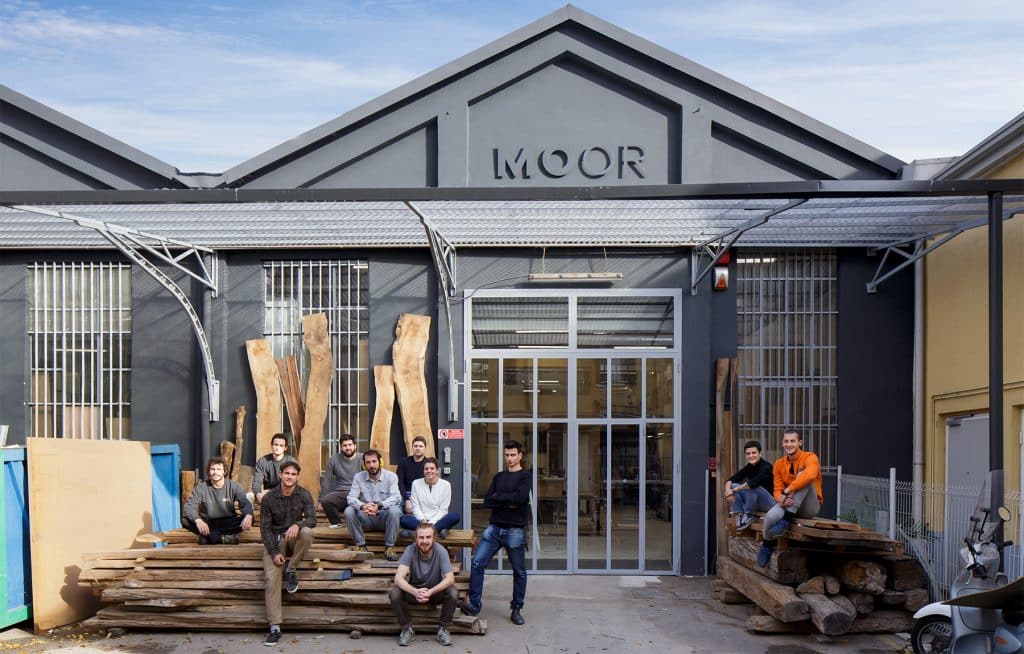 Immediately upon graduating from design school at the Politecnico di Milano, Moor began taking commissions, working with outside craftsman to realize his designs. “I knew I had to establish my own studio as soon as possible,” he recalls, “because I was driving the artisans crazy with my demands on every little detail.” He opened his workshop in 2011.

“I try to put to use some kind of new technique in every kitchen I design,” Moor says. “It demands a lot of time and energy, but it ultimately improves my practice.”

Even after more than a decade’s experience with the medium, Moor finds himself increasingly fascinated by wood and woodworking. A few years ago, he created an homage to his craft: Kit del Legnamé (meaning “timber kit”), a box made of Canaletto walnut and olive wood that holds six essential carpentry tools. The piece, which was exhibited at Milan’s Cologni Foundation for the Craft Professions and earned a design award from Wallpaper* magazine, exemplifies the double nature of his practice, which comprises both passion and conceptualization. “I love the warmth of wood,” he says. “And for me, it is a necessity to see whether or not an idea in my mind can be built.”