The Striking Poses of Audrey Hepburn and Frank Sinatra 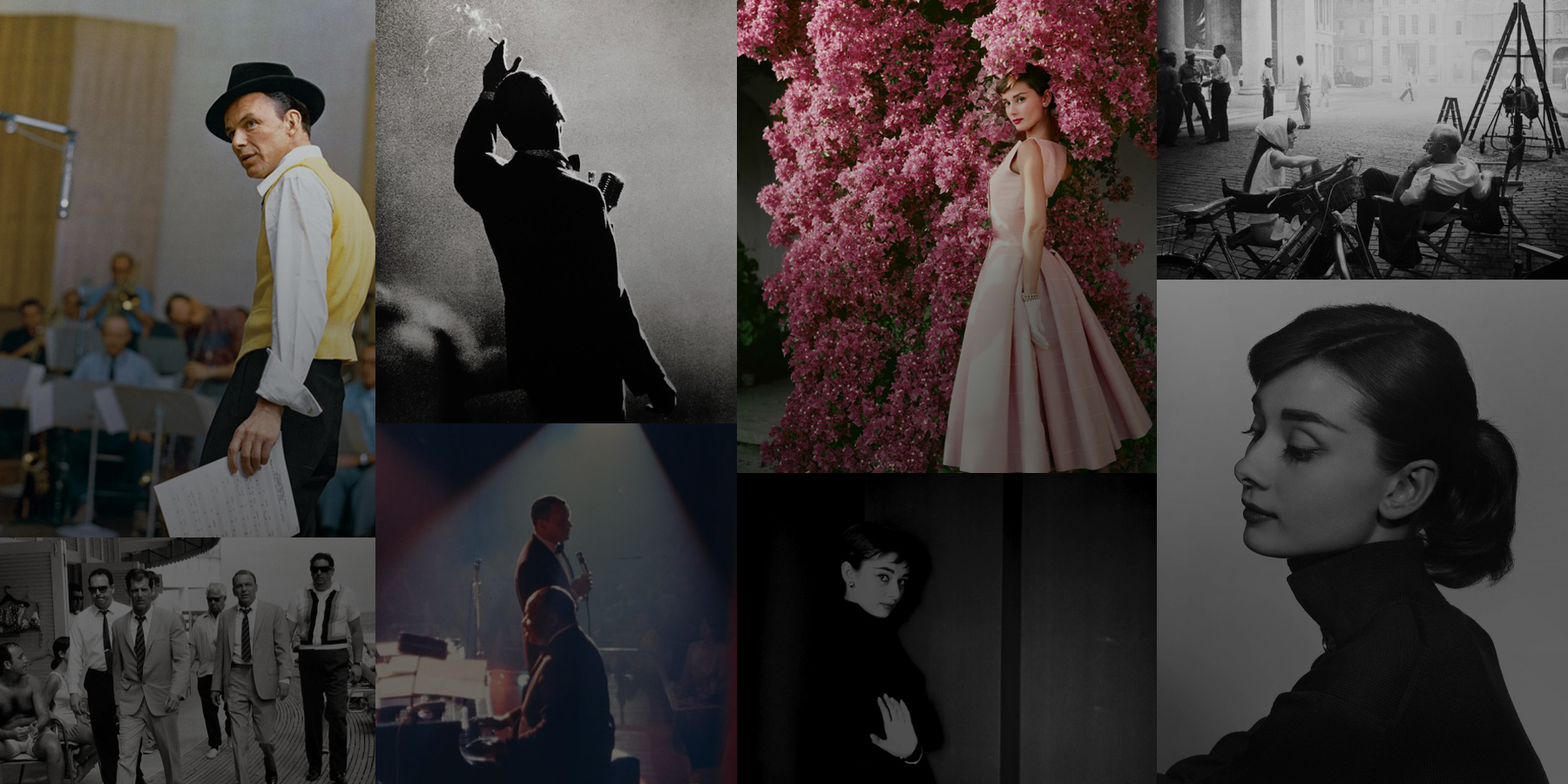 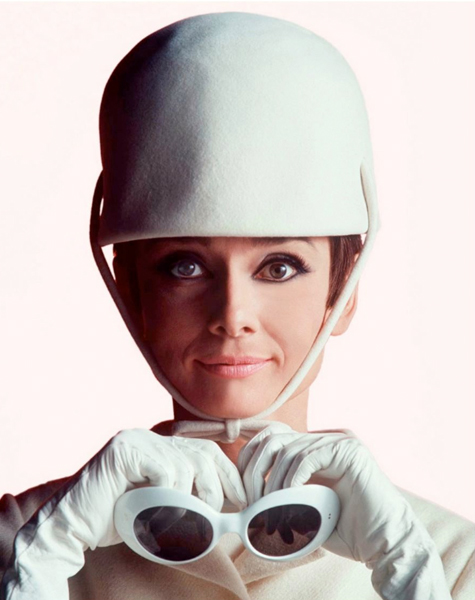 December 12, 2015Audrey Hepburn, Paris, 1965, by Douglas Kirkland, shows the actress dressed for her part in How to Steal a Million. Photo © Douglas Kirkland, courtesy of Peter Fetterman Gallery. Top: An assortment of images from among the seventy prints at the Peter Fetterman Gallery in a show that offers glimpses into the lives of iconic personalities Frank Sinatra and Audrey Hepburn.

Opposites attract, or so the saying goes. That very proposition is what the Peter Fetterman Gallery in Santa Monica is betting on with its latest exhibition, which runs through February 6, 2016. “Frank Sinatra and Audrey Hepburn: A Life in Pictures” displays 70 images, some of them never before seen, of two of Hollywood’s — indeed, the world’s — most charismatic stars.

Though I never met either one, they are and have long been part of my life. I’ve read endlessly about them, have written and assigned magazine articles about both and consider myself something of an authority (I know, join the club). I can also recite, to whomever cares to listen, a huge number of Sinatra songs by heart and quite a few lines from various Hepburn films. So to me, showcasing them in an exhibition is — despite or perhaps because of their differences — an idea whose time has finally come.

Frank Sinatra and Audrey Hepburn were both Oscar winners in the same year (1954) yet never appeared in a film together. Their backgrounds were worlds apart: He was from hard-knock Hoboken, New Jersey; she was born in Belgium to an aristocratic Dutch mother and an English (by way of Bohemia) father. Their styles, too, were vastly different: He was street-smart and roguish; she was delicate and ethereal. And yet they both possessed the one thing that can’t be bought, bottled or readily defined: staying power.

Celebrities come and go (mostly go), but the legacies of these two burn ever brightly and are seemingly inextinguishable. Why? Because they were unequaled in their talent and unique in their presence. 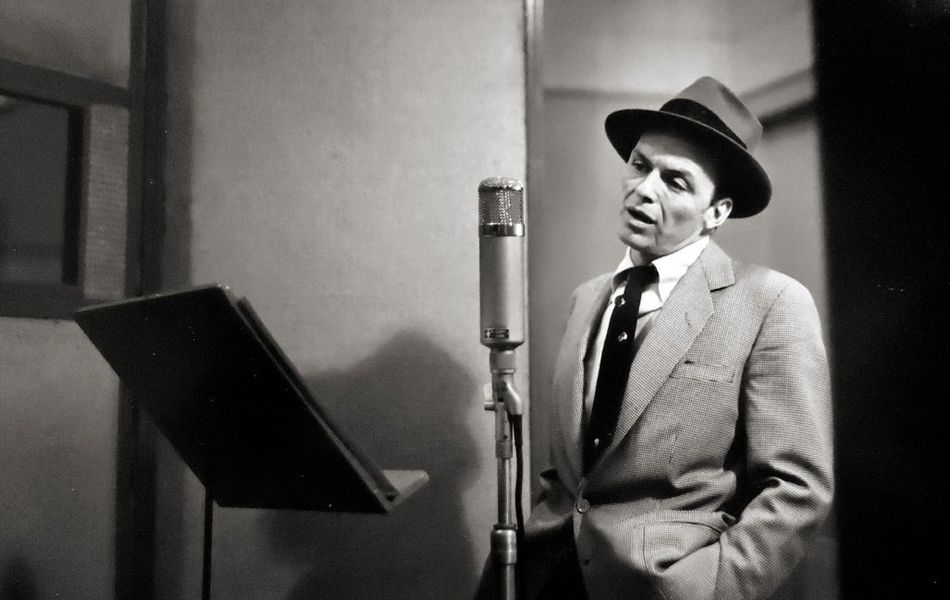 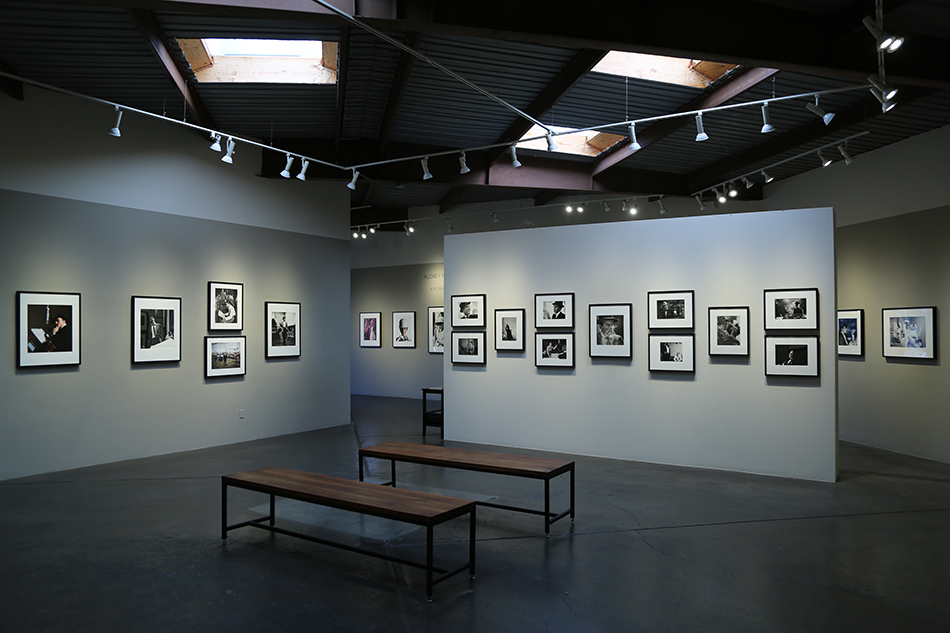 Images by photographers including Sid Avery, Yousuf Karsh and Leonard make up the collection. 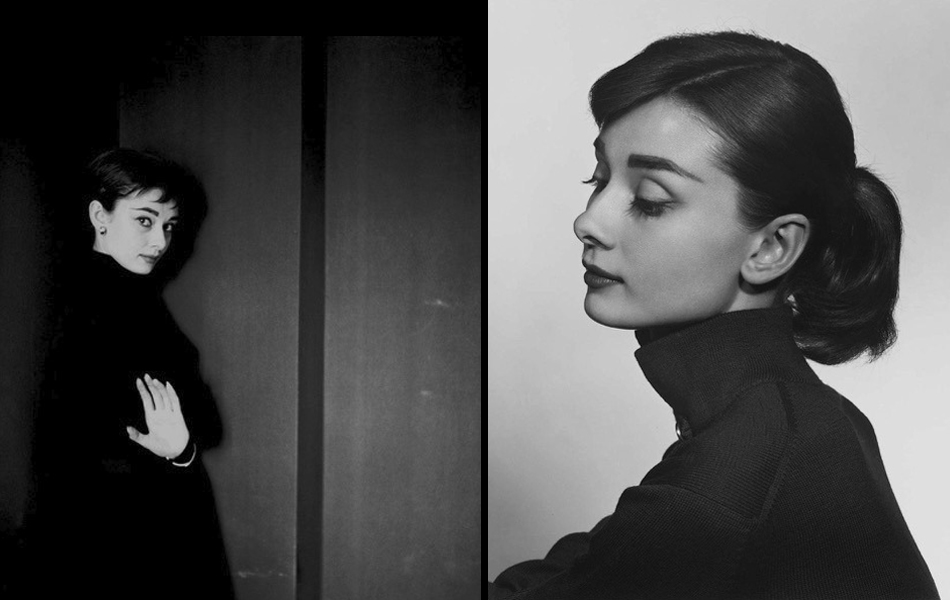 Portraits of the actress in her late 30s include a 1954 photo (left) by Cecil Beaton and a 1956 profile shot (right) by Karsh. Left: © Archive of Cecil Beaton/Courtesy Sotheby’s Archives. Right: © Yousuf Karsh Estate/Museum of Fine Arts Boston). 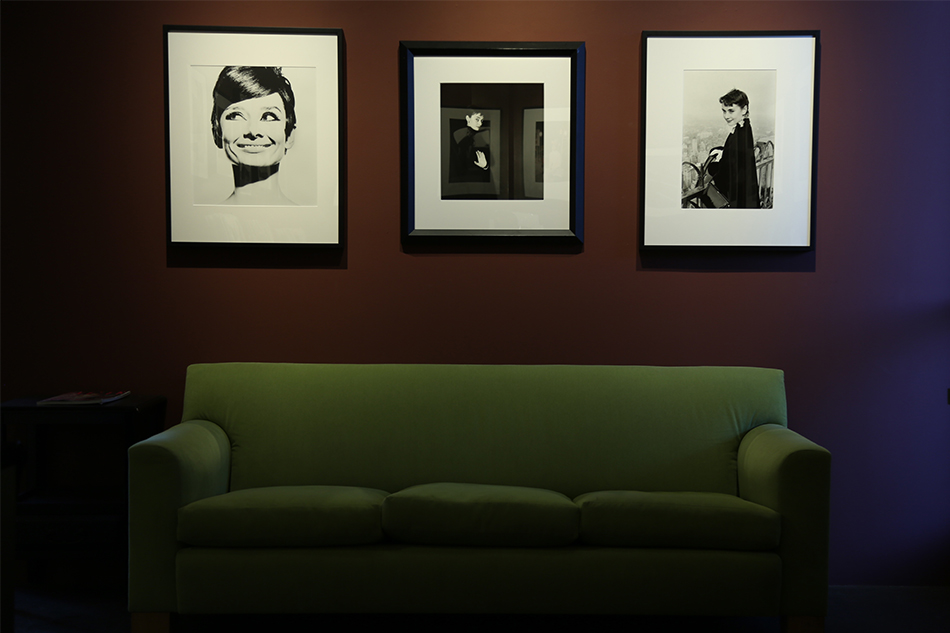 This room in the exhibition is hung with depictions of Hepburn throughout the years. Left to right: Audrey Hepburn, Paris, 1965, one of Kirkland’s How to Steal a Million promotional stills; a 1954 portrait by Beaton; Audrey Hepburn, Rockefeller Tower, New York, 1952, by George Douglas, who captured the actress when she was starring in the play Gigi on Broadway. Photo by Eric Minh Swenson, courtesy of Peter Fetterman Gallery 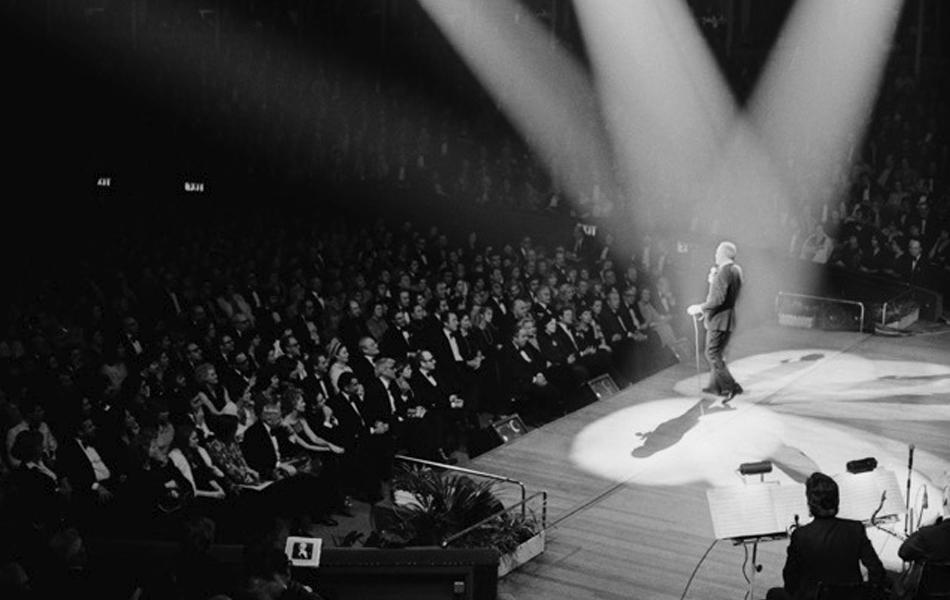 A 1975 photograph by Terry O’Neill shows Sinatra singing to his ex-wife Ava Gardner at the Royal Albert Hall in London. ©Terry O’Neill/Iconic Images 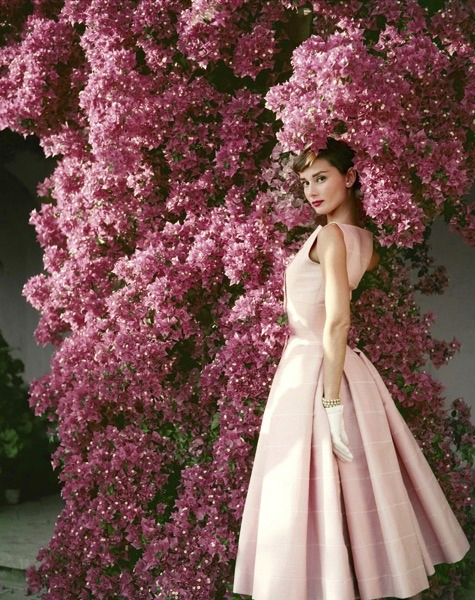 When I was newly appointed as editor in chief of Town & Country magazine in 1993, we published a special issue on glamour. The opening essay began like this: “When a glamorous person enters the room, the room itself changes.” That is exactly the almost palpable effect that Frank Sinatra and Audrey Hepburn had on people. This was especially the case in person. When he walked onto the stage, you would be seized by his magnetism. When she appeared, all eyes were on her.

Sinatra and Audrey (his last name, her first) had almost nothing in common. Sinatra always wanted to be a singer; Audrey, a dancer. His dream came true after years of waiting tables and singing for his supper, literally; then he experienced two serious setbacks: losing his voice in 1950, when he temporarily suffered from a hemorrhaged vocal chord, and losing the woman he loved, actress Ava Gardner, at a crucial point in his career. At five feet, seven inches, Audrey was told she was too tall to be the prima ballerina she yearned to be. Both Sinatra and Audrey became movie stars by default. His singing career led to roles in 1940s and ’50s Hollywood musicals and then in dramas. After ballet, she turned to music-hall theater and European B movies. She was discovered in Monte Carlo, in front of the Hôtel de Paris, by the French writer Colette, who brought Audrey to Broadway to star in Gigi, the play based on her novella. Audrey’s first starring movie role was as a runaway princess in 1953’s Roman Holiday, for which she won an Academy Award for best actress. 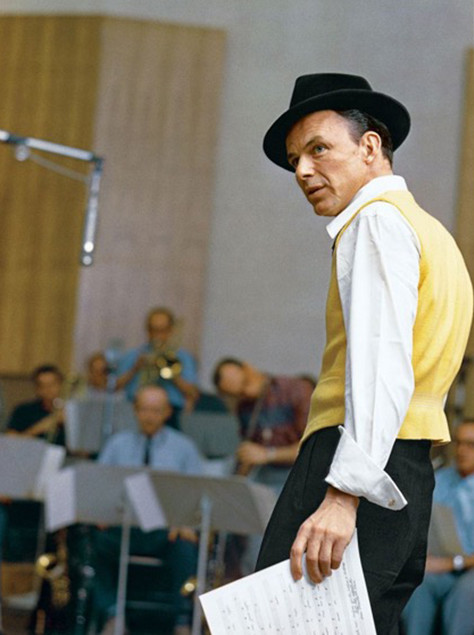 In the early 1950s, Sinatra recovered his voice, restarted his singing career and got the movie role he coveted, as Maggio in From Here to Eternity. His Oscar in 1954 was for best supporting actor. Sinatra changed record labels — from Columbia to Capitol — and began working with brilliant arrangers like Nelson Riddle and Billy May, with whom he created what are known as “concept” albums, developed around a theme (dance numbers, travel tunes, torch songs).

By the early ’60s, Sinatra was on a roll: He founded his own label, Reprise, and did a great deal of concertizing (mostly in Las Vegas). He retired, came back and retired again. When he died, at 83 in 1998, he was living in Palm Desert and married to his fourth wife. He would have been 100 years old today.

As for Audrey, in 1954, she met and married actor Mel Ferrer, and the two soon left Hollywood for Switzerland, although they continued to make movies. After two miscarriages, the couple had a son, Sean, in 1960, but theirs was a turbulent relationship that ended in divorce eight years later. Soon afterward, Audrey wed Andrea Dotti, an Italian psychiatrist, a relationship that led her to Rome and a second son, Luca. That marriage, too, ended in divorce. The final and perhaps most contented chapter of her life was divided between living permanently in Switzerland with her companion, Robert Wolders, and acting as a goodwill ambassador for UNICEF. She died of cancer in 1993 at the age of 64. 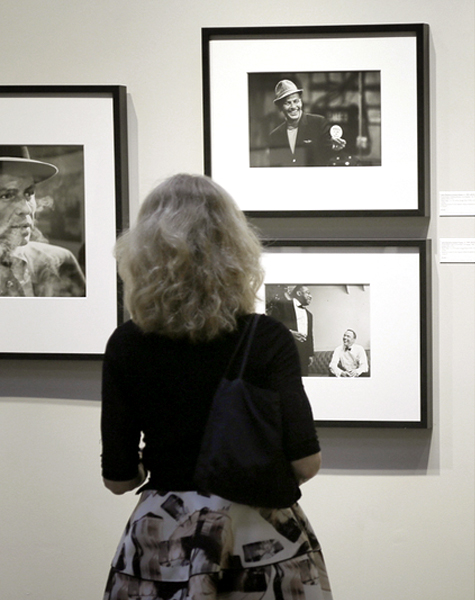 Sinatra and Heburn still dazzle viewers after all these years. Photo by Eric Minh Swenson, courtesy of Peter Fetterman Gallery

Wolders says that Audrey knew Sinatra quite well. “He adored her and called her ‘princess’ in a very loving way. Audrey, on the other hand, was always a little scared of Frank because he had this reputation of being rather dangerous.”

Gallery owner Peter Fetterman says he put together the exhibition because “I’ve been a lifelong devotee of both Sinatra and Audrey. I had the great pleasure of meeting Sinatra in my former life as a producer. I produced a feature film with Luciano Pavarotti for MGM called Yes, Giorgio. Pavarotti worshiped Sinatra, and Sinatra worshiped Pavarotti.” Out of the blue, Sinatra called Fetterman and offered to give the opening night party for the movie when it previewed in New York. “It was one of the great nights of my life, which you can imagine for a poor kid growing up in a tenement in London who idolized Sinatra.

“I never had the honor of meeting Audrey,” Fetterman continues, “but as I was preparing the Sinatra exhibition earlier this year, I ended up loaning the great image of her on the set of Sabrina by Dennis Stock to the ‘Audrey Hepburn: Portraits of an Icon’ exhibition currently at the National Portrait Gallery in London. A little light bulb went off in my head. Wouldn’t it be great to have two of the greatest icons in an exhibition for the first time? And, voila, here we are. I’m thrilled to have rolled out our little red carpet.”

Shop “A Life in Pictures” at Peter Fetterman Gallery on 1stdibs