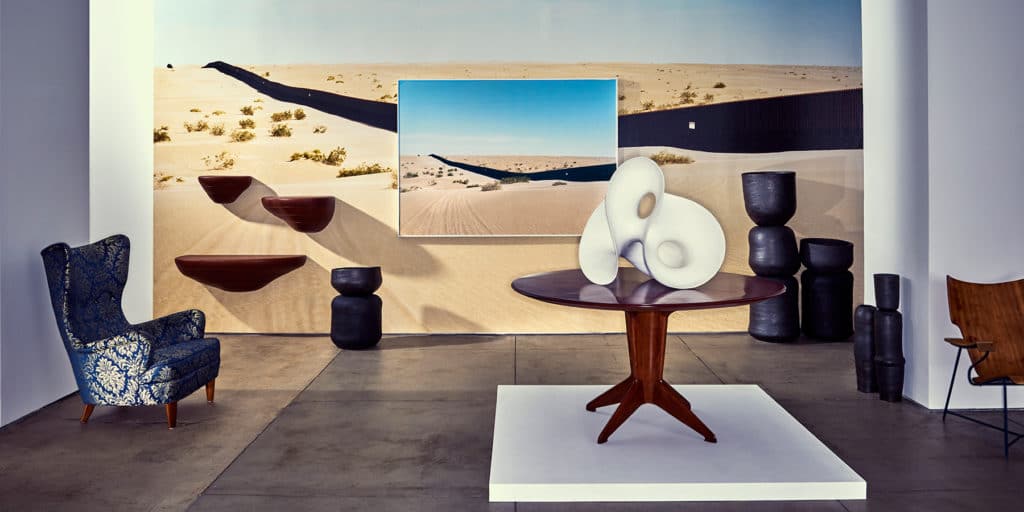 The first exhibition at the new showroom pairs photography by Victoria Sambunaris with furniture and art curated by creative director Michael Reynolds. 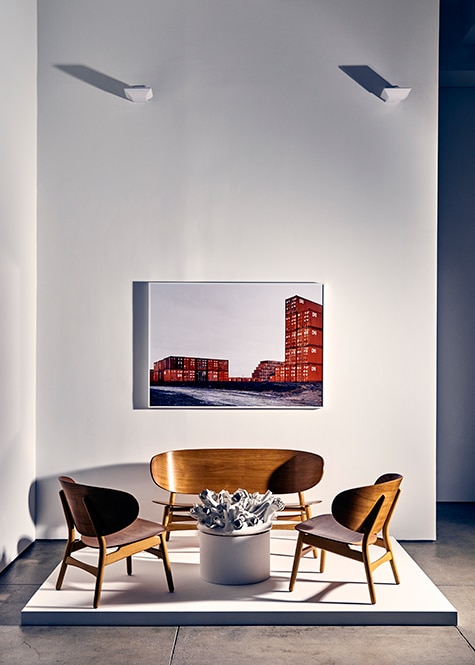 Juliet Burrows and Kim Hostler, the duo behind the highly regarded New York gallery Hostler Burrows, have always been ahead of the curve. In their first gallery, Antik, an expansive space they opened in 1998 in then-nascent Tribeca, they specialized in top-tier Scandinavian design from the 19th and 20th centuries. There, they watched obscure names become design stars and nurtured emerging talents until they reached highly collectible status. For the past five years, having adopted the name Hostler Burrows, they’ve occupied an intimate salon-like space on East 10th Street where their innovative curatorial vision has extended to both established and lesser-known names.

Now, a fresh chapter has begun with the opening of a gleaming new gallery, located just a few doors down from their existing showroom (which will remain open). “Finding this incredible space, which formerly belonged to a Biedermeier dealer, represents an entirely new scale for us,” Burrows enthuses as she offers a tour of the vast 2,800-square-foot gallery, which seems to belong in far West Chelsea rather than neighborly 10th Street.

For Hostler and Burrows, the new gallery offers an opportunity to evolve their successful program — still known mostly for Nordic design and ceramics — while incorporating contemporary design and fine art. “Since we started the business, we’ve always been interested in the marriage of art and design,” says Hostler. “After our nineteen ninety-nine Axel Salto exhibition, we did a post 9/11 show with Catherine Opie’s work accompanied by Danish cabinetmaker furniture. We’ve always dreamed about doing more of that in the future.” 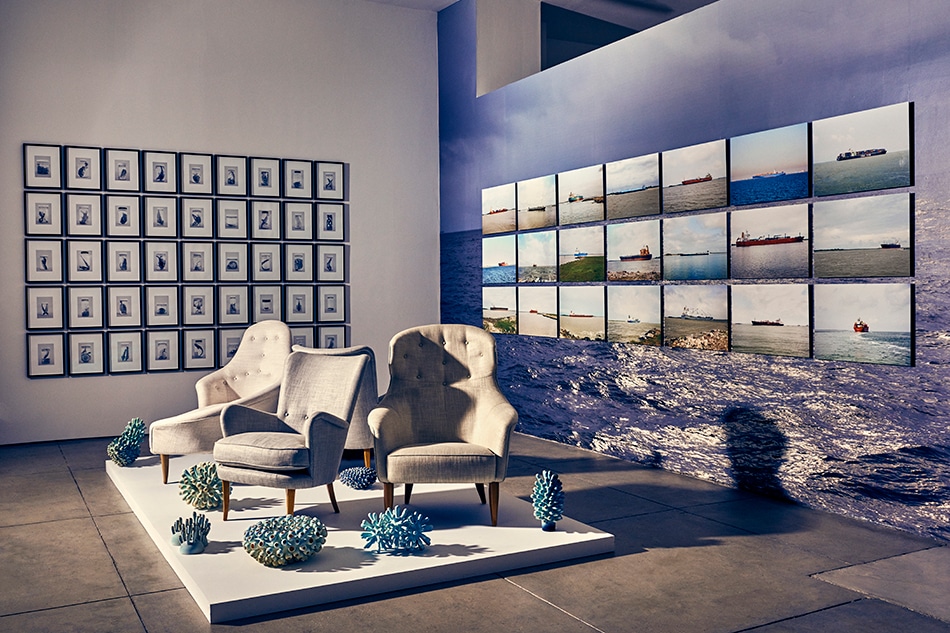 Here, lounge furniture by Kerstin Hörlin-Holmquist and Carl Malmsten is surrounded by Eva Zethraeus’s porcelain sculptures. Photos in this slideshow by Francois Dischinger 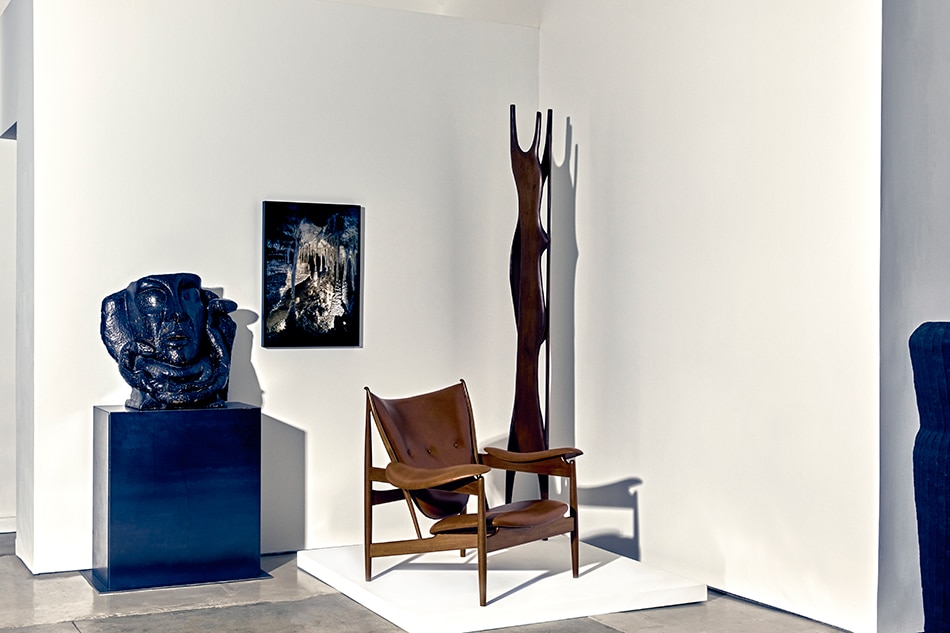 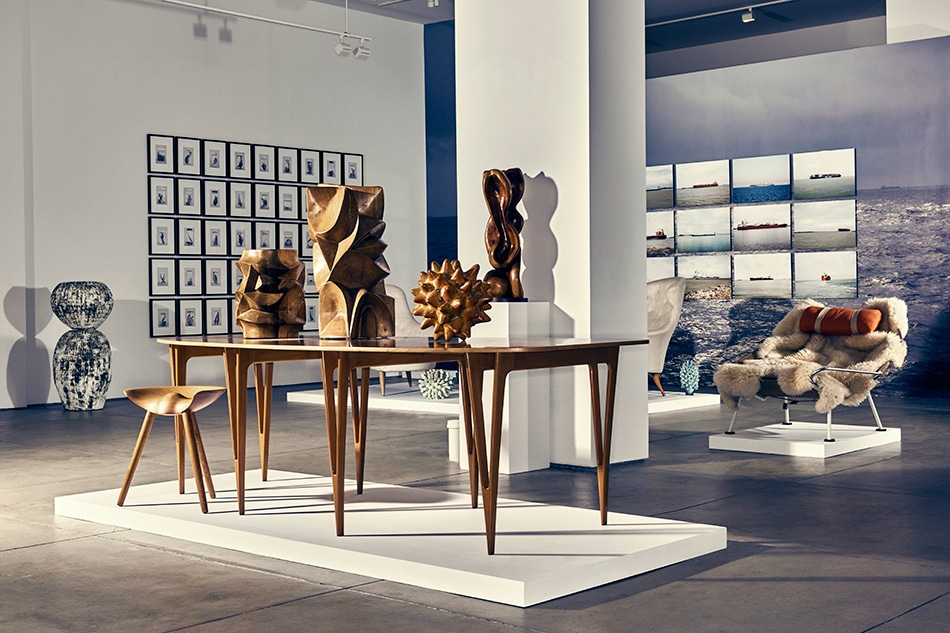 A wooden table by Børge Mogensen is topped with a ceramic sculpture by Kristina Riska and wooden sculptures by Ralph Dorazio. The orange star sculpture is by Hans Hedberg and the stool is by Mogens Lassen. 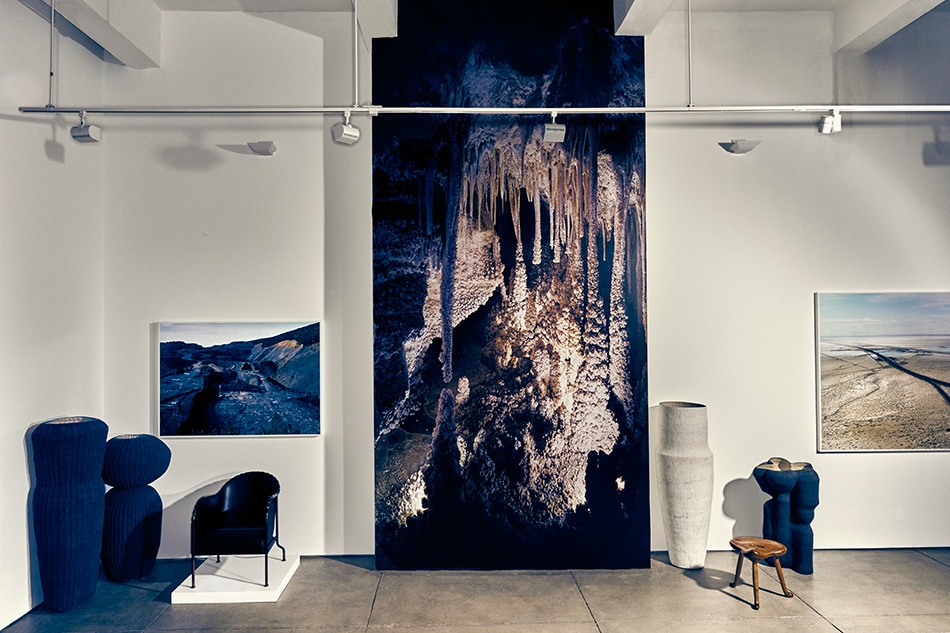 A ceramic sculpture by Kristina Riska and a chair by Mats Theselius stand to the left of a custom wall mural by Flavor Paper. On the right is a three-legged stool by Josef Frank. 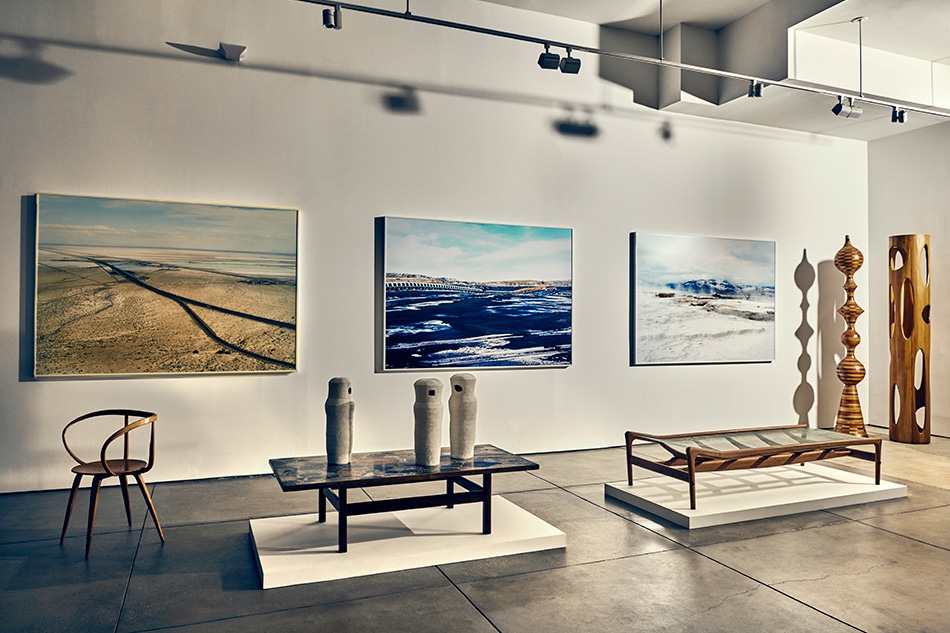 From left: A pretzel chair by George Nelson, three ceramic figures by Sonja Duò-Meyer atop a coffee table by Erling Viksjø, a rosewood daybed by Helge Vestergaard-Jensen and totem wooden sculptures by Ralph Dorazio. 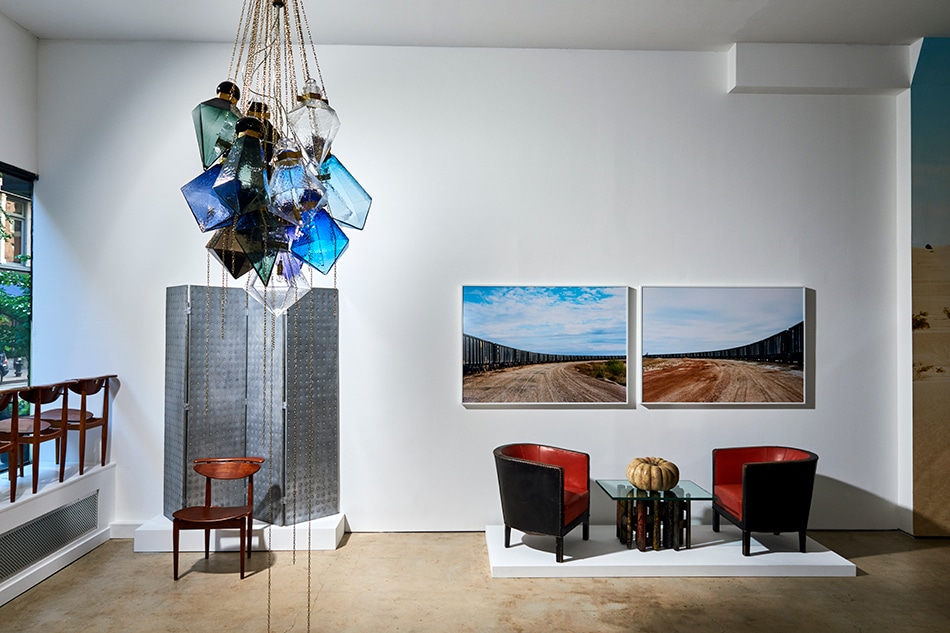 Frida Fjellman‘s Lustre Gothique Aux Saphirs chandelier hangs over this space, which includes, from left, a set of Finn Juhl dining chairs, a folding screen by Mats Theselius. A pair of chairs by Nordiska Kompaniet sit opposite a pipe table by Paul Evans topped with a pumpkin sculpture by Hans Hedberg. Untitled ‘Rail Yard’ and Untitled ‘Rail Car Unloading’, a 2012 diptych by Victoria Sambunaris, adorns the wall above. 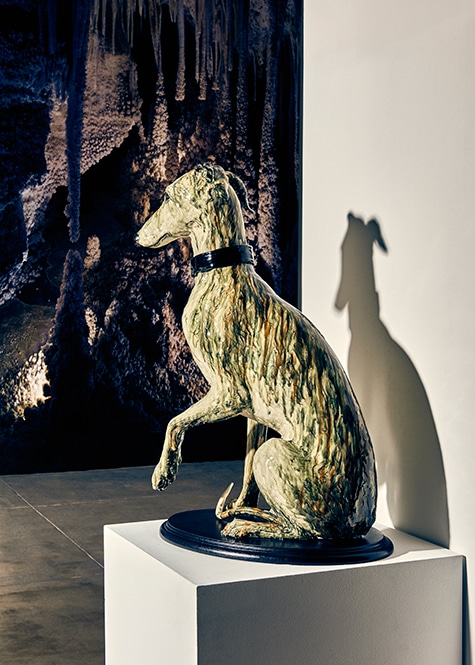 A ceramic sculpture by Frida Fjellman stands in front of a mural by Flavor Paper. Photo by Francois Dischinger

For the gallery’s inaugural show, the duo tapped longtime friends fine-art photographer Victoria Sambunaris and creative director Michael Reynolds to create “Observed: The Great American Landscape in Transition.” The exhibition pairs more than a dozen of the photographer’s large-scale works with lighting, ceramics and furniture from Hostler Burrows’s collection. “We’ve known Vicky for twenty years and have collected her work from the start,” says Hostler. “Michael’s eye was the missing link to bring everything together.”

The gallery’s expansive white-walled space is the perfect backdrop for Sambunaris’s thought-provoking images. Taken on her annual photographic pilgrimages across America, the chromogenic prints convey the sublime beauty of the landscape while documenting its transformations, including sprawling housing developments, rows of trucks and trains and colossal mining operations. One standout picture depicts a winding U.S.-Mexico border wall. Nearby, a gridded series of images captures scores of industrial shipping vessels.

Set among these powerful images — which include three floor-to-ceiling murals of Sambunaris’s work created by Brooklyn-based Flavor Paper — are furniture vignettes curated by Reynolds, whose career has moved effortlessly between art, design and publishing. “It was important for the furniture and objects to play well against the art and not have one dominate,” he says in explaining his selections, which include ceramics from Salto and Kristina Riska and rare vintage furniture from Finn Juhl and Børge Mogensen. “Nevertheless, I’ve still played with contrast, and some elements of the exhibition feel darker and more complex to reflect the images.” 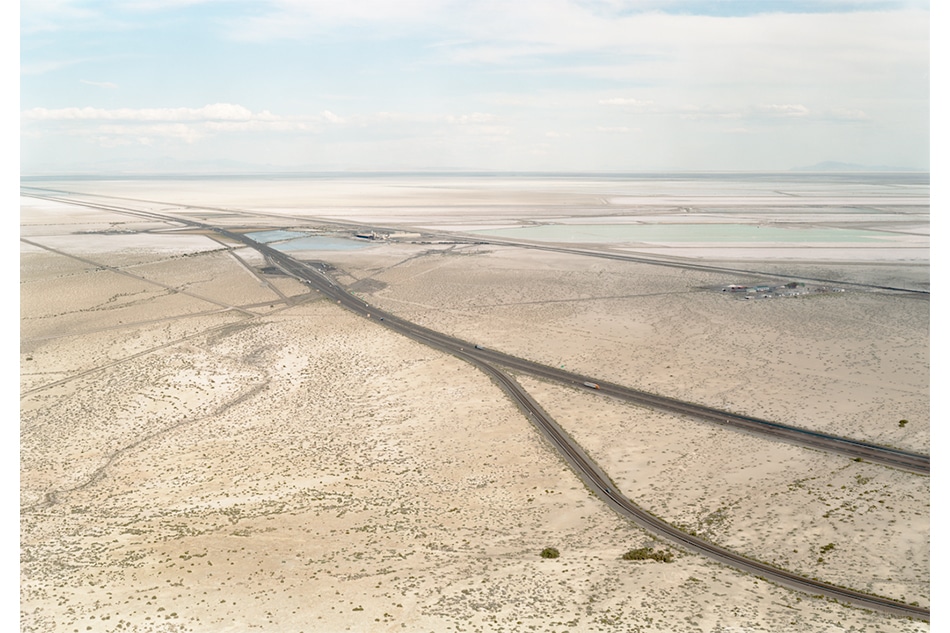 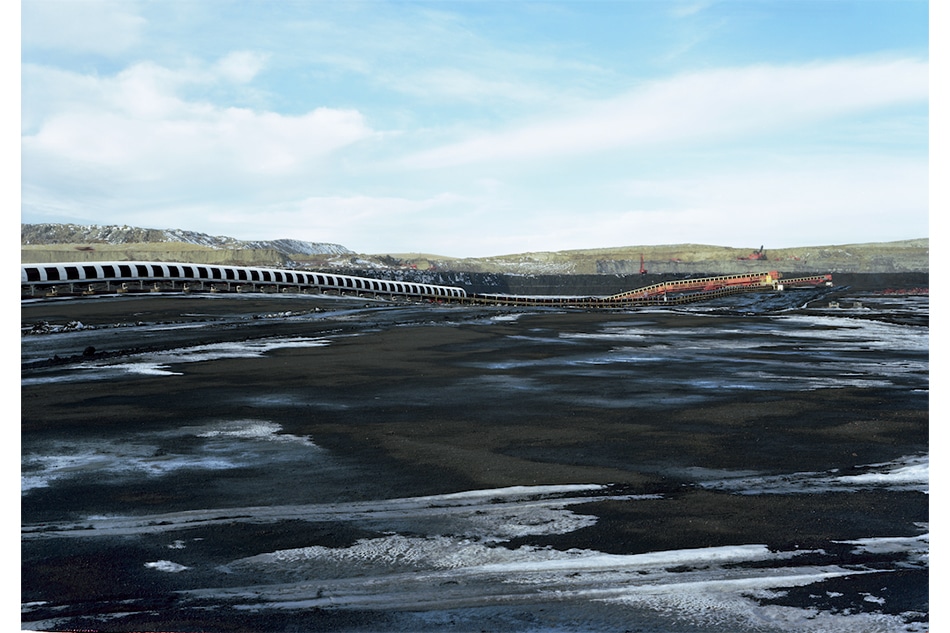 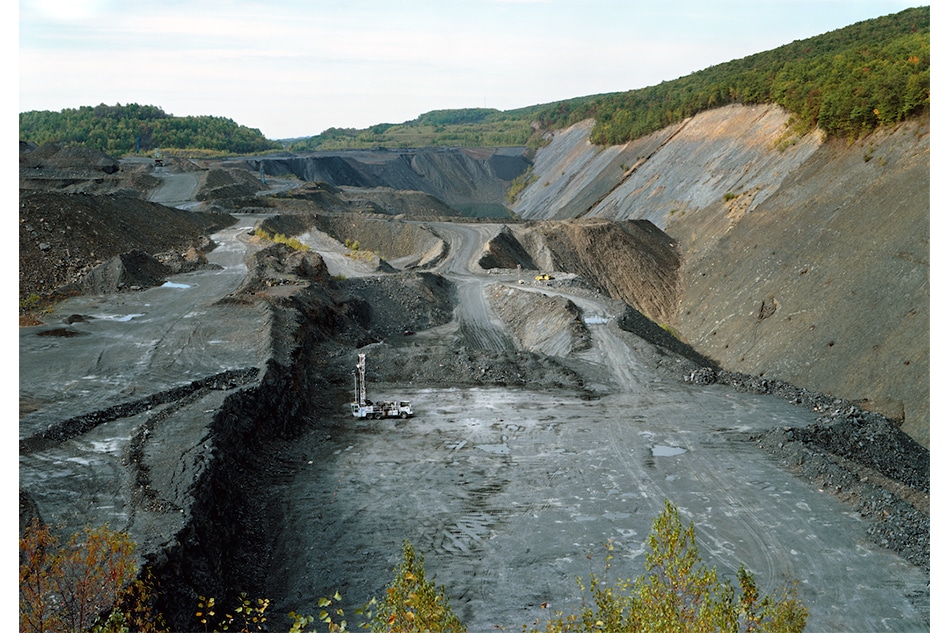 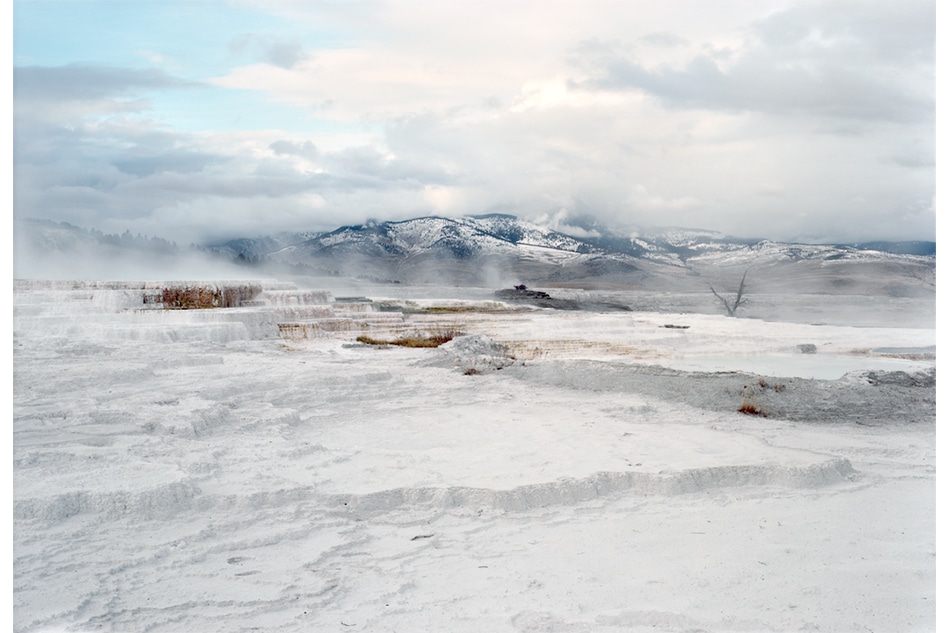 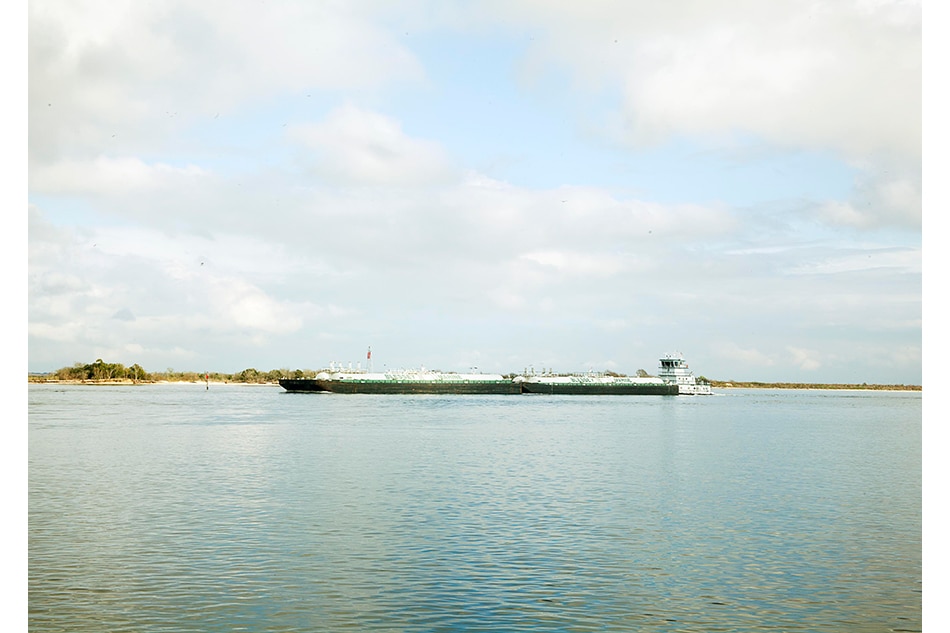 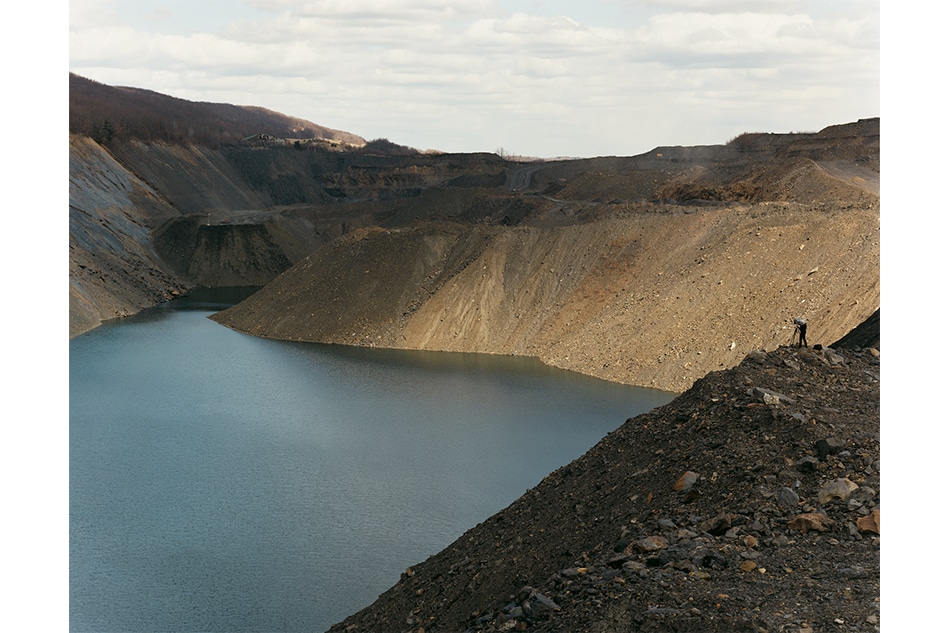 Portrait of the artist, Victoria Sambunaris, 2008. Photo by Jason Schmidt 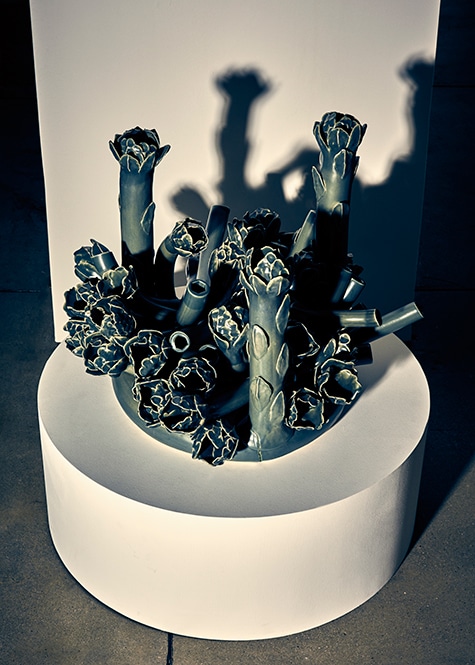 This porcelain sculpture is by Anat Shiftan. Photo by Francois Dischinger

According to Sambunaris, the collaboration exemplifies the increasingly successful merging of art and design. “Michael and I have worked together for many years,” she says. “Our first collaboration was for House & Garden, when we were sent to the wilds of the New Mexico desert. From then on, our work together has included a 2011 exhibition at the Albright-Knox Art Gallery [in Buffalo], where Michael created a space incorporating ephemera, cave works, geologic specimens, maps and an installation of sixteen hundred of my snapshots.”

Sambunaris’s primary dealer Yancey Richardson, who is staging a concurrent exhibition, titled “Nexus,” at her namesake Chelsea gallery that features the artist’s new work exploring the effects of the petrochemical and industrial cargo trade, sees these photos as a logical counterpoint to design. “I think the design world has always had an interest in Victoria’s work because of her carefully considered compositions, nuanced color palette and ability to visually organize natural landscape forms and man-made infrastructure into strong formal compositions,” says Richardson. “It is a very unique approach. She is essentially a minimalist, and the work, while carefully considered, thoroughly researched and deeply thoughtful, is subtle, almost objective and not in any way bombastic.”

Sambunaris’s exhibition will remain on view at Hostler Burrows until the end of June. The gallery has several additional shows in the works, including one of ceramics paired with vintage photography. “We love this new space and definitely want to use it in different ways,” says Burrows. “We’ve been really successful with the contemporary artists we’ve been working with, and we wanted to provide more of a platform for that material.”

Burrows, a former dancer, even imagines showcasing performance, video and dance — the kinds of “happenings” that once brought together multiple disciplines in brand-new ways. “The sky is the limit,” says Hostler, who believes the boundary between fine art and design is crumbling, particularly in the eyes of younger collectors. “We’re moving away from the snobbery of the art world, and I think disciplines are converging again. For me, that’s the most exciting thing, because that’s what I found so stimulating and exciting as a younger dealer.”