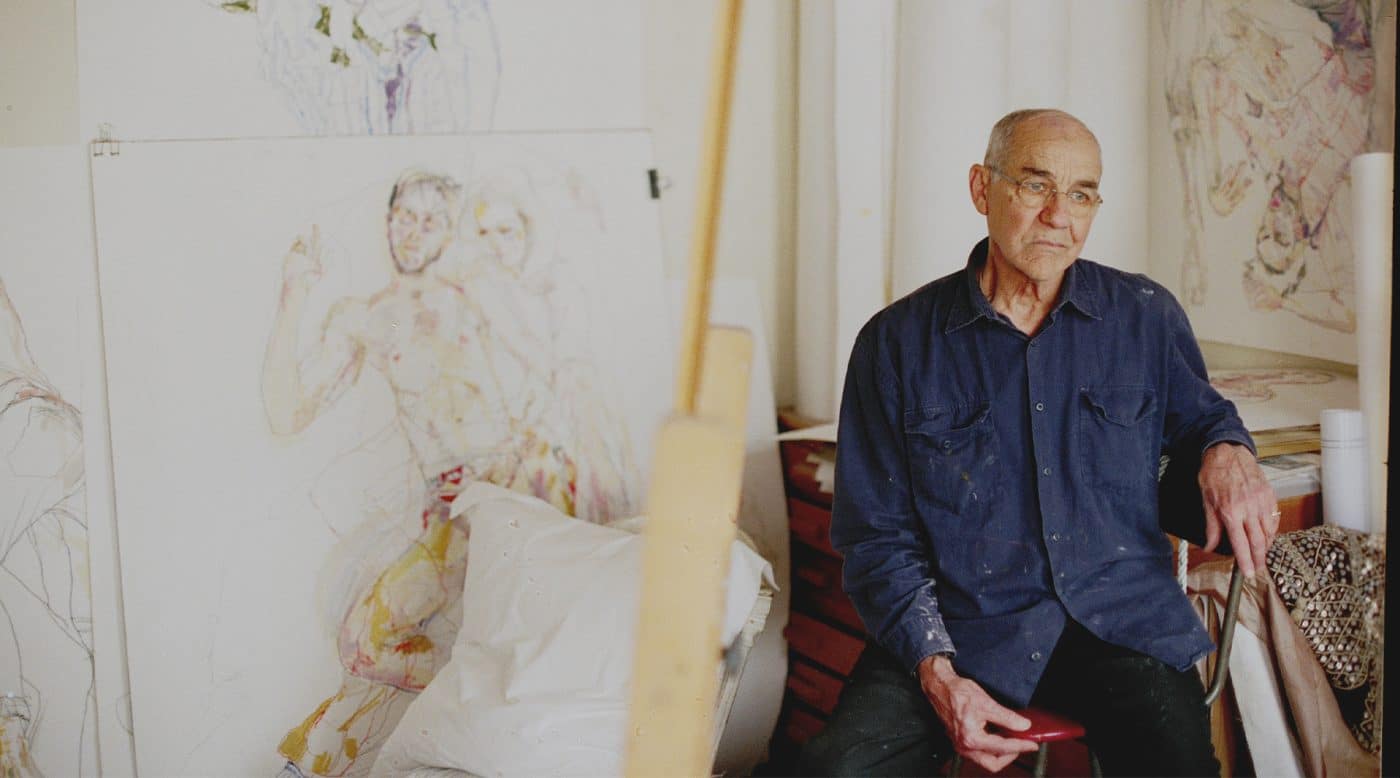 For years, Howard Tangye schooled young creators at Central Saint Martins college. Now his own art is being lauded.

November 13, 2022There’s a lot to take in when you enter Howard Tangye’s studio, located on the first floor of his North London home. Initially, you’re hit by the pervasive smells of piney turpentine and fresh paint drying in the air. Then, you’re struck by the profusion of brushes, oil sticks and tubes of paint strewn over the tabletops. Notes on torn pieces of paper, sketches, postcards, newspaper clippings and photographs are haphazardly pinned or taped to a back wall, while the middle of the room is dominated by a delightful disarray of found objects spread out on top of a large chest of drawers.

Among this cherished clutter of old pots, glass vases, vintage boxes and dried flowers is a collection of antique dolls with faded faces and missing limbs. “I’ve lined them up like they’re on an operating table, haven’t I?” says the artist, laughing. “I’ll get round to repairing them at some point.”

Tangye, 74, is always on the go. He says he gets “jittery and frustrated” if he isn’t at his easel. If he’s ever out of sorts or stressed, painting has a restorative effect on him, which means the dolls may have to wait. “Once I get working, everything goes away — I feel really good,” he insists.

The restless creator is well-known in the world of fashion. He taught at venerable London art school Central Saint Martins for 35 years, first as a drawing lecturer then as head of womens wear, a position he held for 16 years. Tangye himself studied fashion, textiles and drawing at St. Martins in the mid-1970s and later completed postgraduate studies at Parsons School of Design, in New York. During his tenure on the faculty of the London college, he tutored future industry luminaries John Galliano, Hussein Chalayan, Stella McCartney, Zac Posen, Christopher Kane, Richard Nicoll and Sarah Burton, among others. In fact, some of those charming sketches pinned to the back wall of his studio are gifts from former pupils. “Even their children make these lovely pictures for me. Some have been there for a while,” he says smiling.

On this visit, the euphonic tones of Dutch harpist Lavinia Meijer emanate from an iMac on a paint-splattered desk equally jam-packed with beautiful broken things, as well as an orderly row of CDs showcasing Tangye’s love of soulful chansons, melodic jazz and classical music.

“I like sounds that don’t interfere with my concentration,” says the artist, whose large-scale figurative drawings and paintings are strikingly poetic and evocative, often compared to the work of early-20th-century Austrian painter Egon Schiele. His style, a combination of bold strokes of color and empty spaces, builds a romantic narrative that is as much about concealment as revelation, lending his figures an enigmatic quality at once urgent and ethereal.

In one corner of the studio is a large pile of used paper palettes, each one a colorful record of a finished composition, scribbled with the name of a corresponding subject. Tangye explains that they are precious mementos with their own living presence.

Some, smeared with splodges of delicate lilac, dusty pink and magenta, look like floral abstractions; others, more earthy and organic in spirit, are covered in thickly textured swirls of burnt umber, rusty red and warm ocher. “I have thousands of palettes,” he says. “I keep them because I think they are so interesting. I often study the colors through a magnifying glass, as I do with my finished pieces. Certain areas become very abstract when you observe them in this way. I really love that.”

Tangye occasionally paints people together, so his palettes are sometimes named after two or even three sitters. In these compositions, the subjects’ bodies are frequently caught in an elegant tangle, with superimposed limbs creating a moment of choreographic suspense.

His solo sitters, by contrast, are languid and introspective, often painted without a background, allowing the viewer to engage with the artwork in a more speculative way. For example, his picture Oscar (Sitting — Head on Chair), 2013–18, seems to capture a moment of melancholy, and yet Oscar, dressed in an exuberant shirt and theatrically draped over what looks like a pillow, may also be recuperating after a raucous night out on the town. Similarly, the demure model in Elodie (Sitting, Looking Down), 2007–08, appears heavyhearted, but she may be quietly meditating, possibly entranced by the sound of Dvořák playing from the studio’s computer.

A gentlemanly and soft-spoken character, Tangye is profoundly passionate about his art but has long shied away from self-promotion, which explains why his extensive oeuvre remained under the radar for so long. His paintings have now achieved the international recognition they deserve thanks to the dedicated work of his studio manager, Rupert Martin, who has spent the past few years archiving and cataloging the extensive portfolio, which, in Tangye’s own home alone, comprises thousands of compositions.

Martin’s labor has certainly paid off. Major London institutions have made acquisitions, including the V&A museum, which holds 56 works, and the National Portrait Gallery, which recently added a fourth to its collection. Martin has also begun a more earnest effort to market Tangye’s work. The two established Howard Tangye Studio in 2019 and began selling on 1stDibs in 2021.

Furthermore, as evidenced by the gifts of kindergarten art pinned to Tangye’s wall, he’s greatly admired by many innovative designers, who have much to thank him for.

Wes Gordon, an American designer and the creative director of Carolina Herrera, is a former pupil and has also sat for the artist. “An entire generation of designers has been molded, either directly or indirectly, by Howard,” says Gordon. “And the fashion industry is a more beautiful place as a result.”

Galliano, now creative director for Martin Margiela, agrees. According to him, Tangye has a “laser-sharp eye, dancing and exotic, piercing through his subjects.” And he was a gifted instructor. “I was always in awe. I would always listen. I would trust his every critique,” Galliano recalls, adding, “Discipline and his constant encouragement still ring clear.”

As a sitter, Gordon was afforded a close-up view of Tangye’s process. “I was particularly fortunate to be able to spend time with Howard one-on-one as a model,” he recounts. “I spent many an afternoon reclining on the sofa in his studio, half awake, while Carla Bruni’s ‘Quelqu’un m’a dit’ played on a loop, Howard standing at his easel in the corner, drawing his beautiful lines. I’m not sure how or why I was lucky enough to have been asked by Howard to model — there were definitely students more interesting or more beautiful — but it was an experience I will always remember fondly and with gratitude. In fact, one of his portraits of me hangs in my office now, a daily reminder of London, Howard and Saint Martins.”

Gordon is right to feel fortunate. Tangye is extremely discerning when it comes to selecting his subjects, a process that has everything to do with a person’s physical presence — their movements, their expressions and their ability to convey emotion without artifice.

“I have to be comfortable with the sitter, their energy and their state of being,” he explains. “In fact, I have to see them a few times to get to know them first, so I can observe how they move, unaware that I’m watching them.

Given the thoughtfulness that goes into his work, how does Tangye know when his brushstrokes resonate with a certain mood or have unlocked a certain memory? “It’s difficult to describe. I just get a strong sensation, something that tells me, ‘Yes, that is it,’ ” he says, pausing for thought. “Quite often when the model has seen the finished work, they will say, ‘You have drawn what I was thinking,’ and that, to me, is a very good result.” 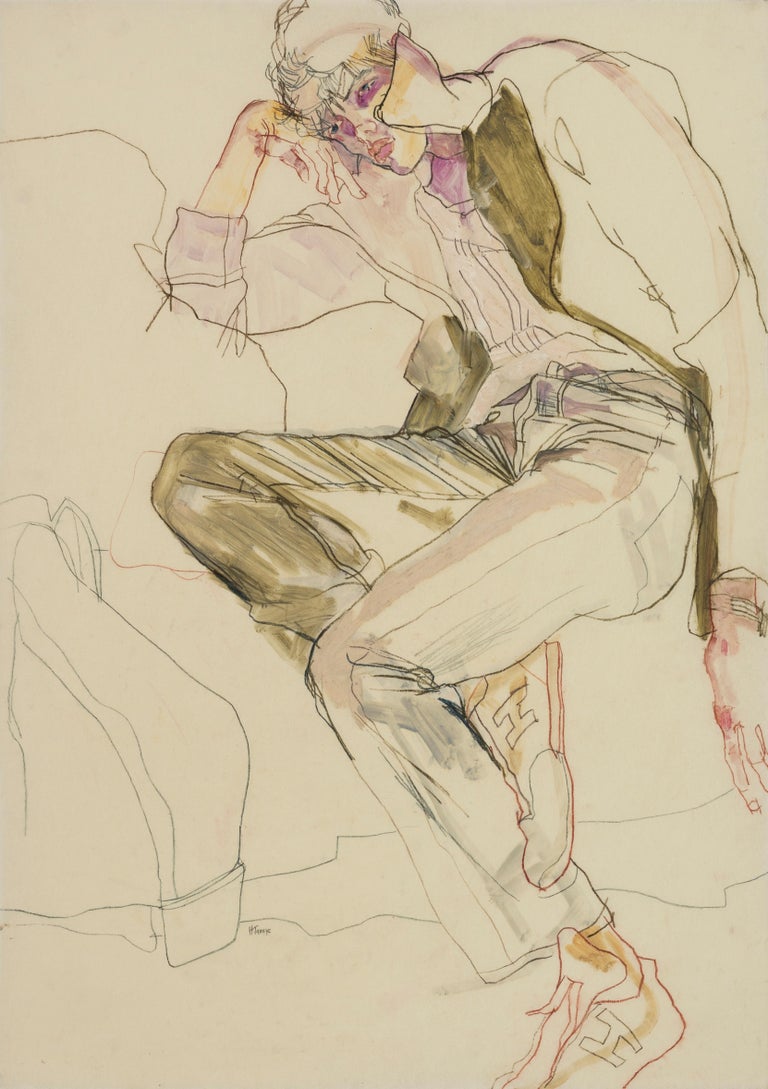 “Wes Gordon is an American fashion designer who met Howard during his studies in London and began to sit for portraits during this time. After graduating, in 2009, he worked at Oscar de la Renta and, later, Tom Ford. That same year, he launched his own line of womens wear and, in 2018, took over from Carolina Herrera as creative director of her eponymous fashion label. In Wes’s office in New York, a portrait by Howard sits proudly over his desk.” 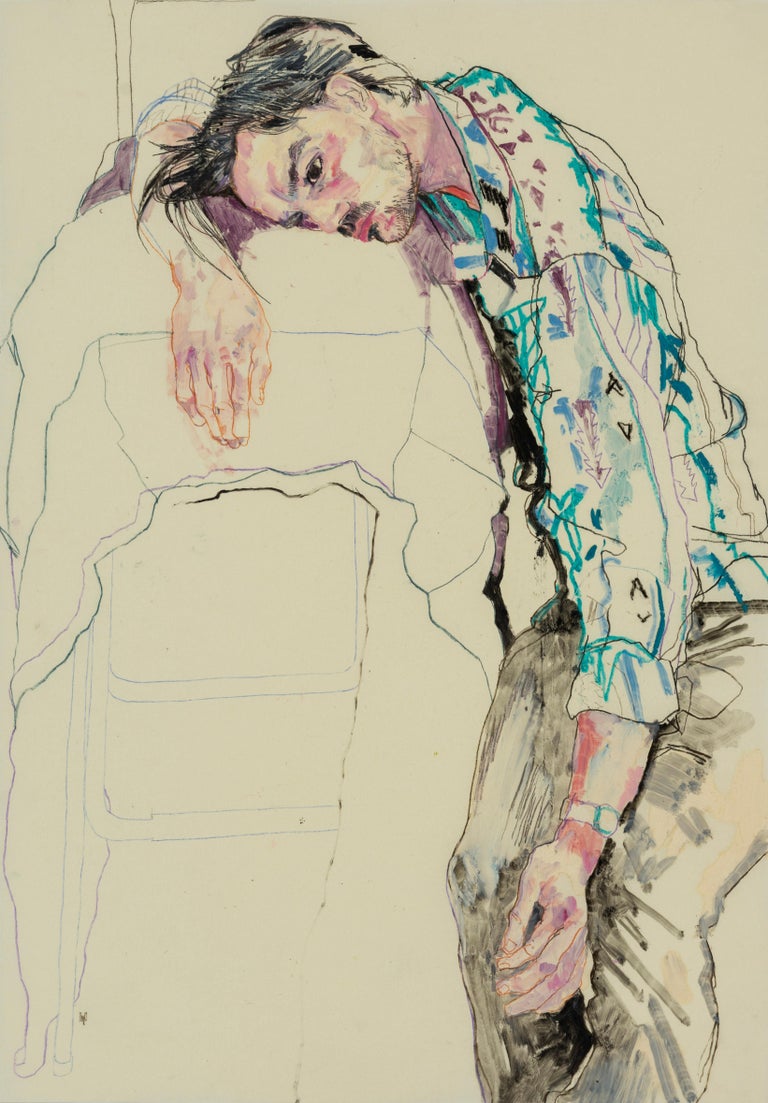 “Oscar L. is an ex-student, friend and frequent sitter of Howard’s who now works as a product designer, artist and entrepreneur. Oscar studied under Howard at Central Saint Martins before continuing at the Royal College of Art. He now runs his own studio, based between Paris and London. A few portraits of Oscar are promised gifts to the Art Gallery of New South Wales, in Sydney, Australia.” 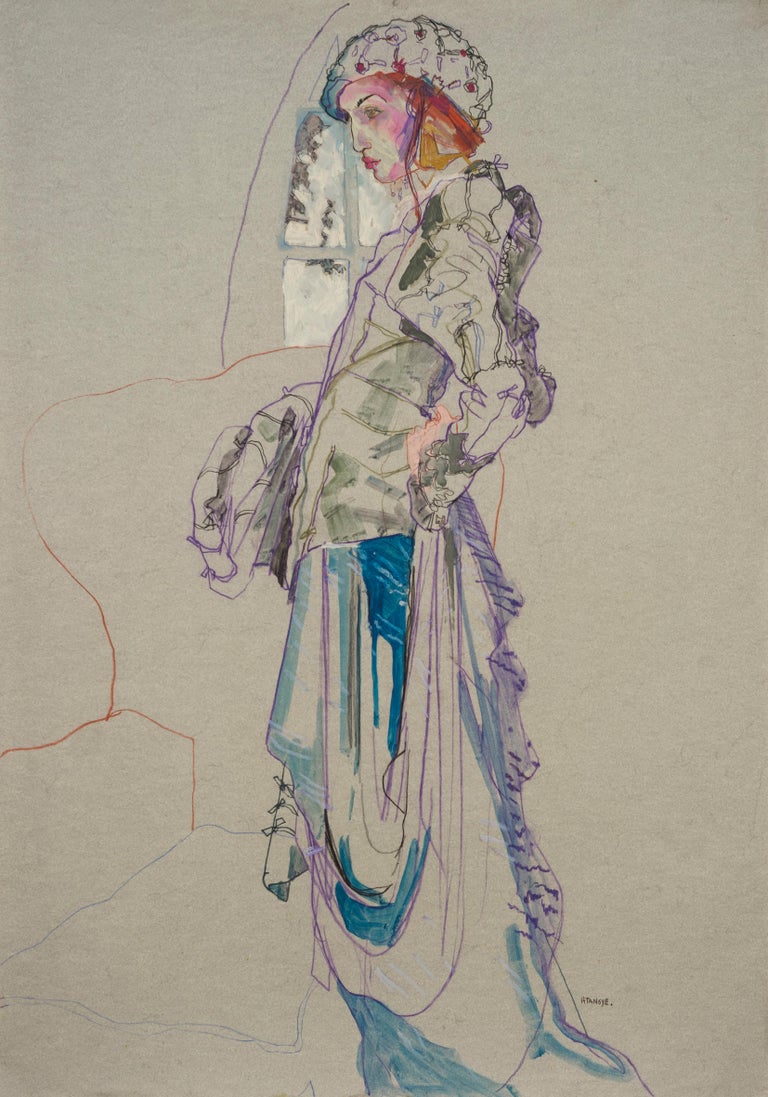 “This portrait features Elodie wearing John Galliano couture. Howard traveled to Paris with Elodie at the invitation of the designer, who is a friend and ex-student. Galliano was incredibly generous in allowing access to both his studio and the atelier of Christian Dior. He owns a number of the works made during these sessions.” 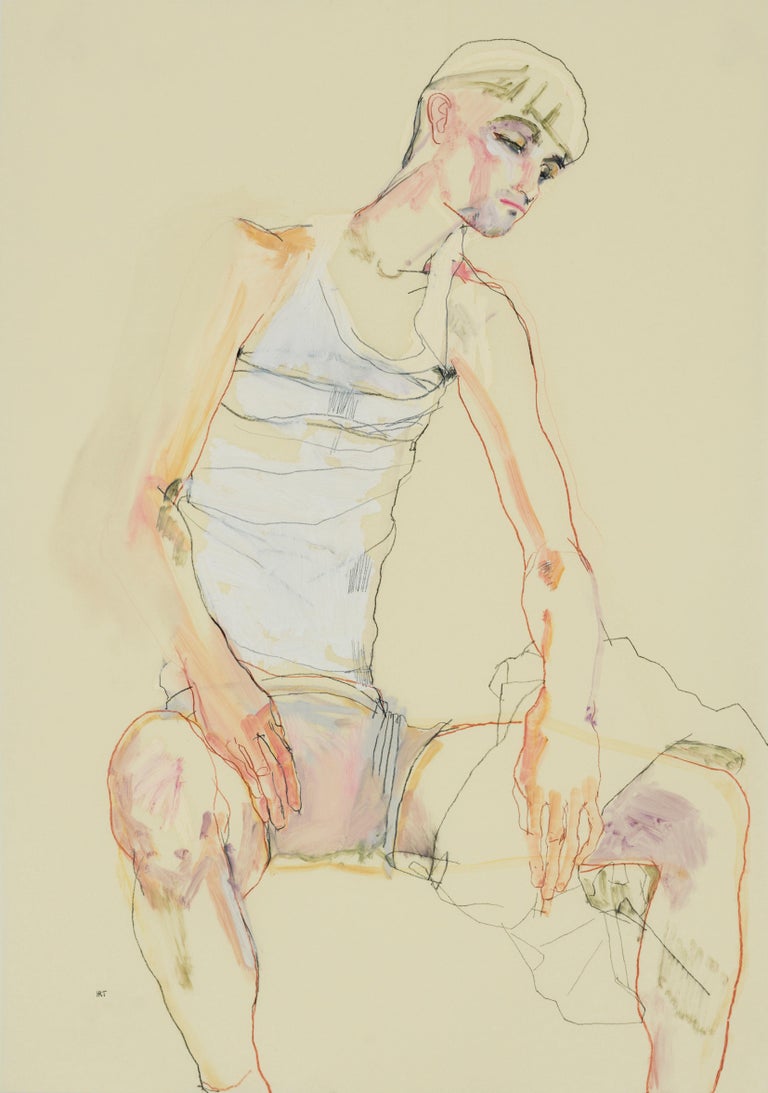 “Andrew V. is a recent graduate of Central Saint Martins and now a designer. Howard first spotted Andrew in a photo with another sitter, Michael R., a designer at Roksanda Ilinčić. Since their meeting, Andrew has sat for multiple portraits and has become as close to a muse as Howard allows, always needing to maintain mystery to allow a sense of discovery while working.” 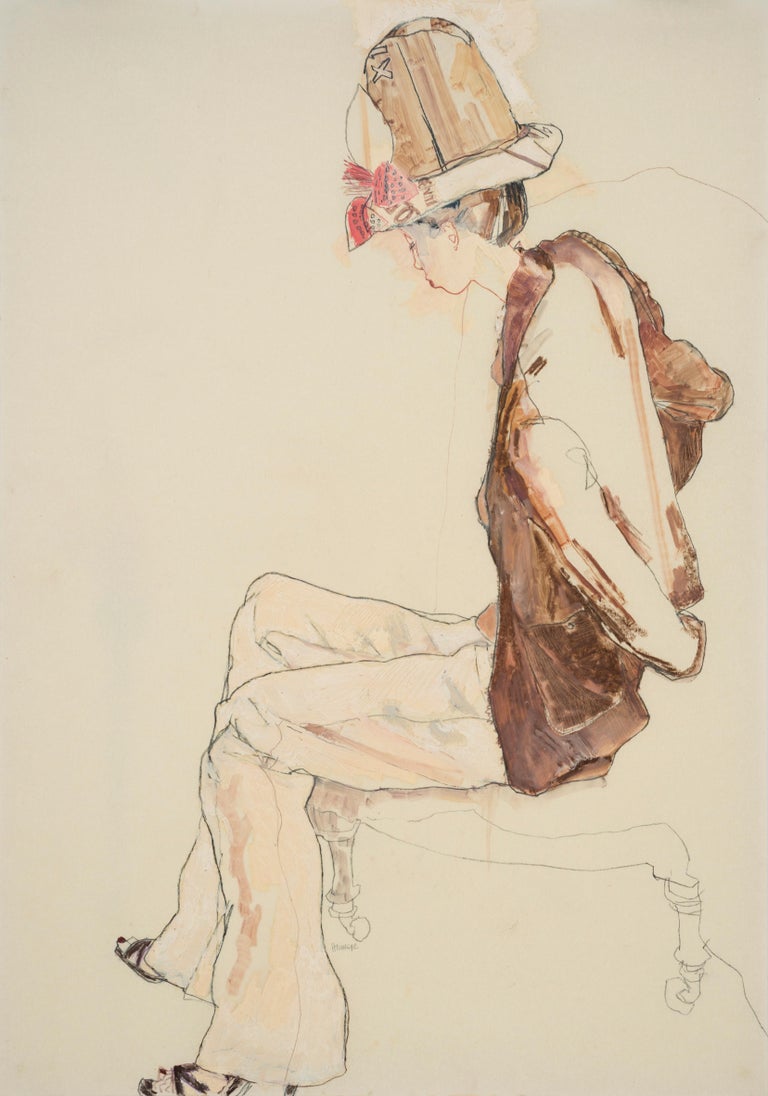 “At the time of this portrait, Maria N. was a teaching assistant working with Howard at Central Saint Martins. Howard was drawn to her naturally elegant posture and asked her to sit for him. She went on to sit for a number of works, always giving her all. Here, she is pictured wearing a hat by Stephen Jones.” 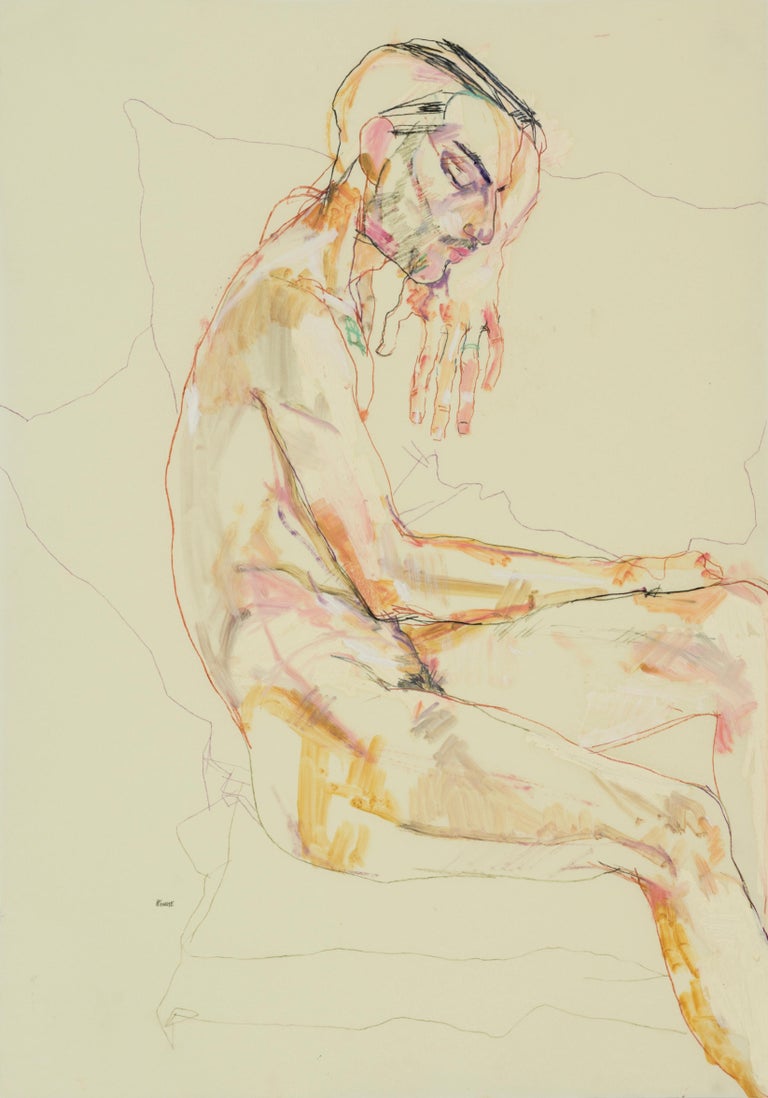 “Francesco is a Venetian-born, Florence-based creative working in print and textile design. He began sitting for Howard after they met at Central Saint Martins while he was designing Howard’s students’ degree-show catalogues. Howard noted his balletic movement and how in tune with his body he appeared to be. Francesco has sat for six portraits with Howard over the years, each emphasizing a stylized elegance.” 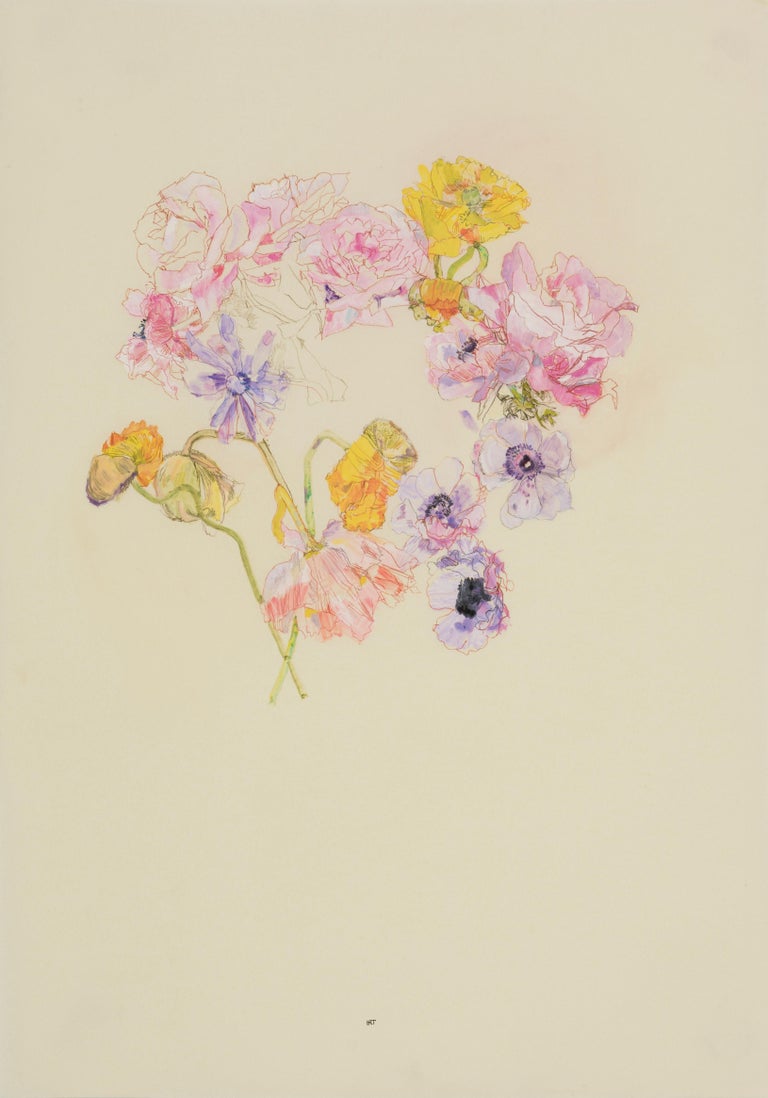 “When Howard does not have a sitter to work from, he prefers to paint flowers and still lifes. He never works from photographs, feeling them to be too ‘passive.’ Howard will often arrange flowers from his garden and follows their process of decay through multiple works of the same arrangement. He says of working from flowers that their delicacy and intricacy are the perfect test to train his eye and line until the next in-person sitting.”