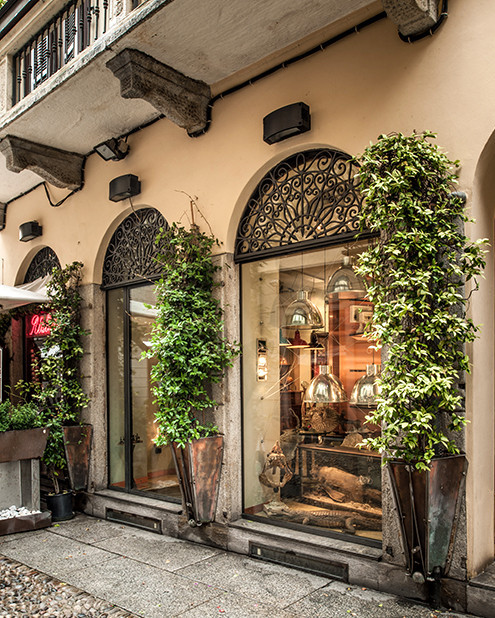 December 11, 2013The various wonders of Il Segno del Tempo occupy a street-front shop in Milan’s artsy Brera district. Top: A typical Il Segno vignette combines such disparate yet intriguing elements as an Italian sculpture of a carousel horse, ca. 1780, and an assortment of anatomical models, including an oversized papier-mâché mandible from France, ca. 1900.

Tempting as it may be to call Il Segno del Tempo a cabinet of curiosities, that description doesn’t even begin to do it justice.

This atmospherically lit warren of a design gallery — in Milan’s arty, cobblestoned Brera district — nearly overflows with the sort of artifacts you’re as likely to find in a natural history museum as an antiques shop, as well as the kind of furniture that looks like it had a former life on a factory floor.

“I like the idea that customers leave this place with a very particular idea of what they have seen,” says Pier Luigi Carboni, who started Il Segno del Tempo (“The Sign of the Times,” in Italian) some 25 years ago and continues to run it with his co-founder Pierangelo Marengo. “That overall impression is also part of the gallery experience, not only what’s inside.”

On a visit to the two-story shop this past spring, a vignette of dried fan coral and other aquatic creatures greeted guests upstairs, just inside a large display window, while a table to the left of the front door held antique globes of a variety of sizes and constructions, one petite version with countries created entirely of wood marquetry. Above them hung industrial-style pendant lamps, each disc-shaped metal shade enameled in a different Crayola-bright color. And behind a desk in the back, a display of highly polished wooden canes with exotically carved or embellished handles — a shop specialty — decorated a richly hued wall. 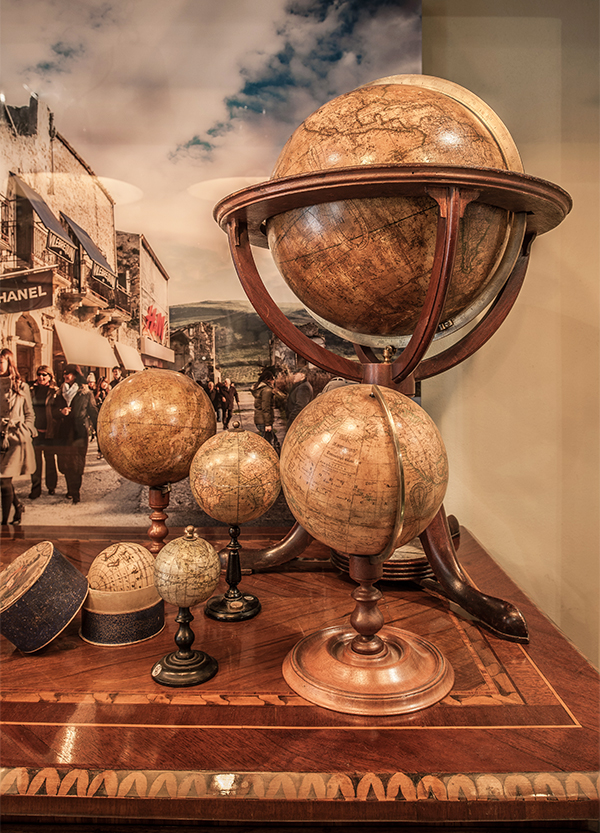 Whether miniature or massive, antique globes from the 18th and 19th centuries have become a particular focus of the gallery.

Below street level, meanwhile, a series of small rooms revealed more walking sticks, some held in a carved-bear wooden umbrella stand, others hung on the walls. Beyond, the plot thickened: Articulated wooden artists’ mannequins mixed in with bizarre scientific instruments and anatomic ephemera (a barometer here, a plaster model of a man’s arm musculature there) plus petite centuries-old replicas of classical-looking monuments, which travelers used to collect as Grand Tour souvenirs. Elsewhere, a Louis XIV marble salt cellar with a figuratively ornamented lead lid from the early 1600s sat just a few shelves down from a gilded miniature model of a human skeleton, made in America in the middle of the 20th century. And, finally, in an alcove toward a back office — past a larger-than-life-sized model of a mandible and an assortment of patinated-metal chairs, light fixtures and a dining table whose legs were made from a former engine casing — a small pastel-painted wooden carousel horse rested quietly on its pole.

For Carboni and Marango, this particular mix of genres and aesthetics developed rather organically over the years, 15 of them spent in this space. It grew out of the gallery’s initial establishment, something of an ad hoc affair itself. “We started from very different fields,” explains Carboni. “I’m an archeologist, Pierangelo’s an architect, but when we realized we wanted to build something together, we decided to go to industrial design school.”

Though they’d left their paying jobs to pursue graduate education, they still needed to fund their studies, so they began dealing in objets, taking pieces on consignment from an antiquaire friend and bringing them to flea markets. “We started with very little things,” continues Carboni. “But the concept has always been to work with collectors. That’s been the through-line of our business.” 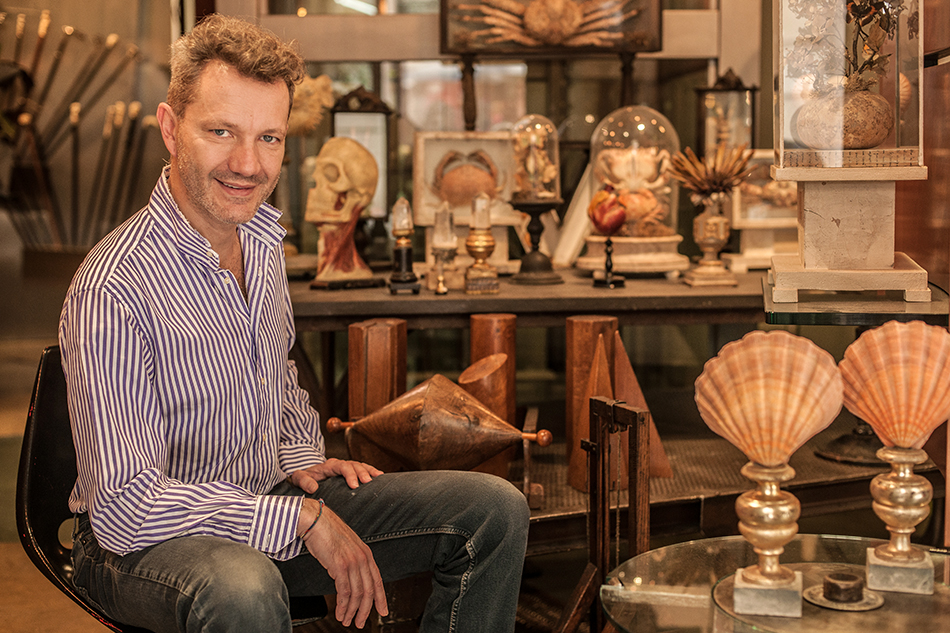 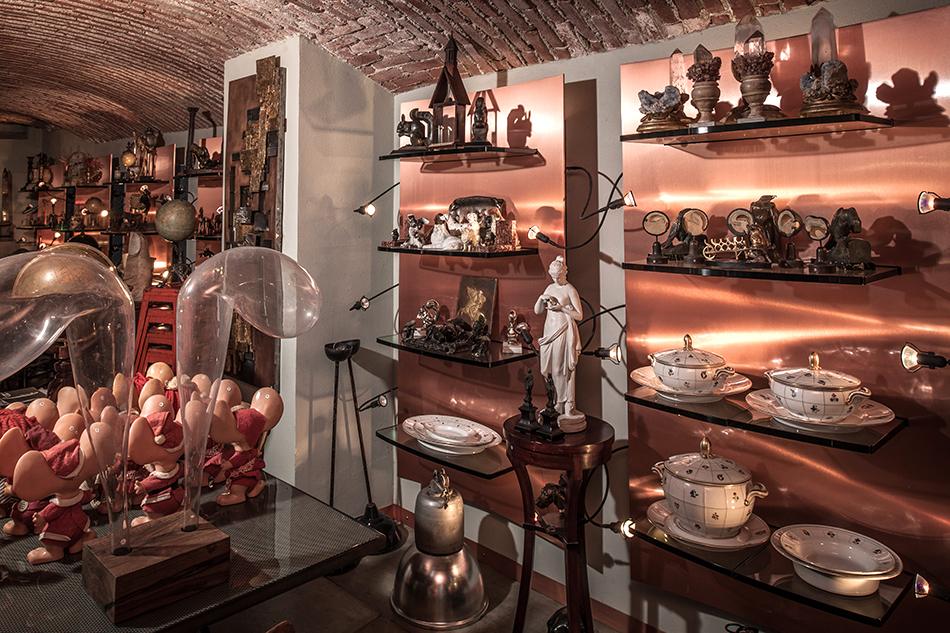 The duo created the gallery to showcase a wide range of ephemera, from various eras, locations and stylistic schools. 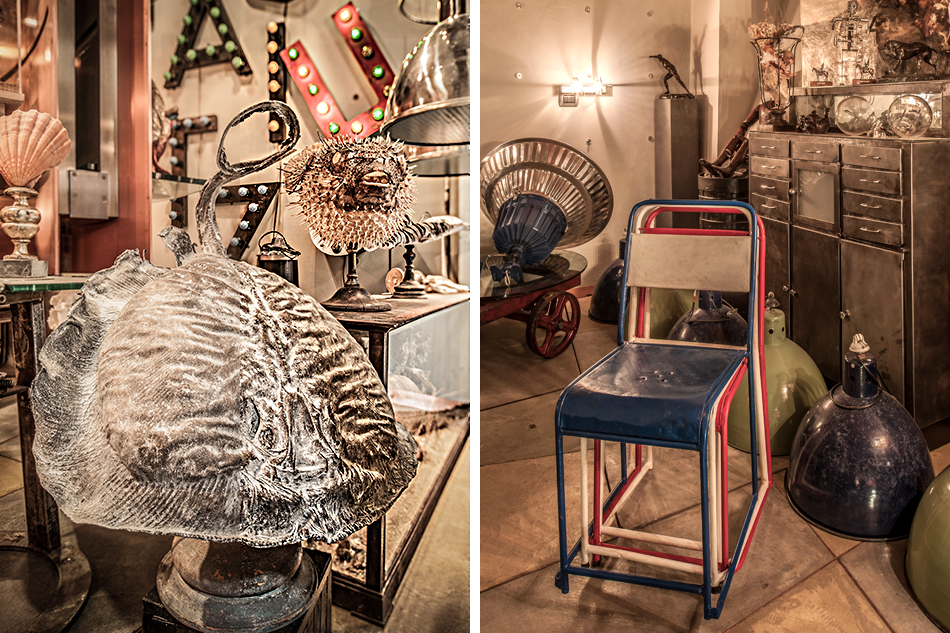 Left: Aquatic specimens abound, many of them part of a single late-19th-century Italian collection. Here, a mounted stingray holds pride of place. Right: Another corner of the gallery displays some industrial-minded pieces, including a trio of stackable German chairs from 1930. 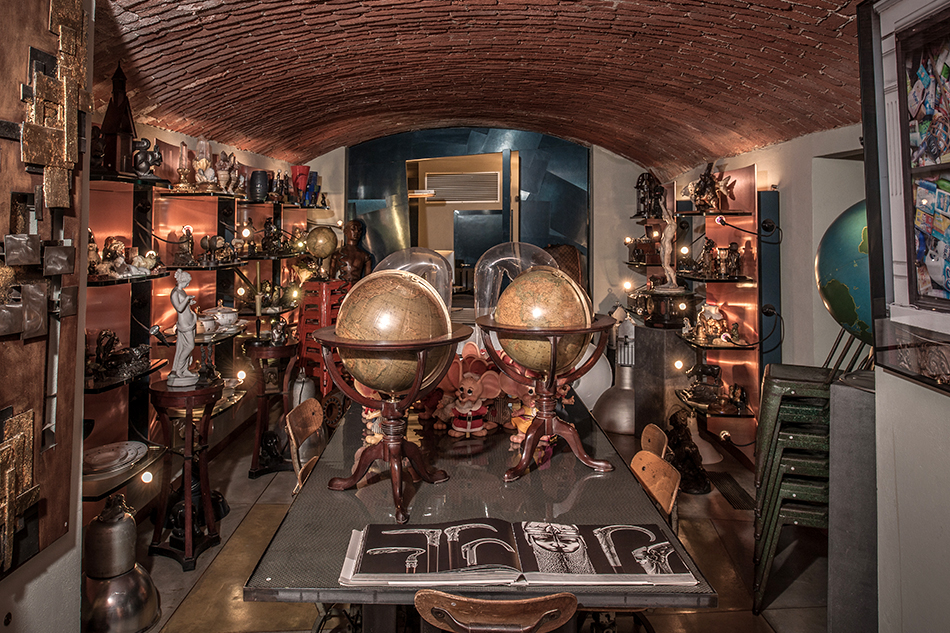 A long view of the shop’s lower-level barrel-vaulted brick gallery shows off – among much, much more – two globes from the London outfit Charles Smith & Son dating to about 1830. 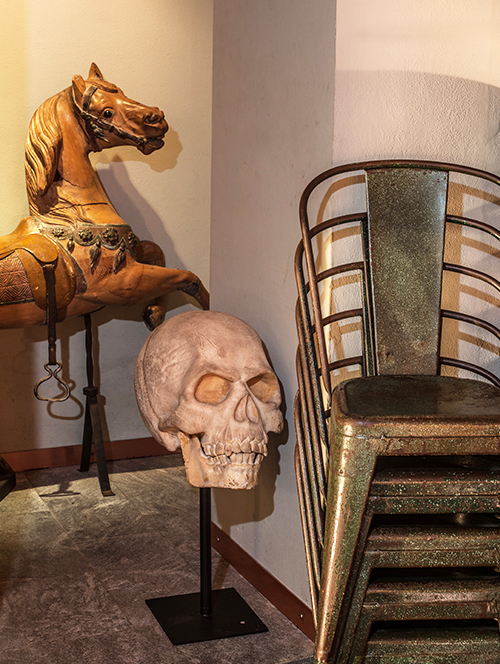 What would be unlikely juxtapositions elsewhere — an oversized Polyurethane sculpture of a skull, say, with a French 1890 carousel horse — are par for the course at Il Segno.

“At first, we had what we called our Twelve Apostles,” explains Marengo, referring to the early patrons whose concentrated collecting habits influenced the gallery’s direction. As one Apostle dropped out, another would take his or her place, and, as that happened, Il Segno’s focus would shift. “We used to sell antique jewelry, mainly Georgian and Victorian period, French and English, eighteenth and nineteenth centuries,” says Carboni. “Another field was arms and armor, and then scientific instruments, which have been a big field for us.”

“We followed the market, that’s the truth of it,” Marengo concludes. Carboni nods in agreement and says, “That’s one thing we learned very, very quickly: Never buy what you like; buy what the customer likes.”

One can’t help but feel, however, that the duo may be underestimating themselves — not to mention their taste level and deep expertise. It’s true that their clients continue to lead them: They clearly still concentrate on antique walking sticks, counting themselves among the world’s top three dealers in such items, and retaining prime cane collectors from their early days as regular clients. (They also sell silver tea strainers to a major player in that field, as well as nutcrackers to a couple who have a museum devoted to the subject in Washington state.) But their other chief market is now in what they call “industrials,” barely refurbished chairs, light fixtures and other pieces from late-19th- and early-to-mid-20th-century factories, plus mechanical odds and ends, some of which they repurpose as furniture of their own design. And when it comes to this field, it seems they were well ahead of the market. 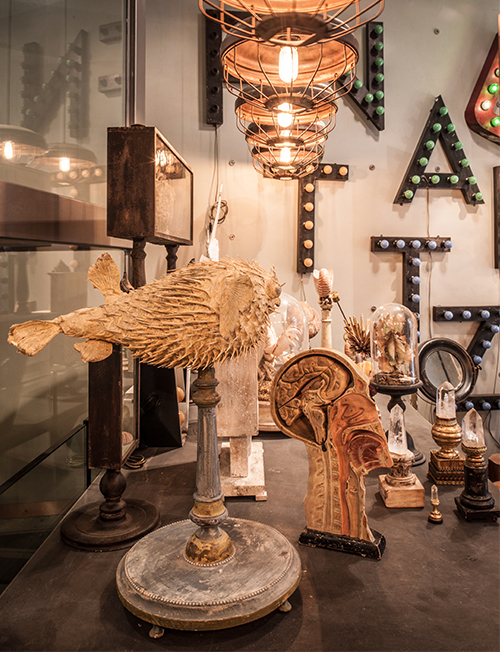 Painted and electrified letters from an American theater sign, ca. 1930, form the backdrop for a collection of beautifully mounted medical models and other natural curiosities.

Having begun by creating these industrials as display pieces for the wares they brought to antiques fairs in Europe and the U.S., the duo discovered they often received more interest in this furniture than in the items they had come to sell. “So we decided to go into that business,” says Marengo. “But in Italy, for almost a year and a half, we couldn’t sell one piece. We were very, very disappointed because in America, in France…”

“It simply was too early,” says Carboni, jumping in.

“But now everybody wants it,” continues Marengo. “It happened in other fields, too. We were too early, and if you’re not in the right moment with the right people in the right places, forget about it.”

These days, the gallery’s preponderance of large-format industrials means that Il Segno has practically outgrown its relatively spare square footage, which the duo designed to accommodate much smaller pieces.

“We have many, many items we’re not able to display,” says Marengo. “But if we like something, even if it’s big, we buy it. And then we just have to find a space for it — or sell something to make room.”

“I suppose we should consider getting a bigger space,” admits Carboni, with a quasi-resigned sigh. “But I still love this place, and people are fascinated by the atmosphere. It’s eclectic, yes, but it’s never boring.” 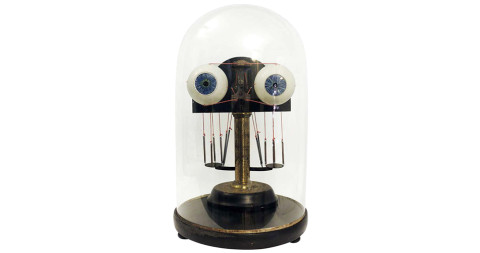 Quite rare to find, this scientific instrument models the movement of the eye muscles. Each red string is connected to a spring, whose different heights allow for the measurement of the muscles’ effort. Made by Angelo Arrighini in Milan at the end of the 19th century, it has been preserved under a glass dome. 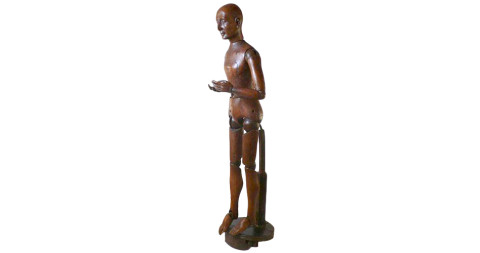 The size and early time period of this northern Italian piece make it unique: It’s life-size, and it comes from the late 17th or early 18th century. Made out of walnut wood, it is fully articulated, and its original adjustable stand with round base remains intact. Its hands and face are superbly sculpted and engraved, the latter with a remarkably intense expression. 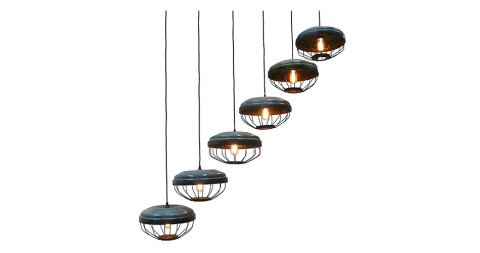 These lamps come from an American industrial ironing factory in New Orleans. Now rewired for modern use, they are made out of green-colored copper, with an iron cage to protect the bulbs. The color is original, and some rust here and there signals their age. 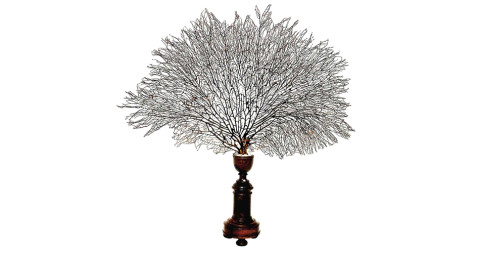 This fine and highly decorative piece comes from an Italian collection of natural specimens assembled toward the end of the 1800s. The neoclassical base, which takes the shape of an amphora at its top, is made of olive wood. Despite being such a fragile object, it’s in an excellent state of preservation. 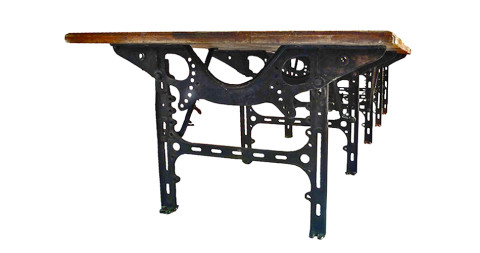 This industrial working table is of exceptional scale — 13 feet by 4 feet — and it is adjustable in height, which is especially difficult to find. The structure of the design is excellent. 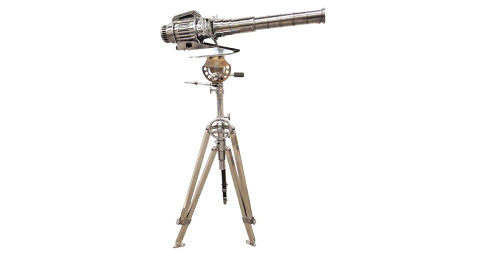 It is really very unusual to find such a complete and strongly decorative piece. The tripod is scientifically precise in its orientation, which is fully adjustable. And its design is among the purest and most streamlined of projectors from this period.