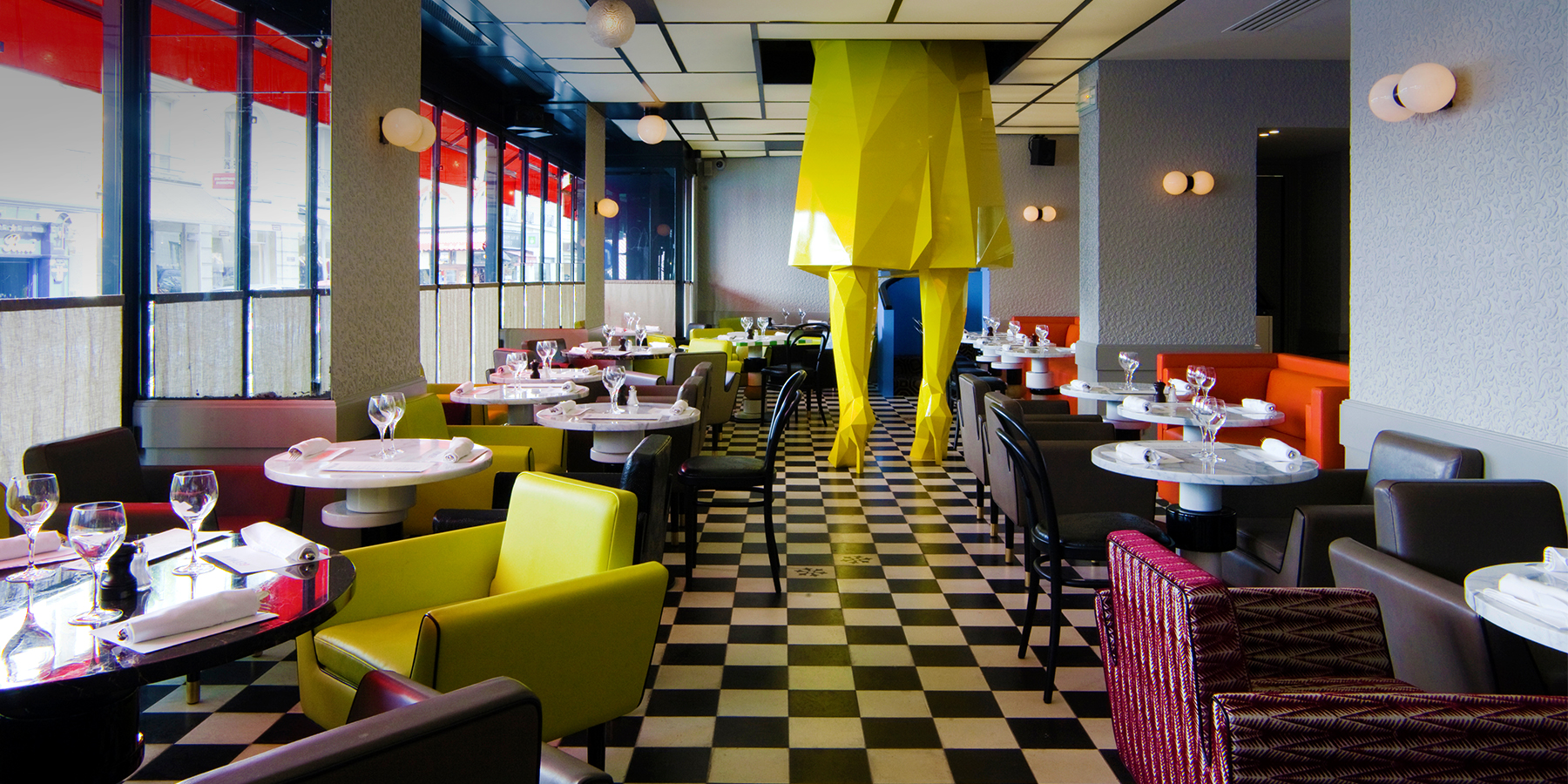 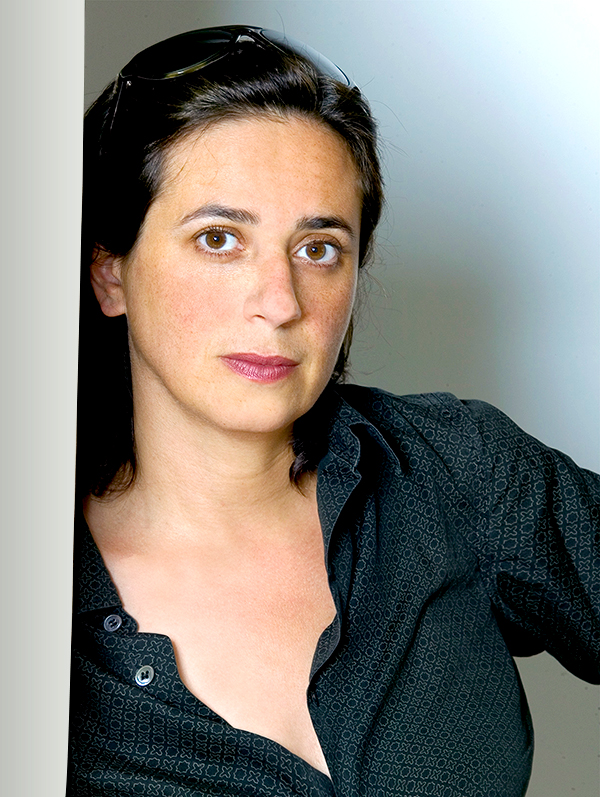 March 6, 2013Top: The Paris-based designer India Mahdavi is known for creating interiors full of whimsy and color, including Café Germain in the 6th Arrondissement, which is punctuated by a massive sculpture called Sophie by the artist Xavier Veilhan. Photo by Derek Hudson; all images courtesy of India Mahdavi

A few years ago, Paris-based interior designer India Madhavi made a trip to visit the Taj Mahal. In some ways, it was a journey back to her roots: She owes her Christian name, she explains, to the fact that she was conceived in the country. Upon arrival, she found her driver, who was carrying a board printed with the words “Miss India.” After getting in the car, she quickly realized something was amiss. “Every two seconds, he turned around and looked at me,” she recounts lightheartedly. “I said, ‘Do you have a problem?’ and he said, “Are you really Miss India?’ And suddenly it hit me that he was asking if I was the beauty queen! I can only imagine he must have been so excited to come and get Miss India. And then he sees me!”

In the design world, there is little chance of mistaking Mahdavi’s identity. Since setting up her own firm in 1999, she has become one of France’s leading female interior designers. Among other projects, she has revamped the bar at London’s iconic Connaught Hotel, decorated Lanvin designer Alber Elbaz’s latest apartment and been responsible for the interiors of a number of ultra-stylish stays, such as the Monte-Carlo Beach Hotel in Monaco, the Hotel On Rivington in Manhattan and the Condesa DF in Mexico City.

She has also developed an unmistakable aesthetic. “Her style is very recognizable,” notes the French hotelier and restaurateur Thierry Costes, one of her most steadfast clients. “She’s created her own identity, characterized by a relaxed chic and a sublime way with color.” 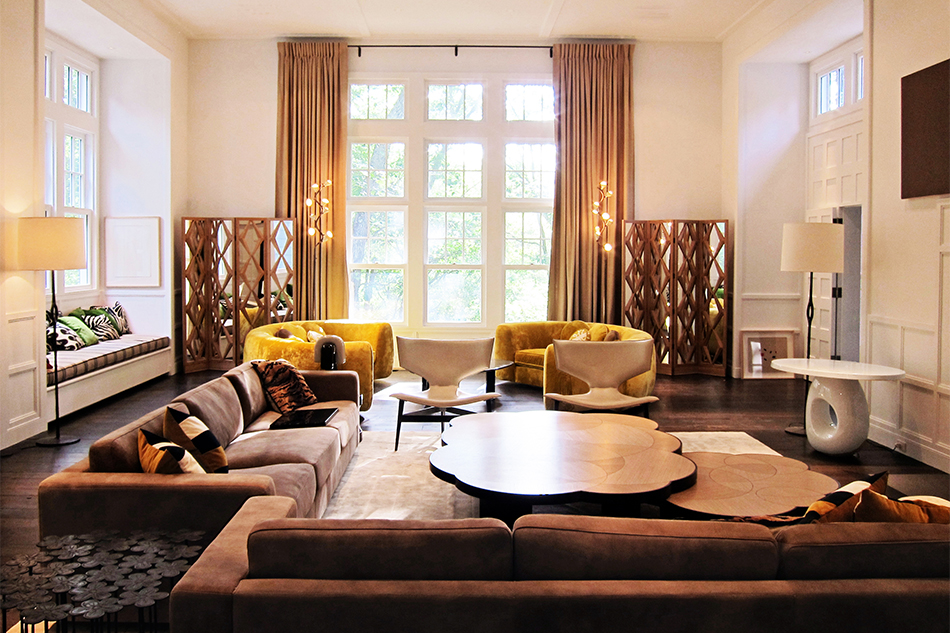 Mahdavi designed nearly all the furniture for the living room of this Connecticut residence, including the LSD screens by the window, the yellow JellyPea sofas and the brown Jetlag sofas. The flower-shaped table is by Hubert Legall, and the white leather chairs are vintage. 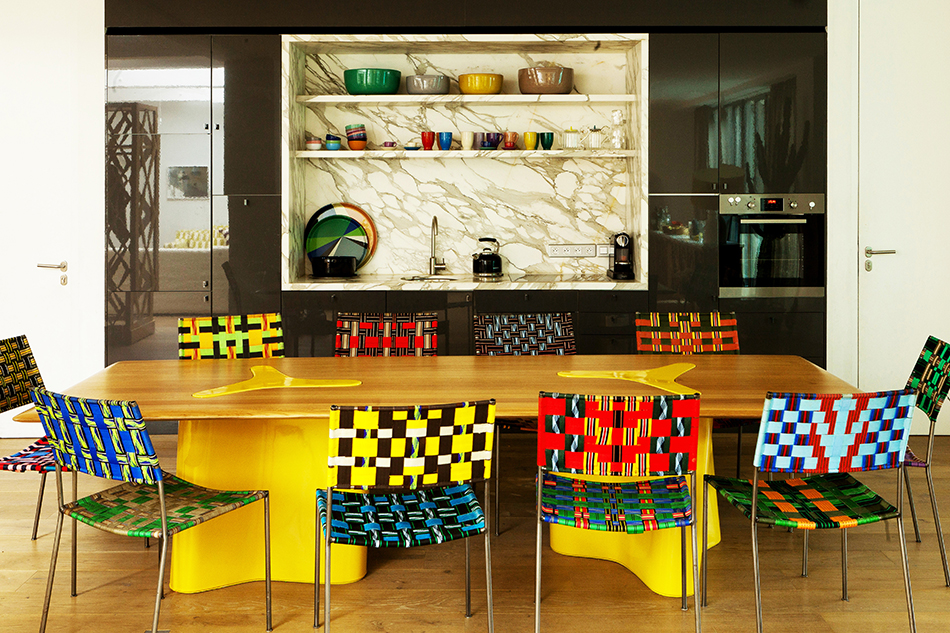 The designer’s love of color is on display at this Paris apartment, where Uncle chairs by Franz West surround an oak-and-ceramic table by Mahdavi. 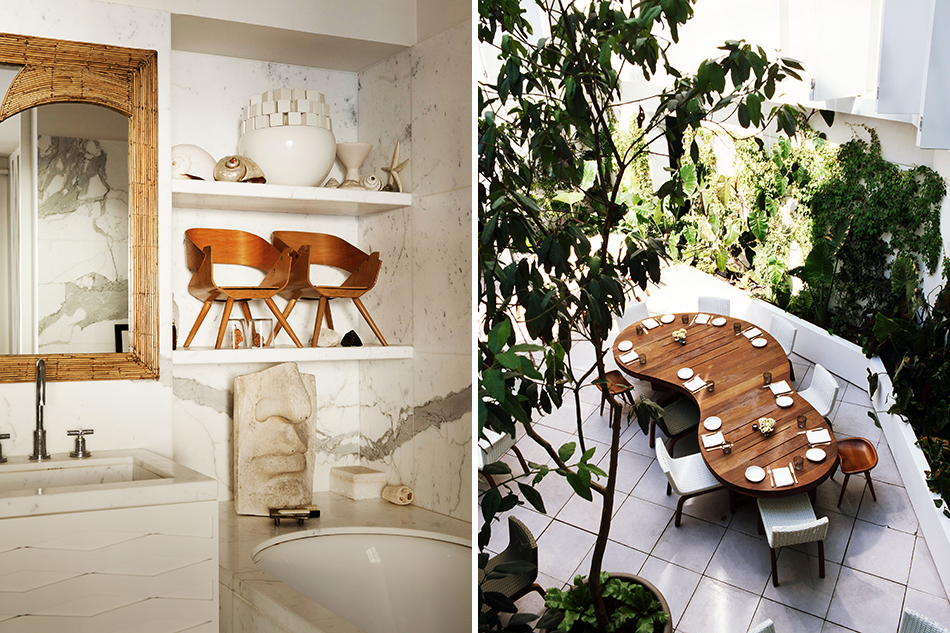 Left: Mahdavi’s Paris bathroom doubles as her “tiny museum,” with a white cube vase by Martine Bedin and her seashell collection, plus children’s chairs and a plaster nose sculpture, both from the Paris Puces de St.-Ouen. Right: An outdoor dining area at the Condesa DF hotel in Mexico City 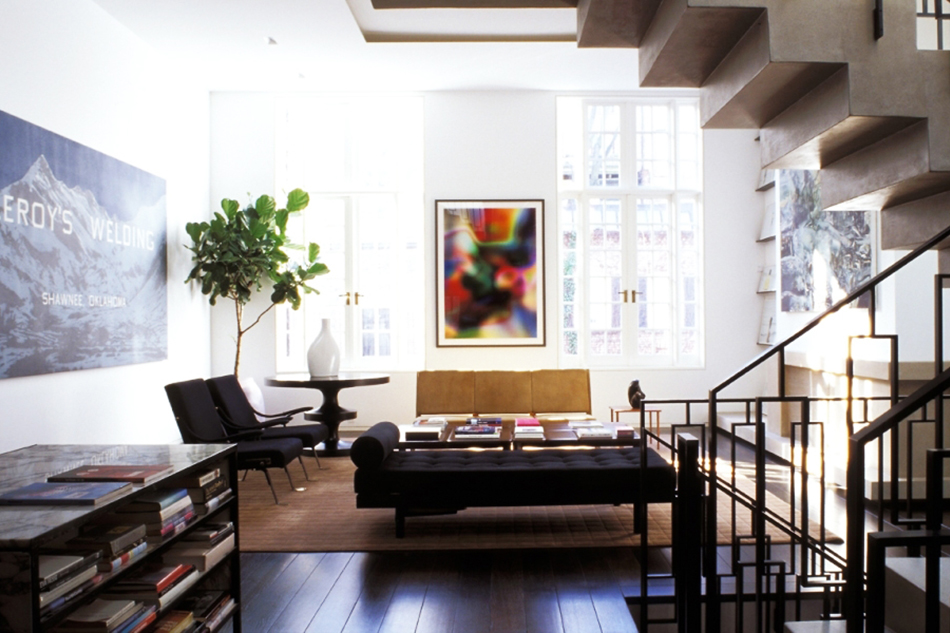 The more sedate color palette in a New York apartment ensures that the furniture — which includes a black daybed by Jean Prouvé and Mahdavi’s own dark-wood Bishop table in front of the window — doesn’t compete with the owner’s art collection. 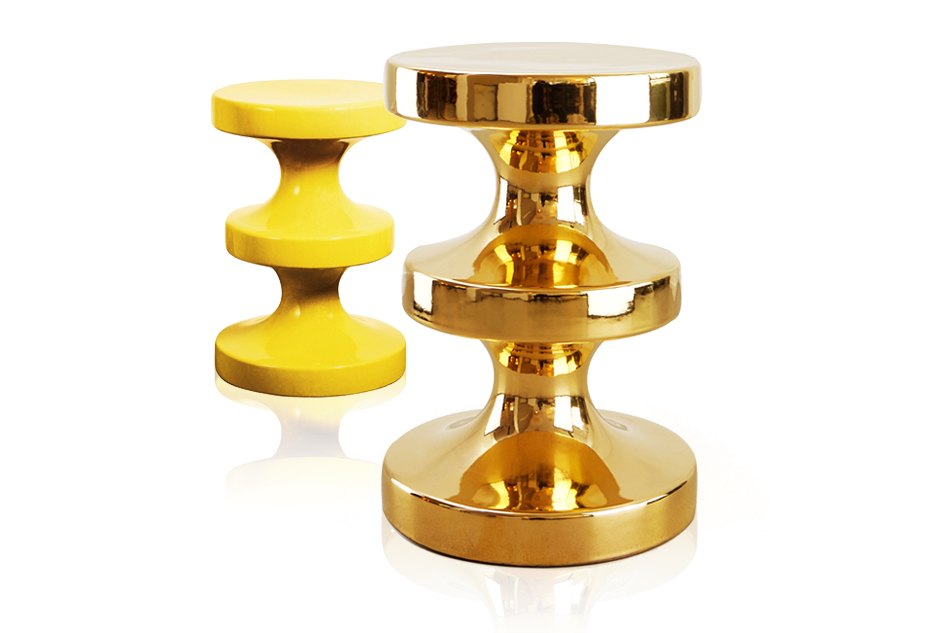 Mahdavi’s versatile design of the Bishop, which comes in a variety of colors and finishes, means it can be used as a stool or a small table. 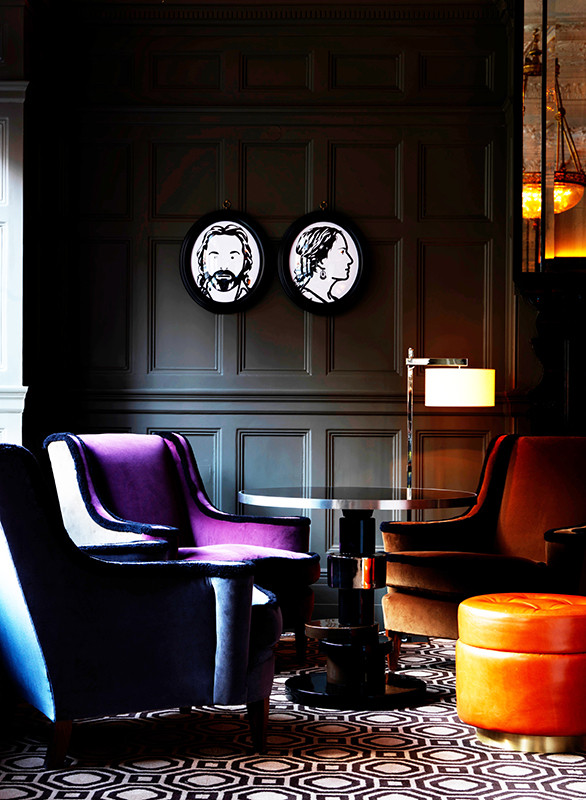 For her 2008 makeover of the Coburg Bar in London’s storied Connaught hotel, Mahdavi gave the traditionally clubby atmosphere a contemporary twist using colored fabrics, a graphic carpet from Tai Ping, an orange button stool of her own design and riffs on the classic cameo by Julian Opie.

For her, bright hues express joie de vivre, and her work always radiates a sense of fun and whimsy. “I think a home should be quite happy,” she explains. She also likes lacquer and the challenge of putting improbable things together. Her look, she says, is a “max of mix,” and it often brings together a savvy association of geometric, floral and animal prints. Another word she often uses to describe her style is “nomadic” — a notion quite firmly rooted in her childhood.

Mahdavi claims her interest in creating homes for others comes from her lack of having a permanent one as she was growing up. Born in Tehran to an Iranian father, whom she describes as “an eternal student,” and an Egyptian-Scottish mother, she was 18 months old when her family emigrated to Cambridge, Massachusetts — an experience that made a lasting impression on her tastes. “My life started in Technicolor,” she explains. “It was the mid-sixties and I remember this happiness related to these bright American hues.” Later, they moved to Heidelberg, Germany, where, she says, the family home “looked like the Addams Family house,” and then to the South of France, where she developed a fascination for building huts in the garden. Her parents, she says, had little interest in design. Her maternal grandmother, however, was what she calls “a woman of style.” A wealthy Egyptian, she had a painting and antiques collection, dressed in haute couture and smoked cigars. She would camp out and go horseback riding by the pyramids and rent out the top floor of the Hôtel Crillon when in Paris.

Mahdavi herself wanted to make movies, but after failing to get into film school, she initially studied architecture in Paris before transferring to Parsons School of Design in New York. In 1990, back in France, she joined Christian Liaigre’s office, where she stayed for seven years. Her solo career got off to a swift start soon after. Being a woman, she admits, was a great help. “It’s been an advantage all the way because you get more attention,” she affirms.

“Her work is subtle, and she gives a soul to the spaces she creates.”— Alber Elbaz

As with the Connaught, in 2009 Mahdavi was charged with the delicate task of bestowing a fresh look upon a hotel with a long legacy, in this case the Monte-Carlo Beach Hotel in Monaco, whose lobby bar is pictured here.

Within no time, she was designing the London townhouse and French holiday home of Joseph Ettedgui, the late British fashion guru. The commission from Elbaz came more recently. “He called one day out of the blue and asked if he could come to see me straight away,” she relates. Although understandably circumspect, she describes the result as “eclectic, quite masculine and personal. Working with people who have very strong personalities is interesting for me,” she declares. “It suddenly becomes more like portraiture than simply designing a house.” Elbaz enthuses: “Her work is subtle, and she gives a soul to the spaces she creates. I loved working with India. We had so much fun!”

Currently on the drawing board is a new project with Thierry Costes: the Café Français on Place de Bastille, due to open in mid-March. She is also completing the Hôtel du Cloître, in Arles, and collaborating on a new hotel called L’Apogée, in Courchevel, with fellow interior designer Joseph Dirand. Then there are residences in Cap-Ferret, Saint-Jean-Cap-Ferrat and London. Mahdavi also recently published a book with Soline Delos called Home Chic (it’s due out in the U.S. this spring), which lists her tips for creating a successful interior, and she is constantly adding to her furniture collection, which is distributed through both Ralph Pucci and her own showroom in Paris. “It’s actually more of a non-collection,” she says, “because I’ve never thought of designing things for a room as a whole.” Instead, the pieces are simply creations devised for specific residential projects that she’s decided to give a second life. A recent favorite is the black-lacquer-and-bronze “Alber” table, which is named for Elbaz and can be separated into two parts. The idea is to work on one half and eat on the other. Her all-time bestseller, meanwhile, is a ceramic stool-cum-table known as the Bishop because of its resemblance to a chess piece. The analogy seems fitting: Design aficionados are constantly on the lookout for Mahdavi’s next move. 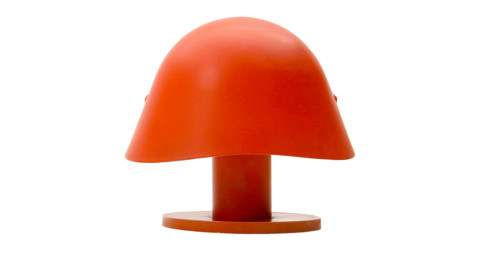 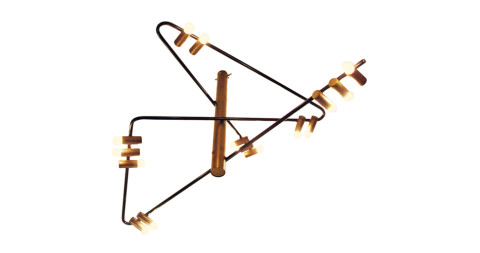 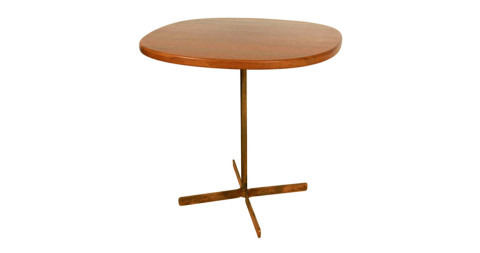 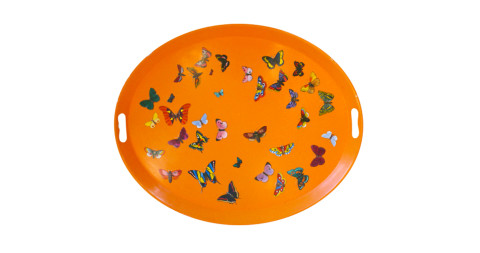 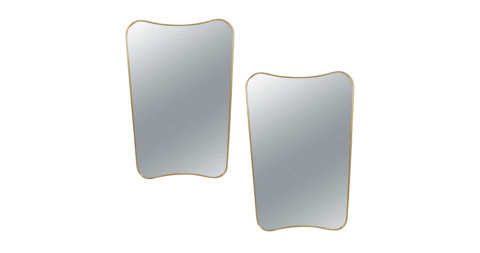 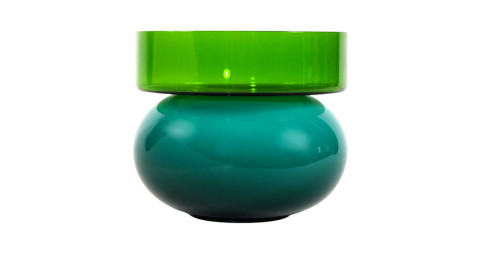