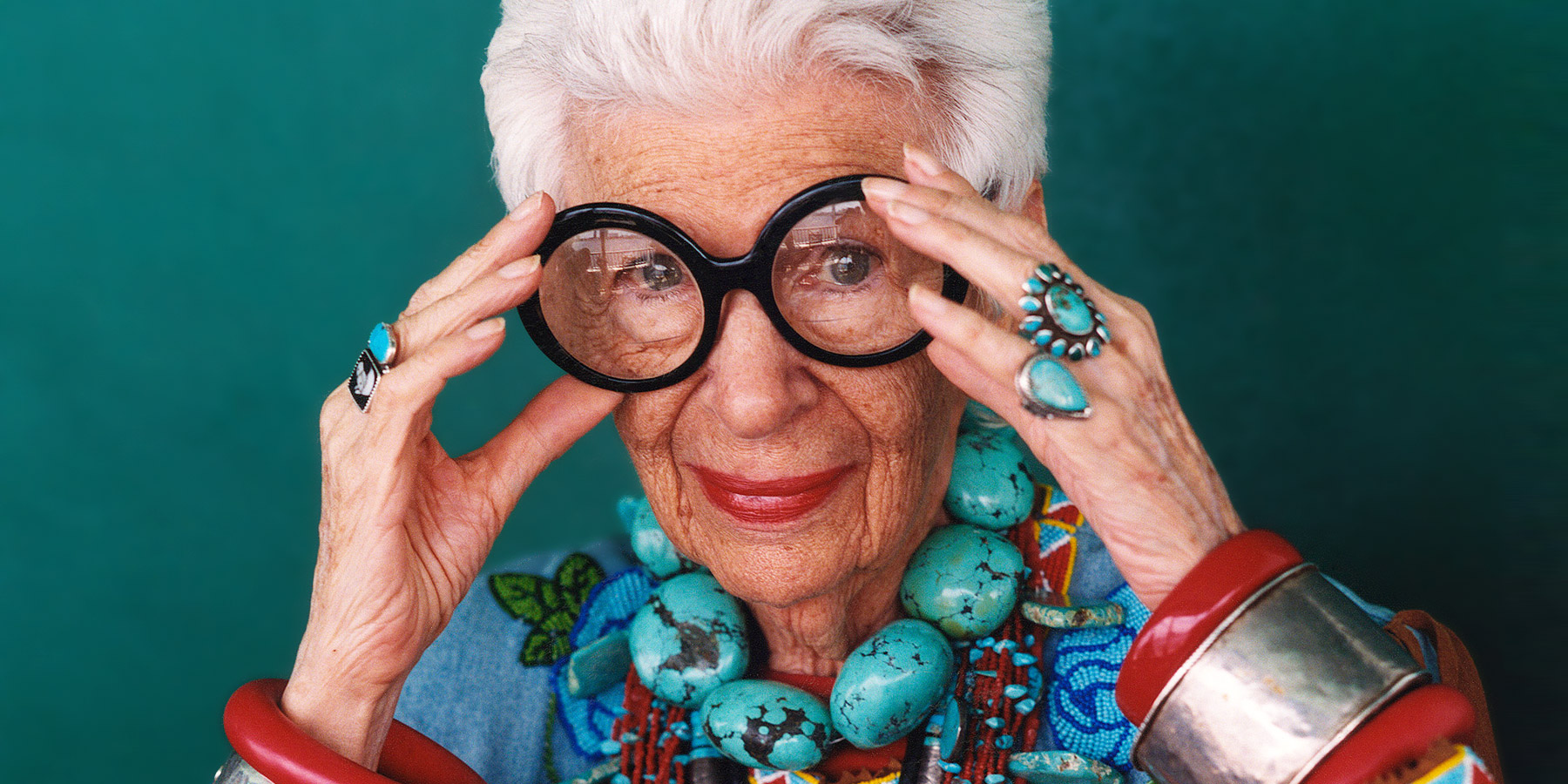 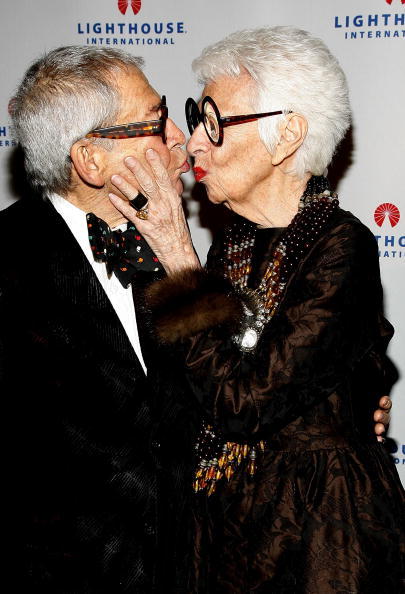 May 8, 2013Apfel and her husband, Carl, have been married for 65 years;
together, they founded the historically minded textiles company Old World Weavers in 1950.

The ranks of nonagenarian style icons may be small, but Iris Apfel is certainly the leader of this elite brigade. The 91-year-old Apfel, born in New York City and educated at the University of Wisconsin, has uniquely bridged two aesthetic realms for more than six decades: historic interior design and outré fashion.

In the first arena, Apfel and her husband, Carl, founded Old World Weavers in 1950 and immediately became the go-to source for authentic period textiles. Among other notable jobs, she consulted on restoration projects at the White House for no fewer than nine presidents.

As far as fashion goes, Apfel — almost always seen in her huge, round, thickly framed black glasses — is so chic a couture collector that the Metropolitan Museum of Art gave her an exhibition in 2005: “Rara Avis (Rare Bird): The Irreverant Iris Apfel.” Her penchant for combining divergent pieces has always been her signature. The Met catalogue put it this way: “Her originality is typically revealed in her mixing of high and low fashions — Dior haute couture with flea market finds, nineteenth-century ecclesiastical vestments with Dolce & Gabbana lizard trousers.”

These days, Apfel is long retired from the working world, but she still travels the globe constantly, dispensing sometimes-bracing pearls of wisdom. As she puts it, “I have strong opinions about everything. I’m not a wishy-washy person.”

Apfel next stop is a talk called “A Life in Collecting,” slated for May 15 at the Museum of Arts and Design, in New York. The final installment of “After the Museum: The Home Front 2013,” a series sponsored by 1stdibs, the event will see Apfel interviewed by T Magazine’s editor in chief Deborah Needleman. (Click here for more information.) Recently, 1stdibs’ Ted Loos caught up with Apfel over the phone while she was at home in sunny Palm Beach.

I’m very thrilled. I never expected to be a geriatric starlet.

Recently I was invited by Swarovski to speak at their convention in Vienna. And I spent some time in London on the way back, since the Royal Academy and the V&A had contacted me to do some programming.

I can’t believe that I’m so fortunate at this stage of my life: I’m 91. I give thanks constantly. It’s unbelievable.

Who are your style icons?

Years ago, I collected various designers. I was particular crazy about Dior when Gianfranco Ferré was there. I have a lot of that. And I’ve always collected and admired Ralph Rucci.

It’s mostly past tense, my collecting. There was a designer who worked for Lanvin who was the most underappreciated designer ever, Jules-François Crahay — but he was Belgian, and he never got enough respect. You know how the French are.

How many pieces do you have?

I don’t count. Including jewelry, thousands of things.

In terms of your personal buying, what was your philosophy?

I never collected clothes to collect clothes. I bought for me. To buy things and put them in a box to me is kind of dopey. 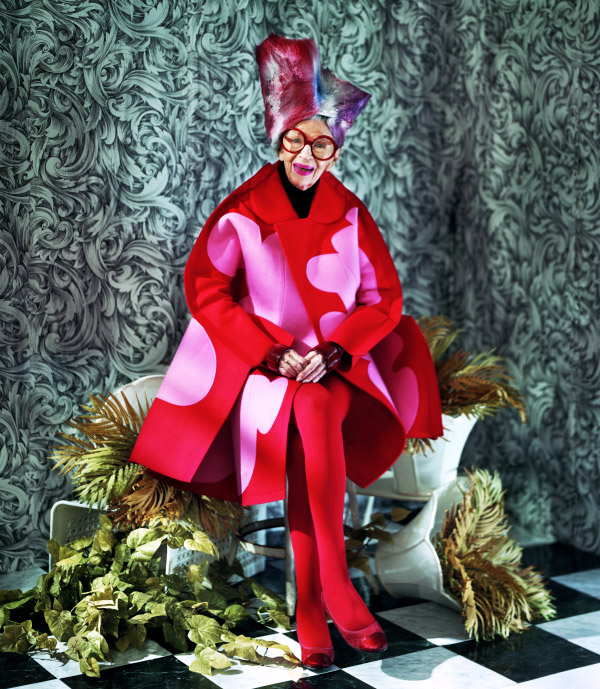 Iris Apfel, 2012, by Jeff Bark, who photographed Apfel wearing Rei Kawakubo for Comme des Garçons for an issue of Dazed & Confused. Courtesy of the artist and Hasted Kraeutler © Jeff Bark

How do you describe your personal style?

I never describe my style. That’s for other people to do. When I had my show at the Met, Roberta Smith had the best line in the New York Times: “Before multiculturalism was a word, Ms. Apfel was wearing it.”

The show created a stir.

I don’t get too excited about things — I go with the flow. It turned out to be a smash, and I never expected it to be.

It started out as an accessories show, mostly jewelry. But then it morphed into a style show. [Costume Institute curator] Harold Koda felt, rightly so, that showing accessories out of context made no sense. We wanted to show how you could put them together and what you could do with them. They picked the outfits, and I was free to accessorize them any way I chose — the way I did seventy years ago, or with all new things.

In terms of Old World Weavers, what are you most proud of?

Everything was as near perfection as it could be. I get crazy when young people — who have no sense about or passion about fabrics — take a beautiful old design and think they can improve it with harsh colors. I didn’t design fabrics or redesign them —everything we did was totally authentic and of the period. We knocked ourselves out to get it as close as humanly possible. 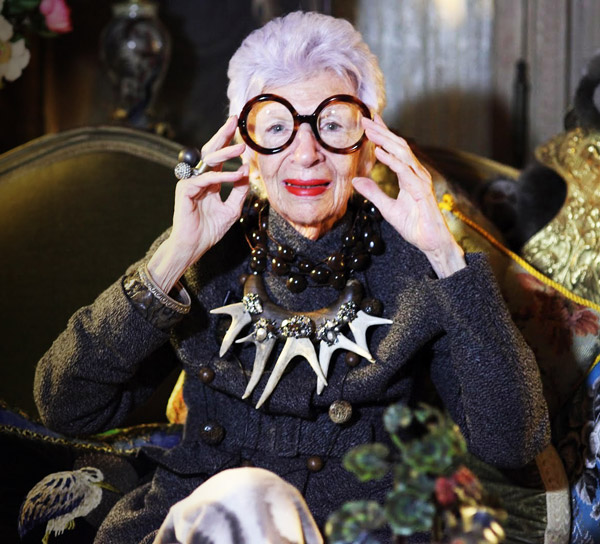 Did you get to hang out with any presidents during all those White House projects?

Well, the presidents don’t want any part of it. But we did deal with some of their wives. And let me tell you, the most interested of all the wives? Pat Nixon. She really cared passionately about the house. Some didn’t give a damn, and others gave it lip service. But she came to all the meetings.

What’s your advice to young collectors?

Well, you have to work at it. You can’t just start if you don’t know anything. You have to read about it, take classes, go to museums, hone your eye and talk to as many people as you can. Own your own taste. Find out who you are. I never bought something if it was of great historical value but I didn’t like it.

I think the worst mistake women make is looking in the mirror and seeing someone else. Which they do all the time, unhappily.

My husband. He’s a darling, and we’ve been married 65 years.