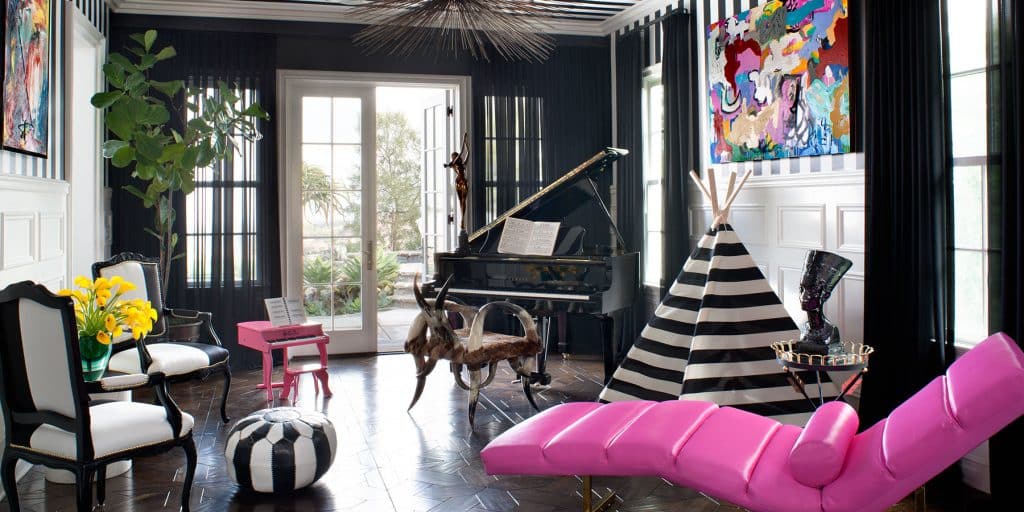 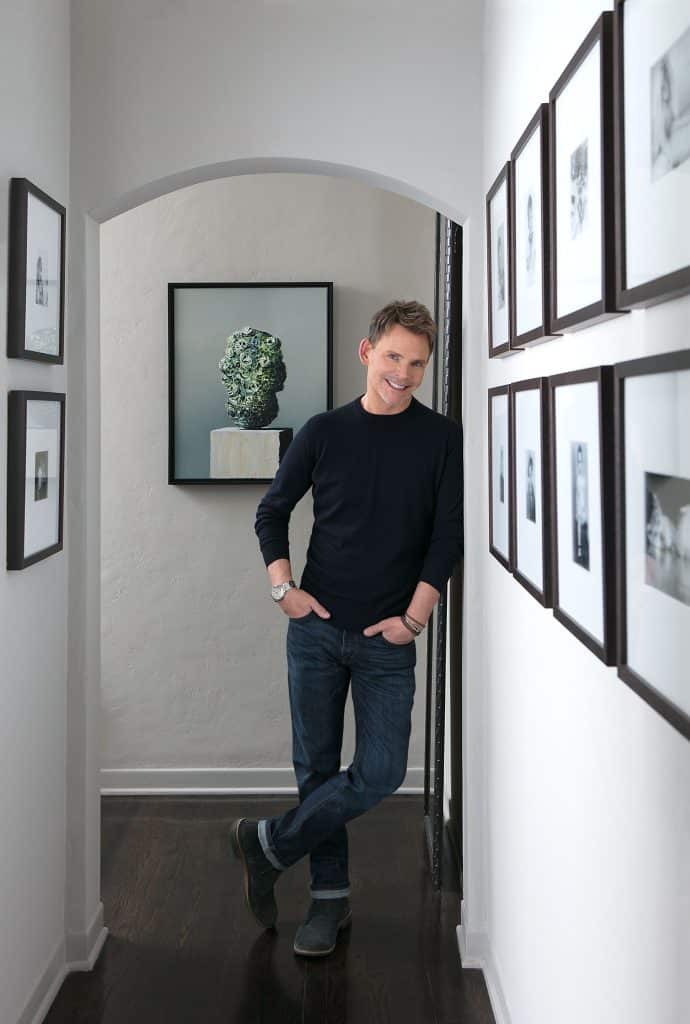 April 14, 2019Jeff Andrews is one of Hollywood’s most sought-after designers for his opulent and livable interiors, many of which are showcased in his first book (photo by Stephen Busken). Top: In this playroom designed for Kourtney Kardashian’s children, Andrews pulled in the home’s reigning black-and-white palette and anchored the space with her father’s piano, pairing it with a horn chair that is none too precious. A few bold bursts of hot pink provide added playfulness (photo by Grey Crawford).

Andrews — whose high-profile clientele includes actor Michael C. Hall, Ryan Seacrest and several Kardashians — is known for lavishly outfitted interiors brimming with exuberant flair and drama. He creates theatricality in myriad ways, not least through the addition of such bold finishes and details as a silver-leafed ceiling that reflects a chandelier’s light and an unexpectedly ornate brass sconce hanging within an airy modern kitchen.

The boldly elegant style he brings to residential interiors comprises a mix of textured wallpaper, graphic flooring, sculptural furnishings and beautiful light fixtures, all carefully deployed to avoid an overwhelming result. “Balance is key to successful design. Subtlety creates the harmony you want in your home,” he says. “We also want each space to be original, to say something that reflects the homeowner’s personality.” 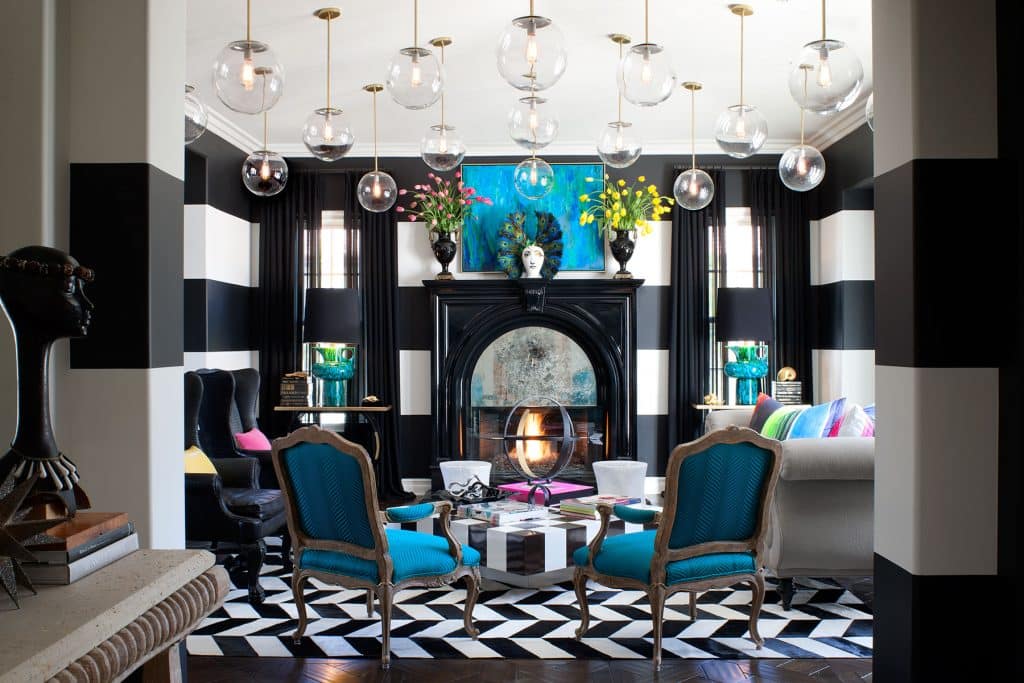 Andrews designed this exuberant living room for Kardashian — who wanted Alice in Wonderland whimsy — with graphic black-and-white floors and walls, bursts of jewel tones and globe pendants that appear to float above the room. Photo by Grey Crawford 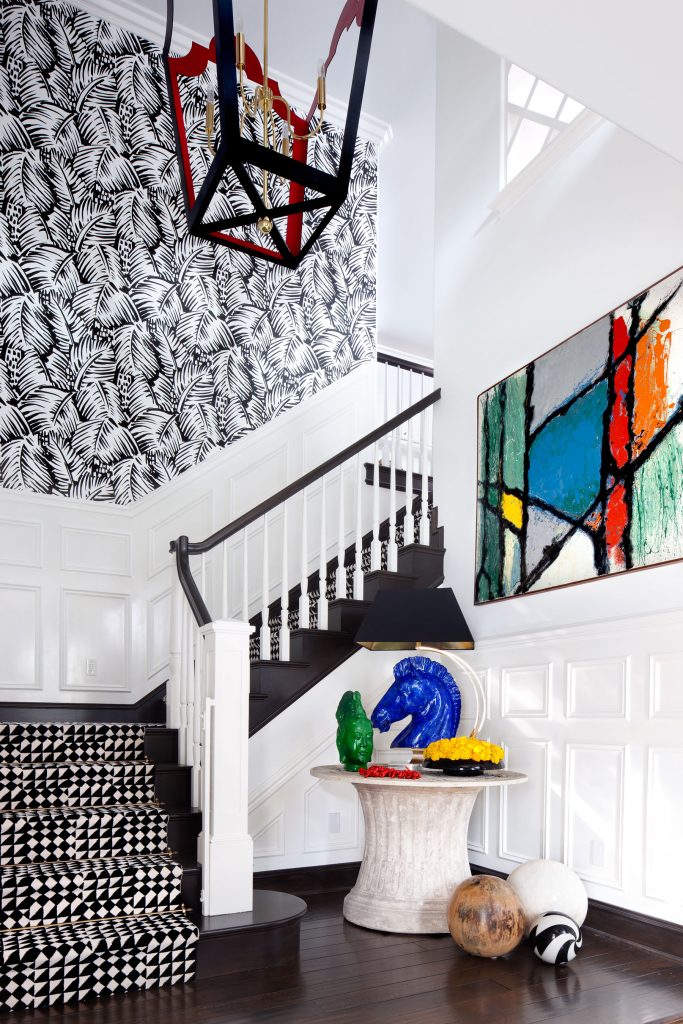 Andrews covered the walls of Kardashian’s foyer in black-and-white Hermès wallpaper, which, he writes, “allows Crayola-bright art to pop.”

Andrews’s eye for the theatrical is not surprising, given his background in performance. Growing up in a variety of Southern California locales, he developed a passion for musical theater that led him to study and pursue a career in dance. As a choreographer, he traveled the world and fell in love with all the elements that go into a performance, from wardrobe to staging to set design. By the age of 25, however, he had grown weary of the nomadic life. He returned to Los Angeles after choreographing at the Lido on the Champs-Élysées in Paris, but he still craved “the sense of home I had never fully felt before,” he writes in the new book. That desire impelled him to buy the 1920s Spanish bungalow that became his first design laboratory.

Settling back into Southern California prompted Andrews to think about what he really wanted to do in life. Working on outfitting his own house — scouring L.A.’s design stores and vintage shops for furniture, art and objects — provided a sort of epiphany. Despite having no formal training, he’d always had a penchant for interiors, reinventing his childhood bedroom every time his family moved. Design felt right for a second act.

In 1995, he started styling and decorating homes as a favor for close friends, and before long, a mutual acquaintance introduced him to Eleanor Mondale, daughter of former vice president Walter Mondale. The actress-turned-journalist, who died in 2011, had just purchased a 1950s California ranch-style home in L.A.’s Los Feliz neighborhood, and she was interested in having Andrews do some styling. As they began working together, they formed a tight friendship, and she became his first real interior design client. That debut project “gave me the confidence to switch careers and pursue design,” recalls Andrews, who went on to do several other Mondale properties. 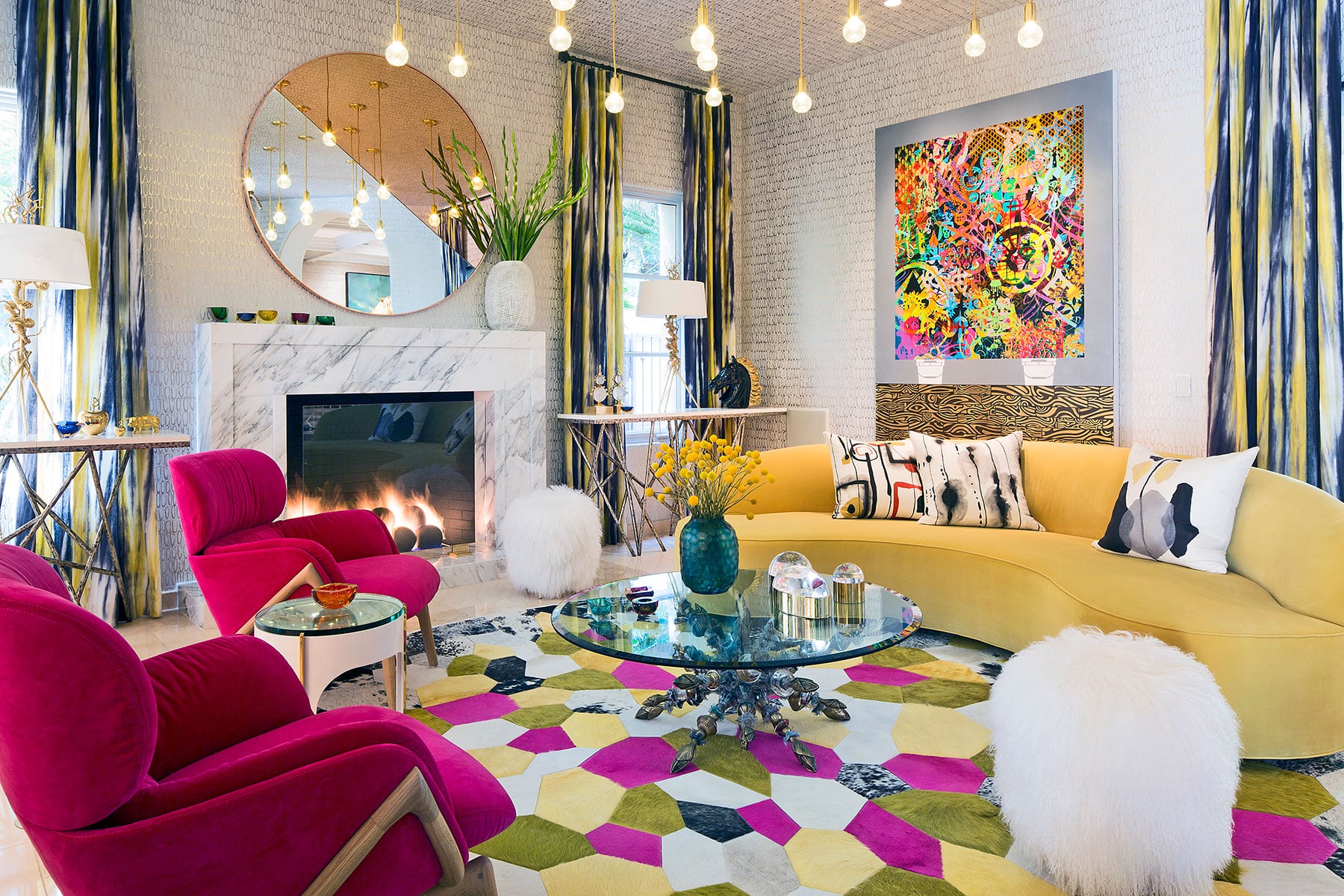 Actress Kaley Cuoco “asked for a home with vibrant energy,” Andrews writes, “something that captured her own voice.” One result is this vivid living room, inspired by the colors in a painting Andrews came across. Photo by Grey Crawford 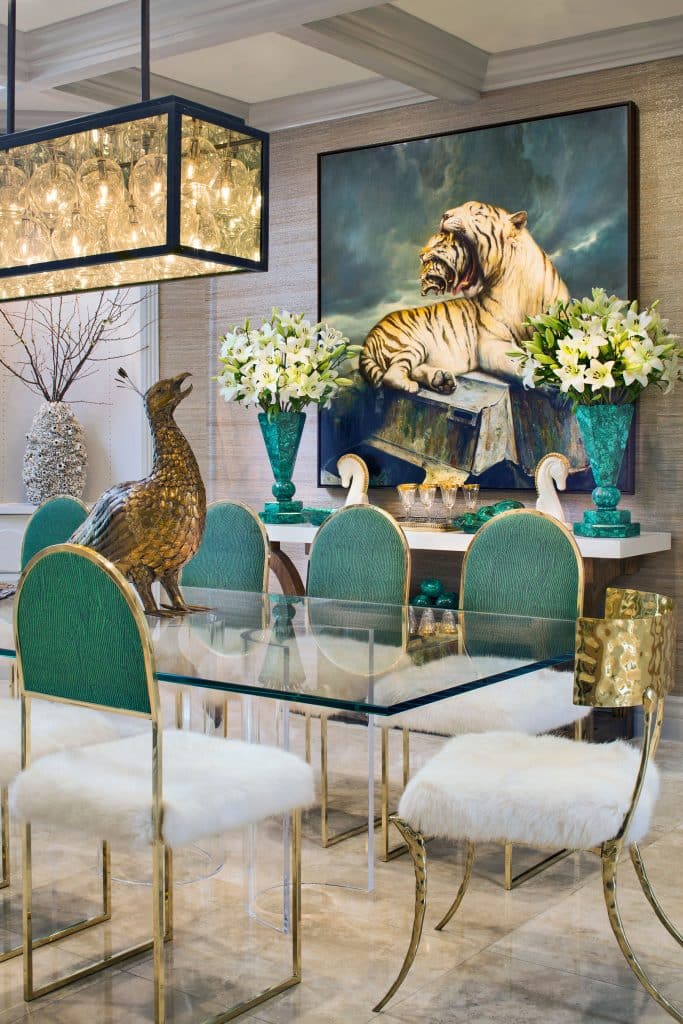 A large-scale painting of a tiger from Cuoco’s own collection provided the model for the dining room’s emerald and gold color palette. The glass-and-Lucite dining table is surrounded by klismos and brass chairs with faux-fur seats. The malachite accents are all vintage. Photo by Grey Crawford

Soon after he started working with Mondale, a wardrobe-stylist friend introduced hin to Ryan Seacrest, then at the height of his American Idol fame. Seacrest had just bought Casa di Pace (House of Peace), a famed Hollywood Hills Mediterranean-style villa whose previous owners included Kevin Costner and Richard Dreyfuss, among others, and hired Andrews to turn it into a resort-style hideaway that captured Tinseltown’s historic allure. The revamped home landed in Architectural Digest, establishing Andrews as a go-to designer for some of TV’s biggest stars, including Khloé and Kourtney Kardashian and their mother, Kris Jenner.

When actress Kaley Cuoco, of the Big Bang Theory, purchased Khloé’s home a few years after he designed it, she called on Andrews. “Kaley asked for a home with vibrant energy, something that captured her own style,” he says of the home’s 1970s-throwback modern-glam aesthetic. “Her personality is positive, genuine and happy, so I made a place that reflects that, using a profusion of color and elements of surprise.” His gleeful touches include the living room’s collection of LED pendants from Twentieth and a pair of hot-pink velvet chairs from The Future Perfect, as well as a color-rich geometric hide rug by Kyle Bunting and an artisan-wrought cocktail table made from bronze and recycled glass bottles. In the dining room, a rectilinear light fixture by John Pomp provides a glittering focal point above brass-and-fur klismos chairs from JF Chen, a golden peacock and vintage malachite accents, all found on 1stibs. The breakfast nook’s graphic black-and-white wallpaper featuring jockeys on horseback offers a whimsical spin on the animal prints of classic Hollywood style. 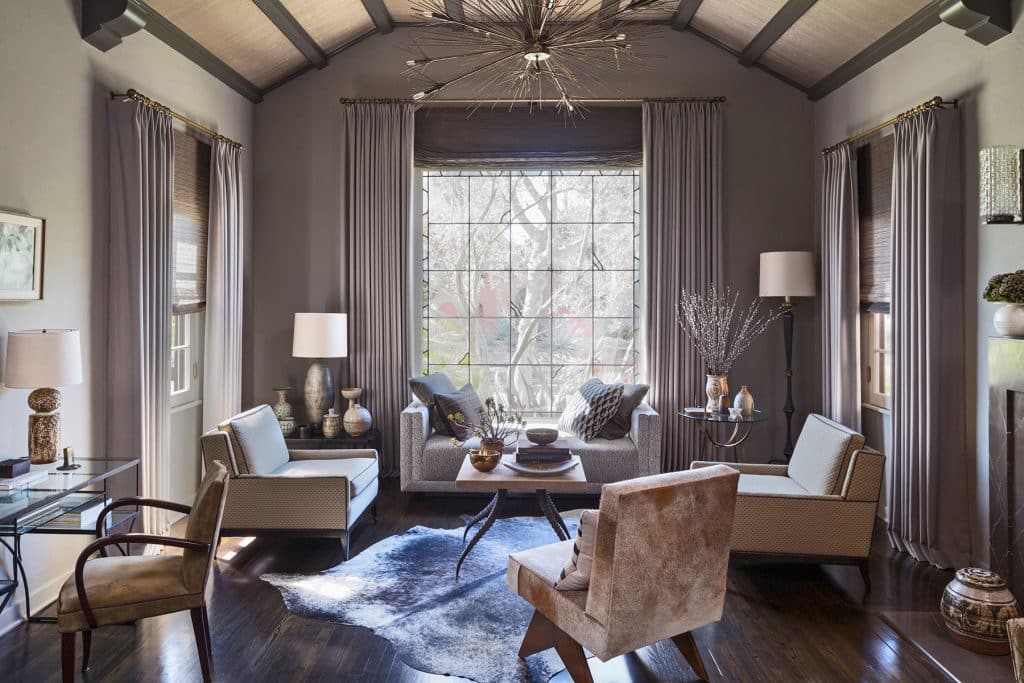 In his own home, a 1930s Spanish Colonial in Los Angeles’s Miracle Mile North neighborhood, Andrews opted for a monochromatic palette, from the grass cloth on the ceiling to the window treatments and neutral furnishings, playing up rich textures and their subtle, varying tones. Photo by Grey Crawford 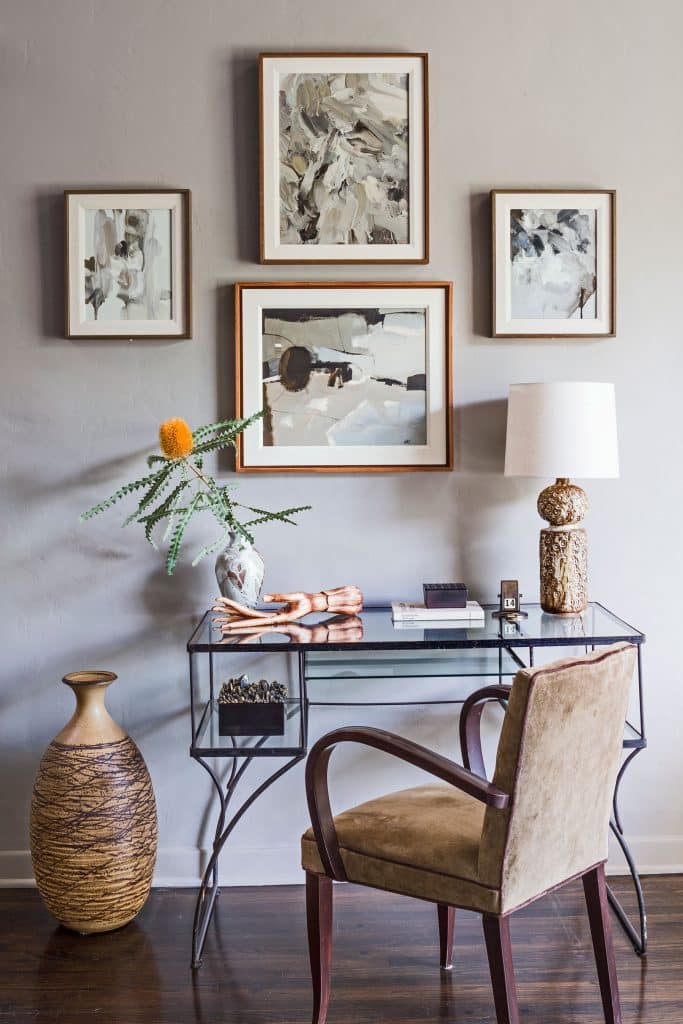 For Andrews, vignettes are essential, because, as he puts it in his new book, “there should be a beautiful little design story wherever you cast your eye.” In his own house, abstract paintings by the London artist Laura Lancaster hang above a desk that he bought many years ago at the Paris flea market. Photo by Grey Crawford

Andrews’s own home, in L.A.’s Miracle Mile neighborhood, reflects his performance background. “There’s a bit of choreography to my rooms in the way things are placed and how you move through them,” Andrews writes of the house, which he composed as if each space were a distinct stage set. The living room’s low-contrast palette of warm neutrals, for instance, which is reiterated in a large painting Andrews found on 1stdibs, conveys a sense of calm and restraint that contrasts with the vibrancy of the adjacent wood-paneled den’s furnishings and art, like the sofa Andrews had reupholstered in an Hermès fabric and the light fixture made of ceramic pieces that he designed in collaboration with local ceramist Heather Levine. That space, he writes, is “purposefully eclectic and funky.”

Andrews’s home is an expression of his evolution as a designer — it is here that his distinct blend of glamour and West Coast ease took shape and developed — as well as a laboratory for experimentation. “Nothing is super-permanent,” Andrews says of furnishings and accessories that include a Sputnik-style light fixture from Downtown and a long dining table from Blackman Cruz, along with abstract paintings by the London artist Laura Lancaster and contemporary pottery by L.A. ceramist Adam Silverman, another Andrews favorite. “I’ll buy something I think is beautiful, live with it for a bit, then sometimes it ends up with somebody else.

“The more that you trust yourself and trust the creative process, it can all keep evolving,” concludes Andrews. “If things ever get stale, something’s not working.” 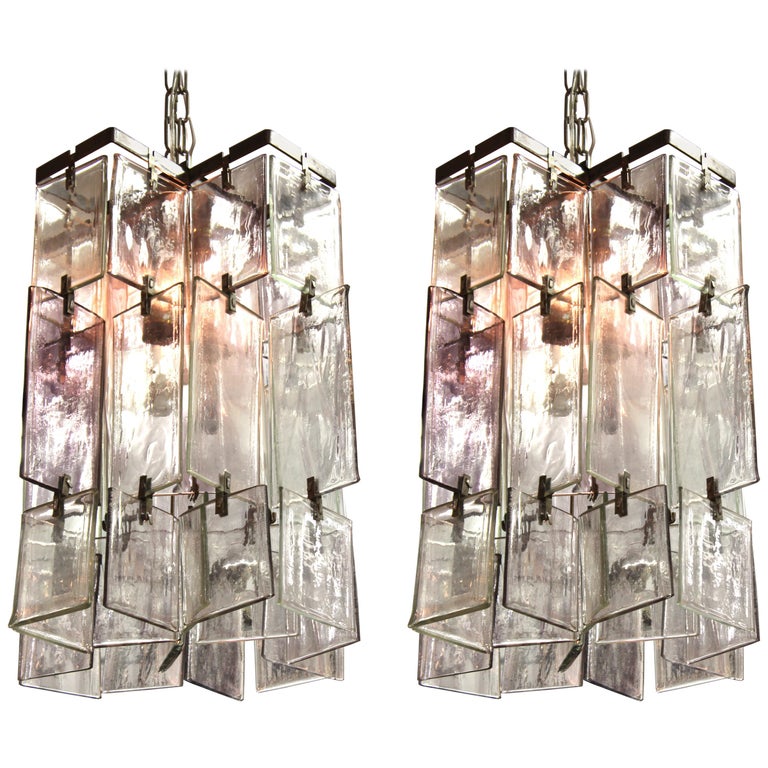 “I love elements of symmetry in a room, and these stunning mid-century light fixtures would do the trick. They would be perfect over a kitchen island or hanging above bedside tables.” 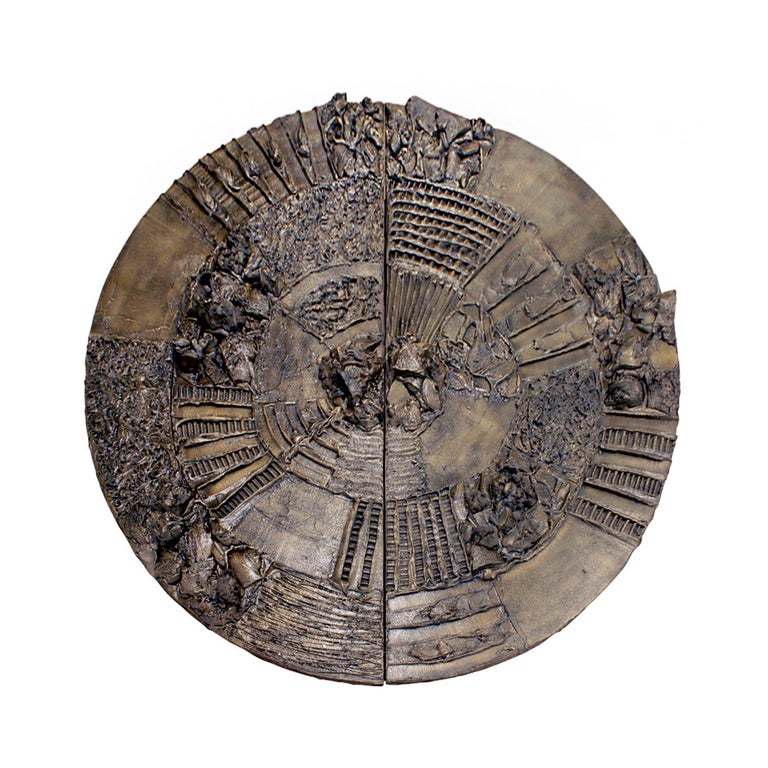 “This Paul Evans cabinet is a stunner! Both sculptural and usable, it is truly functional art.” 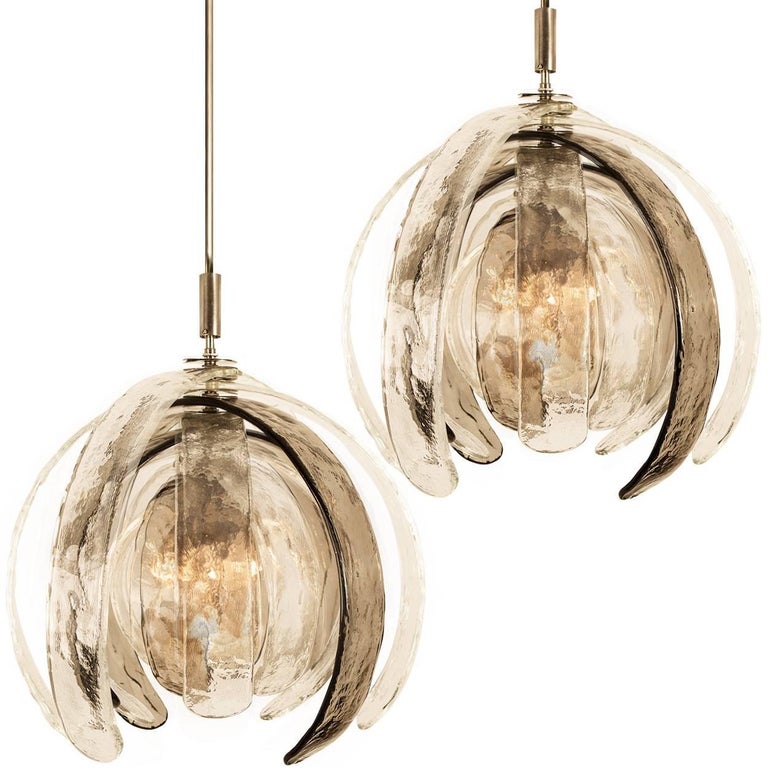 “I have a passion for Italian glass lighting. I would love to see these lights in a powder room, in staggered heights, on one side of the vanity area.” 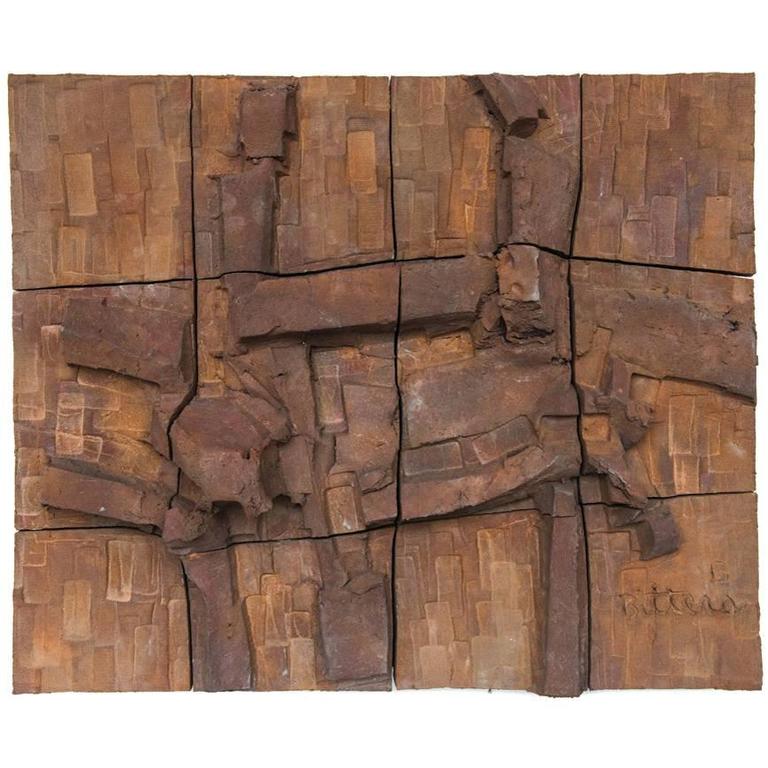 “Stan Bitters pieces are a slice of history. This sculpture is beautifully textured and can add visual interest in a masculine interior.” 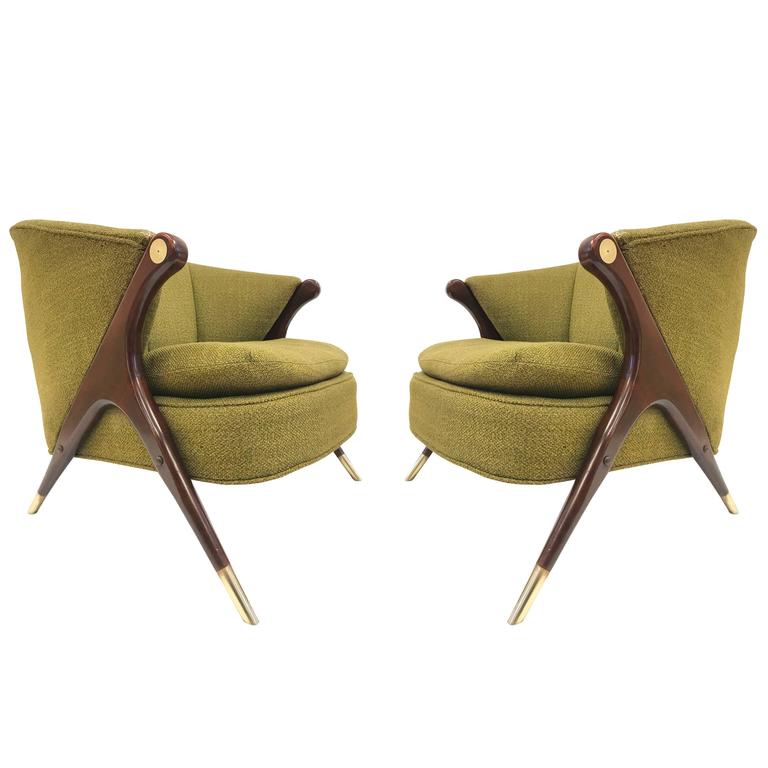 “I am drawn to the simple lines of these chairs. I would recover them in a hand-painted print fabric and use them in a bedroom sitting area with a simple side table.” 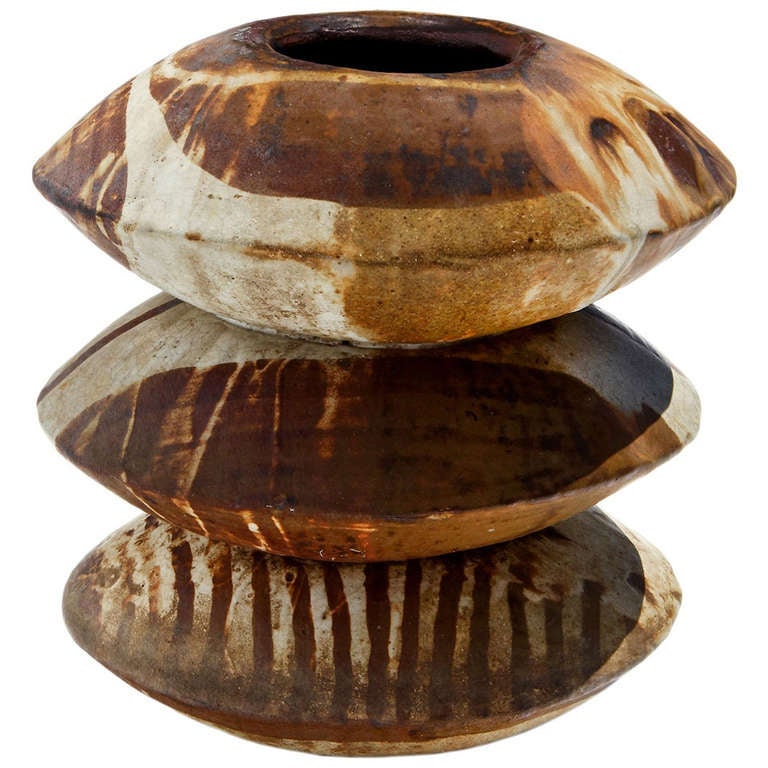 “I love this piece because the shape and glazing are classic. This is the kind of piece you could use as inspiration for an entire room.” 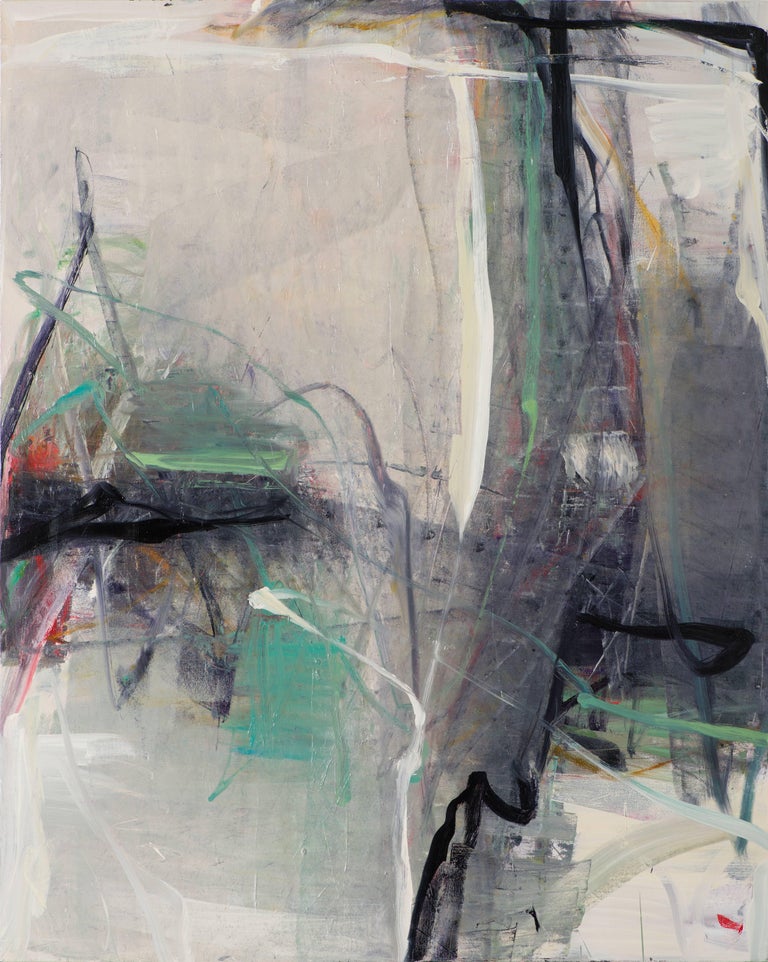 “This is such a beautiful contemporary abstract painting. I am drawn to the gorgeous colors, and while it is subtle, the piece is still quite strong.” 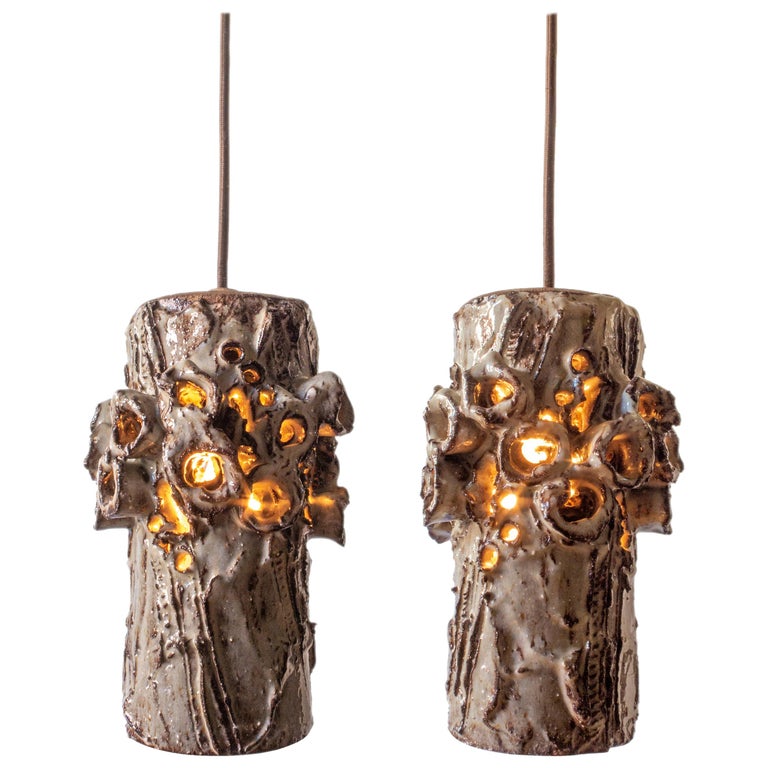 “I’m always drawn to anything ceramic because each piece is unique. These small pendants would be perfect over a small bar — perhaps in my own home!”