A Manhattan Designer Curates a Room of Her Own 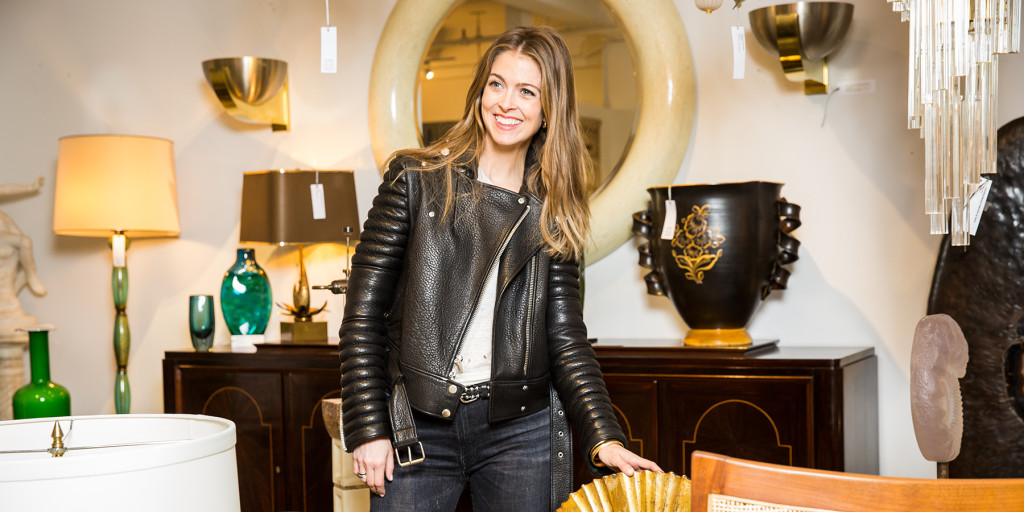 We challenged Jennifer Vaughn Miller to quickly transform a bare space into one of her lively interiors using furnishings found in the 1stdibs Gallery at the NYDC. Here’s how she did it. 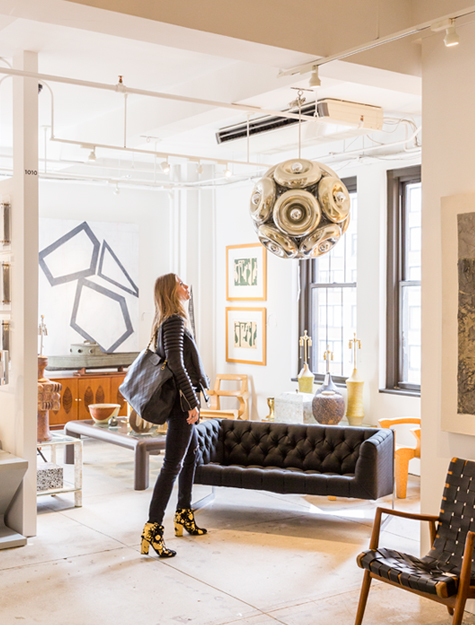 March 21, 2016New York designer Jennifer Vaughn Miller took up our challenge to turn 200 square feet of naked space into one of her thoughtfully curated interiors using furnishings found in the 1stdibs Gallery, at the NYDC. The striking result is on view through April. Of this orb chandelier from David Bell, which ultimately found its way into her “room,” Vaughn Miller says, “it reminds me of a disco ball.”

What does one do with 200 square feet of naked space?

If it’s opposite the reception desk at the 1stdibs Gallery, on the 10th floor of the New York Design Center — where 54 of the site’s more than 2,000 dealers maintain well-appointed booths stocked with vintage furnishings — and if you’re Jennifer Vaughn Miller, a young Manhattan designer known for crafting luxe interiors, you start by painting the backdrop wall a robust gray tinged with purple.

We recently challenged Vaughn Miller, one of 1stdibs’ most active shoppers on the site and in the showroom, to curate an atmospheric room from scratch in a space 25 feet wide and 5 feet deep, plus a nearby corner, and share some trade secrets in the process. The arresting results are on view through the end of April.

Here’s how she did it.

First, “I pictured a home office for myself, with a big desk to spread pictures out on, a sofa to lie on while I leaf through magazines and plenty of chairs. I like to move around when I work — it keeps my eyes from crossing,” says Vaughn Miller, whose preferred work uniform is skinny jeans, white T-shirt and leather jacket.

Before heading out to the 33,000-square-foot 1stdibs Gallery, at 200 Lexington Avenue — open five days a week to the trade and civilians alike — Vaughn Miller went to 1stdibs.com and narrowed her search to pieces available at the NYDC. “I combed through sixty-three pages on the website to pinpoint the direction I was headed and saved in my ‘Favorites’ every piece that spoke to me,” she says. 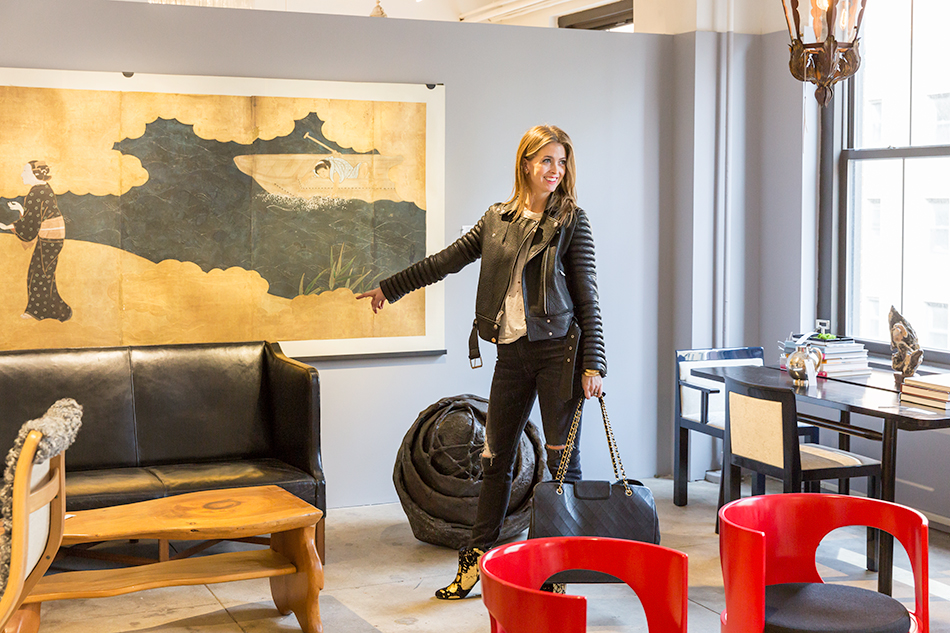 “I like to move around when I work — it keeps my eyes from crossing,” jokes Vaughn Miller, seen here in the booth of Lawton Mull, which features a pair of Arne Jacobsen’s red-lacquered Pre Pop chairs, a 19th-century Japanese screen and a black leather sofa by Kaare Klint. 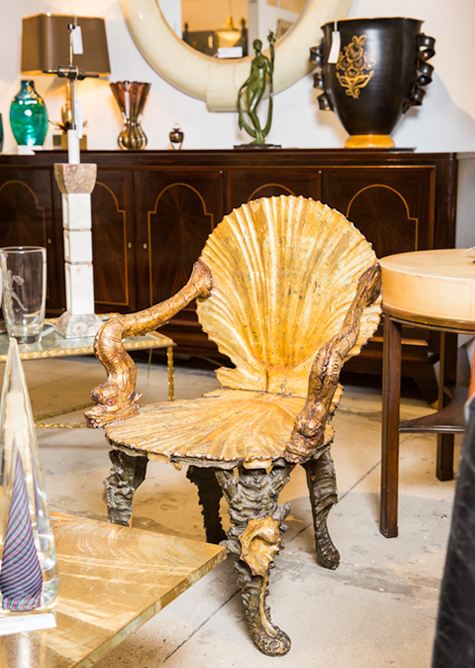 Vaughn Miller says this ca. 1850 armchair caught her eye in Milord‘s booth because of its “glitzy whimsy.”

A long-limbed beauty, Vaughn Miller graduated from the University of Texas with an architecture degree in 2002 and set out for New York. “I never looked back,” she says. But she did switch to interior design, for fear of being isolated behind a computer as an architect. She opened her own high-end interior design business, Vaughn Miller Studio, in 2009, and has since made a name for herself with such projects as an antiques-filled colonial in Amagansett, on New York’s Long Island, and a minimalist Lake Austin compound in her home state.

Having done her research, Vaughn Miller made the short hop to 200 Lex from the Upper East Side apartment she shares with her husband, Derrick Miller, cofounder of Miller’s Oath, a purveyor of men’s bespoke fashion, and their four-year-old daughter, Tallulah. “I wander around, looking for what jumps out at me, always working to achieve an interesting juxtaposition,” she says of her process. She eyeballed the scale of pieces she had noted online, considering how they would work in the space and play off one another.

Vaughn Miller’s particular alchemy involves a delicate balance of qualities, textures and materials. “I combine light and dark, smooth and rough, serene and busy, and I always appreciate dark or mysterious undercurrents. Contemporary furniture showrooms, no matter how beautiful, can oftentimes be a bit sterile,” she observes. “I use antique and vintage pieces with character and hidden layers ninety percent of the time, and that’s why I love 1stdibs so much.” 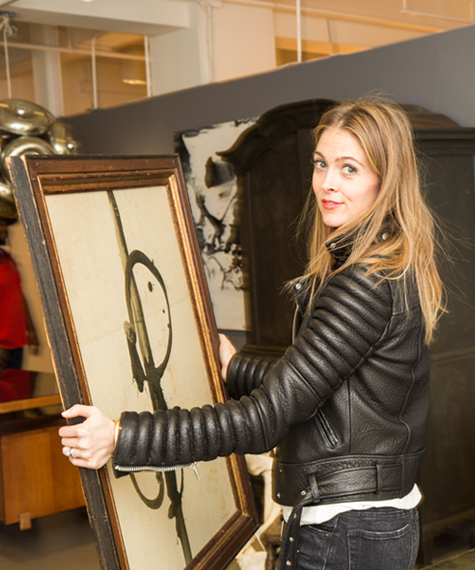 Mixing styles and periods with confident abandon, Vaughn Miller zeroed in on an 18th-century Swedish Rococo cabinet, from Liza Laserow, to act as a centerpiece on the long wall of her display space. “I fell passionately in love with it at first sight. It’s massive and a focal point, and helps divide a long narrow space successfully in two.”

To one side of the cabinet, she placed a black leather sofa designed by Kaare Klint in 1930 for the office of the Danish prime minister and found in Lawton Mull’s booth; a 20th-century French forged-iron coffee table, from Fleur, chosen for the sparkling quality of its distressed mirror top; and a rather unexpected three-and-a-half-foot-tall pinecone-studded Victorian urn, from Randall Tysinger.

At the other end of the space, the black opaline glass top of a 1950s pear-wood desk by Jacques Adnet, from Atomic Antiques, reflects a spherical 1970s Italian chrome chandelier, from David Bell, suspended just above. “It reminds me of a disco ball,” Vaughn Miller says of the hanging light fixture. (Atop the desk sits an industrial table lamp, from Metropolis Modern.) The high-gloss, Rorschach-blot shapes on a pair of contemporary abstract paintings by William Kozar, found at Area ID, provide “relief from the darker pieces,” she explains. She often uses abstract art in the homes and commercial spaces she designs for clients in New York, Texas, California and elsewhere. “I find it’s something you don’t tire of easily.”

Watch Vaughn Miller transform a bare space into one of her lively interiors at the 1stdibs Gallery in the NYDC. 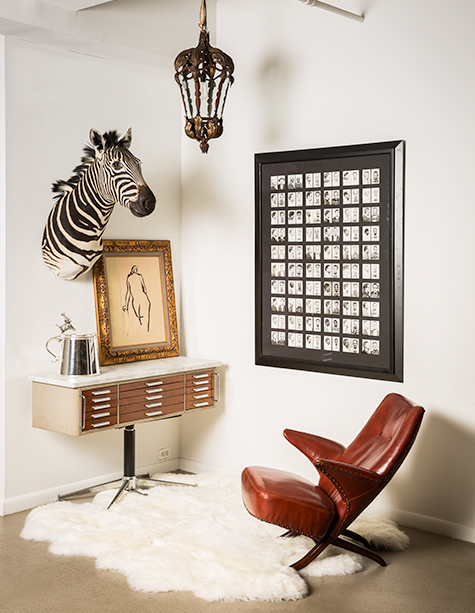 A taxidermied zebra head presides over a corner across from Vaughn Miller’s primary space. An iron lantern from Lawton Mull is suspended above.

Vaughn Miller’s wide-ranging chair choices included one made of cow bones, from Darrell Dean — “It’s a bit macabre,” she admits — and a circa-1850 armchair with a scallop-shell back, from Montreal’s Milord, which she chose for its “glitzy whimsy.”

In the corner annexed to the long display space, where the background remains white, Vaughn Miller included a 1960s marble-topped French dental cabinet, from Gustavo Olivieri (she was drawn to the pattern created by its 15 small drawers); a 1957 Dutch Penguin chair with studded leather upholstery, an impressive 1970s Gucci ice bucket, from Solo Modern; a taxidermied zebra head, from Area ID; and a framed assortment of black-and-white mug shots from the 1950s, also from Olivieri. Suspended above it all is a late-19th-century hand-forged iron lantern, from Lawton Mull.

Having gathered this array of material, Vaughn Miller proceeded to arrange and rearrange, angling chairs this way and that, until she was satisfied with the result. Her final move was seeking out a 1970s Lucite pedestal, from Full Circle Modern, on which to place a circa-1900 limestone bust of a young boy, from Elizabeth Pash Antiques.

Thanks to Vaughn Miller’s online prep work, the whole tableau came together in just a few hours. “It was fun being my own client — and with no budget!” she says. “That was a thrill.” 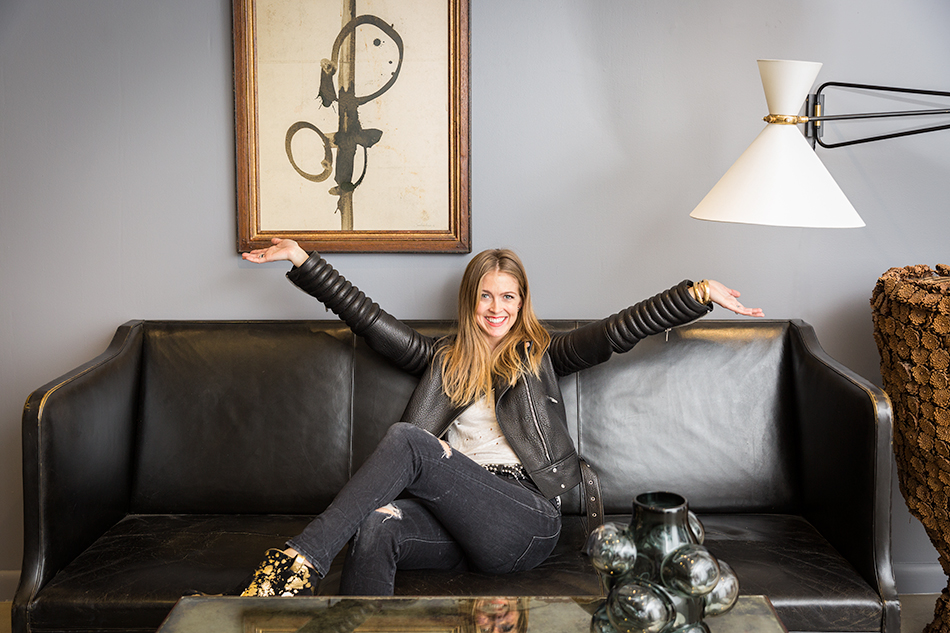 “It was fun being my own client — and with no budget!” Vaughn Miller says of the experience. 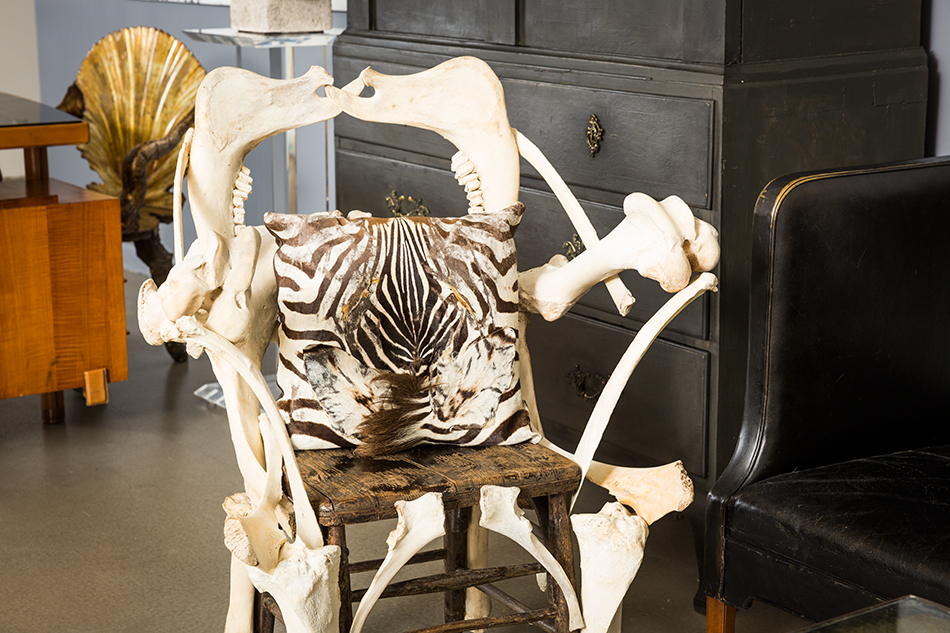 A chair made of cow bones, from Darrel Dean, adds an off-kilter vibe to the eclectic space. 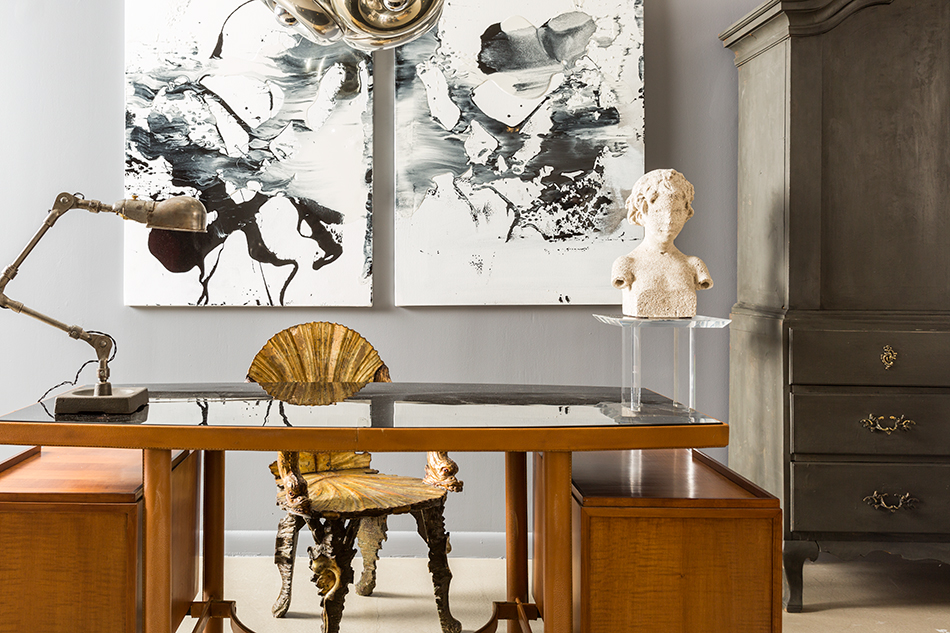 The finished product confidently mixes styles and periods. Pictured here are the 1950s pear-wood desk by Jacques Adnet, from Atomic Antiques, on top of which sits a ca. 1940 Fostoria industrial lamp, from Metropolis Modern; the ca. 1850 armchair; the pair of abstract contemporary paintings by William Kozar, from Area ID; the 1970s Lucite pedestal, from Full Circle Modern, on which rests the ca. 1900 limestone bust, from Elizabeth Pash; and the Swedish Rococo cabinet, from Liza Laserow. 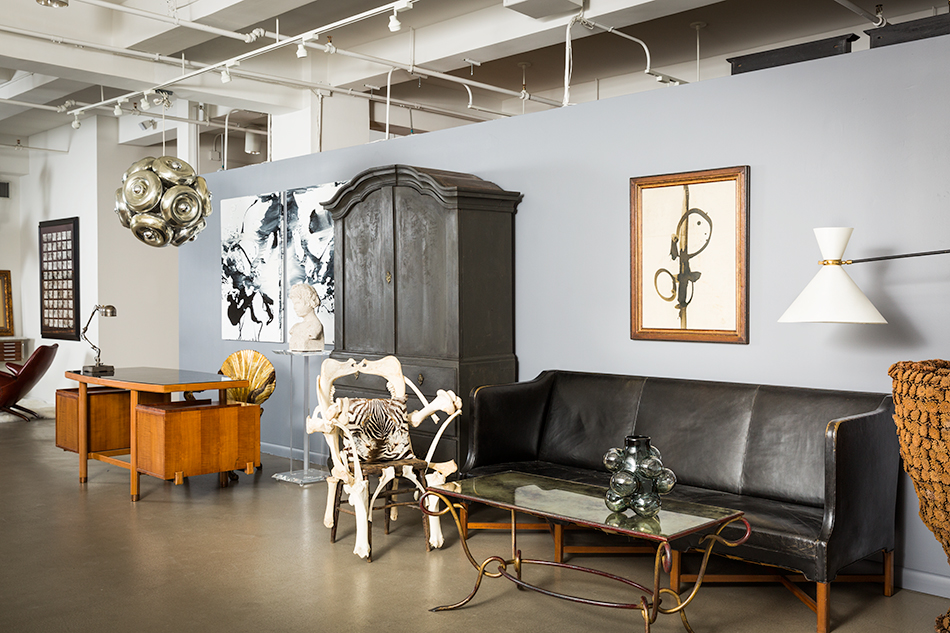 The color scheme of light wood, ivory and charcoal complements the gray backdrop. To the right of the cabinet are the bone chair; the Klint leather sofa, above which hangs the Louis painting, from Etós; the French forged-iron coffee table, from Fleur; and the Victorian pinecone-studded urn, from Randall Tysinger.

Visit the 1stdibs Gallery at the NYDC