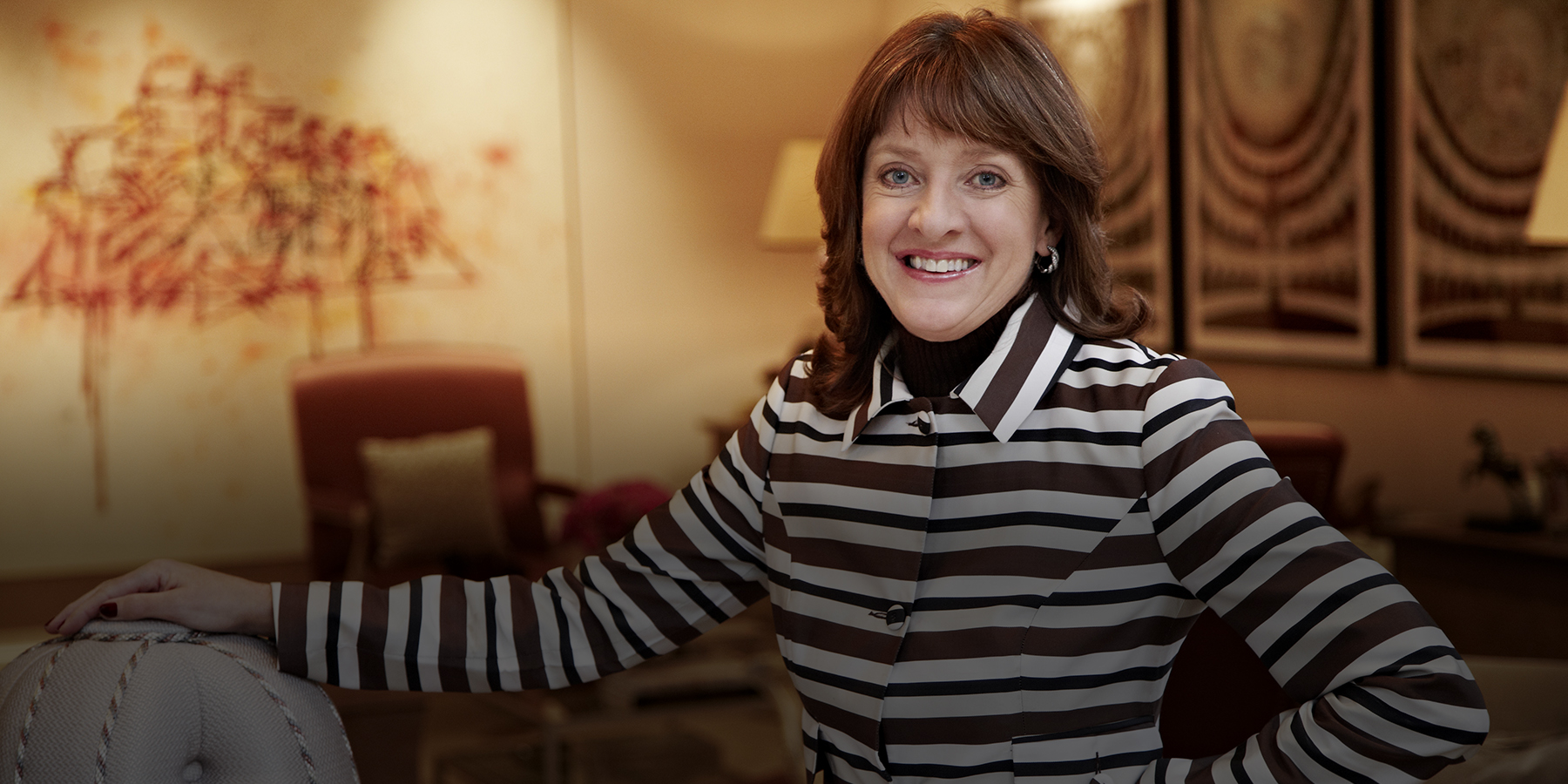 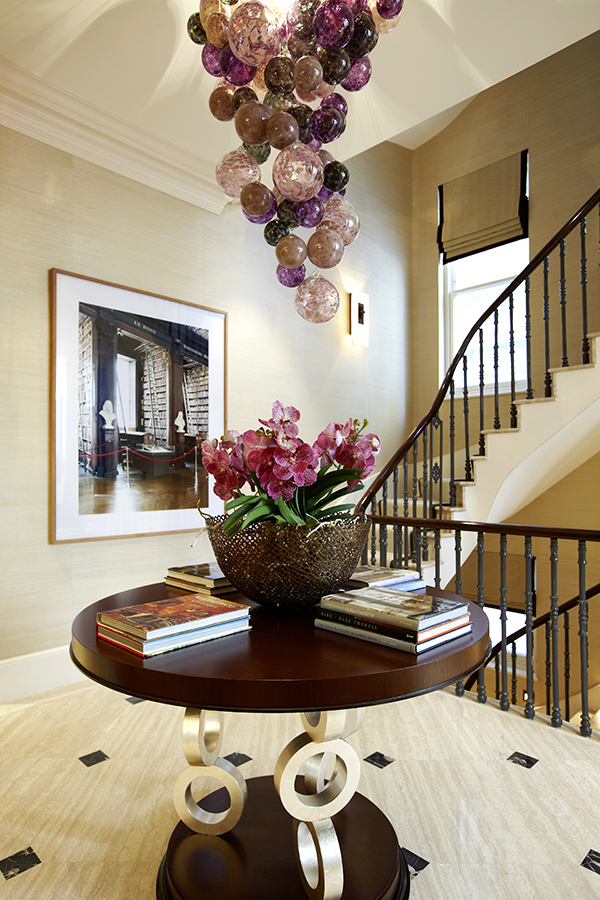 The entryway of a townhouse in Kensington designed by the London-based decorating entrepreneur Joanna Wood. Top: In addition to creating modern-classic  interiors around the world, Wood runs an eponymous shop on Pimlico Road and designs fabrics, wallpapers, furniture and lighting through a trio of beloved product lines. All photos courtesy of Joanna Wood

One of Joanna Wood’s most vivid memories of her London childhood is of going with her mother to choose wallpaper for her bedroom when she was about eight years old: “There was a shop called Home Hire Decorating on Walton Street in Chelsea, and I absolutely loved it,” she recalls. “I can still remember the crack of the pages as you turned the pattern books — and the smell of the paper. I was always the child who wanted to change my room around when everyone else was out making mud pies. The space that I lived in was important to me from a very young age.”

Chelsea is still her London village, and it is here on the Pimlico Road — now a smart destination for those searching out the best in design, decoration and antiques — that her interiors studio, Joanna Trading, and eponymous shop are located. Here, too, is where she lives during the week, heading down to her rural retreat in Wiltshire every weekend. A smiling brunette whose personal style is as quietly elegant and classic as her interiors, Woods is charming and chatty but also a powerhouse when it comes to business. As well as the studio and shop, she co-runs three other sizeable ventures: Lewis & Wood (fabrics and wallpapers), Phillips & Wood (lighting) and Lawson Wood (upholstered furniture).

After leaving school at 18, she worked first for a real estate company, which specialized in the stately properties situated around Kensington and Holland Park. Inspired by the interiors she saw, she then became assistant to Alannah Dowling, the in-house interior designer at the luxury store Asprey, continuing in that role when her boss set up her own company. She credits Dowling with engendering a fascination in her not only for decoration but for the internal workings of a house. “That was thirty years ago, and in those days interior designers rarely troubled themselves with plumbing, wiring, radiators and so forth,” she explains. “But through Alannah, I learned a lot about space, construction and the core practicalities.”

Wood launched her own interior design business when just 24, after she was offered the chance to decorate a mews house for a friend. By then, it was the early 1980s, and the London property market was going into overdrive. “I hit exactly the right moment,” she says modestly. “It was like pushing a snowball off a mountain and watching it gather speed and mass.” She had married her first husband, a property developer, two years earlier and at one point was overseeing the refurbishment of 132 apartments. She had also cleverly found an aesthetic niche to call her own: “Back then, there was a lot of orange pine around, courtesy of the Habitat influence, and at the other extreme, it was bullion fringe with everything. There was very little in the middle.” Wood saw the potential in filling that gap and tapped into an emerging market that was more focused on creating an entire lifestyle — a new concept 30 years ago — than on mere decoration. 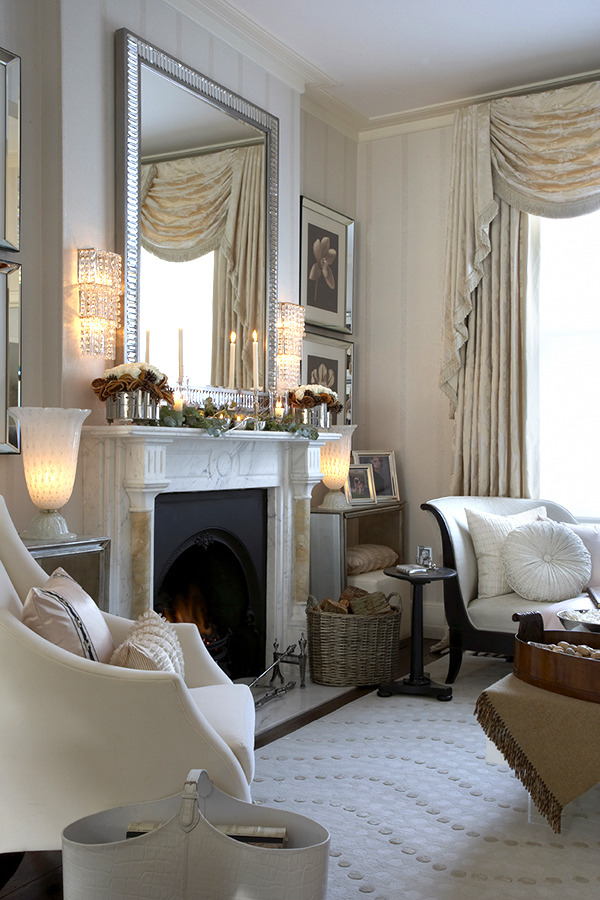 A serene corner of the living room in a house Wood decorated in Maida Vale, a neighborhood in West London.

Instead of going overtly modern or traditional, she focused instead on evolving a style that had contemporary elements, but was still extremely comfortable and practical. She says she took the American model of coordinating an entire look. “We could do a flat for you that would be fully dressed right down to the Champagne on the sideboard,” she says. “This was pioneering in Britain, and we were the first to do it here.”

Today, lifestyle is still at the heart of her business. Wood has chosen to stay where she began, the high end of the residential market, which has bucked economic woes by remaining resolutely strong, particularly in London. (She does, of course, work all over the world, too.) Her clients do not come to her for a signature look, but for her ability to translate their own personalities and the way they live into their interiors.

“I get a buzz from giving somebody the home that most reflects them, rather than a house style,” she says. “Right now I am overseeing a huge restoration on Carlton House Terrace [next to Buckingham Palace], as well as an apartment on New York’s Park Avenue, a country pile in Suffolk and a penthouse in Knightsbridge, to name a few. I could be worrying about re-creating an Owen Jones florette one moment and designing a truly contemporary piece of furniture the next. It is that huge variety that keeps me alive and interested.”

Her list of past projects is no less impressively diverse and elite. It includes the renovation of a Christopher Wren pavilion at Hampton Court Palace, a triplex penthouse in London (then the largest built), a thatched folly on a lake in Gloucestershire, a castle in Spain, a house in the Hamptons, the interior of a private jet —and even a horse trailer. The commercial arm of her business has undertaken the historic renovation of the legendary Garrick Club in London, the very English Duke’s Hotel in St James’s and apartments for foreign correspondents of the New York Times through her connection with the paper’s former publisher, Arthur Ochs Sulzberger, for whom she refurbished various residences in the high-English style. 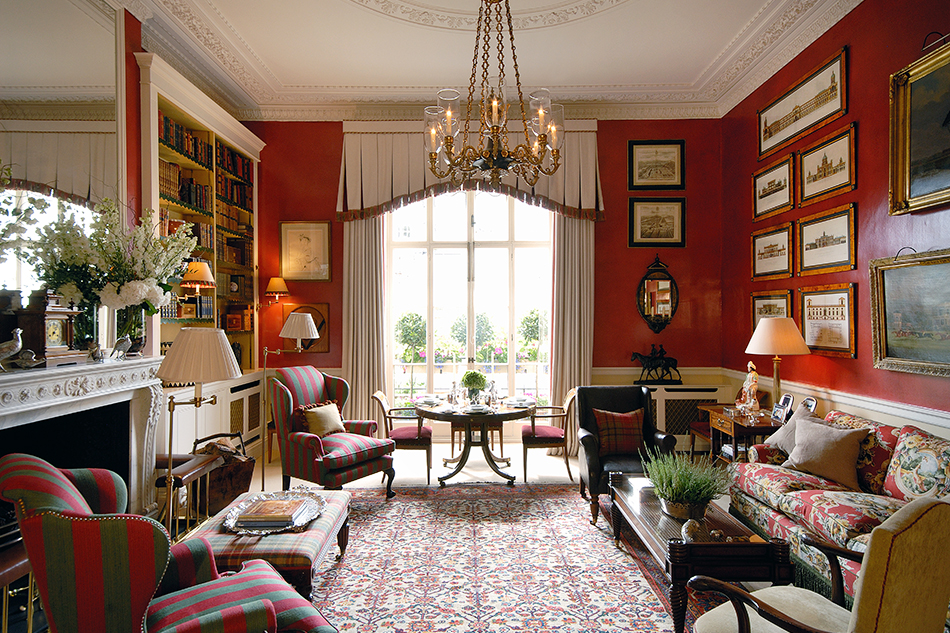 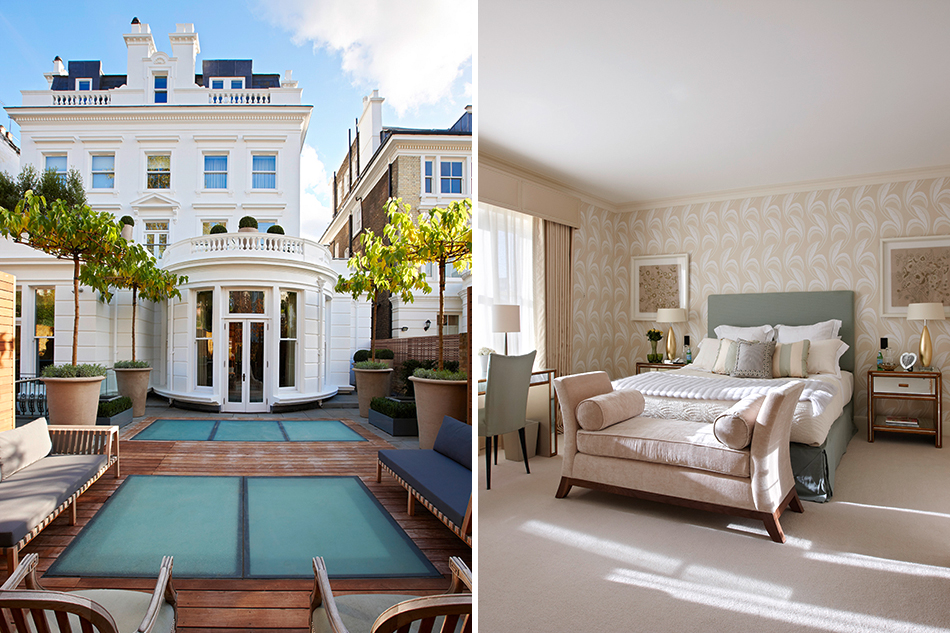 Left: The seeming blue-green rugs in the outdoor seating area of the Kensington townhouse are actually translucent panels, which provide essential light for the basement below. Right: A cream-and-aqua guest room in the same home. 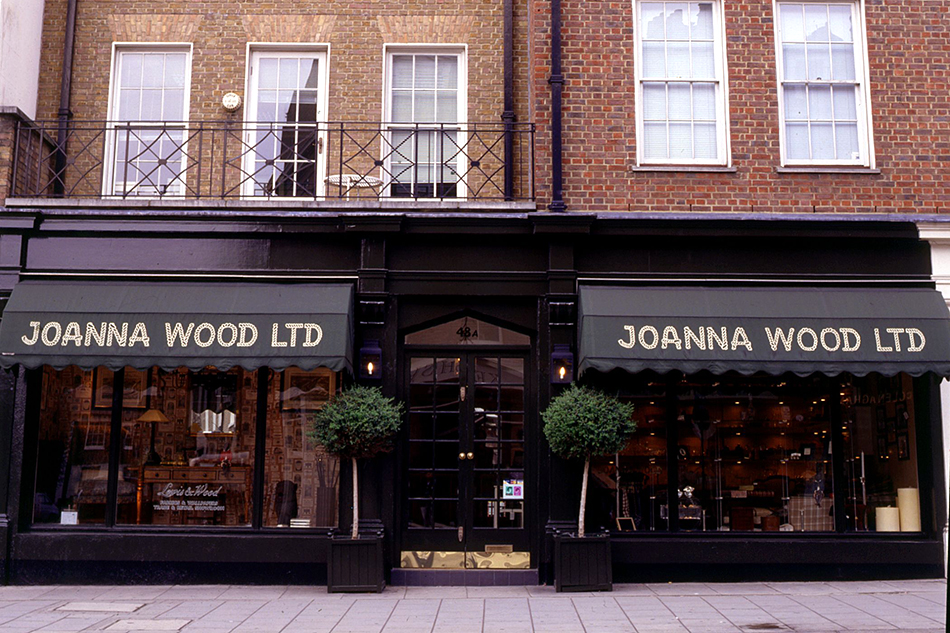 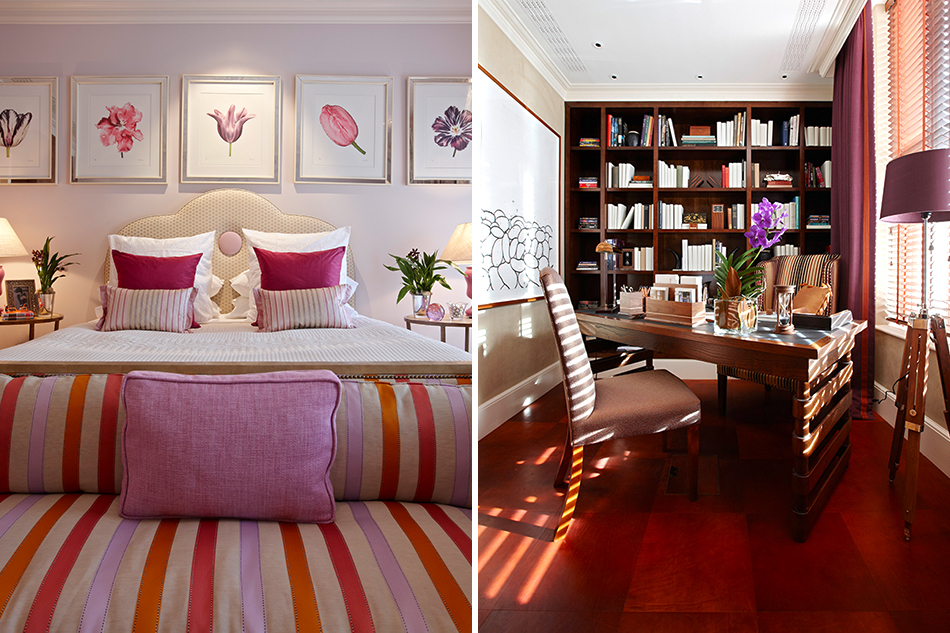 Left: Wood reveals her feminine side with pink and coral flowers and stripes in this pretty bedroom. Right: A study gets a more masculine look, with bespoke shelving, a leather floor and a tripod-based lamp. 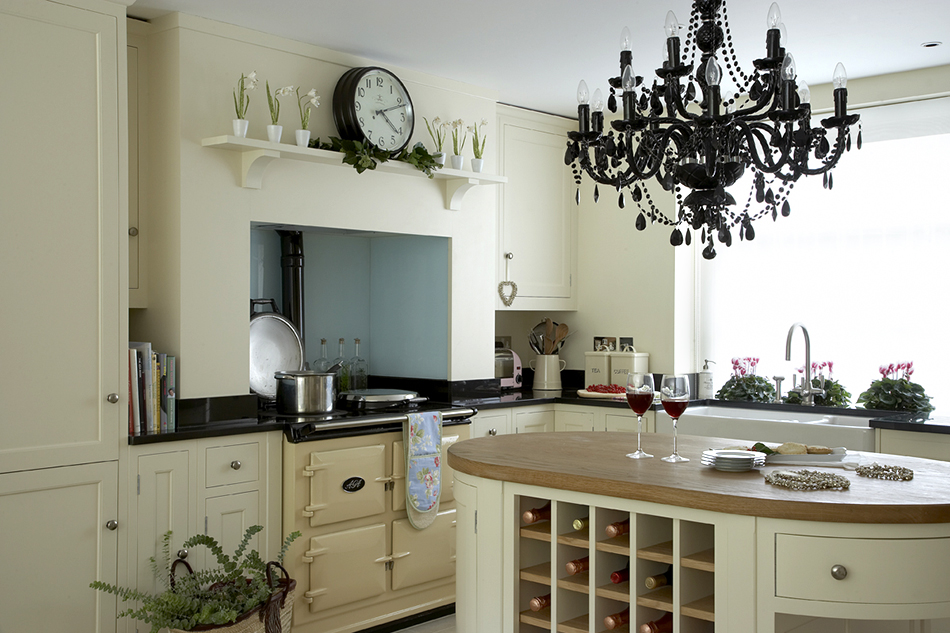 At the Maida Vale residence, an ivory-hued kitchen strikes surprising notes with a black chandelier over the island and a pop of robin’s-egg blue behind the stove. 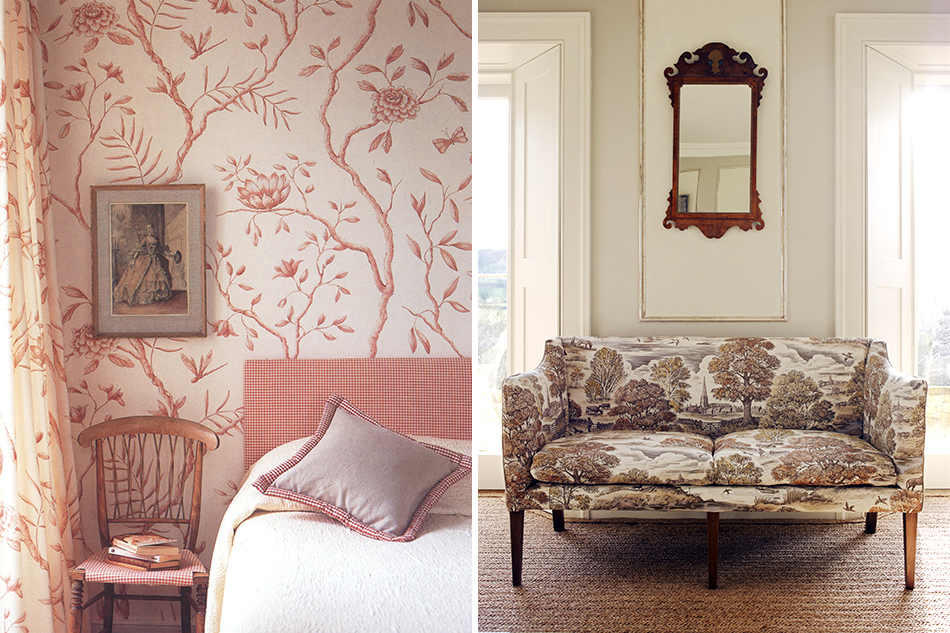 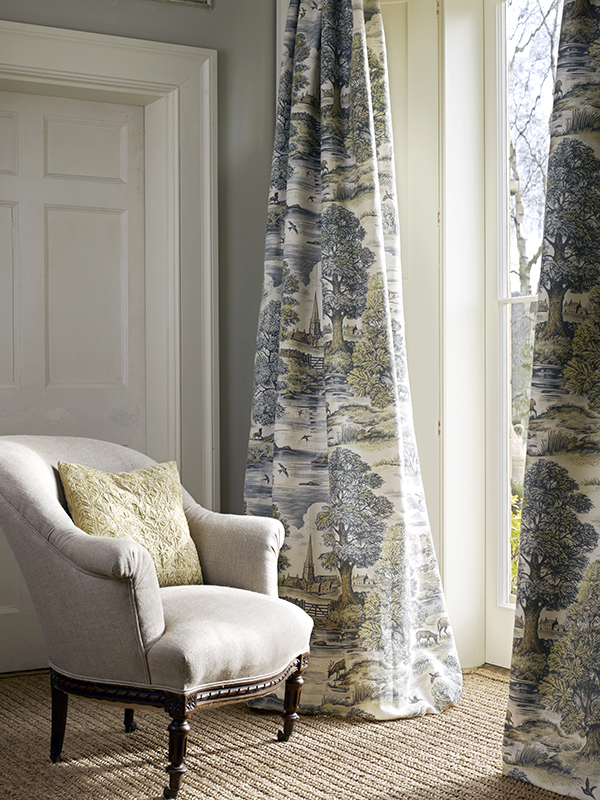 Another use of Lewis & Wood’s Royal Oak pattern, this time as dramatic, floor-skirting curtains.

Today, her studio’s headcount numbers about 20 in total, with freelancers brought in when needed, mainly former senior designers who have left to have children — “Nobody is ever really allowed to leave,” she says playfully. Many clients can’t stay away either, returning to her time and again as they add to their property portfolios, and she now finds herself working for their children too. “I like to think that people come to us for comfort and practicality, as well as beauty and lifestyle,” she says. “I also very much understand that doing up a house should be an entertainment and a pleasure, not a worry and a drag. I want my clients to enjoy the whole journey and the final performance.”

Her truly international clientele reflects the diverse cultural mix of London as much as the global reach and reputation of her own projects. The US is an especially important market for her, not just for interior design, but for her subsidiary companies, too, in particular the Lewis & Wood line of fabrics and wallpapers. Co-founded with textile printer Stephen Lewis about 20 years ago, it is another example of Wood seeing a gap that could be filled: “Our designs are very English and artisan, not at all bling,” she says. “They include a lot of character prints — hunting, shooting, fishing, golf, maritime, and so on — that people often use in guest loos, boot rooms and lobbies. We like those spaces that other people ignore.” There are now about 175 fabrics and 70 wallpapers in the Lewis & Wood portfolio, with a particular big seller being the wide-width wallpapers of 132 centimeters. Fabrics are mainly natural, including corduroys, velvets, linens, merino wools and linen taffetas.

Seven years ago, Wood launched Phillips & Wood with decorative antiques specialist John Phillips. As well as its own collections of largely classical lanterns, wall sconces, ceiling lights and lamps, the company has built up a very successful bespoke business. Often approached by architects and interior designers to replicate antique or vintage designs, it also makes commissioned contemporary pieces, including bold interpretations of the traditional chandelier. Because these custom items are made by hand in London workshops, the range of commissions has increased and its ware diversified as designers have come to realize the extent of the skill base available: recent projects have included not just lighting, but furniture, mirrors and site-specific artworks. It has weathered the recession surprisingly well. 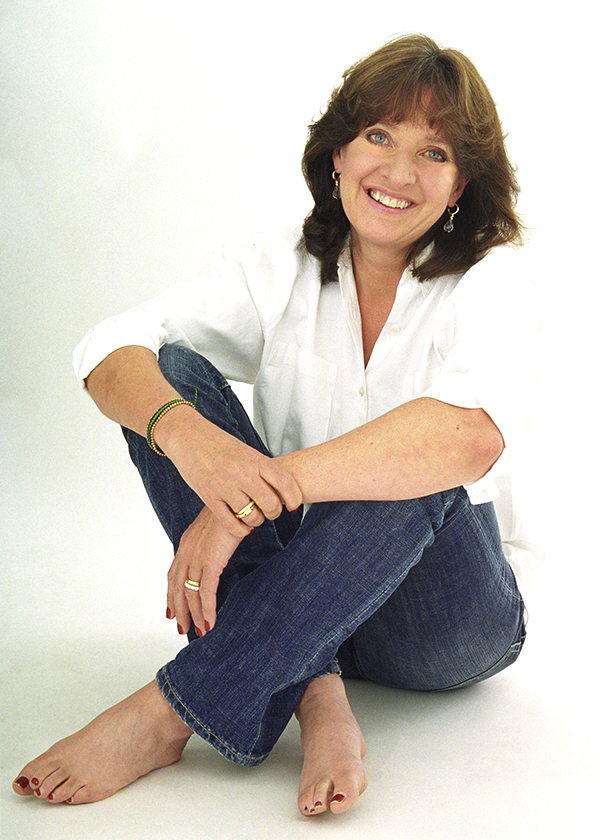 She may be a design magnate, but Joanna Wood confesses, “I can turn into a country mother with hay in my hair very quickly.”

Wood is confident that Lawson Wood, her custom-built upholstered furniture business, will do as well. Although her involvement spans 15 years, it is only recently that she has taken full control, and it is obvious that she is relishing the challenge of moving it forward: “I like to make the bottom line and achieve targets,” she says. “After all, you can’t do the fun things as a designer unless the figures are right.”

Of all her businesses, it is the shop that takes the least of her time — “about ten percent,” she estimates — a tribute both to the staff that run it and to her own multi-tasking abilities. The stock is eclectic but home focused: textiles, tableware, lamps, soft furnishings, quirky accessories and a great assortment of gifts. Wood likes to stock things that are not likely to be seen elsewhere (hand-stitched feather placemats, say, or a heart-shaped toast rack) and is always on the lookout when traveling. “The shop is very personal to me,” she says, “but then it is my name over the door.”

Considering the demands on her energy and time, she is surprisingly grounded. When she goes down to her country house on a Friday evening with her second husband, Charles Hansard, a company director, it is a house rule that she doesn’t bring work with her. A mother of two daughters – Leonora, who is in her 20s, and 14-year-old Harriet – she is most likely to be found early on a Saturday morning with a brush in her hand, helping her youngest groom the family’s ponies. “I can turn into a country mother with hay in my hair very quickly,” she says, “but then I value my private and family space above all. And I know my clients feel the same.”