How Jonathan Adler Spun a Design Empire from His Pottery Wheel 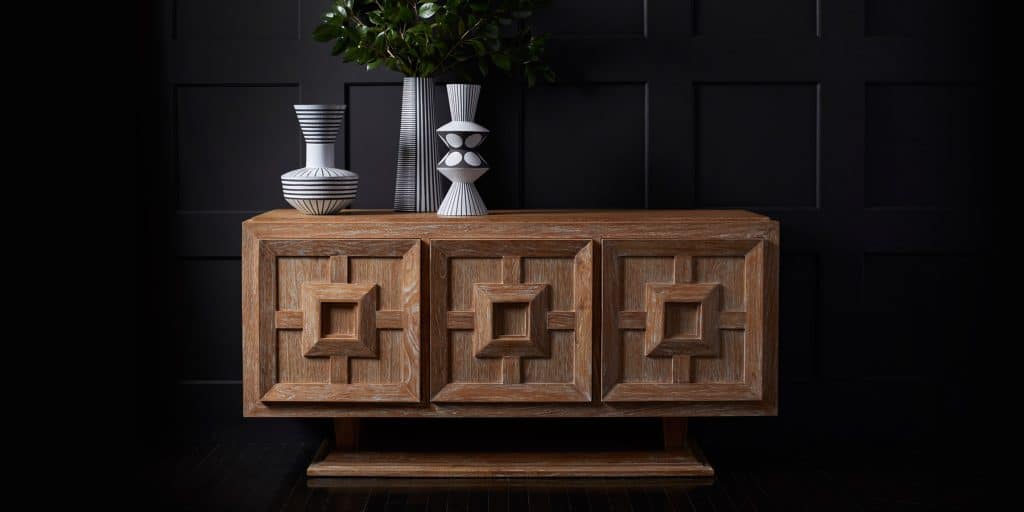 The self-described "terrible employee" has managed to build a thriving business creating everything from objets to interiors. 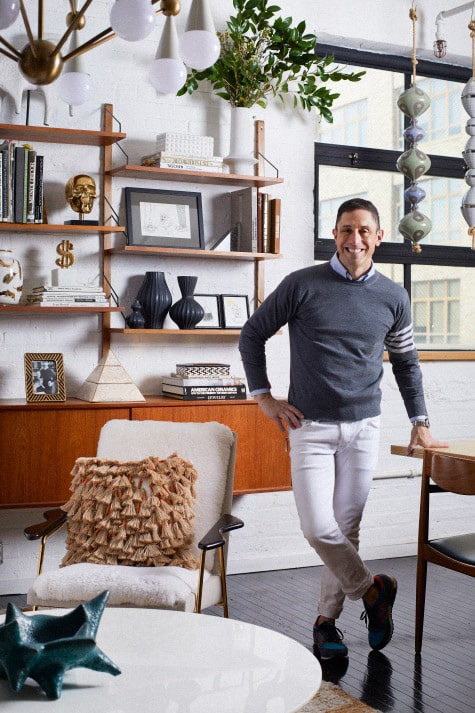 December 4, 2017Jonathan Adler stands in his Soho office next to his shearling and brass Ingmar lounge chair with walnut arms and a jute-tasseled Topanga pillow. Top: The limed Antwerp credenza is topped with pieces from his Palm Springs stoneware line: Diamonds, Tapered and Bow Tie vases. Still life styling throughout by Marcella Iulo

Jonathan Adler, the potter-turned-home-design guru, is giving a rapid-fire tour of his Soho offices on a sunny fall morning. There are long communal desks, where much of the staff sits at computers, and a photo studio for shooting new products: a marble tic-tac-toe game, coasters with images of women’s legs, a brass box stamped Amb 10, presumably intended for a bedside stash of the sleeping pill Ambien. He moves quickly through the rooms until he reaches one full of all manner of clay models — vases, animal horns, birds’ talons, canisters with faces inspired by rap icons and dollar-sign lids — and a single pottery wheel. Here, Adler slows down, seeming to center himself amid the kiln-fired pieces. “The heart and soul of everything is here,” he says, “my pottery studio.”

Although his namesake company has expanded into a mini empire touching just about every aspect of modern living — chairs and ice buckets, wallpaper and menorahs, chandeliers and rugs — made in myriad materials, Adler still creates almost every object in clay first. His guiding principle is a simple one: “I make the stuff I want to surround myself with, and I surround myself with it.”

Outfitted in red-and-white polka-dot sneakers, a blue sweater with white stars and his usual white jeans (better for working with white clay), Adler arrives at the company’s showroom downstairs, where a mind-boggling array of goods is on display. He sits on a white sofa with a curvy back. “One morning, I woke up, and I thought, ‘I really need to make a sofa that’s shaped like a cloud,’ ” he says. “And so, I did. It’s a good one.”

He is a man with a peripatetic mind, inspired in equal parts, it seems, by classic modern design, surrealism and pop culture. “Lots of different influences wend their way in and out of my oeuvre,” Adler says, cheekily giving the word an exaggeratedly French pronunciation. He points to a limed oak credenza with a hammered brass front bearing an abstract motif. “This is inspired by Reform temple architecture,” which he defines as “organic modernism with an attempt at transcendentalism and a commitment to craft, through the lens of Jewish intellectual hippiedom. And you know it when you see it.” 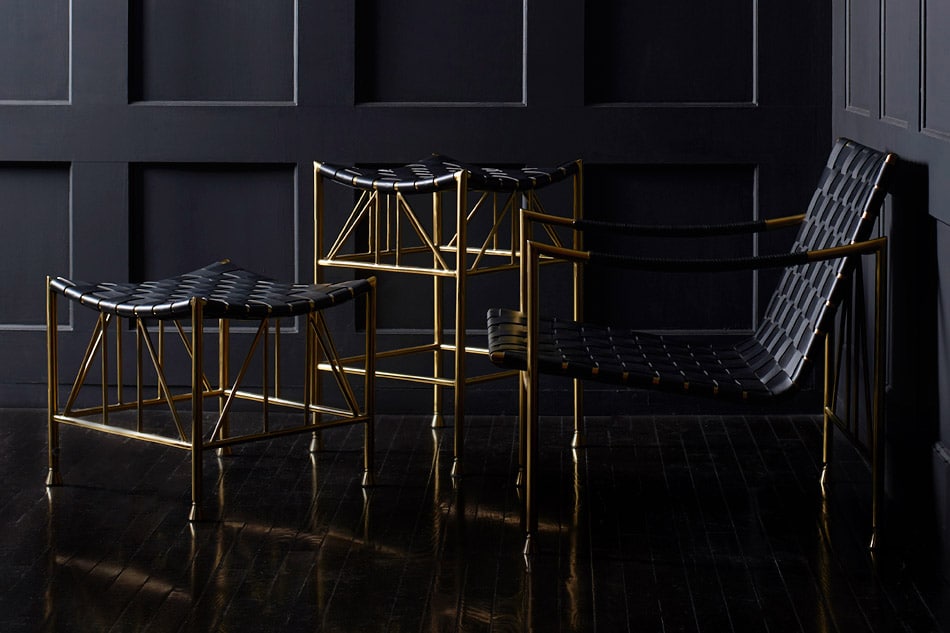 The Thebes collection comprises a stool, a counter stool and a lounge chair, all with brass frames and woven leather seats. 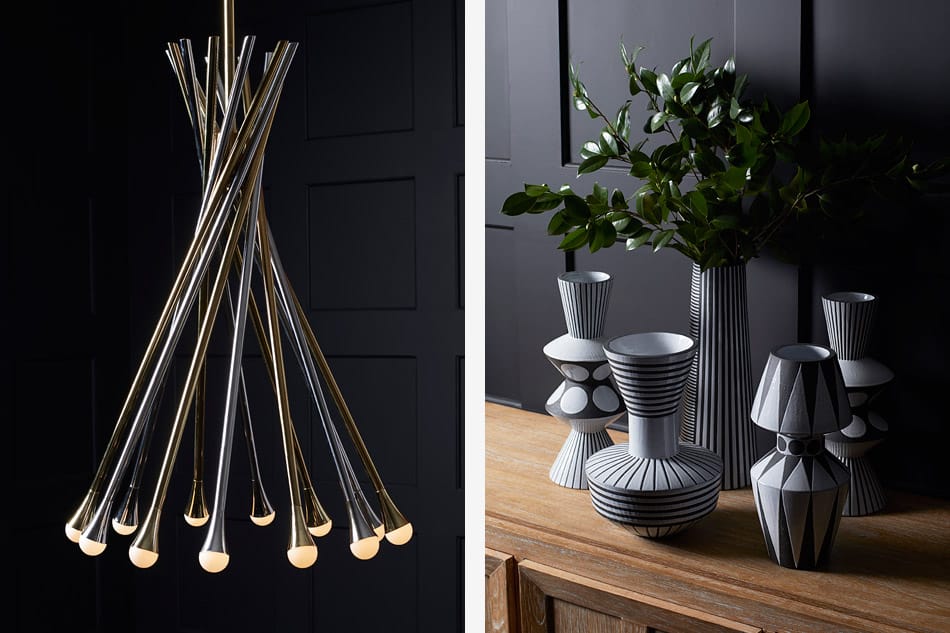 Left: The Electrum brass and nickel chandelier is named after the naturally occurring alloy of gold and silver. Right: This collection of items from the Palm Springs stoneware line includes Diamonds, Urn, Tapered and Bow Tie vases. 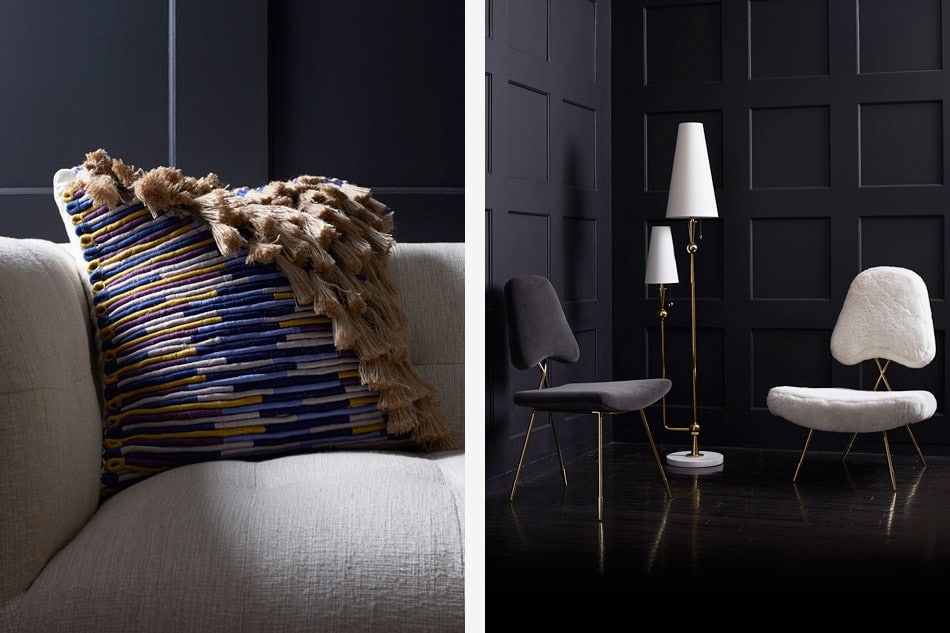 A subversive sense of humor runs through both Adler’s conversation and his collection — a vase that looks like an ice-cream cone held in a hand, a starburst mirror with fingers for rays, a head with a Mohawk hairstyle poked full of holes for lollipops. “I would say I’m one-half hippie-dippie potter and one-half fancy-pants New York interior designer,” says the designer, who speaks in a slang-inflected shorthand — “totes” for “totally,” “cray” for “crazy,” and “pleasz” for “pleasure.” “My two worlds collide with, I hope, explosively dynamic results.”

The way Adler tells it, he’s about the unlikeliest success story you could ever meet. “The main reason I have built my business is that I have always wanted to never have to answer to anybody,” he says. “I was a terrible employee. I am not fit for employment.”

“I really try to get to know my clients and then make them seem more glamorous and more eccentric than they think. I see myself as a slimming mirror for them.”

Adler grew up in a New Jersey farm town — “and not horse country,” he notes wryly — to which his paternal great-grandparents had migrated to be farmers. His grandfather became a local judge, and his father returned home after graduating from the University of Chicago. “My pop was a brilliantly talented artist. At one point, he had to decide whether to become an artist or a —,” he pauses, searching for the right word, “person.” His father became a lawyer but spent all his free time in his studio, “making art, unencumbered by the need to make money from it. It was a totally pure pursuit.”

Adler’s mother, who had worked at Vogue and moved to the rural town reluctantly, was also creative, and both parents encouraged their three children’s creativity. “We were parented by benign neglect, absolutely zero life lessons or philosophical dogma,” he says. “The only thing that I really got from my parents, and this was not explicit but somehow implicit, was to never be banal. I could not possibly be more grateful. It’s a good way to roll.” 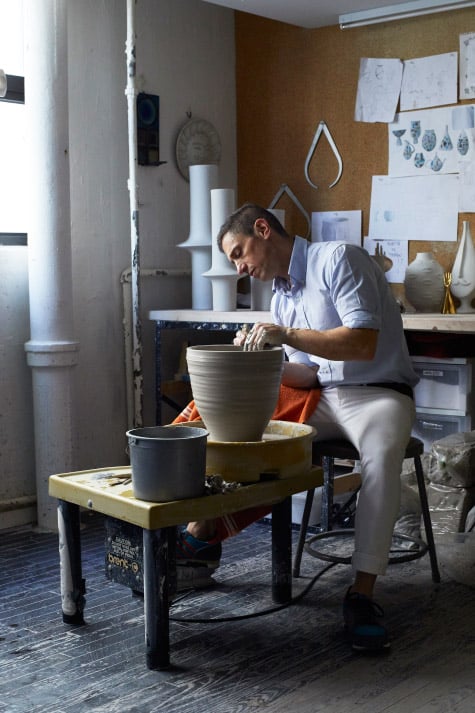 Adler throws a pot in his Soho studio, which he calls the “heart and soul of everything.”

When he was 12, Adler went to sleepaway camp, where he threw his first pot. “And it was on,” he says. His parents bought him a pottery wheel, and he spent the remainder of his adolescence elbow-deep in clay. Even while majoring in semiotics and art history at Brown University, he hung out at the nearby Rhode Island School of Design, making pots. After graduating, he moved to New York City and was promptly fired from a string of assistant jobs in the entertainment field: first for a talent agent, then a literary agent and finally a producer.

Asked why, he replies, “Insolence, promiscuity and laziness. Real news. At my first job, I didn’t understand you weren’t supposed to sleep with everybody in the office. I was sleeping with my boss as well as having an affair with a colleague, and my boss fired me when he found out. As he should.”

When it’s mentioned that the current torrent of sexual harassment cases has certainly made it clear that his boss should not have been having sex with an underling, Adler says, “I’ve never been a victim. Ever.”

In 1993, Adler ditched entertainment for good and returned to his true love, throwing pots (in exchange for teaching classes) at a Manhattan studio called Mud Sweat & Tears. One day, at Balducci’s food market, he ran into Bill Sofield, an old friend who had recently cofounded, with Thomas O’Brien, the now-legendary Aero Studios, a design firm and shop. Sofield paid a studio visit and promptly gave him an order. Then, another friend introduced Adler to a buyer at Barneys New York, who also wrote an order.

Soon after, a friend fixed him up on a blind date with Simon Doonan, at the time Barneys’ masterful creative director, responsible for the store’s wildly inventive windows. They married in 2008. Adler describes Doonan, who is also known for his witty writing, as a “limitlessly adorable person.”

For about three years after he began devoting himself to ceramics full-time, Adler was a one-man band, making each piece himself in what he describes as “backbreaking and skin-drying work.” Despite the street cred of both Aero and Barneys, he also wasn’t really making enough money to live on. Then, in 1997, he teamed with Aid to Artisans, a nonprofit aimed at creating economic opportunity for skilled artisans in developing countries, and traveled to Peru to hire potters who could follow his designs, thus increasing production. “That’s really how I was able to start my store — getting out from behind the wheel,” he says. 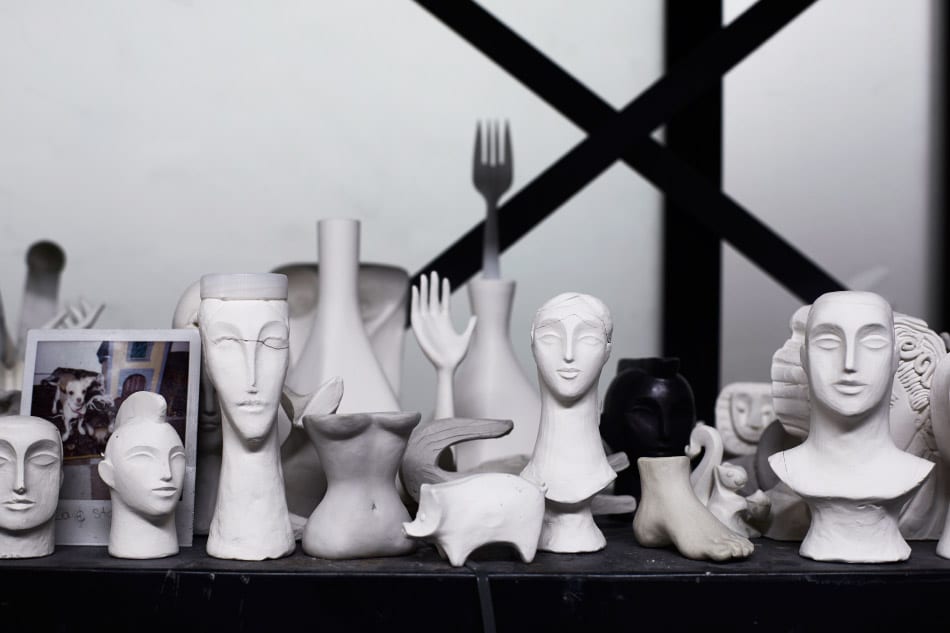 A collection of design prototypes is on display in Adler’s Soho pottery studio. 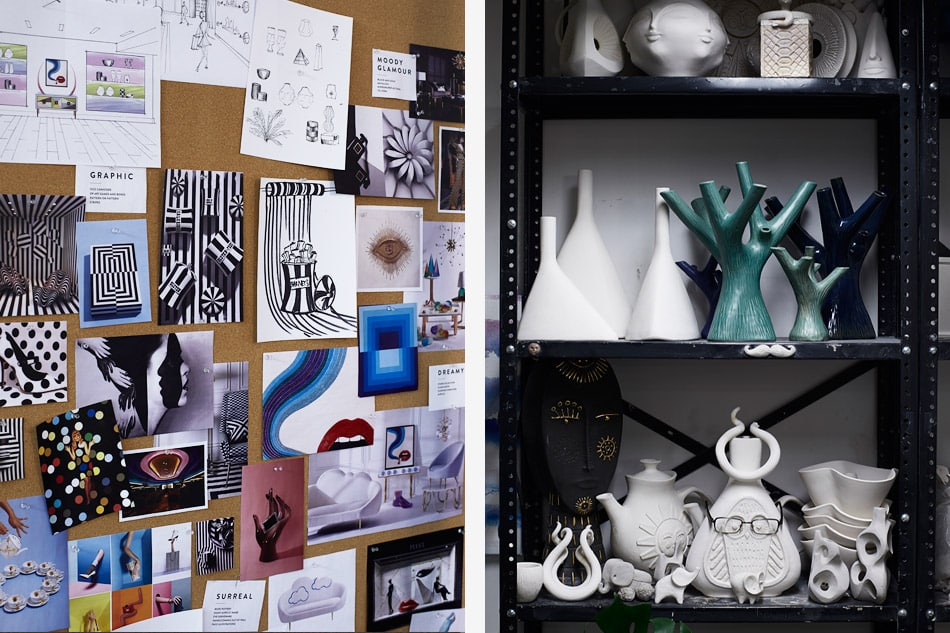 Left: An inspiration wall in Adler’s studio features images of his work. Right: Shelves of pottery fill the studio. 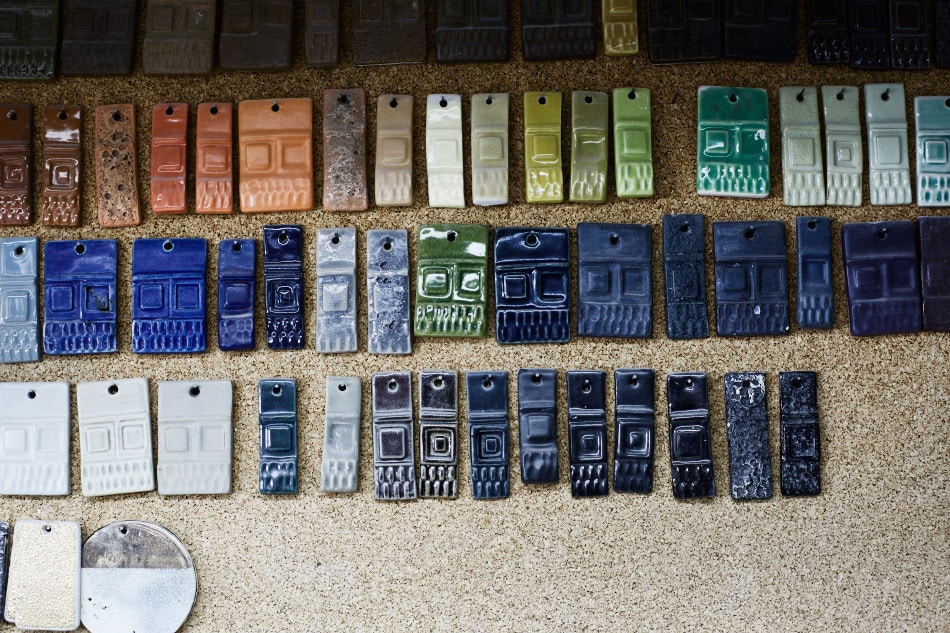 A selection of glazed pottery samples hangs on a studio wall.

His first store opened in 1998, in the Soho shopping mecca. “That’s when thing got varsity-adjacent,” says Adler. “Things got truly varsity about ten years ago.” He now operates about two dozen shops, as far-flung as London and Bangkok, and has recently added to his empire a 1stdibs storefront, on which he posts such items as a set of bronze-glazed Aorta vases and his burled-wood Bond credenza.

Adler’s trip to Peru was significant in another way. He connected not only with potters but also with several talented weavers and decided to branch out into textiles. Other categories followed, leading him to travel the world in search of artisans who could execute his endless supply of ideas. In India, Adler found a man who’s expert at beadwork; he has his limed furniture made in Indonesia, his honey-colored wood pieces in Vietnam.

After a friend asked him to decorate her house, he expanded to interior design, taking on hotels as well as private residences — projects for which he remains “agnostic,” using pieces by other designers. “I really try to get to know my clients and then make them seem more glamorous and more eccentric than they think,” he says. “I see myself as a slimming mirror for them.” 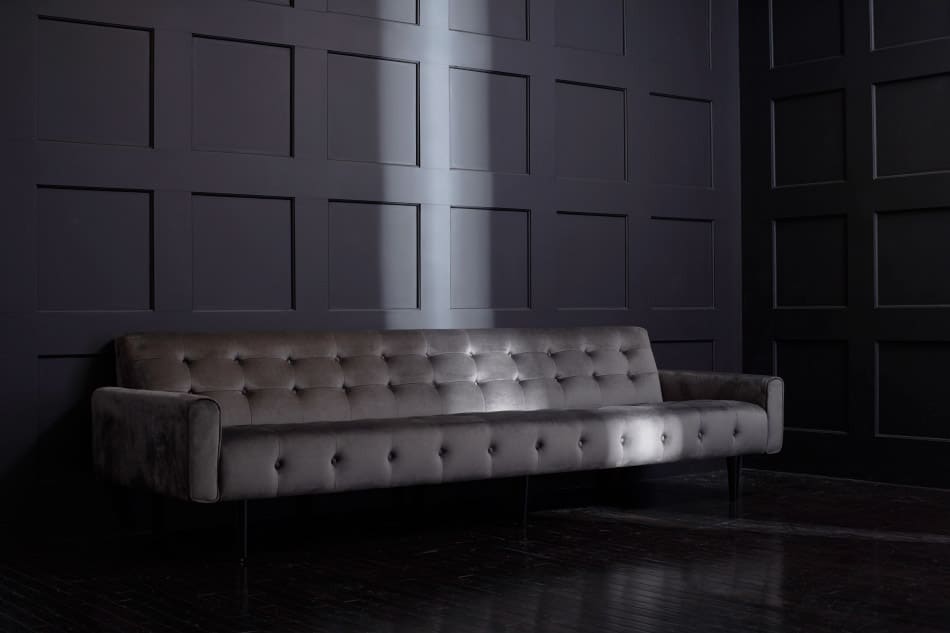 Many of Adler’s creations, like a Lucite head that appears to be melting and colorful “pills” the size of egg cartons, serve no obvious function, which raises the question: Has he considered crossing over into fine art and showing his work in a gallery setting?

He says he thought about making a transition early on but has come to find the products he makes better suited to his type of creativity. “The reality is, the fine-art world has almost an enforced constipation,” Adler says. “You can’t be too prolific or you start to be treated like Bernard Buffet or Erté or LeRoy Neiman, who are actually three of my favorite artists” but who are generally considered to have more mass appeal than canon-worthiness. “You need to have one thing and replicate it at a controlled pace. The fine art world can be the enemy of creativity.”

Besides, Adler says, “I hate that distinction between art and craft.” He points to a seven-foot-tall bronze banana he recently made for the lawn of the Parker Palm Springs resort. It certainly looks like a monumental outdoor sculpture, a piece of Pop art that could be an homage to Claes Oldenburg. But, he notes, “each peel is a seat. It’s applied art.”

To his mind, Adler says, “I have the funnest job on the planet.” He adds with a laugh, “And I beg all the readers of this to please keep buying so I get to continue my delightful journey.”