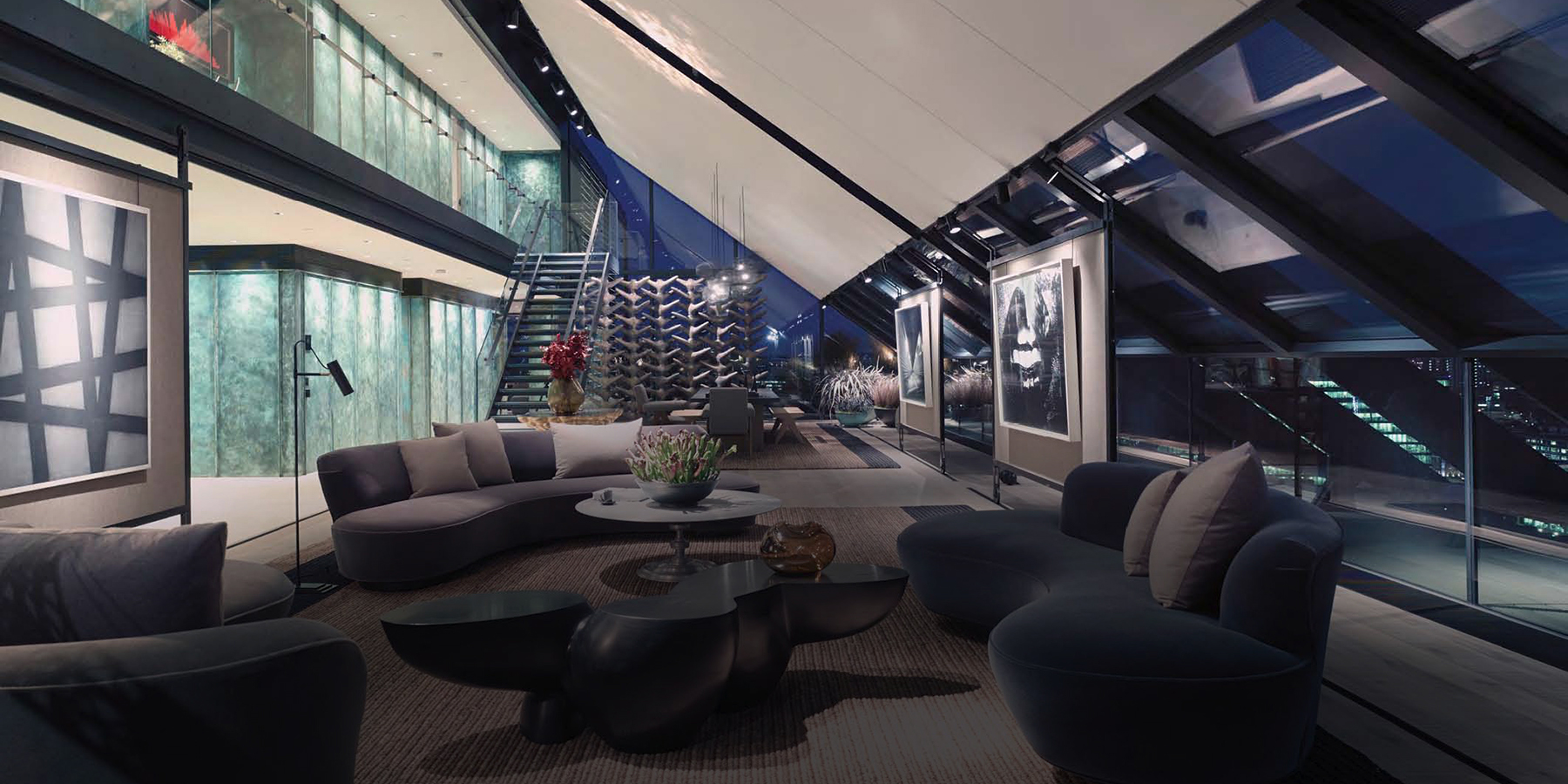 He creates dramatic interiors that any shelter magazine would kill for. But despite, or perhaps because of, his high-flying clientele — which ranges from Jordanian royalty to David Bowie and Iman — London interior designer and architect Jonathan Reed maintains a decidedly low profile. 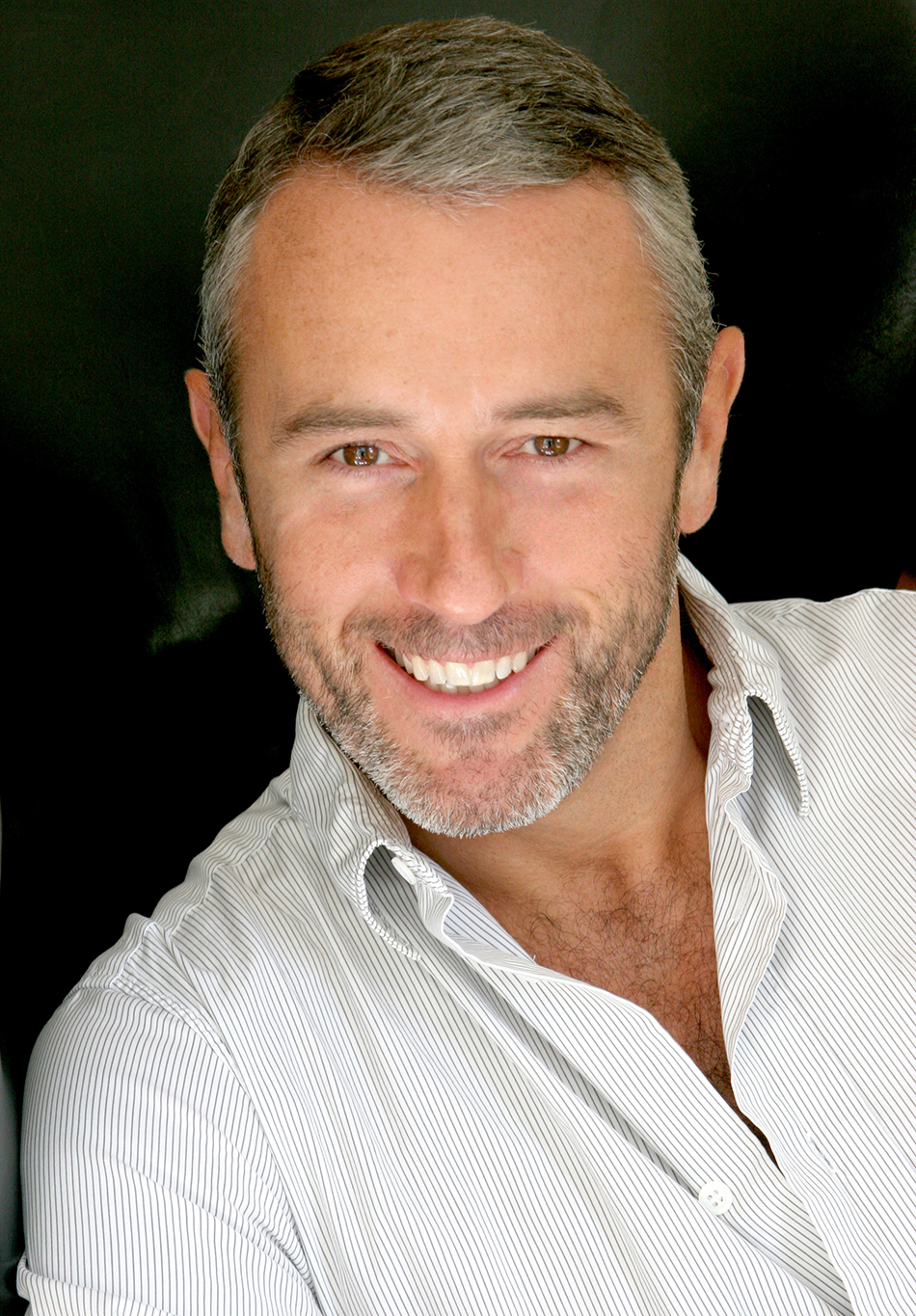 As unassumingly under the radar as his private residential clients are high profile, British interior designer and architect Jonathan Reed recently tackled a rare commercial project: the scheme for the show penthouse of the Neo Bankside apartment towers in South London (top, photo by Nick Guttridge), designed by Richard Rogers.

Jonathan Reed is a Google nightmare. Enter his name and up pops 1. a poet who writes verse that can be read in reverse and 2. a UFO hunter. Add the term “interior designer,” and you’ll find just two published projects: a yacht and his former London mews house — a bespoke residence with haberdashery swagger. And his firm’s website, Studio Reed, consists of a single page with nothing more than contact details.

“I bury my head,” admits the low-key, salt-and-pepper-bearded designer whose high-profile clients include Queen Rania and King Abdullah of Jordan, David Bowie and Iman and Elle Macpherson. (Ever the English gent, he does not drop those names himself.) “I could never say, ‘This is my look. So buy my chair,’” Reed says with a hearty laugh. “We offer clients furniture and interiors that are concocted specifically for that person in that place in that time.”

Piled on his desk — where Reed, wearing a Lanvin jacket, sits on an exercise ball rather than the Richard Wrightman campaign chairs that otherwise fill his 40-employee-strong Chelsea offices — there is compelling photographic evidence of his otherwise hard-to-see projects. Here, he shows off images of a double-height gallery, which he used to reconfigure and join two spaces in a historic house by the British architect Edwin Lutyens that was protected by strict preservation guidelines. “It had amazing craftsmanship and materiality,” Reed said of the architect’s work, “but appalling design in terms of functionality.” Reed paneled the space in lustrous, air-dried English quarter-sawn oak to honor the Arts and Crafts influences. “I refer to that style all the time,” he notes. “It’s not so much an aesthetic correlation, but about working with people who understand their material and craft.” 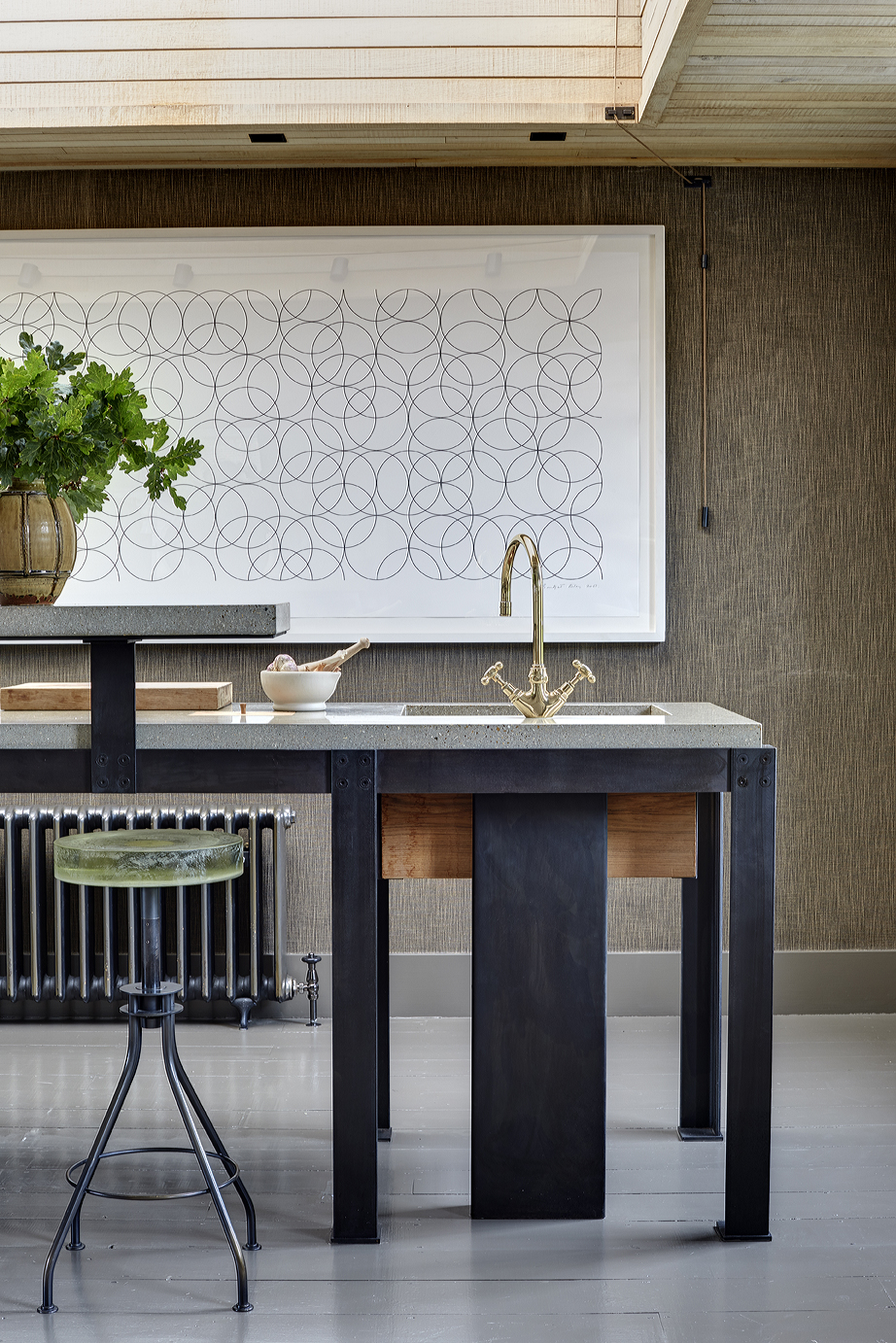 In the coach house’s light-filled kitchen, Reed designed an industrial-feeling workspace topped by concrete counters. The glass-and-steel stool is by Alison Berger; the artwork by Bridget Riley. Photo by Luke White

Indeed, for a recent beach house commission in Kuwait, Studio Reed, which does both architecture and interior design, conjured a 25-foot-tall cast-bronze façade. Inside, there are console tables made from Cor-Ten steel pulled by a tractor and twisted into ribbons, curtains made from nettle woven in the Himalayas and vegetable-dyed in the English countryside and a decorative wall mosaic comprised of 4.5 million individual tiles. Inspired by the grasses and insects native to the building site, Reed had craftsmen carve wood and plaster walls in the dining room to resemble a field of bulrushes dotted with silver dragonflies, which were cast from life and sport wings of abalone shell and mother of pearl.

“Right now, there is a massive desire for anything that is evidently made by man,” says Reed, who fills his office with hand-wrought curiosities. Among them: lamb and yak hair rugs purchased from a herdswoman in Bhutan, a English theater mask made from a top hat, a goose coop where his dog Harris likes to nestle and a Fritz Lang–influenced industrial desk lamp. “It was given to me by my office for my birthday,” Reed says, smiling. “It’s supposed to represent me, because it looks like a torture device.”

Though he leans toward unique pieces and custom design, Reed values antiques. “I’m always ranting in the office: Don’t start designing a chair or a sofa until you know how it’s made,” he declares. “Get an old one, and have a look if you want to be inspired.” In his interiors, antiques have to be fantastic. He adds that 1stdibs has raised the bar, “because now people can shop for things they wouldn’t normally see unless they traveled the world.”

Many of his clients are also collectors of European 20th-century design. “Prouvé and the Danish designers understood how to construct something and refine it but make it simply and honestly,” Reed observes. “That’s key to what I like and what we do. If we can create an interior into which that stuff fits seamlessly, great, but that doesn’t mean that we wouldn’t also put more decorative Arts and Crafts furniture next to it because the two things talk to one another.” 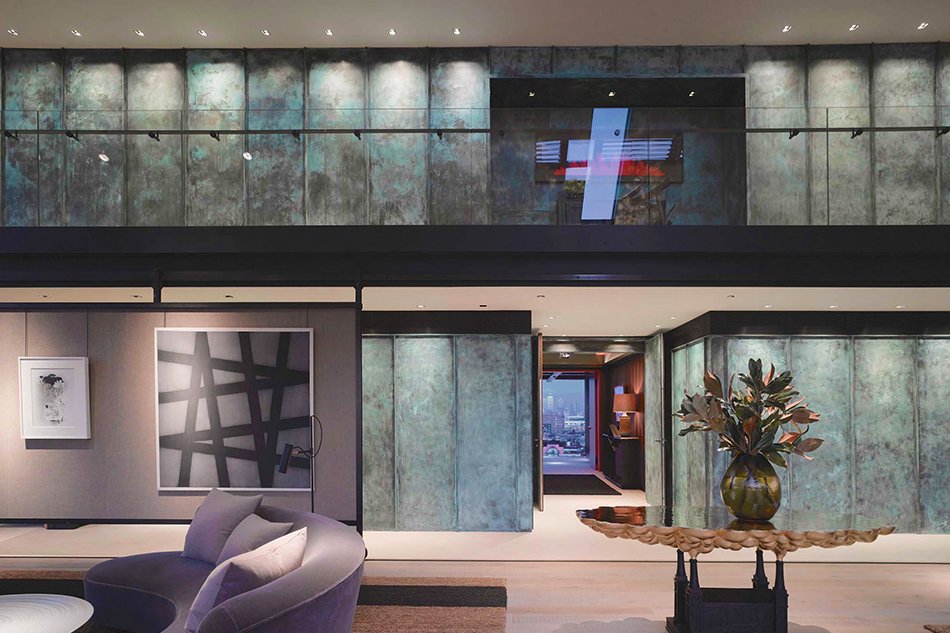 Verdigris-patinated copper covers many of the walls in the NEO Bankside penthouse. The sofa is by Vladimir Kagan, and the polished-and-patinated-bronze table is by Studio Job. All NEO Bankside photos by Nick Guttridge, courtesy of Native Land and Grosvenor

“I’m always ranting in the office: Don’t start designing a chair or a sofa until you know how it’s made. Get an old one, and have a look if you want to be inspired.” 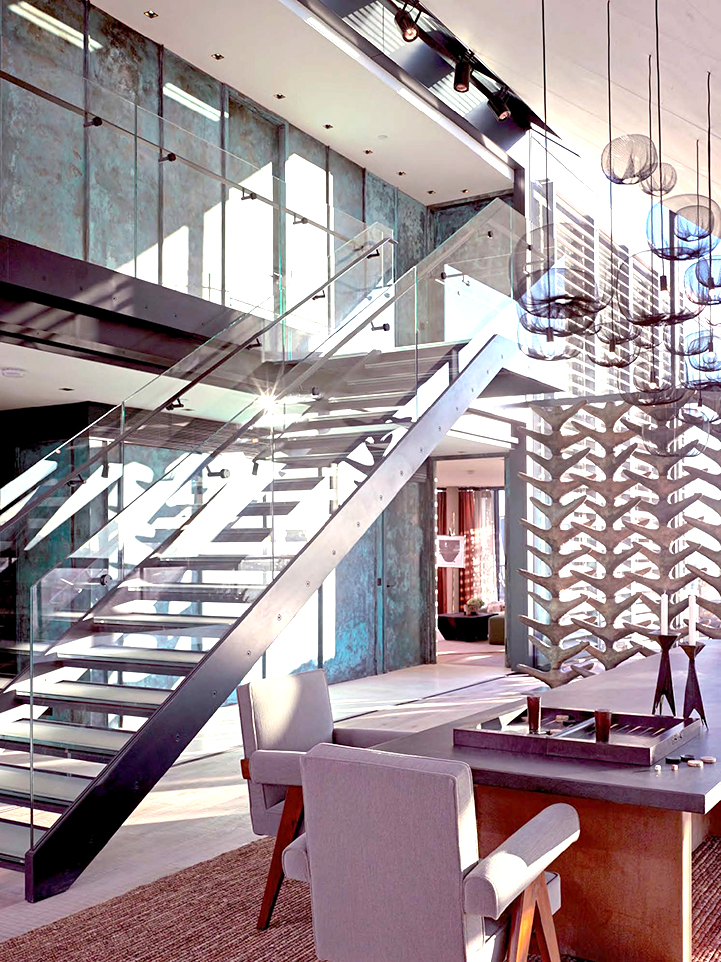 Walls of glazing let light glint off the glass balustrades of the NEO Bankside penthouse’s staircase and catwalk. The hanging pendant lamps are by Nendo. Photo by Nick Guttridge

Reed is equally fluent in contemporary design, having just completed a commission for a penthouse by the developers of the south-of-the-Thames Neo Bankside apartments. It is listed at just over $30 million. “We envisaged this as a home for a design aficionado,” he says, explaining his hero piece, selected from Studio Job’s 2007 Robber Baron collection. “It’s a bronze table in the shape of the Battersea Power Station,” Reed says delightedly, “and the tabletop is formed by a gold cloud of pollution.”

Reed’s aesthetic was forged in a more bucolic setting. Growing up, “in the middle of nowhere in a country farmhouse on the moors some 50 miles north of York,” he was surrounded by rugged landscapes and sturdy dry-stack stone houses. “I had two interests: animals and architecture,” he recalls. “My dad was an engineer, and he would throw me a block of graph paper, and I’d sketch away.” He came to London to study physiology at King’s College; to make a little bit of money, he recalls, “I sold junk, or rather, j-u-n-q-u-e.”

His clients included Ralph Lauren and the founders of Hackett menswear, and soon both clothiers employed him to design stores. “The idea was to create an atmosphere in which people wanted to live,” explains Reed, who coordinated the interiors of Ralph Lauren Home Furnishing stores in Europe and served as a creative director at Hackett. “And that ultimately led to doing houses.” In 1993, he founded Reed Boyd, a retail design consultancy that worked with Asprey and Valentino. Three years later, he established Studio Reed. “I had no formal training in interior design, but after twenty years, you amass your language,” says Reed. “I’ve always had a leaning towards things that come from nature, so color is always muted and texture is always mottled.”

Though he is certainly urbane, Reed remains, at heart, a country lad. “I’m deeply allergic to the city. Living here makes you bonkers,” says the designer, who is also ambivalent about the digital age. “The internet is responsible for allowing a lot of people to believe they’ve seen a lot,” he sighs, “but actually they don’t really look at what’s around them.” For inspiration, he and his partner, fashion designer and luxury brand consultant Graeme Black, go walking in the Lake District or Scotland and spend as much time as possible in Reed’s house and garden in the Yorkshire moors. It is there that he has learned the time-honored technique of stacking stone without mortar. “I have built walls,” he says, “and I know what a difficult craft that is.” For Reed, design is a dialogue and a discipline that rises to any given challenge. “In the pursuit of creating fantastical things that have got longevity,” Reed proclaims, “I say bring it on.”