Judith Leiber Built Her Handbag Empire with Grit and Glitz 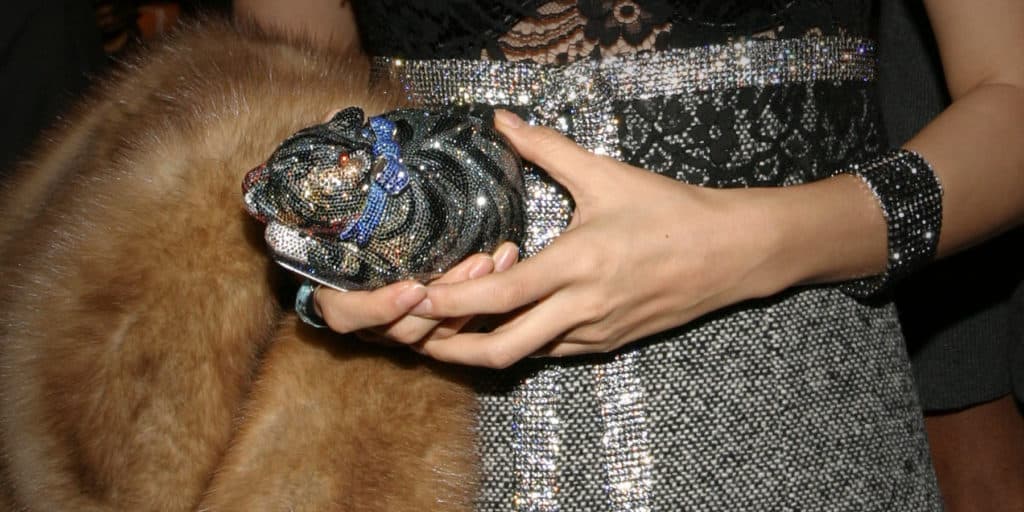 Favored by First Ladies and celebrities, her sparkly, whimsical creations were born out of necessity during World War II. 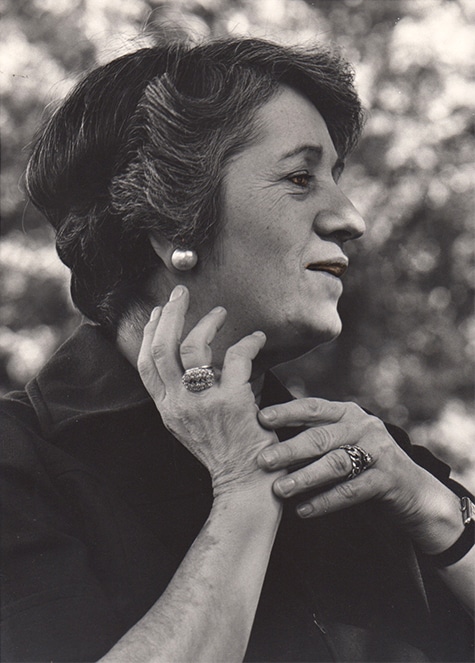 April 17, 2017The subject of a new show at New York’s Museum of Arts and Design, Judith Leiber, who survived years in Nazi-occupied Budapest before coming to New York, started her own handbag business when she was 42. Photo courtesy of Judith Leiber. Top: An attendee at 2004 the Judith Leiber flagship store opening party in New York carries a minaudière shaped like a sleeping cat. Photo by Bowers/Getty Images

Judith Leiber is best known for her unmistakable, blinged-out evening bags, which have been the go-to accessories of celebrities and socialites for decades. What’s less well-known is the Hungarian Jewish designer’s amazing personal history. During World War II, she worked at a handbag company in Budapest where she became an expert in European handbag craftsmanship. After several years, she left the position because Budapest had become too dangerous for Jews, and she and her family had to move from place to place within the city seeking safety. After the war, Leiber brought her expertise to the U.S. and became a successful entrepreneur, selling bags with her eponymous label in major department stores in the ’60s, when women were just beginning to break down the barriers in the workforce.

The exhibition “Judith Leiber: Crafting a New York Story,” on view now through August 6 at the Museum of Arts and Design in New York City, delves into the designer’s life and work, looking beyond the sparkle of the Swarovski crystals with which she famously and frequently adorned her creations.

“Just about everything on her bags was done by hand, with a level of craftsmanship that has rarely been matched in the fashion world,” says Samantha De Tillio, an assistant curator at the museum who led the development of the exhibition. “With her ability to make handbags from start to finish, she truly revolutionized the meaning of handbag craftsmanship in the U.S.”

Judith Leiber was born Judith Peto in Budapest in 1921. When she was a teenager, her parents sent her to London to study chemistry, hoping she would find work in the cosmetics industry. She returned to Budapest during the summer of 1939. When World War II broke out that September, “we couldn’t leave the city,” she tells 1stdibs. 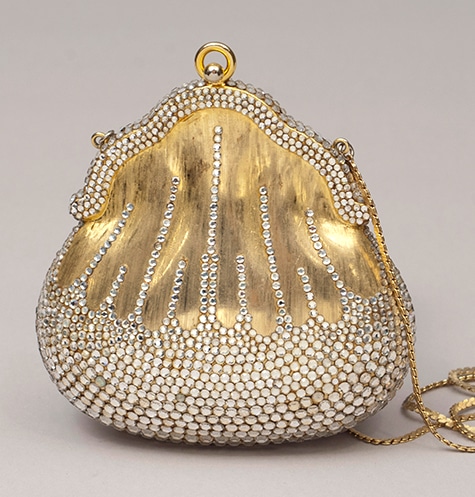 Among the treasures on view at MAD, a chatelaine with crystal rhinestones, 1967, which is the bag that Leiber embellished with rhinestones to cover up discolorations in the metal. Photo by Gary Mamay, courtesy of the Leiber Collection

“I became an apprentice at a handbag company, Pessl, and learned everything about making handbags, from the initial design to the final product,” she continues. (In 1995’s Judith Leiber: The Artful Handbag, she told author Enid Nemy, “Hitler put me in the handbag business.”) Leiber became a pattern maker, which at the time was almost exclusively a man’s job, both in Hungary and in the U.S. She was the first woman to join the Hungarian Handbag Guild, a professional association.

In 1943, Leiber stopped working at Pessl because her parents feared for her safety. The following year, the Nazis invaded Hungary, and her father was arrested and taken to a Nazi labor camp. Through a friend, the family was able to secure a “Swiss pass” giving them diplomatic immunity, and Leiber’s father was rescued from the camp. They moved into a Swiss-controlled apartment but were later forced into the Jewish ghetto. After liberation, they returned to their own home only to find that it had been badly damaged by bombing. So, for a few months, they sheltered in a basement and rationed food along with 60 other people. Once the family was able to move back home, Leiber began making her own handbags out of the factory of one of her mentors, selling them to Americans in the foreign service.

Shortly after the war, she met Gerson Leiber, and American G.I., on the streets of Budapest, and they married a year later, in 1946. The following year, the couple moved to New York City, where she became lead bag designer at the high-end handbag house Nettie Rosenstein. Leiber’s star began to rise when she designed an evening bag that Mamie Eisenhower carried to the 1953 Inaugural Ball. A decade later, she started her eponymous company in partnership with her husband. She was 42. 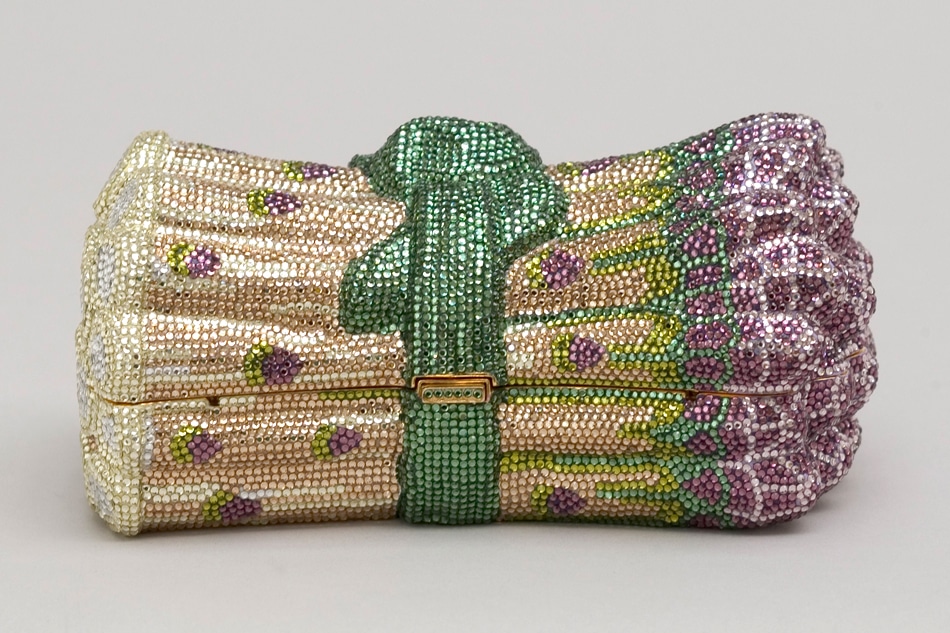 Also at MAD, an asparagus minaudière with rhinestones, 1996. All photos in this slideshow by Gary Mamay, courtesy of the Leiber Collection 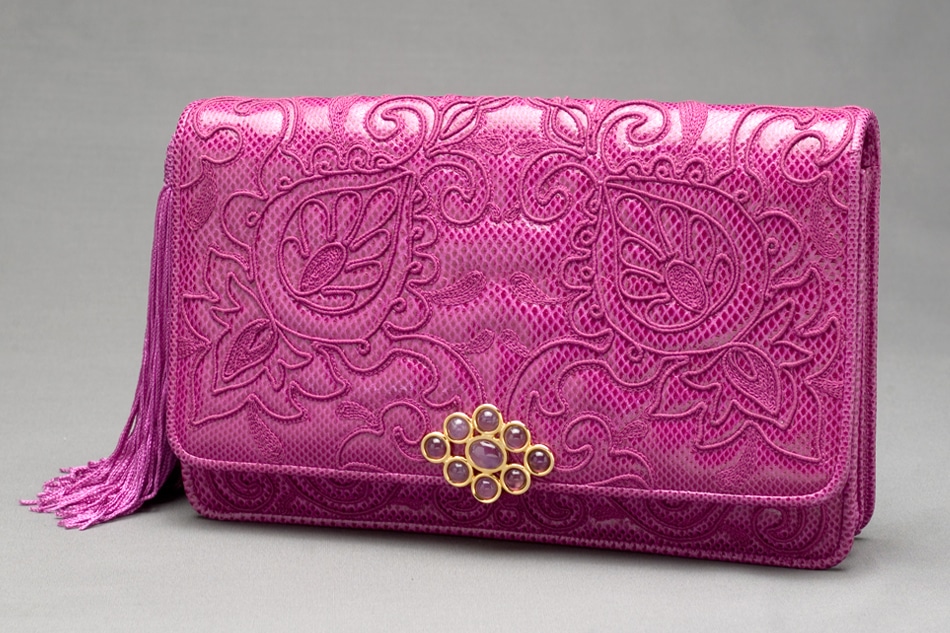 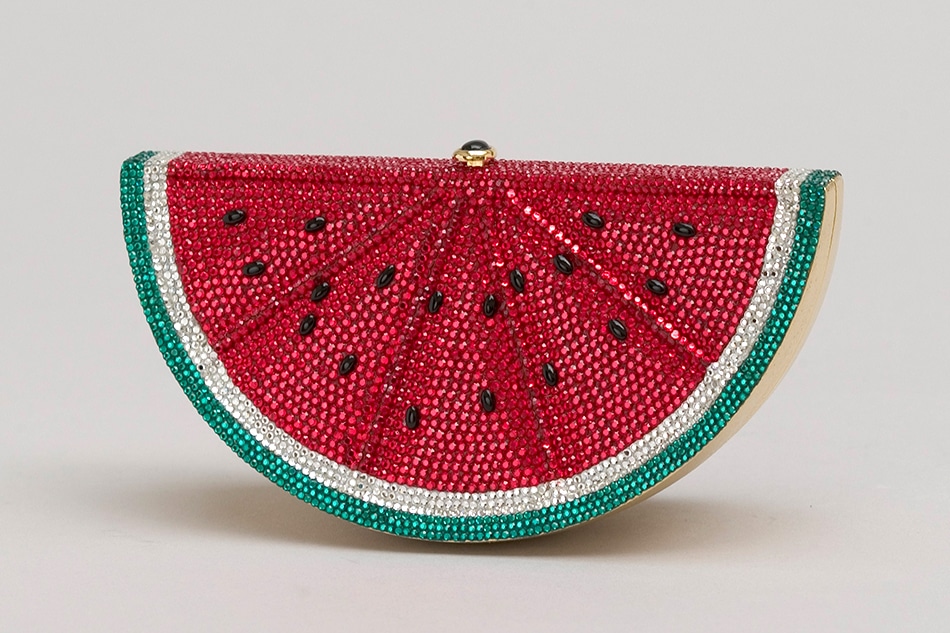 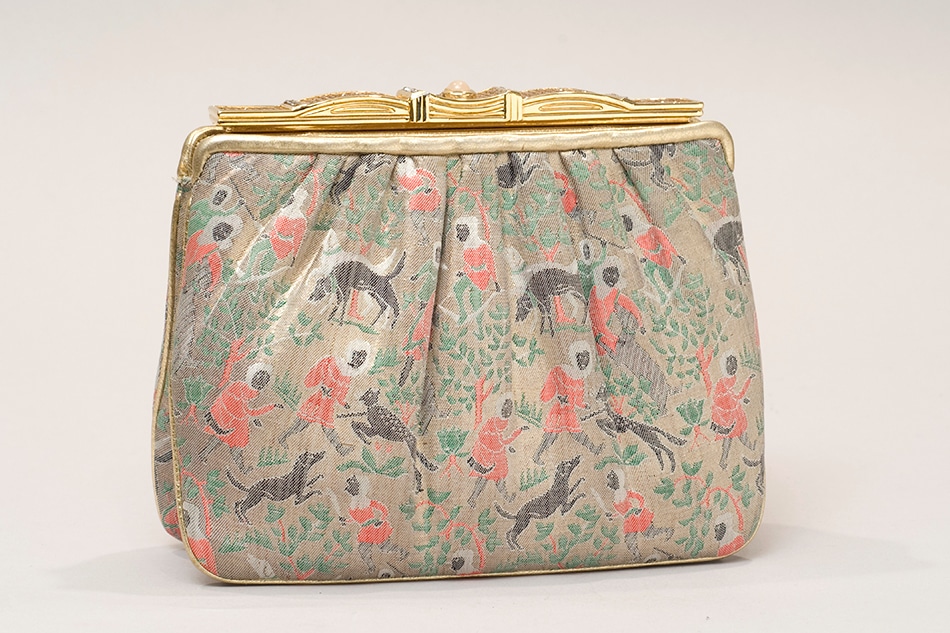 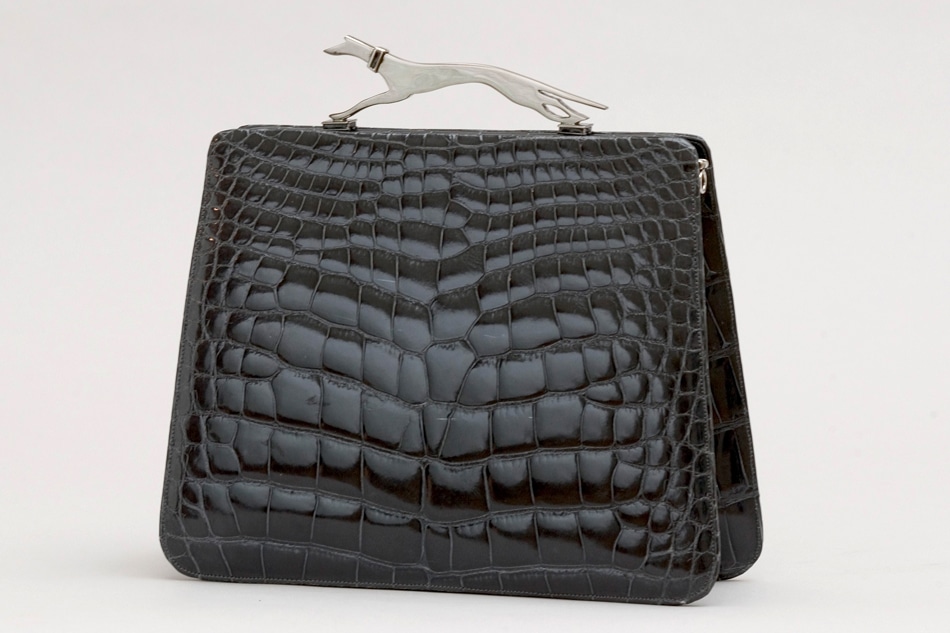 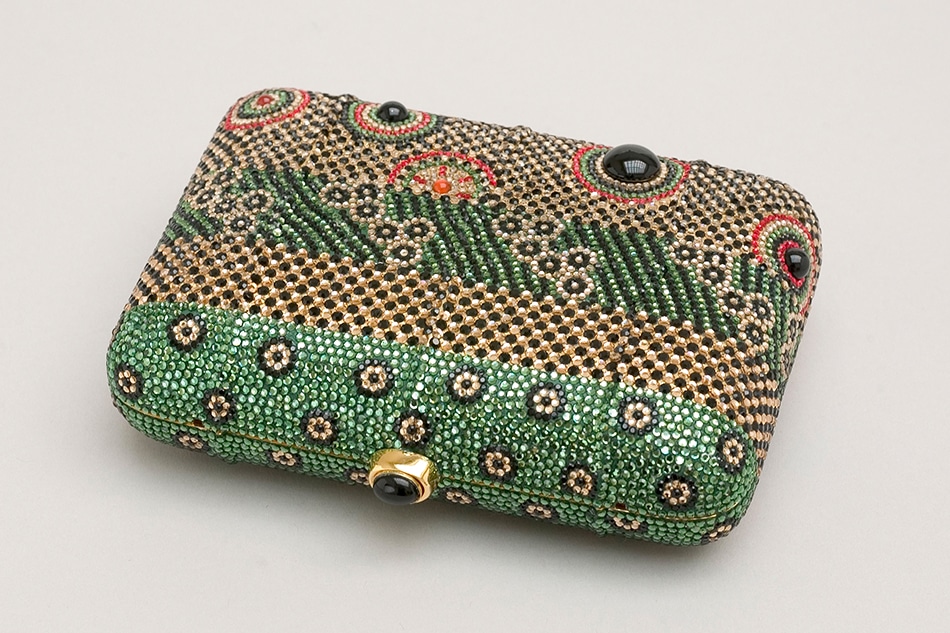 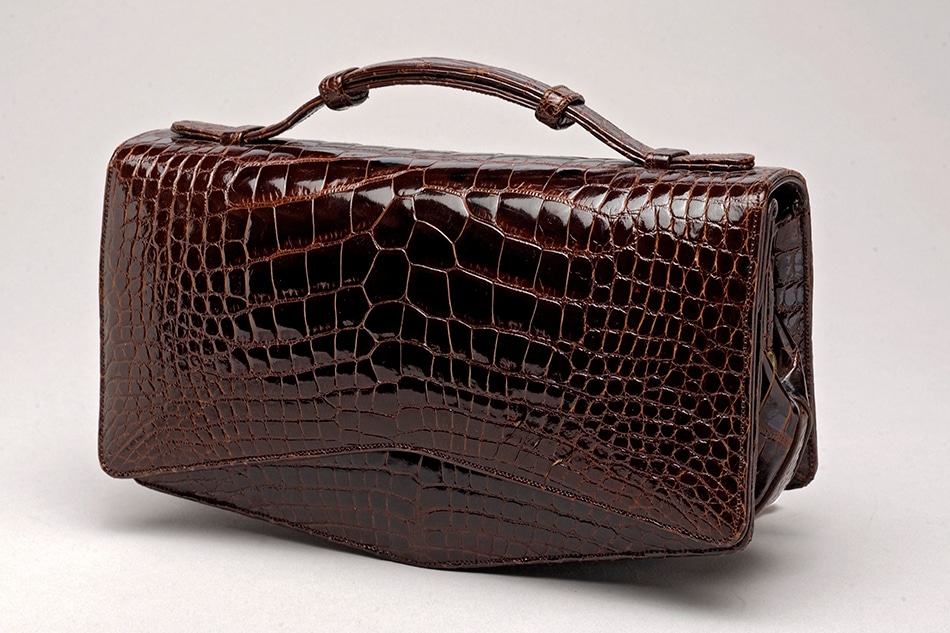 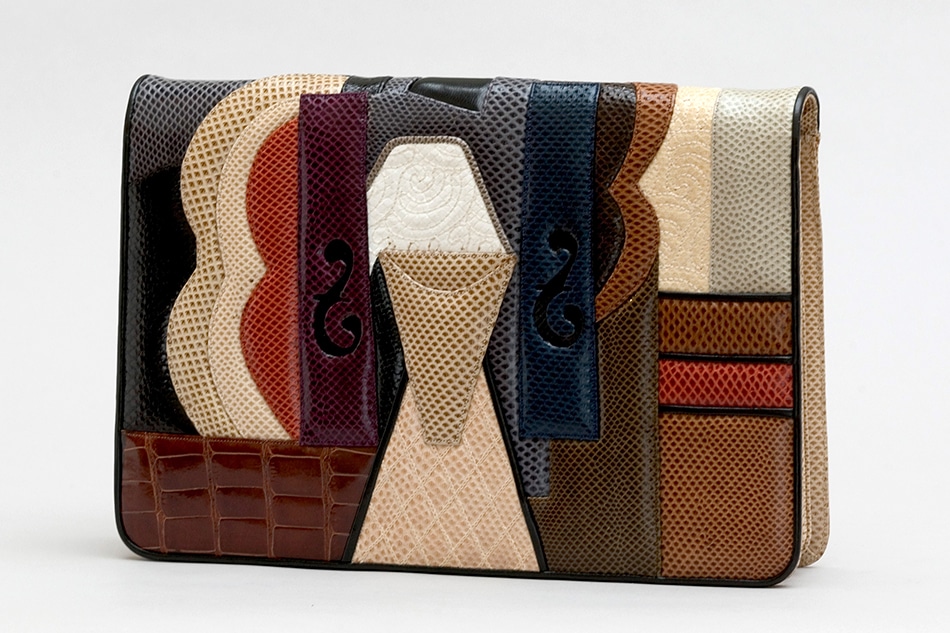 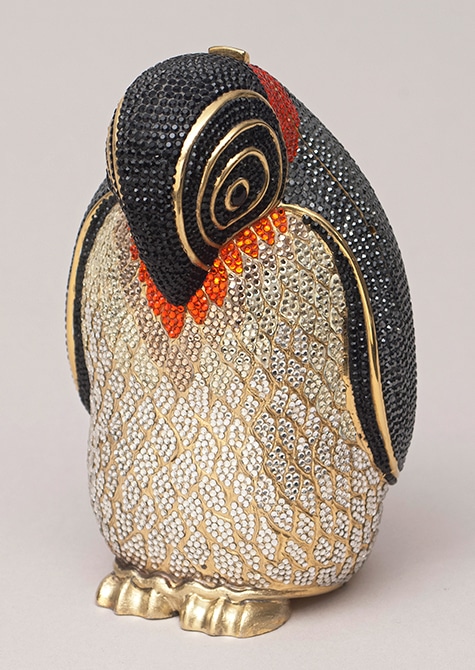 Penguin minaudière with rhinestones, 1991. Photo by Gary Mamay, courtesy of the Leiber Collection

In the beginning, Leiber created made-to-order bags, such as a Kelly-style day bag, from sumptuous materials like ostrich, alligator and lizard leathers. “When she opened in New York, various importers in the city would bring her interesting materials, including textiles from around the world,” De Tillio says. “A number of her early bags were made with Japanese obis and Parsi ribbons from India. Sometimes she would re-embroider over the design or attach rhinestones to complement the pattern.” Another creation from this period was made of transparent Lucite, a trendy material with a futuristic look suggestive of the nascent Space Age, although she added an extravagant twist with a splashy gold closure.

Then came her famous minaudières, small decorative evening bags made out of metal, which were molded at a foundry in Italy. When the pieces arrived from the foundry, the metal was discolored, so she covered up the imperfections with rhinestones. She went on to use Swarovski crystals to decorate countless odd and funny shapes, including musical instruments, animals, various fruits and vegetables — even teddy bears, Humpty Dumptys and Buddhas.

Now, playful bags often end up on Fashion Week runways, from such brands as Charlotte Olympia and Edie Parker, but “back in the seventies and eighties, no one was making bags that were so irreverent and funny,” De Tillio says. “You really see her influence on fashion’s sense of humor.”

Leiber’s husband, Gerson, became an accomplished painter, and her own interest in art, informed by her European upbringing, worked its way into her designs over the years. “Many of my bags are a testament to artists who have inspired me along my journey, such as Mondrian and Sonia Delaunay,” she says. “I approached designing my bags as if they were art pieces, and I always took pride in manufacturing them to the highest level of quality.” 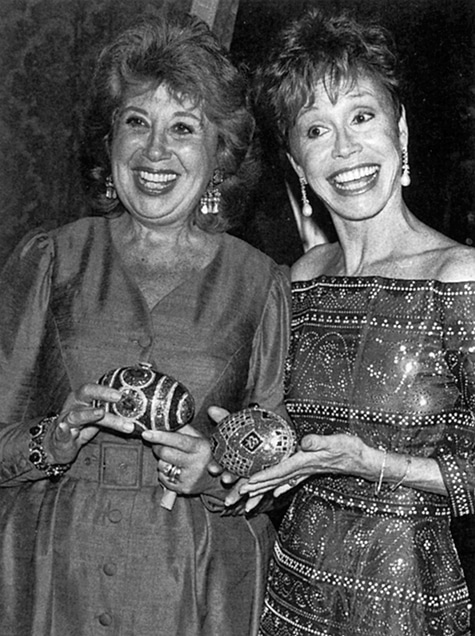 Leiber was particularly passionate about artist Faith Ringgold’s story quilts—a natural extension of the designer’s love of textiles, perhaps—and created crystal-encrusted bags inspired by them. She used funds from the sales of those pieces to purchase one of Ringgold’s quilts, which she donated to the Guggenheim Museum. Harold Koda, the recently retired curator of the Costume Institute at the Metropolitan Museum of Art, who acquired many of her bags for the institute, once observed that her pieces reminded him of Salvador Dalí’s telephone-dial compacts.

In the ’60s, such celebrities as Beverly Sills and Mary Tyler Moore began carrying Leiber’s bags. Many First Ladies were fans: In addition to Eisenhower, she designed bags for Lady Bird Johnson, Nancy Reagan, Barbara Bush, Hillary Clinton and Laura Bush. (One of Clinton’s bags, in a gold-plated sunflower design, is on view in the exhibition, along with Barbara Bush’s bag, shaped like the family’s English springer spaniel Millie.)

Although she sold the company in 1993 and “guest designed” her last bag in 2004, handbags remain a consuming passion for Leiber, who is now a nonagenarian. She and Gerson, to whom she is still married, started the Leiber Collection, a museum in East Hampton which displays her pieces — 1,700 of her roughly 3,500 designs — and his paintings. It’s open to visitors in the summer, and most days the artists are present.

“There are so many different aspects to Judith Leiber,” De Tillio says. “This resilient, strong, ambitious Holocaust survivor; an immigrant entrepreneur; and a proto-feminist figure, because she was a go-getter businesswoman even before the women’s movement began. My hope is that people come to appreciate who she really is.” 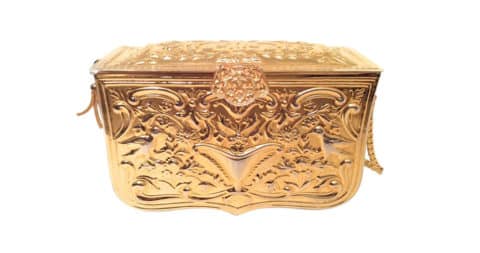 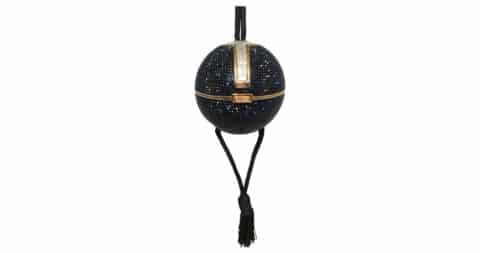 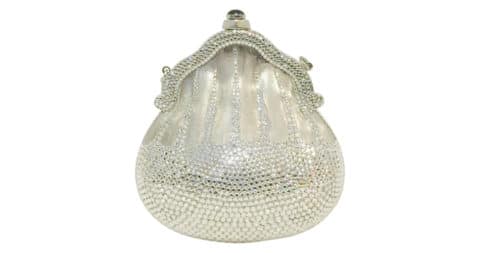 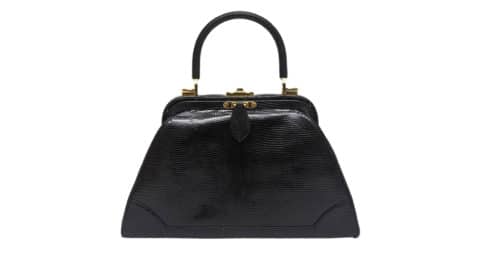 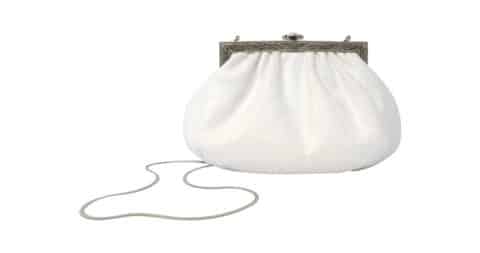 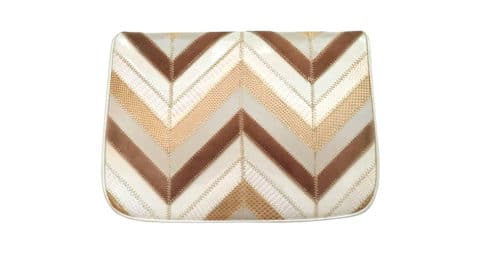 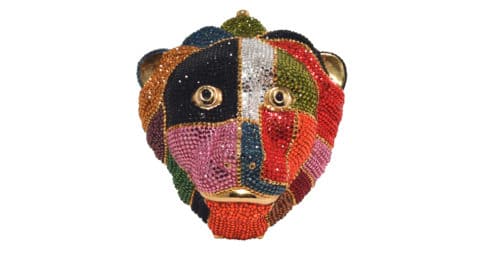