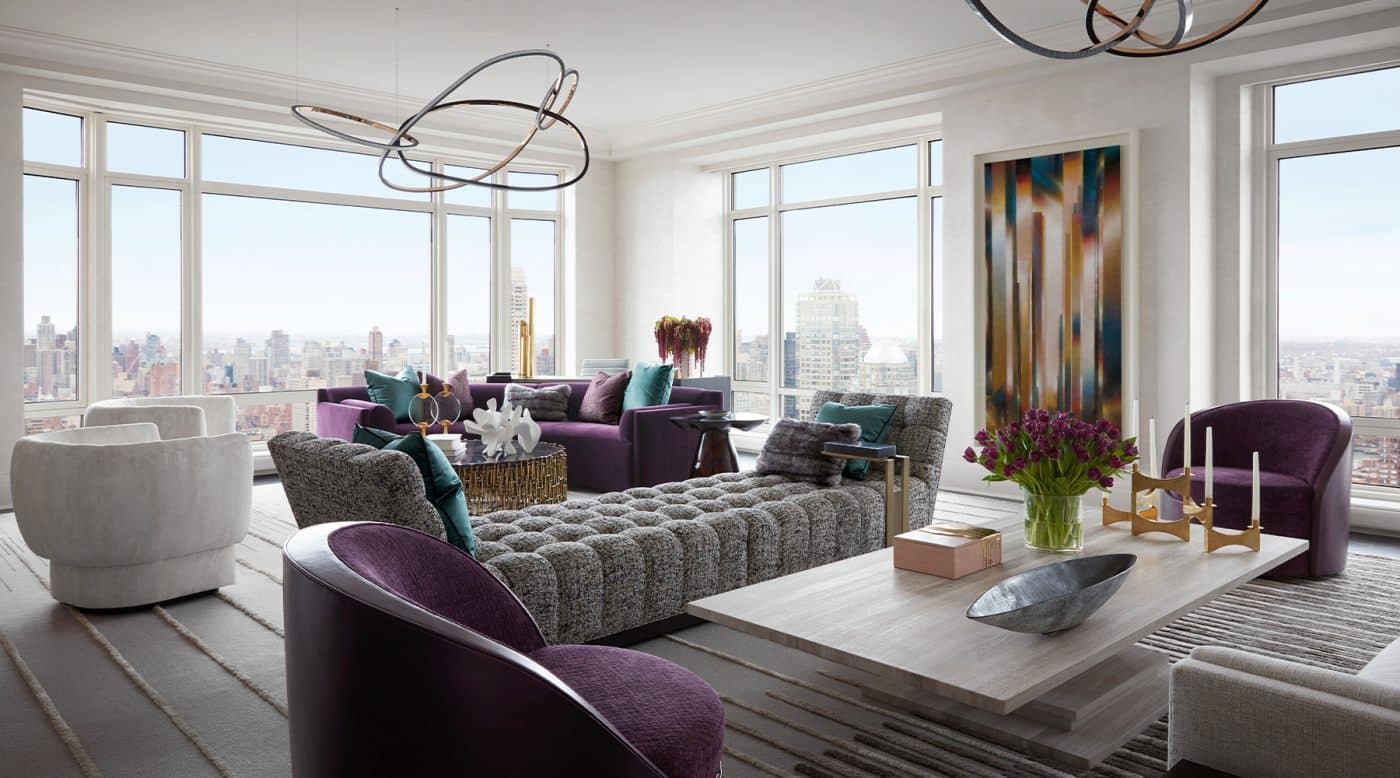 September 18, 2022When a design firm dubs a Manhattan project Gotham Glamour, a significant promise is made. Although New York City has no shortage of beautiful residences, true glamour is increasingly hard to find.

But when the firm is the Big Apple’s own Drake/Anderson, you can bet that the name is a statement of fact. Jamie Drake, after all, is the designer of choice for former New York City mayor Michael Bloomberg, for whom Drake took on the renovation of Gracie Mansion. Hard to get more Gotham than that, unless Bruce Wayne is the client.

Drake has worked with his business partner, Caleb Anderson, since 2015, and the duo have established themselves in the most rarefied realms of high-end residential design, working all over the world, with special attention to their hometown and environs.

The fruits of their labor are now on glossy display in Bold: The Interiors of Drake/Anderson. The book, coming out in October from Rizzoli, reveals for the first time the pair’s Gotham Glamour project — a soignée three-bedroom pied-à-terre for a family based on the West Coast.

The apartment beautifully embodies the firm’s style, which Drake characterizes as “exquisite, witty, sexy, confident and spirited.” If that sounds more like the description of a person than an aesthetic, it’s with good reason. Drake/Anderson interiors beguile and fascinate just like a cool, and colorful, acquaintance you want to know better.

Anderson points to another of their style’s defining elements: “Jamie is known for color, of course.” Indeed, Drake made his name by employing hue in the most dramatic ways while never veering into garish Real Housewives of New York territory; his palettes are always rooted in true reality. They’re stimulating but not jarring.

If the firm’s house style has another signature, it would be “gorgeous, sculptural, sinuous forms,” says Anderson. And that’s certainly on glamorous display in this apartment, completed a few years ago in a new limestone building from Robert A.M. Stern Architects, a firm known for rooting its modern look in classic principles.

Even though the edifice was of recent vintage, the apartment “still had very gracious, proper rooms that connected beautifully,” says Anderson. “It had a wonderful flow.” But the designers put their own stamp on it in many ways. This is particularly true of the kitchen and powder room, where they made what Anderson calls “contemporary interventions in the architecture.”

The clients, looking for a place to live but also to entertain, knew what they wanted, an attitude that certainly makes things easier for a designer.

“They liked our portfolio and were really drawn to this high-in-the-sky aesthetic,” says Anderson. They wanted the interiors to flatter the city views amply afforded by the windows, a brief the designers fulfilled by keeping the furniture low-slung.

Another request, somewhat unusual in such an apartment, was an atypical dining-room layout. So, the designers set the dining table (chic cristallo quartz on a brass base) at an angle on an amorphous rug. The striking lighting above — artist Sharon Louden’s constellation of crystal rods in a winding pattern of different heights — emphasizes the flouting of orthogonals.

Drake and Anderson also trained their experienced eyes on the elevator vestibule, particularly on the doors leading to the rest of the home — no space too small to worry over. “The clients wanted proper doors for entering, something that made a statement,” says Anderson.

To create the doors, the designers alighted on a talented artist, the Mexican maker Gloria Cortina. Cortina, represented by Cristina Grajales, came up with bronze-framed onyx-and-quartz panels. “It’s such gorgeous work.” says Anderson. “And we subtly reference their look elsewhere in the apartment,” as in the raised linear pattern of the living room’s Edward Fields rug.

The apartment is filled with art, none of it previously owned by the clients. Drake and Anderson leveraged their deep connections in the art world to come up with works by Dan Christensen, Barbara Takenaga and Mark Innerst. They put a thoughtful emphasis on abstract pieces that meld well with the patterning in the rugs and elsewhere.

The living room has many of the firm’s signature sinuous curves, beginning with the mirror-polished-bronze and glass chandeliers by Niamh Barry, represented by Maison Gerard. Something in their looping forms suggests the near-infinite possibilities of the big city outside.

Pops of amethyst in the barrel-back chair and the sofa, both custom, make a jewel-like impression. The color gets another callout in a throw blanket in the primary bedroom, highlighting the interlocking of elements throughout.

More rounded forms are found in the living room’s custom desk with a leather-wrapped work surface. Drake and Anderson made it for the husband of the client couple, who requested places to work throughout the apartment. “He wanted to be able to pivot and see the view,” says Anderson.

Complementing paintings on the walls by Takenaga and Innerst, a pair of totemic wooden sculptures by Elizabeth Turk — her interpretation of the calls of extinct birds — adds a vertical element to the living area. John Lyle’s circular cocktail table, in bronze and wood, is evidence of what Anderson calls the firm’s commitment to being “materially complex.” Different elements come together in harmony.

Architecturally, the kitchen got the heaviest makeover, with the designers creating a lilac marble island with an integrated leather banquette. Boldly patterned marble is a go-to for Drake. “The stone has an elemental richness to it and so much variety,” he explains.

Anderson’s favorite part of the room is the cabinets. “They are dimensional,” he says of their pyramidal front panels. “They come to a peak, and then we alternated the grain of the metalized silver oak.”

When it came to the bathrooms, Drake had a strategy. “It was about giving them a contemporary character without redoing them completely,” he says. “We did it with the vanities primarily, along with wall coverings.”

One full bath was transformed into a powder room at the clients’ behest. To ramp up the interest quotient, the firm installed a polished-marble vanity wrapped in brass. Silk on the walls and a glass mosaic floor add to the reflective quality.

The broad curve of the main bath’s vanity evokes the Art Deco era, or at least “Deco as filtered through the nineteen seventies,” says Drake, who topped the piece off with double slabs of marble whose graceful edges have a sloping bullnose.

The main bedroom is a galaxy of gentle grays, as evidenced in the fabric panels composing the wall behind the bed. At the foot of the bed, a custom brass cabinet, from Newell, whose front and back are each clad with a selenite crystal panel, turns out to be a clever place to hide a TV on a hydraulic lift. A Lindsey Adelman chandelier, boasting another pyramid shape, harks back to other formal motifs in the apartment.

A child’s bedroom may be an afterthought to some designers, but Drake made sure the one belonging to the daughter here had warmth, starting with the rose color on the built-in beds, one of which hides a trundle so that the room can sleep three.

The curves in that artwork subtly echo many of the more arresting and sinuous turns elsewhere in the home — which is very much by design. As Anderson puts it, “Finding a language to connect all the pieces is what we do.” 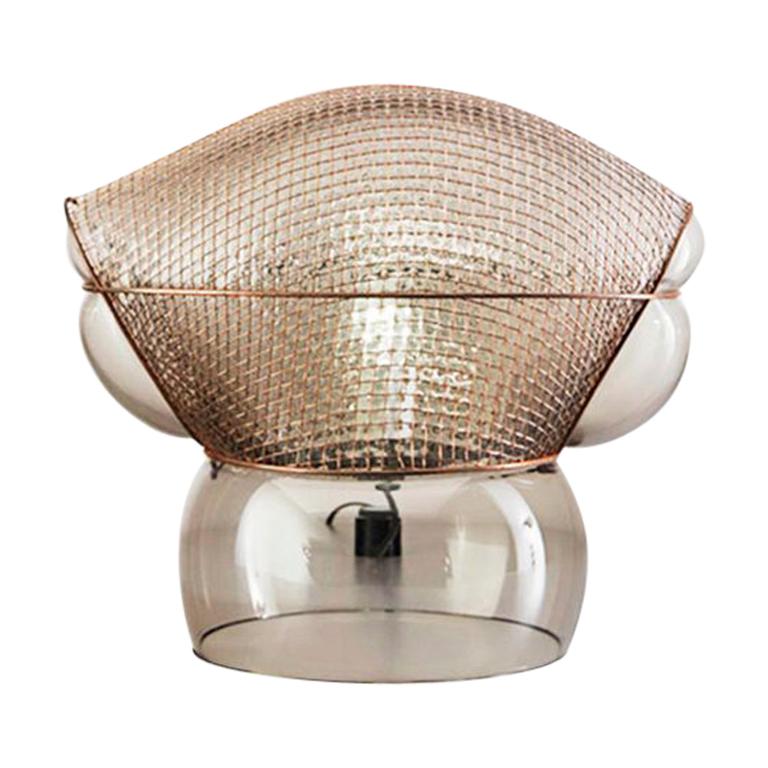 “Designed by one of the greatest design talents of the period from the nineteen seventies to the nineteen nineties, this is a lamp that is sculpture,” Drake notes. “Blown into the metal frame, it recalls a fencing mask in a mysterious way.” 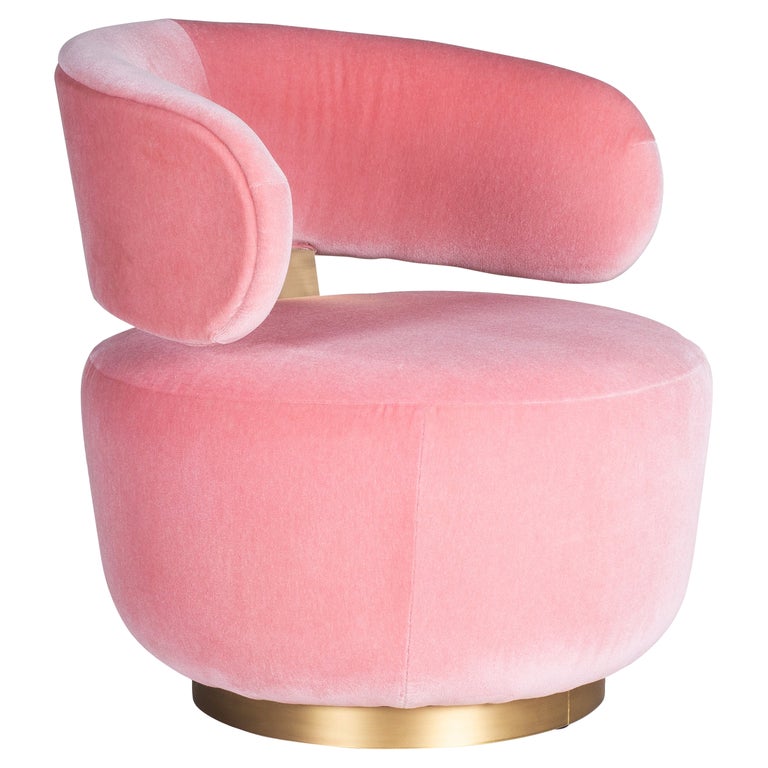 “I love the strong feminine energy of this petite chair,” says Anderson. 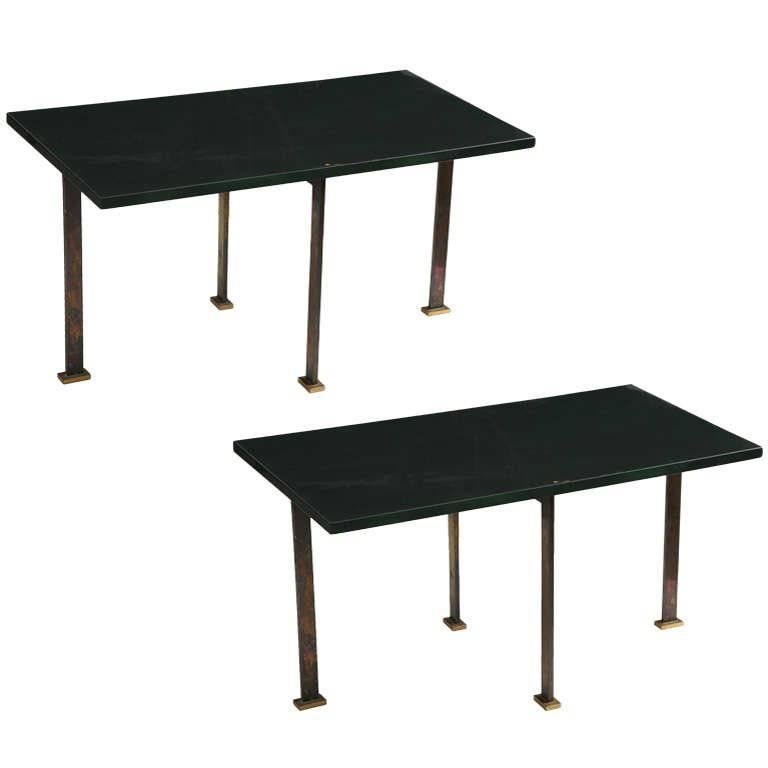 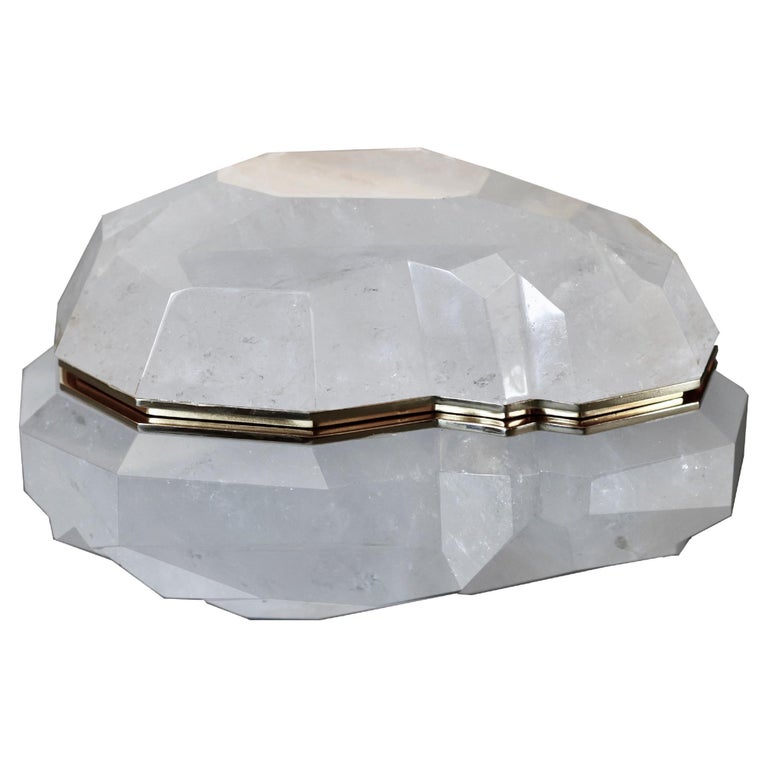 “Rock crystal adds an embellished, ornate element to a space,” says Anderson, “the way jewelry does to an outfit.” 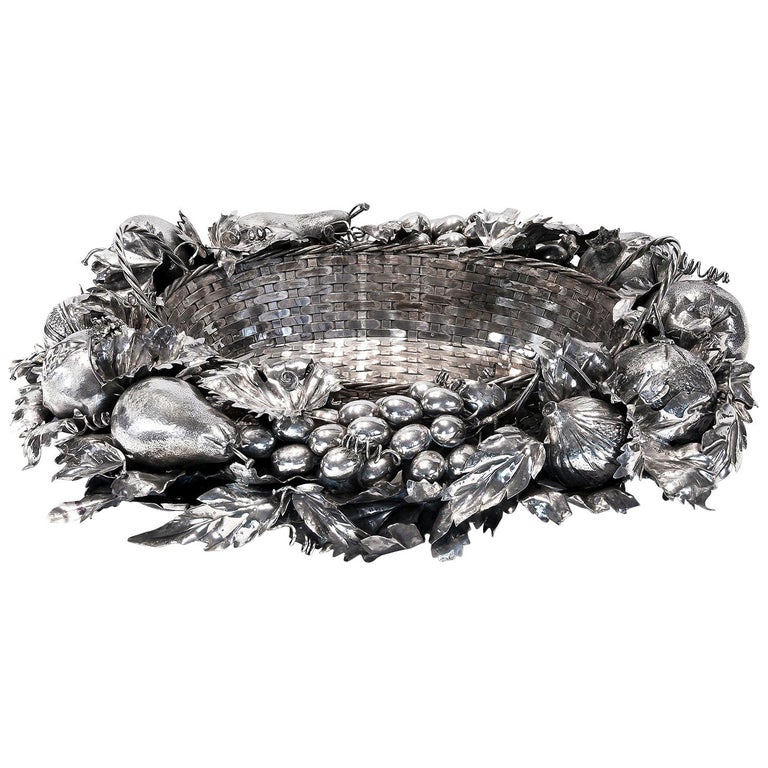 “Talk about a centerpiece!” enthuses Drake. “The woven basket is encircled with an abbondanza of fruits and leaves, all rendered in silver in Buccellati’s signature style.” 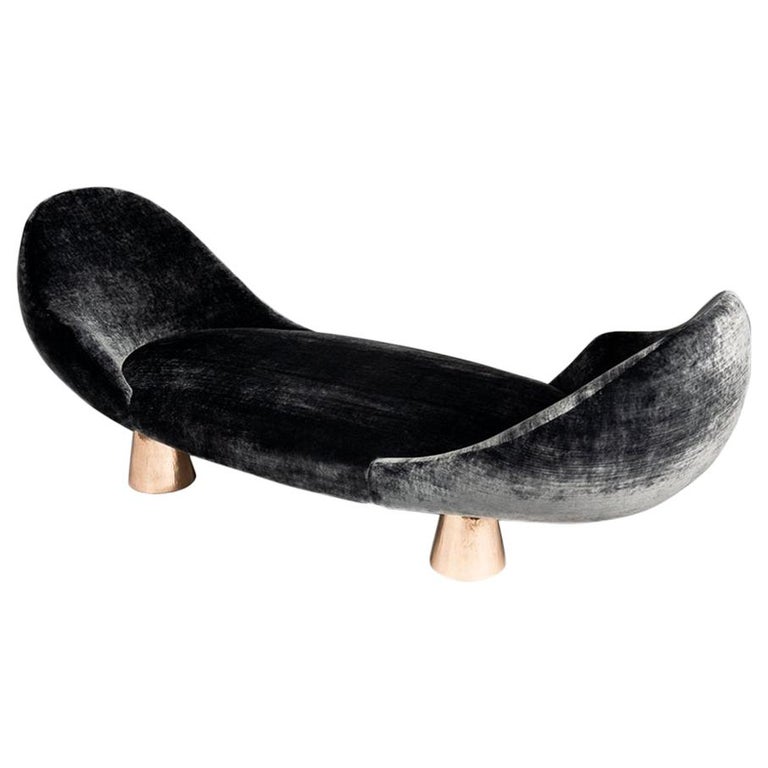 “This sensual, curved, asymmetric chaise longue has opposing arms for two to nestle into,” Drake says. “It’s truly the definition of a tête-à tête, a place to share confidences and conversation.” 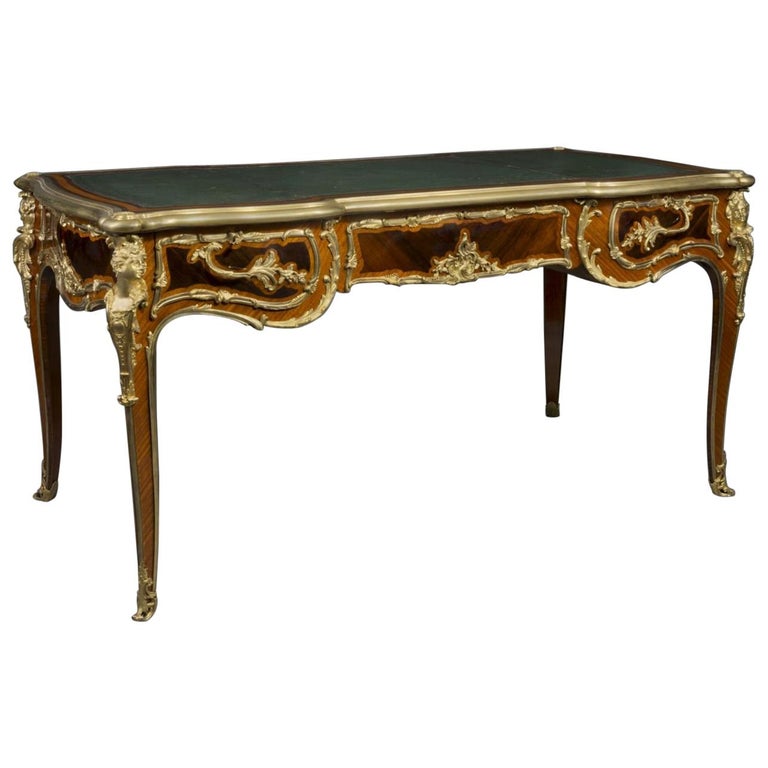 “An elaborate antique desk like this would partner beautifully with a contemporary chair,” says Anderson. “I love the clean modern lines of the leather inset top with gilt-bronze details.” 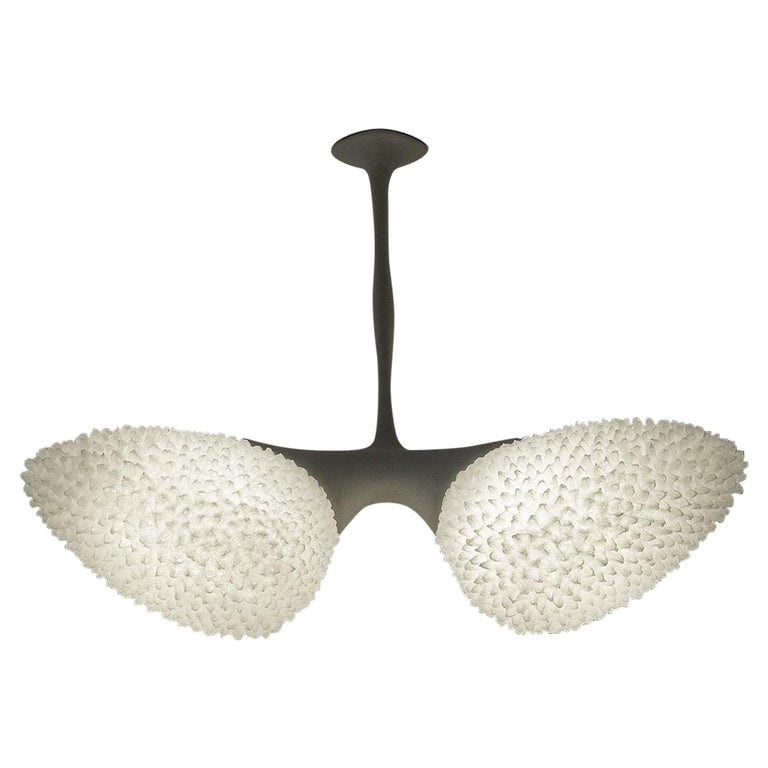 “The clouds that Serfaty creates are poetic lights to illuminate thought,” says Drake. 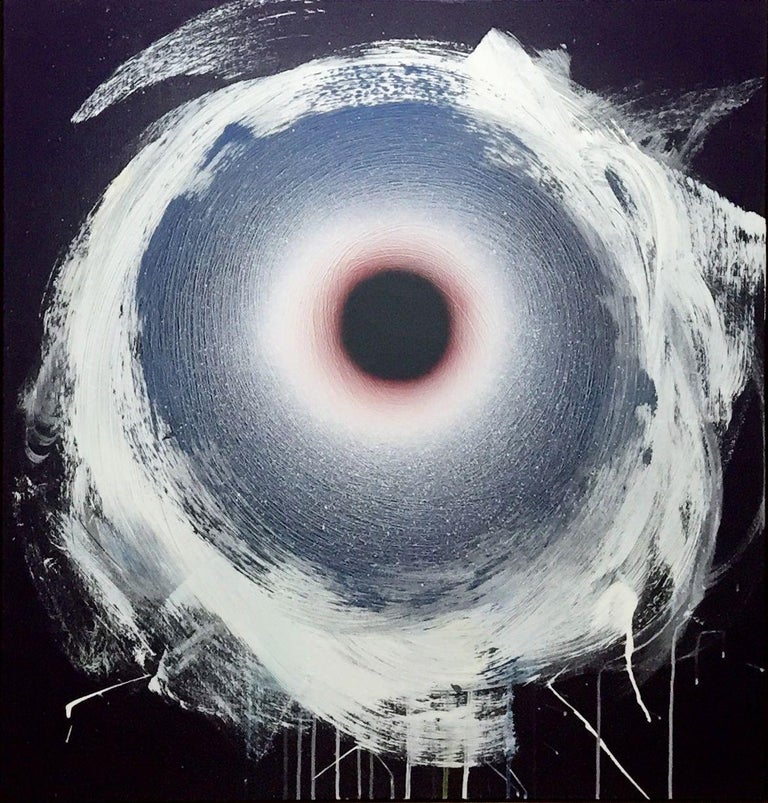 “A bold focal point is always something we look to create in a room,” notes Drake, “and this painting’s vortex of a winter storm draws the eye in.”