Why Madeline Stuart Is the Willy Wonka of Splendid Interiors 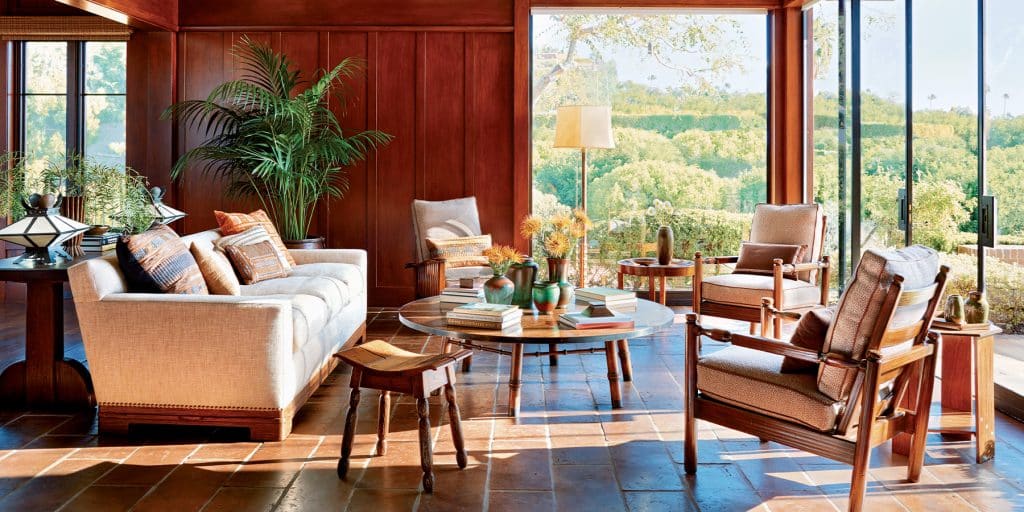 Much like the character in her father's most famous film, the Los Angeles designer relishes the art of surprising and delighting. 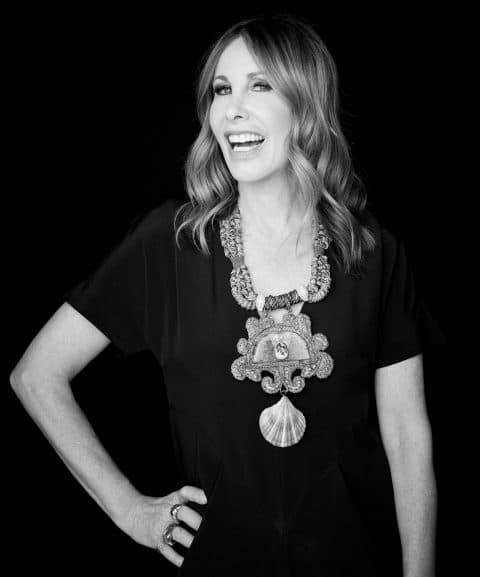 The Hollywood director Mel Stuart produced dozens of documentaries, including The Making of the President 1960 and The Making of the President 1968, both of which won Emmys. But his daughter, Madeline Stuart, begged him to make a different kind of movie, an adaptation of her favorite book, Roald Dahl’s Charlie and the Chocolate Factory. And he did. Released in 1971, and praised by Roger Ebert as the “best film of its sort since the Wizard of Oz,” Willy Wonka & the Chocolate Factory tells the tale of five children chosen to tour Wonka’s domain; the most exciting moment is when they open the front door to his phantasmagorical “chocolate room.” Mel Stuart captured their genuine looks of amazement.

Madeline Stuart is reminded of their excitement every time she opens the front door to show clients a house she has designed for them. What her father got from his actors, she says, “that is what I want from clients when they walk in for the first time.” 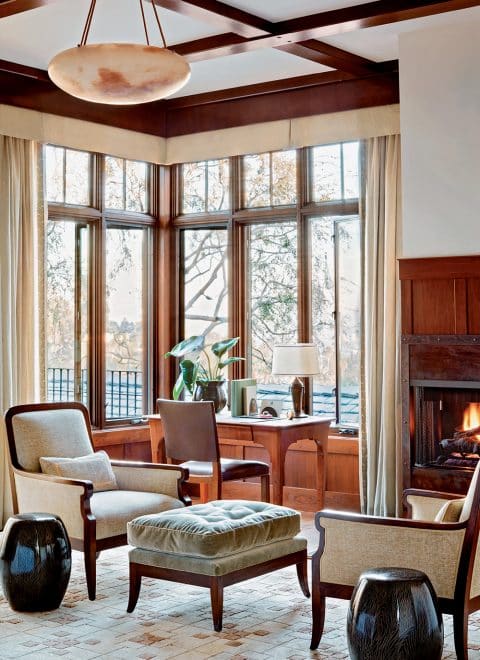 The master bedroom of a Los Angeles Arts and Crafts-style home features a seating area with custom chairs and ottoman and a 1920s Danish desk.

And she gets it, judging from her new book, No Place Like Home, published by Rizzoli. Six of the eight houses it features had been photographed before for magazines, but they were reshot for the book by Trevor Tondro, with Stuart styling the rooms herself. “I wanted to have control,” Stuart explains. “I went back to one house three times because I wasn’t satisfied with my own styling efforts, and I dragged Trevor back to Montana just to get some detail shots.” She also spent six months writing, and rewriting, the informative and often wry text.

This kind of perfectionism has won Stuart admirers like Mayer Rus, the West Coast editor of Architectural Digest. As Rus writes in the book’s introduction, “In a world where Pinterest scavengers masquerade as professional decorators, Madeline’s insistence on the old-school virtues of design artistry and craft is all the more refreshing.” Stuart deploys that artistry and craft in creating houses that hew to historical styles — Spanish revival, Arts and Crafts, Colonial, Art Deco — but never so closely that they become kitsch. “My mantra,” Stuart writes, “is ‘referential, not reverential.’ ” 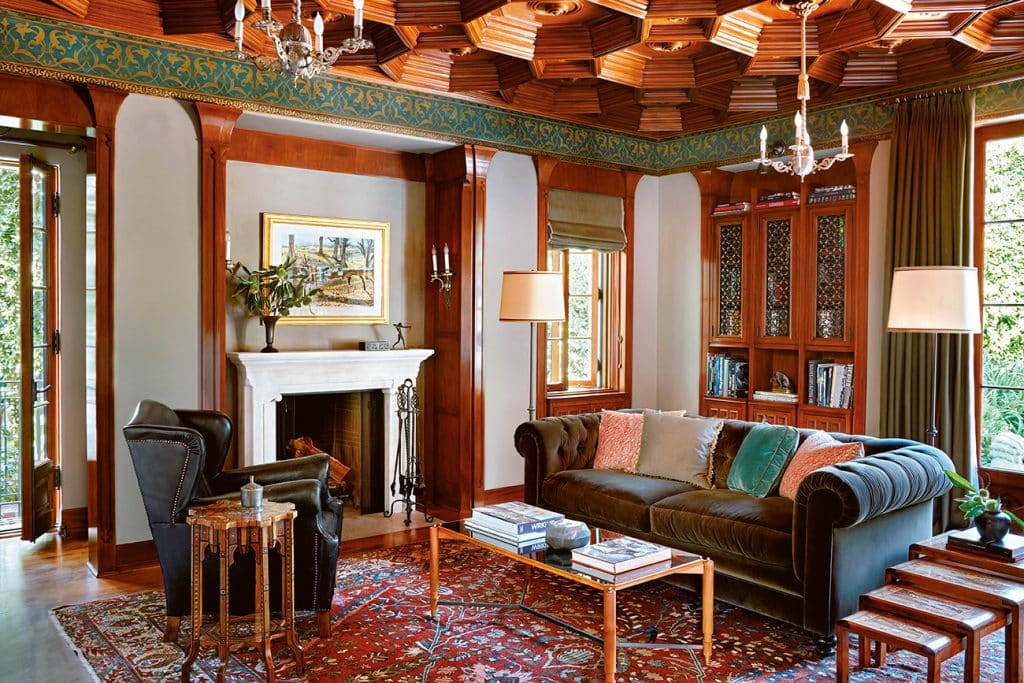 The iron and brass detailing on the bookcase doors was inspired by similar elements in William Randolph Hearst’s library at San Simeon. The 1930s coffee table is by Jules Leleu; the vintage leather armchair is Swedish. 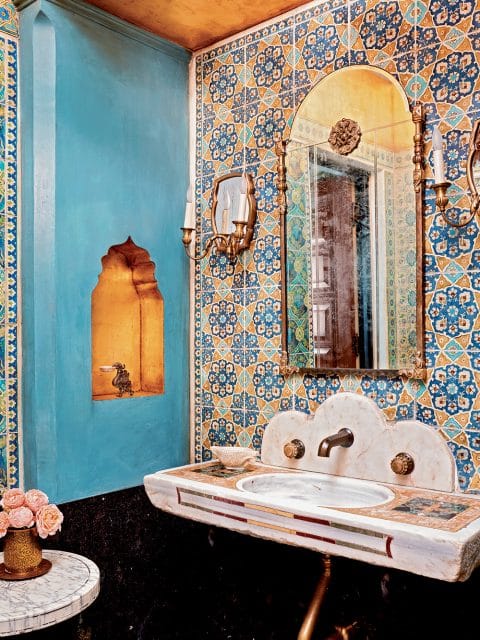 Artist Jean Horihata spent six months painting the walls of a Santa Monica home’s powder room to look as if they were covered in antique Iznik tiles. Faux-grouting and lacquer, to give a glazed effect, completed the illusion.

Perhaps the best example is a sprawling house — so big it has 18 bathrooms — in Santa Monica. It was designed by architect Kevin A. Clark to look like an “original” (meaning early-20th-century) Spanish revival house, and Stuart’s job was to create appropriate interiors. She did buy some Spanish pieces, but the New York–born, Beverly Hills–raised designer is geographically agnostic: The home office now features a desk made by Jules Leleu for a French bank president, while the “clubhouse” boasts a leather sofa studded with nailheads by Denmark’s Frits Henningsen, a coffee table by the École des Beaux-Arts–trained Mexican designer Arturo Pani and a 1920s zinc, marble and mahogany bar purchased in Argentina. “Luckily, I was born to shop,” says Stuart. Many interior elements, however, were made on-site. Artist Jean Horihata spent six months painting a powder room to look as if it were covered in antique Iznik (Turkish) tiles — Stuart reports that the man hired to hang the bathroom mirror insisted he needed a special drill bit for ceramics, even after being told the walls were painted plaster. Why didn’t she just use the genuine article? “One Iznik tile, if you could find one, would be several thousand dollars. And reproduction Iznik tiles never would have looked real,” explains the designer. Besides, “this was more fun.” 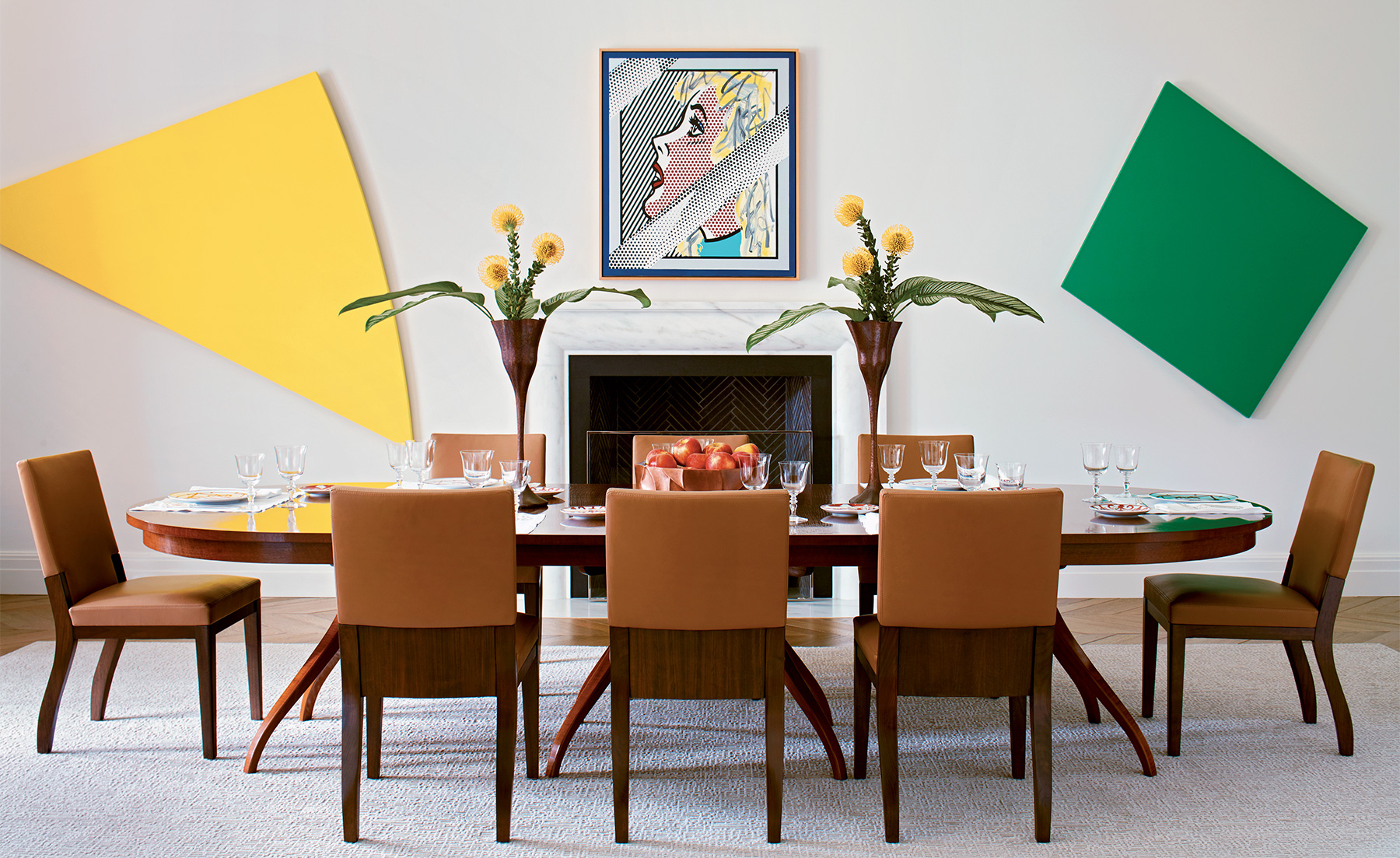 The dining room of an art-collecting couple, which was designed to fit 24 guests, features a Roy Lichtenstein work flanked by two shaped canvases by Ellsworth Kelly.

One of the styles most closely associated with Los Angeles is Arts and Crafts, an early-20th-century reaction to industrialization in which mortise-and-tenon joinery and other signs of the maker’s hand are given elegant expression. It has its apotheosis in the Gamble House in Pasadena, designed by the brothers Charles Sumner Greene and Henry Mather Greene. A client, inspired to build his own Arts and Crafts home after visiting this exemplar, brought Stuart in to design its interiors. Once again, she was ecumenical, outfitting the den with a Chinese coffee table, an English standing lamp, Japanese lanterns and French stools, along with hand-carved chairs and a chunky console table made in the 1920s by Swedish craftsman Axel Einar Hjorth. And she accessorized with American art pottery.

As is often the case, the smallest spaces pack the most punch. The client asked for separate men’s and women’s powder rooms. Stuart furnished both with vintage porcelain pedestal sinks, sconces modeled on Gamble House originals and fantastic tramp art mirrors made of scraps of wood. While the men’s room has walnut paneling, however, the women’s is enveloped in a pastoral mural, also by Horihata but this time inspired by a century-old German woodblock print. 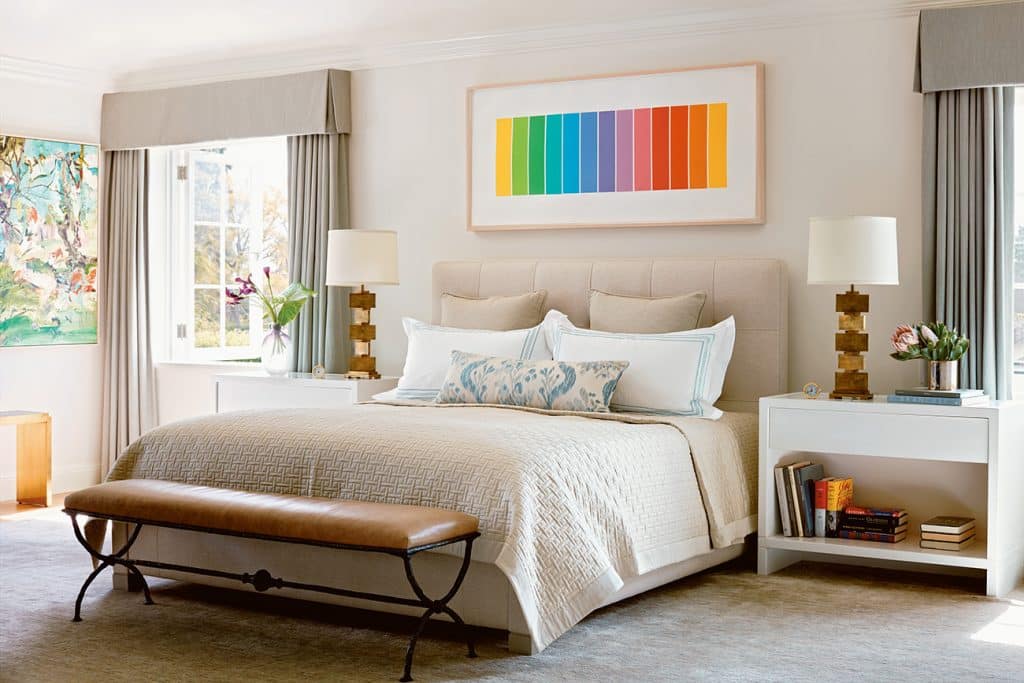 A Kelly color-spectrum painting pops against the subdued hues of the master bedroom of the art collectors’ home. The palette of soft colors serves as “a counterpoint to the bold and decisive use of color in the Ellsworth Kelly and Cecily Brown paintings that dominate the room,” Stuart writes.

Not every house in the book has an attributable style. One client asked Stuart to rescue what she says was the ugliest home in Jackson Hole, Wyoming: “a bad 1980s builder special” with many oddly shaped rooms. Describing the challenges this presented, Stuart writes, “It’s extremely difficult to furnish a space shaped like a tortilla chip.” Luckily, the house has spectacular views, which is why her client bought it in the first place. 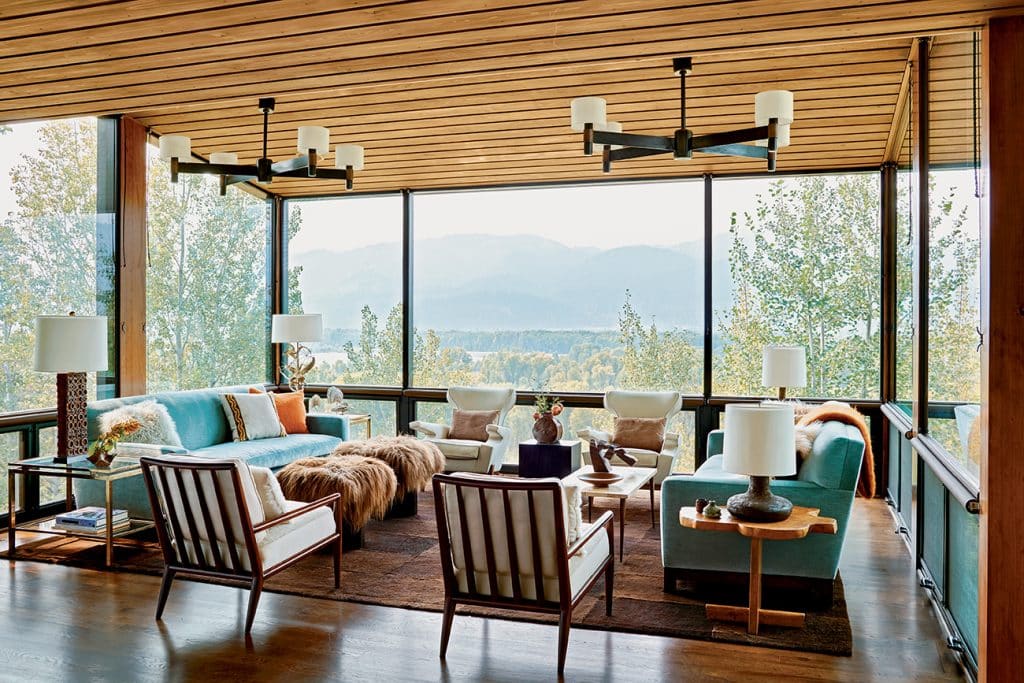 This living room in a Jackson, Wyoming, home “is essentially a glass-enclosed tree house that captures the exceptional views of the Snake River and the Teton Range in the distance,” Stuart writes. It features a pair of T.H. Robsjohn-Gibbings chairs (in the foreground) and a custom rug composed of squares of sheared fur.

David Lake, of the Texas architecture firm Lake|Flato, was brought in to rebuild the house in stages. Over a period of more than a decade, “[e]very single piece of the house was reworked,” reports Stuart, who, for her part, steered clear of Wyoming clichés in the decor: “No plaid. No antler chandeliers. No furniture made from logs or wagon wheels.” And, she writes, “with all due respect to the master interpreter of Western Style, we were determined to avoid the well-worn Ralph Lauren–inspired fantasies.” She deployed pieces by the likes of Paul McCobb and Philip and Kelvin LaVerne. Vintage Hans Wegner chairs surround the breakfast table. The library contains a 1960s Milo Baughman table and 1970s leather and rosewood chairs by the Brazilian master Sergio Rodrigues. Why such an urbane mix in a rural locale? Stuart explains that in creating a mélange of elements “not immediately identifiable as this or that,” she had a specific goal: “I didn’t want the house to be predictable.” 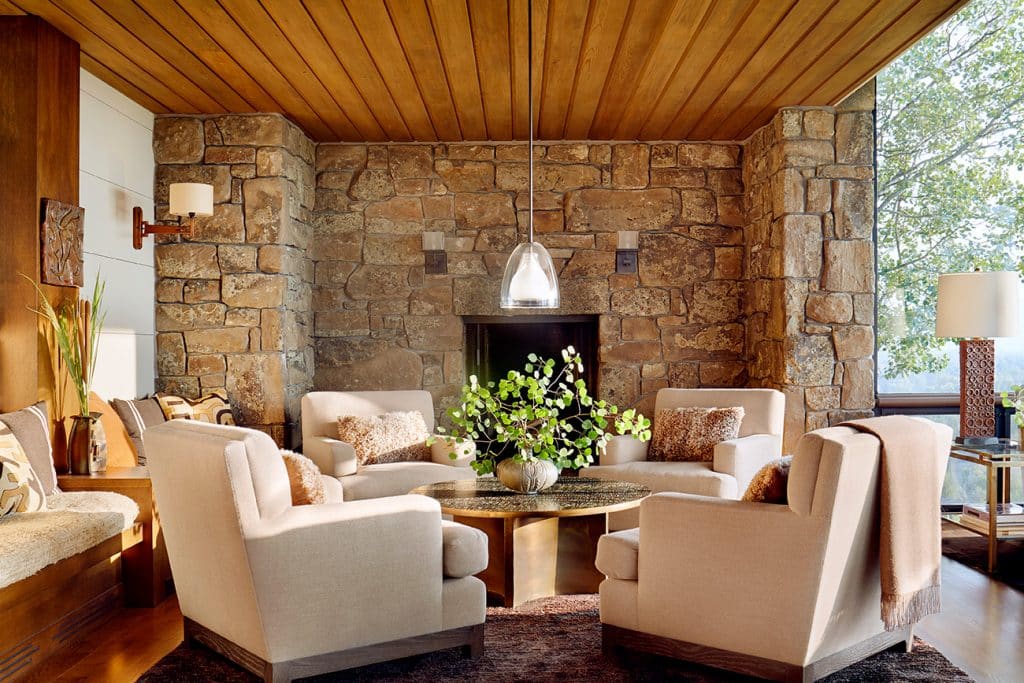 A set of custom armchairs surrounds a table by Philip and Kelvin LaVerne in the Jackson home. The space also features a stained-wood ceiling and moss-rock and painted-oak walls.

Some houses are stylistically distinctive on the outside but clean slates within. In a home that architect Marc Appleton created with a Georgian exterior, Stuart kept the interiors ornament-free — for a good reason. Her clients, she explains, are serious collectors of modern art and “desperately needed blank walls — big, open walls and lots of them.” She chose furniture that wouldn’t compete with paintings by Fernand Léger, Morris Louis, Frank Stella, Ellsworth Kelly, Roy Lichtenstein, Willem de Kooning and other 20th-century greats. But that didn’t mean avoiding the design world’s own big names. In one room, she positioned a tortoiseshell-lacquer parsons table by the great Jean-Michel Frank between a pair of Leleu chairs. Consoles by Jean Royère and Karl Springer enliven the hallways. The breakfast room is furnished, simply and elegantly, with a white Eero Saarinen tulip table and chairs. The pieces “are sophisticated and important but not waving their arms and saying, ‘Look at me. Look at me,’ ” she explains. “The furniture couldn’t be loud and boisterous.”

Stuart even left the windows uncovered. That, she writes with her usual dry humor, “was a real blow for someone who loves festooning fabrics as much as I do.” 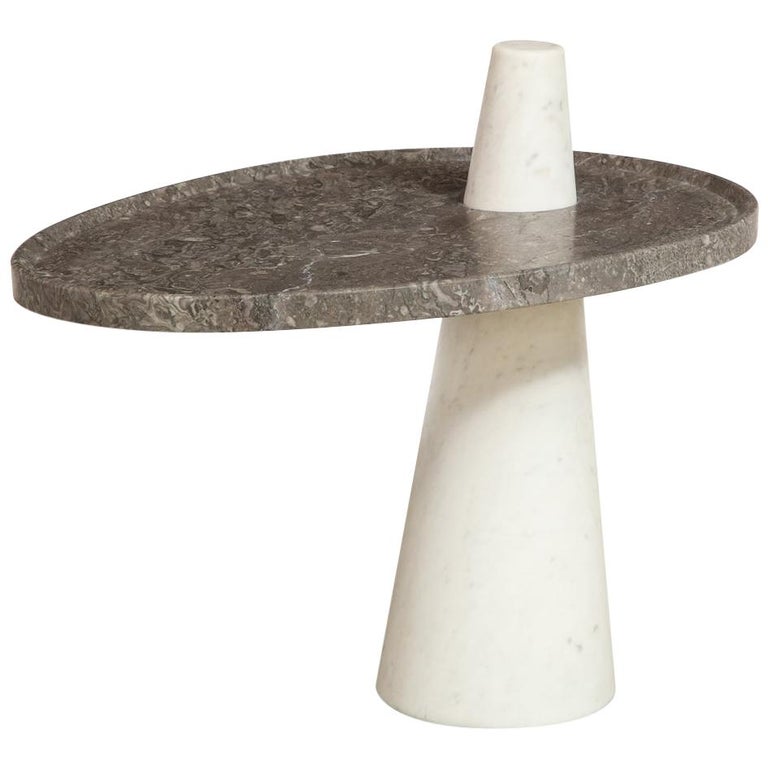 “I’m crazy about the elemental shapes combined in this marble side table designed by Paul Donzella. I’m using a pair of them as a coffee table — as the saying goes, two is better than one!” 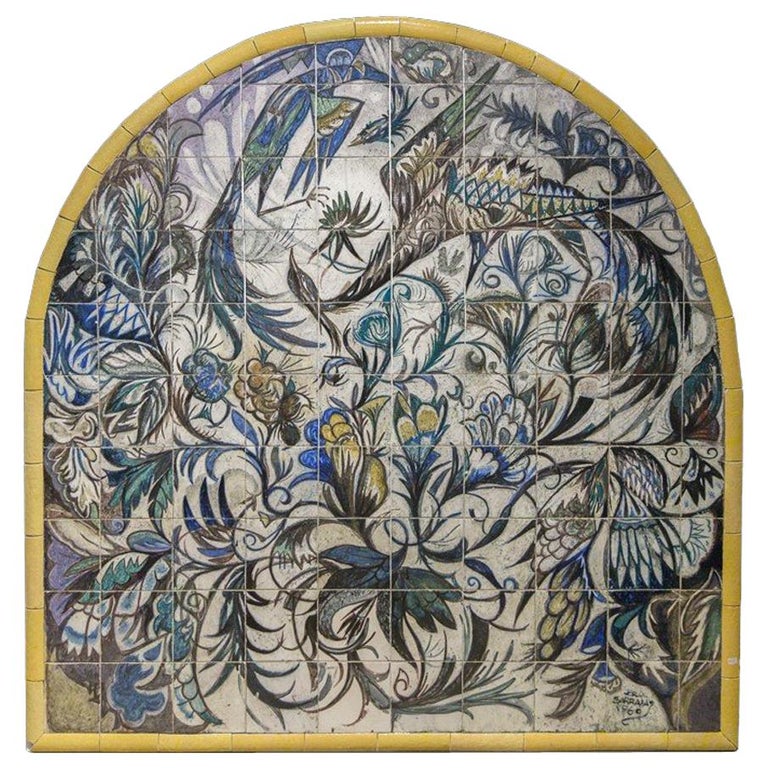 “I’ve been collecting tile murals for a client’s home, and this one is particularly fetching. We frame them in wrought iron and hang them on the exteriors walls or set them directly into the stucco of the Spanish Revival house.” 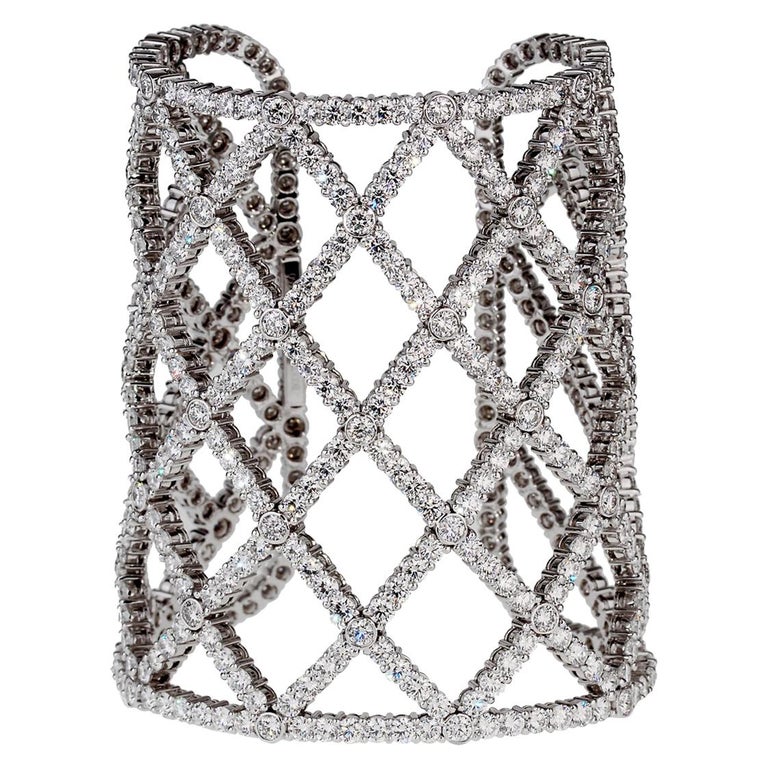 “What can I say? I like my bling with a bit or architectural oomph.” 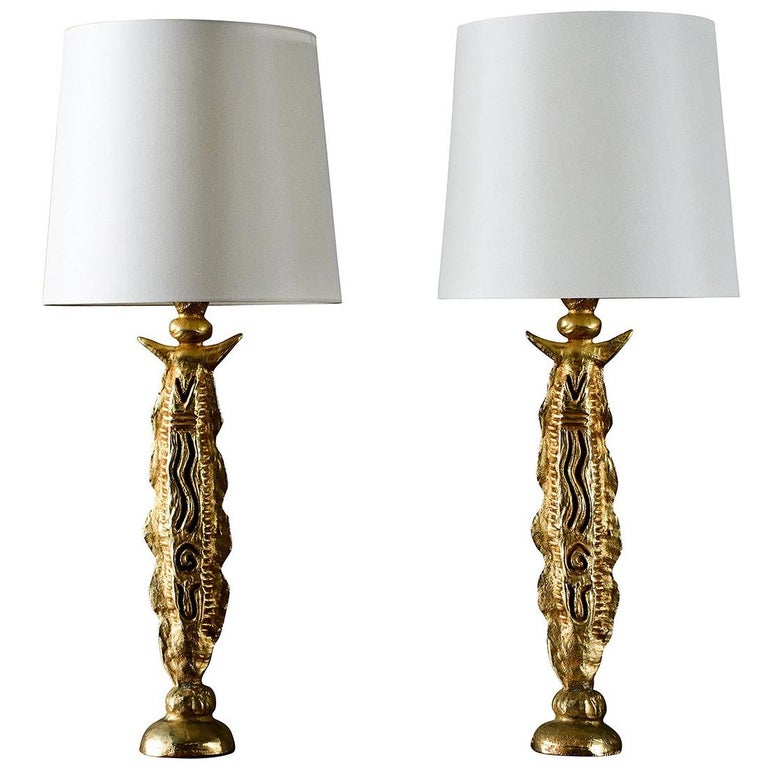 “Anyone familiar with my work knows I adore quirky lamps. Voilà!” 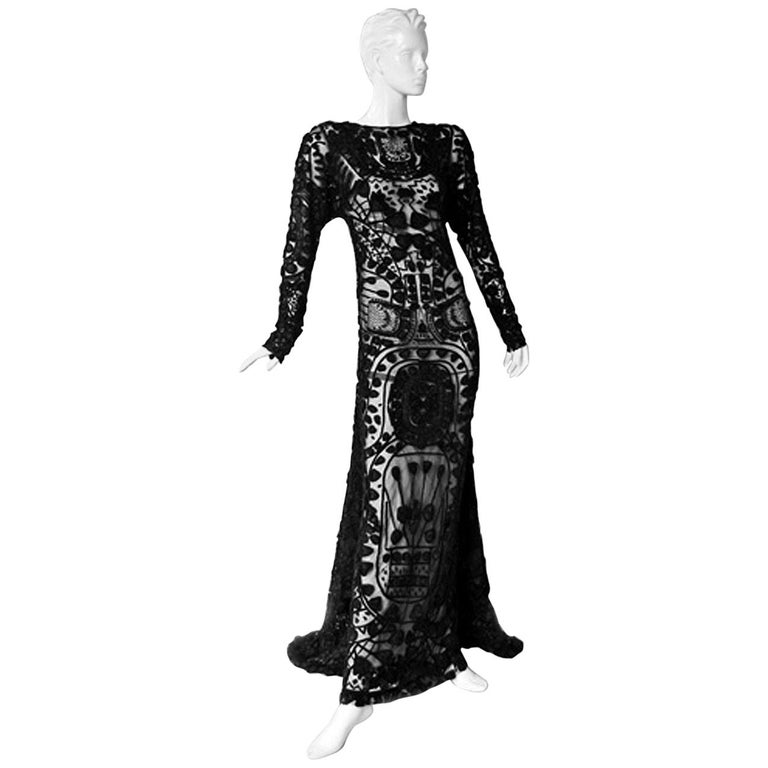 “I collect vintage clothing and am always looking for something chic and timeless. This Tom Ford dress is precisely that.” 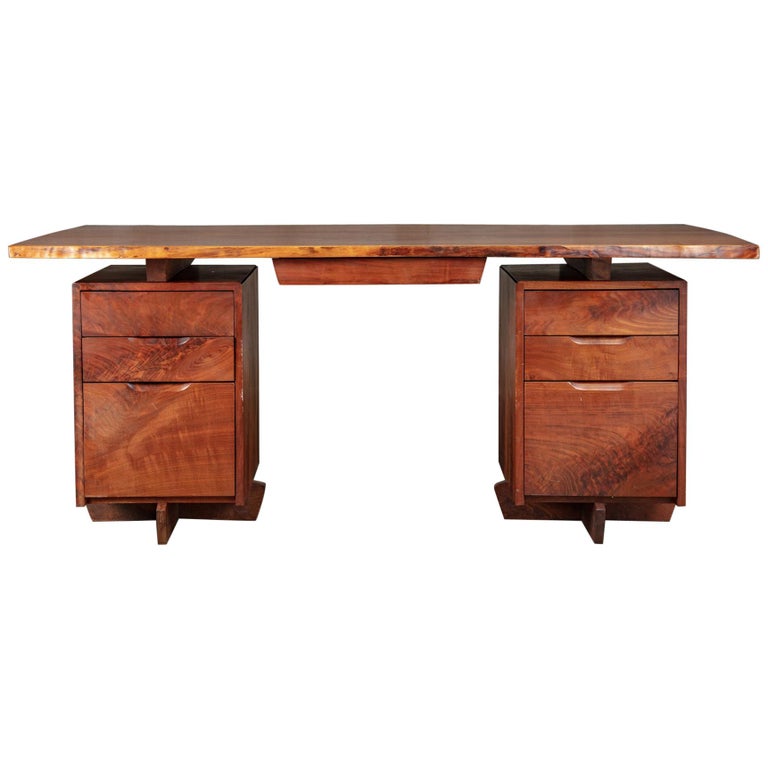 “One day, I hope to be able to buy a Nakashima piece of this significance for a client. Here’s the piece — now I just need the client!” 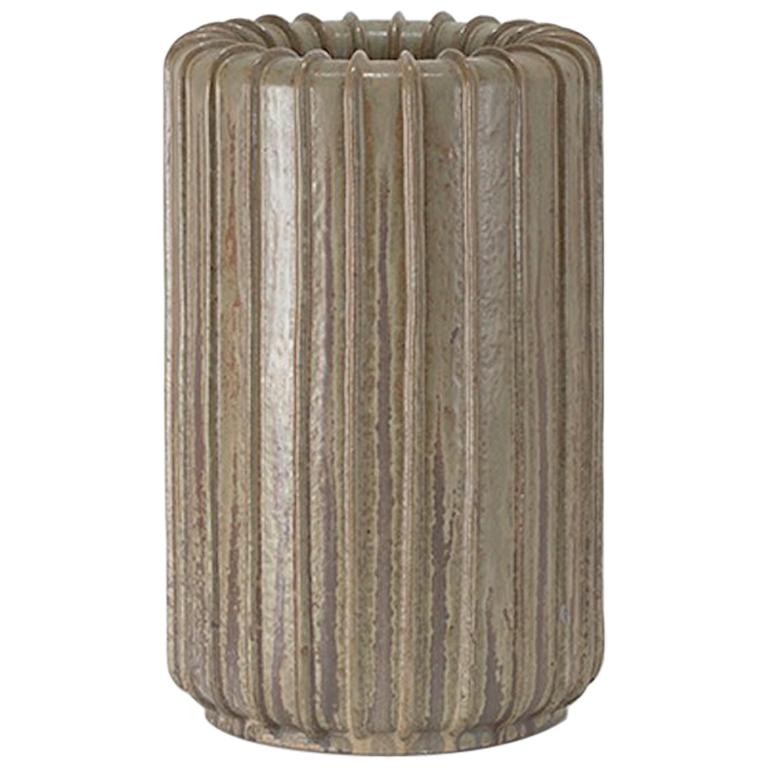 “I was lucky enough to find a small Arne Bang vase that I bought for myself years ago. I would love to add this piece to my collection of one!” 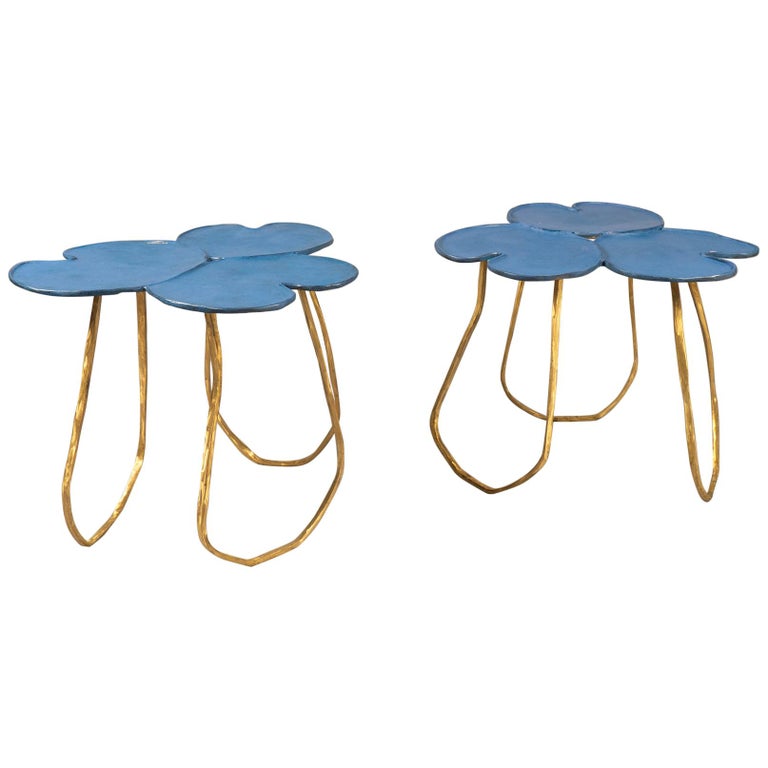 “Paula Swinnen is an exceptionally talented artist, and her works possess great charm combined with joie de vivre. You can’t help but smile when you look at these tables.”