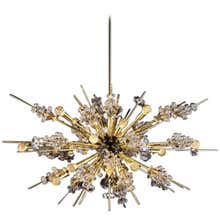 The venerable Austrian firm J. & L. Lobmeyr is one of the world’s premier glassware makers and purveyors, noted especially for its lighting and tableware designs. Headquartered in Vienna, Lobmeyr has won numerous illustrious commissions in its nearly two centuries in business, including the chandeliers for the Hapsburg monarchy’s Schönbrunn Palace, Lincoln Center — which is home to the Metropolitan Opera in New York City — and the Kennedy Center in Washington, D.C.

Lobmeyr is still family owned and managed. The company was founded by glass trader Josef Lobmeyr in 1823. It thrived during the long tenure of his son Ludwig, who built a network of manufacturers and artisanal workshops in Bohemia — central Europe’s revered glass-making region, now part of the Czech Republic — and earned imperial patronage. (He also collaborated with Thomas Edison to create the first electric chandelier, in 1883.) His nephew, Stefan Rath, who took over as head of Lobmeyr in 1917, introduced modernist design to the company repertoire, contracting with designers such as Josef Hoffmann, Adolf Loos, Otto Prutscher and Michael Powolny to create tableware.

Lobmeyr has never been married to a dominant in-house design type. The firm has produced chandeliers and sconces in styles as various as neo-Baroque, Rococo, neoclassical (or Louis XVI), Art Nouveau, minimalist and “sputnik” mid-century modern. As you will see from the offerings available on these pages, Lobmeyr can bring a sense of grandeur suitable to any décor.

Up to Two Lobmeyr Metropolitan Opera Sputnik Met Crystal Scones Flush Mounts
By J.L Lobmeyr
Located in Vienna, AT
Up to two custom-made Mid-Century met Sputnik lights, designed and executed by J. & L. Lobmeyr, Austria. To be used as wall lights or ceiling lights. Each light has a round nickel-pl...
Category

Sunburst Chandelier by Lobmeyr
By J.L Lobmeyr
Located in Vienna, AT
Brass frame, gold plated with eight arms fitted with each E14 Sockets and many glass crystals. Made in Austria in the 1960 by Lobmeyr.
Category

Original, Large, Oswald Haerdtl Lobmeyr Mid-Century Modern Crystal Chandelier
By Oswald Haerdtl, Woka Lamps, J.L Lobmeyr
Located in Vienna, AT
Sensational found from the 1950s. Brilliant chandelier with high quality hangings and brass-covered iron-frame and stem. Mirror on the bottom. The total drop is 116cm, the stem can b...
Category

Lobmeyr 'Fruit' Chandelier Pendant Light, Glass Gilt Metal, 1950s
By J.L Lobmeyr
Located in Hausmannstätten, AT
A chandelier from the 'fruit'-series by J. & L. Lobmeyr, Austria, Vienna, manufactured in Mid-Century, circa 1950. It is made of leaf gold plated metal frame decorated with colorful...
Category

Lobmeyr Chandelier 'Ambassador', Oswald Haerdtl, Brass Glass, Austria, 1955
By J.L Lobmeyr, Oswald Haerdtl
Located in Hausmannstätten, AT
A fantastic and rare chandelier designed by Oswald Haerdtl in 1955 for J. & L. Lobmeyr, Vienna. The grace and loftiness of Haerdtls early works made him to one of the most importan...
Category

Original Lobmeyr Zahn Mid-Century Modern Hand Cut Crystal Chandelier
By J. & L. Lobmeyr Company, Woka Lamps, J.L Lobmeyr
Located in Vienna, AT
Very decorative chandelier from a retail-store in Vienna from the 1960ies Hand-cut crystall glasses and a stem decorated with a passementerie Suitable for the US.
Category

Very Rare Glass Chandelier in the Style of Lobmeyr, circa 1950s

Monumental Lobmeyr Flush Mount Light, Brass Nickel Crystal Glass, 1975
By J.L Lobmeyr
Located in Hausmannstätten, AT
A huge flush mount chandelier by J.L. Lobmeyr, Austria, Vienna, manufactured in midcentury, in 1975. This fixture is one of only a few custom made pieces for the foyer of the Hilton...
Category

Crystal Chandelier by Oswald Haerdtl for J.L Lobmeyr
By J.L Lobmeyr
Located in Vienna, AT
Brass construction gold-plated with crystals element fitted with six E14 porcelain sockets. Made by J.L. Lobmeyr in Vienna in the 1960s.
Category

Lobmeyr 'Fruit' Chandelier Pendant Light, Glass Gilt Metal, 1950s
By J.L Lobmeyr
Located in Hausmannstätten, AT
A chandelier from the 'fruit'-series by J. & L. Lobmeyr, Austria, Vienna, manufactured in midcentury, circa 1950. It is made of leaf gold plated metal frame decorated with colorful ...
Category

Lobmeyr furniture is available for sale on 1stDibs. These distinctive objects are frequently made of metal and designed with extraordinary care. There are many choices in our collection of J. & L. Lobmeyr furniture, although beige editions of this piece are particularly popular. 79 vintage editions of these items are in stock, while there are 20 modern editions to choose from as well. Many of the original furniture by J. L. Lobmeyr were created in Europe during the 20th century in the Mid-Century Modern style. Many customers also consider furniture by J. & L. Lobmeyr Company, Prof. Friedl Bakalowits and Swarovski if you are looking for additional options. Prices for J. & L. Lobmeyr furniture can differ depending upon size, time period and other attributes. The price for these items starts at $1,036 and tops out at $260,000, while pieces like these can sell for $6,715 on average.